One of the hardest decisions to make in any Animal Crossing game is figuring out what to name your town. In Animal Crossing: New Horizons the stakes are even higher, as players need to name an entire island. But one redditor pointed out something very interesting that might change the way you name your new home.

It turns out that villagers don’t refer to the place as “[Town Name] Island”. Instead, they simply call it “Town Name.” For example, if you name your island “Survivor” it will only be called “Survivor,” not “Survivor Island.” It’s a minor detail but one that has big implications. 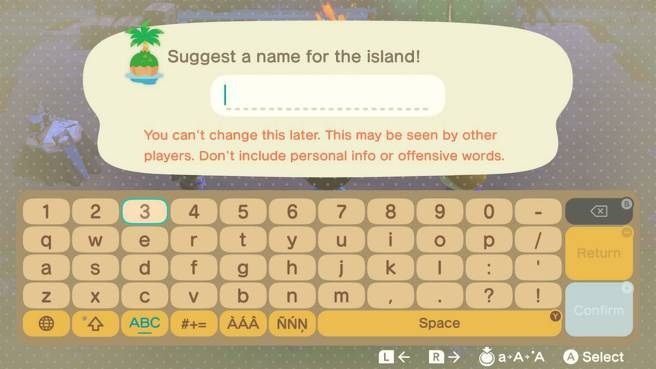 This means that if you want to have your island referred to as an “island” you’ll have to find a way to cram it into the ten-character-limited naming system. Another redditor pointed out that instead of typing out “Island” when naming your home, you can shorten it to “Isle” and save a few characters. It would have been nice if this was pointed out before the naming process began, as player’s will be stuck with their decision unless they delete the entire save file.

Although it’s a pretty chill game, the whole naming process is bound to bring players a bit of anxiety. It’s one of the few permanent decisions in Animal Crossing and with that comes a lot of pressure. If you’re not feeling up to the task, we’d recommend letting this awesome Island Name Generator do the work for you. Most of the names are actually pretty good, such as Bellis, Linzae, and Moreey. It’s got around 10,000 names to dole out so feel free to mess around with it and get inspired.

You could also take the easy route and just name it after a preexisting location. Sure, it might not be very original, but it would be pretty cool running around a little island called “The Shire.”

No matter what you settle on, just remember that villagers won’t call it an island unless it’s part of the name.