Hear from CIOs, CTOs, and other C-level and senior execs on data and AI strategies at the Future of Work Summit this January 12, 2022. Learn more

New research from Veritas Technologies highlights the damage that workplace blame cultures are having on the success of enterprise cloud adoption. Not only did 56% of those surveyed admit they’ve accidentally deleted files hosted in the cloud, but as many as one in five said they do so multiple times per week.

The situation in the U.S. is only slightly better than it is globally, with 50% of US office workers admitting to having accidentally deleted files hosted in the cloud. The number of those who do so multiple times a week remained consistent.

However, U.S. office workers appear more willing to lie to cover up their mistakes — 43% of U.S. respondents said they’ve lied to hide the fact that they accidentally deleted data stored in shared cloud drives, versus 35% globally. 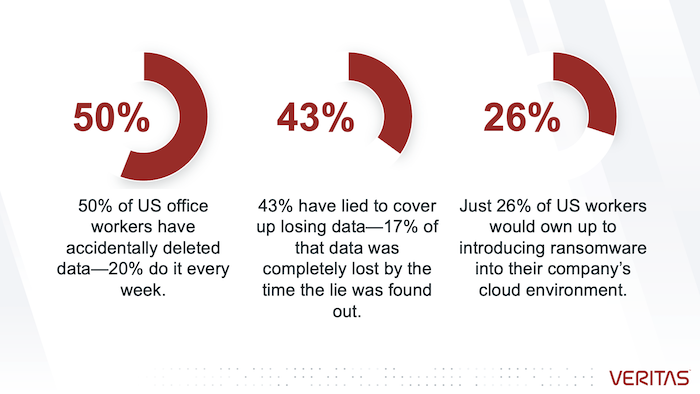 Owning up to accidentally allowing ransomware into their organizations is also a problem. Just 26% of U.S. respondents said they’d immediately confess mistakes that introduced ransomware — again, slightly worse than the global result of 30%.

This is problematic. There’s often only a short window where businesses can act to minimize the impact of deleting, corrupting, or encrypting the cloud-based data they increasingly rely on. In fact, more than half (51%) of U.S. office workers said they’ve accidentally lost a cloud-based file and were never able to get it back.

“Businesses need to help, not blame, employees when data is lost or encrypted by hackers as a result of employee action,” said Simon Jelley, general manager of SaaS protection at Veritas Technologies. “Leaders need to motivate employees to come forward as soon as possible so IT teams can act fast to take remedial action. It’s clear that shaming and punishment are not ideal ways to do that.”

The report from Veritas Technologies is based on a survey of 11,500 officer workers in nine countries.