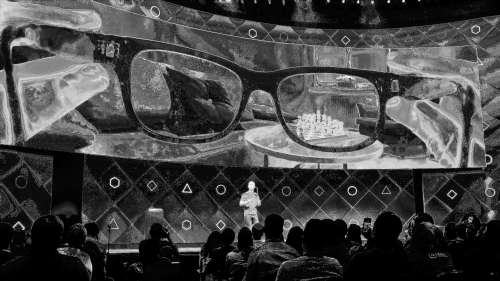 Meta no longer plans release the AR glasses slated for 2024 to consumers, The Information and The Verge report.

At the Connect 2021 conference in October Meta announced Project Nazare, “our first full augmented reality glasses”. The company didn’t show a prototype or even real footage, instead showing a brief “simulated” concept clip.

“We still have a ways to go with Nazare, but we’re making good progress,” Mark Zuckerberg remarked.

In April The Verge’s Alex Heath released a report detailing Meta’s apparent plans for glasses over the next six years. Heath reported Project Nazare would launch in 2024. It apparently weighs 100 grams, around four times normal glasses, and resembles Clark Kent’s thick black frames. Nazare will apparently have a battery life of just 4 hours and be powered by an included wireless puck which can fit in your pocket. The original target field of view was 70 degrees, but “that goal likely won’t be met” Heath wrote.

In May Reuters reported CTO Andrew Bosworth told staffers in the Reality Labs hardware division the company “could not afford to do some projects anymore and would have to postpone others”.

At the time of the April report Heath noted that the expensive components – including eye tracking cameras, custom waveguides, and microLED projectors – would drive Nazare’s price to “multiple thousands of dollars”, so it would be a niche product aimed at early adopters and developers. But both The Information and Heath now report Nazare will not be sold as a product at all. The Information describes Nazare’s new purpose as a “a demonstration product”, whereas Heath says Meta will “distribute them to developers”.

In that same April report, Heath wrote Meta planned second generation AR glasses for 2026 and a third generation for 2028. The Information’s new report says that second generation is codenamed Artemis, and will now be the first to commercially launch. Heath describes Artemis as having “a less bulky design and more advanced display technology”.

Meta still plans to release cheaper non-AR smart glasses codenamed Hypernova as early as next year, which will pair with your smartphone to display notifications and contextually useful information in a small heads up display, Heath writes. In May Mark Zuckerberg met with the billionaire founder and chairman of Luxottica – the Italian company behind brands like Ray-Ban and Oakley – to plan “new smart glasses”. Hypernova may be a new generation of Ray-Ban Stories, adding a HUD. The current product does not have a display.

The shifting plans come amid widespread reports of general cost cutting at Meta, apparently due to slowing revenue growth and threat of a looming recession. This week Bloomberg reported Meta halted development of a smartwatch with cameras, and The Information reports the company will not make any more Portal video calling appliances for consumers.

Interestingly, The Information & Heath offer different reasons for the smartwatch cancelation. The Information wrote that Meta struggled with “the difficulty of making a watch that users could unclip without dropping it” and the battery wasn’t lasting a full day. But Heath says the detachable design made it difficult to integrate the EMG tech for controlling AR glasses with neural signals, writing that Meta “has pivoted to focus fully on a design that better supports EMG on the wrist”.

“As is common in our industry, we iterate on multiple prototypes in parallel & shift resources as we learn,” he wrote.