The original Resident Evil 3 wasn’t particularly puzzle heavy, but they were at least a constant presence. Not so in the 2020 remake. Resident Evil 3’s remake plays up the action at the expense of puzzle solving, leaving little for players to mentally chew on. That said, there are a few puzzles that might stump players – especially if they don’t thoroughly explore Raccoon City. The Subway Station Monument is the first major puzzle Jill runs into in Resident Evil 3, requiring exploration of Raccoon City to complete fully.

Unlocking the Subway Station Monument in Resident Evil 3 requires three gemstones hidden inside of Fancy Boxes. While players are bound to run into at least one Fancy Box through natural gameplay, the rest are hidden off the story path and can be a pain to get if you miss them early on. Do too much before hunting down the remaining gems and Nemesis will start hunting down Jill. Taking the time to unlock the Monument is worth it, though, offering items that make the rest of Resident Evil 3 more manageable. 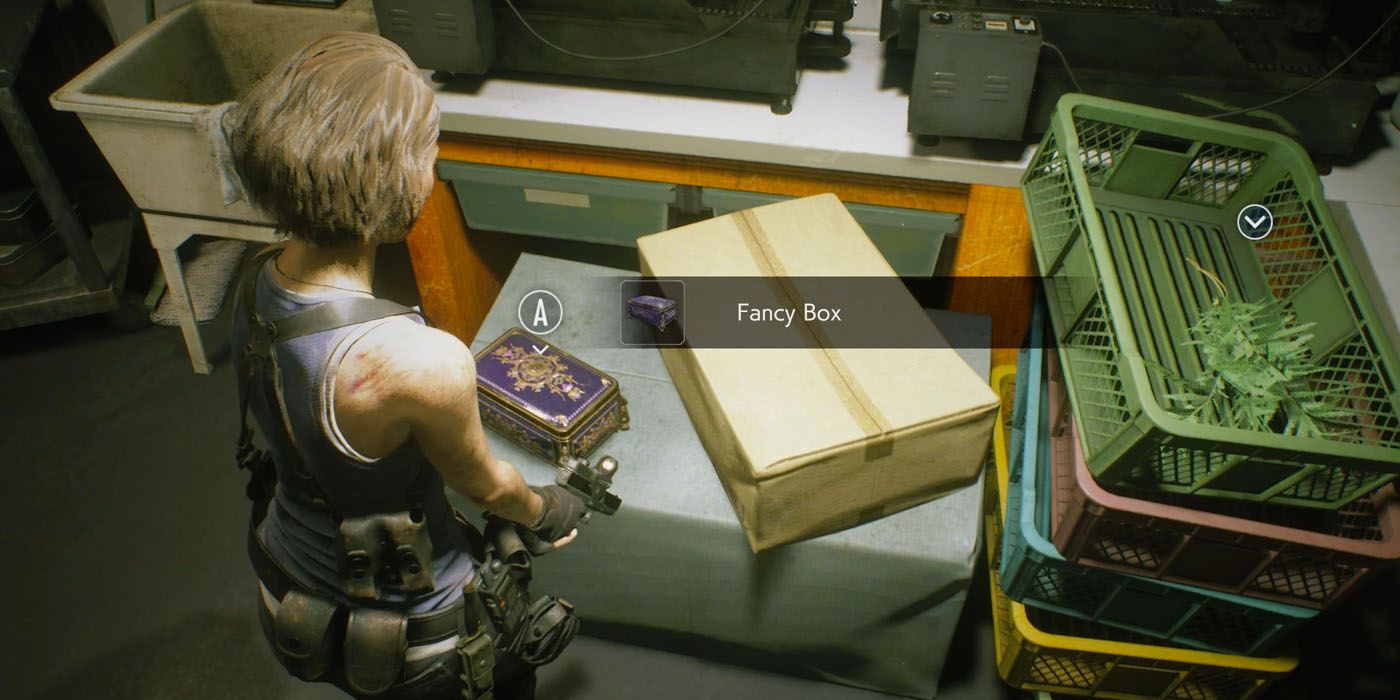 The Fancy Box hiding the Red Jewel will more than likely be the first gemstone players find in Resident Evil 3. All three gemstones are actually in close vicinity to the first safe room in the game, but only the Red Jewel can be found without needing a different item to find it. From the Subway Ticket Station, players need to walk down Main Avenue so the zombies blocking the Shopping Plaza tear down the gate.

Jill will now be able to explore the rest of Raccoon City through here. The Shopping Plaza connects through a donut shop and a fire escape that leads to housing & a shortcut. After clearing out the zombies in the plaza below, enter Moon’s Donuts straight ahead. The donut shop has no enemies, but does feature a safe room with a Fancy Box. If examined, Jill can open the Fancy Box to nab herself the Red Jewel. 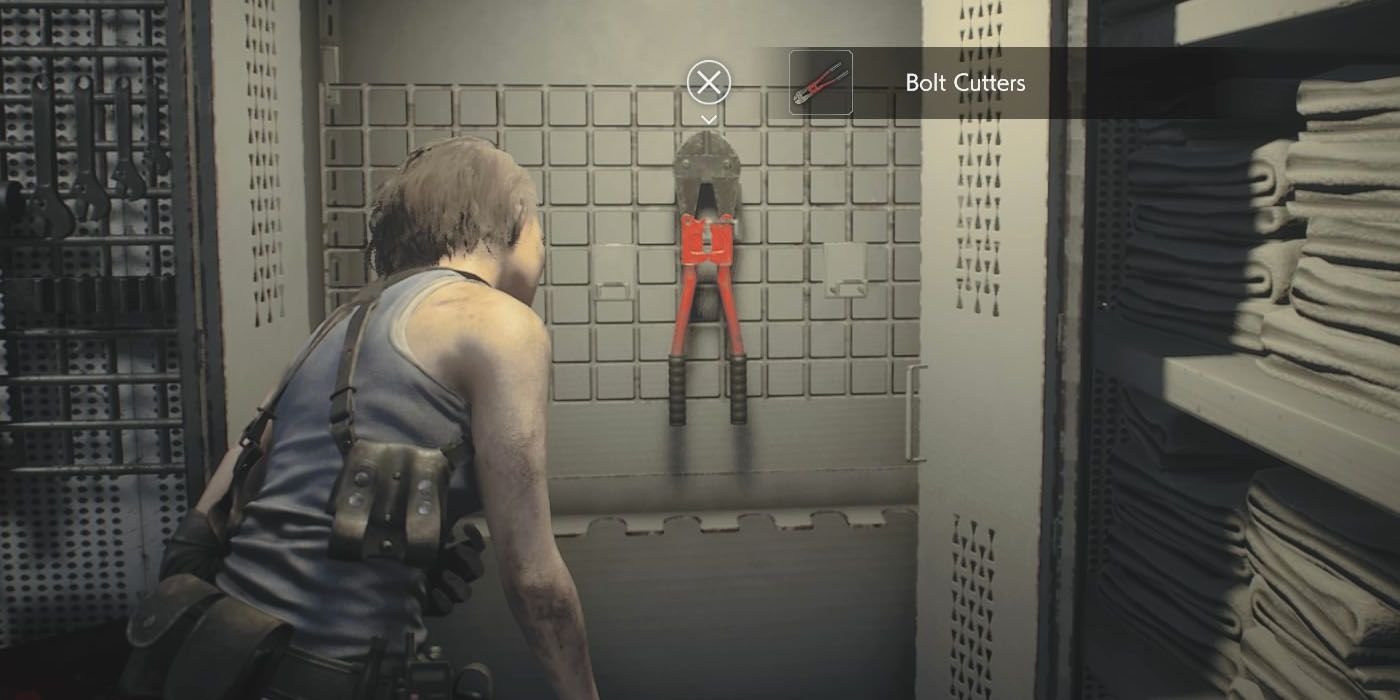 The next two gemstones can only be obtained after Jill finds the Bolt Cutters and Lockpick respectively. From Moon’s Donuts, exit towards the doors into a new part of Raccoon City. Clear out any zombies in your immediate vicinity and head into the Subway Office. A zombie will come stumbling down the hallway, so be prepared to headshot it.

With the zombie killed, explore the rest of the area to find a Fire Hose laying on the ground. Jill can bring this Fire Hose back to Main Avenue and connect it to a hydrant, allowing her to put out the fire blocking off the rest of Raccoon City. With the fire cleared, enter the Garage and grab the Bolt Cutters off the wall. Before booking it towards the Blue Jewel, however, unlock the Garage Door to trigger a cutscene. 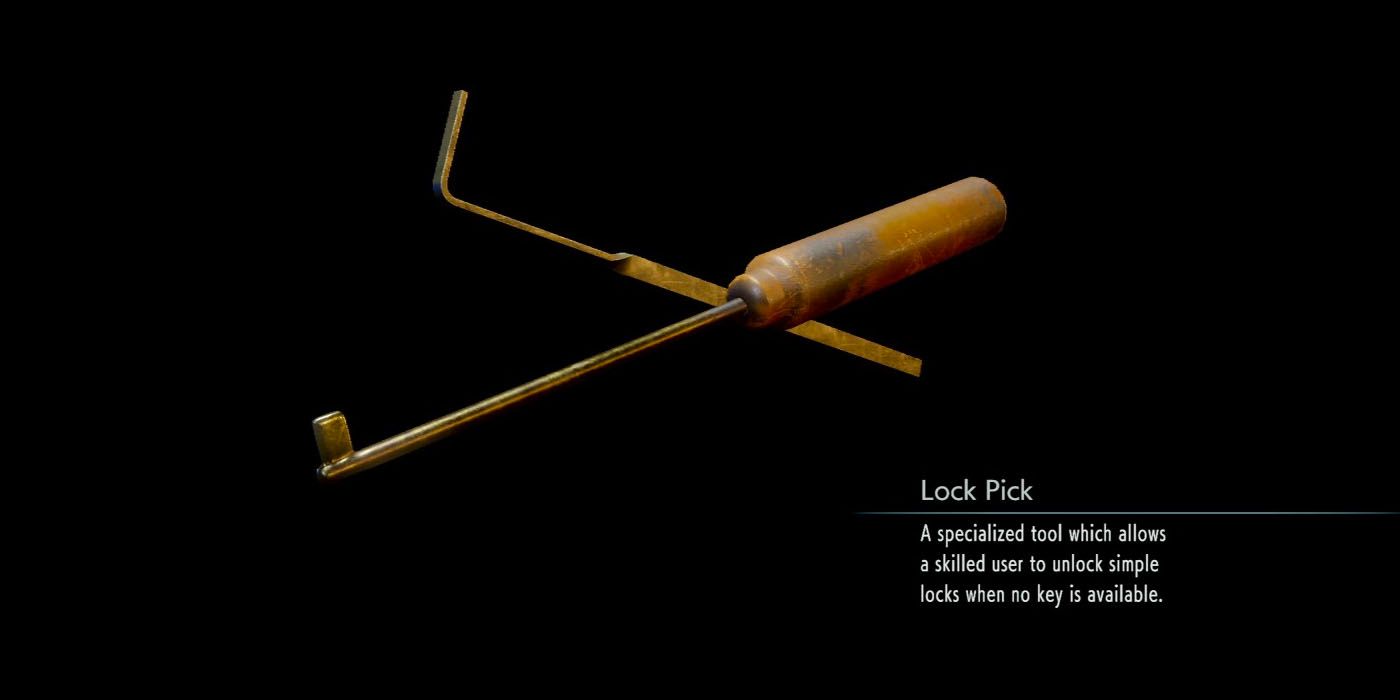 After the cutscene, push on ahead through the Back Alley. Two zombified dogs will be ready to ambush Jill, but there’s a conveniently placed Power Generator that can fry both dogs with the right timing. Enter the Subway Power Substation and take out the three zombies wandering around the entrance.

Head upstairs to find a safe room and make room at the Item Box if you need to. Exit towards the Outdoor Area and inspect the zombie clutching a case all the way in the corner. Inside the case is a Lockpick that’ll let players explore the rest of Raccoon City. Make sure you don’t unlock the nearby door for now and head back inside the Substation. 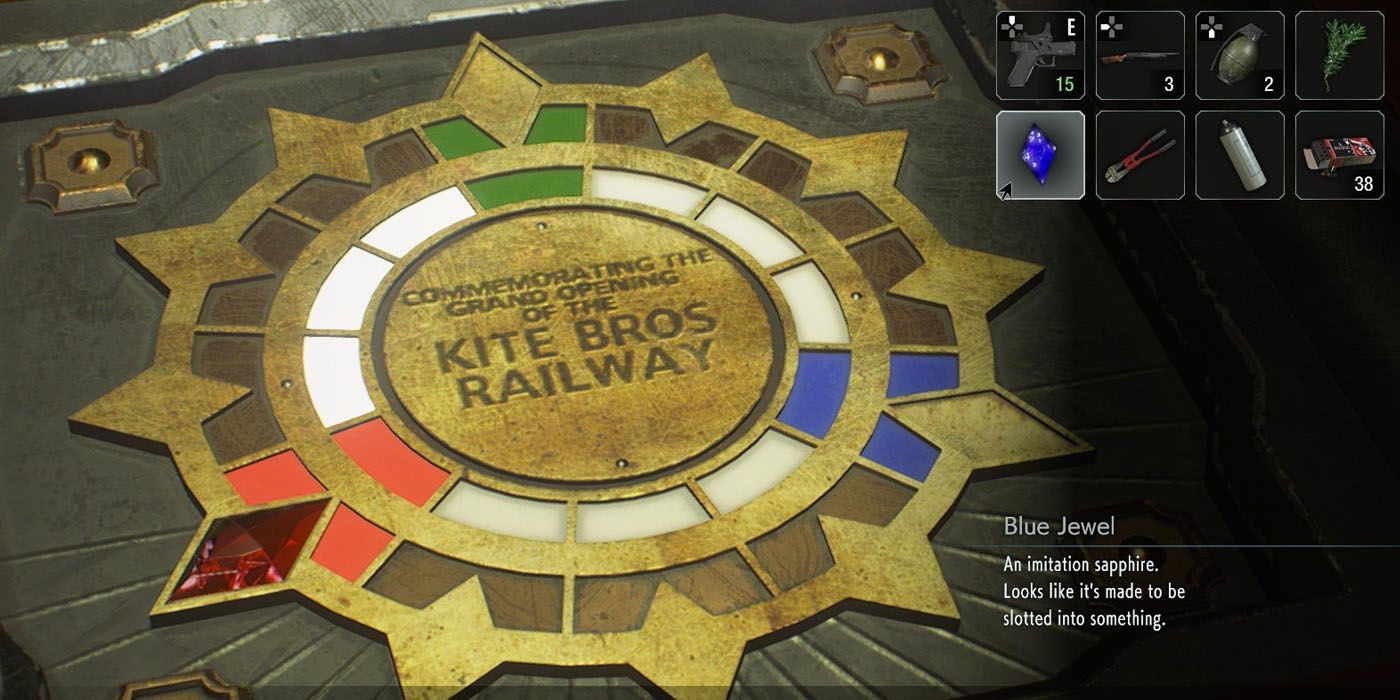 You’ll need to return to Main Avenue to find the remaining two gemstones, but Raccoon City should be more or less cleared out at this point. The Blue Jewel can be found inside of the Supermarket. Cut open the chains holding the door shut with the Bolt Cutters and the Fancy Box will be waiting inside. Examine the Box like before to claim the Red Jewel. Jill can also find High-Grade Gunpowder and a First Aid Spray in her immediate vicinity – both incredibly useful for the upcoming battles against Nemesis. 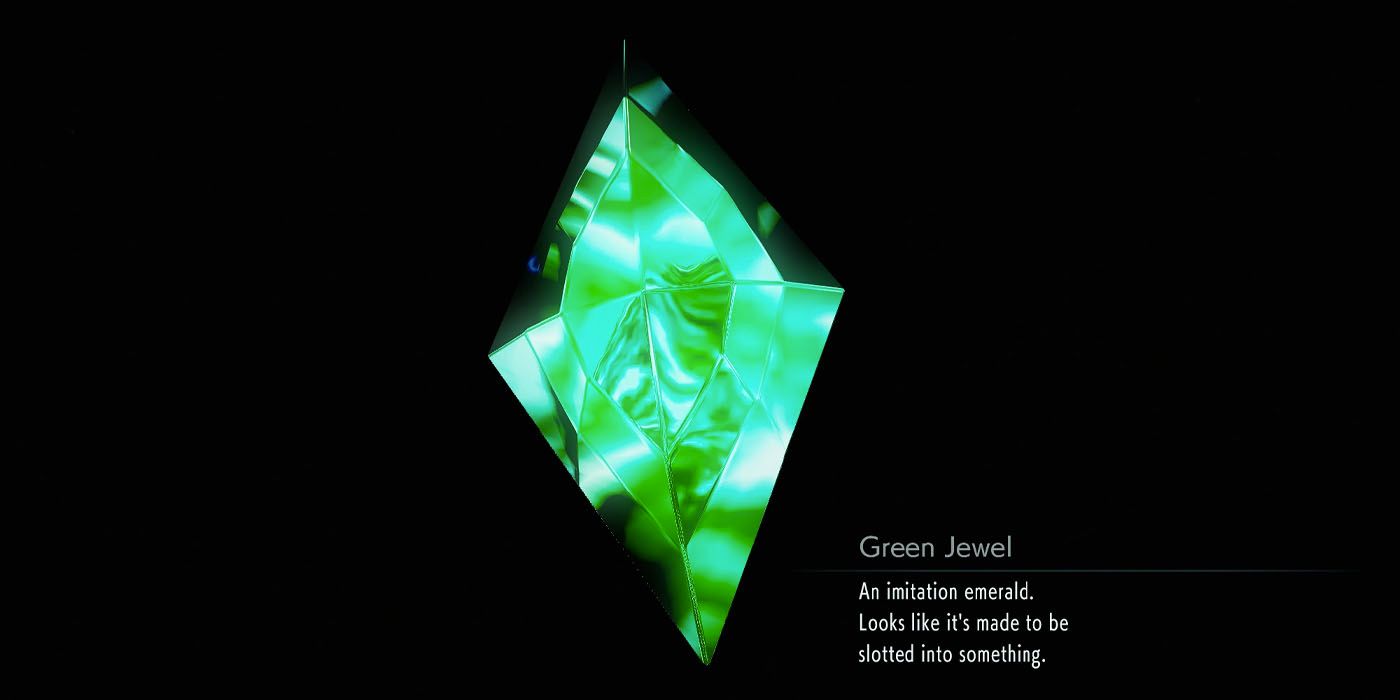 The Fancy Box holding the Green Jewel can actually be found right across the street from the Supermarket. Book it over to the Toy Shop and pick the front lock with the Lockpick. The Fancy Box is displayed on a counter. Open it up to grab the Green Jewel, the final piece of the Subway Station Monument puzzle. Before leaving, make sure to read the Charlie Doll pamphlet and shoot the Charlie Doll in the corner. 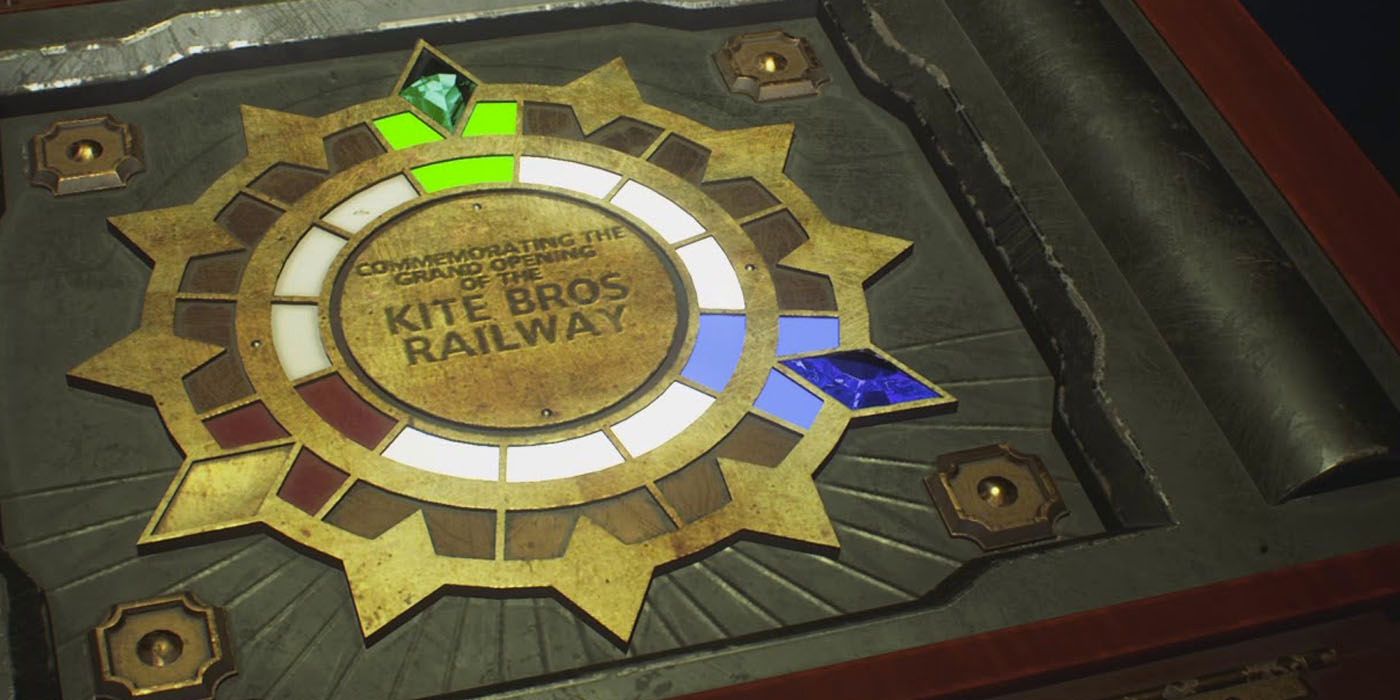 With all three Jewels on hand, it’s just a matter of heading back to the Subway Ticket Gate and slotting each gemstone into place. Jewel colors don’t actually matter when it comes to Monument rewards, the items dispensed simply based on how many Jewels are currently slotted in. Jill’s rewards are:

The Grenade comes in handy fighting Nemesis, the Tactical Stock buffs the Shotgun (already one of Jill’s better weapons in Resident Evil 3), and the Hip Pouch increases Jill’s inventory space by two slots. All things considered, taking the time to solve the Subway Station Monument is worth it.

Next: How To Dodge In Resident Evil 3 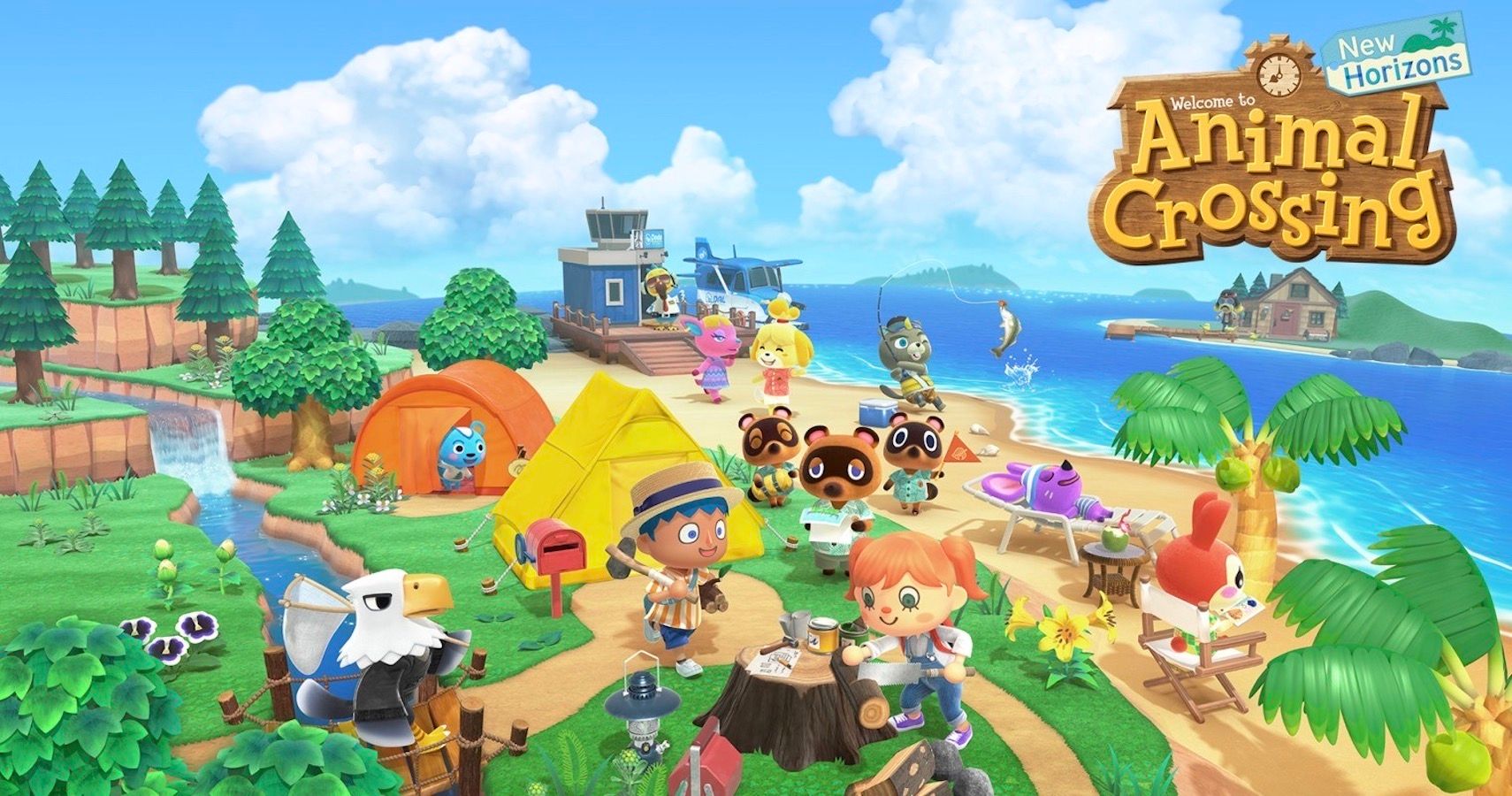