Heisenberg is Resident Evil Village at its most ridiculous and bombastic. The boss battle is a chaotic showdown between Ethan Winters and an infected man who transforms himself into a gooey mess of flesh and machinery, willing to throw everything at the fool who refuses to help him take down Mother Miranda. That’s you, by the way.

Luckily, Ethan Winters is more than ready for such a battle. Taking place shortly after reuniting with Chris Redfield, you now are in possession of a makeshift vehicle equipped with machine guns, a missile launcher, and even a chainsaw. With this at your disposal, the ensuing conflict is awash with explosions, foul language and set-pieces that feel utterly ridiculous – but somehow, they work.

If you’re having trouble with taking Heisenberg down, we’ve compiled a guide on how to defeat the Nicolas Cage-esque villain and push through to the end of the campaign. Get your chainsaws ready, it’s time to take this spectacled fool for a ride.

How To Beat Heisenberg in Resident Evil Village

Take a look around the surrounding area where the cutscene with Chris took place and pick up any remaining ammo and resources that haven’t been pilfered. Before you board the vehicle, have a read of the laptop for some interesting lore tidbits. 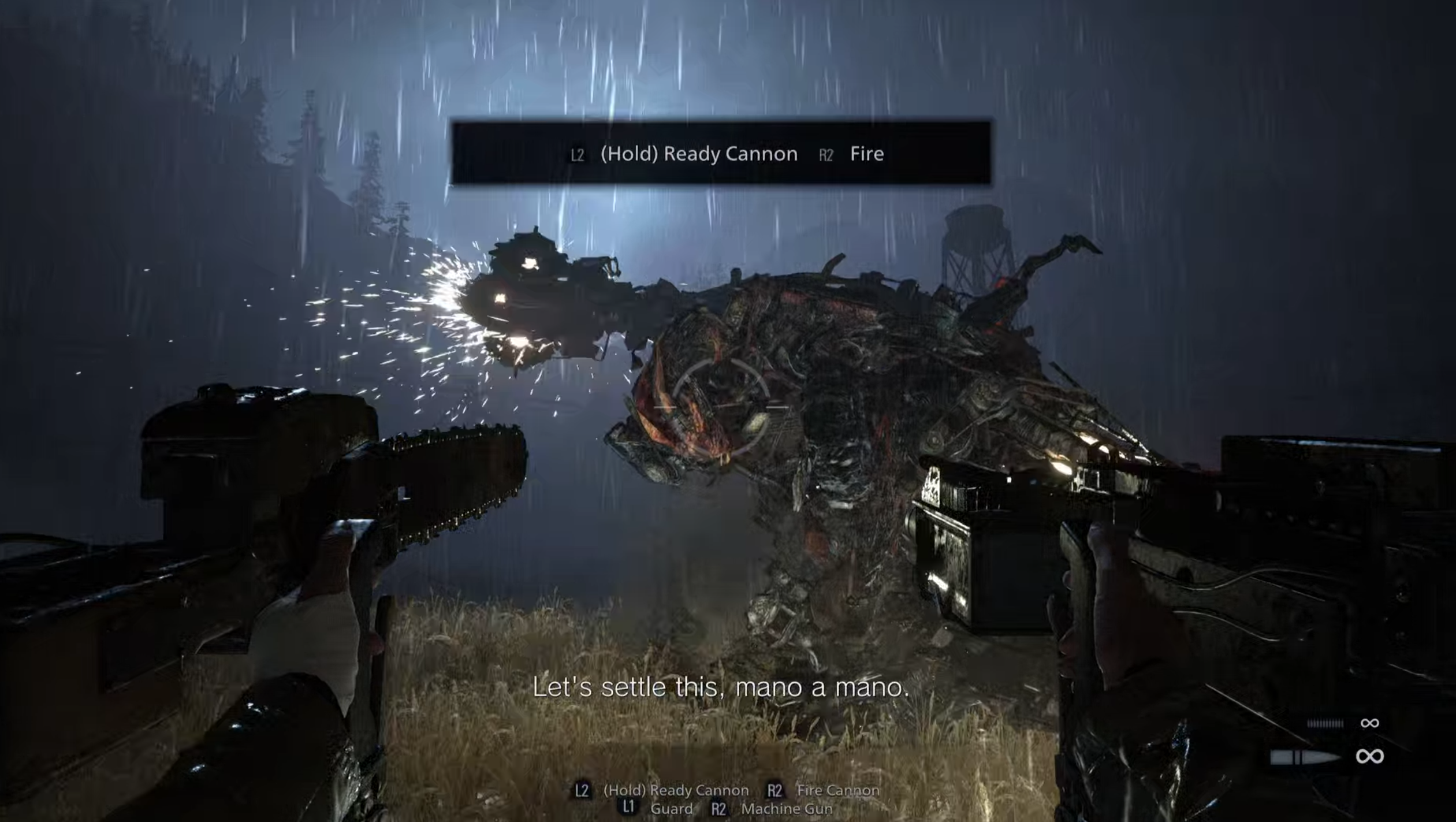 Seconds after riding the elevator up to the surface, Heisenberg will label you as a cockroach and jump into the arena. There’s loads of space to move around here, so just keep strafing and focusing fire on the fleshier parts of his mechanical body. His arms are also massive weak points, with red lights indicating exactly where you need to target.

Bright sparks will erupt to indicate you’re firing in the right place, so keep this up until Heisenberg summons a metal shield to protect himself. Simply move around the arena and try to find an opening, assaulting it with machine gun fire or even a cheeky missile when the opportunity arises. Keep in mind that the latter takes a while to reload, so try and be sparing in its usage, or just save it for when it really matters. 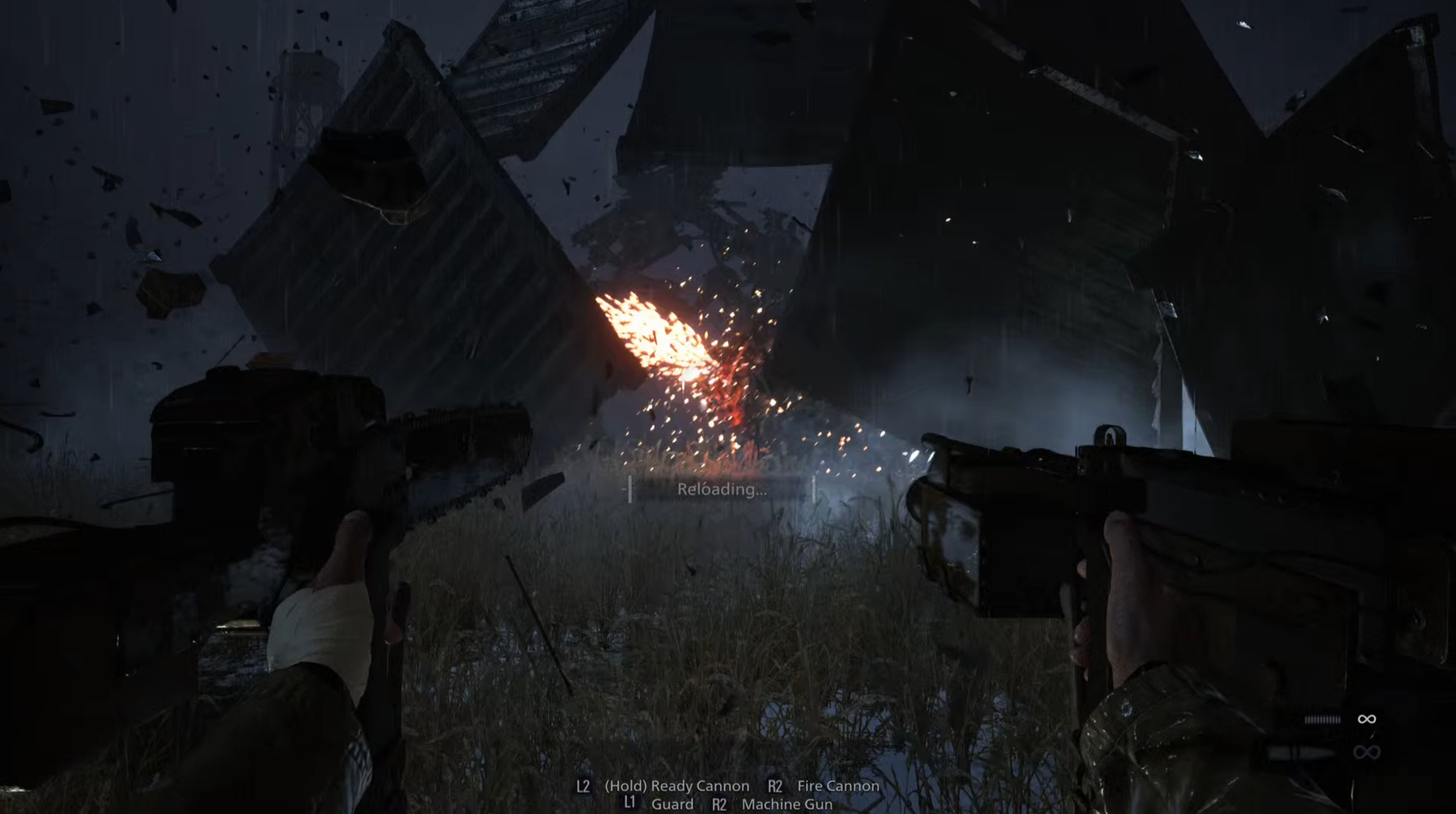 Once enough punishment has been dealt, Heisenberg will explode his shield outward, resulting in giant pieces of metal piercing into the ground. For this next section, keep focusing fire on his arms and head while remembering to hide behind the aforementioned debris when he rushes forward with a lunging attack. Projectiles will also be fired toward you in the form of drills, but these are easier to destroy with a bit of gunfire.

He’s also likely to waddle up to you for a close encounter, so just dodge his attacks and keep firing, and be aware that missile attacks are likely to cause extra damage at such a range. Following this attack, he will retreat to his shield a second time and continue the cycle until enough damage has been done. You’ll know the battle is taking a turn when he begins almost crawling away, moving slower and slower with each passing bullet. 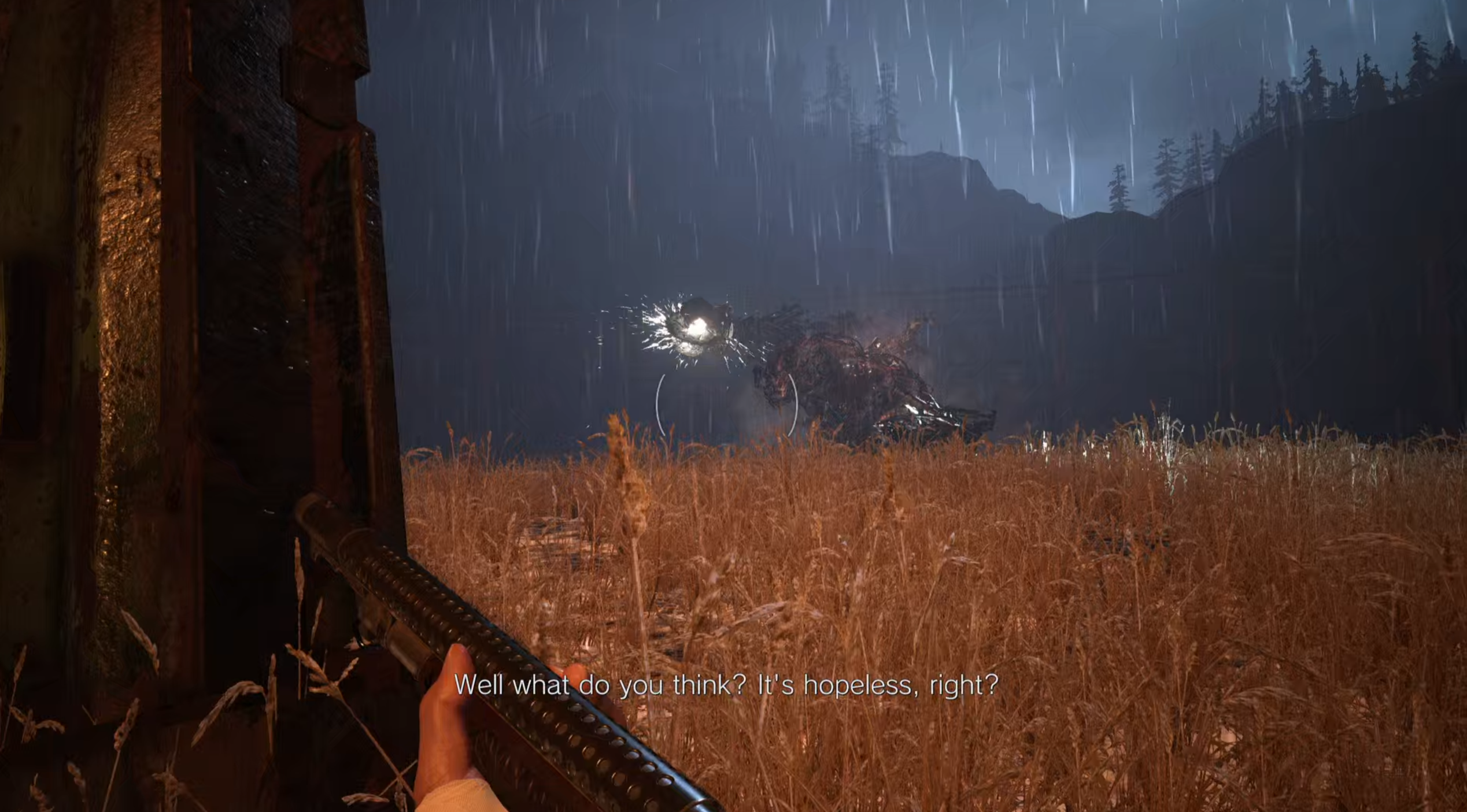 As a last resort, Heisenberg will summon a sword made of metal and debris and swing it towards you. Ethan will now be locked into a cutscene that will see him fly out of the vehicle and land onto the ground below. Now you are helpless, and must rely on your own weapons to take him down. Immediately run behind the metal barriers located across the arena in search of cover and ammunition, while occasionally peeking out to fire at Heisenberg’s weak points.

Once all of the cover is depleted, put on a brave face and take him on directly. He’s so big that attacks are trivial to dodge, so equip your shotgun and fire away. Do enough damage and he’ll explode into several pieces before charging up one final attack as you’re sucked into the air. Because this game is stupid, all you need to do now is hop back into the vehicle when the game asks you to and fire a missile to finish the job.