Who doesn't want to be a pirate? Whether a newcomer or an old hat, Return to Monkey Island gives you a lot to mess around with and explore. It's the whole adventure game experience, melding a new, colorful aesthetic with the gameplay many of us are familiar with from our childhoods. Or, you know, from the modern resurgence of adventure-style games.

Return to Monkey Island is vibrant, nostalgic, and, most of all, fun. It's easy to pick up and play, and a great way to get familiar with one of gaming's classic series. 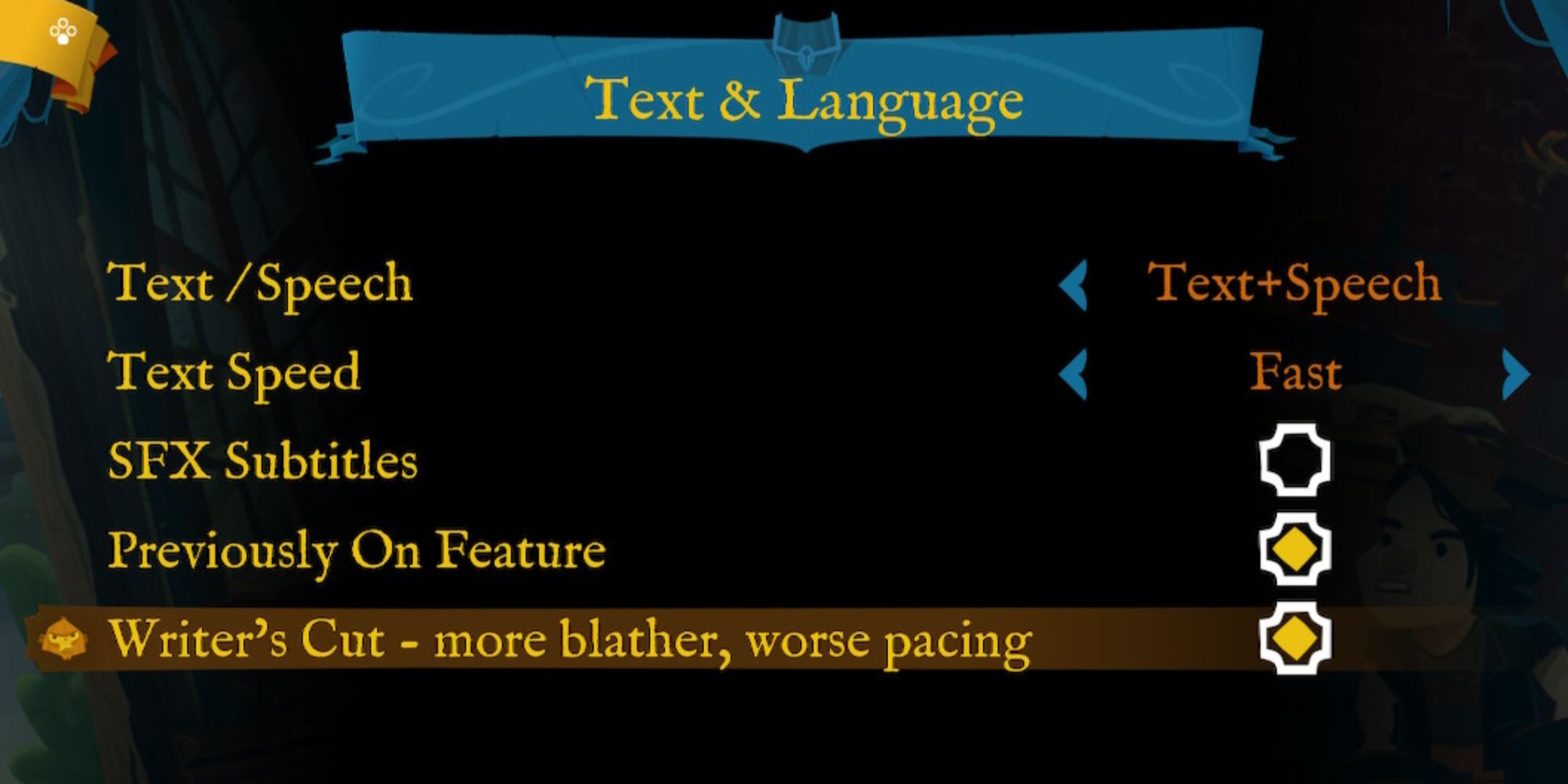 "More blather, worse pacing" is the promise of the unique, somewhat hidden option called Writer's Cut, offered to you in the Text and Languages menu. And what a tempting option it is! Let's be honest — no one is coming to Monkey Island for a quick-paced story. We all want the legit adventure game experience, with all the extras and story content we can get. Unless you're a literal small child (like, under eight), there's no reason to want a streamlined experience.

Besides, the Writer's Cut option hides a lot of cool stuff behind it. Some characters and conversations won't appear unless you have it on, so it's well worth it from a story perspective. But, really, we all just want to bask in the snappy writing and fun turn-of-phrase that the Writer's Cut showers us with. 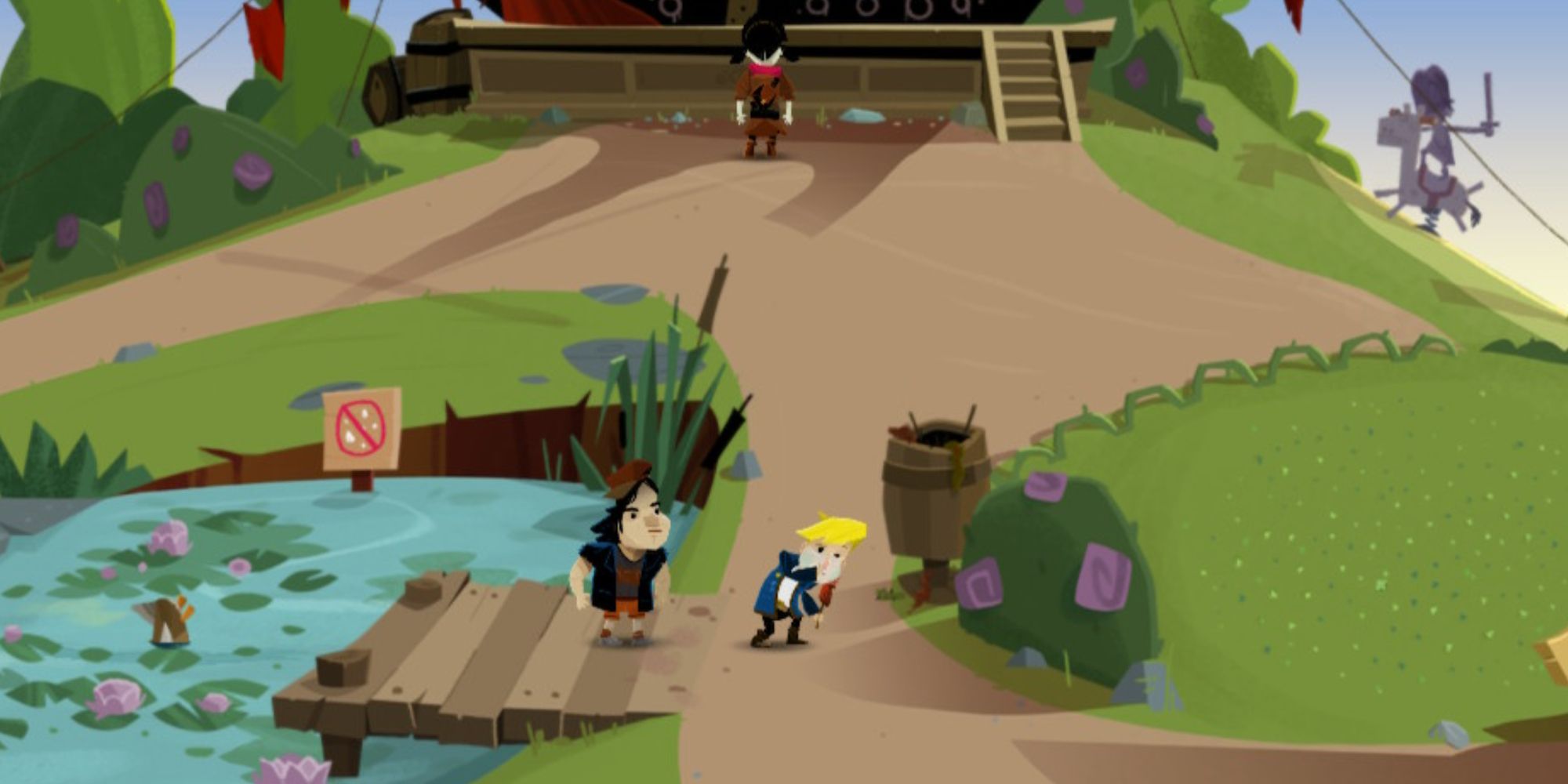 The scurvydog, at the best of times, looks absolutely disgusting. Why Boybrush and his friend, Chuckie, would go so far out of their way to get this snack raises enough questions, yet they covet these dubious delicacies. Scurvydogs, if you were to ask Chuckie and Boybrush, are serious business.

Not serious enough that you can't ruin the things, though. After discovering something that you and Chuckie agree is probably ketchup, he helpfully says you should put it on your scurvydog. And hey, it's an adventure game, so adding things to other things is part of the fun! But you don't stop your sinful actions by just adding Mysterious Red Substance to your scurvydog. No, you make poor Boybrush eat the awful thing. And so you both learn a valuable lesson: just because you can, doesn't mean you should.

6/8 Trying To Get The Low-Down On The Lore 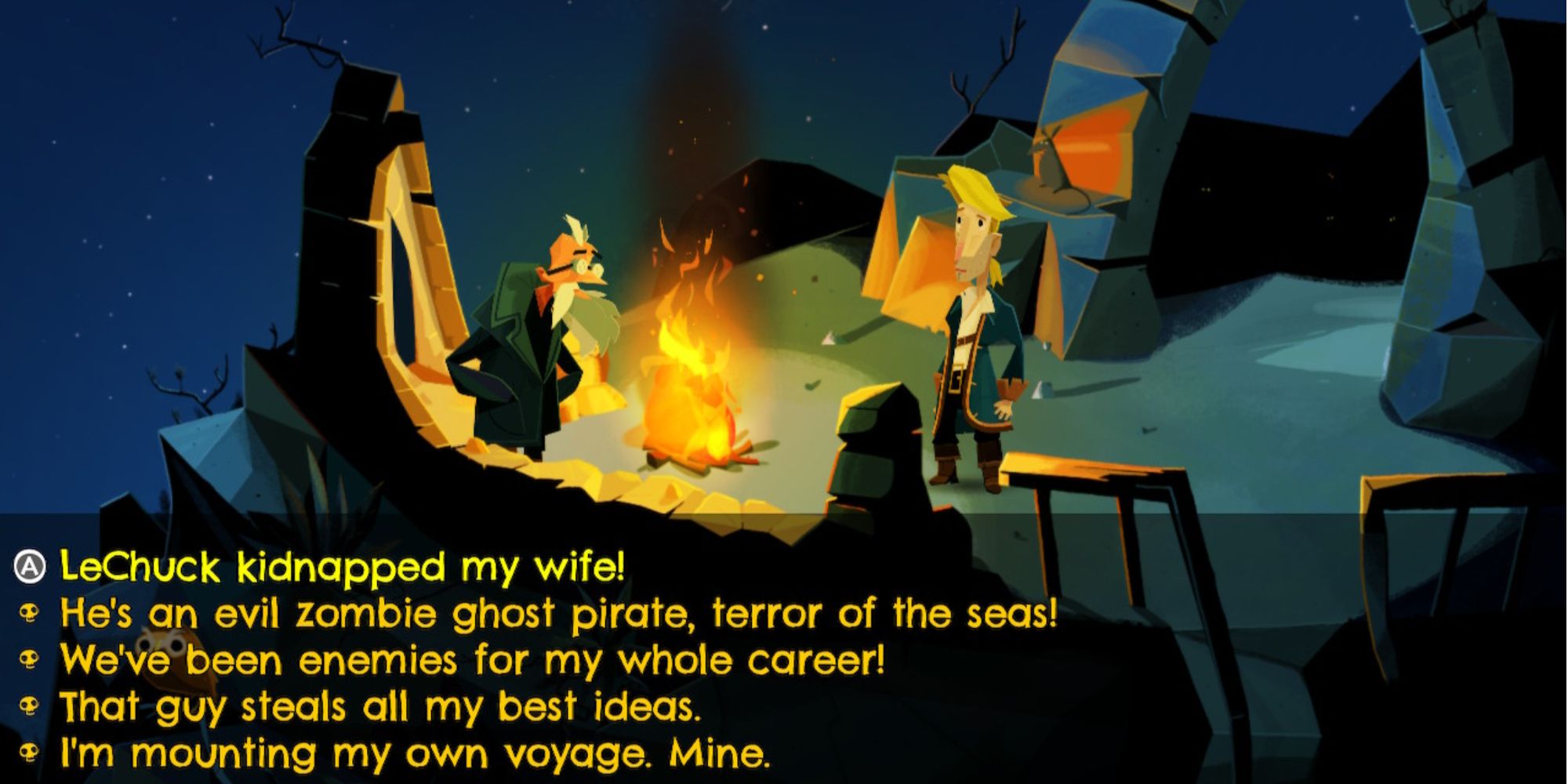 Depending on when you were born, you may have missed the great adventure game boom of the 80s and 90s. So, this might be your first ever Monkey Island game. Of course, you've probably heard of the series, heard some of its legendary jokes, and seen it referenced in other games, but that doesn't really mean you get it.

Thankfully, this isn't Dark Souls, so you won't be reading obscure item descriptions to consume another scrap of lore. Monkey Island does not take itself too seriously, so even if you are hungry for more content, it's okay to just let the game wash over you…But who are we kidding? We're picking every dialogue option possible, because we have to know everything.

5/8 Skipping Through SOME Dialogue 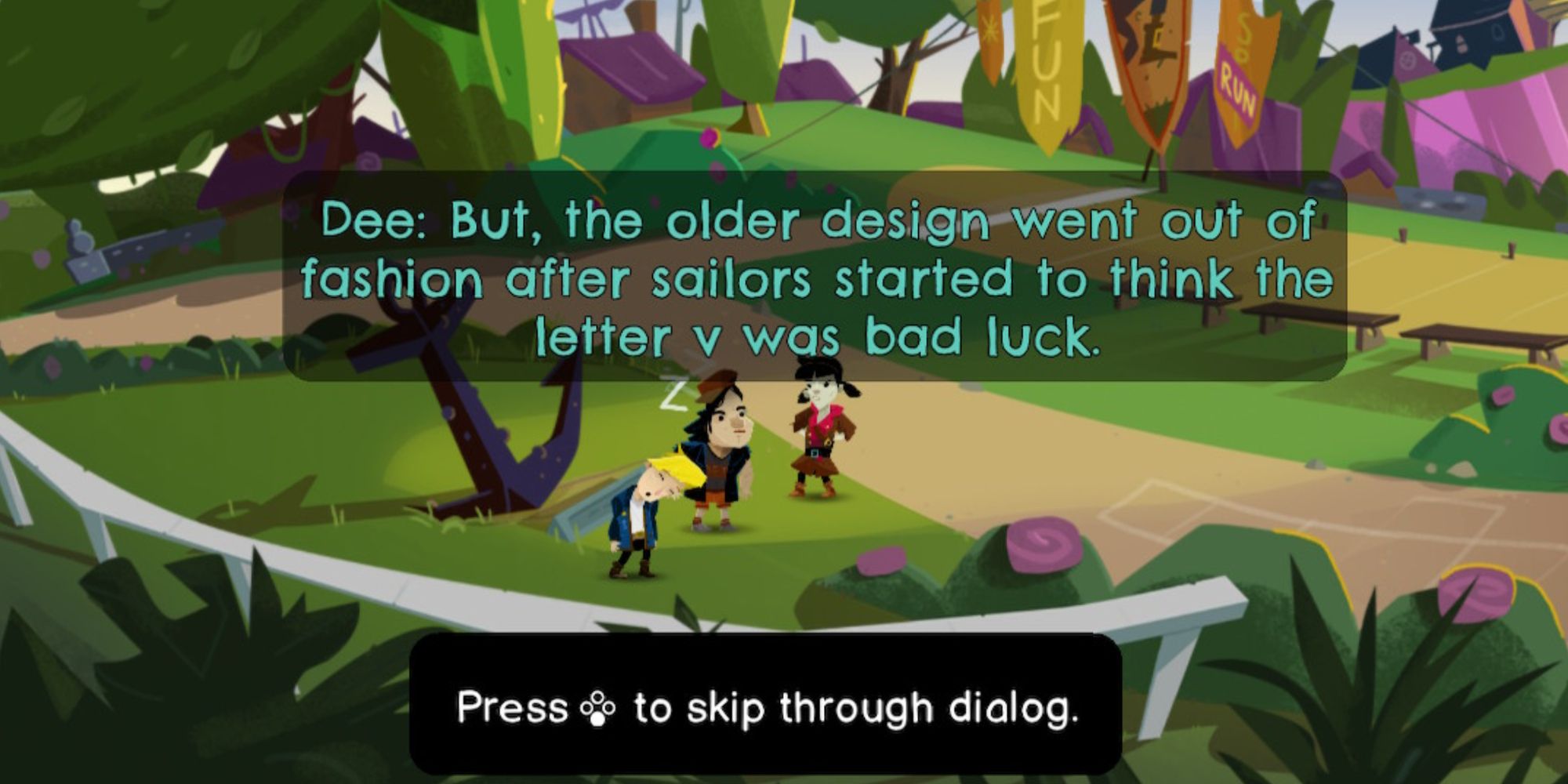 We've all done it. Maybe it's because we can read faster than the game can narrate. Perhaps because we already got the gist of what was being said. Or maybe because we're all a little impatient. Either way, if there's a section with a lot of dialogue, chances are we'll skip some of it. You know, just enough that we miss one thing and maybe get confused, and then have no one to blame but ourselves.

Return to Monkey Island has a lot of dialogue, as it should. And some of it is…long-winded, to say the least. You probably didn't mean to talk to Dee again after that long lecture on the origins of the anchor, yet here you are. Listening to her talk. Watching poor Boybrush fall asleep. Just skip ahead. We won't judge, and neither will the game. 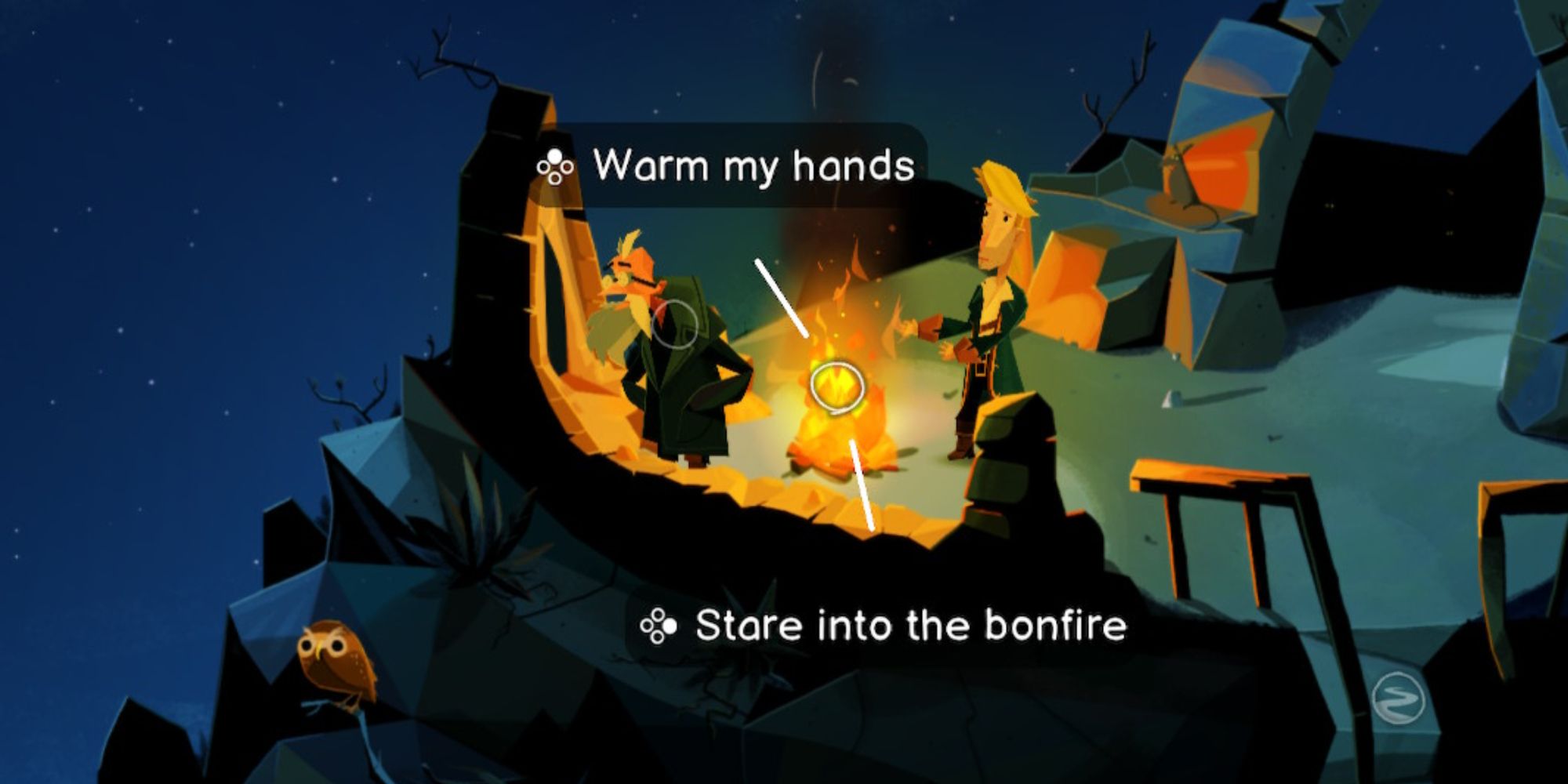 Whatever the weather, who among us can say no to warming our hands by a bright, crackling fire? It's instinctive, an impulse we can't control, and one that comforts us even in the darkest of nights. Return to Monkey Island is too chill a game to make you need downtime, but it is nice to give Guybrush a little break (at the very beginning of the game, mind) and let him warm himself by the fire.

There's something sweet about it, something that elicits feelings of warmth in us. Besides, we just put Boybrush through the wringer with that scurvydog — maybe we can balance out the cosmos by being a tiny bit nicer to Guybrush. We can rest easy knowing we let him have a moment of peace before he had to go out there and deal with the dreadful LeChuck. Besides, Guybrush will make fun of you if you choose to stare into the fire.

If you're playing Return to Monkey Island on the Nintendo Switch, and especially if you're playing handheld, there will be button prompts. The only issue is they don't tell you if they mean for you to push the buttons on the right Joy-Con or the left Joy-Con.

So you may find yourself frantically mashing the up triangle button on the left Joy-Con and wondering why nothing is happening. Then, as you grow more frustrated, you stare at the screen a little harder. Only to realize they meant for you to push X. Oops.

2/8 Forgetting You Can See Past Dialogue 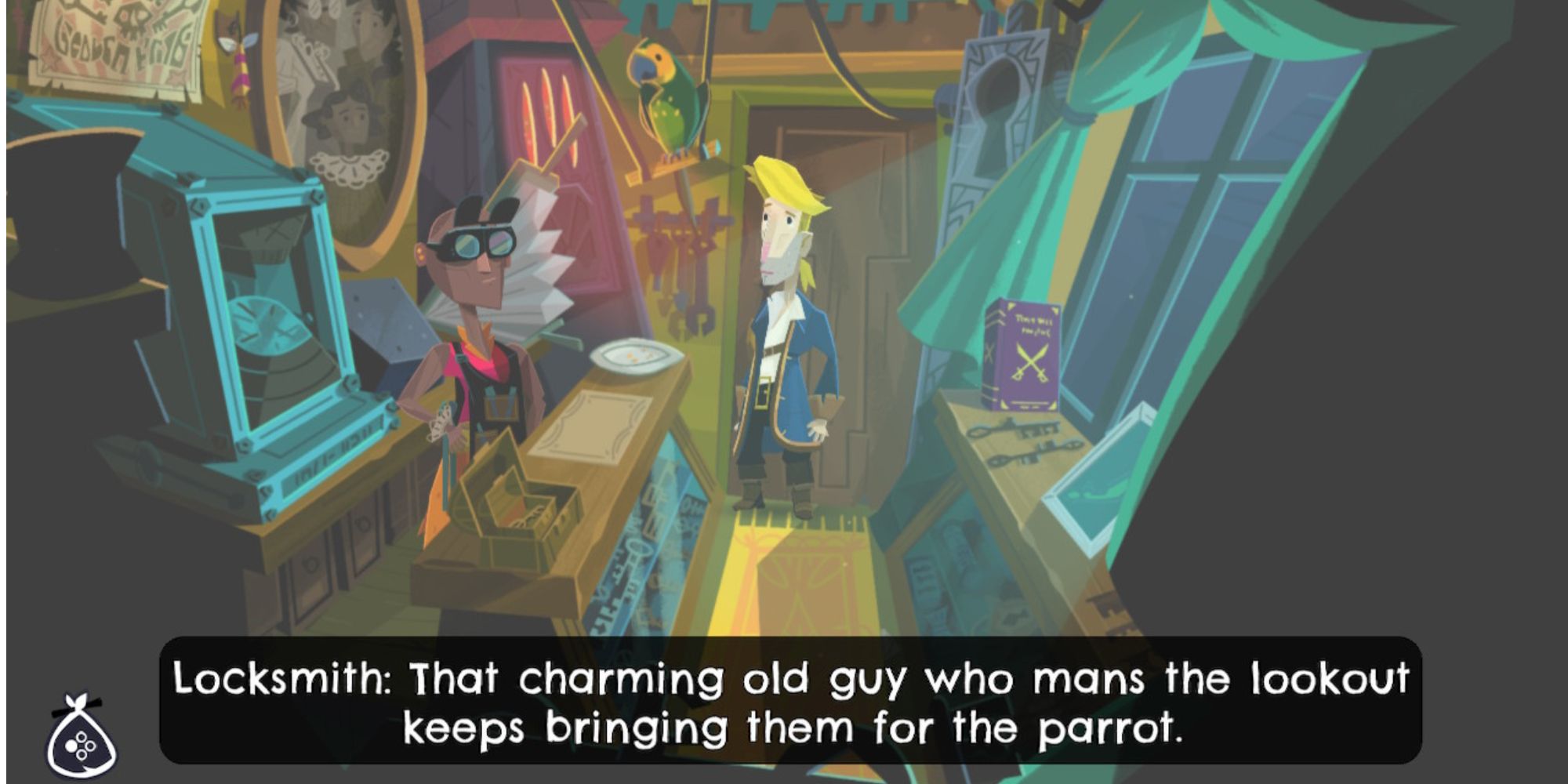 Related to pushing the wrong button is forgetting that, on the Switch version of Return to Monkey Island, the left Joy-Con allows you to cleanly navigate dialogue. It's such a handy feature, especially if you have the Writer's Cut option on and you're prone to skipping text, yet…it's really easy to forget it's there.

Even though it is always in the bottom left corner of the screen, helpfully reminding you that it exists, you may end up writing off sections of dialogue. You just went through them too fast and can't be bothered to, you know, go back and see what's what. The developers did everything they could to ensure you knew it was there. But you'll still forget. C'est la vie. 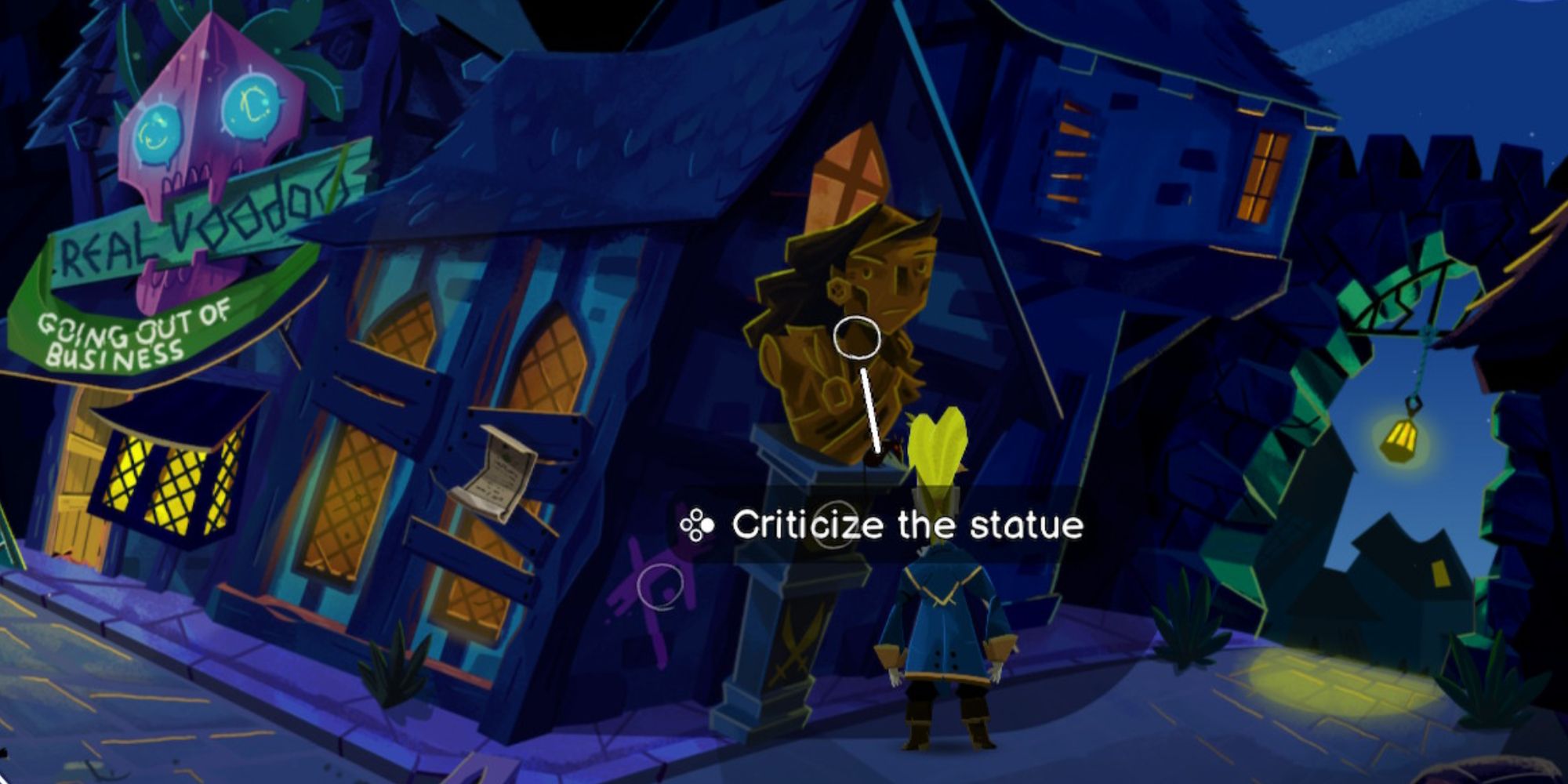 Guybrush is right. This isn't a statue of Elaine, so we don't want any part of it. From your vantage point, you can barely see the thing, anyway — this is an adventure game, and there are no fancy camera movements or photo modes. What you see is what you get, more or less, but we can take Guybrush on his word when he says the statue is bad, actually.

Who would know more about the art of sculpting and chiseling stone than Guybrush Threepwood, the famous pirate, anyway? No one, that's who!