As in many challenging roguelike adventures, you progress through the 2013 hit Rogue Legacy by dying. Each time you explore the castle's ever-changing dungeons, you will inevitably die, leaving all the treasure you gathered to an heir of your choosing. That heir will then be able to unlock permanent upgrades with their predecessor's gold. Some upgrades improve the heir's health or let them access new equipment, but arguably the most important upgrades unlock new classes.

Classes drastically change how an heir interacts with the castle. Whether you get the ability to drain life from your enemies or turn into a cloud of mist to phase through them, each class has its uses, though some give more of an advantage than others. 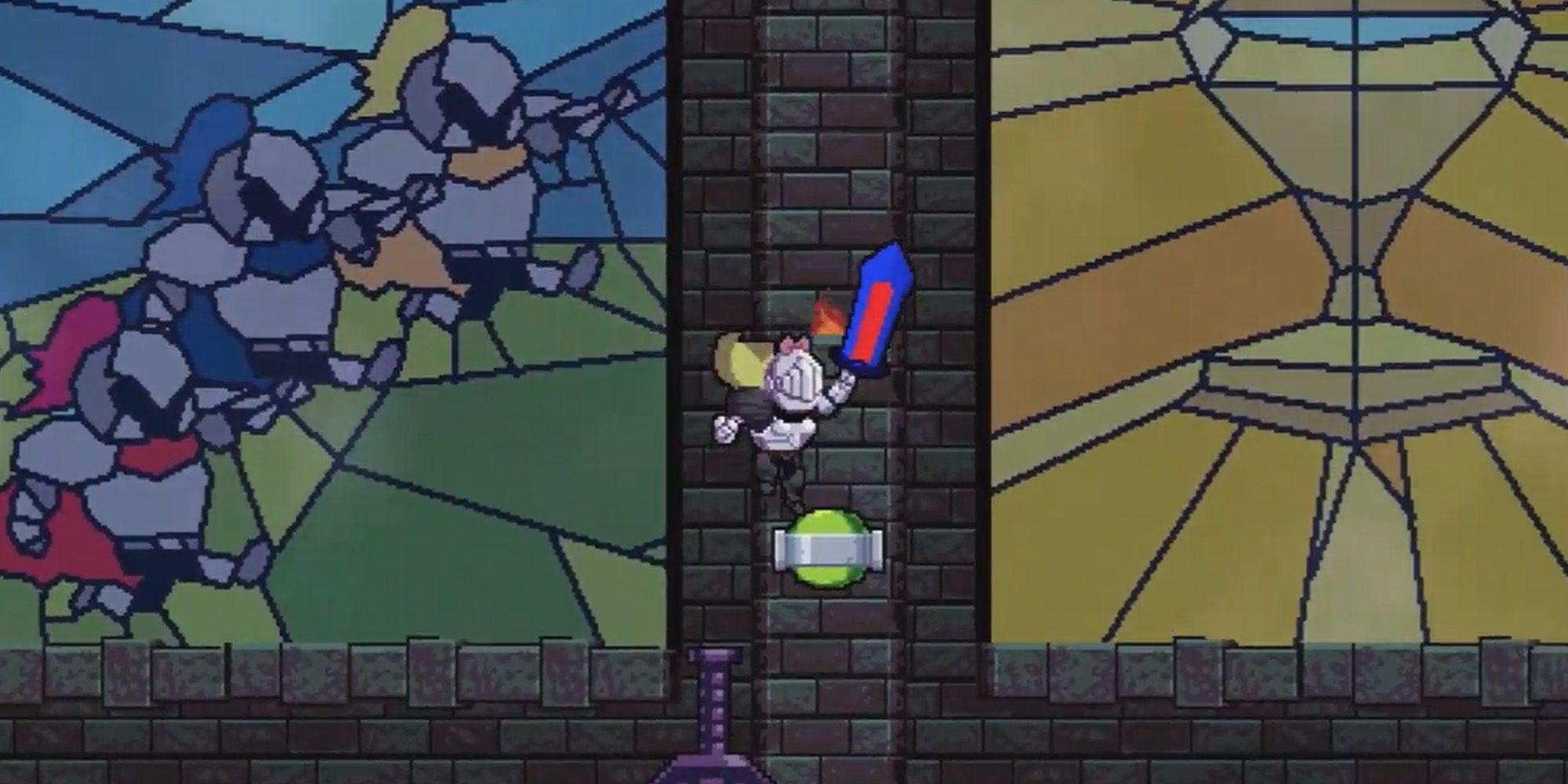 As one of Rogue Legacy's two secret classes, the Traitor is probably the most fun but least viable class. The Traitor always has access to three unique spells: a flurry of flying daggers, a rain of axes, and a more powerful version of the sword wall spell. These spells melt enemies and bosses in a way that feels like you're turning the castle's chaos against itself. The barrage of spells can be fun, but they drain a lot of mana.

However, because the Traitor has below average sword damage and health, you won't have much more firepower without your spells. Not to mention, by the time you can use the Traitor, you'll have already beaten the most difficult parts of the game.

9 Dragon: More Limited Power Than You May Think 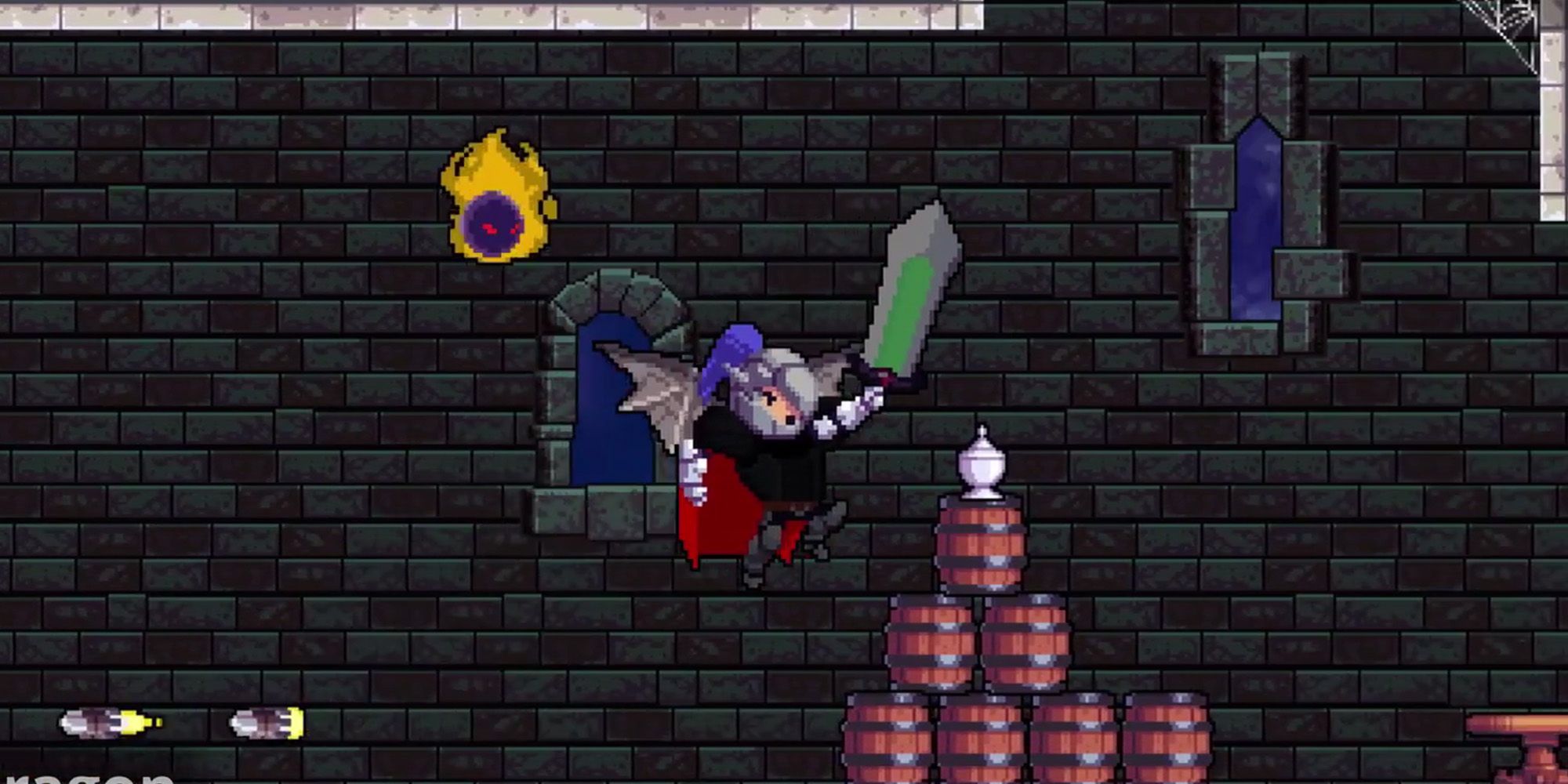 Playing as a dragon always sounds awesome, but in Rogue Legacy, it's often more effort than it's worth. The Dragon flips regular combat and movement mechanics on their heads: instead of attacking with a sword, you attack with a fire breath spell, and instead of jumping, you fly indefinitely.

The Dragon's low health makes you more vulnerable than most classes. The flight controls are sensitive and difficult to get used to, and fire breath can't hit enemies above or below you. It will take a lot of experience to play the Dragon effectively. 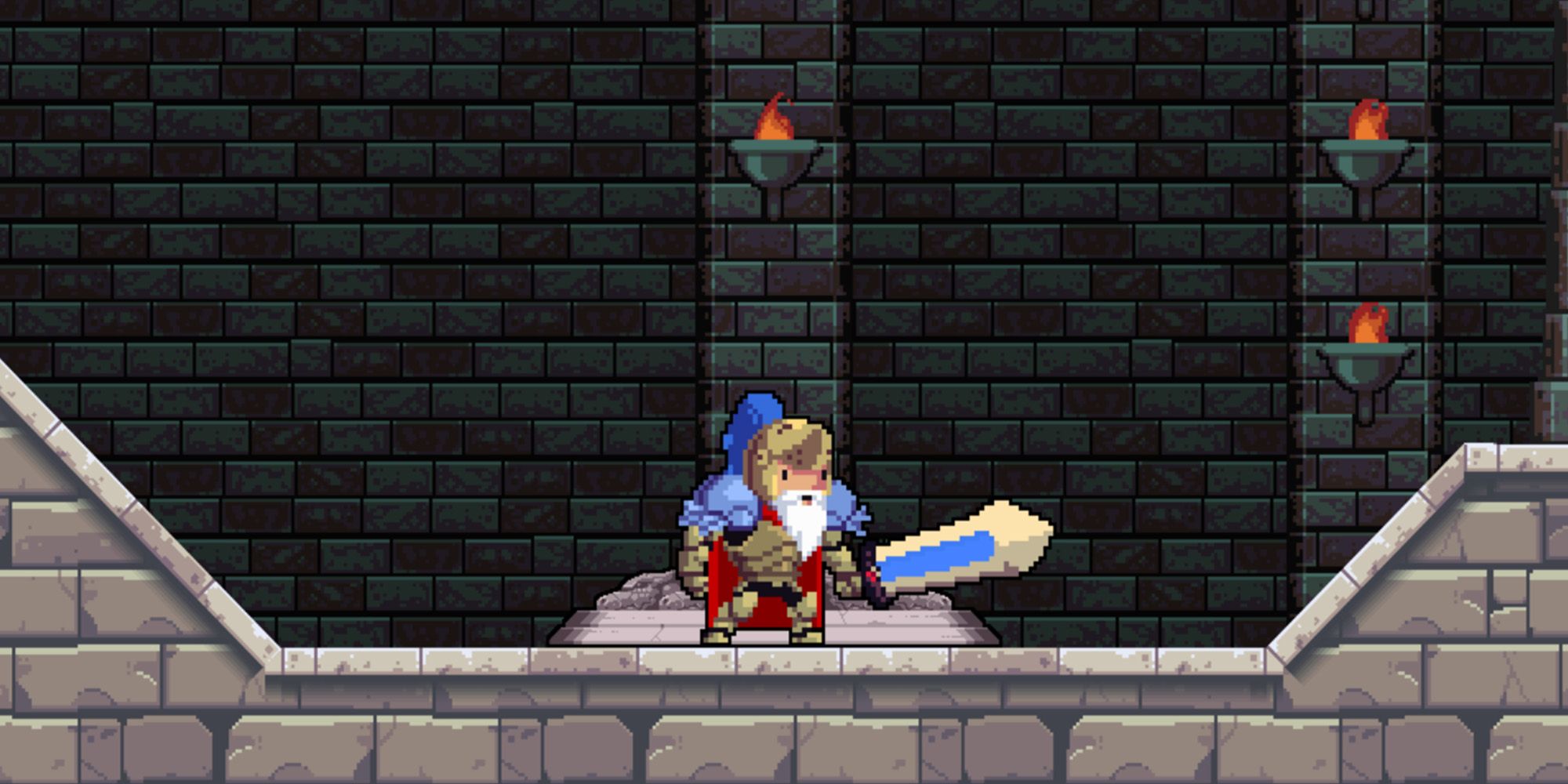 The Mage is your classic spell slinger. With high mana, high spell damage, and the ability to regain mana by killing enemies, most of the time you'll be able to deal some serious arcane damage. The Arch Mage upgrade is necessary since it gives you the ability to cycle through three spells, making the Mage more versatile.

The Mage's deadliness comes at a cost. You'll be forced to kill enemies with your sword if you ever run out of mana, and since you have low health and sword damage, you'll be much more likely to die in late-game areas. 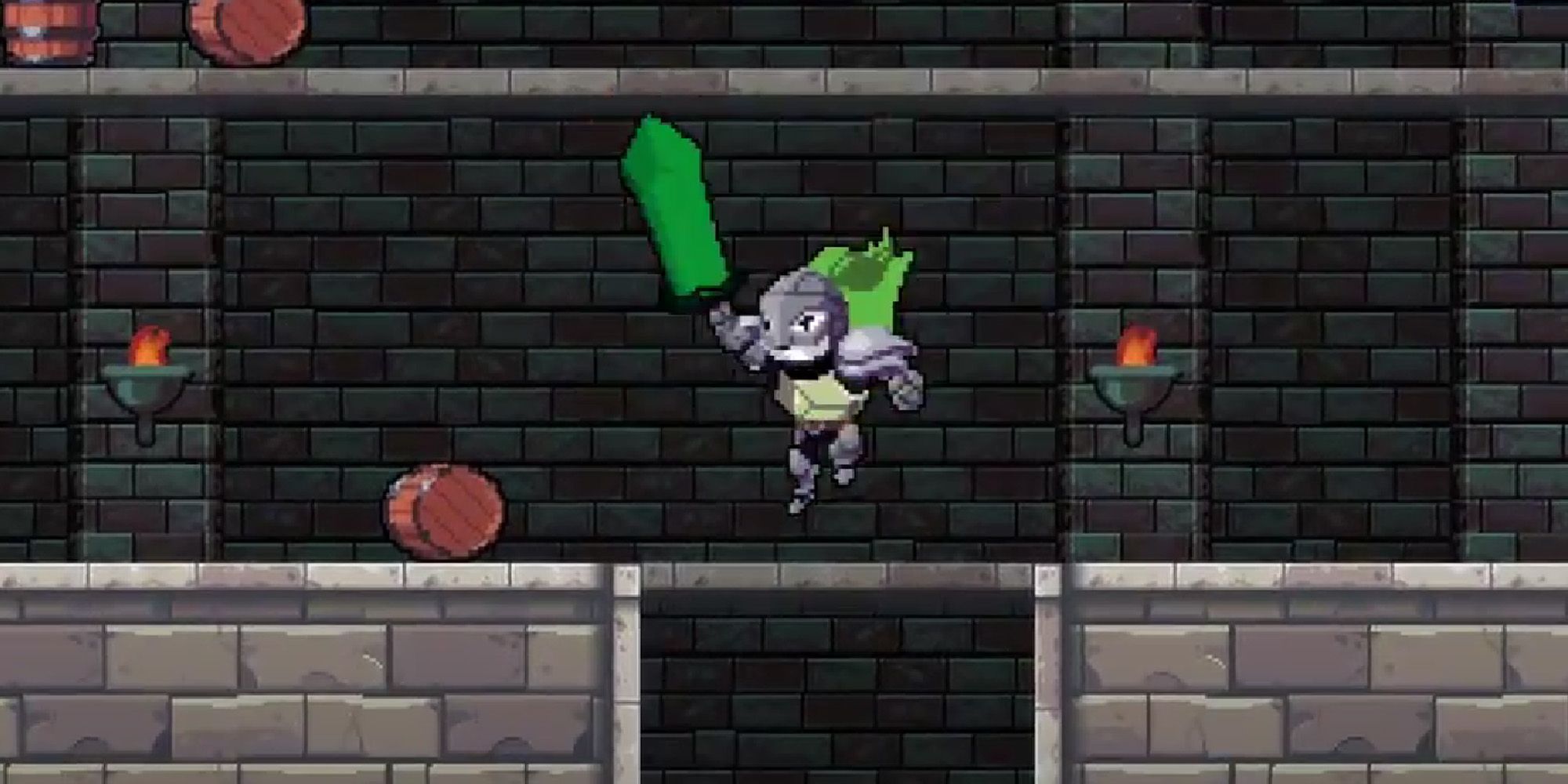 Every time you kill an enemy as the Lich, also known as a sorcerer of the undead (and constantly formidable presence in Dungeons & Dragons), you will heal yourself and permanently increase your initially low max health. If you're careful enough at the beginning of the castle, this life steal ability can turn your health from your biggest flaw into your biggest asset. The Lich King or Queen upgrade also makes it possible for you to transform half your max health into max mana, letting you slowly increase both stats.

Be warned, though: The Lich's below-average sword damage makes it difficult to survive in the first place. During boss fights, you have very few offensive or defensive abilities. 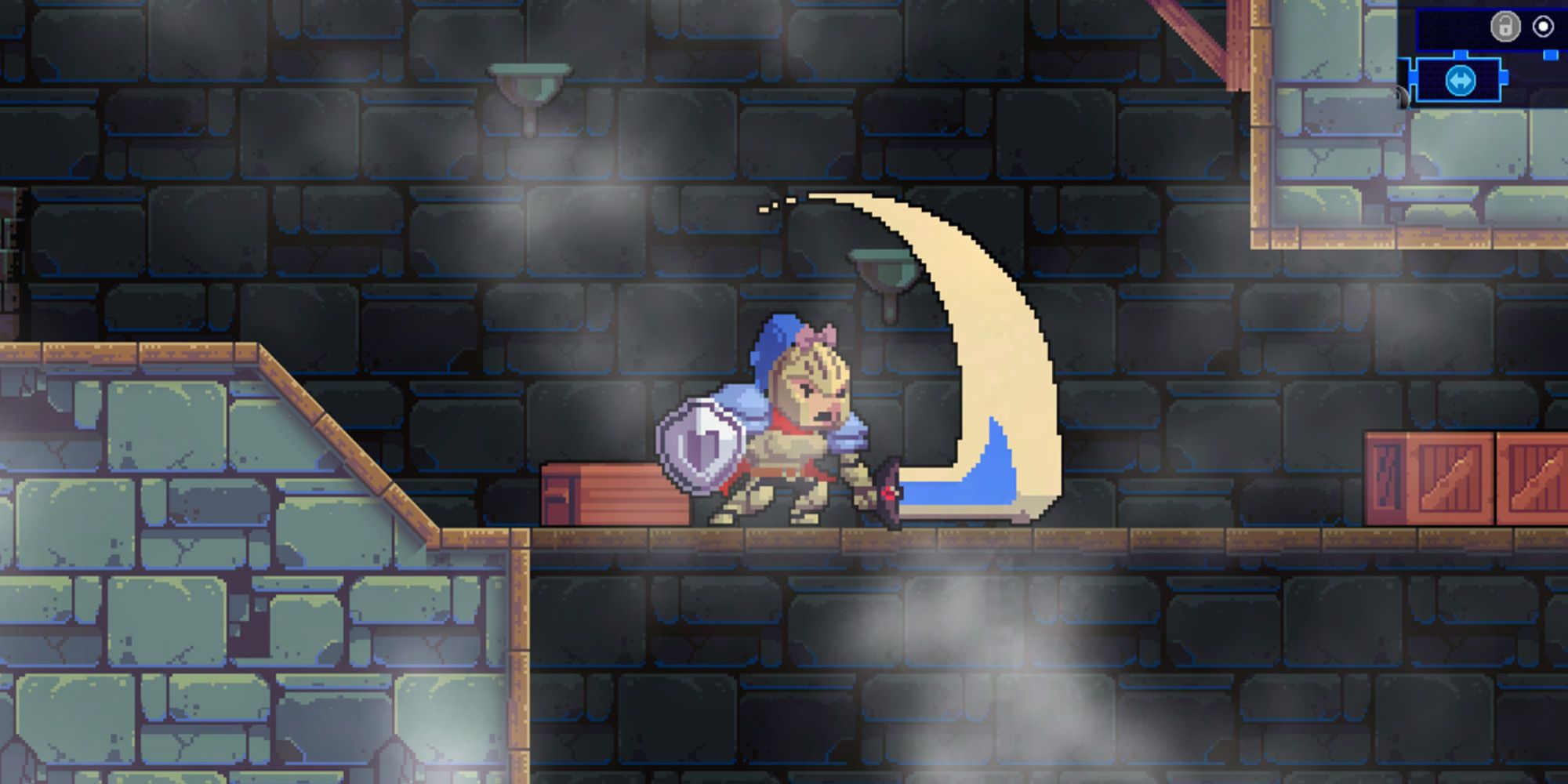 The Knight is the first class you play as. They have average sword damage, health, and mana, and no special abilities (bearing some similarities to the Warrior class of Dicey Dungeons). Once you get the Paladin upgrade, the Knight can hold up a shield to cancel oncoming damage, which drains some mana. Although it doesn't look capable of it, the shield will cancel damage coming from any direction (not just from the front) so long as you hold the block button.

By holding downward before activating the shield, you can also turn the Knight into a statue that deals contact damage to enemies. The Knight is meant to be an introductory class, so they are powerful in the beginning, but they don't have much depth or late-game potential. 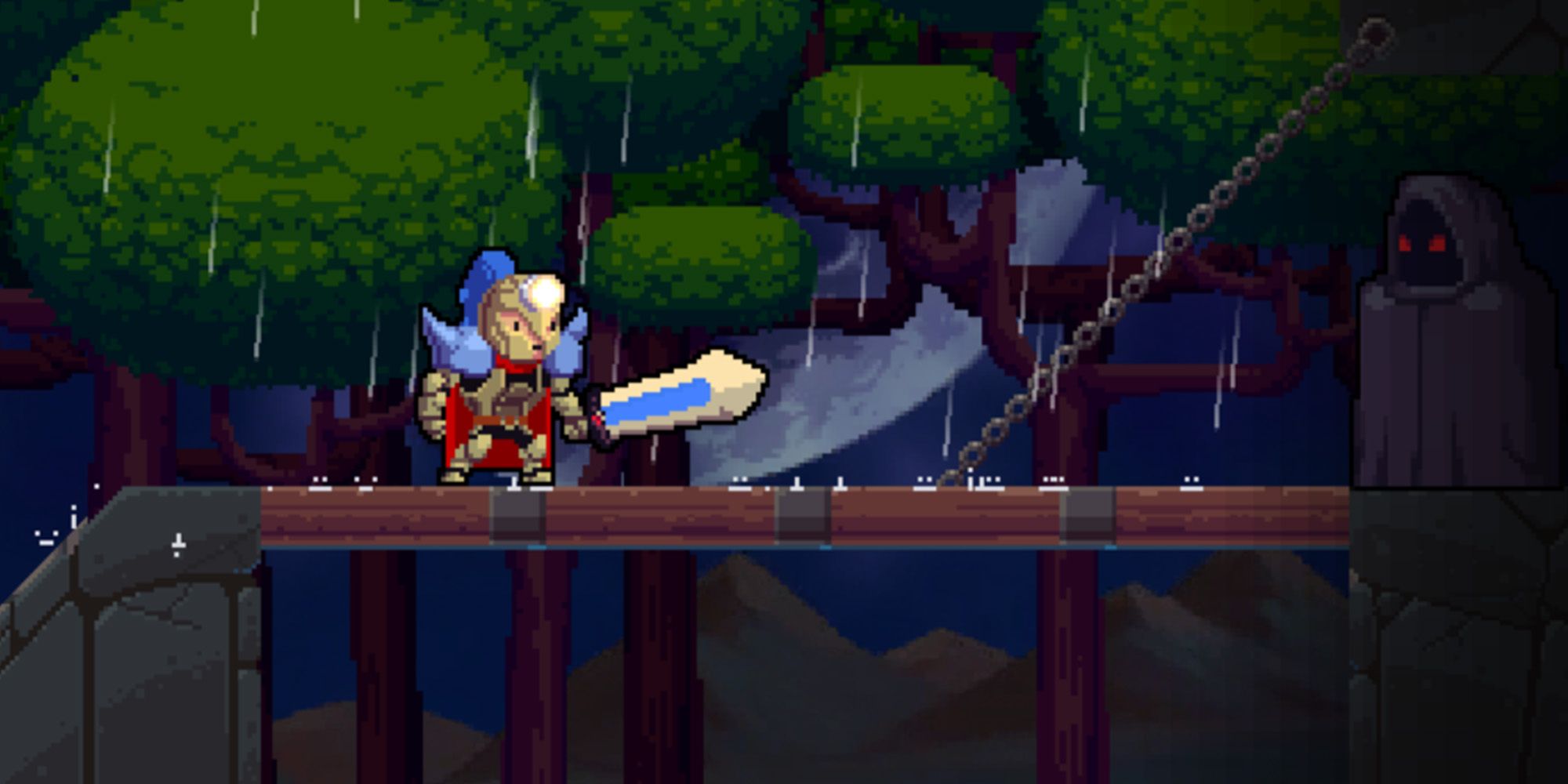 To justify their low health, mana, and sword damage, every instance of money the Miner collects is worth much more than normal. If you slip past enemies and through rooms, interacting only with chests, you will pass heaps of money on to the Miner's heirs. The class is drastically improved by the Spelunker or Spelunkette upgrade, which shows you where treasure chests are on the map.

The Miner also comes with a mining hat that lights up dark rooms, a small but useful addition that horror game fans accustomed to relying on flashlights are bound to appreciate. Being weak overall, they won't be able to slip by unharmed in tougher areas, but they'll be great to use for obtaining early upgrades.

4 Shinobi: A Powerhouse That Suffers Defensively 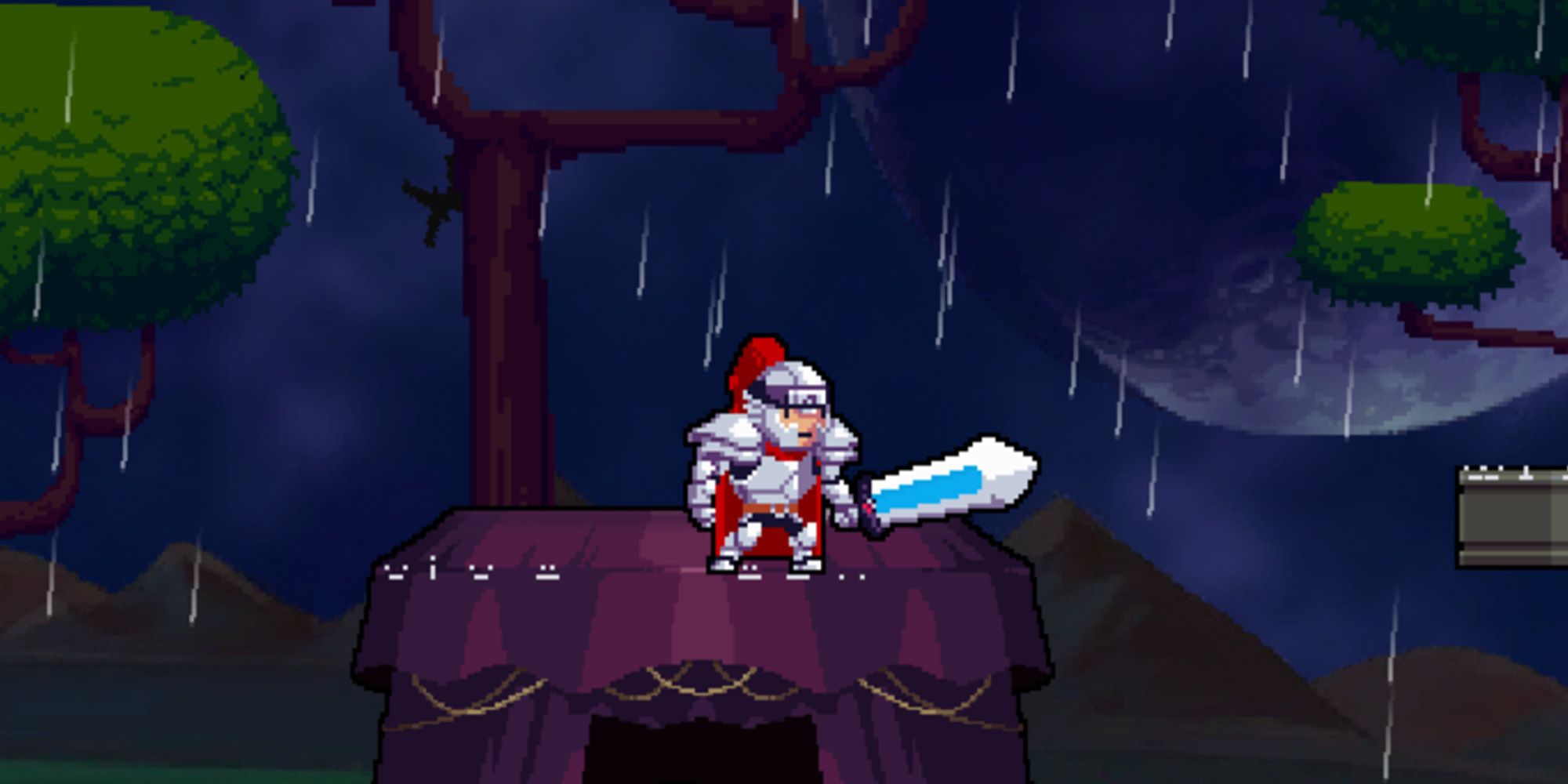 The Shinobi trades the ability to deal critical damage for higher sword damage and speed. As there are no special gimmicks or random elements to worry about, using the Shinobi class makes you powerful and reliable, even in late-game sections.

This class needs to be treated with caution: One misstep and you could lose a large chunk of your low health. The Hokage upgrade unlocks the Flash ability, whose teleportation gives you a chance to avoid damage and continue to wield the Shinobi's high damage for longer.

3 Barbarian: Tanky But Lacking In The Damage-Dealing Department 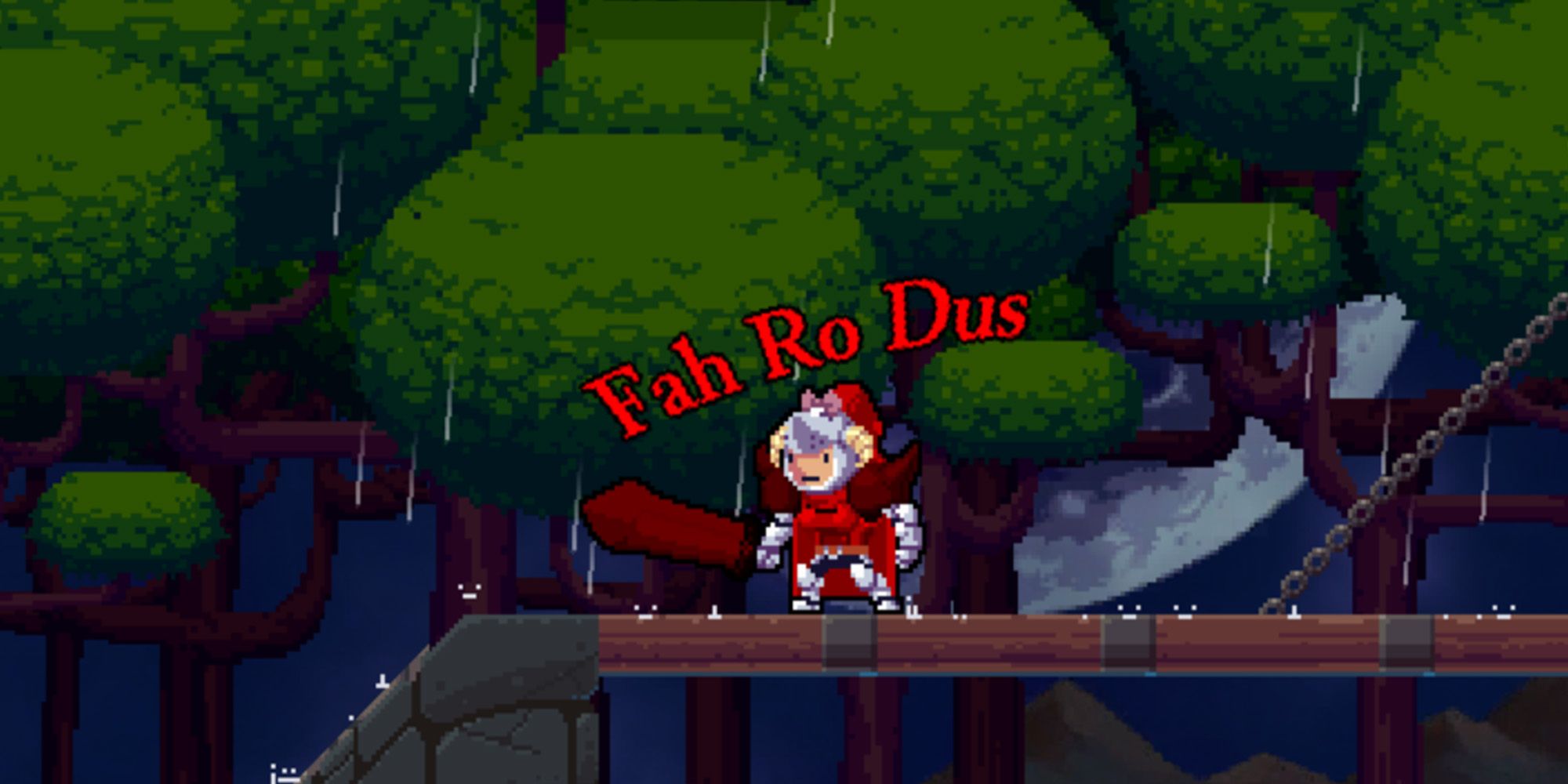 Despite their lower mana and strength, the main point in the Barbarian's favor is their high health, but the root of their defensive power is the Barbarian King or Queen upgrade. You are granted the power of Fah Ro Dus, a Skyrim-inspired shout that breaks all destructible objects in the room and pushes enemies back.

Using the shout will let you safely reposition yourself, which can be especially helpful in the densely populated late-game areas, and against bosses. The Barbarian is fantastic at tanking damage, but suffers a little when it comes to returning it. 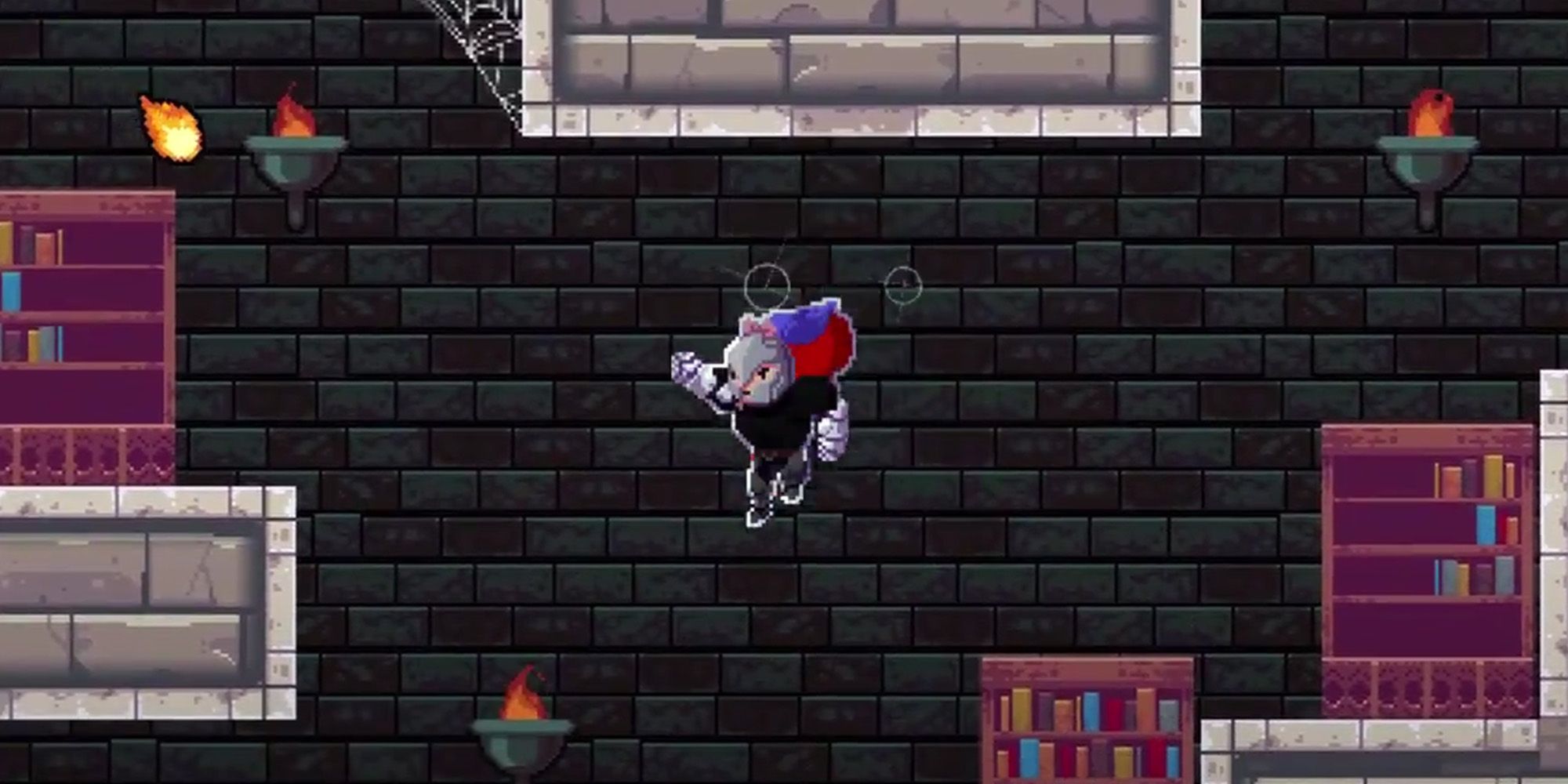 Where the Mage has to kill to regain mana, the Spellthief only has to hit enemies to do so. Although their mana is lower than the Mage's, their health is somewhat higher. These two differences make it much more likely for the Spellthief to survive if they ever run out of mana during combat.

As if more incentive is needed to play the class, the Spellsword upgrade allows you to use empowered versions of your spells, which deal double damage for double the mana cost (don't underestimate this downside). Even though you won't deal much sword damage with the Spellthief, you'll mostly be using spells, so it won't matter much. Blast away in roguelike shooter fashion! 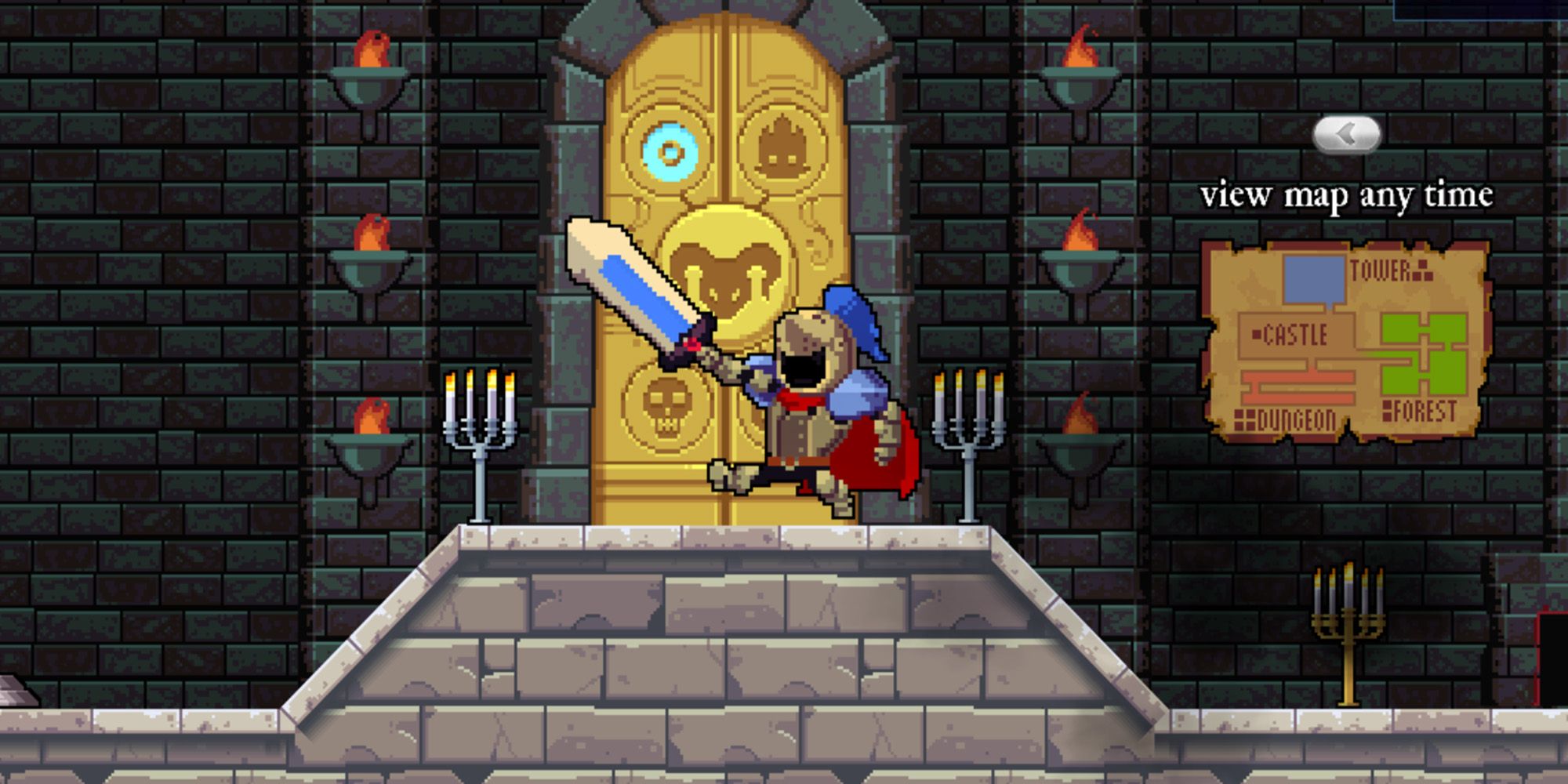 As the Knave, your health, mana, and sword damage are lower than average, but you have increased critical damage and critical chance. With enough upgrades to your critical chance, and with enough careful maneuvering through the castle, you will melt bosses with ease.

The Assassin upgrade, however, makes that careful play much easier: Using Mist Form grants you invulnerability from all types of damage until you attack with your sword. The ability drains mana quickly, but if you time it right you can storm through the castle and take down bosses that much quicker. For these reasons, the class may be the most efficient and all-around powerful in the game.