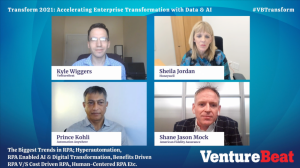 The market for robotic process automation (RPA), the technology that builds and manages software robots that emulate humans’ actions, has grown substantially during the pandemic. As enterprises look to scale up operations while lightening the load on remote workers, brands across banking, retail, manufacturing, and more sectors have applied RPA to tasks including sales, human resources, and logistics. According a Deloitte survey, 53% of respondents are beginning to deploy RPA. And Grand View Research anticipates that the RPA industry will be worth $3.1 billion in 2025, up from $358 million in 2017.

During a panel at VentureBeat’s Transform 2021 virtual conference, experts including Automation Anywhere CTO Prince Kohli, American Fidelity Insurance VP of R&D Shane Jason Mock, and Honeywell chief digital technology officer Sheila Jordan spoke about some of the biggest trends in RPA today. They touched on the challenges facing businesses adopting RPA, including security blockers that might crop up during deployment processes. And they discussed how RPA can drive benefits by leveraging innovations in AI and machine learning.

“When I first heard the term ‘RPA,’ I thought, that’s so stupid — we’re not going to have robots sitting in cubicles doing our jobs. But then I saw a demo, and that’s when I realized that it’s going to change everything,” Mock said. “So often, when you’re working with disparate or legacy and even modern systems, if you don’t have the right API structure, it’s very difficult to work between these different systems. RPA allows you to toggle and emulate that human interaction, and it’s something that becomes very powerful and can be very creative as you think through, ‘How can I solve this business repetitive task?’”

At a high level, RPA allows users to define a set of instructions for a robot to perform, like copying and pasting files from one location to another. Most RPA platforms leverage AI to map tasks to automation opportunities and identify the most frequent patterns from the data, recording metrics from apps including steps and execution time. Document understanding capabilities let these platforms ingest, analyze, and edit PDFs and images, while computer vision algorithms enable RPA software to recognize and interact with on-screen fields and components like Flash, Silverlight, and virtual desktop clients.

“RPA lets you create an abstraction at a higher level of an application, but think about the process,” Kohli said. “What we find is that, for most customers, they know what they want — to automate what the company does day in and day out … Once people taste it, smell it, they start expanding very quickly.”

For example, Honeywell is applying RPA to tasks including payroll and order fulfillment, Jordan said. One set of software robots prioritizes orders at the company, so that those ready to ship leave warehouses as soon as new inventory comes in.

“When we started doubling down on automation about two years ago, we looked for repeatable processes that are massively manual with a quite broad [amount of] data. With RPA, even if we have disparate systems in different geographies, we can easily automate and bring together flows from these systems,” Jordan said. “We now have 70 projects a year … in specific areas of commercial excellence, [including our] marketing and sales organization.”

The future of RPA

According to Mock, RPA will accelerate the digital transformation of business divisions post-pandemic, allowing employees to focus on work that adds value. The technology will reach near-universal adoption at some point in 2023, Deloitte predicts — perhaps because top performers earn nearly 4 times on their RPA investments while other enterprises earn nearly double.

“It’s really, really easy to train machine learning [in RPA] with the tools that are out there today … It lets employees drop the drudgery — the parts of their job that they hate,” Mock said. “Think about a process like routing emails to the correct department. Using RPA, you can route thousands of emails a minute to the correct departments and business units.”

That’s not to suggest that RPA is always smooth sailing. When dealing with hundreds to thousands of robots, each could become an attack vessel. Moreover, Deloitte reports that 17% of organizations face employee resistance when piloting RPA and that 63% of those organizations struggle to meet time-to-implement expectations.

Mock said that it’s important that stakeholders figure out how robots and humans can best work together across the workforce, which he believes will be the biggest challenge over the next five years. Jordan suggested that having standardized processes helps, and urged businesses in the process of deploying RPA to consider the security incompatibilities that might exist across different systems.

“Using technology to automate a bad process is a double whammy of negative,” Jordan said. “When there’s a standard process that you can use across any function or any strategic business unit, that goes much faster and quicker [when it comes to automation of that process]. [Having the] standard design model really, really works.”