After three years, Sea of Thieves has introduced a new seasonal format that sees players attempt to complete a series of increasingly difficult trials to earn in-game rewards. There is plenty to unlock for everyone, with even more for Pirate Legends, but those that purchase the Season Pass will unlock more on top of that.

There are four Experienced Trials of the Sea, that ask you to things that might not so easily fit into other categories. These are often highlighting the calmer side of things on Sea of Thieves which can be a welcome relief from the vast adventures and daring action also found in the game. Each Trial is broken down into three deeds that need to be completed, and this guide will walk you through each one. 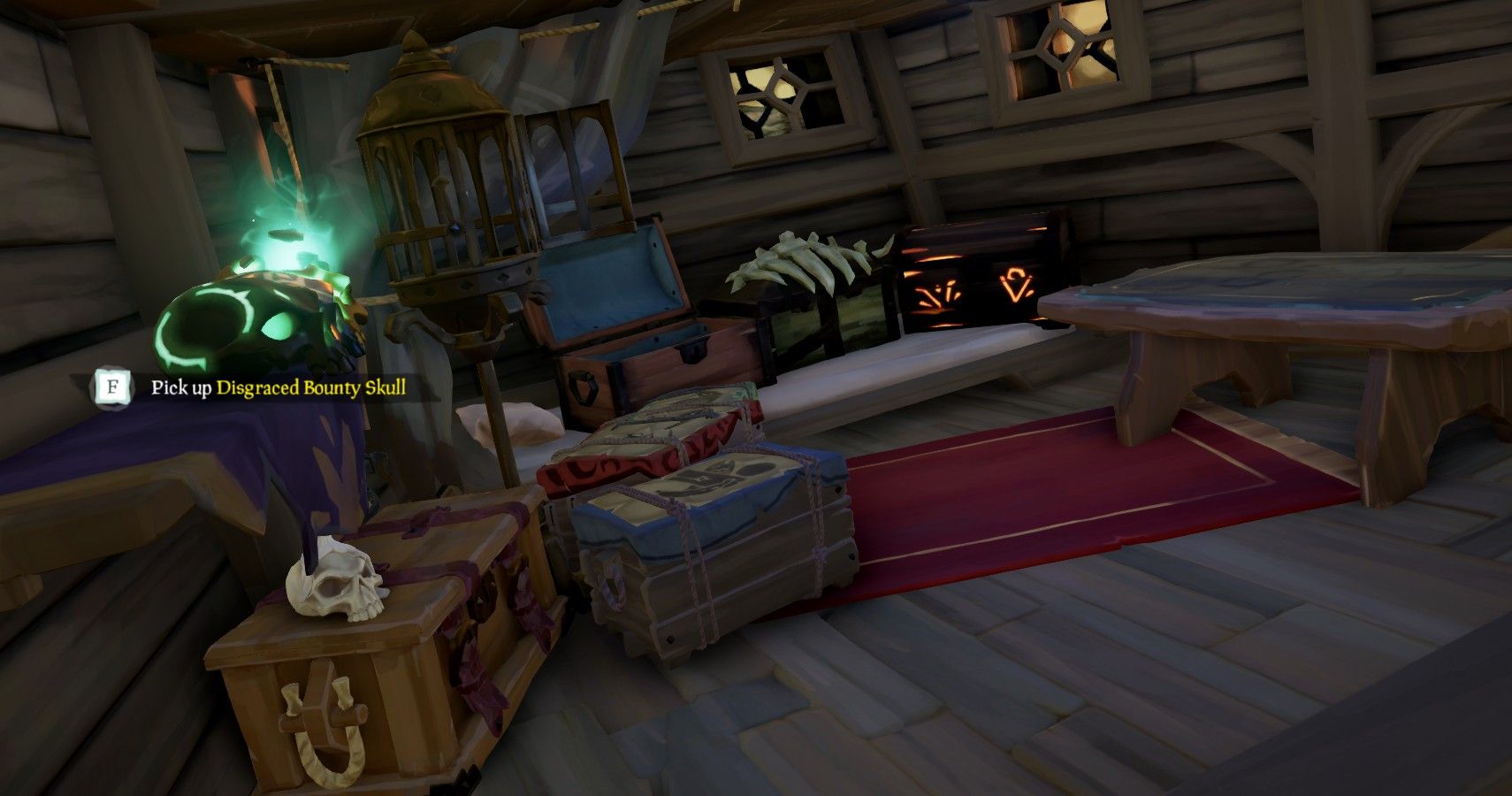 The Experienced Crewmate knows how to fight as part of a team. The first deed wants you to block another pirate’s attack, then strike them. This means you’ll have to find another player on Sea of Thieves and get them to attack you. Every other pirate you meet that isn’t on your crew can attack you, even those in an alliance, so you should be able to find someone unfriendly, or incredibly friendly, to help you complete the deed.

Once they’re slashing away with their cutlass, use your own sword to block one of the slashes and immediately attack when they are stunned. This trick also works on skeletons and you so be careful. But once you’ve done it, the deed will complete.

The second deed wants you to revive a fallen crewmate. Every time you die in Sea of Thieves, or spirit will slowly leave your body to board the Ferry of the Damned, but another pirate can wrangle it back and restore you to life before you have to do your time.

For this deed you’d have to find a dying crewmate. This means you can’t just find another pirate, kill and revive them. The easiest and safest way to do this is to have your friend leap from the crow’s nest until dead, then simply attend their body before their spirit floats away to high and you will be given the button prompt to revive them. Hold it down until they’re standing and the deed will be done. 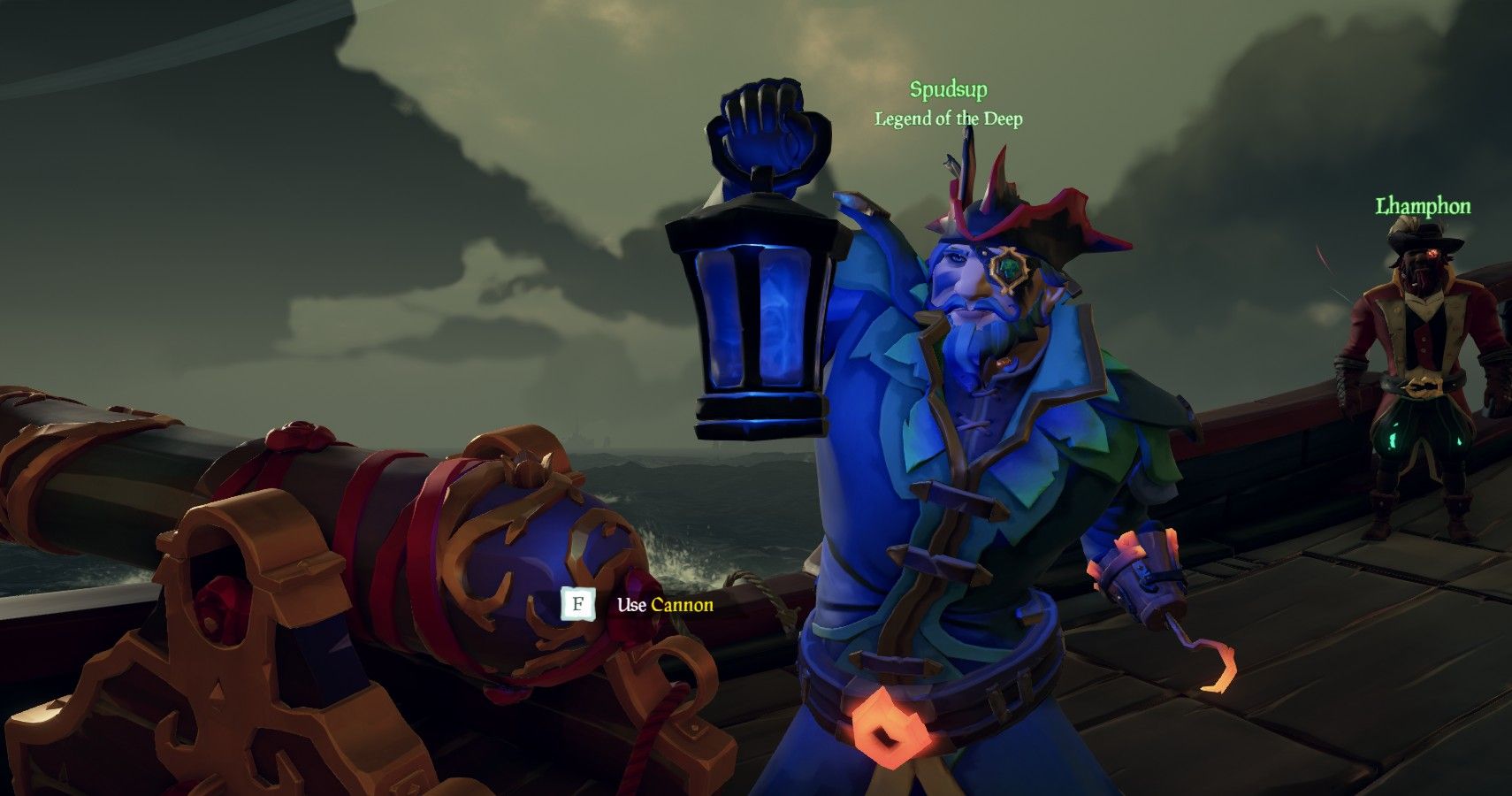 The Experienced Diplomat wants you to take your alliances to the next level, although you often don’t need your allied ship anywhere near you. The first deed wants you to complete the Skeleton Ship while in an Alliance. You can form an alliance in the crow’s nest using the flag box if there’s a potential alliance close or by raising the alliance flag if there are no other ships around you. Once you’ve found your alliance you’ll have to find a skeleton ship. You can normally spot them patrolling the seas impassively and tell them apart from pirate ships thanks to the tattered sails and lantern placement. If none are presenting themselves there’s always a chance that one will spawn and attack you as your sailing, or you could look out for the cloud of ship and sail towards it until you reach a naval battle.

All you need to do is defeat the ship until it slips below the waves with the alliance collapsing, and the deed will be completed.

The second deed wants you to defeat Flameheart’s Ghost Ships while in an Alliance. If you’ve already completed the Alliance Adept Trial in the Deadly Trials of Combat section, this deed should be complete already, so double-check. Once again you’ll have to find an alliance for this deed to count so you should go out and make some piratical friends first.

Once you’ve done that you’ll need to find the Flameheart’s World Event which you can see is active by the giant orange face of Flameheart floating over the world. When you can see him, head in his direction until you see the Ghost Ships in question. Defeat them and this deed will be complete. If you’d like more in-depth information on the Ghost Ships check out the Ghost Hunter Trial in the Infamous Trial of Combat Guide.

The final deed wants you to be in an alliance where all the ship’s lanterns are the same colour. For this you will need at least one Flame of Fate from the Ferry of the Damned and at least one allied ship. Once you’ve gathered both of those, all you need to do is change every lantern on every allied ship (if you’re alliance has more than two crews in it) to the same Flame of Fate. Once the last lantern is the same colour as the rest and on, the deed should complete. 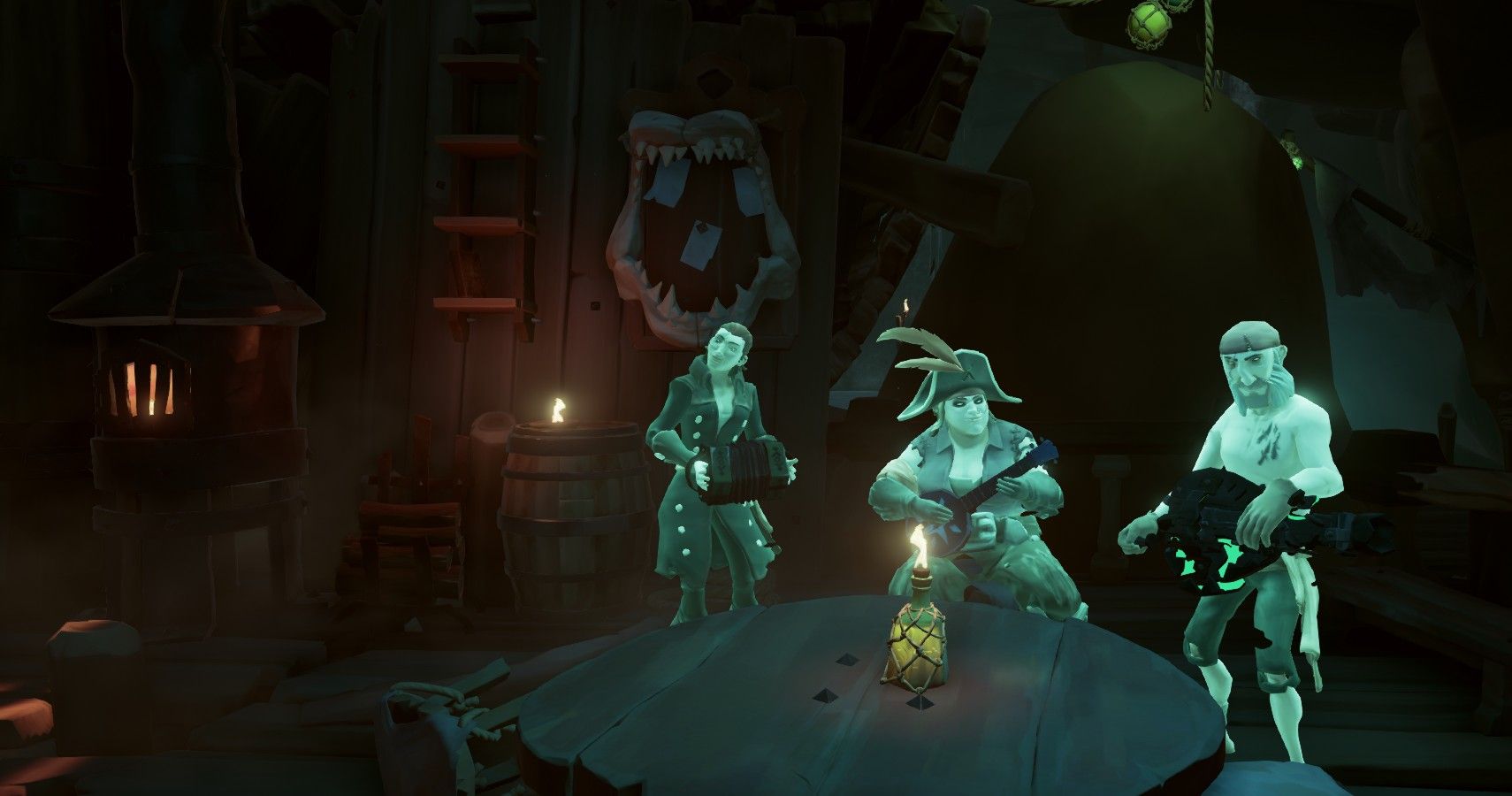 The first deed of the Experienced Reveller is exactly the same as the Apprentice Socialite, wanting you to drink with another crew at an outpost. Blame the grog if you forgot. Simply drink from your mug while at least one pirate from another crew drinks from there while you’re standing on an outpost.

You can fill up your mug at the tavern or with the grog barrel on your ship if needed, but the mug will automatically be filled at the start of your session so you’ll only have to worry about that if you’ve been drinking before arriving at the Outpost. Once you’ve managed to wrangle another crew into drinking with you on the Outpost, the deed will be completed.

The second deed wants you to defeat ten skeletons affected by a grogball. Grogballs are a type of Green Cursed Cannonballs that can be found in the barrels scattered throughout the Sea of Thieves. The effect of the grogball, unsurprisingly, makes the affected drunk. And most importantly, you don’t need to kill ten skeletons affected by the same grogball, so you can spread this out.

To do this you’ll need to hit a Skeleton Ship with a grogball to affect its crew, and then destroy as many of them as possible. The easiest method to do this is fire a single grogball onto the Skeleton Ship and then follow it up with as many regular cannonballs as possible. If possible you’ll want to waim for the cannons where most of the skeletons will congregate. Once you’ve defeated the ten drunken skeletons, the deed will be complete.

The final Experienced Reveller deed wants you to throw a bucket of vomit on an enemy pirate holding a sword. This can be quite difficult to orchestrate but before you even attempt it you’ll need a bucket of vomit.

To acquire one of them, drink two or three full mugs grog in quick succession and then equip the bucket. If your holding the bucket when you throw up, you will catch the green slime in the bucket which you can store for later.

Once you’ve got that, you’ll have to find an enemy pirate. That means finding another player and not entering into an alliance with them. But it does not mean they have to be attacking you. If you can approach a friendly pirate and explain the situation, they might willing equip their sword and let you throw vomit over them.

Otherwise you’ll have to accurately throw your vomit over a hostile player while they try and kill you. This isn’t as easy, but if you’re on full health and not moving, you’ll get an opportunity or two to catch them as they kill you. But they probably will kill you.

Once they’re covered in the remains of your grog and bananas, the deed will be complete. 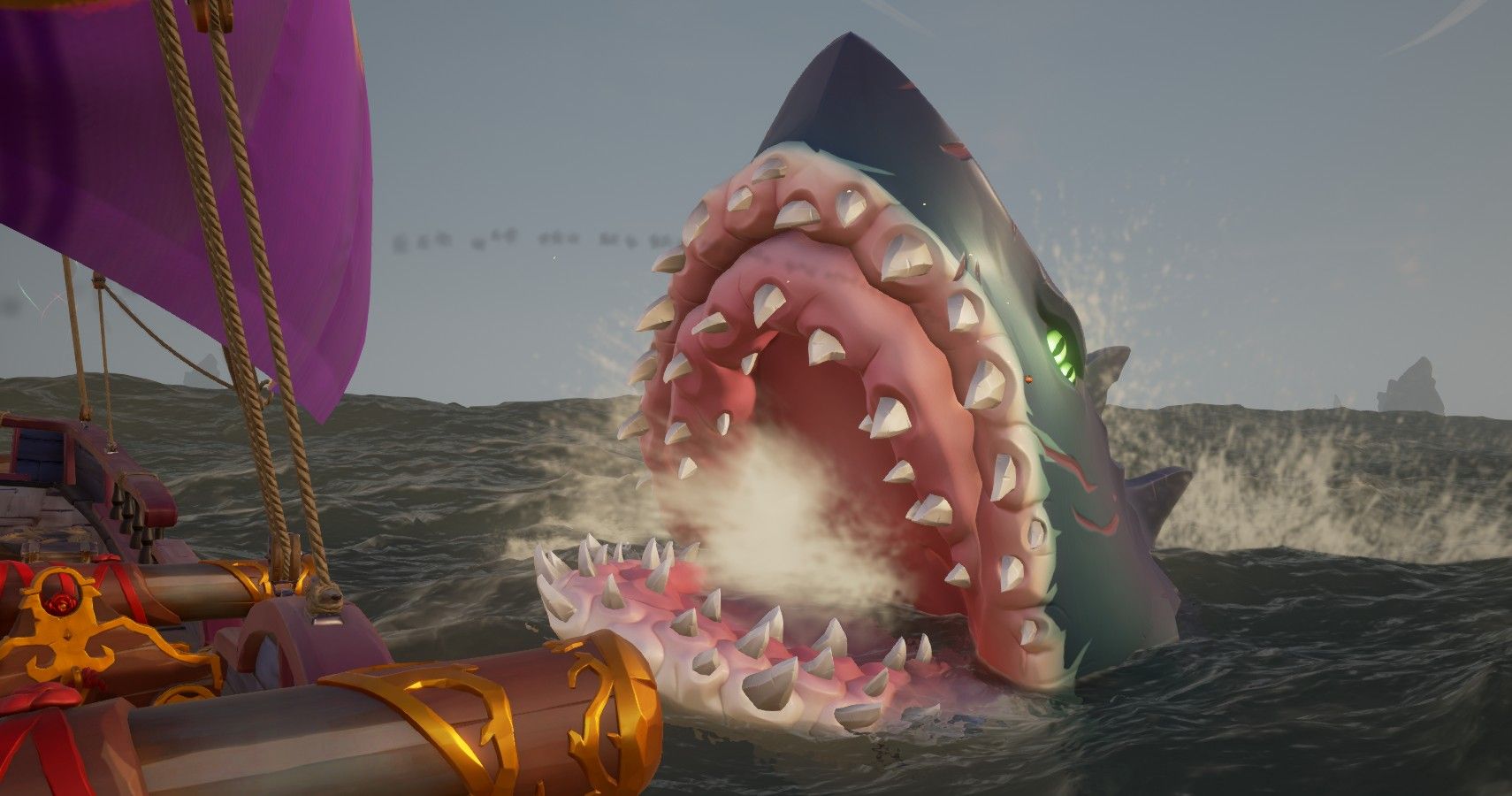 The Experienced Hunter Trials want you tackle some of the toughest creatures in Sea of Thieves, then cook them. The first deed wants you to catch three Trophy Fish. The type and variant of fish doesn’t matter so you can catch any, from any location. You also don’t need to cook or deliver the fish so once you’ve caught the third the deed should complete.

Trophy Fish are larger versions of regular fish and are therefore rarer so it might take a little while to catch three trophy fish, but you can always do this off the back of your ship as your sailing between islands to find the right number. Check out our extensive fishing guide for more information on the different types and variants and tricks on how to catch them.

The second deed wants you to cook and hand in five pieces of Megalodon or Shark meat to the Hunter’s Call. The Hunter’s Call Trading Company can be found at every Seapost in the game, and the meat can be handed in to their Representative at the end of every pier.

To acquire the Megalodon or Shark meat you’ll have to kill them. Both swim around the ocean waters but the sharks spawn regularly, normally whenever a player spends too long in the water. This is the easiest way to farm sharks, so simply anchor down in the open waters and leap in until the sharks start coming for you.

Once you’ve got the shark meat, cook it in on the hob in the ship until golden brown and hand it over the Hunter’s Call. You don’t have to do it in one session either so you can just remember to cook and sell every shark meat you come across playing organically and you’ll probably complete the deed in no time at all.

The final deed in the Experience Hunter Trial wants you to defeat a Megalodon. You might have already done this if you’ve already come across one on voyages since the season started, or have completed the Deadly Hunter Trial.

Megalodons are the huge sharks that patrol the waters of Sea of Thieves and are capable of biting large holes into your ship. You can defeat them by striking them repeatedly with your cannons. For more information and the tips and tricks on fighting these giant sharks, check out our Megalodon Guide. Once the Megalodon is defeated, this deed will be complete.

Next: 10 Fishing Games Ranked By The Biggest Fish You Can Catch 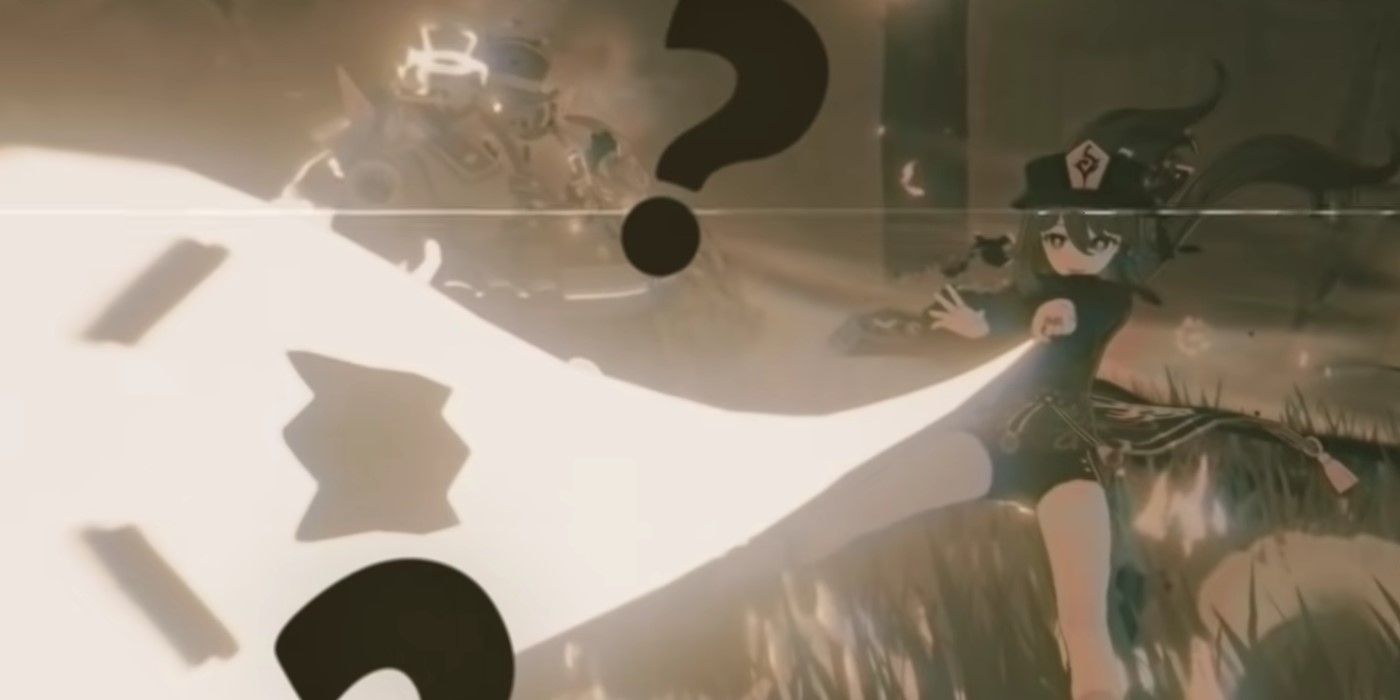