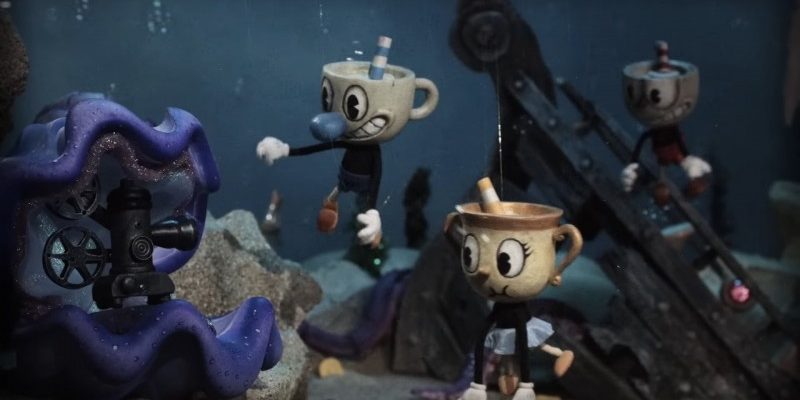 Two months ago, Studio MDHR announced a physical retail edition of its smash hit Cuphead. The charming trailer features physical puppets of Cuphead and his friends out on the high seas, searching for sunken treasure. What they find is news of a physical and collector’s edition of Cuphead. The cute trailer runs at just around a minute long, but the set and puppet designs are intricate, making you wonder just how much work went into creating the trailer.

Today, the studio released a behind-the-scenes look at how its retail partner iam8bit created the sets and puppets of that trailer. You can get a look at the team building and shooting it in the video below.

“A physical edition of Cuphead is something we’ve been excited about for a very long time,” Studio MDHR director Maja Moldenhauer said in a press release. “A big part of the nostalgia that fueled the design of Cuphead centers around the wonderful, tactile experience of getting that game you love off the shelf, opening the case, and diving into a new challenge or grand adventure. There’s nothing quite like it, and we couldn’t be more thrilled with the teams at iam8bit and Skybound for helping us bring Cuphead into players’ hands with the same meticulous care and craftsmanship that underpins how we made the game itself. In a year full of so much excitement here at Studio MDHR, I truly can’t think of a better way to round things out than with this release.”

If you missed the final product, you can see the resulting trailer below.

The physical edition, which retails for $40, includes the base game in a case, its 2022 expansion, The Delicious Last Course, six collectible Cuphead funnies, a Cuphead Club membership card, and exclusive interior art by StudioMDHR. The Collector’s Edition sells for $200 and includes the standard physical edition, a handcrafted marionette of Cuphead, a hand-crank music box, an O-sleeve for game cases, and more.

The physical edition of Cuphead is available today at retailers worldwide and the iam8bit store. The Collector’s Edition is available exclusively at iam8bit for pre-order now, with a shipment window of Q1 2023. Cuphead originally launched in 2017 on Xbox and PC before arriving on Switch in 2019 and PlayStation in 2020. Cuphead: The Delicious Last Course, launched across all platforms in June of this year.