After fighting through a monstrously long labyrinth filled with traps, literal Death, and puzzles in Shin Megami Tensei 5, you finally come face to face with the King of Demons – Arioch. A putrescent, globulous mass of stretched skin, snapping jaws, and the faint glimmer of moist pustules.

Arioch is hideous to behold, and, being a late-game boss, quite the bugger to put down. If you go in without a plan, you might cause yourself mischief. Like with most bosses in the game, to avoid an early death, you need to prepare. 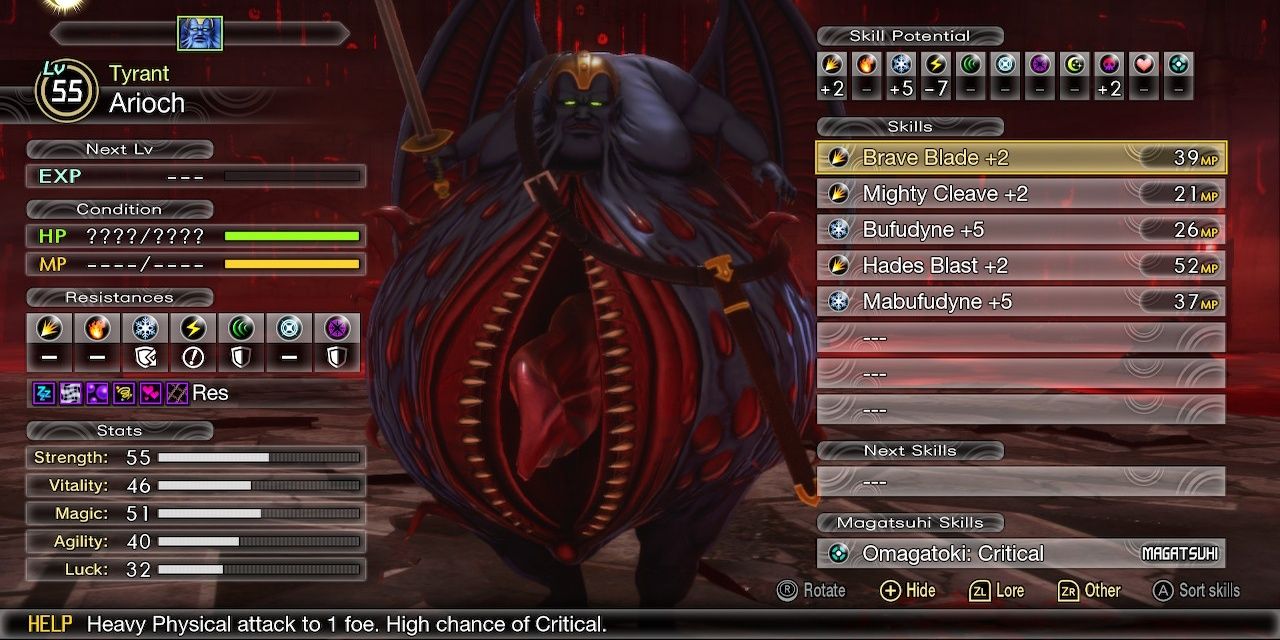 Arioch is a potent Ice mage and a respectable Physical fighter. This, combined with his high stats in both Magic, Strength, and Vitality make him a formidable foe. This is made worse, as you will soon see, by his powerful attacks and love of criticals.

Interestingly enough, Arioch has Potentials in Status, but does not have access to any Status-based skills. He doesn’t even inflict Status ailments as a side effect of his normal attacks.

Arioch has a pretty limited set of attacks, and none of them are difficult to grasp. There are no sneaky ailments to mess around with, no debuffs to remove, and no buffs to counteract. Arioch is a big burly brute, and that’s about it.

Brave Blade is his most threatening attack. It deals heavy damage and comes with a very high chance of nailing you with a Critical. This not only does more damage than usual but will give Arioch a free turn. There isn’t much counterplay here – just suck it up.

Mighty Cleave on the other hand is Arioch’s worst attack. Sure, it has a 100 percent Critical hit chance, but its accuracy is awful. Debuffing Arioch’s accuracy further will make this a dead skill and bring about your turn sooner.

Bufudyne can be pretty nasty. It’s a heavy damaging Ice attack that will do work on most demons – even those not packing a weakness to the element.

Hades Blast, like with Brave Blade, is not a fun skill to be hit by. Whilst it doesn’t have any modifiers to Critical chance, it is still a full party sweep that deals heavy Physical damage. The inclusion of this skill in Arioch’s pool forces your hand when it comes to party composition.

Mabufudyne is Arioch’s Magatsuhi skill, which simply means it's useless. Throw up an Ice Damper or cast Ice Block and you’ll be fine.

Finally, the skill that defines this fight – Call Allies. Arioch will use this ability at the start of the fight and summon two Decarabia to assist.

These guys may look like helpless little starfish, but they are anything but. Packing Megidola and Masukukaja, they can deal heavy Almighty damage to your entire party and raise the Accuracy/Evasion of Arioch (and themselves). Neither of these skills are good news, and they can mess with your game plan.

Arioch is weak to Electric, reflects Ice, and is resistant to Light. This is all fine and dandy as Electric demons are not usually weak to the elements Arioch is throwing out. His demon allies, the Decarabia, are only weak to Light damage, so you will want to focus on that when taking them out. 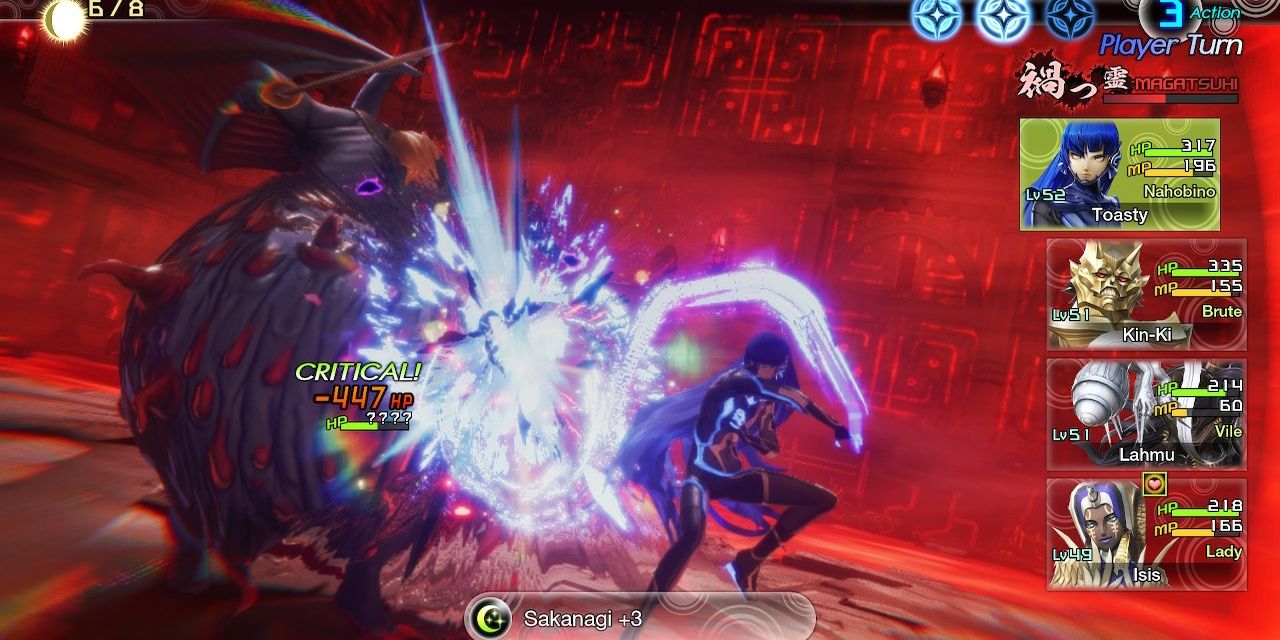 Arioch almost requires two parties to defeat – one party for his allies, and another for the Demon King himself. As a general rule, you want demons who are not weak to Ice, and who can deal Light or Electric damage.

Don’t rule out Physical damage, however. Physical-focused demons are starting to outscale magic-based ones, making them almost universally useful. You will also want some support demons to throw out AoE healing and to debuff.

Lahmu is excellent in this fight. Not only is Lahmu an exceptionally resilient demon, but his default move set is fantastic. His most notable ability, however, is Silt Of Ruin which deals Almighty damage in an AoE and lowers Accuracy/Evasion by one rank for three turns.

This not only helps your team deal with the Decarabia whilst plinking away at Arioch, but it also counters the one buff this trio can put out. Transfer an ability like Spirit Drain or Energy drain onto Lahmu, and he can sustain almost indefinitely.

The only downside to Lahmu is that he’s a Special Fusion, meaning you are going to have to go out of your way to summon him – and that can be time-consuming, or costly.

Kin-Ki is the star of the Demon King’s castle. One of the wandering demons, this guy is a total beatstick. AoE attacks like Deathbound let you deal with the trio easily, and single target attacks, like Berserker God, can dish out the hurt.

On top of this, he has access to Retaliate, which counters Arioch’s many Physical attacks, and Endure, making it impossible for him to die in one hit. If you are willing to transfer skills, Physical resistance can be very helpful, as can Ice resistance and Taunt.

Another Physical Demon, Yoshitsune is just fantastic in just about any fight. His Unique attack, Hassou Tobi, will deal massive damage to Arioch once he is alone, whilst Retaliate will punish him for attacking at all.

He comes with base Physical resistance making him exceedingly tough, and if you transfer Taunt onto him, he can tank like no there's tomorrow.

Isis is a bit of an allrounder. She is a decent healer, whilst also being a potent Electric caster. You will have to level her up a bit if you want her to be top-tier, however, as she is only level 46 when summoned.

That being said, pump a few grimoires into her, and she should be golden. She has access to Zionga which will generate bonus turns and do great damage to Arioch. You may want to transfer some healing spells like Bowl of Hygieia and Media onto her.

Anubis will be well past his prime at this point without some serious intervention. That being said, he is still very handy in this fight providing he’s been levelling up. Anubis is a great Light magic user and can be very useful when you are still trying to deal with the Decarabias that are supporting Arioch.

Just about any demon capable of dropping a heal or buff will do here, but a focus on AoE healing is desired. Of all the demons available, however, there is one that really shines in this fight:

Dominion is a fantastic support demon with easy access to Heal Pleroma and Bowl of Hygieia through transfer. She is also capable of dealing massive amounts of Light damage with Hamaon, speeding up the early portions of the fight.

Sarasvati is interesting, not because she does damage in this fight, but because she is immune to Ice damage (handy), comes equipped with a Defense debuff that can speed up the fight nicely, and has access to Donum Gladi.

Donum Gladi greatly increases the damage of the next Strength-based attack used by one demon. Sarasvati casting this on Yoshitsune, Kin-Ki or Nahobino can result in huge damage numbers – it also saves a skill slot on more important demons.

Sarasvati’s placement in the party order is also important, as you want her to act before the demon you are buffing activates. 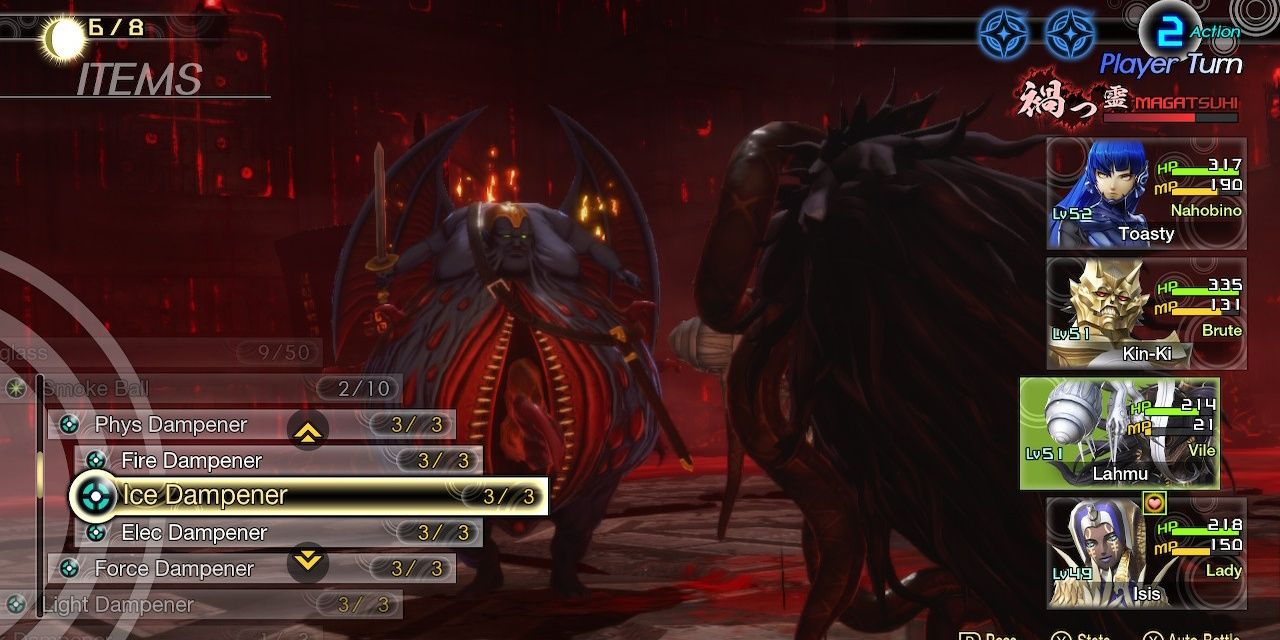 You have two paths you can go down when fusing Nahobino. Firstly, you can gain Ice Resist/Block and use this to steal free turns whenever Arioch tries to land a Bufudyne on you. Alternatively, you could go with Physical resistance and tank his strong Physical attacks.

Neither are bad choices, but Physical covers more, and will likely serve you better. You could also try and grab Taunt to garner as much attention as possible and keep your team alive – although this is risky on your main.

For attacks, Sakanagi continues to do work for a Strength-based Nahobino, with Wrath Tempest being excellent on a Magatsuhi turn – rivalling the destructive power of Yoshitsune’s Hassou Tobi.

Magically-inclined Nahobino will want to bring a mixture of Light and Electric magic to nab as many bonus turns as possible. Regardless of Nahobino, consider transferring Spirit or Energy drain to keep yourself topped up.

As always, Kannabi Veil can massively increase your party's defenses and is a fantastic skill to keep in your pool.

Dampers are generally always recommended when it comes to fights. Buying three Ice Dampers for 450 Macca will remove an entire turn from Arioch every time he enters Magatsuhi. You can also cast Ice Block, which is an easily obtained and transferable ability.

Electric Shards and Electric Gems are super helpful for when you're in a pinch, such as if all your Electric demons are killed during the fight. You might not need them, but having them as a backup isn't a bad idea. 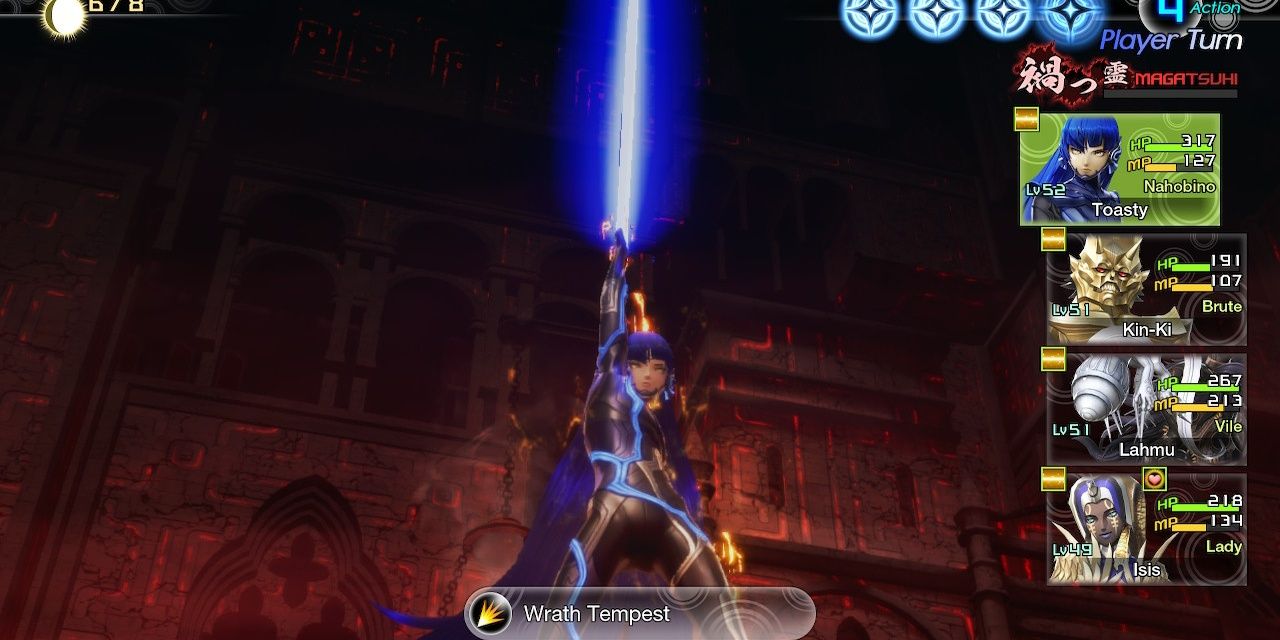 For an easier fight, you will want to kill off the two Decarabia as soon as possible. It’s unlikely you’ll be able to kill them both in one turn, but you should have the punch to down one – especially if you go in with a full Magatsuhi bar.

Debuffing Arioch’s Accuracy is key in this fight, as it will massively reduce the likelihood of him landing a hit on your party. This also reduces the number of turns Arioch has per round. During the early fight, this is especially important as the Decarabia can buff Arioch’s Accuracy/Evasion stat.

Once his Decarabias are dead, swap out demons if you need to and focus on the big guy himself. Kannabi Veil can help mitigate when damage does hit your party, but in general, hit him with everything you have whilst keeping his Accuracy/Evasion stat as low as possible.

Repeat this for a few rounds, and the Demon King will go down, letting you can move on.