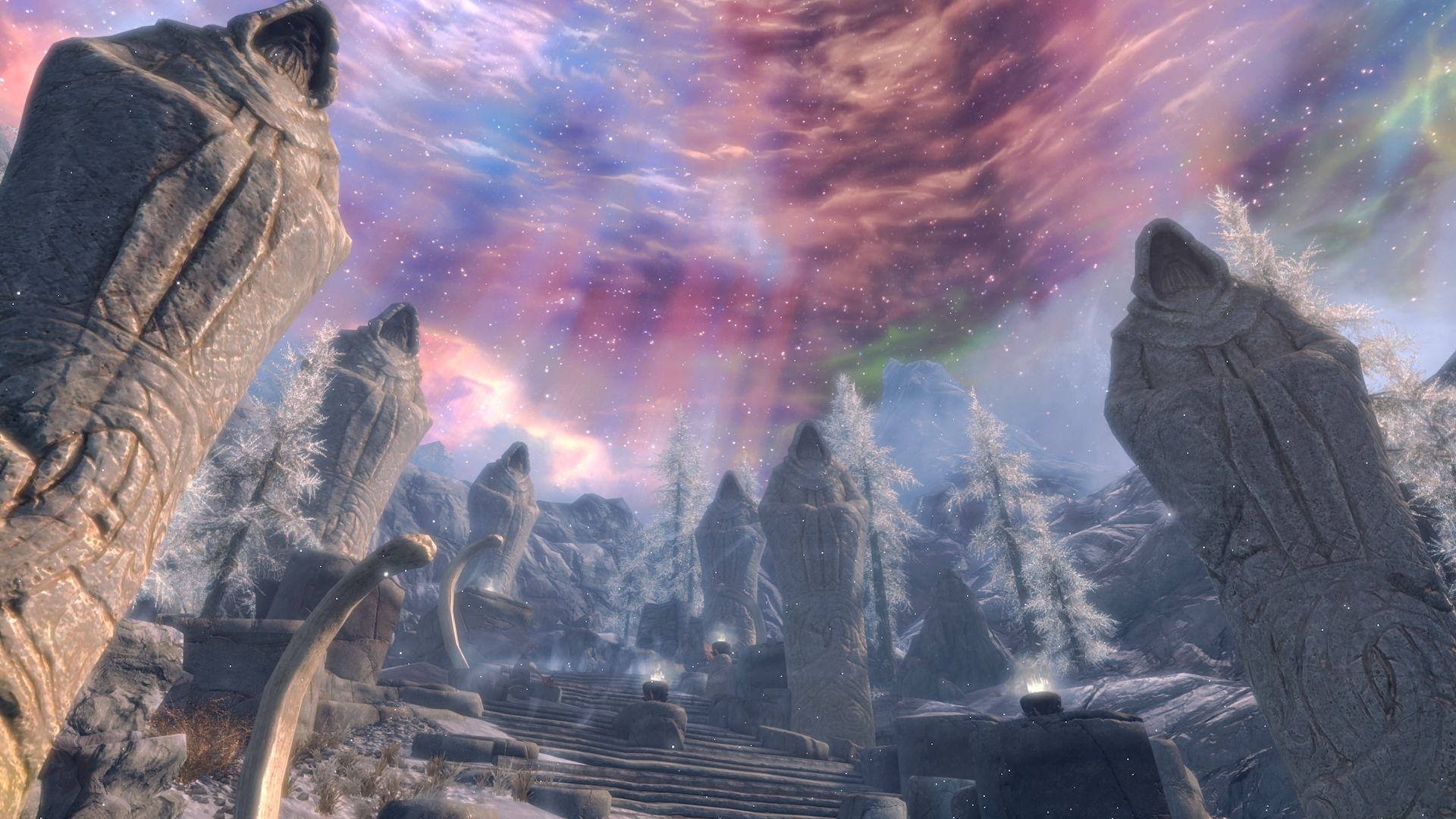 The Elder Scrolls 5 beats GTA 5 to the punch by being released at full price for three generations in a row – but is Skyrim still worth it?

Role-playing games used to be the preserve of pen and paper, relying on verbal descriptions of an otherwise intangible fantasy world. Brought to life solely in players’ minds, their chance encounters and battles were decided on the roll of arcane sets of dice. In the early days of video games, the chance to experience such an adventure without needing reams of paper and encyclopaedic instruction books was instantly appealing.

It was also nice to be able to see what was going on, rather than just using your imagination. Being attacked by a towering, fire breathing dragon is a more visceral experience when you can hear it than when someone simply tells you about it, and the Elder Scrolls series was built on the principle of letting players experience the full richness and depth of life in a fantasy world.

The first four games in the franchise were released between 1994 and 2006, while its most significant episode, Skyrim, came out in 2011. Apart from MMO spin-off The Elder Scrolls Online, since then Bethesda has only updated and re-released Skyrim, with The Elder Scrolls 6 still no more than teaser trailer material. The question in most gamers’ minds will be, how much is too much?

Returning, once again, to Skyrim after its decade of re-releases is a familiar process; its opening, ‘Good, you’re finally awake’, having long ago descended into meme fodder along with so much of the rest of the game. Arrow to the knee, ‘You never should have come here’, and the other oft-repeated phrases uttered by town guards and other characters across its snowy wastes have made it recognisable to the point of comedy, and the Anniversary Edition only hammers that home further.

The biggest improvement here is the absence of load times on next gen consoles. It is very refreshing to explore without continual interruptions, but beyond that the changes are mostly graphical – a sharper, more defined world making its presence felt right from the start. Gone are the days of casting about looking for a blurry chain to pull, or accidentally stepping on a fuzzy floor pad and triggering a spiked gate to swing into your face. Now everything is in focus, making those missteps entirely your fault rather than the result of a foggy interface.

Skyrim may not have the subtlety and motion captured realism of more recent games but its vistas have a renewed beauty, with brighter colours and longer draw distances. Spending time in its seemingly endless landscapes remains a singular experience, but one that is inevitably tempered by a decade of progress. Skyrim is the land that time forgot.

Nowhere is that more obvious than in its spoken encounters. Characters may move their mouths when they talk but the standards for both voice-acting and performance capture have come a long way in 10 years, and Skyrim’s human faces were never very good to begin with. It still hangs together, but all too often the grandeur is lost as you wince at the low-tech spectacle.

For example, when speaking to Whiterun’s jarl, his court wizard and a guard mistakenly trigger their own lengthy speeches, flatly talking over one another and making it all but impossible to pick out what any of the three are saying. While far from catastrophic, it’s an issue so frequently repeated you wonder how it’s possible for a remaster running on a PlayStation 5 to suffer the exact same problems it used to on the PlayStation 3.

Characters still walk like C-3PO, their lower halves shuffling along as though only peripherally connected to their torsos. Wolves look so small and skinny you’re tempted to stop and feed them rather than incinerate them with a fireball. Menus are a faff using a joypad, and you’ll spend just as much time wallowing in them as actually playing the game. More so if you engage the game’s new survival mode, that forces you carry a lot less, does away with fast travel, and means you need to eat, sleep, and stay warm to keep your character alive.

Combat is as clunky as ever, with melee entailing little more than aimlessly pumping the trigger until your stamina gets low, then either retreating for a bit, or using food and potions to top yourself up before continuing the pummelling. Magic and archery are more skill-based, but most players will find themselves using a combination of those and will inevitably have to suffer through more than their fair share of brainless slugfests before the final credits roll.

There is a scattering of new material. Along with the three original DLC expansions – Dawnguard, Hearthfire, and Dragonborn – the Anniversary Edition adds user generated content from the Creation Club. Find the Riften Fishery and you can become a fantasy angler anywhere you see a patch of water, and the new Saints and Seducers quest line is triggered when you run into a randomly spawning Khajit caravan. There’s also a range of mods you can apply to fix 60fps, add horse armour, alter monsters and foliage, and add new locations – although many need to be purchased separately with actual money.

The rest simply bulk up the range of ingredients and potions you can acquire, and add new spells, weapons, and armour. In volume terms there’s a lot to find, and while it does mean there are fresh accoutrements to discover, none of them individually makes much difference to either the structure or content of the game, feeling more like a minor shoring up around the edges.

And that’s the heart of the problem with Skyrim Anniversary Edition. It costs nearly £50 as a standalone game. Owners of Skyrim Special Edition can pay an upgrade fee of £15.99 to access the Anniversary content, and if you own a PlayStation 5 or Xbox Series X/S, the next-gen upgrade is free once you’ve purchased the rest of it, but in terms of value for money, you’re getting a lightly spruced-up decade old game, with a sprinkling of user generated content, that’s still fundamentally the same game we’ve all been buying since the 2010s.

There is still fun to be had. Setting off into the wild blue yonder to seek your fortune and impose some good old Dragonborn justice on the people you meet remains alluring, even if by this point it’s hard not to feel as though you’re not really exploring anymore, so much as feeling around for triggers for dusty old rose-tinted memories. But the game does look better, even if it doesn’t look actively good.

It’s the cynicism that sticks in the craw though. Charging full price for a title that’s not a remake but is simply the same game with all its Xbox 360 era glitches and mechanical shortcomings, feels like a slap in the face. It’s a money maker pure and simple, and Bethesda can hardly be bothered to disguise it.

If you’re new to games or somehow managed to miss the thundering hype of Skyrim’s original and multiple subsequent releases, there’s entertainment here to last hundreds of hours if you’ve got the right temperament. For everyone else, this is the barest of retreads on a game that you could practically play in your sleep.

In Short: Skyrim is back yet again, with a graphical makeover and new user generated content, but at full price even fans of brazen commercial cynicism will find their eyebrows quietly reaching for the sky.

Pros: Higher resolution visuals, longer draw distances, and more colourful views abound. The game may be getting a bit crusty, but its sense of scale and constant progression remains compelling.

Cons: It’s a re-release of a decade old game that’s already appeared on almost every format you can think of, and always with the same old bugs and glitches. Very expensive and with so little extra content you’d be hard pressed to find any of it without reading a walkthrough.