Each mission in Sniper Elite 5 has many unique third-person shooter qualities, and Occupied Residence features one of the most beautiful maps in the entire game. There are many fields to explore around the area, along with a beautiful chateau that you'll get to invade as well. There's simply so much to love about Occupied Residence as a mission.

The third-person shooter action is better than ever in this mission, which is great since it's one of the first missions you'll experience. There are ideal methods for tackling each objective that this level has to offer, so here's a guide and a few tips for each of them.

How To Start The Occupied Residence Mission 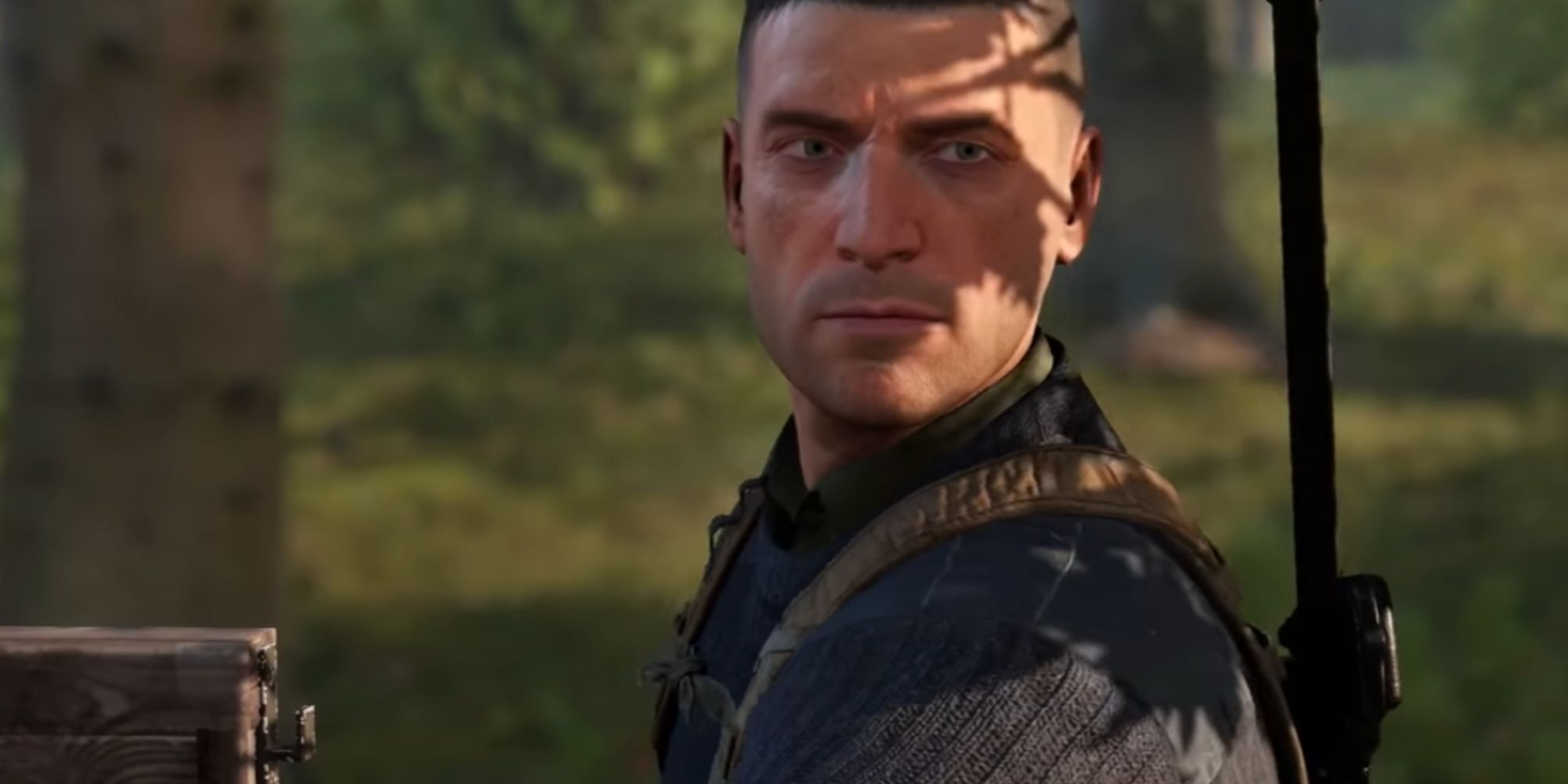 After launching Sniper Elite 5, you can click on Campaign and start customizing the settings to your liking. There's a customizable difficulty option, along with lots of other settings that you can change before jumping into the mission.

You also need to decide whether to activate Axis Invasion because once it's on, other players can invade your mission and try to kill you during the match. The Axis Invasion mission is on by default, but you can turn it off before starting the mission or in the pause menu while the mission is in progress.

As long as you've completed The Atlantic Wall, you can start Occupied Residence from this screen. As soon as the match begins, a cutscene will play, and Karl Fairborne will load onto the map, which will allow you to start exploring at your own pace. 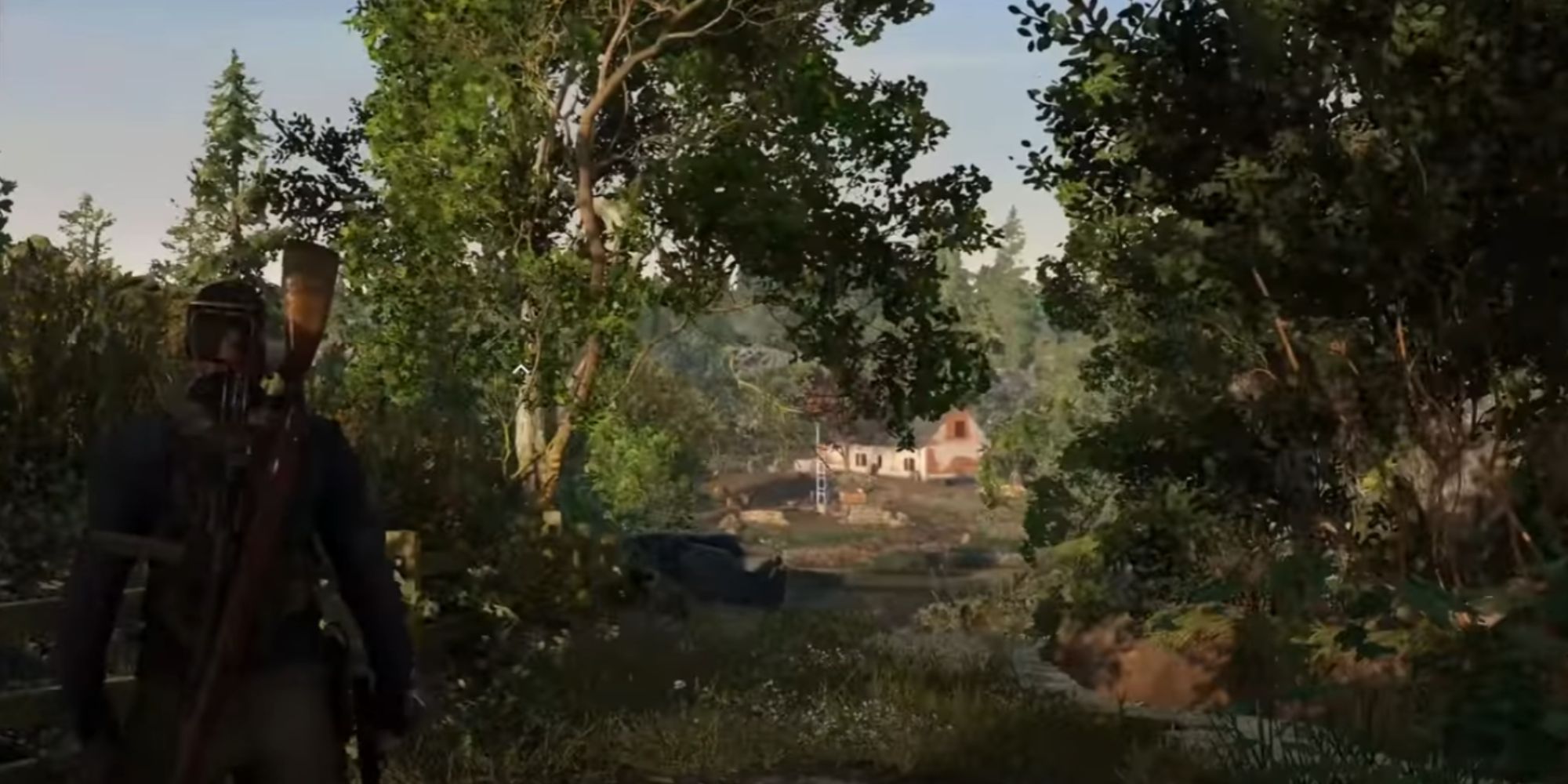 After spawning in, you'll see a linear path you can travel down. Shortly, you'll come across two possible pathways, one left and one right. You can choose either way, but the right path will lead you through an easier route, so we recommend this one.

Continue on the right-hand path until you reach a field on the other side of the road with a house on the right side and a radio beacon in the middle. 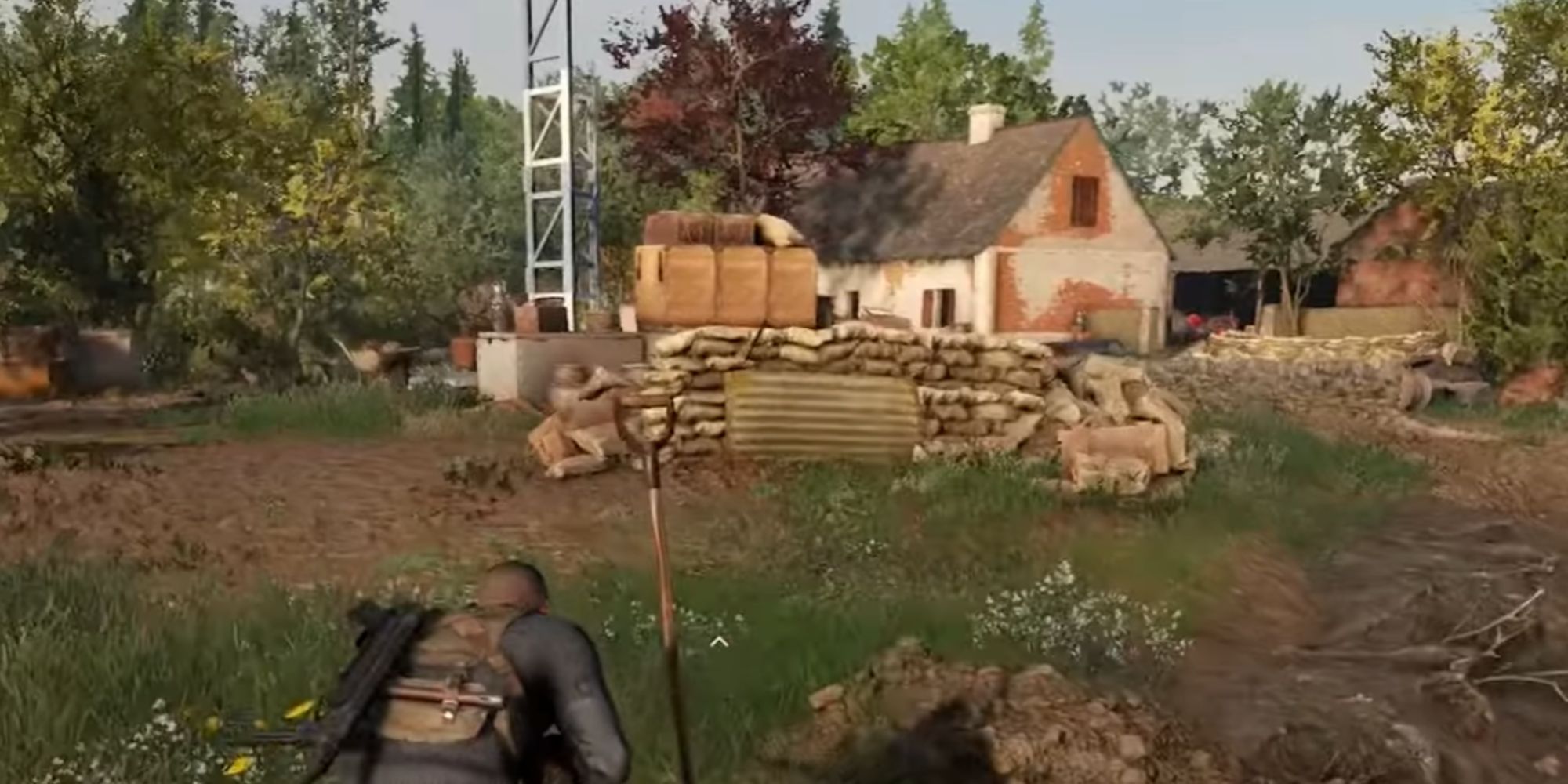 There are a few soldiers that are inside the immediate area, as well as many others that are on the outskirts of this piece of land. You can use the grass nearby to sneak your way to the enemy soldiers, then use melee stealth attacks to defeat them individually.

There's one soldier standing next to the beacon in the middle of the field, while multiple others inhabit the building's interior and exterior on your right. You can avoid fighting the soldiers in the right-side house by advancing stealthily through the grass.

There are roads nearby that vehicles drive down, so hide behind cover if you see them coming. 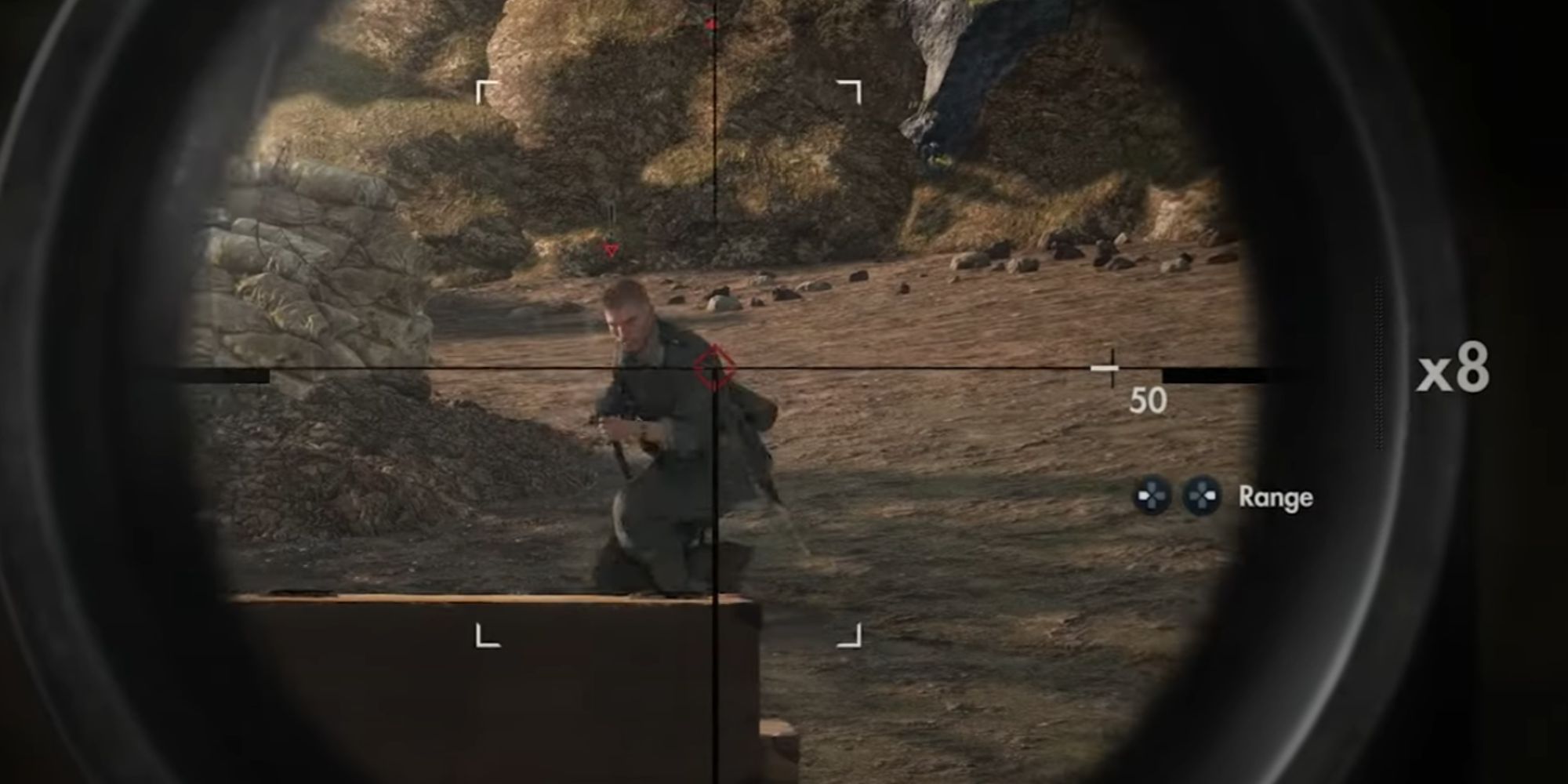 Upon defeating every enemy in the area or simply sneaking through the grass, you can travel north past the house and radio beacon to find a small river with four soldiers guarding it. Most are regular soldiers, but there is one that's operating a mounted gun on the river's left-hand side. More soldiers may be present at the river if you get into a gunfight since enemies behind the river will run to aid their allies.

There's a ledge that you can use as a hiding spot on the right side of the river, which allows you to kill the soldiers with a silenced rifle before continuing past the river undetected.

Once you cross the river and climb up the hill past it, there are multiple soldiers walking around the area, but just hide in the grass nearby, and you'll be safe. You can slowly advance through the grass defeating soldier by soldier using melee stealth attacks, toward the chateau building with the quest marker. 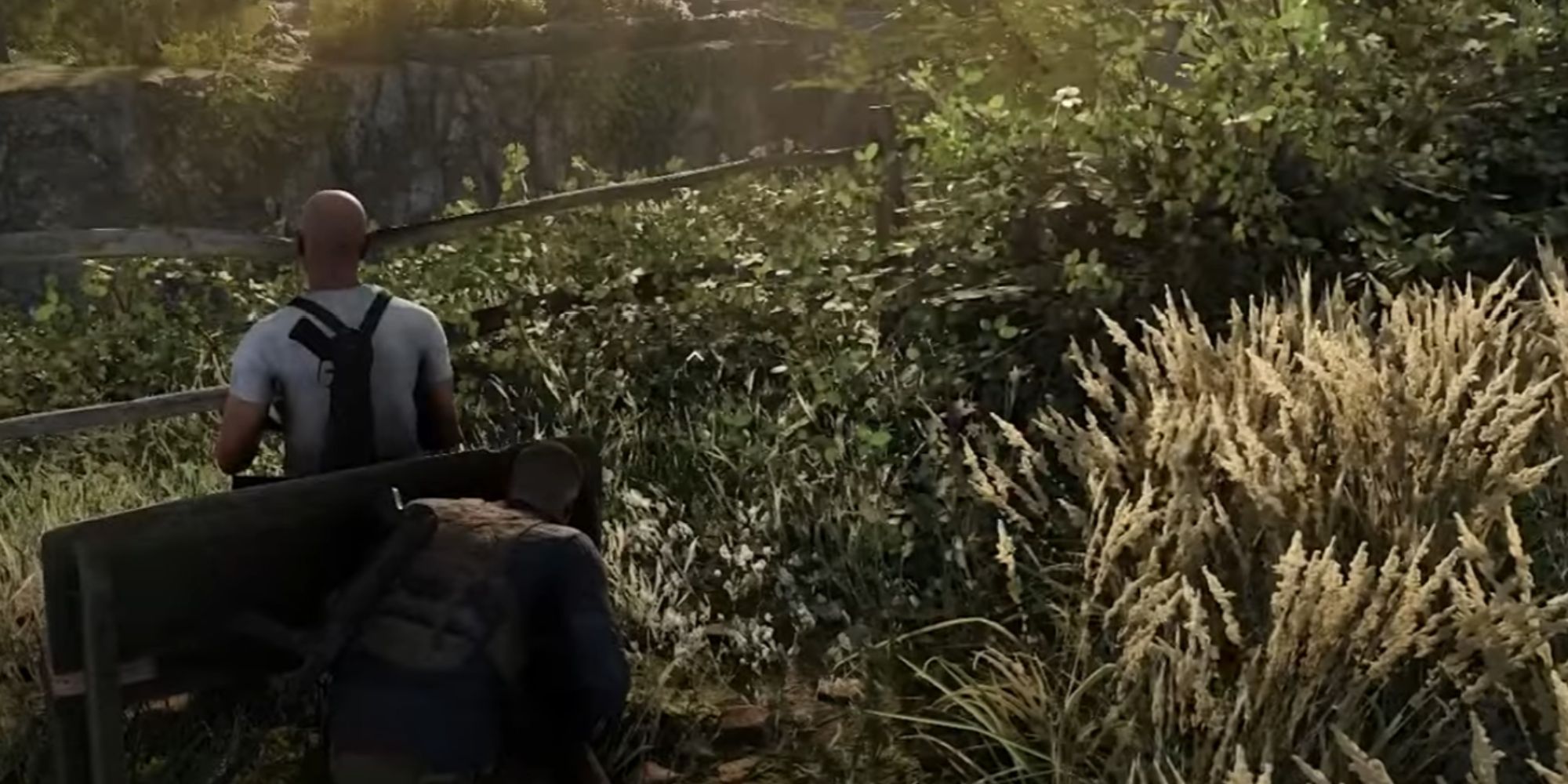 Take a left when the path splits; there's a final patch of grass on the left side, so you can use it to hide and defeat any soldiers that happen to be walking down this road while you're on it. Once you advance further toward the chateau, there are lots of soldiers surrounding every side of it. 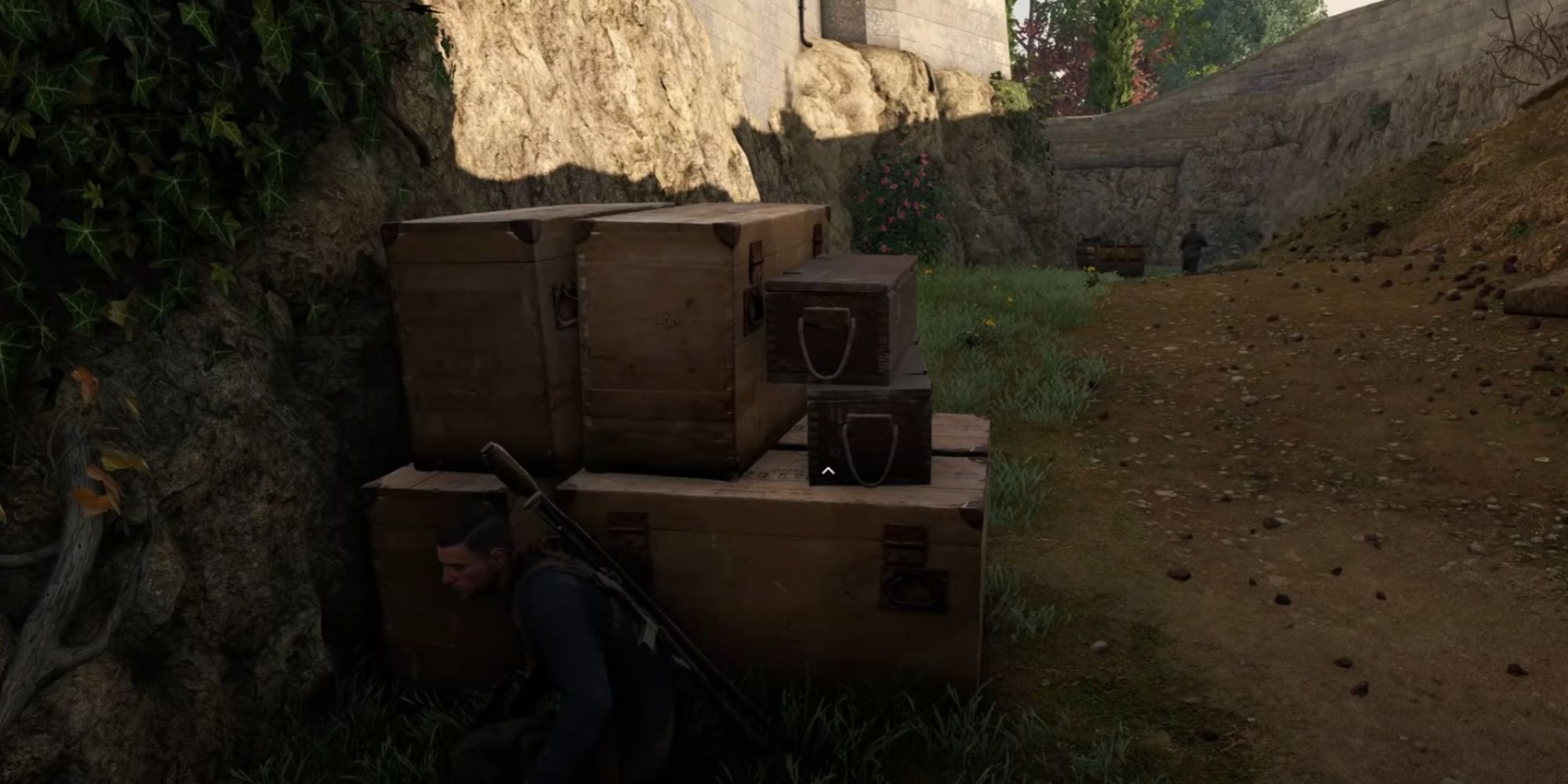 Soldiers walk around throughout these trenches, so make sure to use crates and other objects as cover. Only use melee attacks and silenced weapons here since you're in close proximity to many enemies. 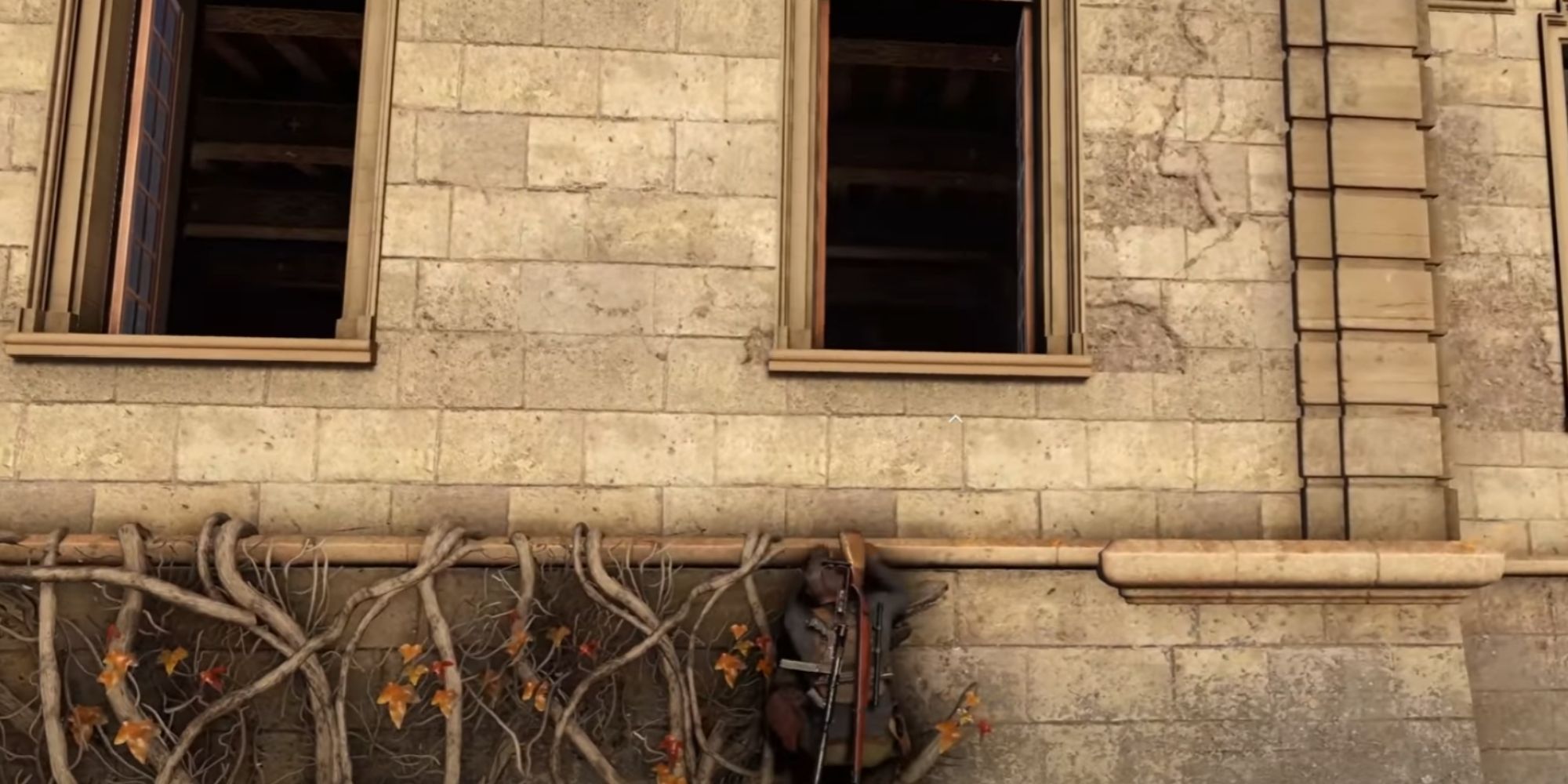 On the right side of the trench, you'll see vines on the chateau's wall. You can climb up these vines and into the nearby building to enter a dining room, which is full of enemies, so you need to crouch as soon as you jump through the window and hide behind cover on the right-hand side of the room.

You can also throw a bottle inside the window before jumping through it, which may distract any soldier that happens to be next to the opening. 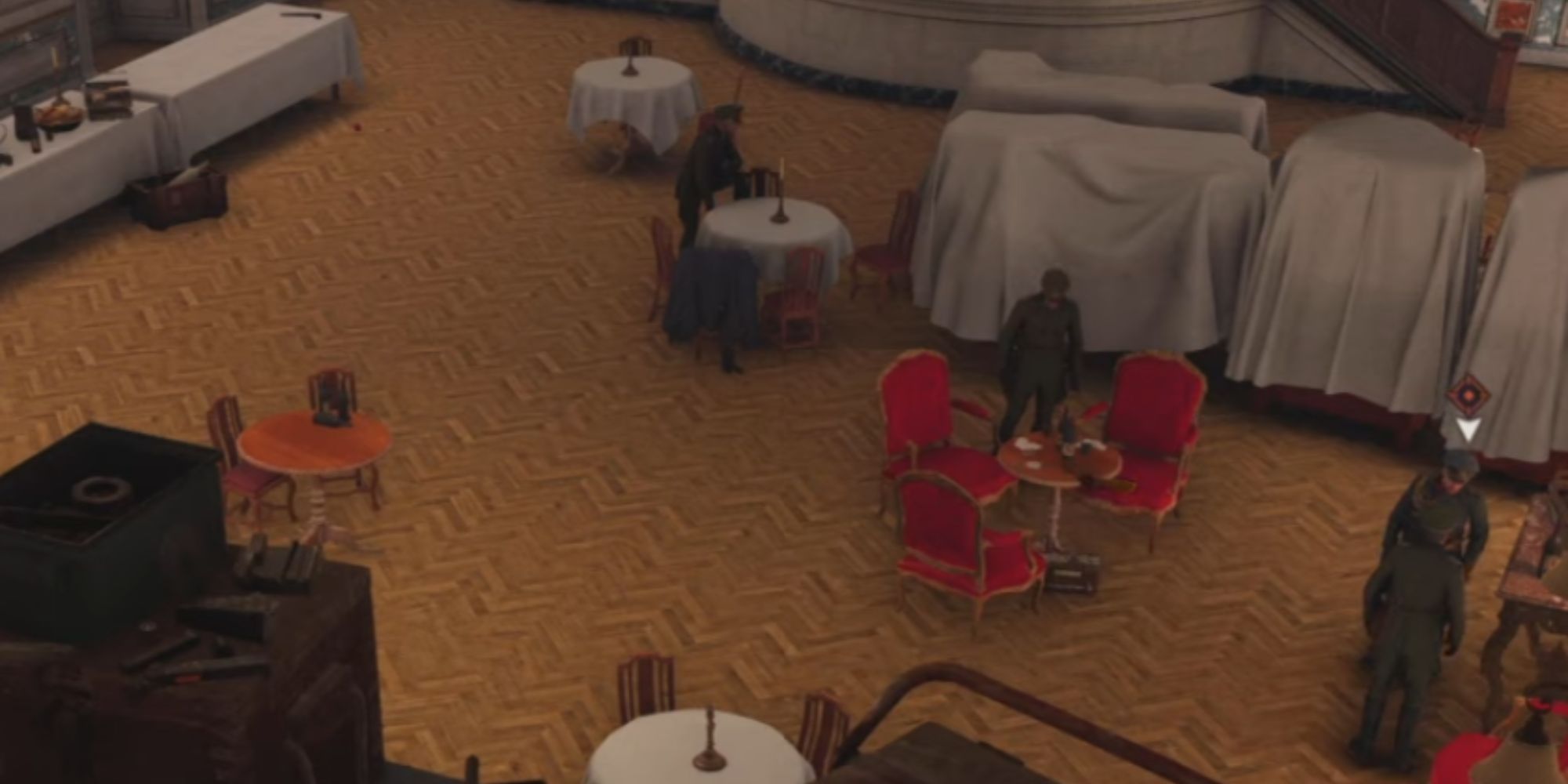 Upon climbing in the window via the vines, you'll enter an open room with many tables meant for a banquet. There are four officers inside this room by default, but you can kill or incapacitate each of them using melee attacks. Before killing them, wait for Kummler to finish his speech.

If the officers are near each other when you want to kill them, then you'll need to hide behind objects in the room and whistle to get them to move away from their allies. You can also throw a bottle to lure an enemy away from a further distance. Regardless, attack enemies one at a time while crouching; otherwise, you'll alert everyone in the room.

After all four of the officers in this room are dead or incapacitated, wait for Friedrich Kummler to enter the room via the door at the front. Once he enters, sneak up behind him and use a melee attack or silenced weapon to finish the job. 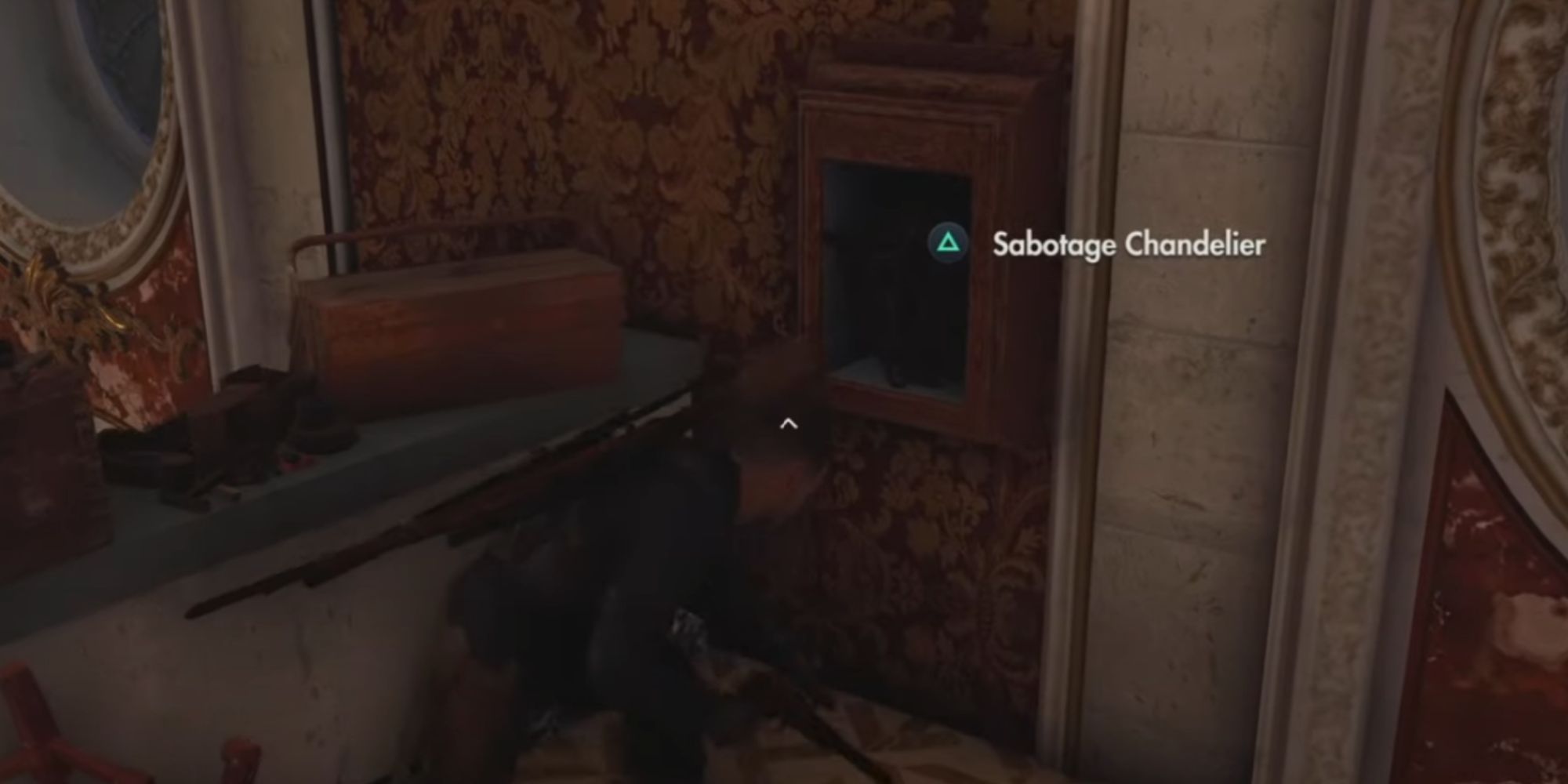 If you kill Kummler by dropping the chandelier in the dining room on top of him, then you'll fulfill the bonus objective. Exit the room via the front door after all four officers are dead, then use the staircase on the left-hand side to climb up to the door on the floor directly above you. This door leads to a balcony overlooking the dining room.

Pick up Kummler's Office Key from his body after killing him. 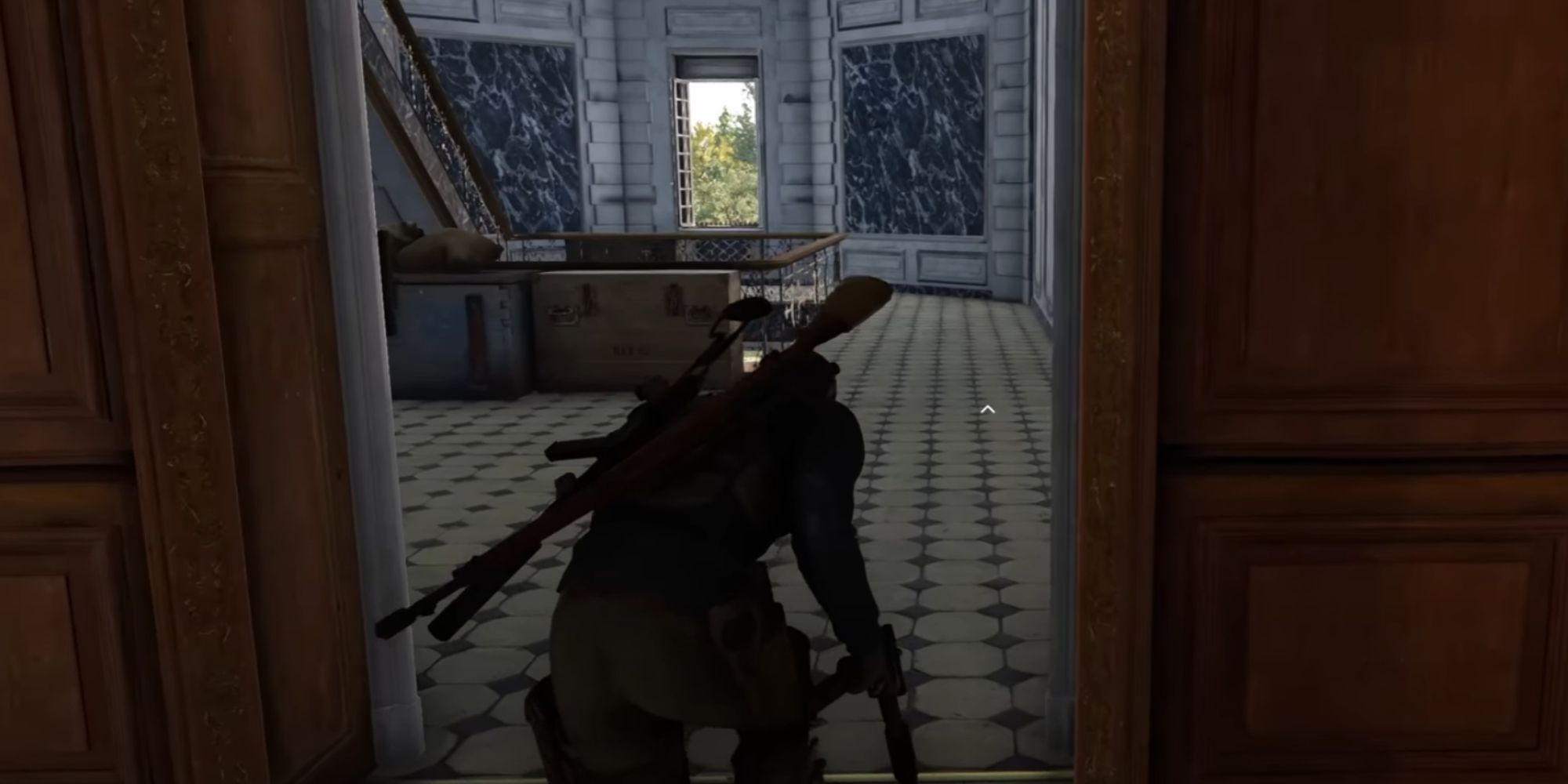 Now that Friedrich Kummler is dead, exit the balcony and travel to the third floor using the staircase. After climbing the staircase, head through the door, and you'll find a half-outside hallway, like the one in the picture below. 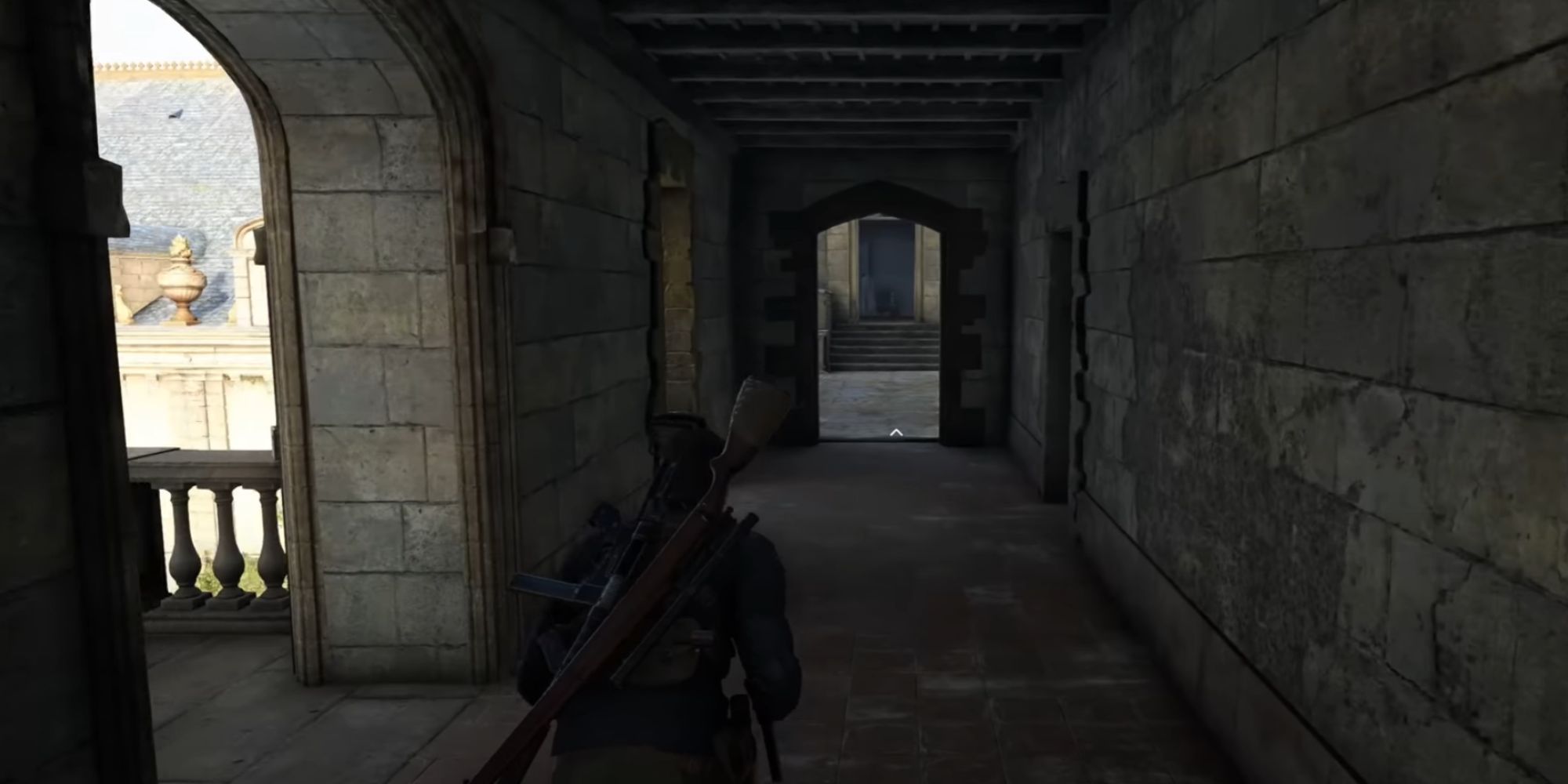 Keep moving in a straight line through this hallway towards the quest marker, and you'll eventually reach a door leading to another hallway on the other side. There are soldiers that can patrol these hallways, along with the tunnels and rooms on the hallway's side. Be cautious and always be ready to duck and cover. A silenced secondary weapon is also useful here.

There's a door on the left-hand side of this hallway you can lockpick or use Bolt Cutters to open; the door is right next to the second hallway's entrance. Drop down through a hole in the floor past the door, then turn the statue's head, as you see below. 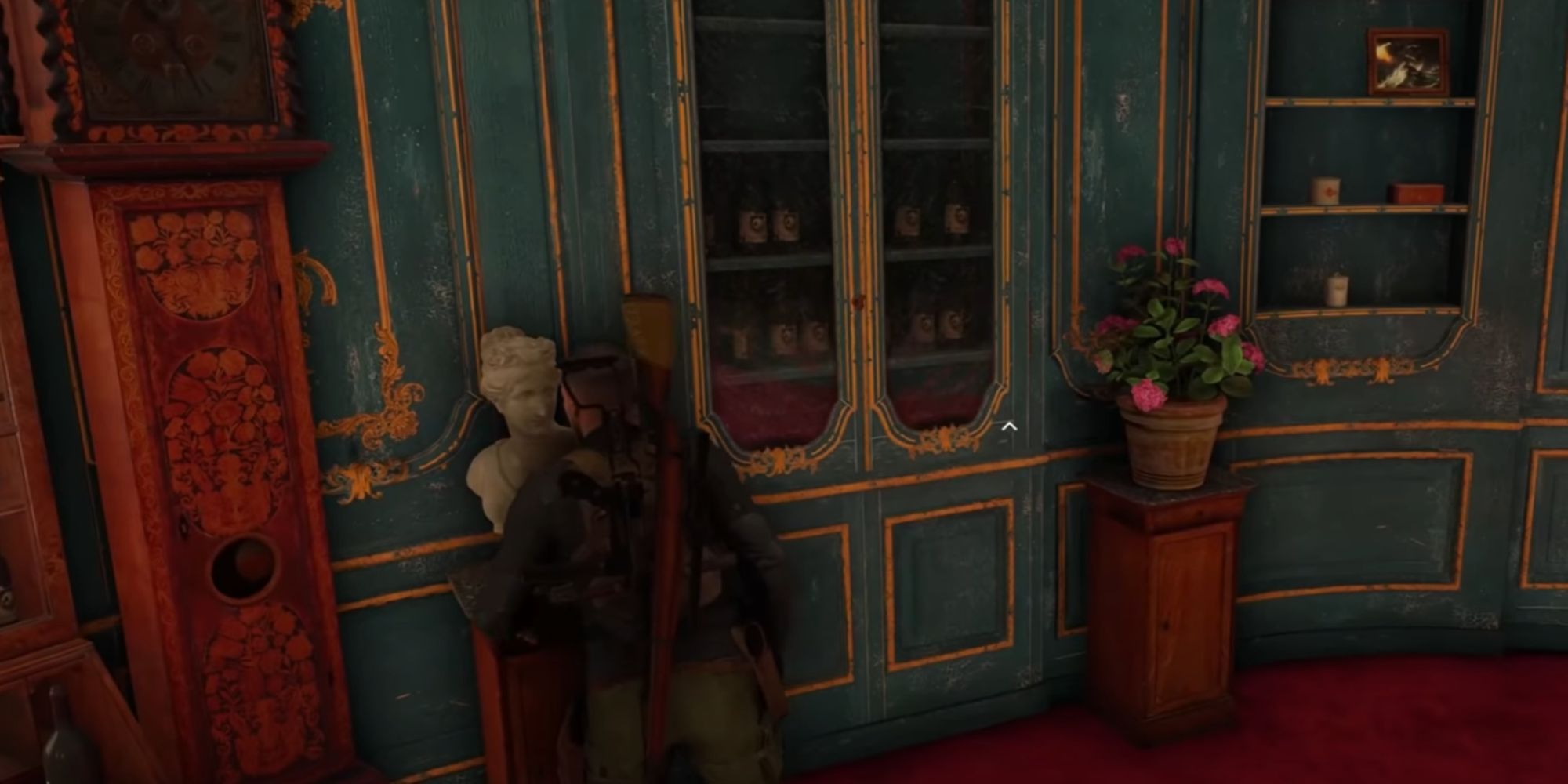 Turning the statue will reveal the secret door, and you can gather the intel inside. The OPERATION KRAKEN and Grateful Thanks documents are inside this room. After you pick up each of the documents inside the secret room, you can exit by climbing through the hole in the ceiling that you entered through to avoid encountering soldiers. 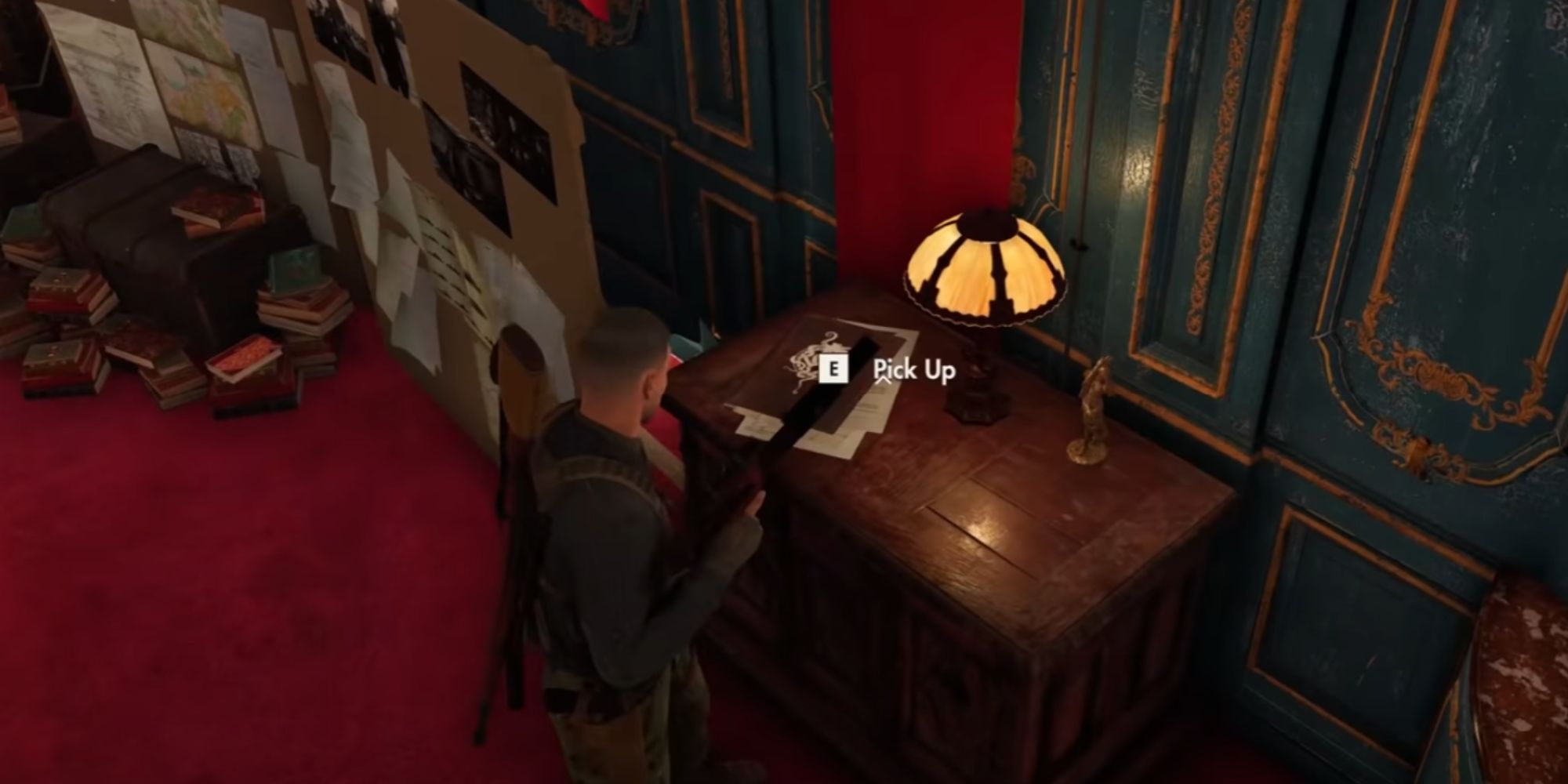 Next, you can either complete the final optional objective or exfiltrate immediately. If you want to finish your optional objectives, you'll first need to travel toward the southern section of the chateau to an office with the Do Not Fail Me, Nephew document. 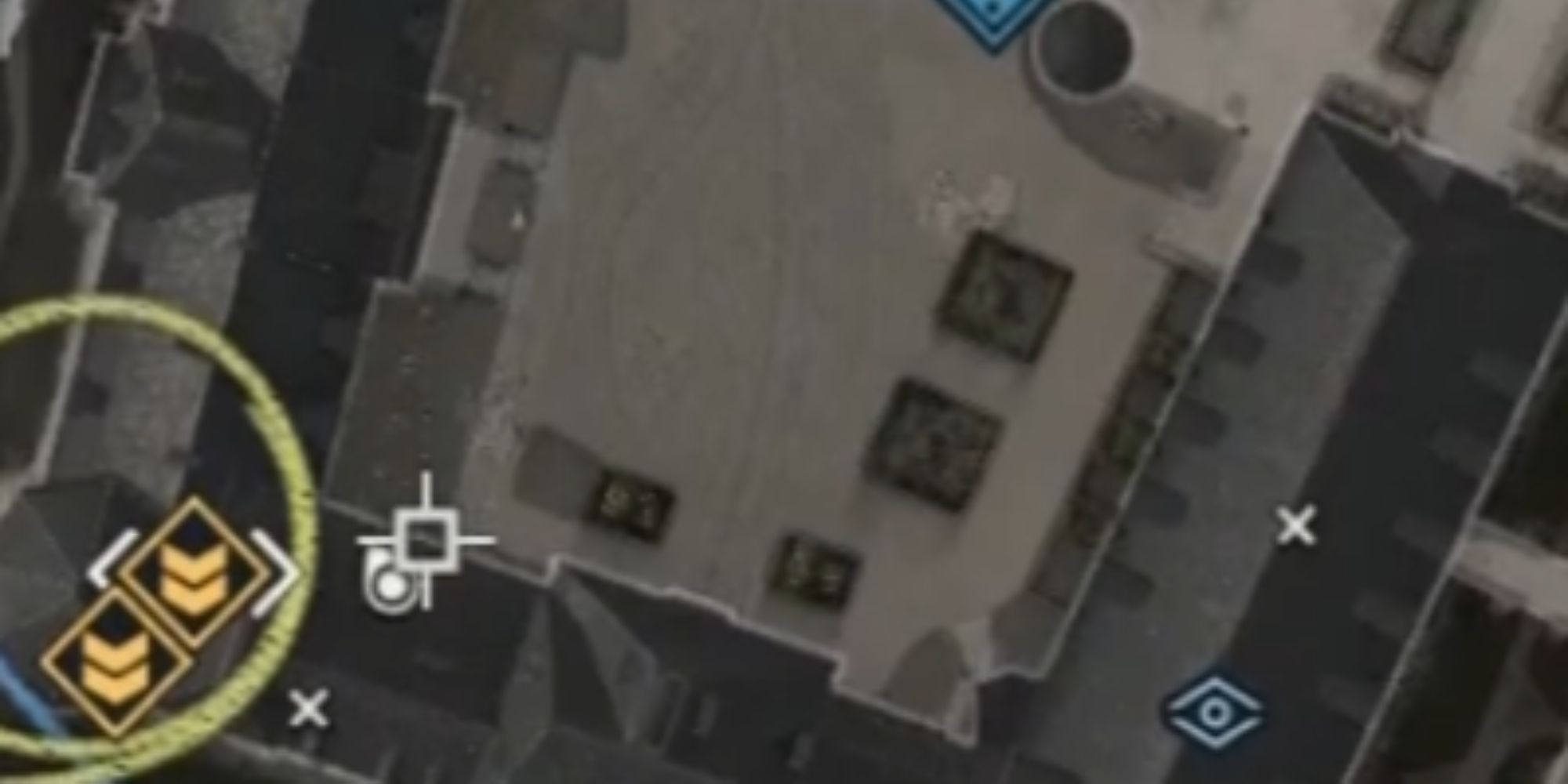 Before you start this objective, you can learn the combination for Friedrich Kummler's safe by picking up the Do Not Fail Me, Nephew document from a desk in the room above. There are soldiers patrolling outside this room, so stay quiet and use distractions like whistling to lure them into stealth attacks.

The white squares represent the exact location of each point of interest on the maps for this objective. 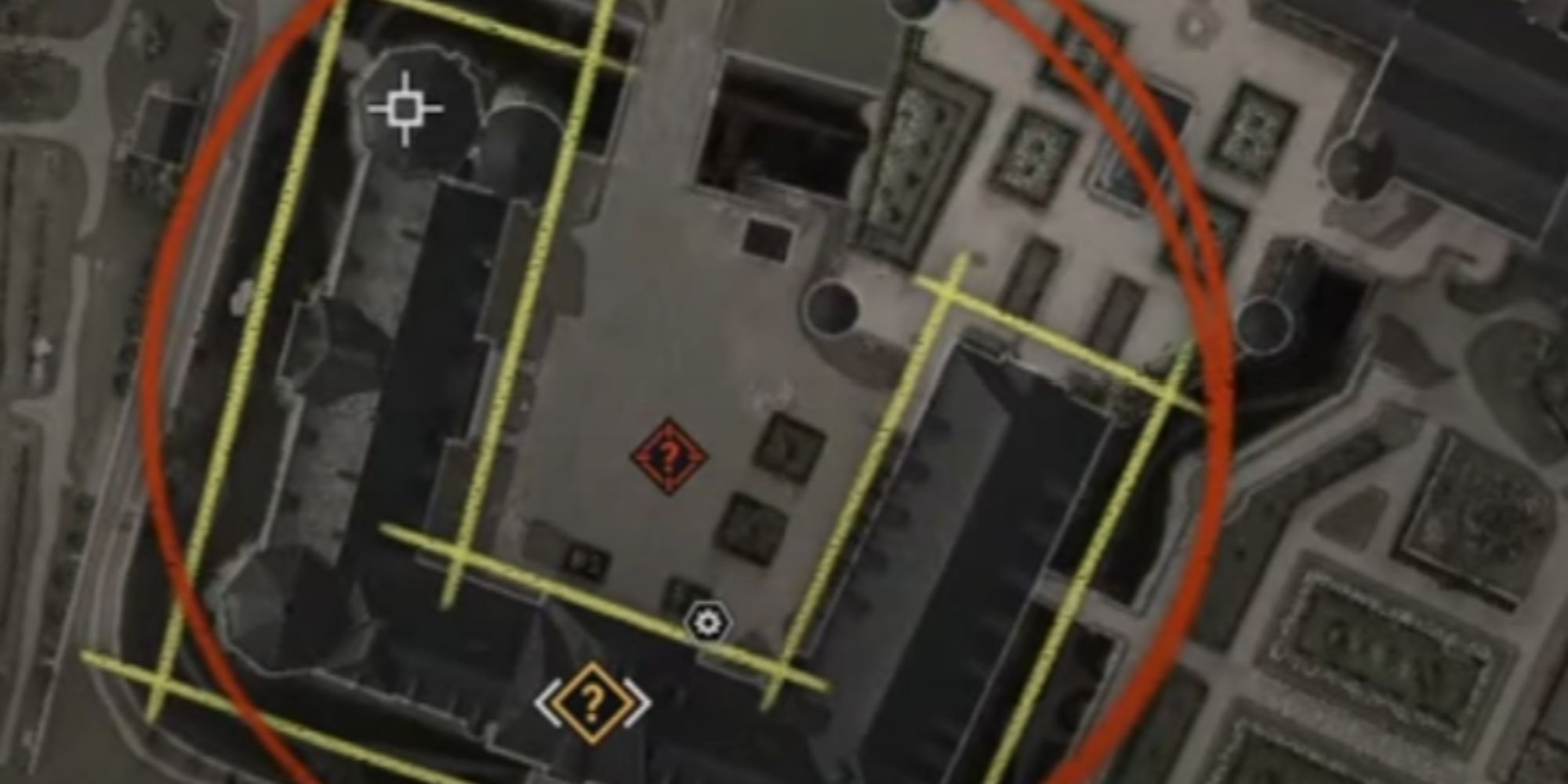 The Old Man Statuette is the first antique you can collect in the Occupied Residence mission. Travel to the location above, which is Friedrich Kummler's bedroom. Take caution to sneak past or defeat any soldiers you encounter outside Kummler's bedroom as soldiers patrol the hallways inside the chateau. There's a chest in front of the bed, which features the Need A Scapegoat document.

Interact with the portrait on the left-hand side of the bed, which contains a secret safe. After you take the painting down, you can unlock the safe using the combination you learned from Friedrich Kummler's office earlier. Then, you can pick up the Old Man Statuette from inside it. 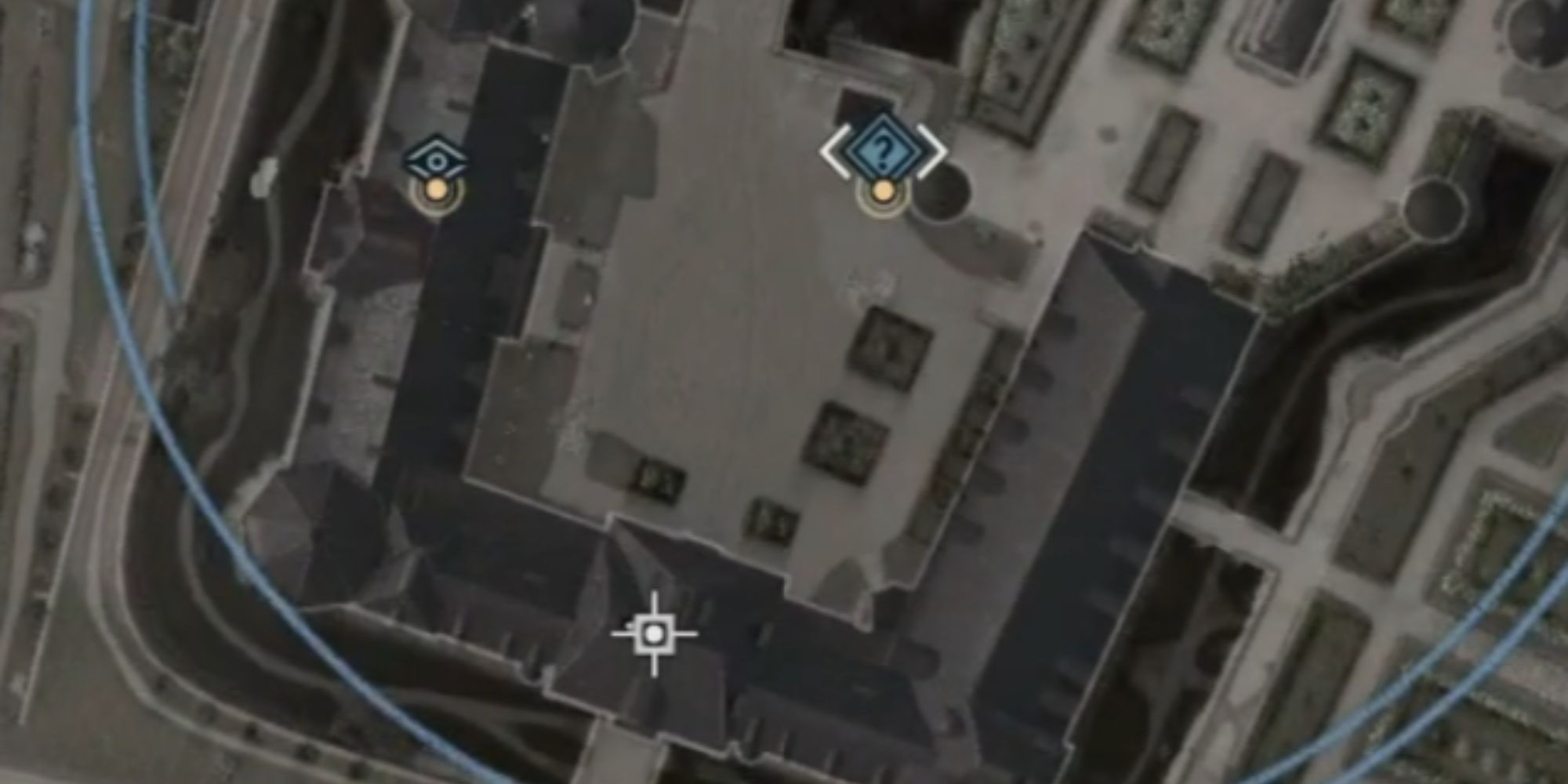 The Group Statuette is inside the room on the map above, which is south of the Old Man Statuette. The room is above the bedroom's level, next to a staircase and a hallway leading outdoors. 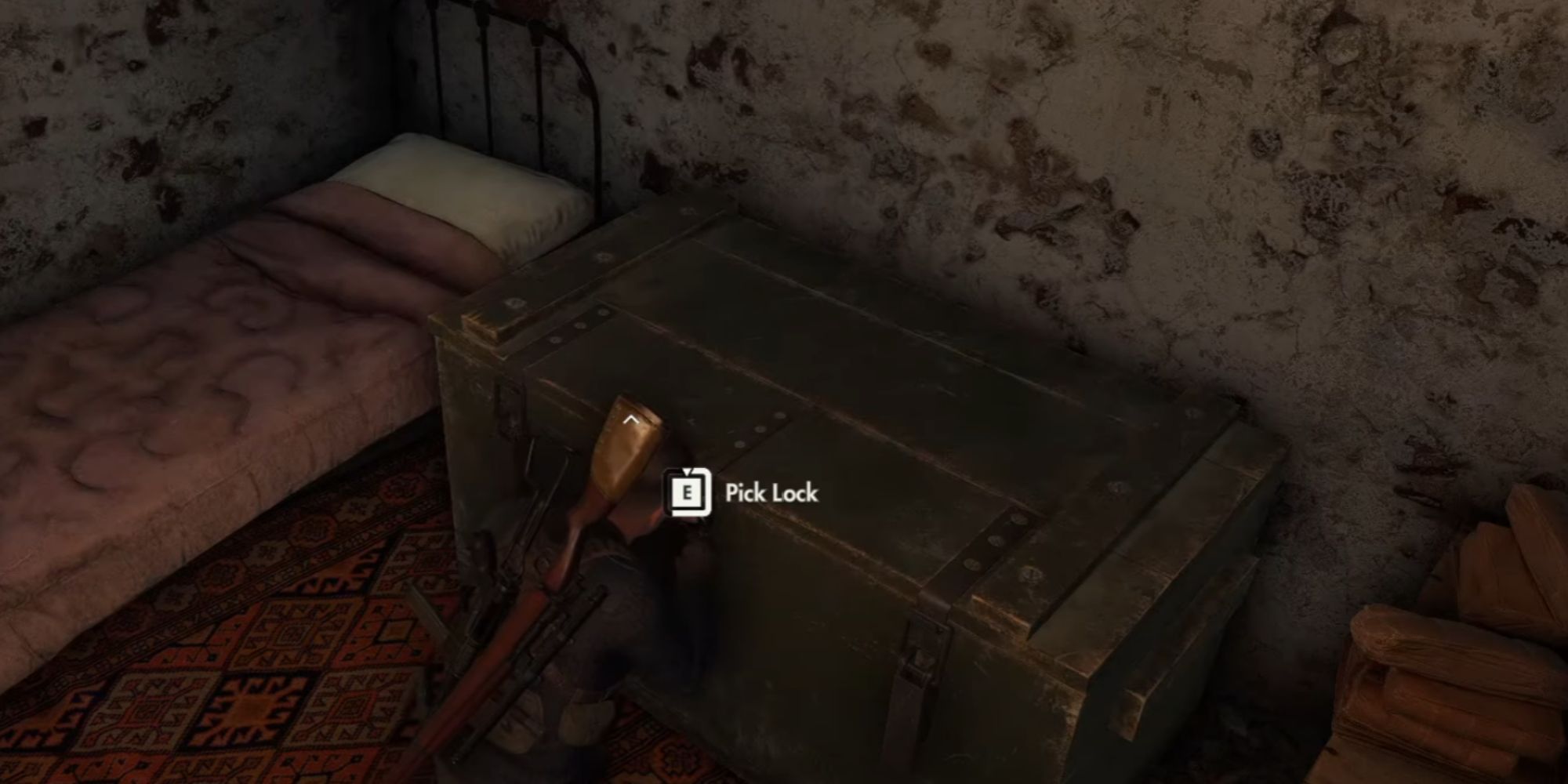 You can acquire it after opening a box in the room, either using Bolt Cutters or lockpicking it if necessary. You can also pick up the Brother, I Have A Plan document in this tiny room. 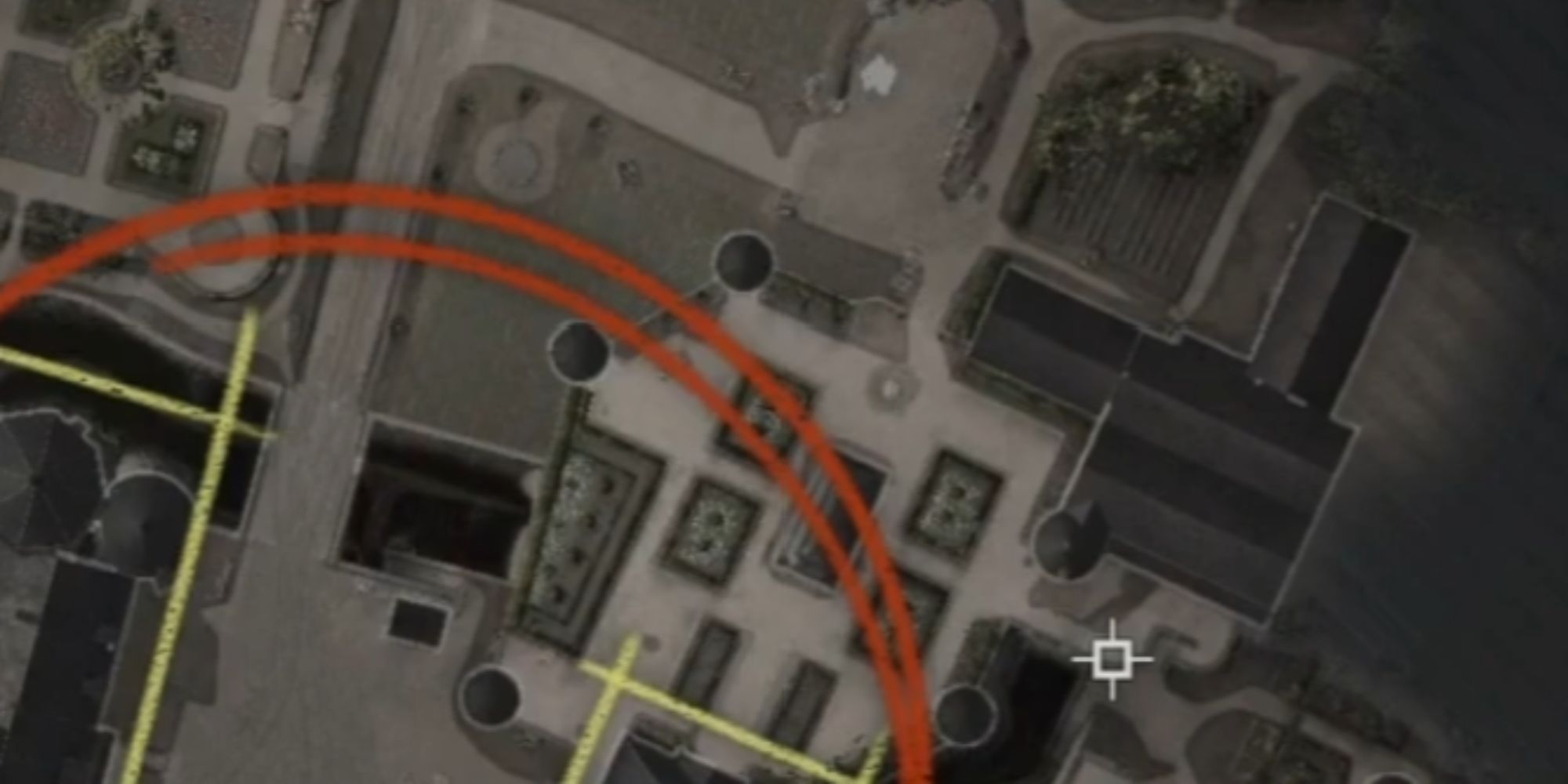 After you have the Group Statuette and Old Man Statuette, you can obtain the Soldier Statuette by defeating the sniper in the tower northeast of the chateau and then searching him. You'll find the sniper's tower on the map above. 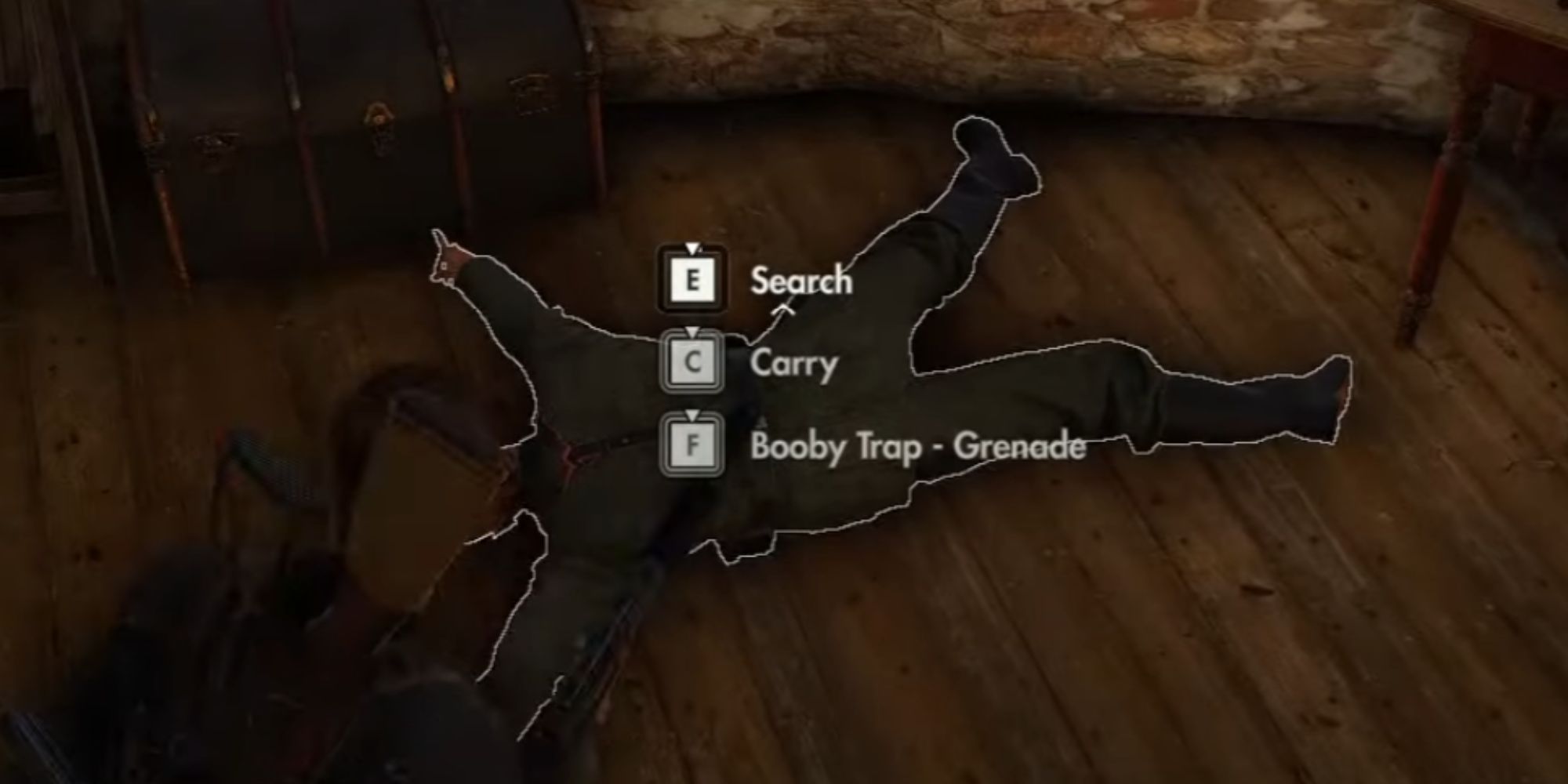 Like everywhere else outside the chateau, there may be soldiers walking around outside this building, but you can use distractions like whistling or bottles to lure them away from the window without fighting them. 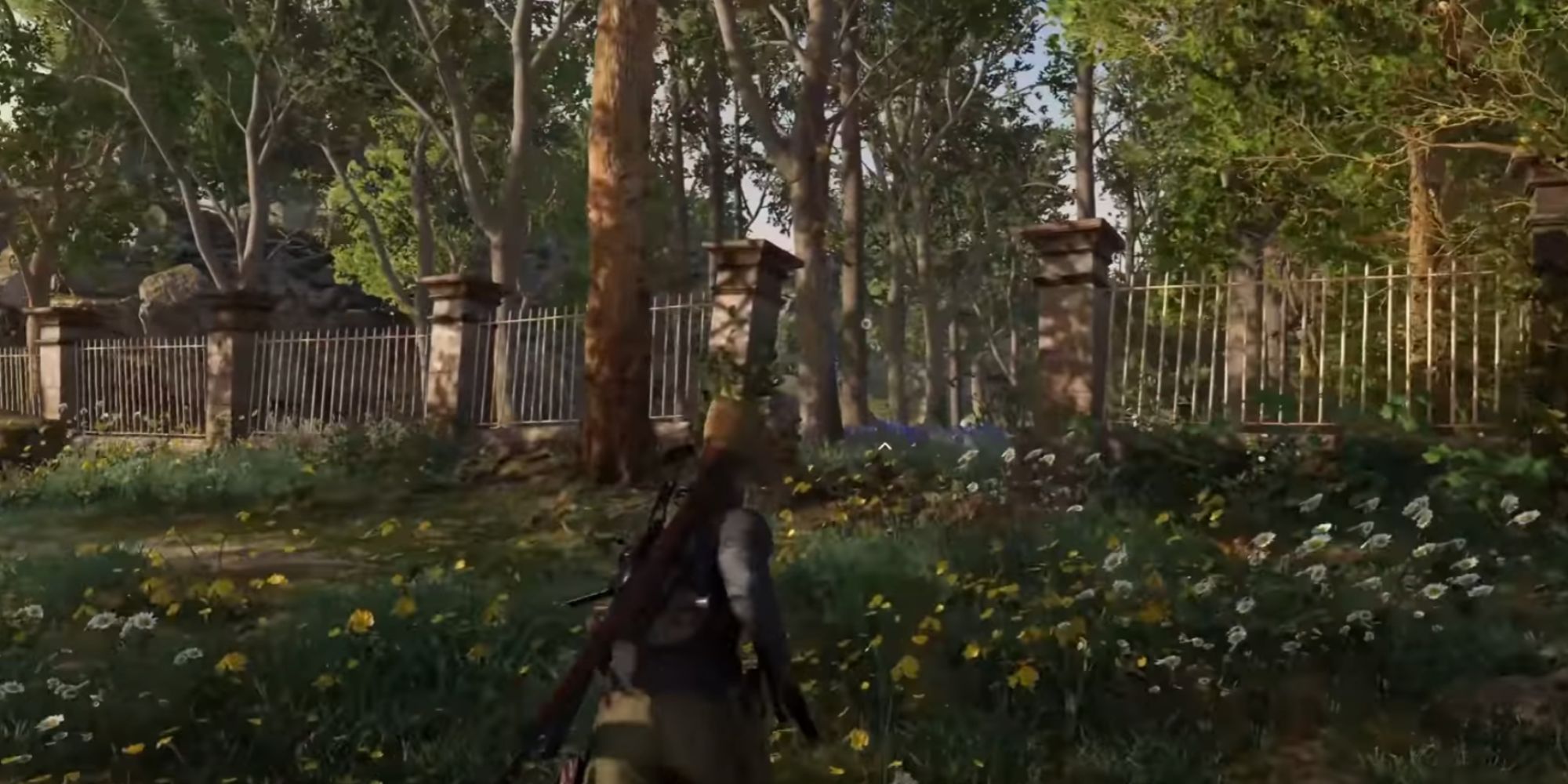 Once you finish each objective, it's time to exfiltrate from the area. You can leave the chateau from any side by exiting through a door or window. However, it's easiest to exit on the eastern side of the building since that's where you'll find the exfiltration point. If you're coming from collecting the Soldier Statuette, then you should already be outside.

The exfiltration point is in the north-eastern section of the map, in-between two fences near the chateau. After you finish in the chateau, a quest marker will pop up on the screen that'll lead you straight to the correct location. There's also a picture above that you can use as a reference while making your escape.