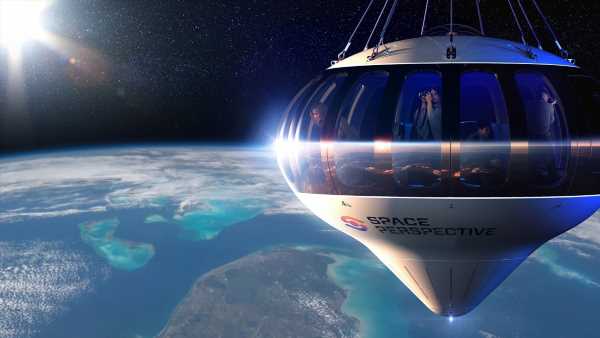 Space Perspective has raised $40 million so it can give space tourists a gentle ride to the edge of space by attaching vehicles to giant space balloons. The company has already sold out its initial reservations for $125,000 for a six-hour flight.

Billed as the world’s first luxury spaceflight experience, Cape Canaveral-based Space Perspective argues that you can enjoy the thrill of space exploration without having to endure a multi-g-force ride on a rocket. Instead, a balloon the size of a football stadium will take you up gently to the edge of the atmosphere, 20 miles above the Earth. There, you can snap pictures that show the view of Earth from space, including the curvature of the planet.

VC firm Prime Movers Lab led the round with additional participation from existing and new investors. The new injection of capital marks the first time a human space balloon company has raised this level of investment.

The private company’s Neptune One will become the first space launch operator to launch from Space Coast Spaceport (adjacent to NASA’s Kennedy Space Center in Florida), starting as early as 2024. The company did a successful test flight on June 18.

Space explorers and travel adventurers looking to upgrade their bucket list will savor 360-degree views of planet Earth from 20 miles above in a luxurious six-hour trip inside Spaceship Neptune, propelled by a state-of-the-art space balloon the size of a football stadium, said Jane Poynter, cofounder of Space Perspective, in an earlier interview with VentureBeat.

“We are exhilarated by this significant investment by Prime Movers Lab and also deeply appreciative of new support from LightShed Ventures, the Explorer 1 Fund, and others,” said Poynter, in a statement today. “It’s a new day in space travel, and our investors are responding to a vocal and growing market of travelers seeking a safe portal for this ultimate journey.” 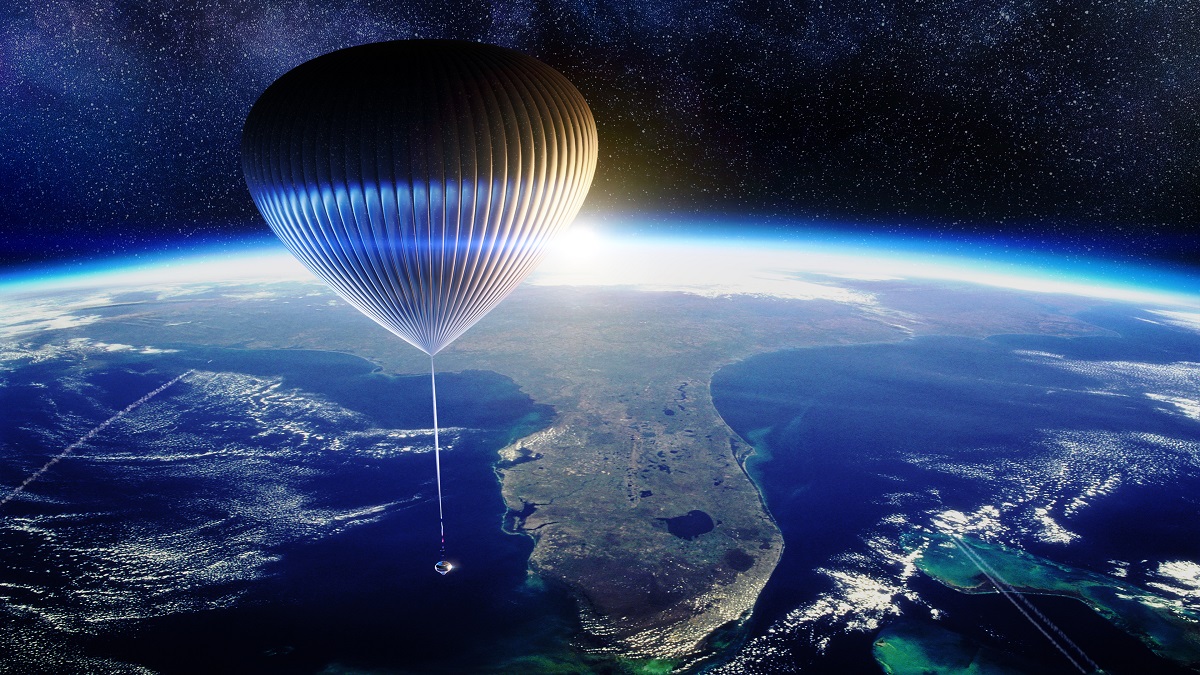 Above: Space Perspective will give you a gentle ride to the edge of space.

Space Perspective is the brainchild of Poynter and Taber MacCallum, a husband-and-wife team who met as crew members of Biosphere 2, an artificial, enclosed ecosystem designed to mirror Earth’s biosphere to test the viability of maintaining human life in outer space.  The couple also founded Paragon Space Development Corporation, a human life support systems company that created technologies used on most human spacecraft, including the International Space Station, and they acted as technical advisors to Elon Musk on human spaceflight before SpaceX was a reality.

“This is an important milestone for Space Perspective, and we are thrilled to have secured this mission-critical support from Prime Movers Lab,” MacCallum said, in a statement. “Our successful, first test-flight in June, which lifted to the target altitude of 108,000 feet, signaled that all systems are ‘Go!’ for our sustainable approach to space tourism. Our brilliant engineers and safety experts have devised a fail-safe SpaceBalloon vehicle and propulsion system executed to the same exacting safety and performance standards befitting a NASA mission.”

Poynter and MacCallum also led the StratEx (Stratospheric Exploration) mission at Paragon that invented a self-contained spacesuit and recovery program to allow human exploration of the stratosphere at 100,000 feet. That mission saw Alan Eustace, a senior Google engineer, set the world record in 2014 for human spaceflight propelled by a space balloon at 136,000 feet — a record that remains unchallenged today.

Most recently, the couple was behind the Silicon Valley-backed stratosphere balloon technology company World View Enterprises, which built the un-crewed, remote-controlled Stratollite balloon for communications and remote sensing.

The draw of more accessible space travel is big business. According to reports Space Perspective commissioned from leading international management consultancy firms, the total addressable market is worth $250 billion to $700 billion. 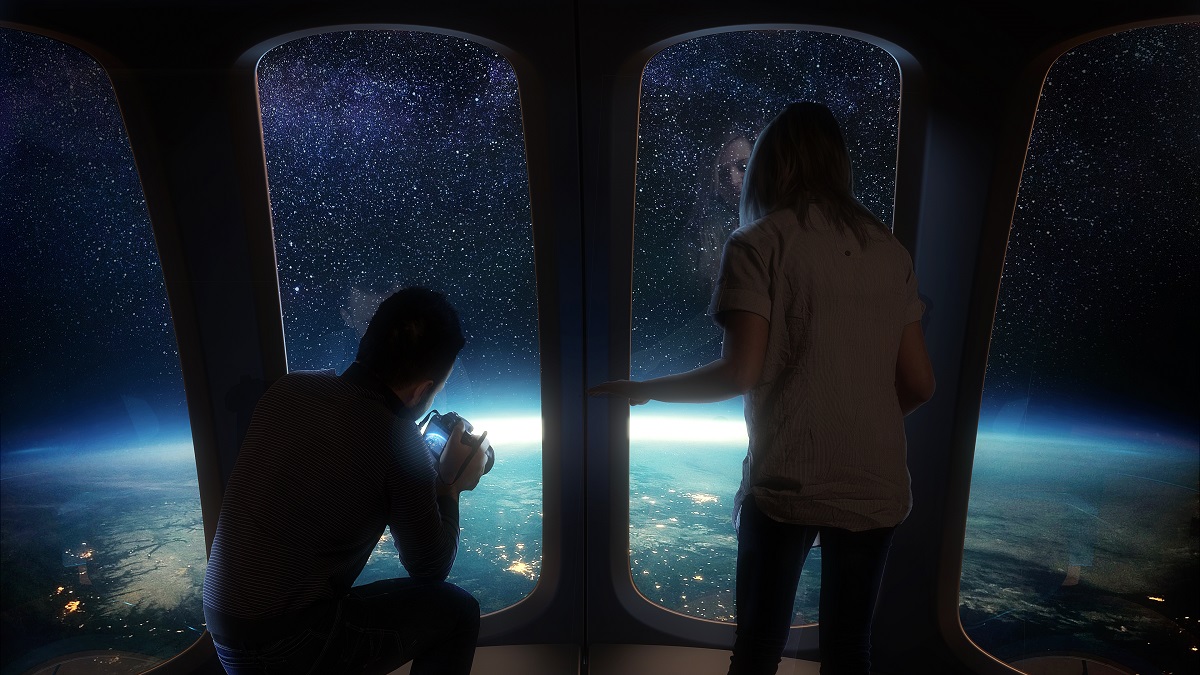 Above: Spaceship Neptune lets you take pictures of the Earth from near space for two hours.

The “space curious” who would consider rocket-fueled space endeavors too risky or expensive now have the opportunity to experience the exhilaration of traveling to space with a safe and gentle ascent. A rocket ride — including the Jeff Bezos-funded Blue Origins rocket that just took William Shatner, a.k.a. Captain Kirk, into space — can be physically grueling and cost a lot per guest.

The pressurized Spaceship Neptune will lift passengers 100,000 feet to space to then be immersed, for two hours, in breathtaking views of the curvature of Earth down below. The ship doesn’t go into space itself, but it will clear 99% of the Earth’s atmosphere. Since the balloon floats in the last 1% of the atmosphere, the air inside the balloon expands 100-fold.

Space Perspective will send one pilot up in the spaceship with eight tourists, with a remote co-pilot on the ground. Poynter said if the balloon fails, then the capsule has a big parachute. Upon returning to the Earth, the capsule will land in the ocean at a predetermined point, and the near-astronauts will be picked up by a boat.

Space Perspective raised $7 million last year, and it has under 50 employees. The company is still planning on flights to the edge of space by late 2024.