Hey, remember Saint-Cloud, everyone? From the beginning of Steelrising? Well, it's back! And with a vengeance, too. This is a completely optional section of the game. You are free to complete it the moment you have obtained all the traversal tools. It is a pretty compact area, but that doesn't mean it doesn't have some good stuff for you to grab.

In fact, completing this section will give you one of the best weapons in the game. Not too shabby! Moreover, while the area may be small, that doesn't mean you won't be tangling with a brand-new Unstable Automat. We'll take you through Ile Monsieur, show you where all the treasures are, and tell you how to put an end to that Unstable Automat. 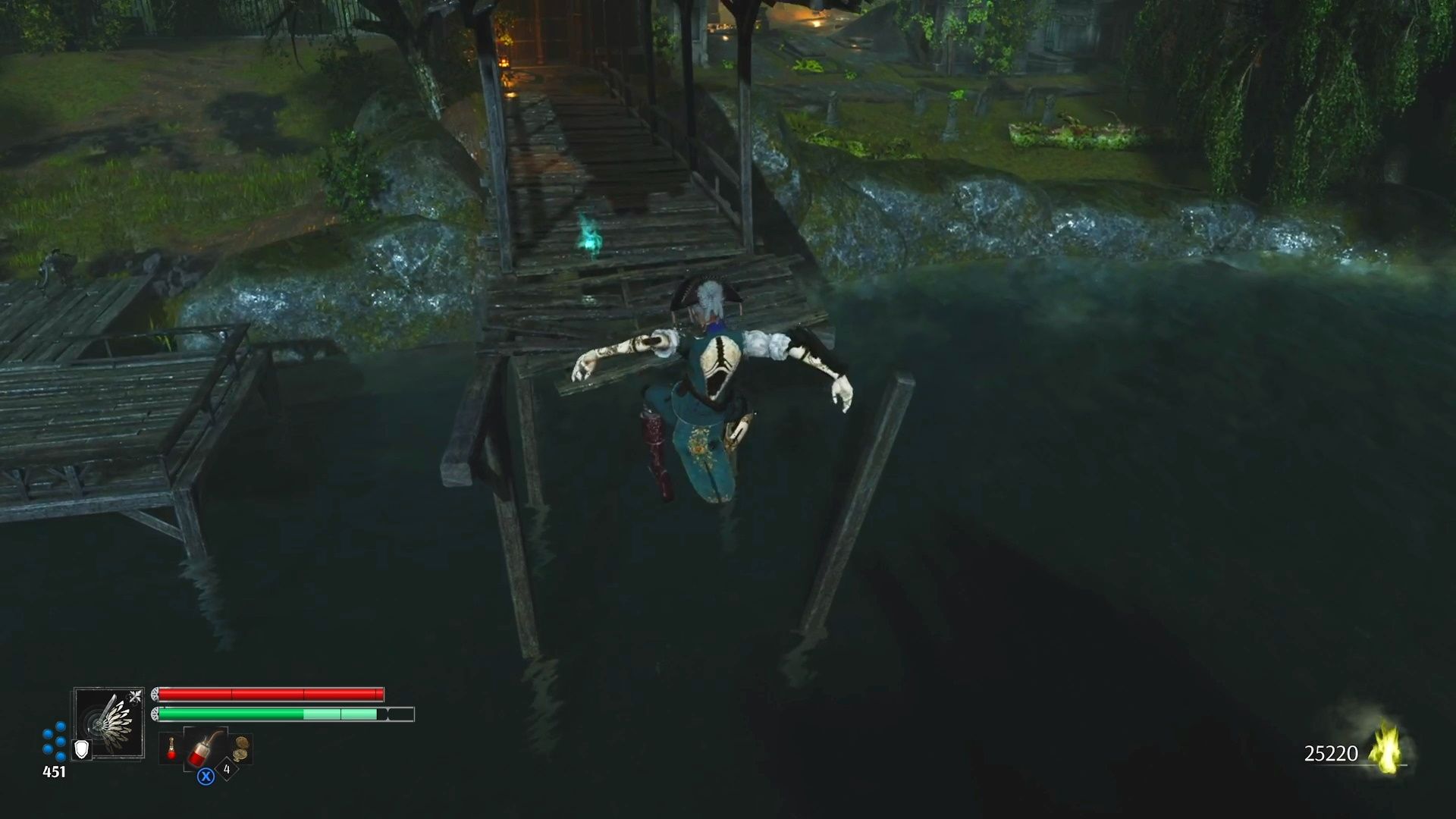 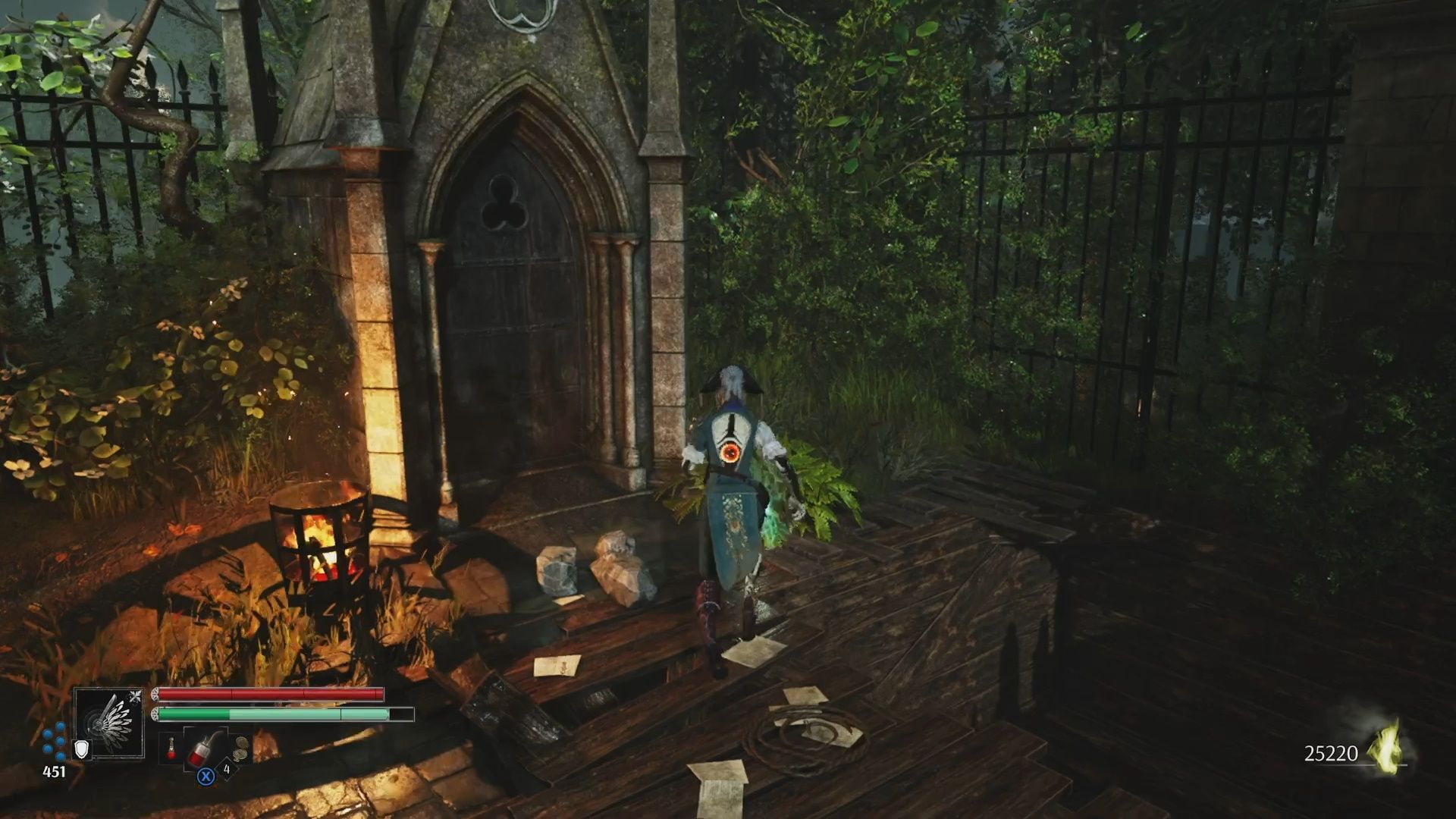 The moment you reach the other side of the bridge, you can pick up the Essence of a Warrior's Spirit. To your left, there will be a Shielded Lancer and a Panther Automat. Nearby them is an endurance vial. Now, find the graveyard and jump into the open hole. You will now enter into the Gondi Chapel Crypt. 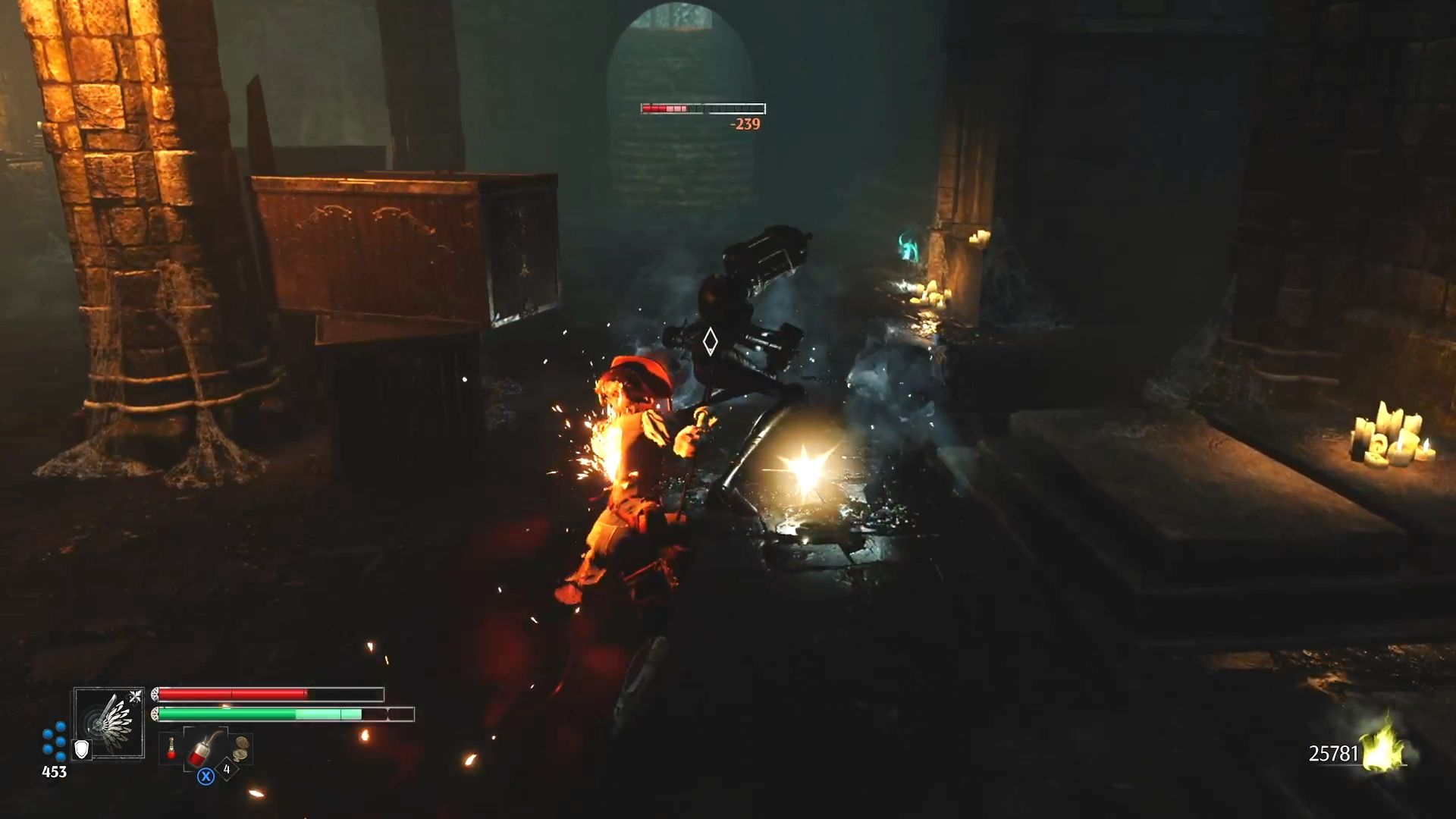 Down here, you will fight a Ball-And-Chain Automat and a standard Automat. Clear them out and then grapple hook your way up the opposite side of where you entered. You'll be back in the Ile Monsieur area. That was fast! 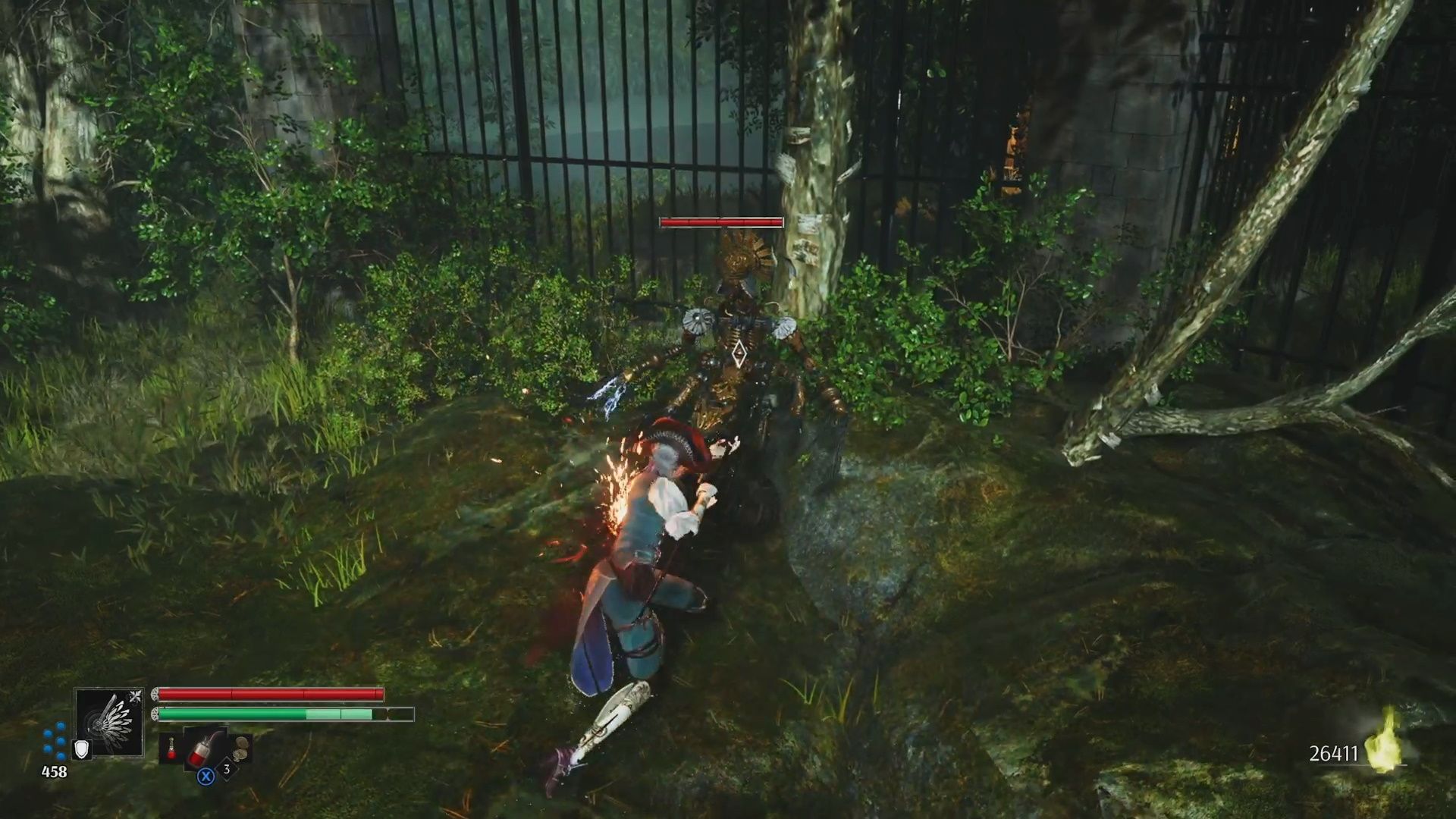 There will be a Fencer Automat standing on the cliff to your left, but be careful, it is just bait! There is a sneaky Snake-Bodied Automat hiding in the bushes, just waiting to ambush you. Once you kill the two of 'em, grab the petrification grenades and oil vials lying around in this area. There is a house nearby with a treasure chest beside it. Open the chest and grab the Romas Partisan (which may just be the best Halberd in the game). Turn the corner, and you will face off against the Unstable Lumberer. 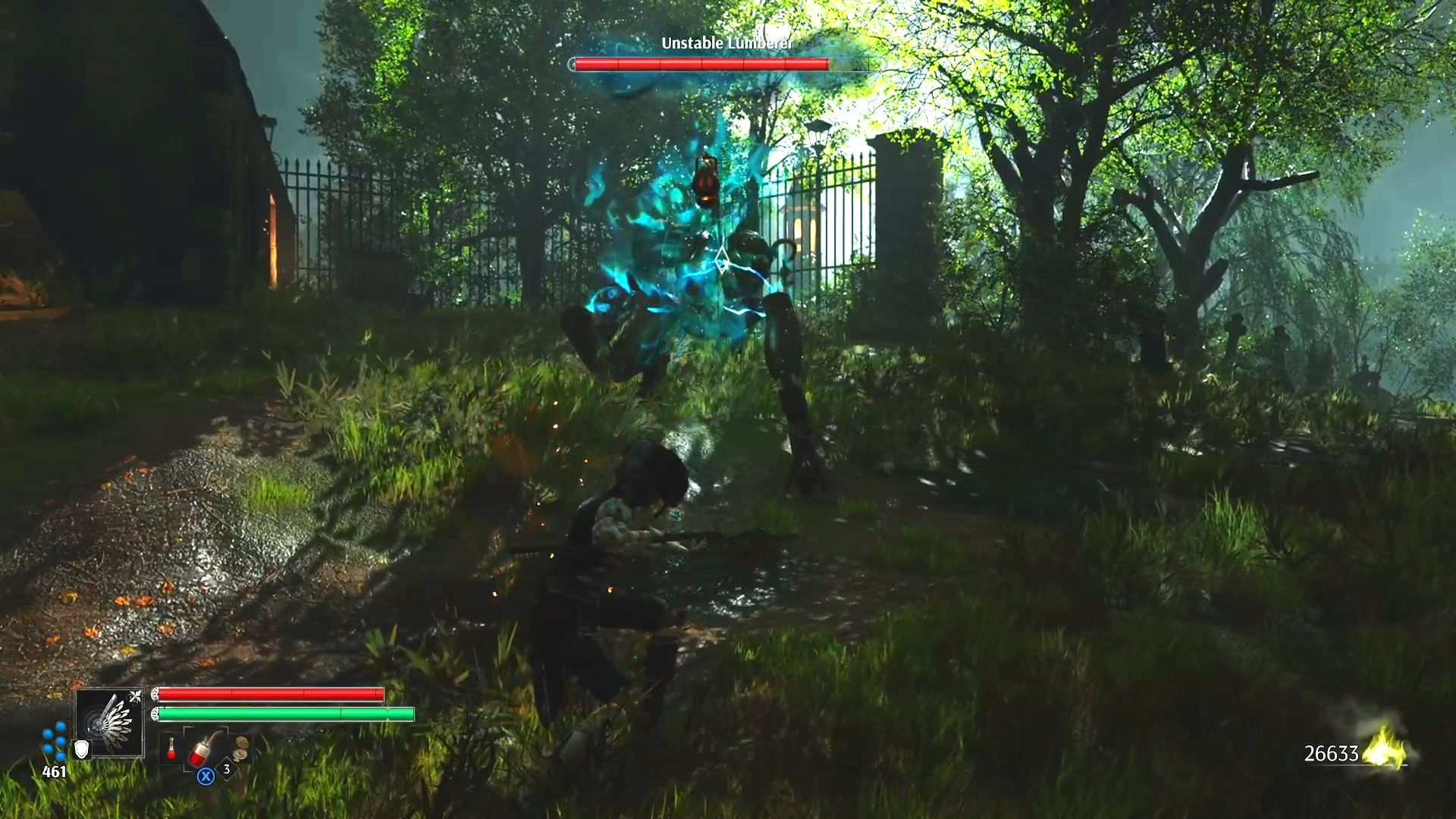 If you haven't made your way to the Montmartre area of Steelrising yet, then you will not have encountered this Automat at this point. The Unstable Lumberer is a variant of the Forger Automat. This means that they have that same move where they convert their head into a swiveling bludgeon that will hit multiple times if you get caught by it. Thankfully, you can just sidestep this attack and dodge away from it.

While the Unstable Lumberer doesn't have a spear like their Forger cousin, they do still use their log to perform a very similar lunging stab attack. They also have a few swiping horizontal attacks. None of these are particularly new or interesting. Side dash through and around both moves, then attack the Unstable Lumberer's back. 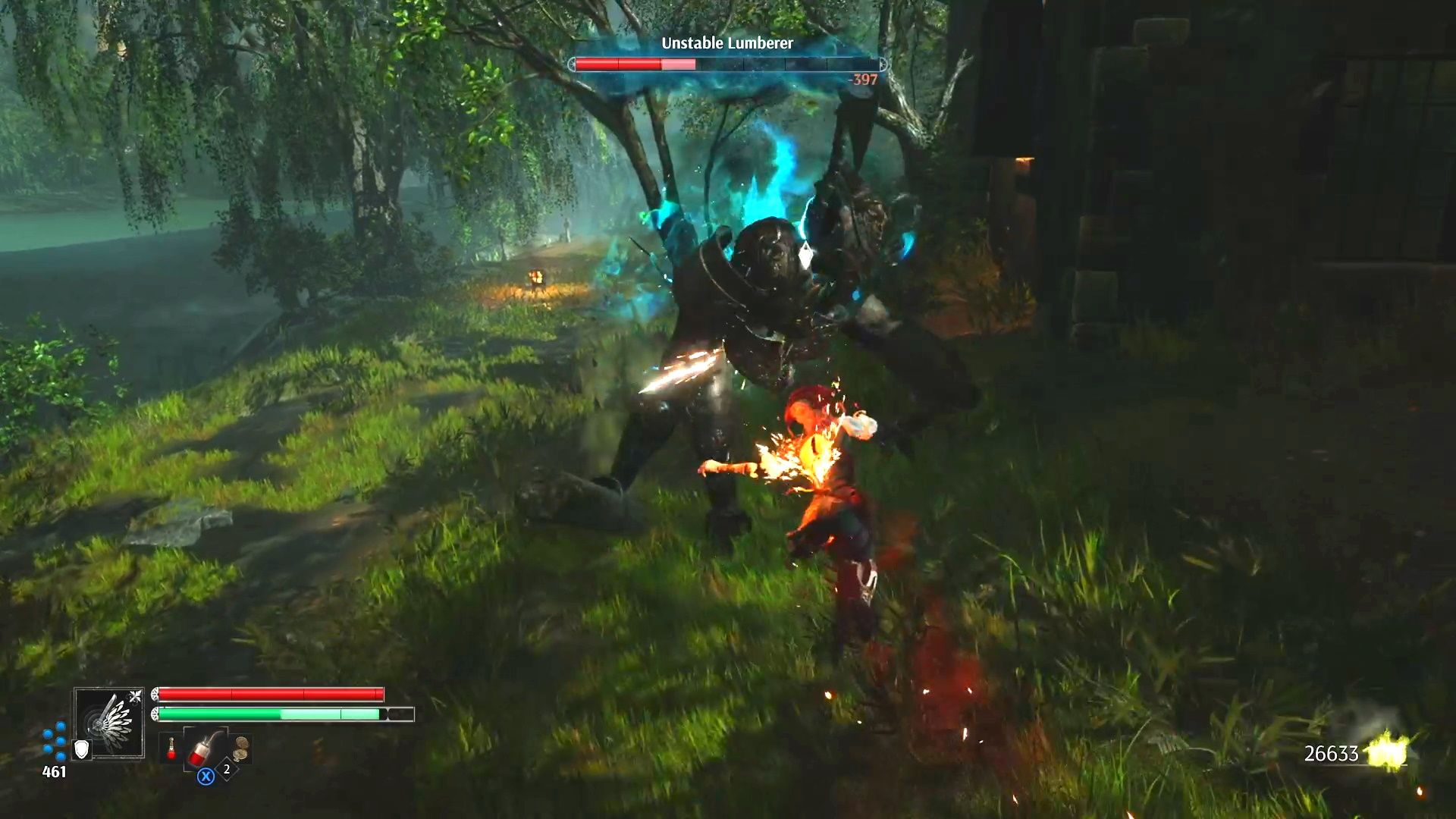 What is new, however, is their charging attack. This attack sees them charge forward and slam their log down length-wise. They charge forward in a straight line, so just make sure you dash to the side. The charge itself also has a hit box, so don't try dashing through them, as doing so could lead to you getting eaten up by the charging part of this attack. Dashing away would, obviously, be a terrible mistake.

The Charging attack actually has a ton of armor! This is one of the few times in the game where an enemy was able to push through our fully-charged Halberd attack, so the Unstable Lumberer must have an excellent balance stat. 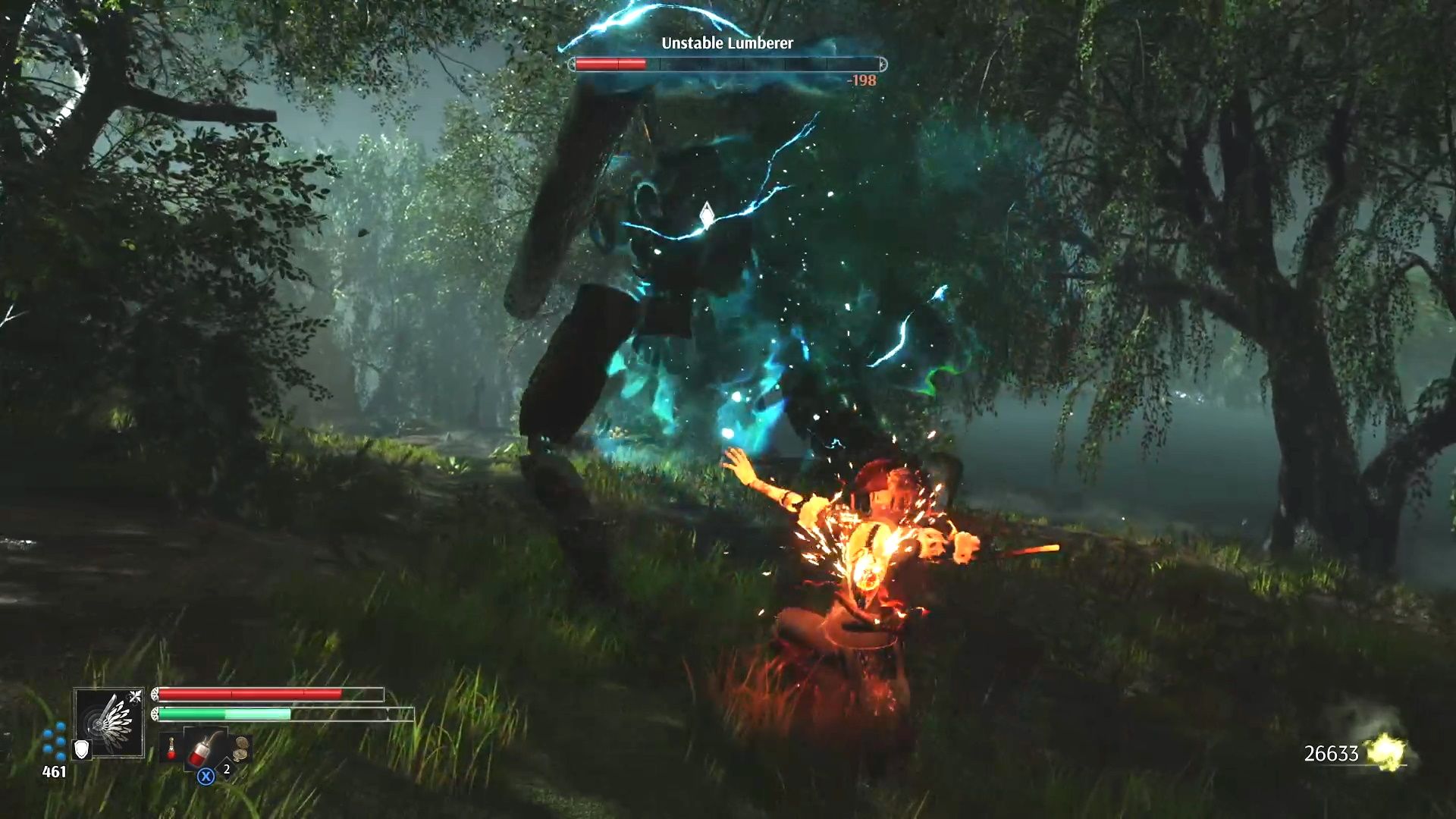 Another thing worth noting is that they do have a horizontal spin attack that they will use if you are attacking their back, which will hit all the way behind them. So, if you are attacking their back, and you see them raise their log above their left shoulder, they are about to swing around and whack you. So back off when you see them doing this.

Beyond the charging attack, and the spinning attack, you are going to fight the Unstable Lumberer the same way you have been fighting Forgers for multiple stages now. Dodge through their bigger swings, and attack their back. Just keep an eye out for those two new attacks. Once you beat the Unstable Lumberer, loot their body to obtain the Bismuth Block, and Module Key. 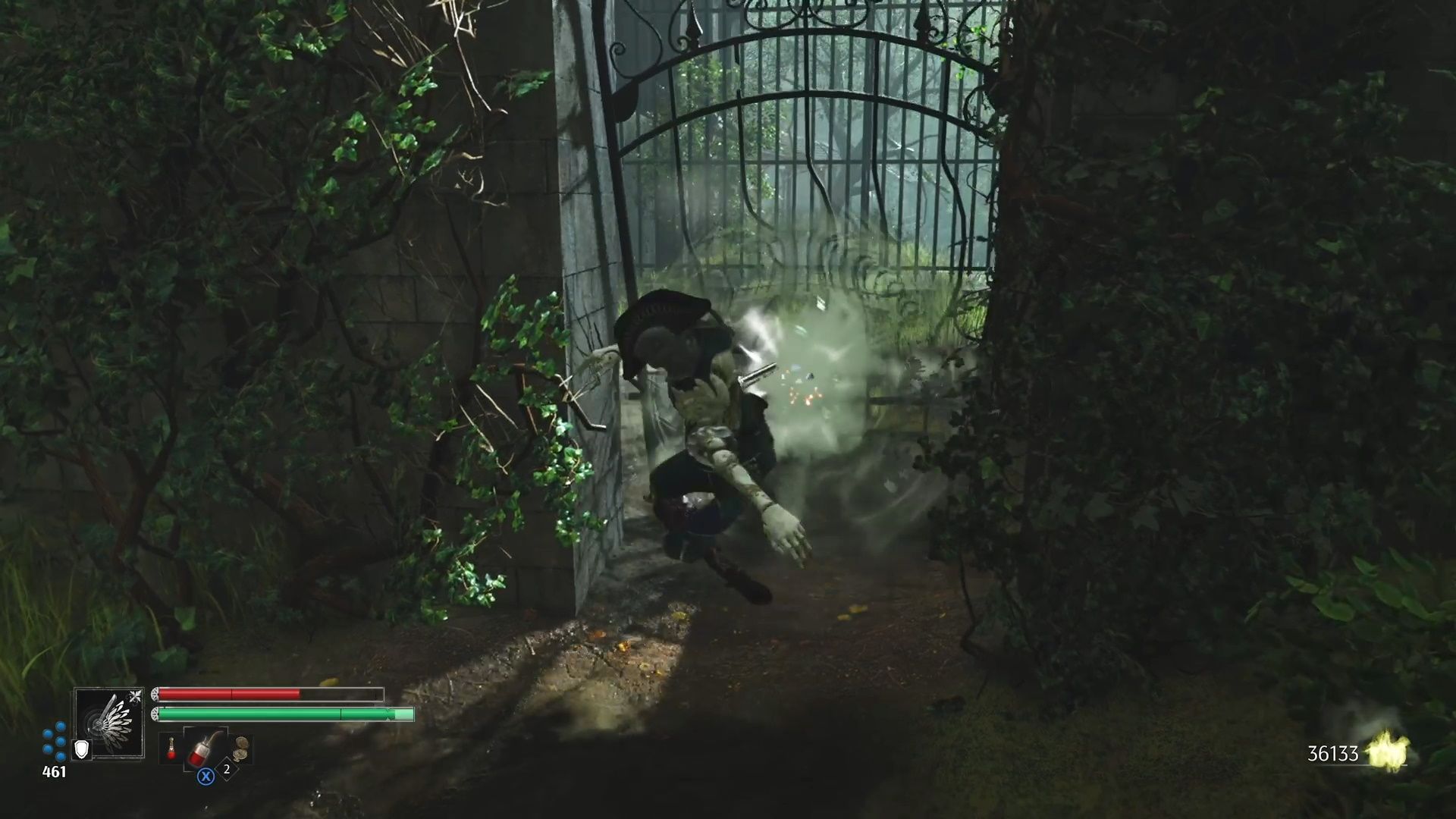 After you beat the Unstable Lumberer, kick down the gate they were guarding and grab the key off of the corpse. Now, head toward the shore; there will be an Essence of a Warrior's Spirit in front of a grave. Head to the right on the path, and you will fight a standard Automat and a Club-Wielding Automat. Once you clear them out, go grab the Bronze Ingots that are sitting near the shore. 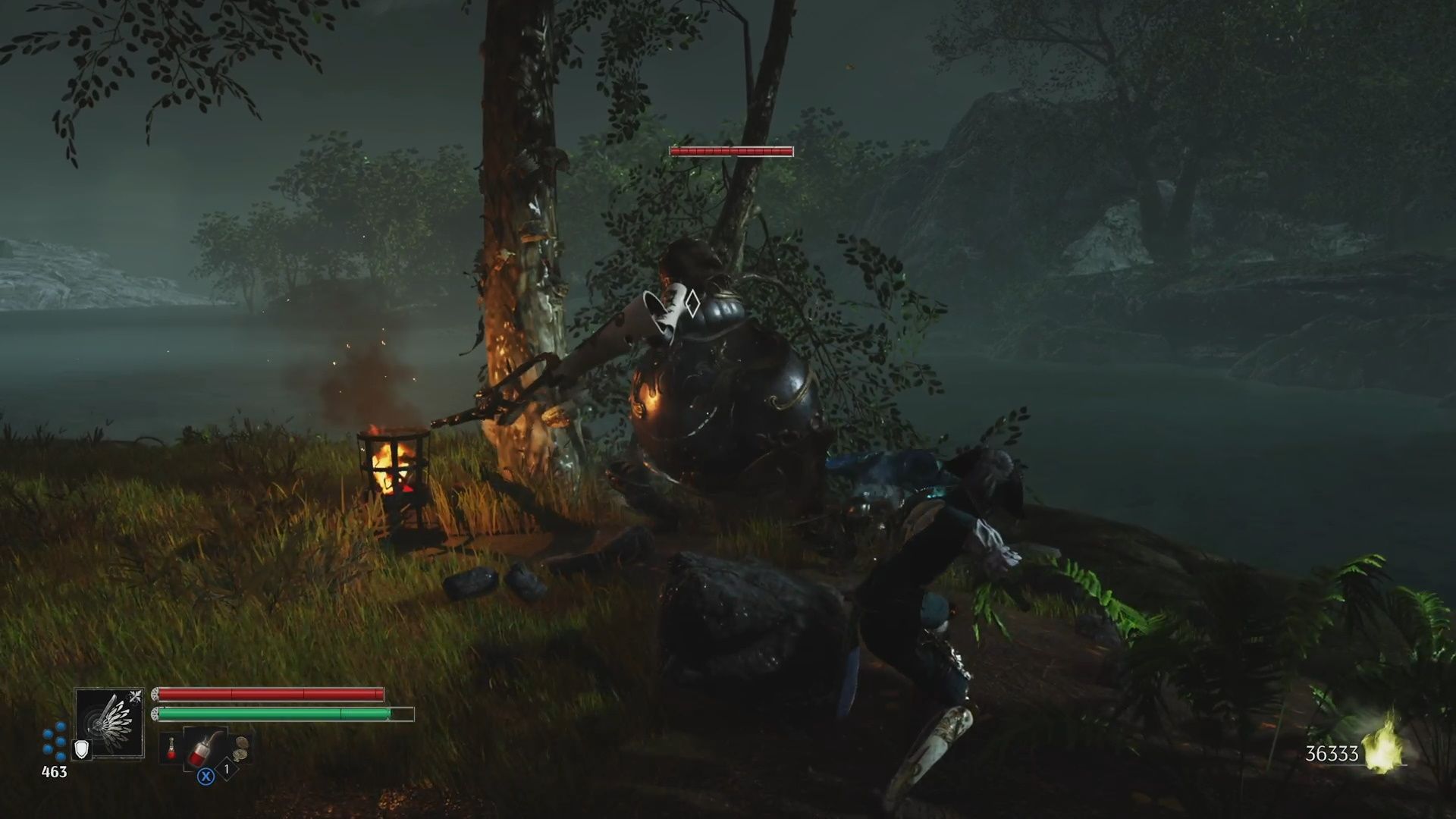 You can now open up the gate which will lead back to the bridge. Air Dash across the bridge and open the gate next to your carriage. You can now enter the port area and fight a bigger, badder version of the Shielded Lancer type of Automat, as well as two Axe-Wielding Automats, which are the toughest variant of the standard Automat. 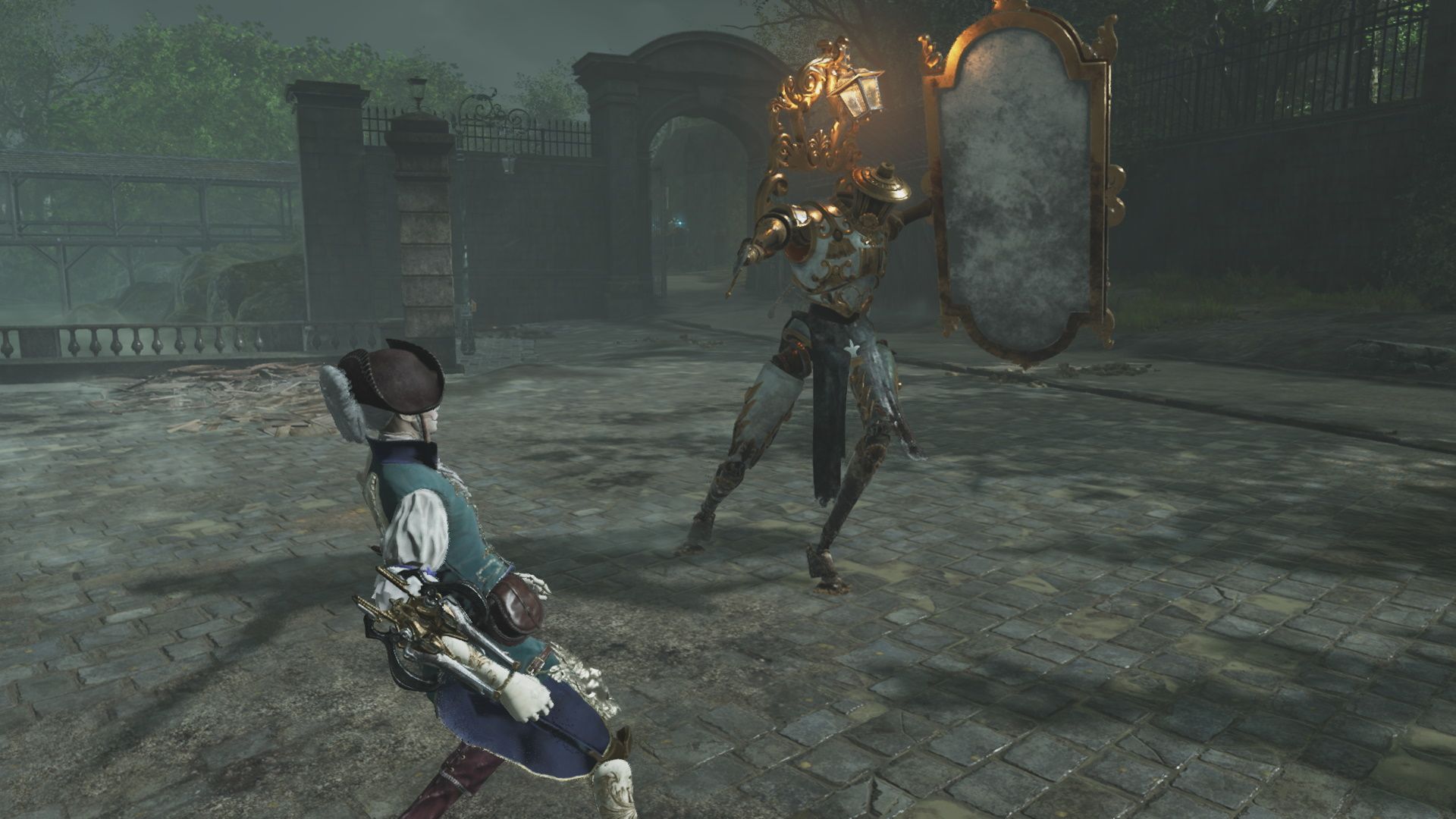 However, there aren't really any rewards to reap here. If you interact with glistening spot near the dock, and take the boat to Paris, you are just going straight back to the Gros Caillou. And if you kick down the gate, you are just back to the Saint-Cloud Forest section (and no, there is nothing new to do here).

The next area, which is opposite the gate you just opened up, will be locked off from you until you complete every single side quest in the game and complete The Bastille area. Then, and only then, will you be able to enter into The Grandes Nappes section of Saint-Cloud.