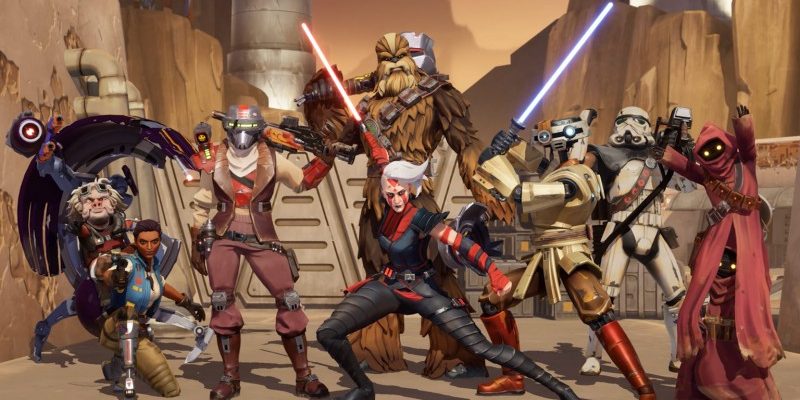 Just when I thought I’d seen everything Star Wars had to offer, Zynga introduces one of the strangest ideas yet: a Jawa standing on his brother’s shoulders to create a tall fighter named Utooni. This puzzling creation is just one of the many combatants in Zynga’s Star Wars: Hunters, a Switch and mobile game that is slated to release next year.

Star Wars: Hunters is a free-to-play multiplayer game that takes some real chances with its roster. You won’t see recognizable characters like Luke Skywalker, Darth Vader, or Boba Fett battling to the death. Zynga is instead making its own lineup of warriors from the Outer Rim. Another odd one is named Slingshot, which just happens to be a droideka piloted by an Ugnaught. There’s also a droid named J-3DI, which thinks it controls the force and wields a lightsaber.

A couple of the characters fall in line with what you would expect from the Star Wars universe. Sentinel would appear to be a fairly ordinary stormtrooper who just happens to love heavy weapons. There’s also a Sith Lord named Rieve, who is decked out in black and red garments.

All of the characters have their unique abilities, attributes, and fall into one of three classes: Damage, Support, or Tank. They are putting their lives on the line in the pursuit of fame and fortune, and are battling in the organized “Hunters of the Outer Rim” competition. The player is also competing for valued prizes, like cosmetics, animations, and weapon appearances for each of the characters.

At least two PvP modes will be available at launch. The first is Escort, a team-based exercise that pushes players to work together to move a payload from one location to another. The second is a classically-designed game of Control, with two teams battling to seize a central objective area. Even though the battles unfold in a place called the Grand Arena, they are themed after iconic Star Wars locales like Tatooine, Endor, and Hoth.

No official release date has been given for Star Wars: Hunters as of this writing, but it shouldn’t be too far off, as Zynga is currently testing the game through a soft launch in India, Malaysia, Indonesia, and the Philippines.