This melee weapon is a must-have for beginner and expert hunters. Damage can range up to the 800s in Attack Power, and that’s just Attack Power. Even the mediocre of charge blades can have natural White Sharpness in its stats. To learn how hunter’s can get the most out of their arsenal, here are the top ten charge blades in Monster Hunter: World, Ranked. 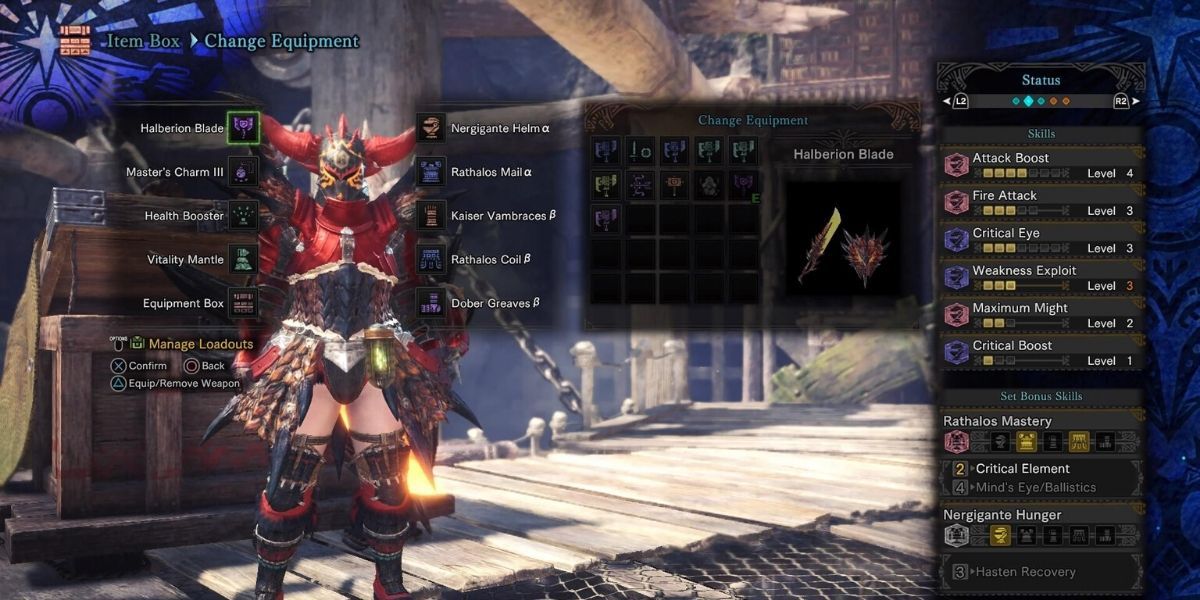 The first charge blade on this list is the Halberion Blade. The description for Halberion Blade claims this blade is made “host to Rathalos’s Fury, said to be able to rend earth and sky apart.” It has a 684 Attack Power, Blue Sharpness, 20% Affinity, 240 Fire Elemental Damage, and Power Element Phial. The Power Element Phial greatly adds to this blade by emitting fire damage during amped elemental discharges. Combine this with the 240 Fire Elemental Damage, good Affinity, and good Attack Power, this blade comes in handy rather greatly. 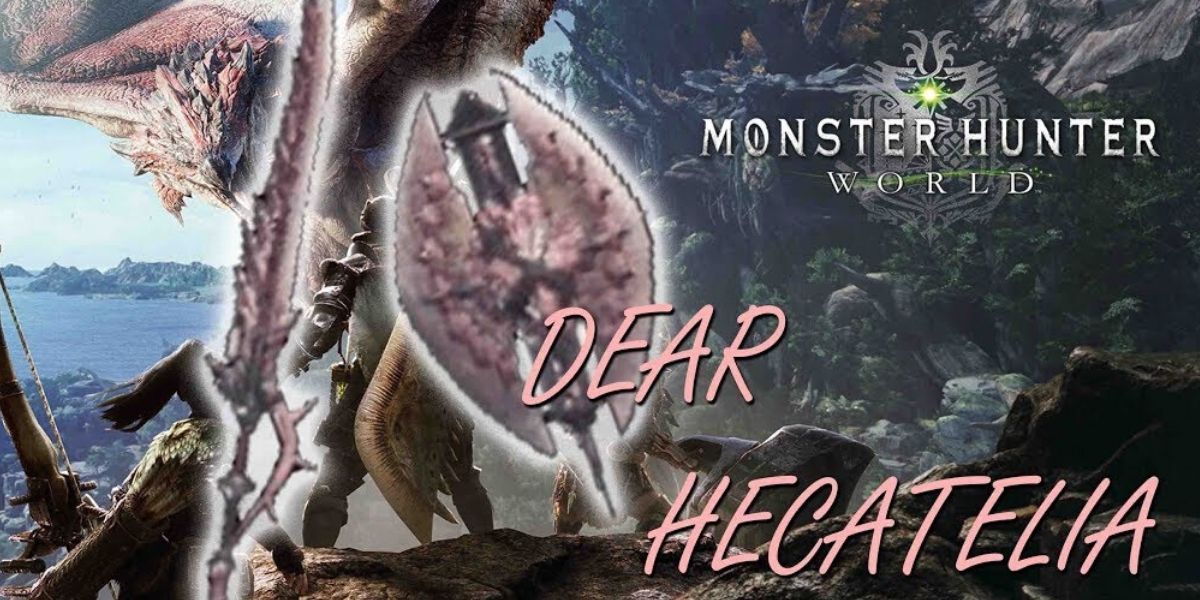 Slow and steady wins the race is what would be used to describe the Dear Hecatelia charge blade. It has 684 Attack Power, Blue Sharpness, 0% Affinity, 330 Poison Elemental Damage, and Impact Phial. Because the Elemental Damage is poison, this blade is good for inflicting damage rather than sustaining damage. While a Sleep or Paralysis Elemental Damage produces more damage on monsters, a Poison Damage is just good enough. The upside to this blade is that it has two slots available for additional skills to boost up this charge blade. 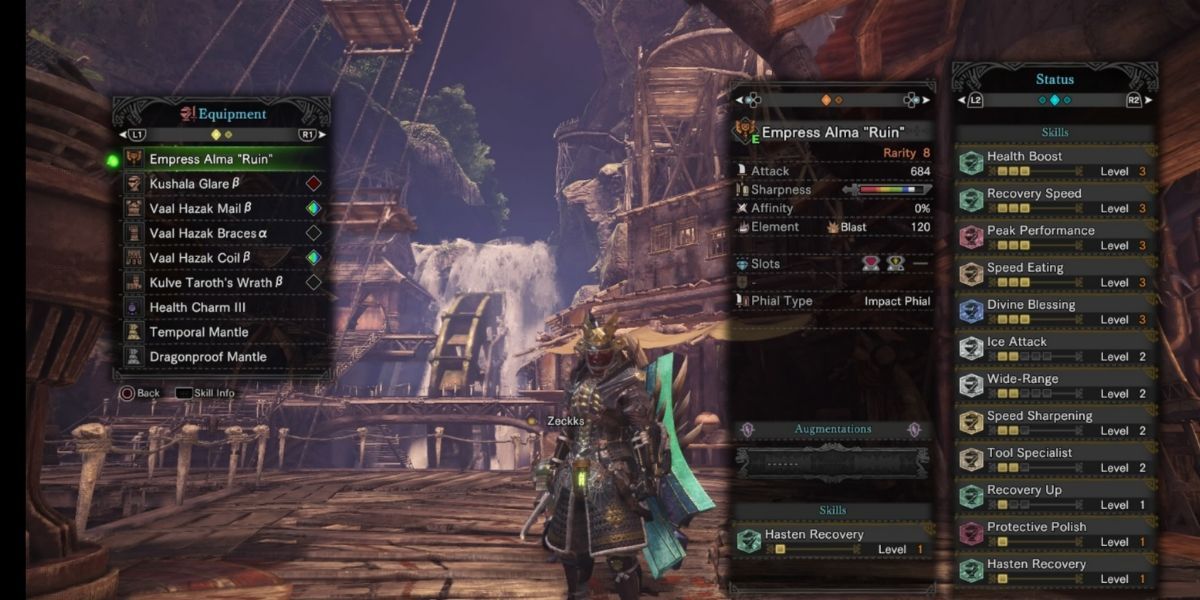 According to Kiranco/MH: World, the Empress Alma “Ruin” is a “Lunastra charge blade that resonates with the added Nergigante parts to give a chance for regeneration.”

Much like the Dear Hecatelia, it has 684 Attack Power and 0% Affinity. The difference between Dear Hecatelia and Empress Alma “Ruin” is that the Empress Alma “Ruin” has a Sharpness goes all the way up to White, has a 120 Blast Elemental Damage, contains an Impact Phial, and even has a skill: Hasten Recovery. Overall this is a fairly good blade with a lot of potential for damage, especially with the Blast Elemental Damage. 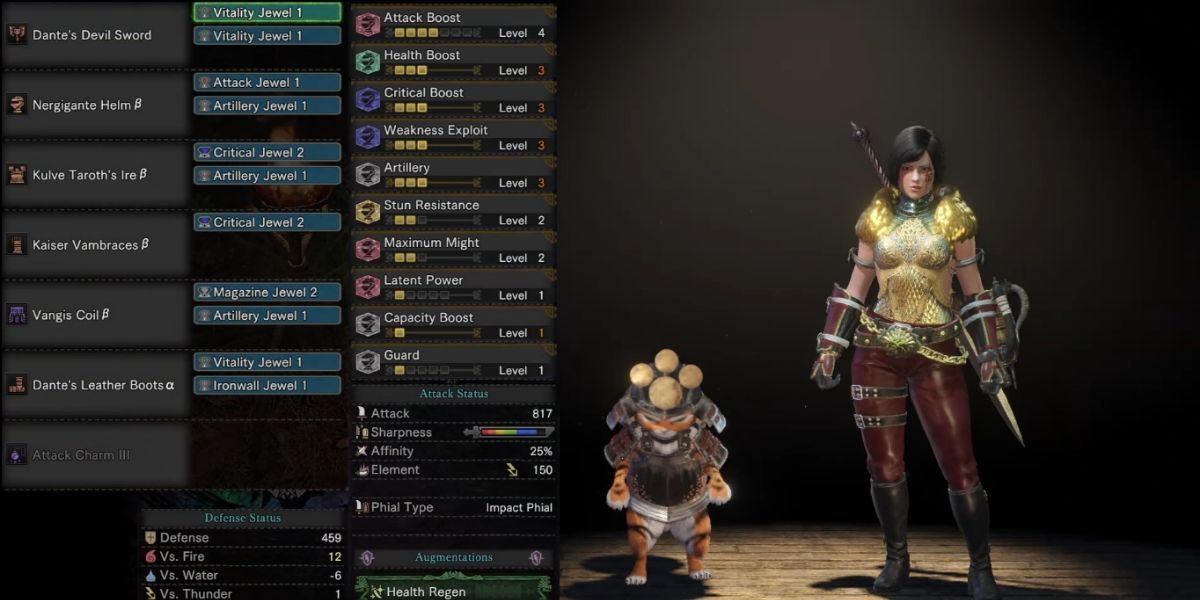 The Dante’s Devil Sword is a collaboration between Monster Hunter: World and Devil May Cry series. It has 720 Attack Power, Blue Sharpness, 0% Affinity, 150 Thunder Elemental Damage, and an Impact Phial. Because of the Impact Phials, hunters will be able to KO monsters if all Phials blasts are accurate, and this allows for stunning monsters.

But what goes up must come down; the downsides to obtaining this blade include not being able to get it out of the box, and it costs two gems for getting this weapon. 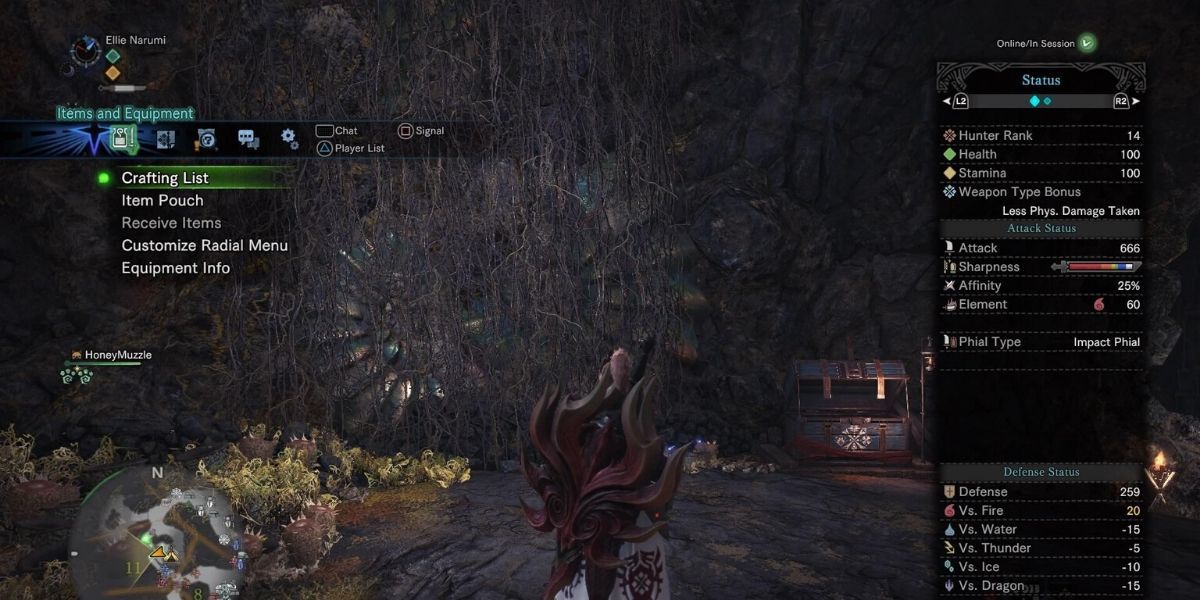 Odium is Latin for “hatred” and this blade perfectly exhibits such a translation. This weapon is absolutely perfect for critting, and looks good while doing it. Odium, while it only has a 576 Attack Power, has an epic range of stats. It has a White Sharpness, 25% Affinity, 180 Fire Damage, and an Impact Phial. The White Sharpness comes naturally with this weapon, and hunters can crit to 100% after utilizing the full set of Odogaron and coping that with the Weakness Exploit skill.

While it relies heavily on Affinity, optimizing this build can get hunters legendary kills. 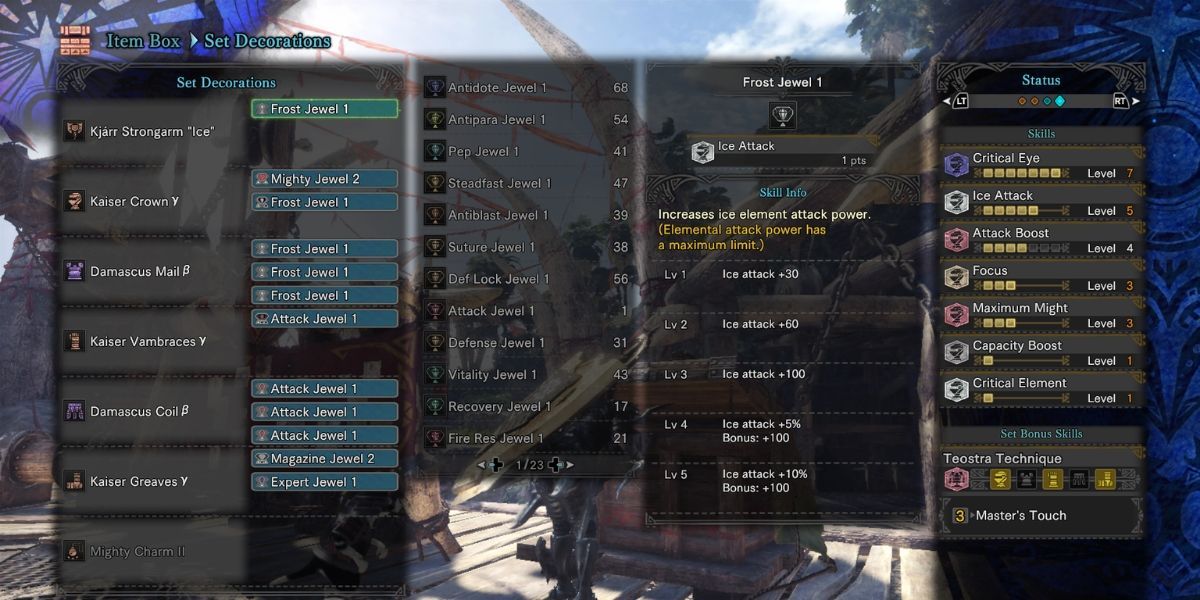 This blade is one of the, if not the, most powerful Ice Charge blades in Monster Hunter: World. The stats that come with this blade are absolutely incredible: 684 Attack Power, 20% Affinity, 480 Ice Elemental Damage, a Power Element Phial, a skill of Critical Element and has one slot available. This blade is best used against monsters Lunastra or Teostra.

While it may not have the intense base damage as Diablos Tyrannis II or Taroth Strongarm “Horn,” it’s statistics on Elemental Damage, Element Phial, Critical Element, and Affinity certainly guarantee a place in the top five. 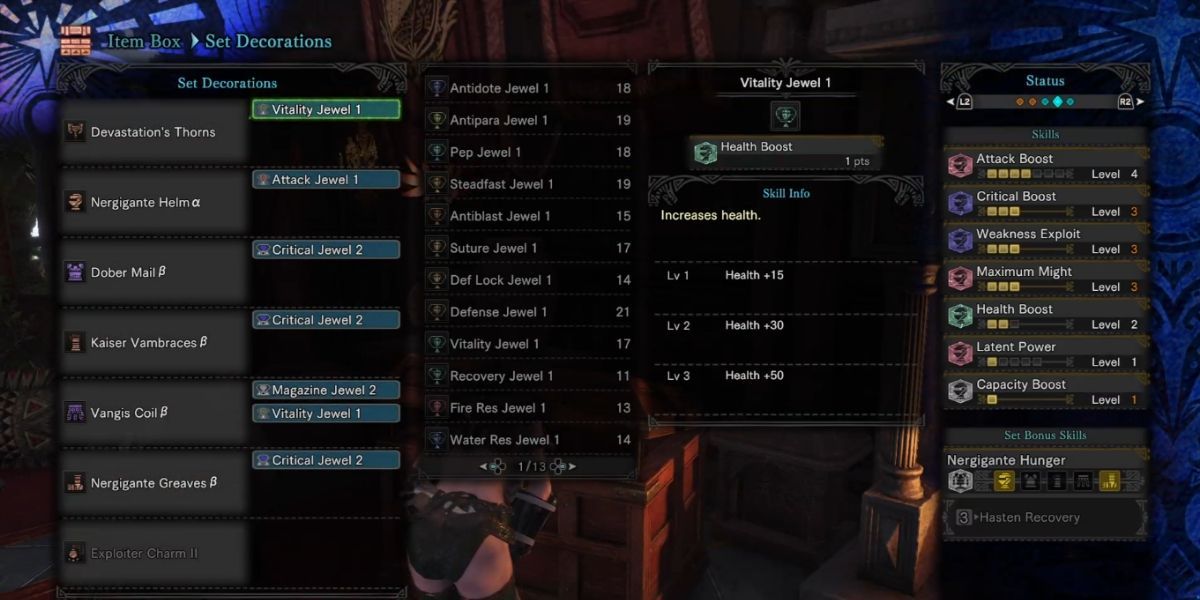 This blade is the ultimate go-to for Elder dragon conquering. With 756 Attack Power, Blue Sharpness, 0% Affinity, 150 Dragon Elemental Damage, and an Impact Phial, this blade is best-suited for the monsters in Monster Hunter: World. It’s spike-like makeup mimics the monster it’s made from and looks quite unique. This blade is also perfect for endgame battles, or doing a quick run with Elder dragons.

The only weaknesses that are associated with this blade is the length of time it is to attain this blade and the need to master the Nergigante Hunt. 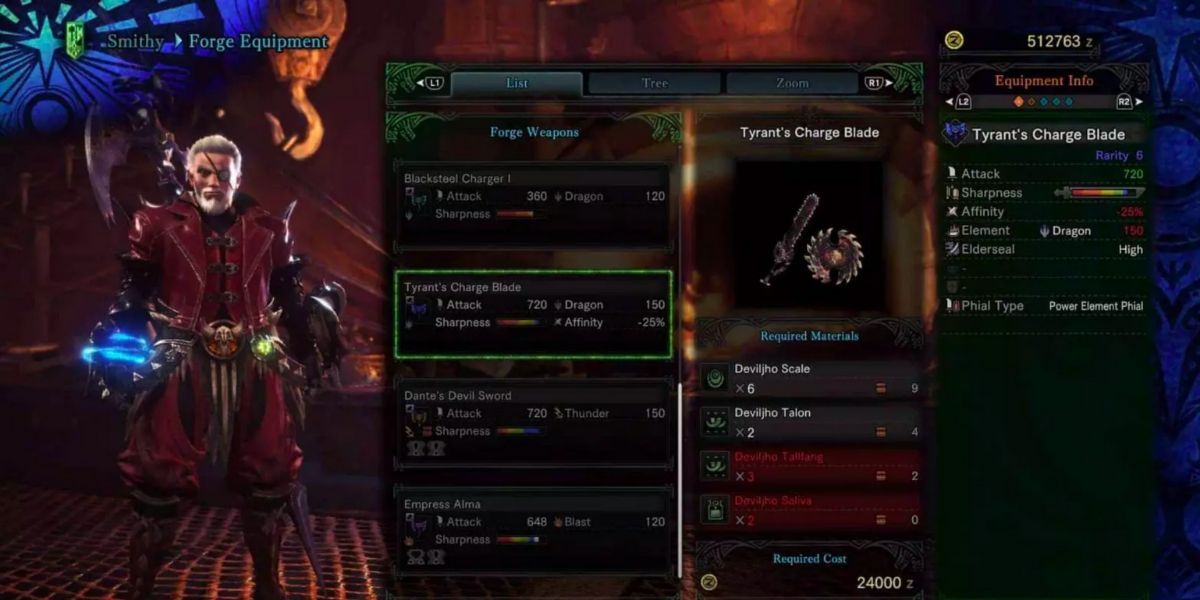 This blade is outclassed by Diablos Tyrannis II and Taroth Strongarm “Horn,” but it comes in just behind the two for good reason. A 720 Attack Power, Blue Sharpness, 150 Dragon Elemental Damage, a high Elderseal, and a Power Element Phial accompany this swift charge blade. The downside to this blade is that it has negative 25% Affinity, but the high Elderseal and the dragon damage makes up for the negative Affinity.

This blade is perfect for damage seekers and the Dragon Element is great for end-of-game monsters. While it may take time to get this weapon since it is so powerful, the hunt for it is most definitely worth it. 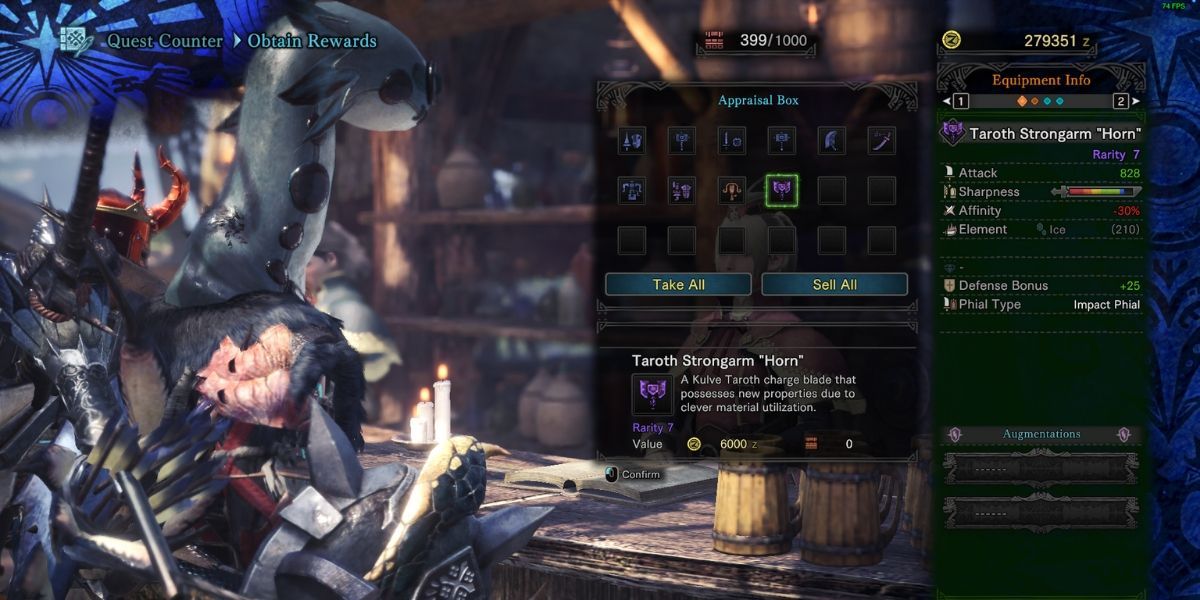 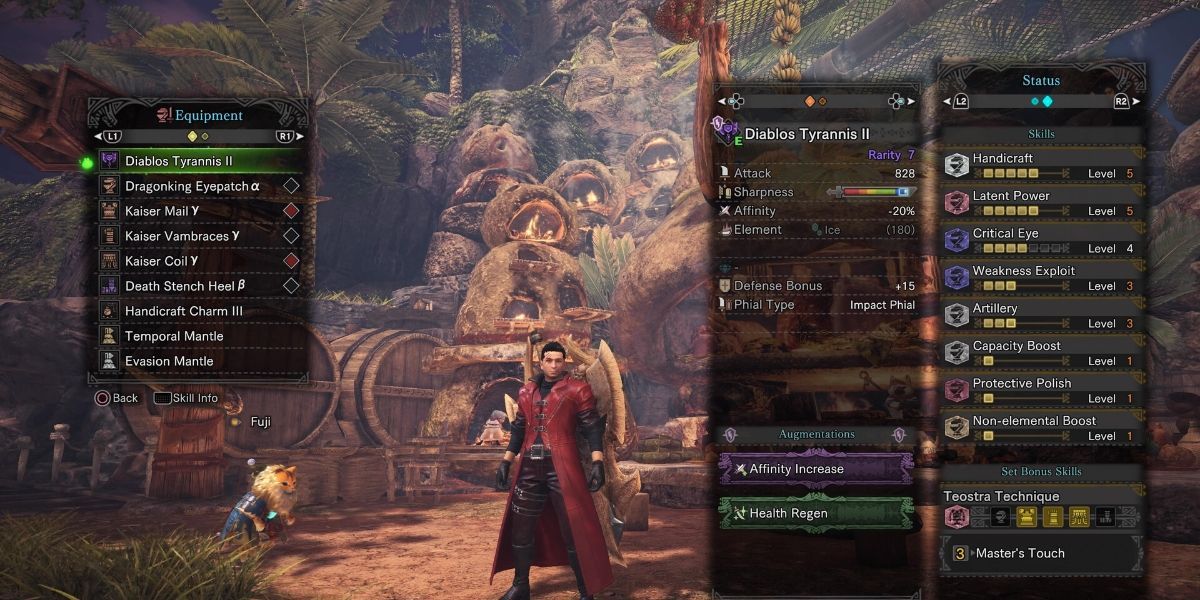 Diablos Tyrannis II – what’s not to love about this charge blade? It has 828 Attack Power, Blue Sharpness, Impact Phial, negative 30% Affinity, and 180 Ice Damage. It has the highest Attack Power on this list, and with enough handicraft, White Sharpness can be attained. It even has a defense bonus: 15%. With the right armor, and with the two augmentation slots, the negative Affinity can easily be conquered.

This blade is a fan favorite among many hunters, and is easily the most reliable on this list. Add this blade to the arsenal as soon as possible!