For the uninitiated, Magic the Gathering's story can seem like a dense, confusing tangle of names and places you're expected to know about. While that's true to an extent, it's also one of gaming's longest-running narratives, with sets released years ago still influencing the events happening today.

With so many planes to visit, and so many planeswalkers to check in on, sometimes plot threads can be left hanging in the air for quite a while. Ever since War of the Spark, the story has been slowly building towards something, and knowing where the current biggest ambiguities help make each new set all the more exciting to follow. Here are the five biggest mysteries left unanswered in the Magic the Gathering story as of the end of Innistrad: Crimson Vow.

5
Who Is The Wanderer? 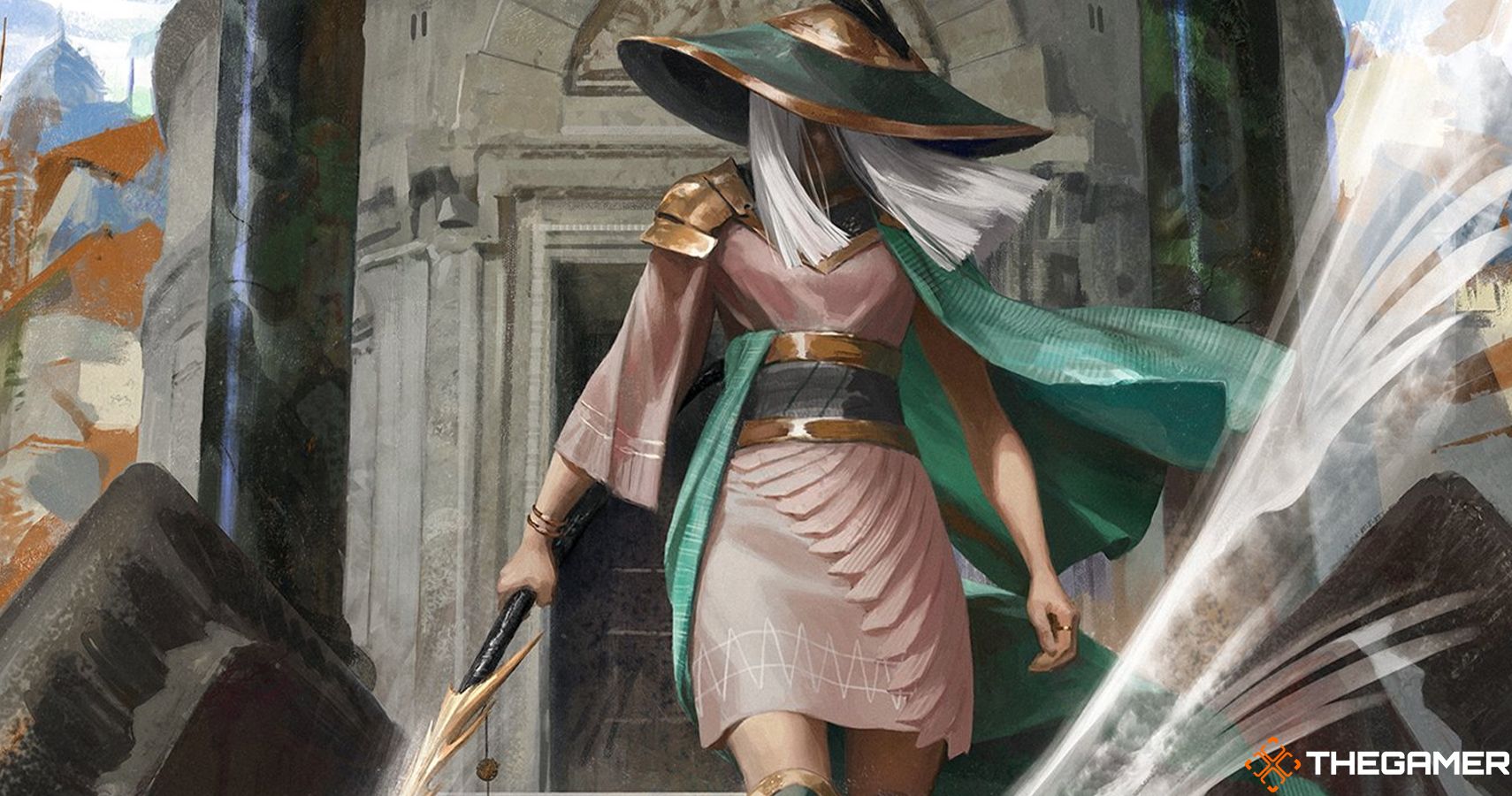 Introduced in War of the Spark, the Wanderer is a mysterious planeswalker whose very existence is confusing. While most Planeswalkers have to concentrate and put a lot of energy into moving from plane to plane, the Wanderer is the opposite. If she loses focus, she'll slip out of reality and end up somewhere else.

Constantly moving through the multiverse towards an unclear goal, even her actual name is a mystery – her card in War of the Spark is the only Planeswalker card to not have her name in the type line. She last made a very brief appearance in Ikoria, where she appeared out of thin air, killed a monster in a single strike, and then planeswalked away again. We've only taken it for granted so far that she's not an evil force in the multiverse. Her origins, her target, why she can't latch on to a plane, and even her face aren't known.

The only thing we know for sure about The Wanderer is that she has some sort of previous knowledge of the Tarkir planeswalker Sarkhan Vol, and even then the details of that relationship are nonexistent.

4
Who Was The Planeswalker Corrupting Ikoria? 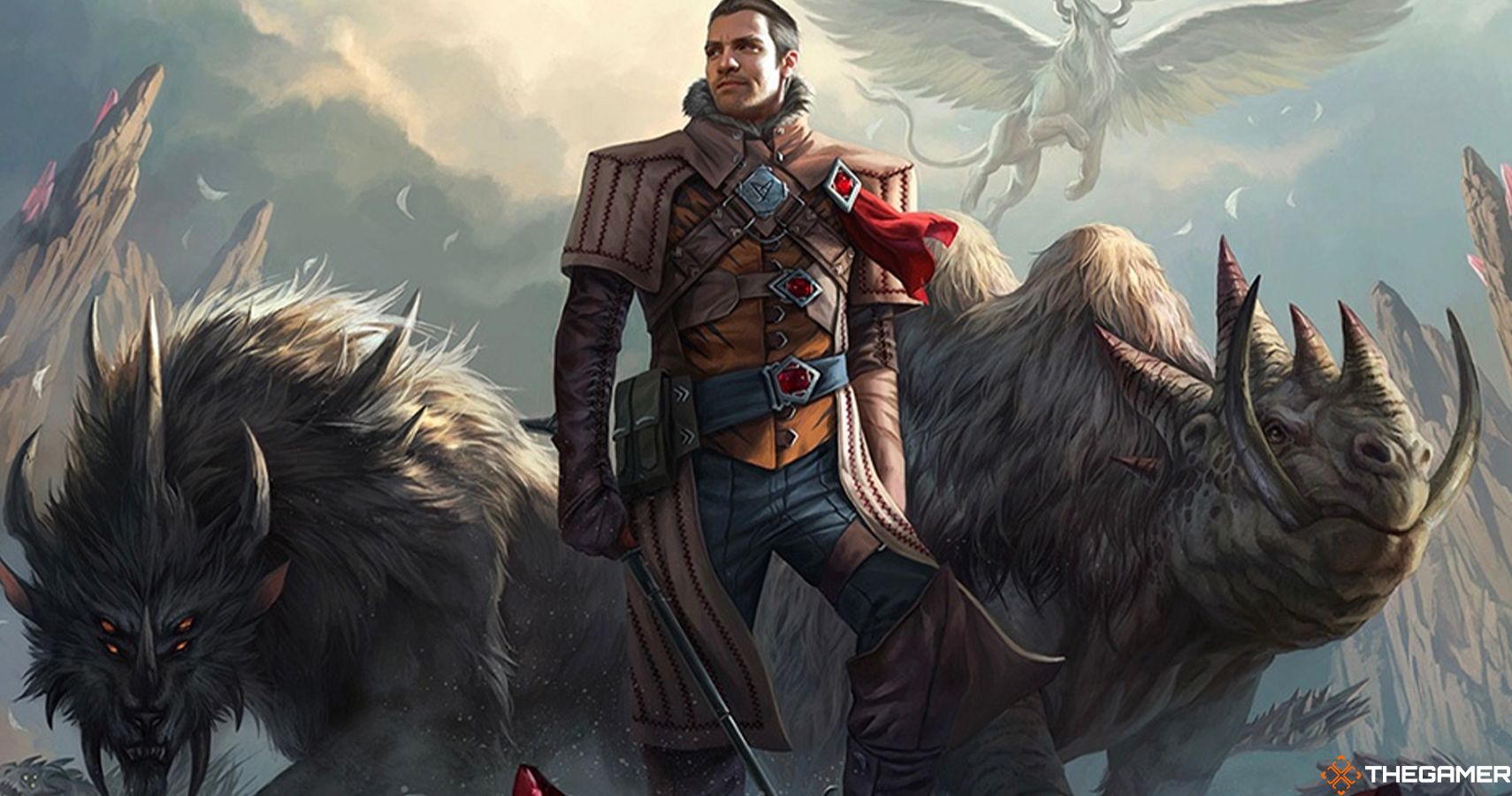 The Wanderer wasn't the only weird thing about Ikoria. In recent times the creatures of the plane have been mutating, becoming aggressive monsters that threatened the surviving humans in their walled cities. Even more alarming was the emergence of 'Bonders', people who could form relationships with these monsters and put them under their command.

One such Bonder was Lukka, a captain of the Coppercoats sworn to protect humanity. Cast out of the city of Drannith because of fear of his powers, he eventually investigated the strange goings-on with the planeswalker Vivien Reid. They discovered all of Ikoria's problems seemed to be coming from a crystal – the Ozolith.

In a fight between the Bonders, the humans of Drannith, and some opportunistic monsters, Lukka connected his mind and communicated with an unnamed Planeswalker who was using the Ozolith to manipulate Ikoria for reasons unknown. This connection drives Lukka mad, ultimately resulting in his Spark later igniting and him becoming a Planeswalker.

The question is who was that Planeswalker controlling the Ozolith? They weren't from Ikoria, and didn't even really care about what was going on there, so why get involved at all? Were they even on Ikoria, or were they somehow pulling the strings from another plane entirely? Considering Lukka seems to be an increasingly important part of Magic's story following his reappearance in Strixhaven, maybe this is a question Wizards will eventually have to answer.

3
What Is Emrakul Doing In Innistrad's Moon? 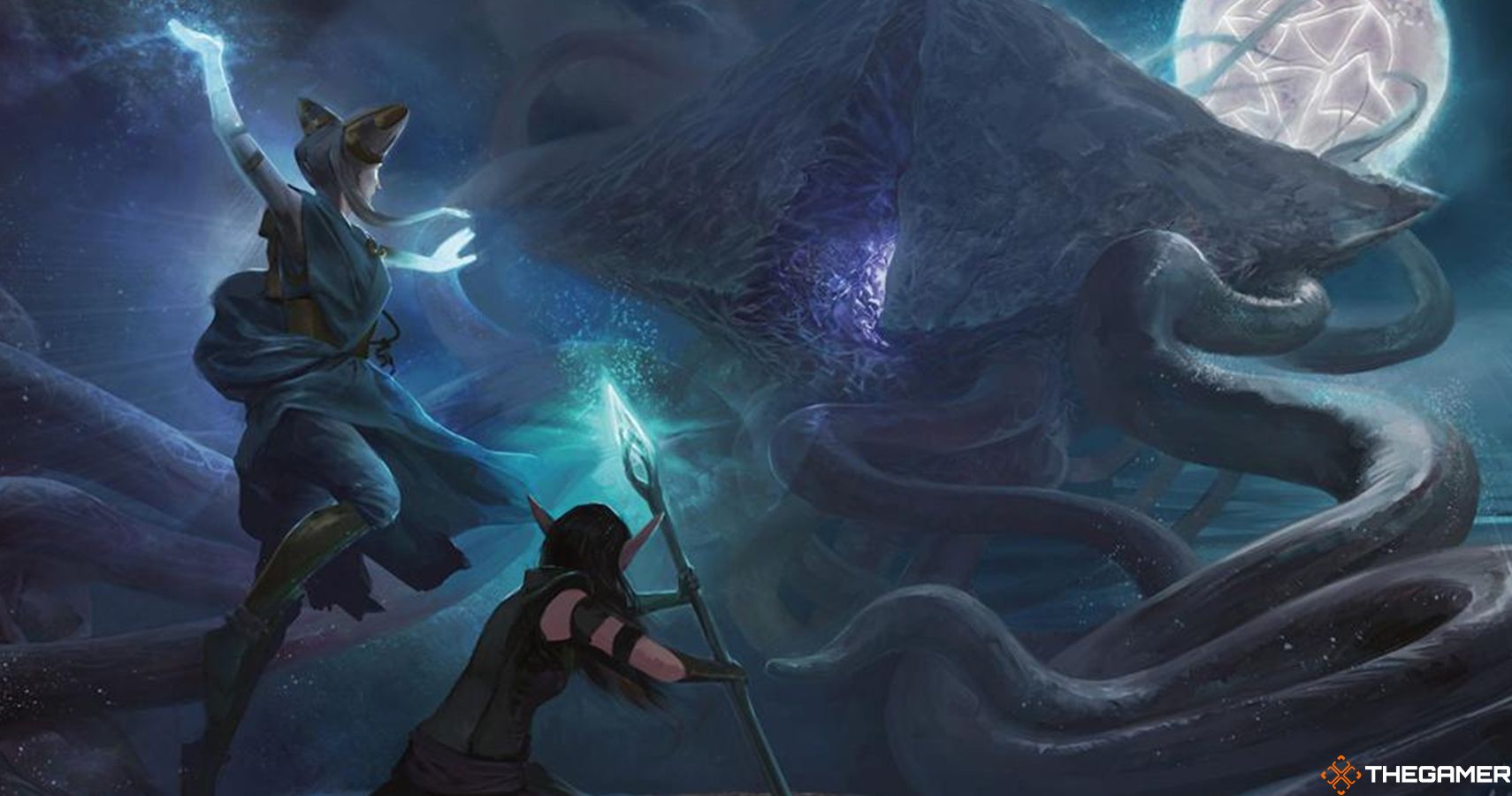 The Eldrazi are creatures who exist in the gaps between planes, known as the Blind Eternities. Impossible for mortals to fully perceive, let alone understand, their arrival on a plane usually means the end of all life on it. That is, until the Planeswalker Nahiri lead them from her home plane of Zendikar to the gothic world of Innistrad.

In Shadows Over Innistrad and Eldritch Moon, Planeswalkers sworn to protect the multiverse (the Gatewatch) faced off against the encroaching Eldrazi as their corruption drove Innistrad's residents insane and warped their bodies into writhing, tentacled masses. By all rights it should have been the apocalypse for Innistrad, and yet she willingly allowed herself to be sealed away inside Innistrad's moon by the Gatewatch.

Before this happened, the planeswalker Jace Beleren psychically communicated with Emrakul, and she described herself as being "incomplete". She argued that the people of Innistrad should be receptive to her, rather than fight her. More worryingly, she said it was "not [her] time" before being sealed away.

First, how is an eldritch being forcing its way into reality 'incomplete', and how long will It take for her to be complete? The comments about how Innistrad should welcome Emrakul's presence also raises questions as to whether the Eldrazi are actually bad, or simply too alien for those who encounter them to understand. Emrakul didn't appear at all in Innistrad: Midnight Hunt or Innistrad: Crimson Vow, suggesting we could be waiting a long time before we find out exactly what Emrakul wants.

2
How Did Elspeth Escape From The Theros Underworld? 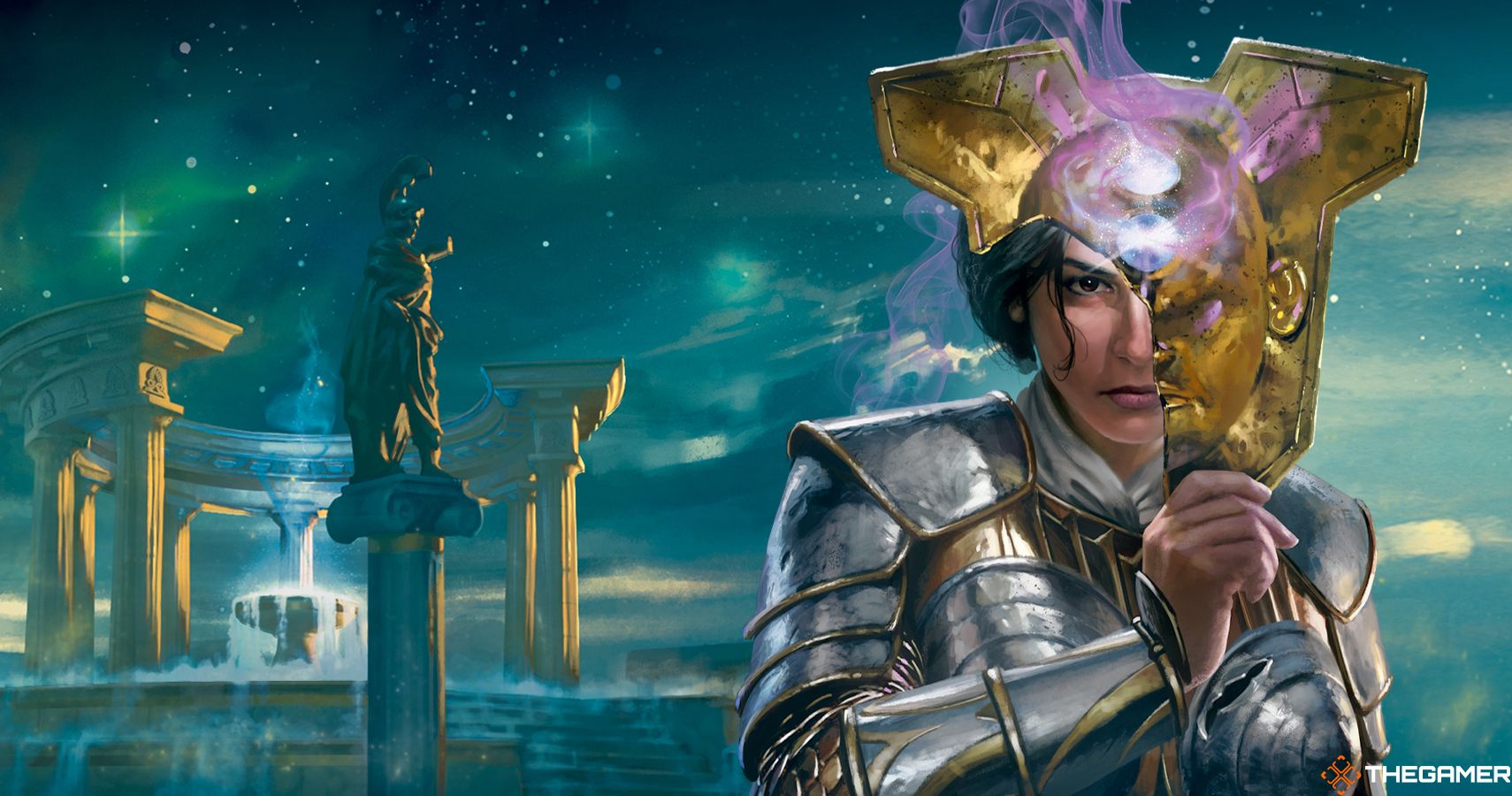 Much of the Greek-inspired plane of Theros' story revolves around the planeswalker Elspeth Tirel. A Knight from the Alaran shard of Bant, Elspeth travelled to Theros to seek aid from its powerful gods against the rising threat of the Phyrexians.

In our first trip to Theros, Elspeth worked as an agent of the sun god Heliod, tasked with taking down the false and scheming god Xenagos. During her mission, she formed a relationship with, and then accidentally killed, the Theros hero Daxos. In the culmination of the story, Elspeth killed Xenagos, and offered her life in exchange for Daxos', but her close friend and fellow planeswalker Ajani encouraged her to flee from Theros before the god of death Erebos had time to notice.

Unfortunately, she was intercepted by her own patron Heliod. A jealous and paranoid god, he took Elspeth's own weapon and murdered her with it. In Theros, the dead have a choice: walk through the grey mists for eternity, or give up their identity and memories to return as a golden-faced 'Returned'. Elspeth, empowered by her love for Theros and her allies, took the third option: escape from Theros in-tact.

And… that's all we really know. We have a few ideas of what happened through story spotlight cards in Theros: Beyond Death and a very brief summary, but it isn't much: tormented by the nightmare planeswalker Ashiok, Elspeth managed to pull a corrupted version of Heliod's weapon out of her own nightmares and created the Shadowspear, which she then convinced the citizens of Theros was real, and Heliod's was a fake. On Theros, belief makes things come true, and so Heliod was weakened by those questioning his godhood and eventually punished by Erebos for his deeds. 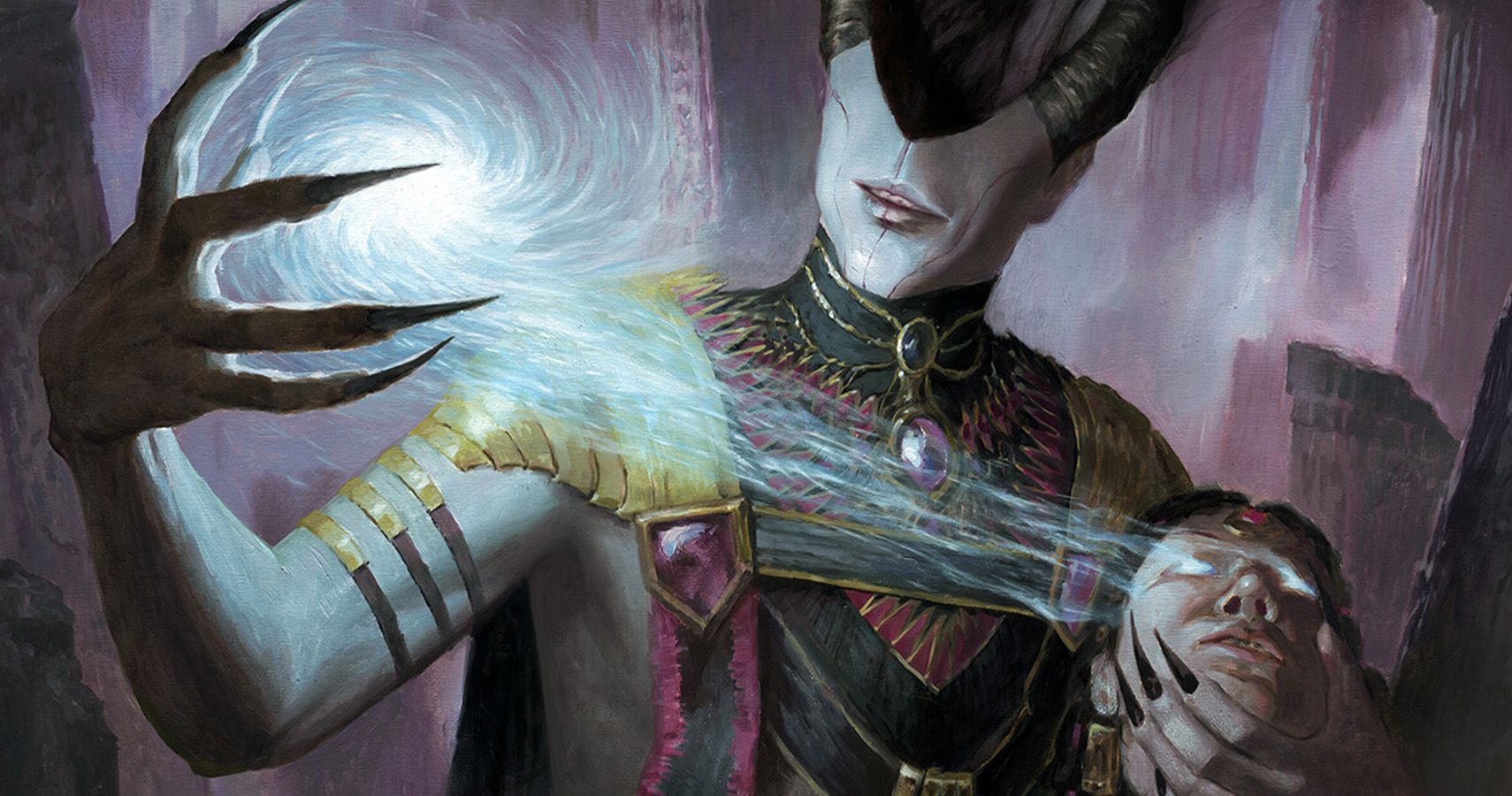 Somewhere in the middle of all this is Calix, an agent of the god of destiny Klothys who became a planeswalker solely to pursue Elsepth across the multiverse. We've also still got Ashiok rattling around being creepy, and we still don't know the specifics on how exactly Elsepth escaped from the underworld with her memories intact.

The frustrating thing is none of this was left vague for ongoing story reasons, it was simply not answered because the story was never published. Theros: Beyond Death launched at a time when people were incredibly unhappy with how the novels for War of the Spark were handled. In Greg Wiesman's novels, War of the Spark: Ravnica and Forsaken, Characters had their queerness erased, established rules of planeswalking were ignored, and characters regularly behaved in incredibly out-of-character ways.

As a result of unfortunate timing, the outcry from this caused Wizards to reevaluate its story vetting processes, which meant the Theros: Beyond Death story simply never came out. Wizards continues to say it is waiting for "the right time" to publish it, but with Elspeth now appearing in the upcoming set Streets of New Capenna, there's about to be a lot of confusion as to how Elspeth was dead and now very much isn't.

1
What Was Vorinclex Doing On Kaldheim?

Now is actually a really good time to get into the Magic story, because we're at the very start of a new arc concerning the return of Magic's mechanical body horror species, the Phyrexians. Artificial beings obsessed with "compleating" any and all organic life to its own design, the Phyrexians have managed to break into multiple planes through Karn, a golem planeswalker who was an unwitting carrier of their black oil.

The Phyrexians have been dormant in Magic's story for a while, with the Eldrazi and Nicol Bolas taking over as the big baddies for the last 10 years. But starting with Kaldheim, the Phyrexians have somehow been creeping back out into the multiverse. The Phyrexian Praetor Vorinclex was spotted on Kaldheim by the planeswalker Kaya, who was investigating reports of a 'monster' on the plane.

Later on, Gatewatch member Teferi assisted Arlinn Kord in returning the sun to Innistrad. What he didn't tell her until the very end of their adventures was that he was investigating the Moonsilver Key, a powerful artifact on Innistrad that might possess an answer to the Phyrexian invasion happening under everybody's noses. Before leaving Innistrad, he warned Arlinn to keep an eye out for any black oil, and to alert the Gatewatch if it should ever appear on Innistrad.

The big question hanging over this development is that, despite being threats to multiple planes, the Phyrexians themselves aren't planeswalkers. Karn spread the corruption to his artificial plane of Argentum, which eventually spread and turned into what we now know as New Phyrexia, and it took years of breeding, research and mutilation for them to find a way to break into Dominaria before that. Vorinclex isn't a planeswalker, so how did he end up on Kaldheim?

Is somebody intentionally spreading the Phyrexian corruption and assisting them? Have they found a way to travel between planes without possessing a spark? What are their plans now, in a world free of both Bolas and the Eldrazi? With rumours of more Praetors appearing in other upcoming sets, it looks like the Phyrexians are going to be the driving force for the story for a few years to come, and Kaldheim and this trip to Innistrad are the very beginning of it.