Sega’s original Company of Heroes is an exceptional real-time strategy game. An ambitious new Kickstarter project, titled Company of Heroes Board Game, wants to bring that World War II-themed action to the tabletop. With less than 24 hours left in the campaign, the project is fully funded and has already unlocked tons of stretch goals.

Developer and publisher Bad Crow Games is best remembered for its unusual Kickstarter campaign that made headlines in 2016. Its Armored Core RTS tabletop game dropped its license mid-campaign, becoming Mech Command RTS instead. The campaign was ultimately successful, but ended up costing backers more after production delays and shipping complications. The final product has decent ratings online, but proper reviews are few and far between. 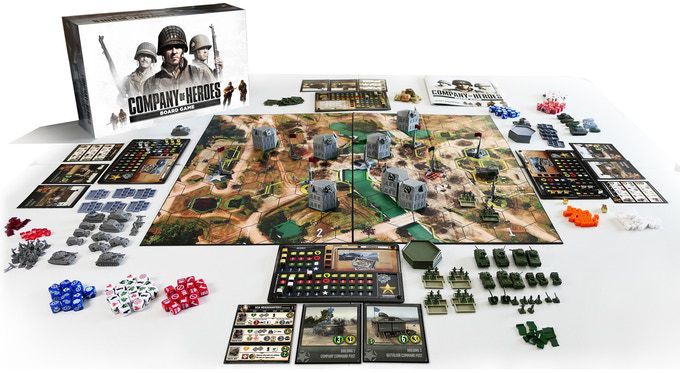 A mock-up of the core products and upgrades on offer in the Company of Heroes Board Game Kickstarter campaign.
Bad Crow Games

Fast forward to this year, and Bad Crow is back with another project. This time they’ve got the full support of Sega, the owner of the Company of Heroes license. The game itself looks pretty slick, and the price points are fairly low considering what you get in the box. For $65 you get the two-player core set, but for $99 you get all four factions plus a host of extra stretch goals. The campaign page includes a few actual-play videos, so you know what the game actually plays like before it shows up on your doorstep. Just scroll down past the video in the header, which is actually a lengthy paid advertisement.

Like many modern board games on Kickstarter, this is more of a pre-order than anything else. The game is already designed, and backers are being asked to help with production. As such, there are a myriad of options and add-ons available, and not all of the stretch goals will arrive with every version of the game.

It’s worth noting that this is not your usual tabletop strategy game. Instead, it’s being billed as a direct port of the original video game. I’ve written about the pitfalls of porting video games directly to the tabletop in the past, and tend to prefer games that go in a different direction.

In motion, expect Company of Heroes Board Game to involve building and upgrading units on the fly with the help of some rather dense-looking sideboards. Also understand that the game’s real-time mode involves the use of a sand timer, and is effectively a sped up version of the turn-based gameplay. Bad Crow says backers should expect the game to ship in May 2020.