The fifth chapter of The DioField Chronicle may be a somber one for some. While the Blue Foxes are continuing their climb, a long-standing party member will, unfortunately, have to be taken out before this chapter concludes. While the previous chapter seemed to add more variety to its mission structure, the fifth chapter takes a back to basics approach.

Once you start the mainline path, you will find yourself engaging in multiple battles with very little in the way of distractions in between missions. You will also be fighting on some of the largest maps seen up to this point. Time really is a factor in some of these missions. Luckily, we are happy to lead you through them all.

Next, it is time to level up out facilities. However, brace yourself, it is going to cost you 40,000 gold a piece to upgrade each final level. Say goodbye to all your money. You will have the ability to upgrade both your Magicum and Weapons Development facilities. Which means you will need to shell out 80,000 gold. Oof. Thankfully, you can recoup a decent amount of that by witnessing the story segments for Castevere and Fredret. Talking to them will yield 10,000 gold a piece. You should also talk to Waltaquin, though talking to her only gives 5,000 gold for some reason.

When you are ready to move on, select the Riots to the West mission in the war room.

Riots To The West 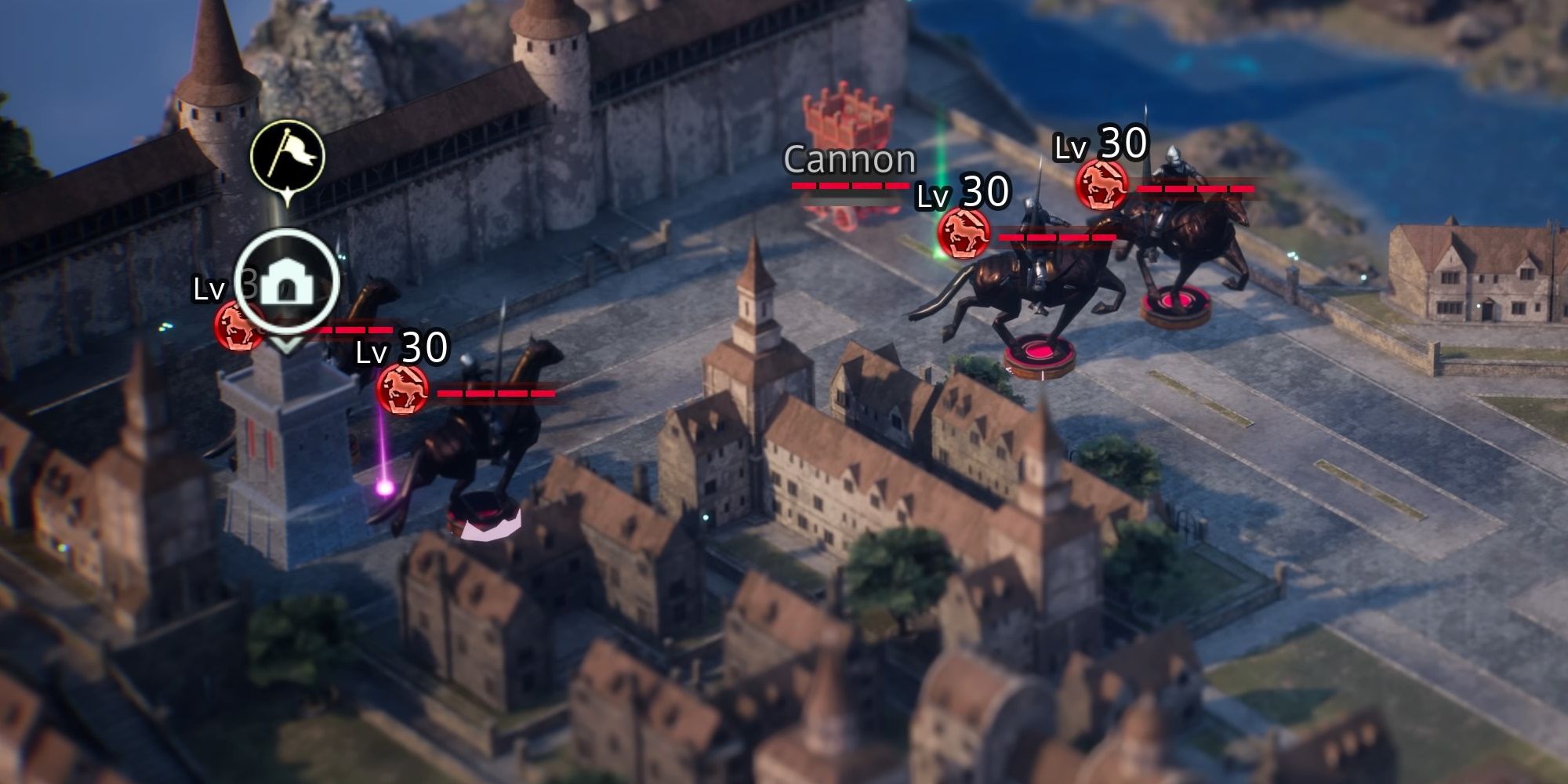 This is a rare two phase battle. So don't delay on grabbing the treasure chest thinking you can grab it in the third phase. 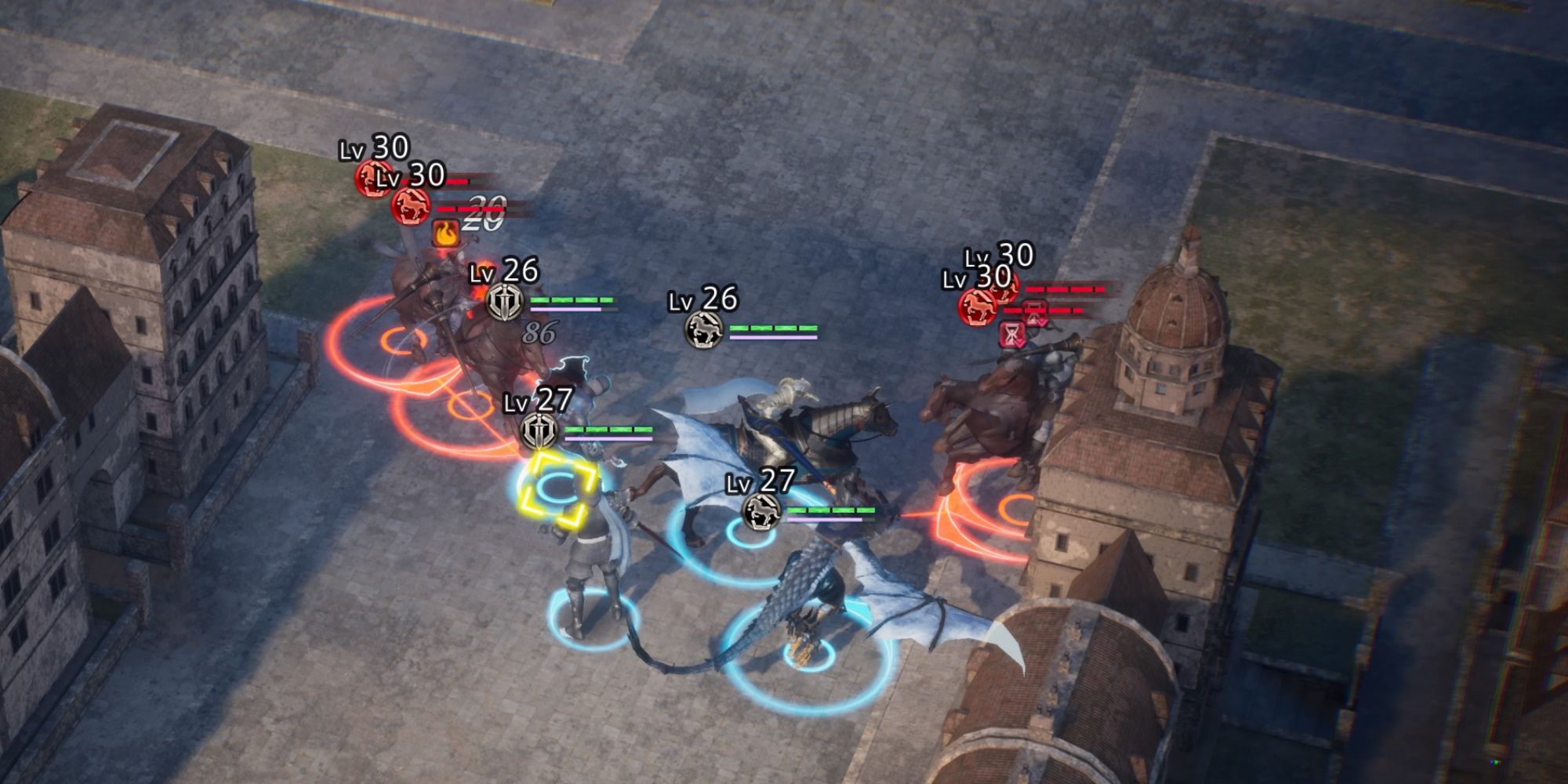 Once you have cleared this first area, and activated both towers, the drawbridge in the center will drop. Inside there are two beefy Ogres, a Soldier, and two Archers. We approached this battle by having Izelair use her Shield Wall in the center of this area, then we took out the archers in the back. 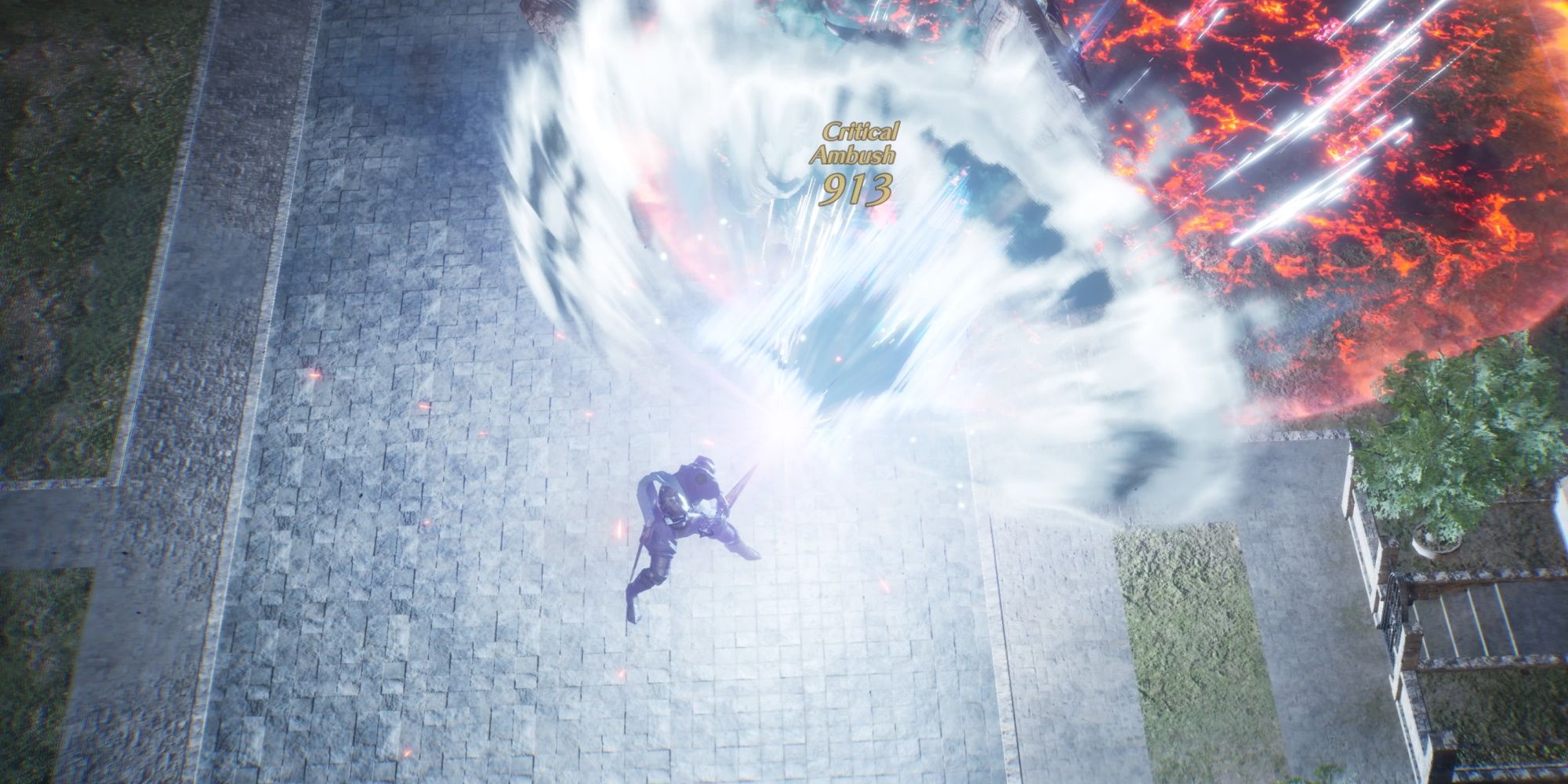 Once they were dead, we used a Cavalry unit to group the Ogre's and the Soldier together. From there, we just wailed on them with our hardest hitting attacks. It didn't take long for them to fall. Just make sure you send someone to collect the treasure nearby.

In The Palm Of The Hand

When you get back to your base, you can earn some quick money by speaking with your comrades. Talk to Izelair, Estalt, and Zoruaq. That'll net you an easy 30,000 gold in total. Lastly, talk to Iscarion and you will unlock the "End The Riots" Side Mission. After you talk to Catharine to start the main quest, you can actually talk to her again for an about 10,000 gold. Once you are ready to start the mission, select it from the map.

Some side missions will be unavailable to you for the rest of this chapter once you proceed with the "Kill The Archbishop" mission. 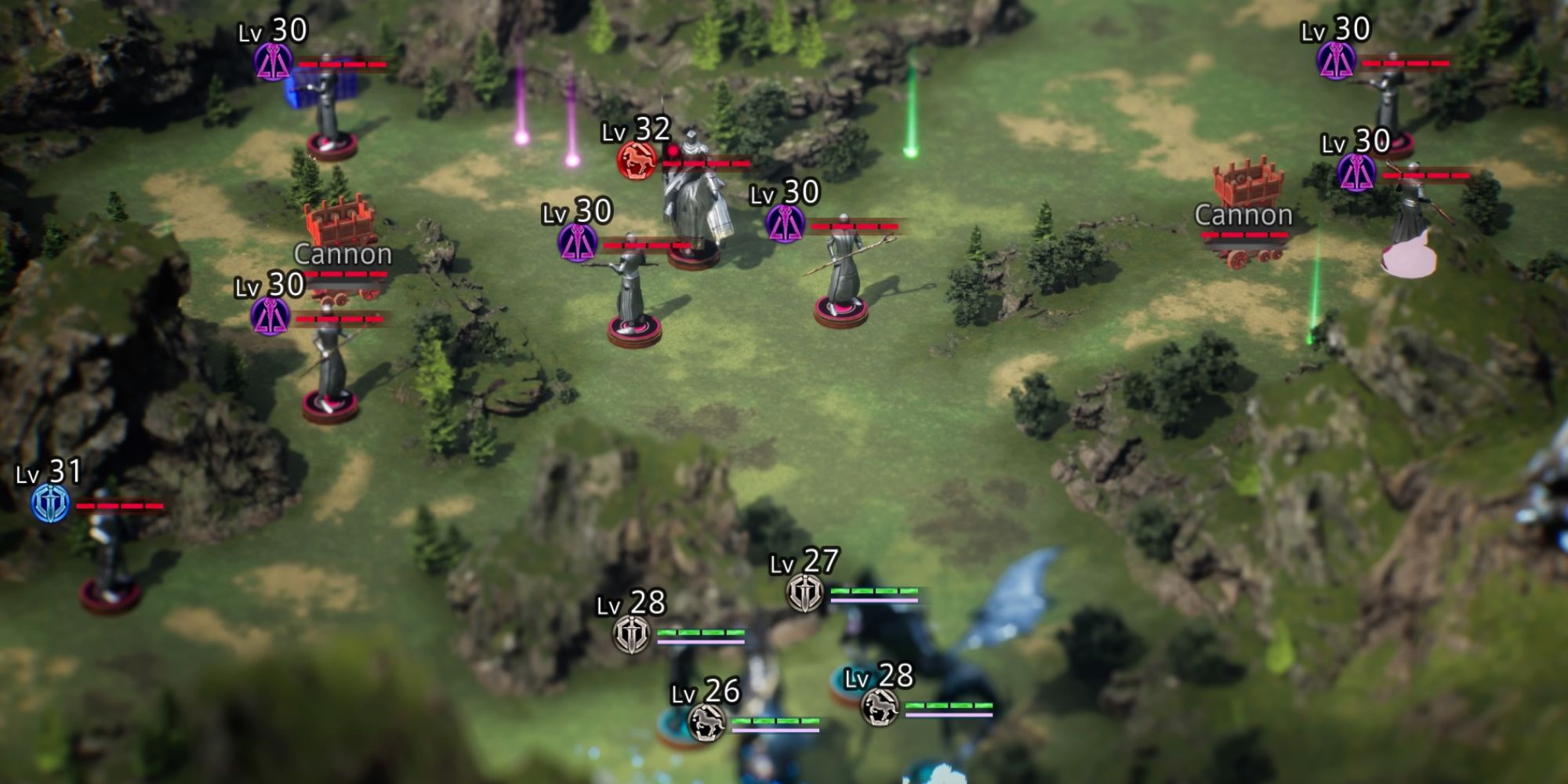 You're going to want to circle around to the left. Fight the lone Soldier, and the nearby Mage. Throughout your fight with the Solider, Mages will keep stumbling over and engage you. Every time a Mage gets in range, throw Andrias at them, and take them out with his Assassination techniques. By the time you have finished with the Solider, you will likely have taken out around three Mages. 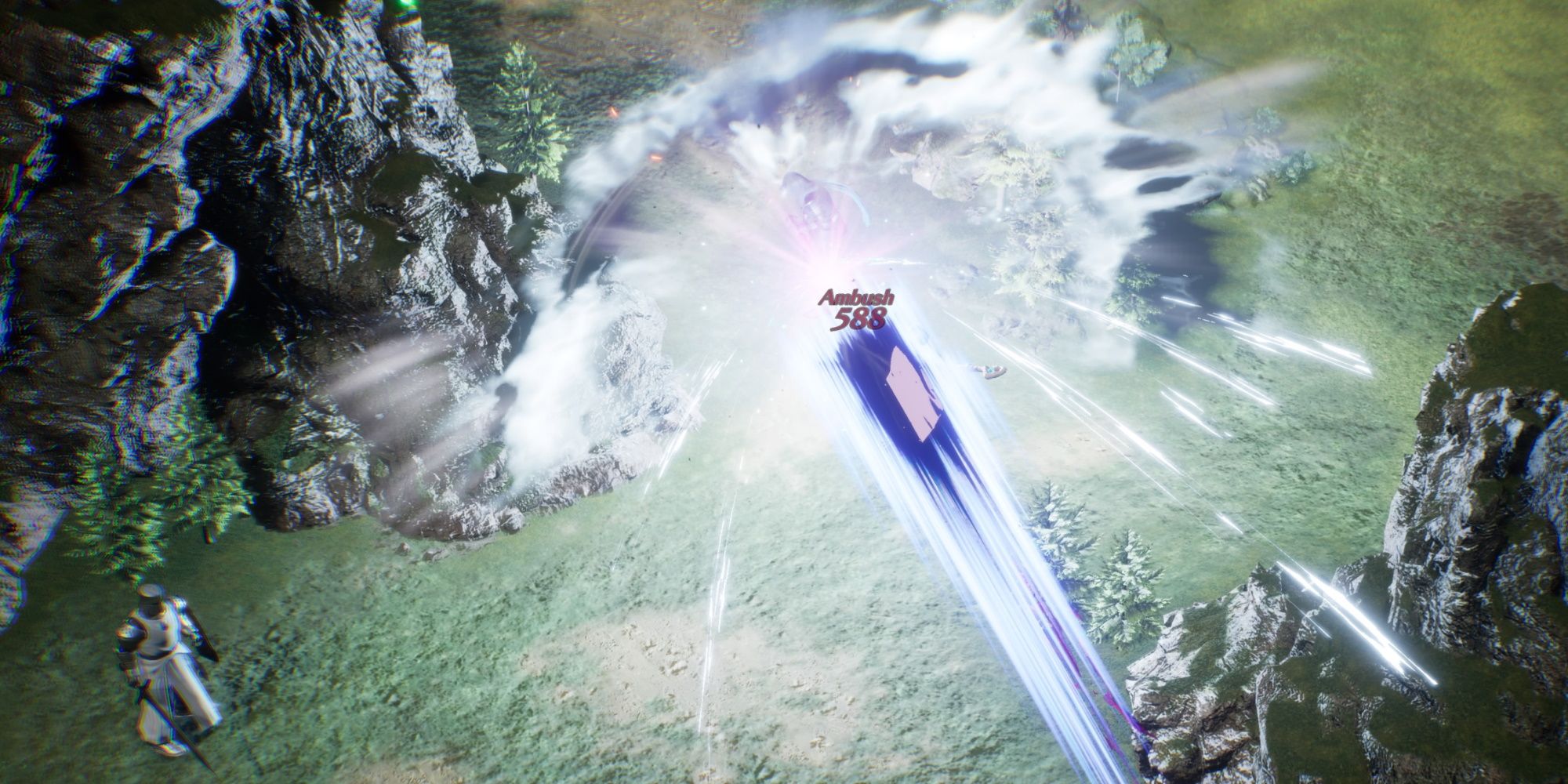 Head north, take out the Cannon Tower, and kill the Mage if he is still around. After that, head straight for the other Cannon Tower, sitting in the center of the stage, and fight the remaining units, including the Cavalier. Similarly, use your heavy hitters to take out the Mages (so, Andrias or maybe Donovar). You will now be right next to the Archbishop when he shows up. 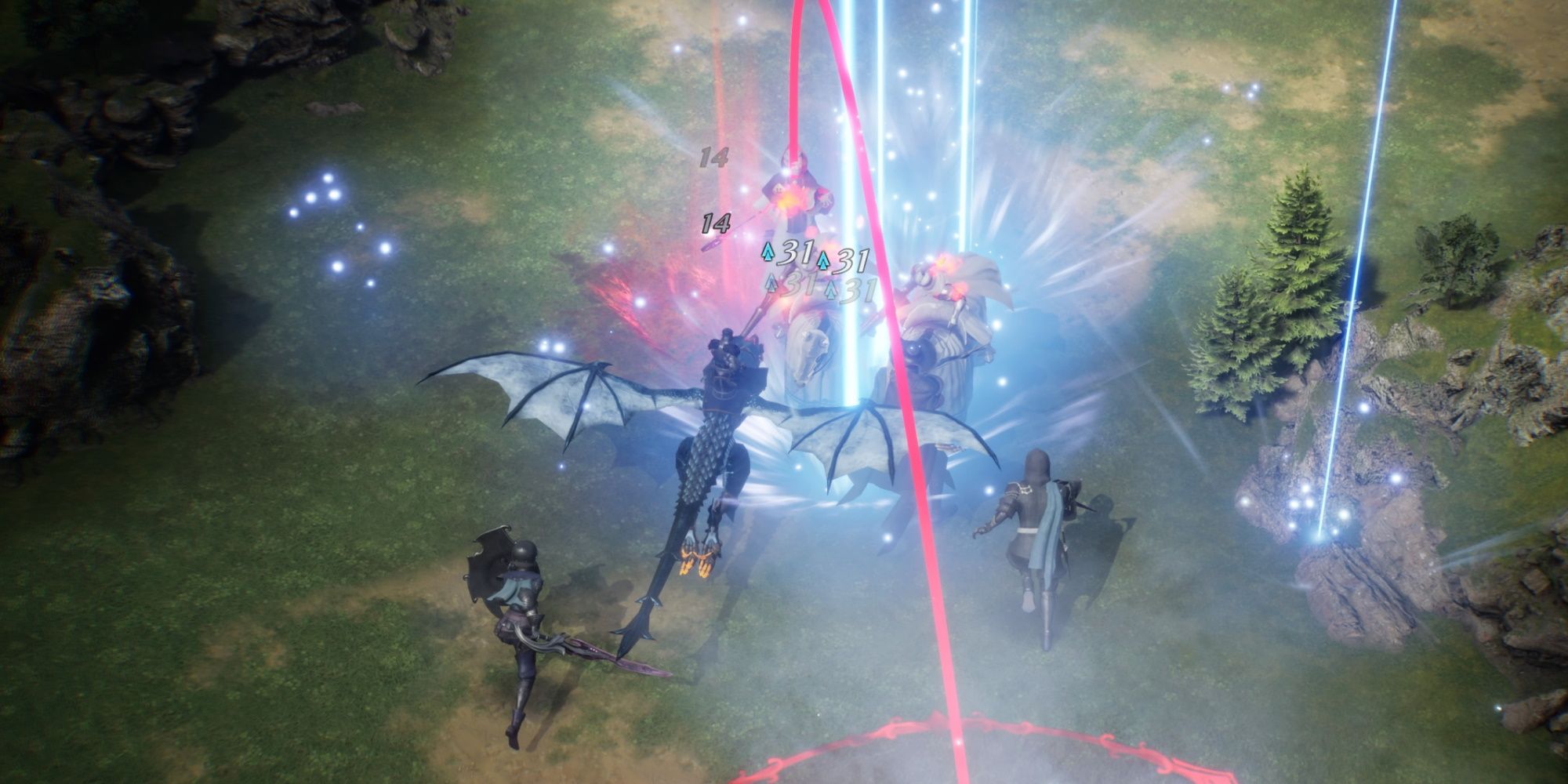 Once the Archbishop shows up, start bombarding him and the Cavalry units with him with all your AOE attacks. You should be able to clear out the Cavalry units and take out one of the health bars from the Archbishop. Once you take that health bar out, two Mages and two Soldiers will appear out of nowhere. Just around that time the other group with two Soldiers and a Mage will arrive. This is when you are going to unload your summons on this massive group. Finish them with your AOE attacks. 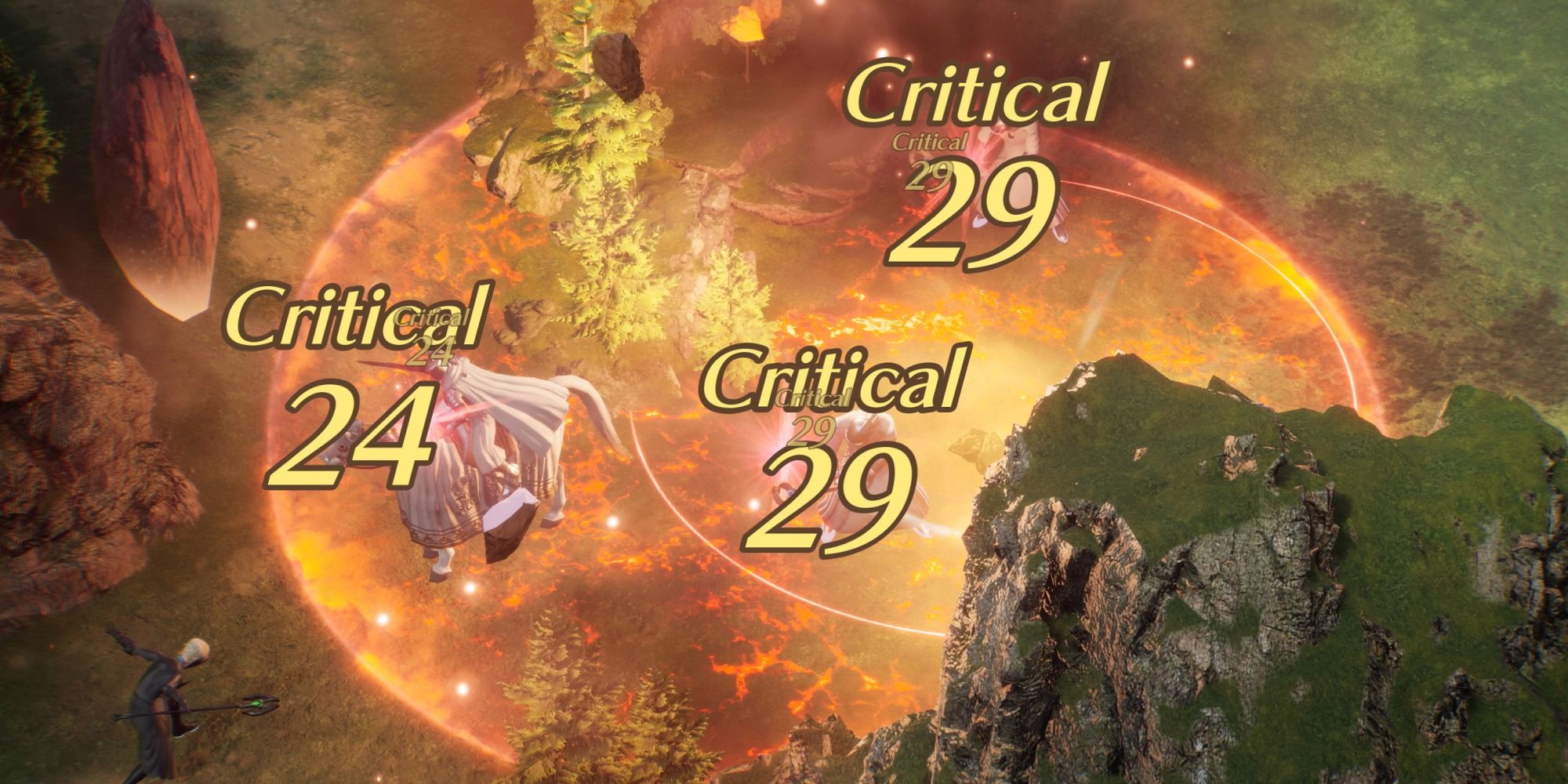 After that, you will just need to clean up the scraps. Finish the Archbishop, and put any remaining troops out of their misery. If you are running low on EP, just swap your units. You should be golden.

Once you kill the Archbishop, you will spend all your time in between missions hanging out in your tent. Predictably, this means that there is no side content of note throughout the rest of this chapter. It is just a procession of battles from here on out. 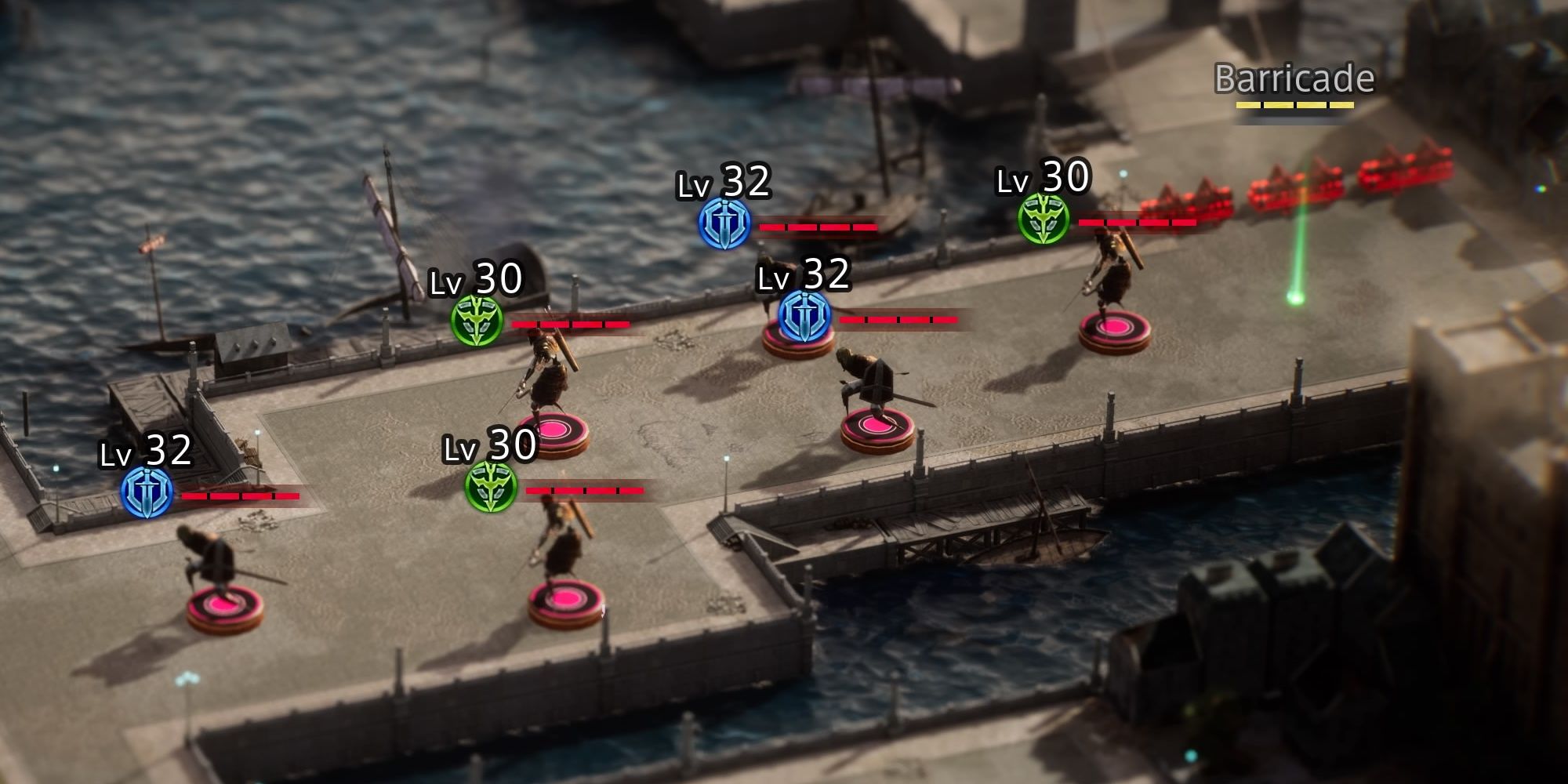 Rating this mission for difficulty is actually a pretty tough thing to do. On one hand, the enemies here aren't particularly tough. So, we don't anticipate many people failing the mission. However, completing the mission, while also acquiring all the rewards is quite a bit tighter. This is a long stage. Just the time it would take to travel from one end to the other would eat up a decent amount of the six minutes you are given to get the Platinum Bar. And along the way you do need to kill a ton of enemies. 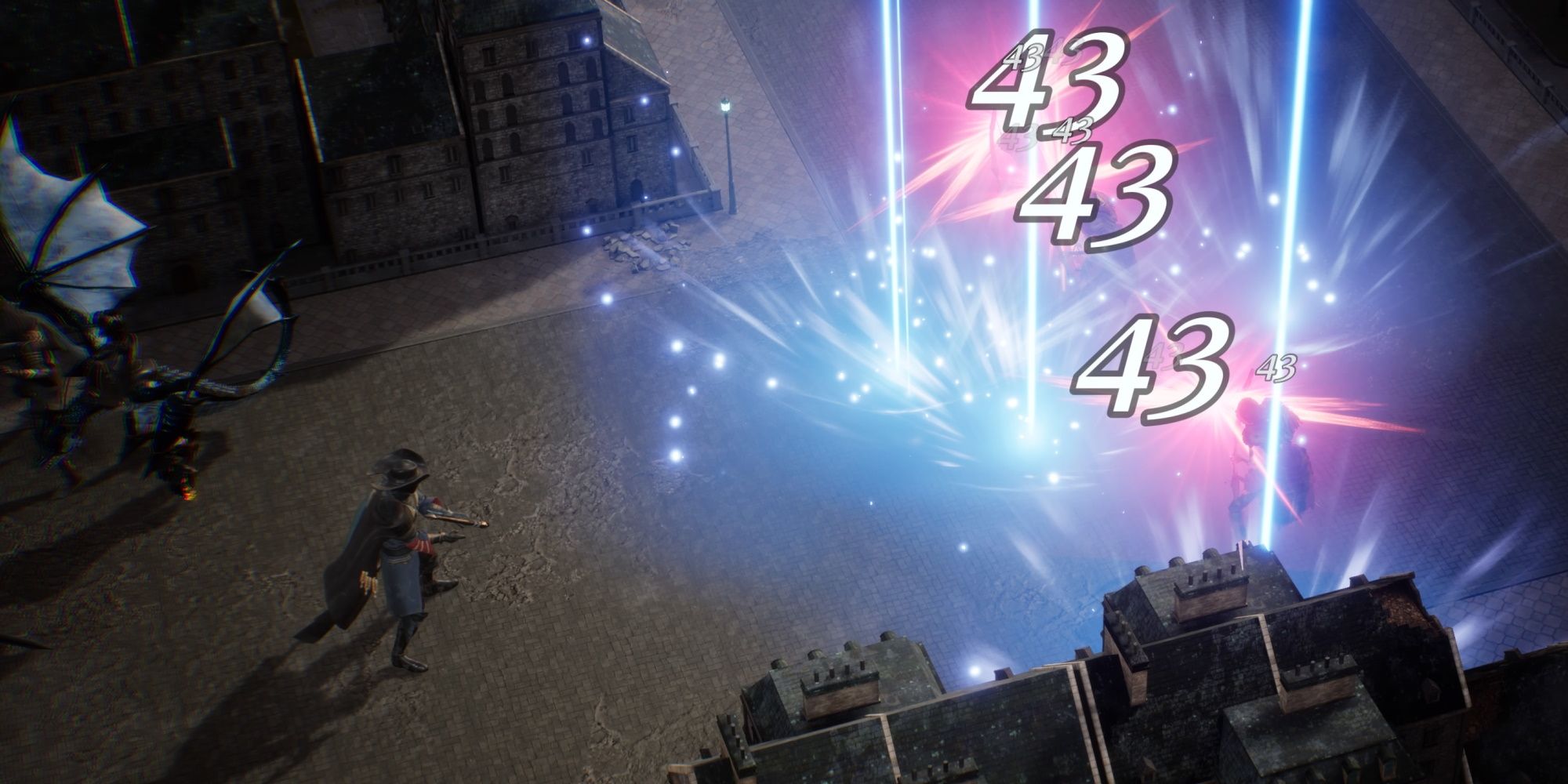 However, you can get around this issue by having a smartly constructed team and knowing when to use your summons. While typically we recommend holding all your summoning energy until the end of the battle, and then unloading on the toughest enemies the stage has to offer, the enemies you fight at the beginning of this stage aren't actually considerably more powerful than the ones you fight at the beginning. So, instead, we're going to focus on killing as many as possible. You will want to bring a Cavalry Unit with you, as they are excellent as grouping enemies together. Lastly, make sure you have AOE attacks on all of your troops. 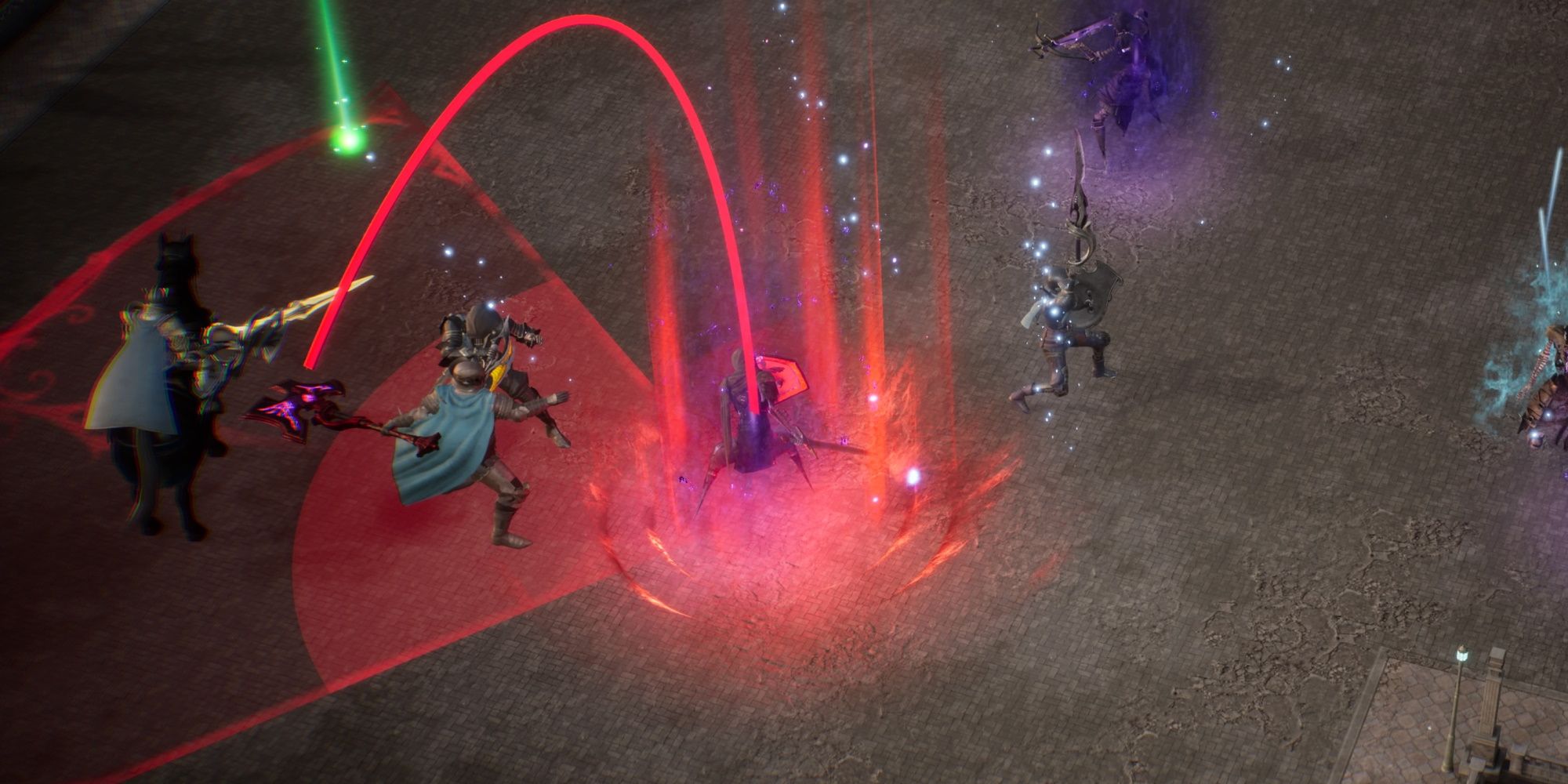 At the beginning of the stage, draw the attention of the group of Undead Soldiers with a mounted unit, and draw them to the other group with the archers. Take out this group with AOE attacks. Then, move to the north, and fight the enemies on the bridge. They are all a little spread out, so you will want to use your Cavalry Unit's mounted attack to group them together. Then hit 'em with your AOE attacks (preferably, you do this near the barricade so that you can destroy it alongside the enemies. 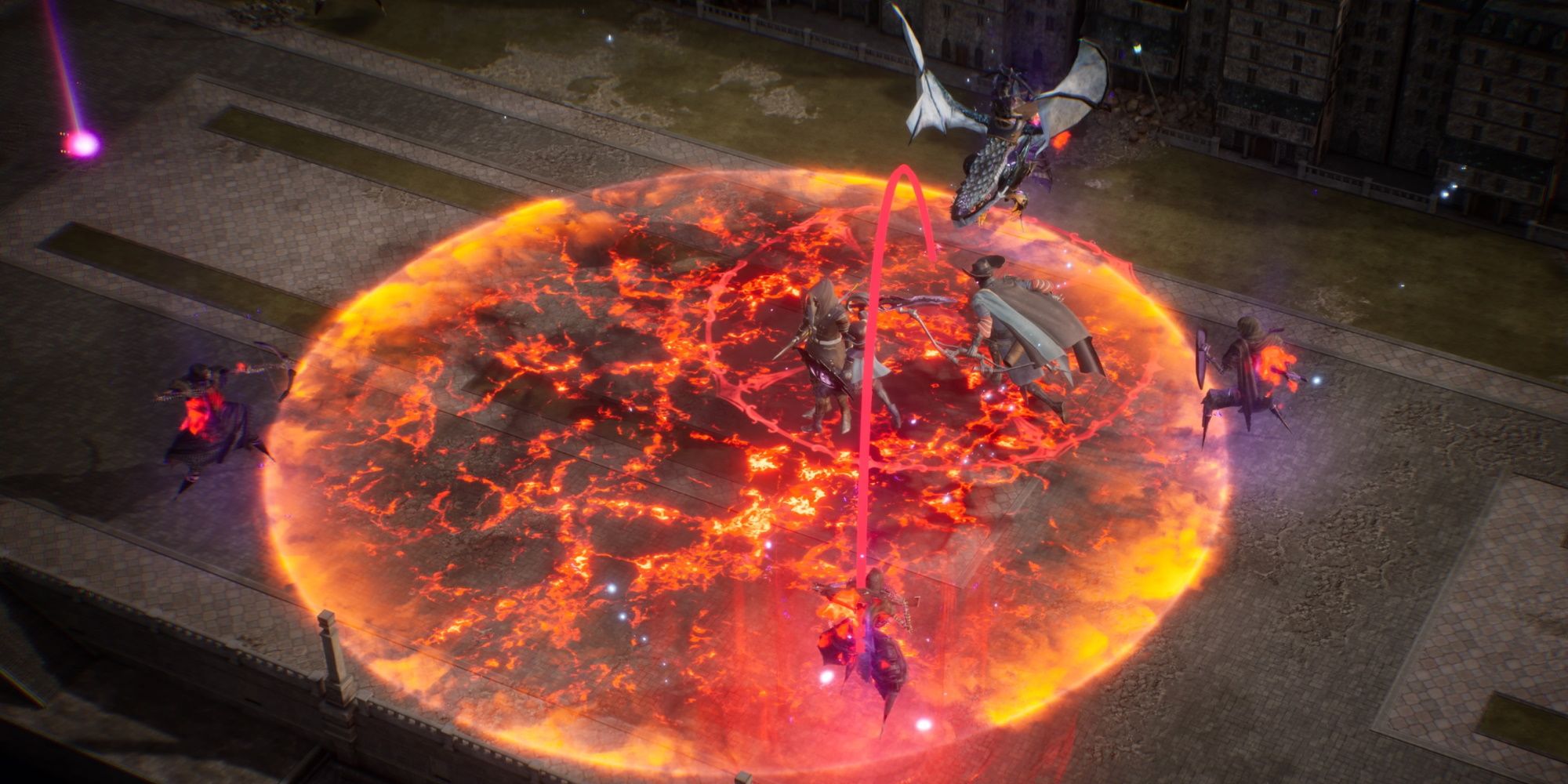 In the next area, you want to run right past the first group, and draw them into the second. Now, whip out the summons and finish them off with AOE attacks. Onto the final area. Once again, these units will stay pretty spread apart. However, with the use of the Cavalry Unit's Viscous Swing, you will be able to group these enemies efficiently. Hit them with AOE attacks. Eventually another four units will arrive and rush to your locations. Now you are in the final step. Hit them all with your last summon and all your AOE attacks. Swapping out units if you are low on EP. 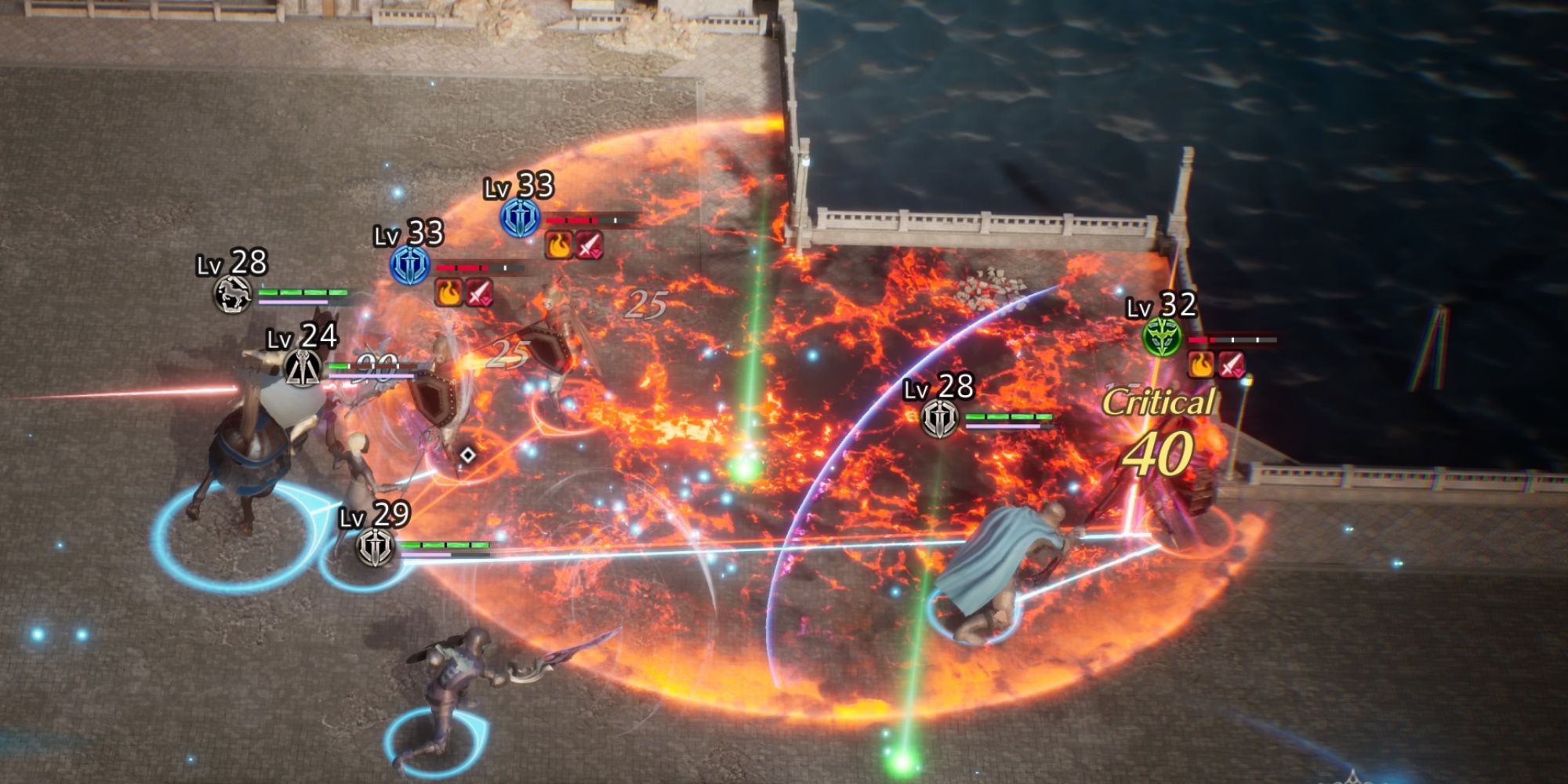 If done correctly, you will be able to complete this mission in under six minutes. 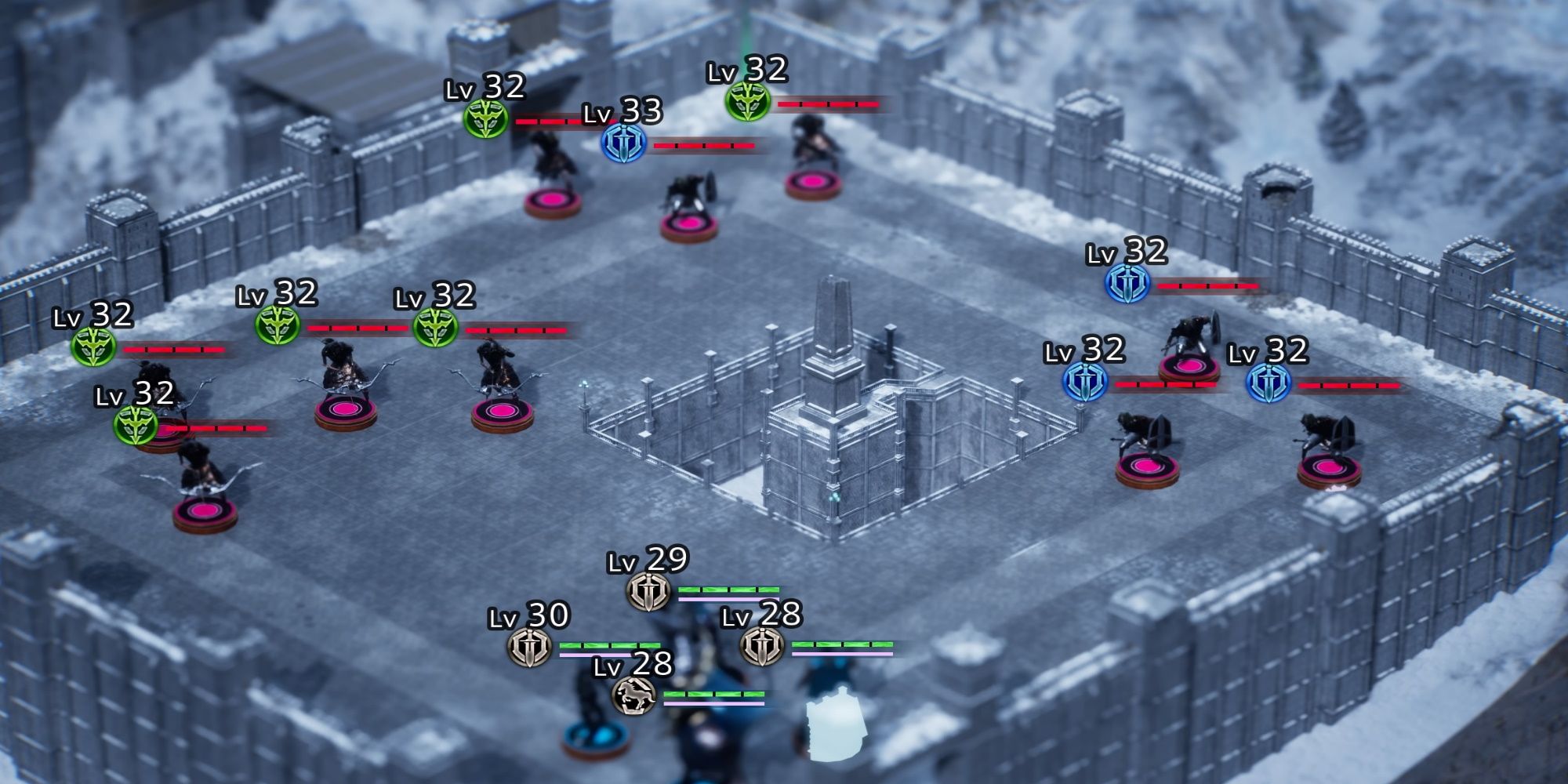 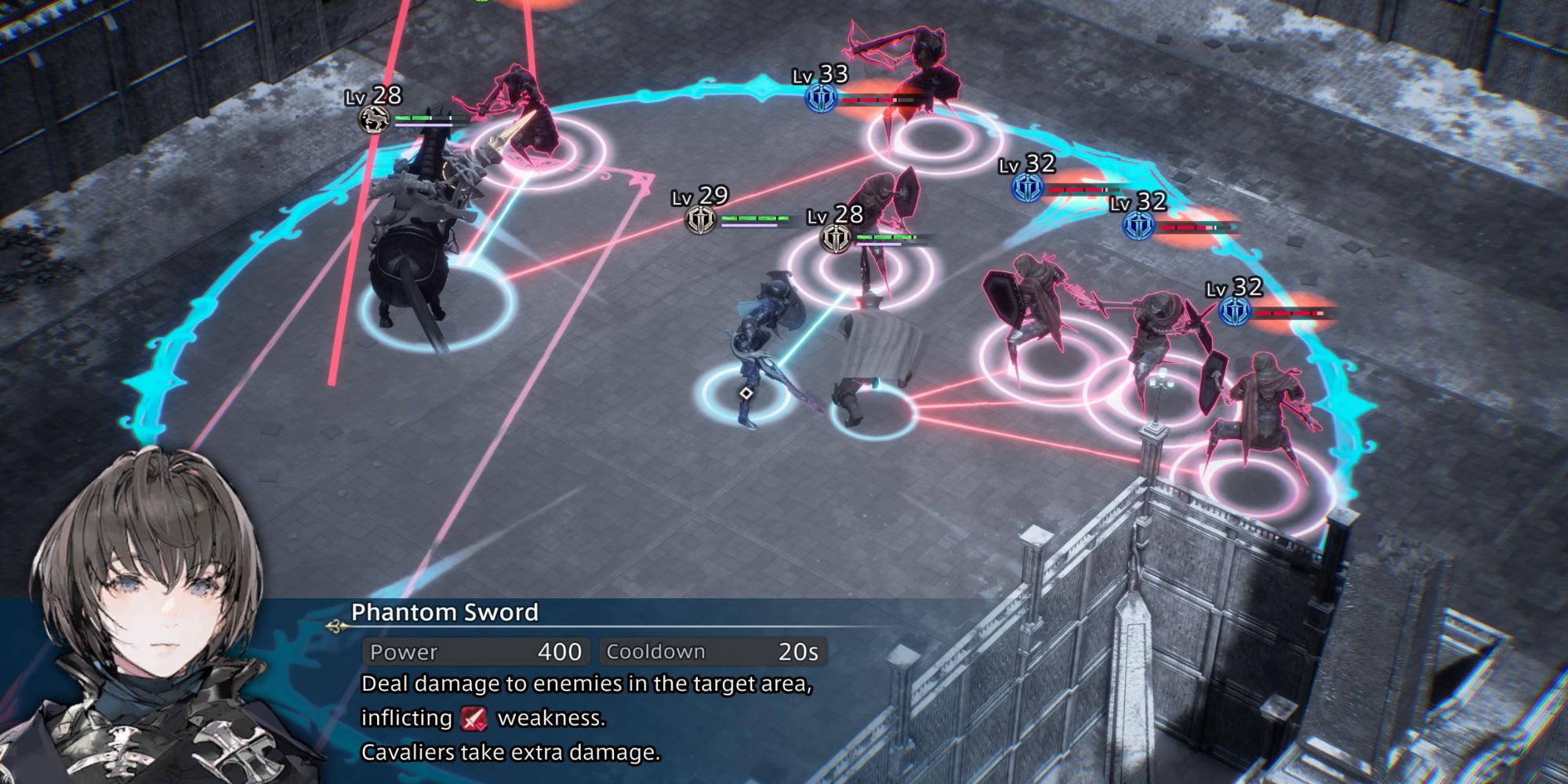 The only two units we think you should make sure you have on hand are a mounted unit of some form, and good ol' Andrias. An overview of your strategy here is to have the mounted unit lead straggling enemies to your troops, while you bombard clustered enemies with AOE spells, and polish off enemies with Andrias' Assassin skills. 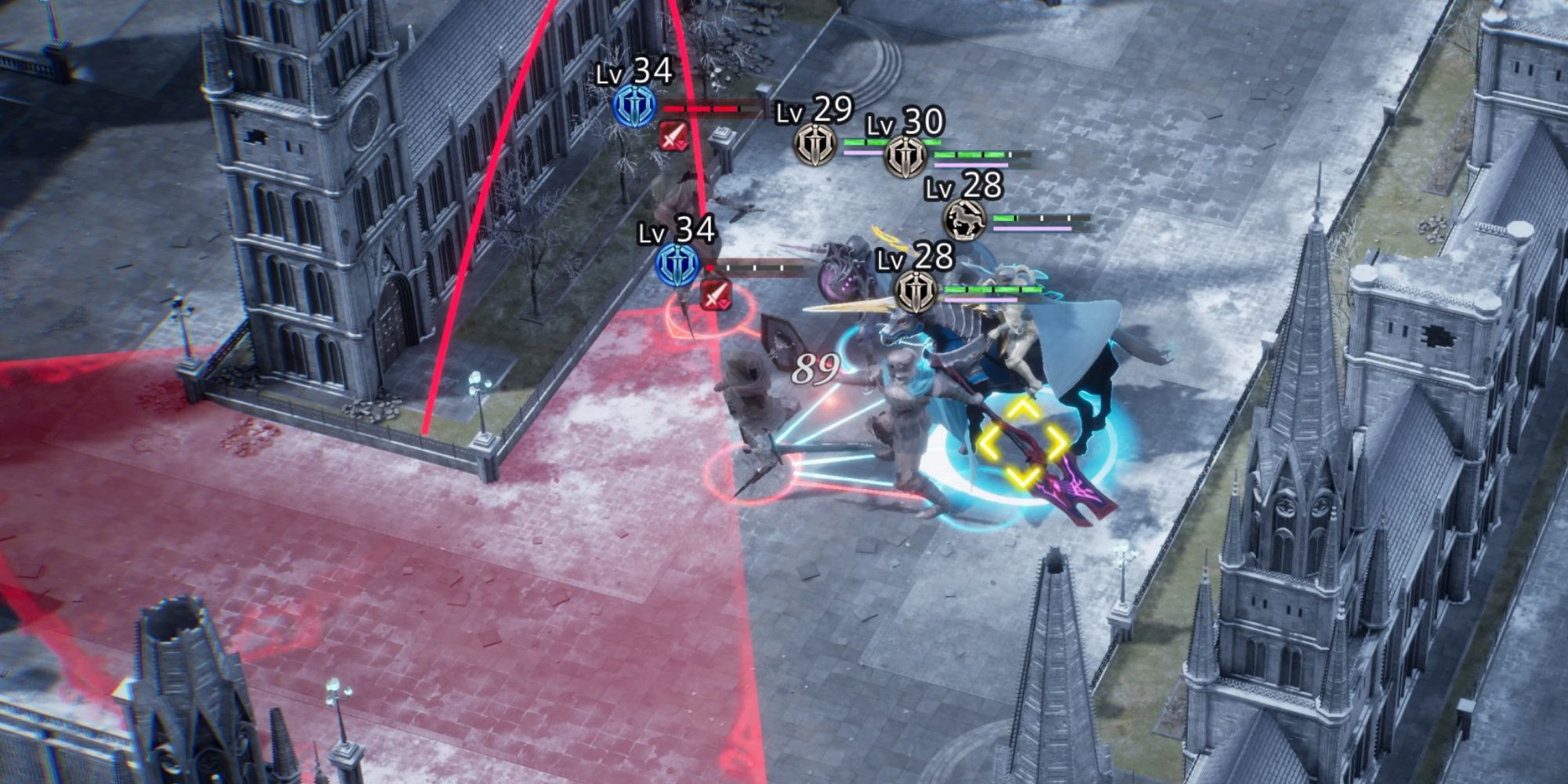 In all honesty, this mission is a bit of a headscratcher given how tight the time was on the previous mission. You are actually given two more minutes to complete "Take Haleg Lyn". Yet, the enemies group more naturally, and there are fewer of them. In the first section, charge your troops towards the group on the left and aim to take out the archers. Have that mounted unit swing past the two other groups and join the rest of your other party members, they will pursue your mounted unit and all cluster together, making them easy to take out with AOE attacks. 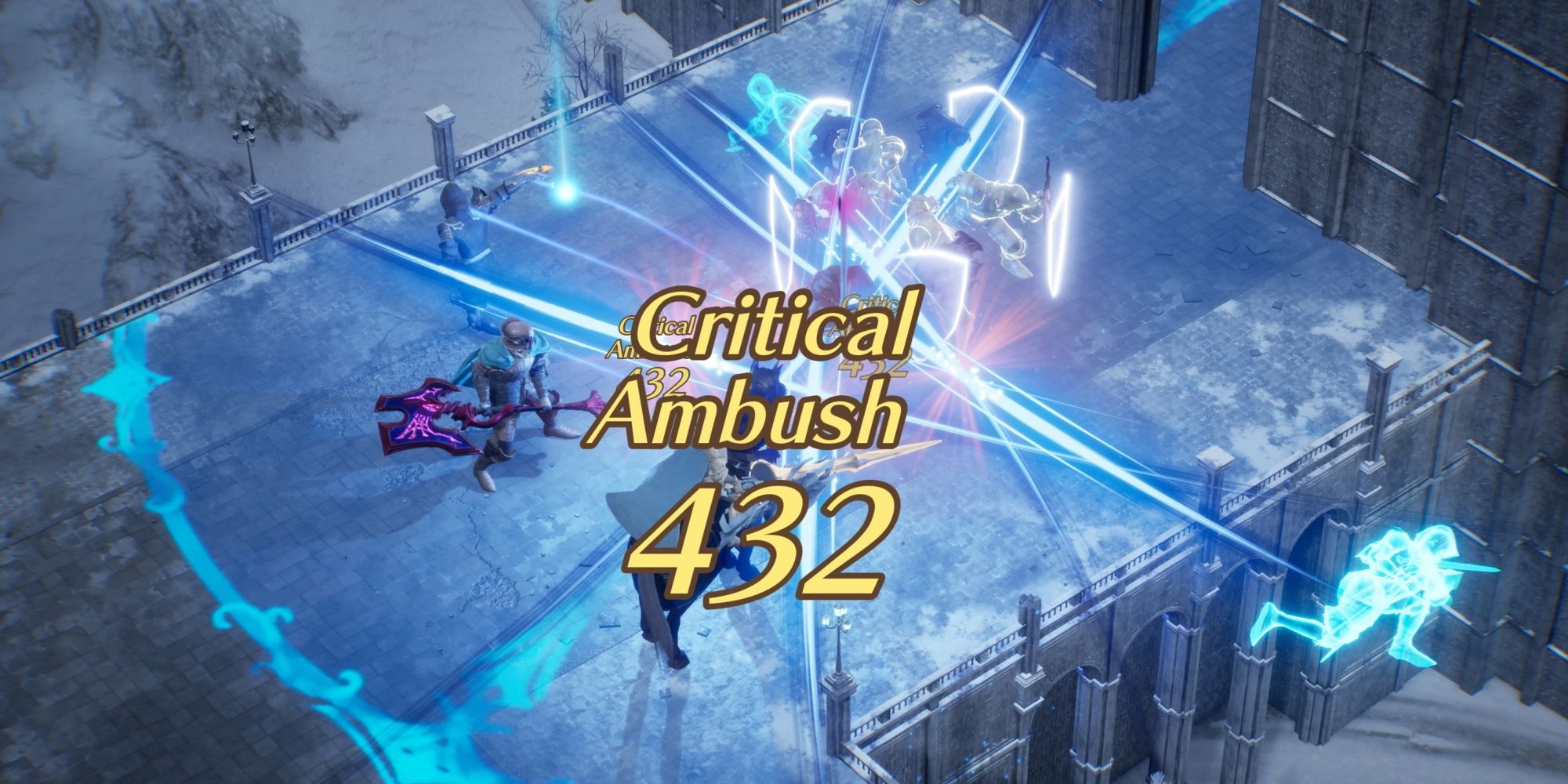 From here on out, it is a linear progression of battles with smaller groups of units. There really isn't a trick to it. Just have your mounted unit grab the out-of-the-way shards, and have lead straggling enemies to your party. Once you get to the very end, there will be five enemy troops. Just unload your summons on them. 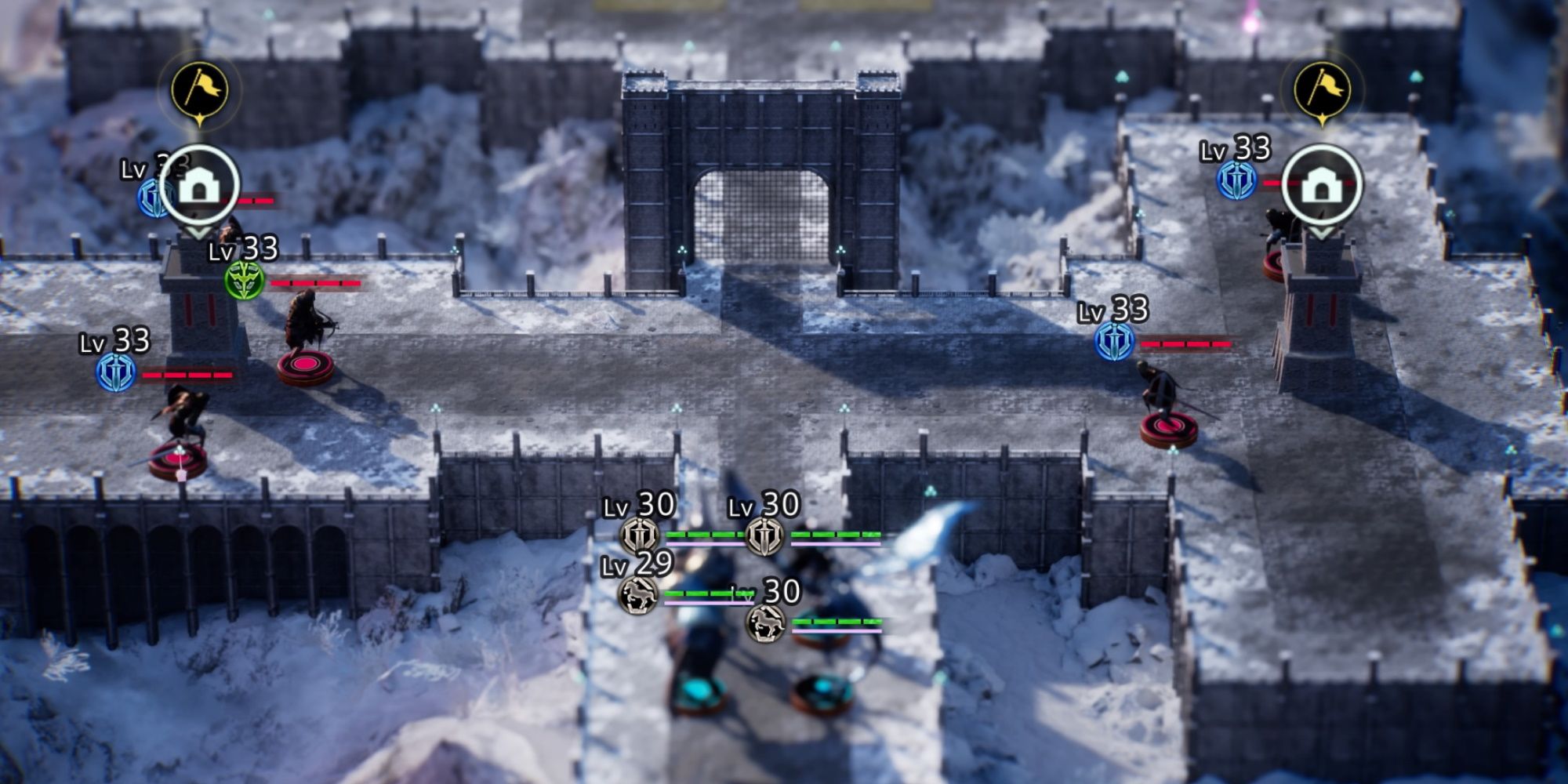 To begin this battle, you are going to send all your troops to the left tower. Except, that is, one of your mounted units; you are going to send them over to the right tower, grab the two Undead Soldiers, and kite them over to the group on the left. Once you have all the baddies assembled, blast them with AOE attacks. Now, take both towers, and progress into the next area. 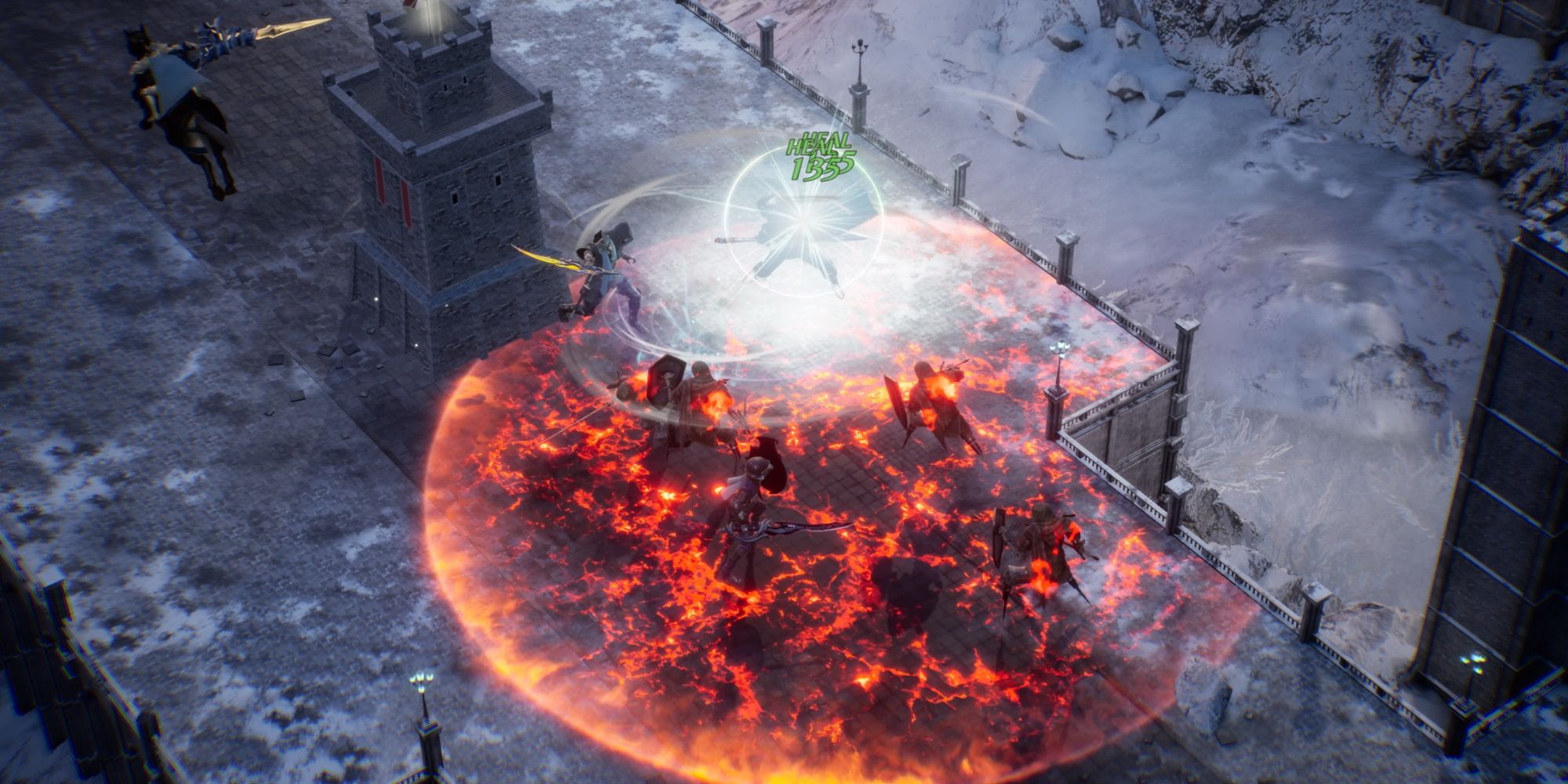 In the second section there are Archers circling the center. What you are going to do is send a mounted unit to the right, and use their Mounted Charge attack to push those archers into the center. You should now be able to hit all the enemies with the bigger AOE attacks. You can repeat this first step on the left (or if you have two mounted units active in your party, you can tackle both sides are the same time). Now, just like in the first phase, you'll hit them with AOE spells. 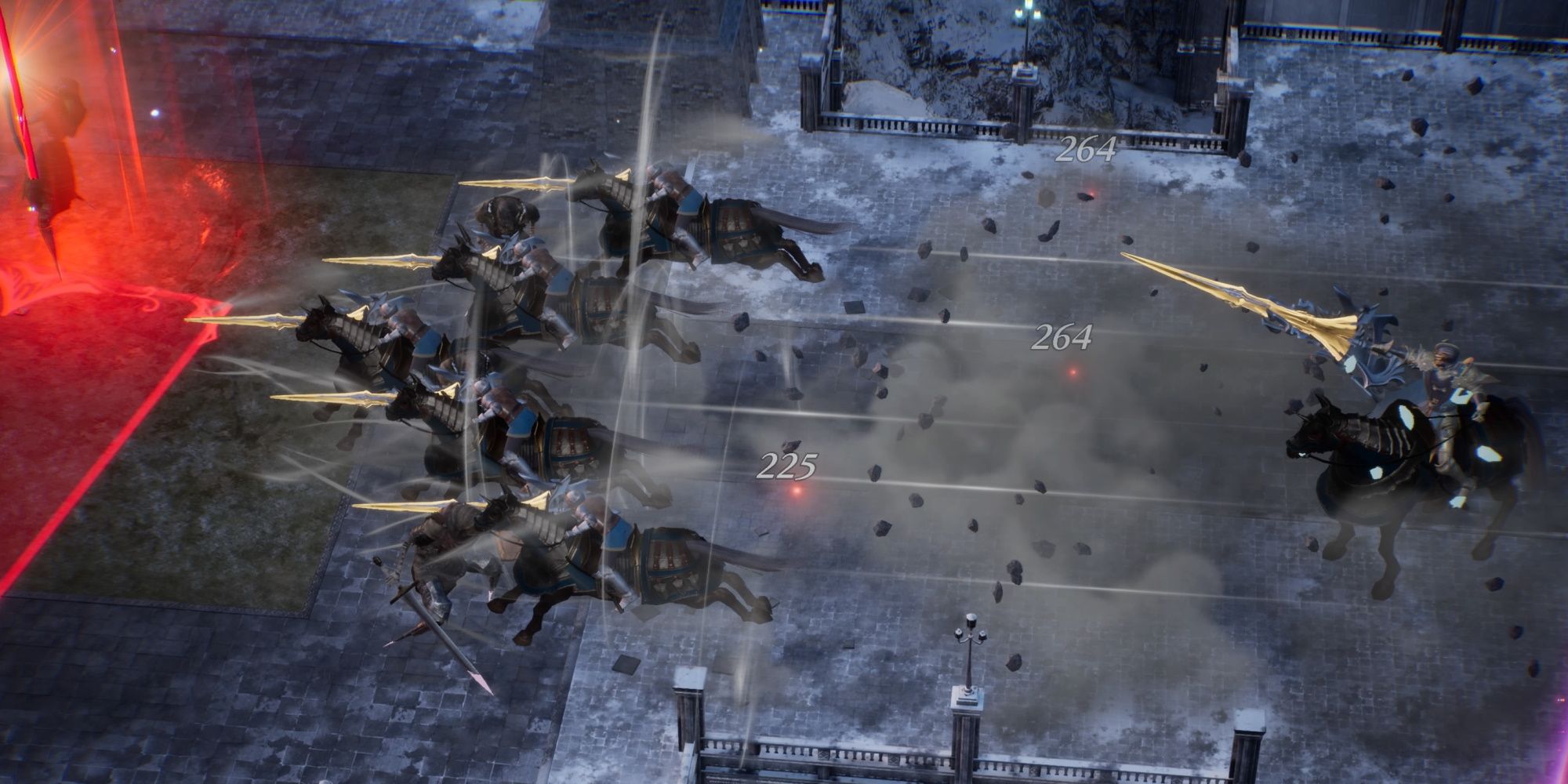 In the final area, push right past the soldiers in front, pull them to the barrier. Hit them (and the barrier) with AOE attacks. Once the barrier falls, advance your army onto the final set of troops (those Soldiers will still be alive, just let them follow you into the next area). Here, you are going to use the Shield Wall ability to draw all the enemy troops in. Then you're going to blast them with AOE spells. Once you are done with the troops, take out Waltaquin, she is surprisingly fragile. 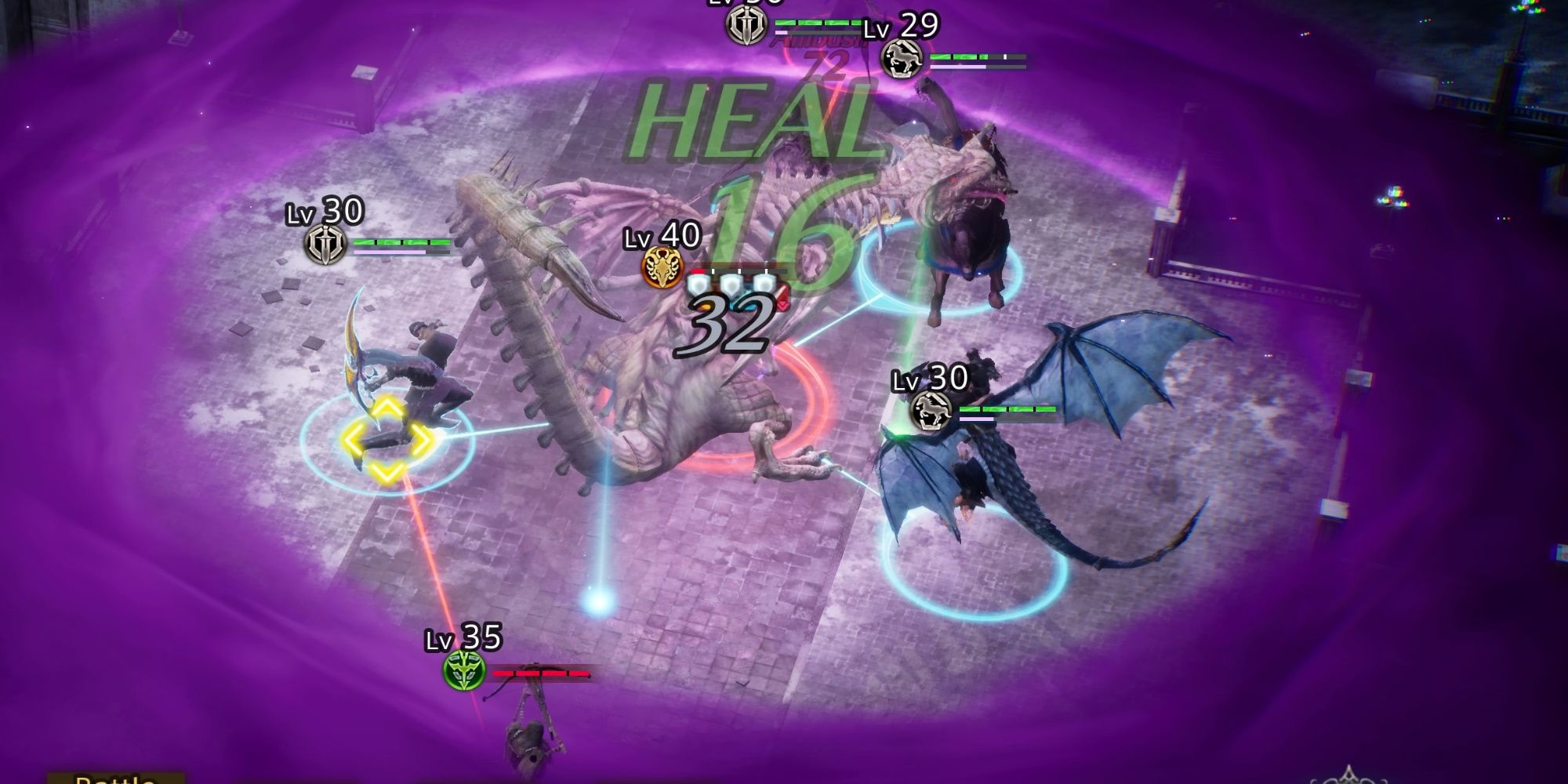 In the final phase you will face off against the Skeletal Dragon. You'll probably want to use your Goldhorne summon to replenish your EP. Hit the dragon with you most damaging attacks (Donovar and Andrias' specialty). Most of the Skeletal Dragon's big attacks are pretty easily dodged. However, if you see a donut shaped pattern appear, stun the dragon before it can complete this attack: this move will summon more Undead Soldiers. With all your heavy hitters teaming up on the Skeletal Dragon, it won't take long for them to fall. Now sit back and enjoy the show.