Though some aspects of The Last of Us appear differently in the trailer of HBO's TV show, much of what you see in the first trailer reflects specific moments from the first game. You might recognize certain characters, level designs, and even gameplay that you’ve experienced while playing through Joel and Ellie’s journey.

Some of these moments are devastating and action-packed, while others are heartwarming. This first trailer will remind you of the very scenes that have made you cry and smile. These are ten moments in the first trailer that you’ll recognize from the game.

10 Left Behind At The Carousel 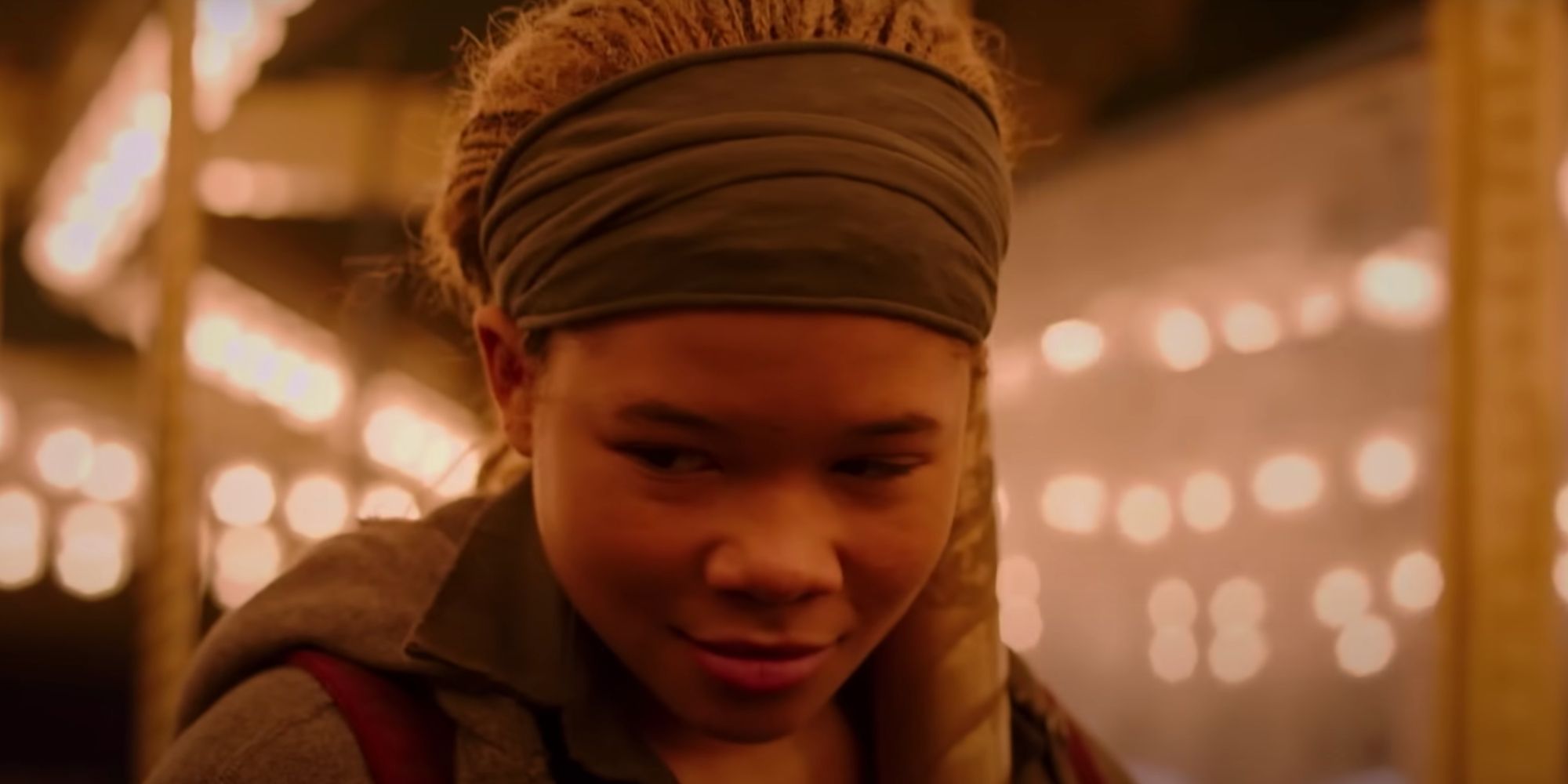 In the Left Behind DLC, Ellie’s infection and her origin story are told while she sneaks around an abandoned mall with her friend and love interest, Riley. One of the main locations in the mall is a carousel, which starts to run once the pair discovers how to turn the electricity on.

In the trailer, Ellie, portrayed by Bella Ramsey, and Riley, portrayed by Storm Reid can be seen enjoying the carousel and exchanging looks in the warm, dim lighting, revealing that the Left Behind story will be told to some extent. 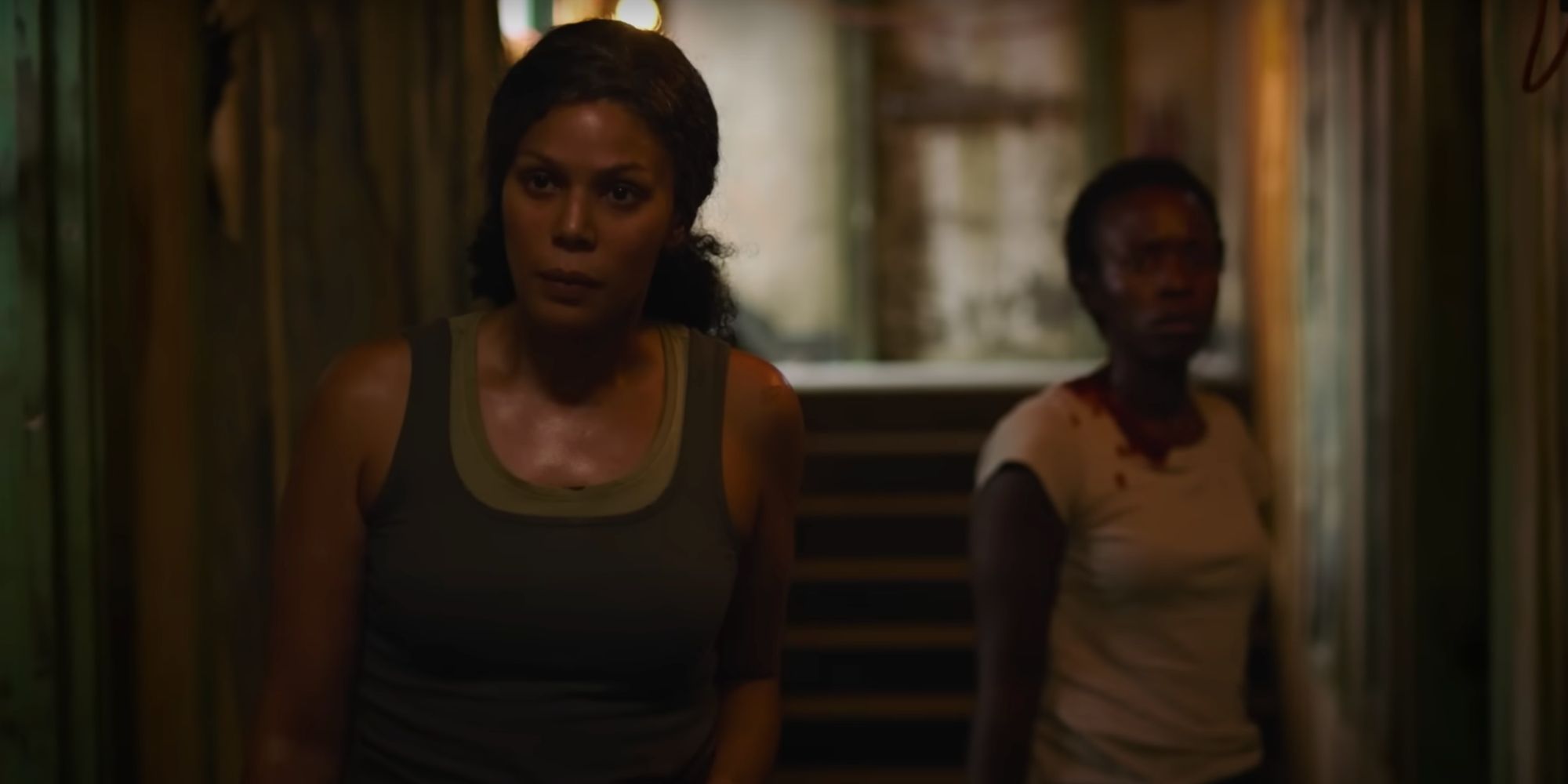 You meet Marlene early in the first game, after an altercation with a smuggler named Robert. Involved in a gun deal with Robert, Marlene is caught up in enemy fire from the military, where she sustains an injury to her abdomen. Joel and Tess eventually cross paths with her and are introduced to a new smuggling arrangement.

Marlene, played by Merle Dandridge, is briefly shown in the trailer, where she holds her hand against her wound. The moment mirrors her meeting Joel and Tess in the game. 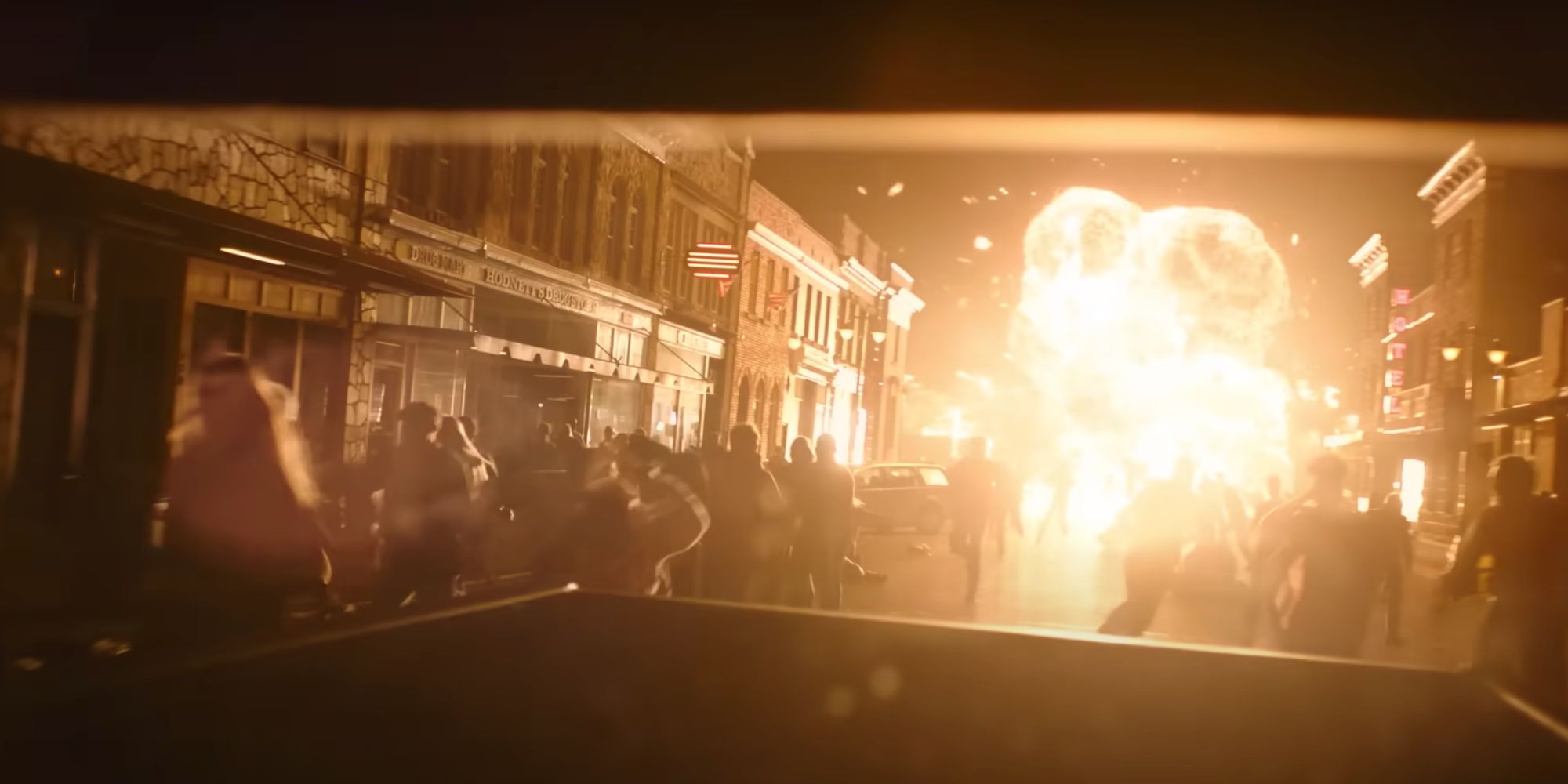 The opening of The Last of Us introduces you to three pivotal characters – Joel, his brother Tommy, and his daughter, Sarah. The trio is portrayed by Pedro Pascal, Gabriel Luna, and Nico Parker.

There are multiple scenes included in the trailer that showcase the events of this night. Joel, Tommy, and Sarah drive through fiery Texas streets while, avoiding people who are newly infected with the Cordyceps virus. Eventually, they leave the car, which is when Joel can be seen running through the streets with Sarah in his arms. 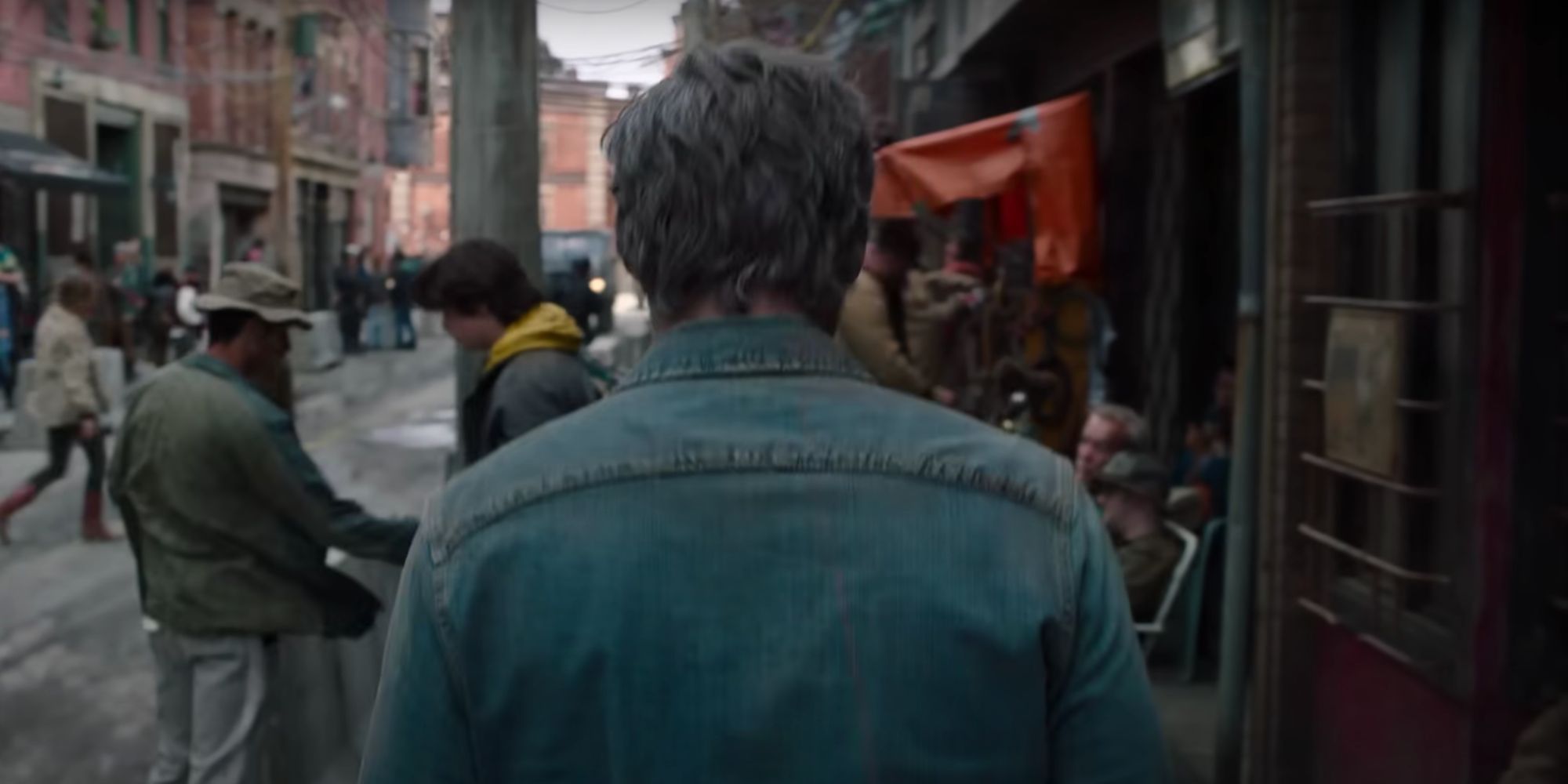 After the tragic events of the game’s opening, there’s a 20-year time jump that shows Joel living in a quarantined, post-apocalyptic Boston. He walks through the quarantine zone, allowing you an inside look at what active quarantine zones look like.

Just like in the game, Joel takes to the city streets, passing by the Fireflies’ symbols on city walls and plenty of information posted regarding the Cordyceps virus. The area is completely under the military's control.

6 Infected In The Museum 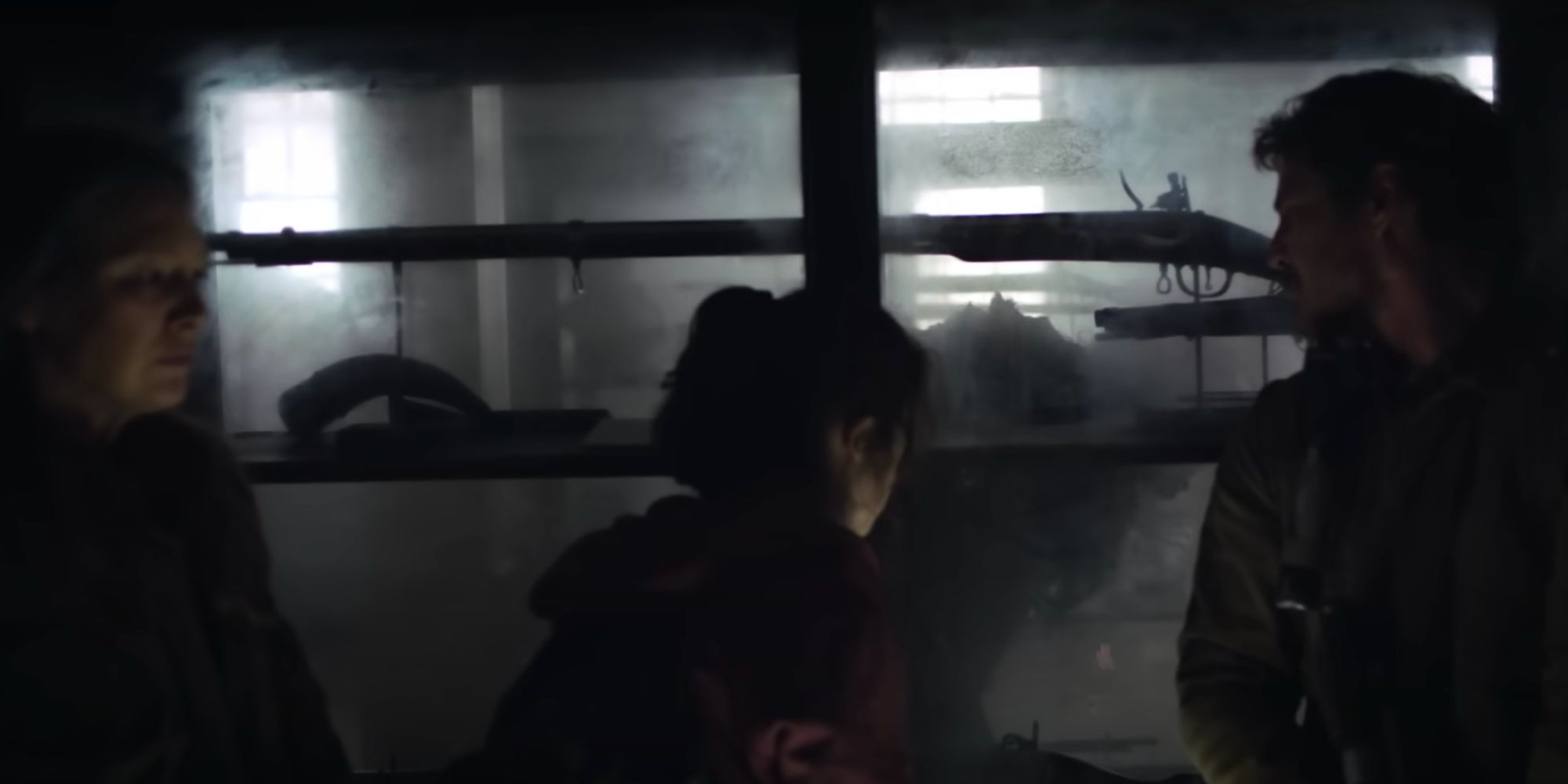 While Joel and Tess transport Ellie, they find themselves in an abandoned museum. This incident is one of the earlier encounters with infected where you’re expected to use stealth to cut through them. The museum is swarming with infected, making it a challenge to get by.

The trailer reveals Joel, Tess, and Ellie standing behind an exhibition case as a Clicker, or possibly a Bloater, lurks around. This clip also signals that the show may be including an important plotpoint regarding Tess, as the museum is a significant setting in the plot. 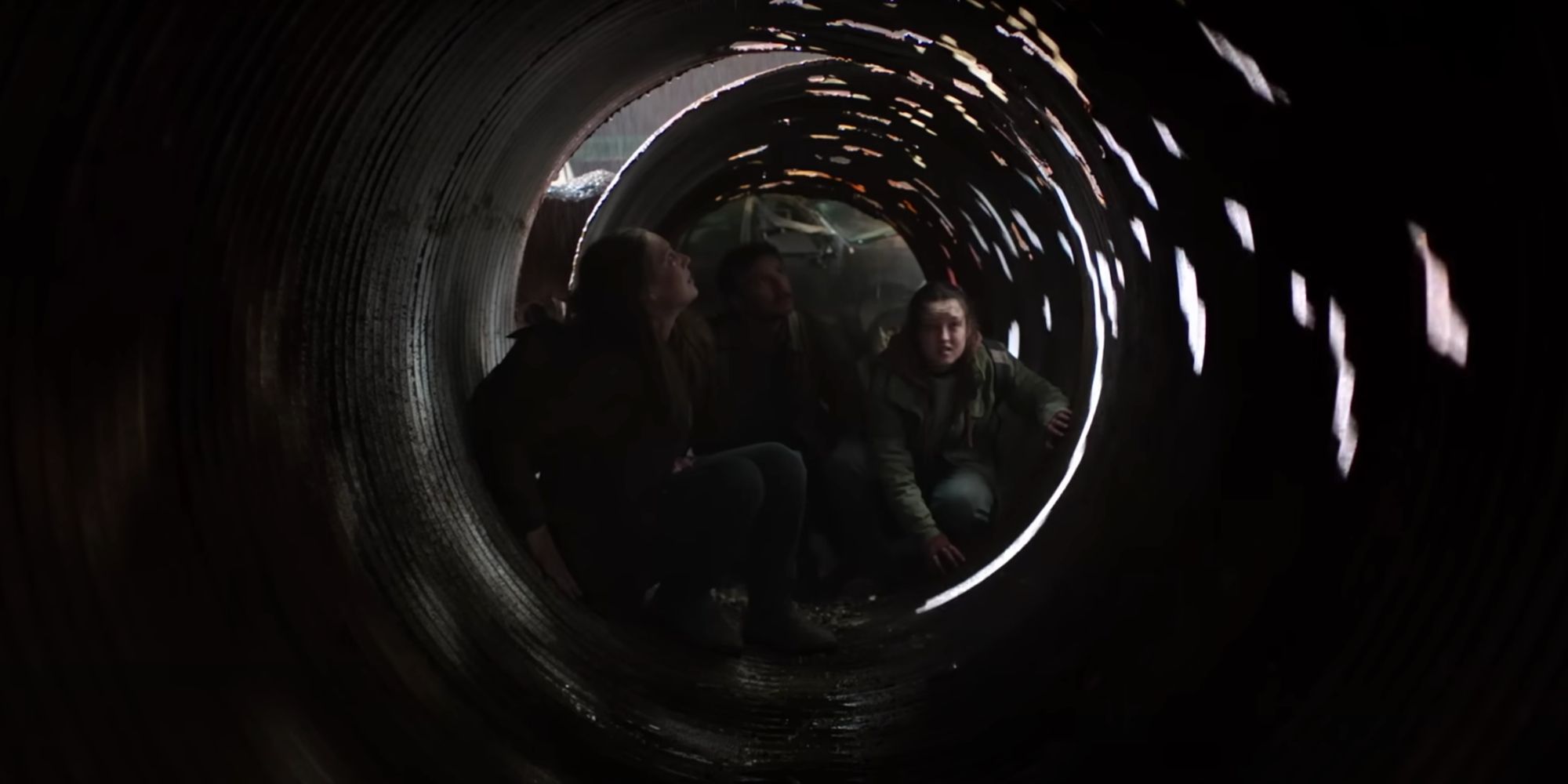 Making it out of Boston is no easy feat, and your exit reveals one of the game’s first turning points. In order to get out of the city, Joel, Ellie, and Tess stealthily make their way through sewer drain tunnels, while the military patrols the area.

The quick scene shows the trio traversing the tunnels while lights, most likely from the military, peek through holes in the wall, which mirrors the military’s lights that shine through grates in the first game. There’s also the familiar sight of a character manning a large spotlight. 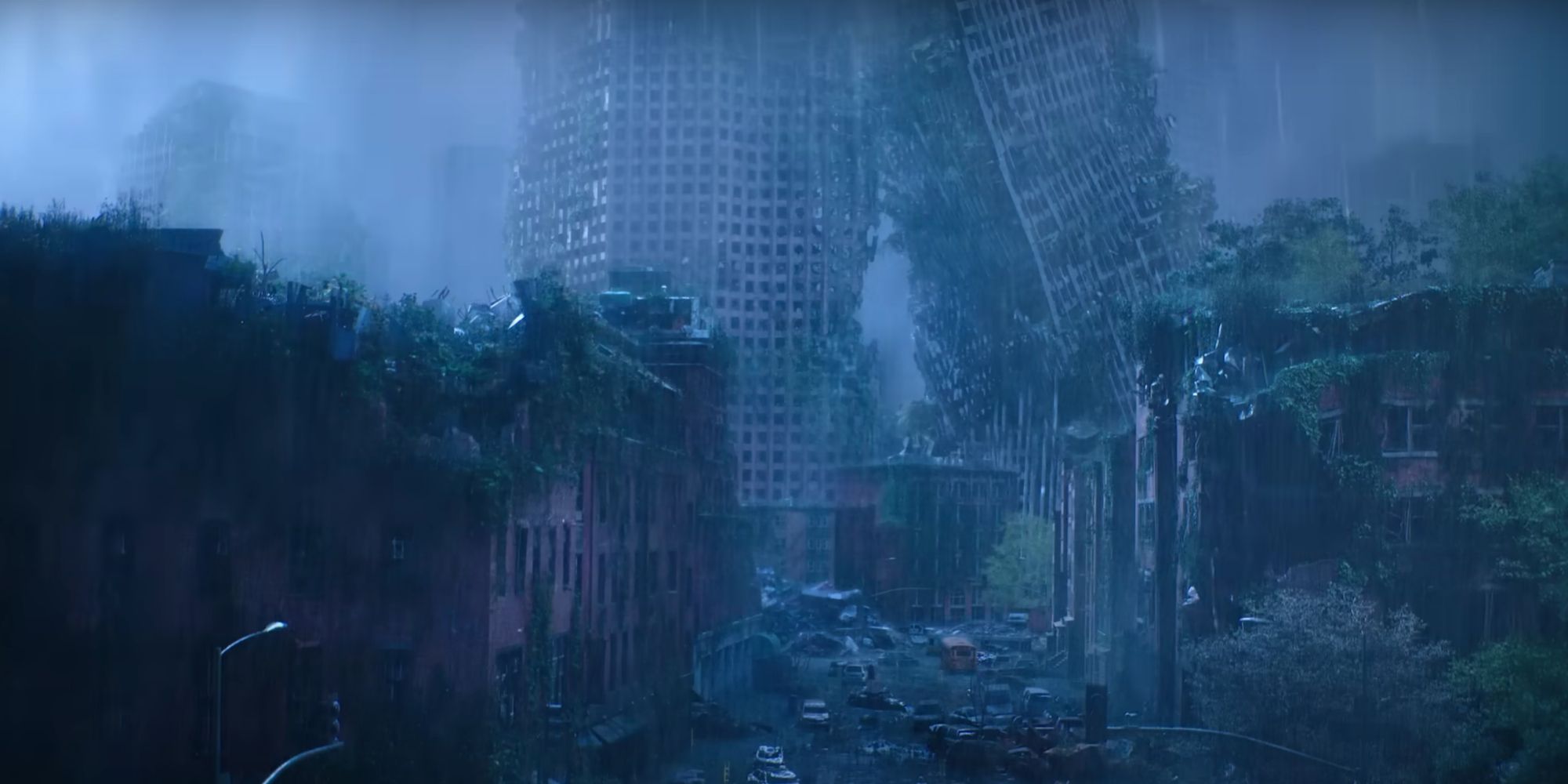 One of the most iconic levels in The Last of Us is in the Outskirts of Boston. Once you officially evade the militant forces near the outside of the zone, you’ll enter a decrepit city, so disheveled that buildings are beginning to fall over. The forecast is a rainstorm while you try to find your way into a building.

This same environment is displayed, rather accurately in the trailer, with lightning illuminating the leaning buildings beyond. The environment is just as striking as it is in the game.

3 Finding Bill In His Town 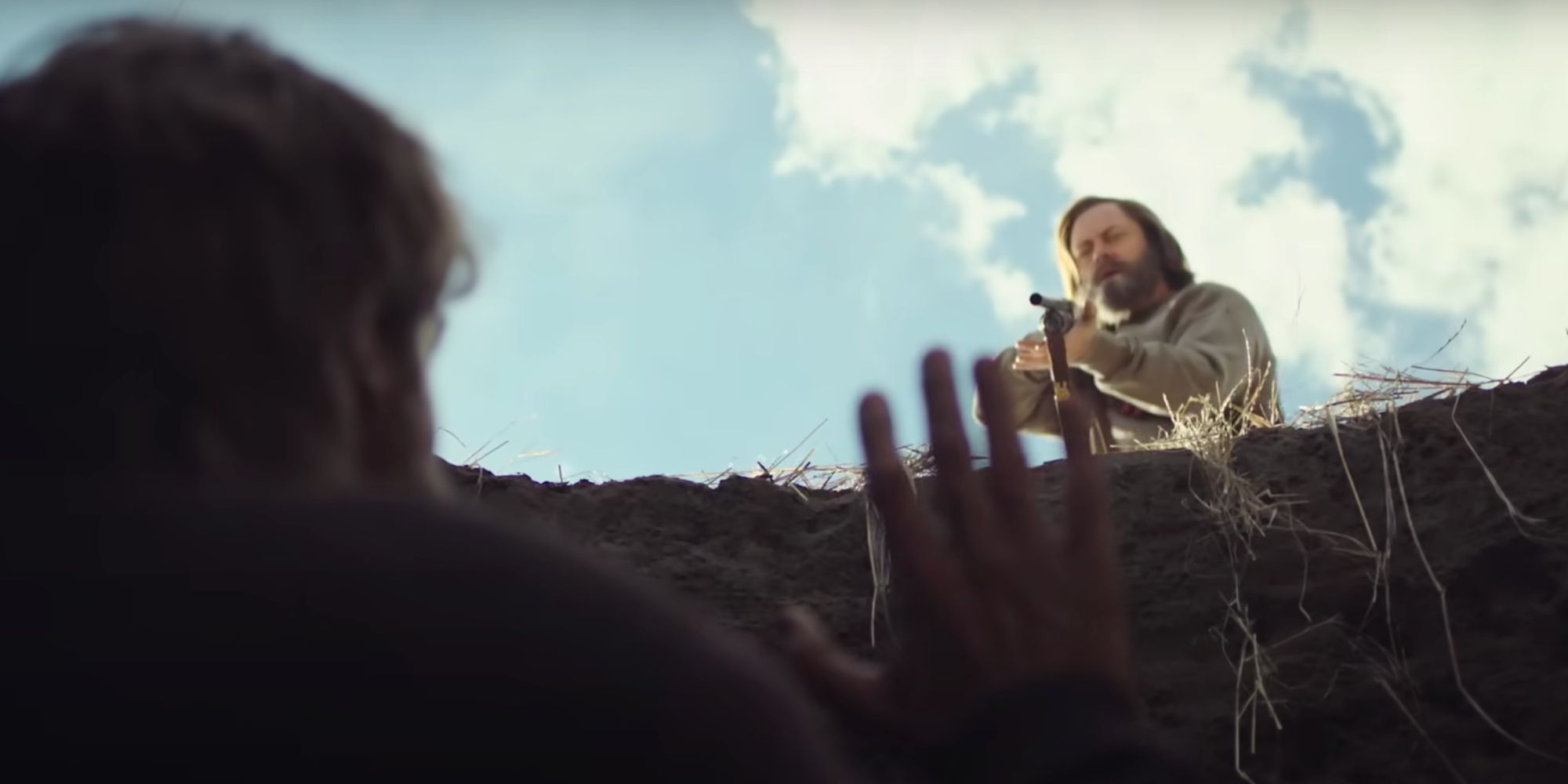 When you meet Bill, portrayed by Nick Offerman in the show, you’ve just been cut down from a trap that held you upside down while being attacked by infected. At this point, Joel is being pinned down by an infected person. Thankfully, Bill comes in and helps him.

It’s unclear whether Joel and Ellie will encounter Bill this way in the show, but similar scenes are shown in the trailer that suggests a comparable scene will be included as Bill and Joel make uneasy eye contact with each other in what appears to be a trap. 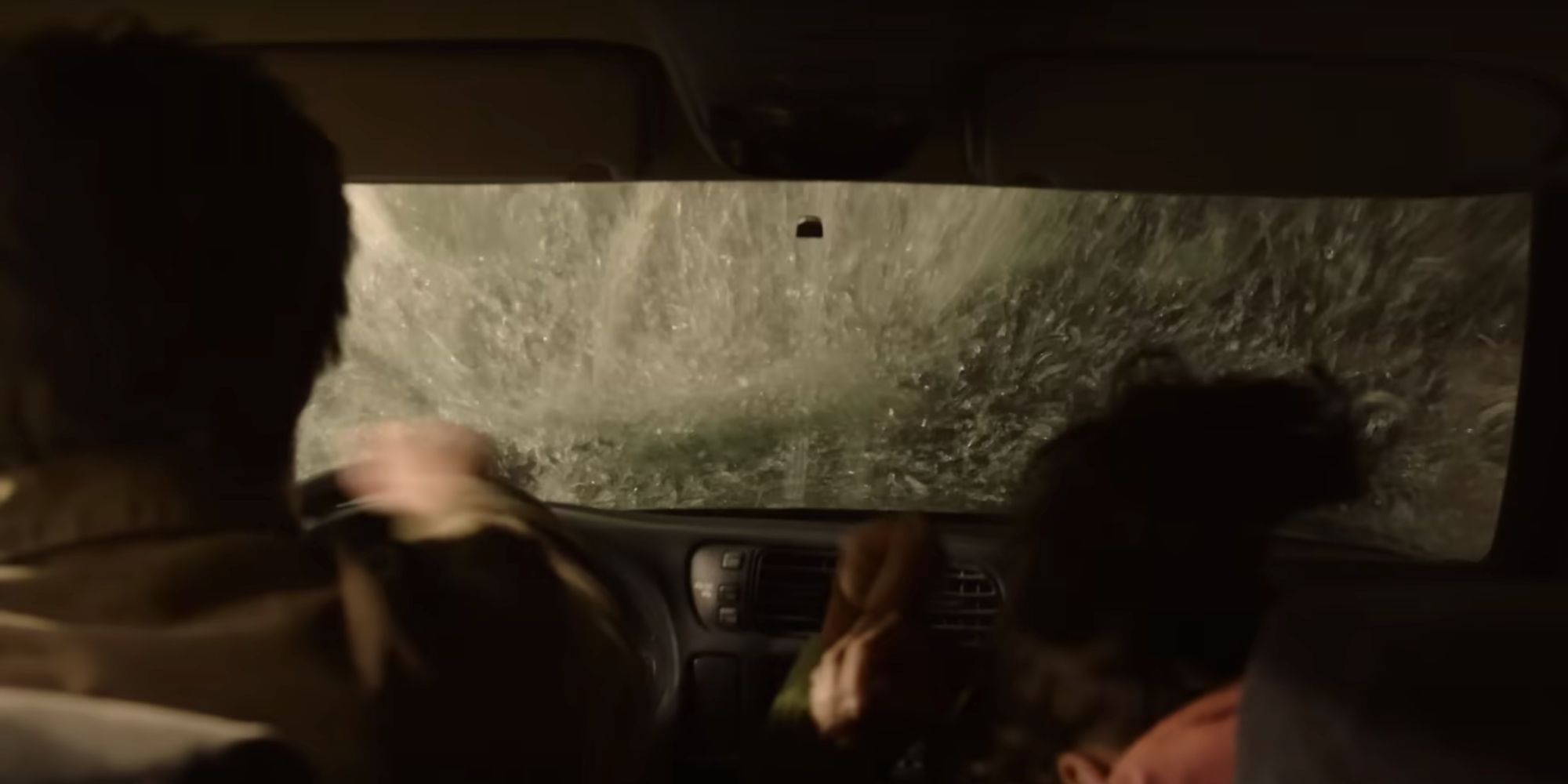 After leaving Bill, Joel and Ellie drive a pickup truck toward Pittsburgh to continue on their journey. Their arrival is intense, as Hunters attack the vehicle, sending a bus barreling into the side of the truck, causing it to crash through a shop.

In the trailer, you can see Ellie and Joel crash the car with the windshield shattering in front of them. It’s only a second-long at most, but you can see they’re crashing through a building. 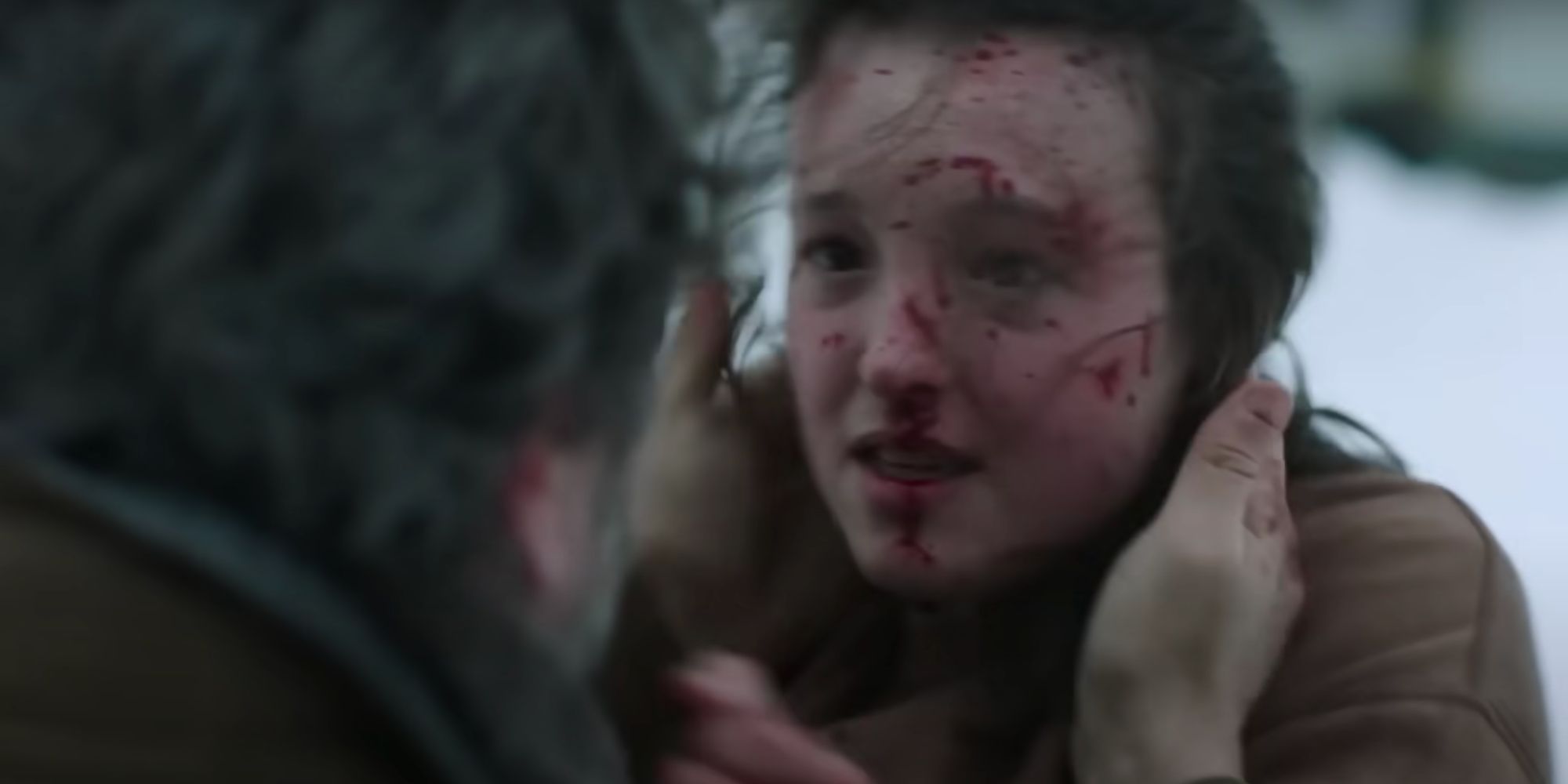 During one of the more serious moments in the game, Joel comforts a traumatized Ellie. He holds her while she cries with a face covered in blood before they inevitably leave the snowy area.

A similar scene is shown in the trailer, as Ellie, distressed and with blood on her face is being embraced by Joel. Though they aren’t in the building they’re in during the original scene, the snowy environment and nearly identical image suggest they could be the same.