The Legend of Zelda series chronicles the ongoing epic tale of Link, a silent hero, Zelda, a noble princess, and Ganon, the Demon King. On the surface, it's a classic magical adventure story. Just beneath the surface, though, is an undercurrent deific mythos. After all, Link is the "chosen hero," and someone had to choose him, right?

That's where the goddesses come in. Well, one in particular, but to understand her story, it's best to explain a few others, too. Unlike the leading trio of characters who reappear in every entry across the series as a different iteration of themselves (reincarnation is a messy mistress), these goddesses, which are referenced almost everywhere, are the same entities in every single instance, so even though their stories began far earlier in the timeline, they're infinitely easier to explain.

A quick aside before we dive into the tale. Yes, there are a number of minor gods that appear in the Legend of Zelda series, like the fierce being locked inside a mask that gives Link a rad paint job, the rickety wooden giant that's got a weird thing for horses, and a trio of dragons better suited to using a La-Z-Boy than to flight, but there are only four truly important deities in the wider canon. Here's the story of the Hylia and the Golden Goddesses. 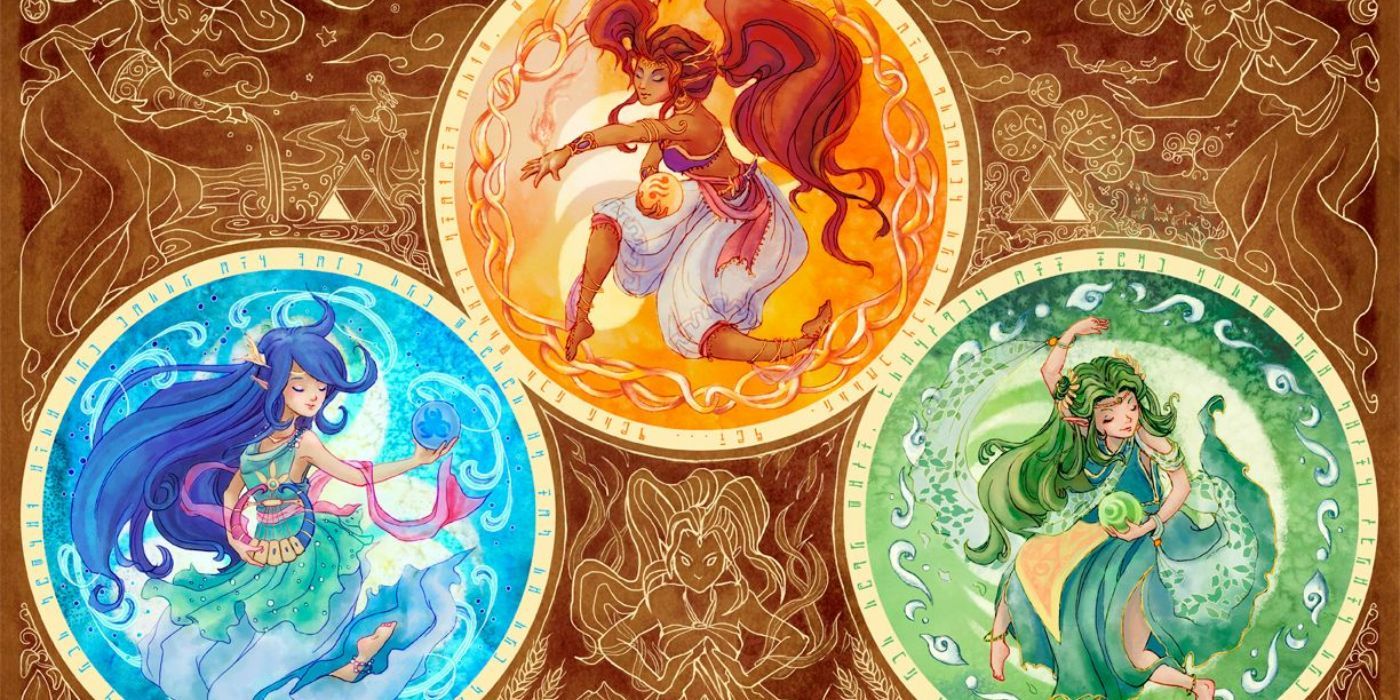 In the beginning, there was chaos. Shapeless and shadowy, chaos ruled all, at least as far as nothing can rule nothing. Don't think about it too hard, otherwise it stops making sense. As old as this substance, and possibly older still, are the Golden Goddesses, a trio of immortal, omnipotent beings. Little is known of them other than that they were, they are, and that they always will be.

For reasons known only to themselves, the goddesses Din, Nayru, and Farore chose to descend into the chaos and create something from within its confines. From their choice came a world, one whose name is not known to us, though it is akin to our Earth. Like any good team, each member of the golden trio possessed their own skillsets, and so it was that they divided the task of creation amongst themselves.

Din, The Goddess Of Power

First, there is Din, the goddess of power. Her power, though undefined in nature, shaped the chaos into physical form. She shaped the mountains and positioned the shorelines. She dug the canyons and flattened the plains. She created the world as it would come to be known although, were it only her powers in play, the world would have been devoid of many key facets.

Nayru, The Goddess Of Wisdom

Then, there is Nayru, the goddess of wisdom. It is said that her mind gave meaning to the world. Her counsel gave life to the spirit of law and order, morality and thought. How she accomplished this is unclear, as her work dabbled seemingly and exclusively in the conceptual, but it's possible that the wording "spirit" was intentional, and that she literally created a mindful spirit aura that blanketed the whole of creation.

Farore, The Goddess Of Courage

Lastly, there is Farore, the goddess of courage. According to legends, with the richness of her soul, she gave birth (metaphorically, probably) to living things. The parameters of this are, much like most of The Legend of Zelda lore, undefined. It's clear that the sentient races such as humanity, the Zora, the Gorons, and the Rito are hers, but it's highly probable that also the plants and the animals are hers, as well – as it is said, all living things. No official word as to how this satisfactorily correlates to the concept of courage. Take that as you will. 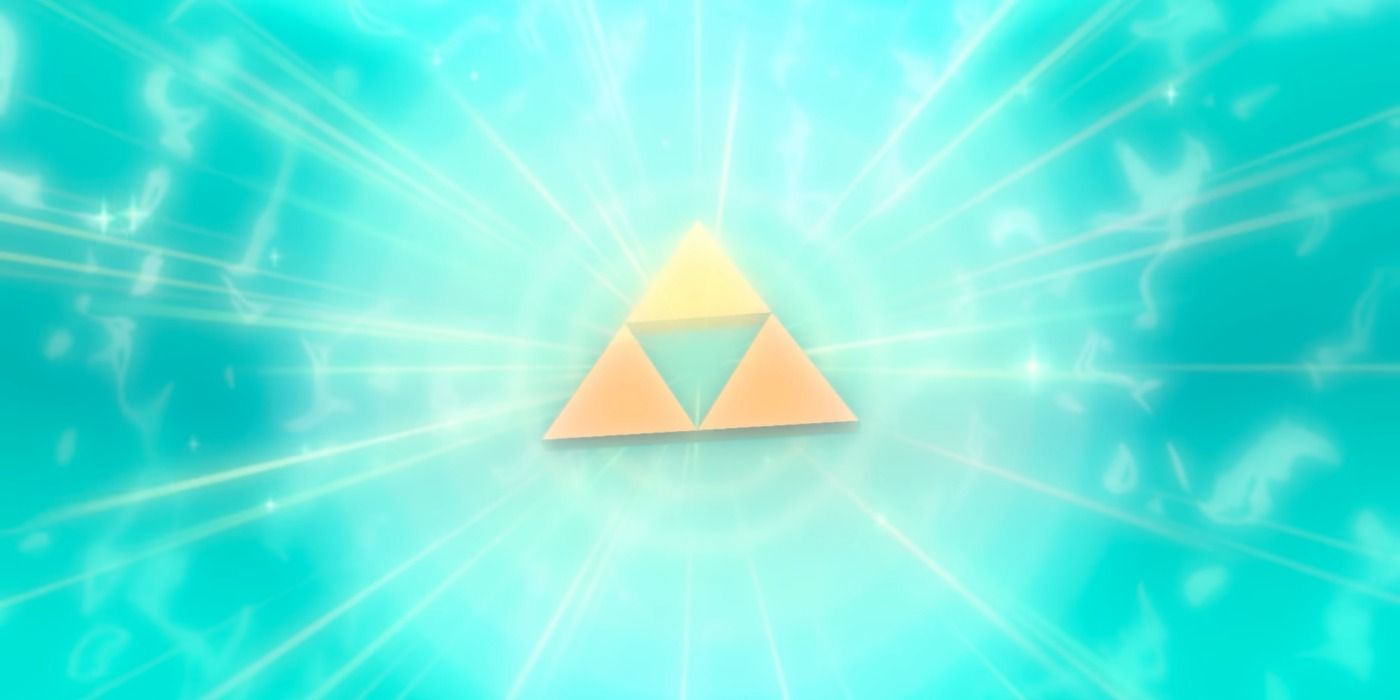 For reasons as unknowable as ever, the Golden Goddesses chose to leave their creation behind. In their place, they left the Triforce, an intensely powerful, magical artifact that held a fraction of their powers. It was designed so that each of the Triforce's three main pieces – one created by each goddess – could be operated separately or in conjunction with each other. It was also designed so that only a mortal could wield it, thereby excluding beings of a certain level of power and authority from using it.

It is… unclear why the Golden Goddesses chose to create a magical weapon of mass destruction and then dip, but they did. Listen, most, if not all, of the actions taken by deities in this story are taken for unknown reasons. Attempting to dissect them only leads to a headache. Fortunately, they left both their world and the Triforce with a protector. That being said… they still left it. 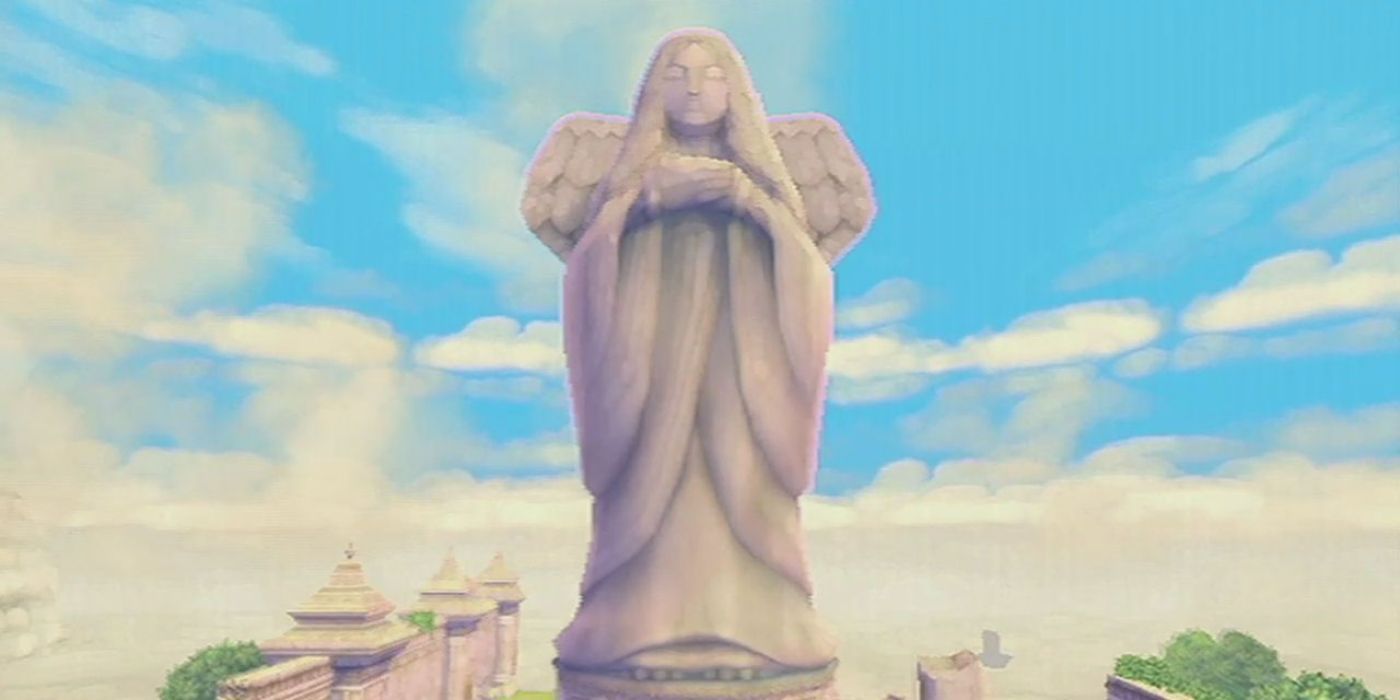 The Golden Goddesses left all of their creations under the protection of the goddess Hylia. Unlike Din, Nayru, and Farore, Hylia is not the goddess of anything in particular. It's best to simply say she was a guardian goddess, who came prepackaged with the appropriately named Goddess Sword. It's also important to note that, unlike the Golden Goddesses, we've switched to past tense verbiage for Hylia. After all, this entire tale predates the game series, and there's no such thing as a backstory without a little tragedy.

Hylia's job as the planetary security guard was immediately thrown in danger by Demise, the Demon King who lusted after the power of the Triforce. He sought to take it by force, and so he brought into creation with him a swarm of monsters. It's believed that these monsters are the progenitors to most of the creatures seen in The Legend Of Zelda series. Demise destroyed everything in his path. Hylia, to her credit, assembled Farore's sentient races to fight the armies of the Demon King. Ultimately, all life took a heavy toll, including Hylia herself, but the goddess managed to seal Demise in a magical prison.

In a manga of questionable canonicity, a courageous soldier in Hylia's army fell from his wounds. Grieved by his loss, the goddess blessed his soul so that it would always find its way back to the mortal plane. Yes, dear reader, this is intended to be the true first incarnation of Link, the goddess' chosen hero. Later, in Skyward Sword, Demise would tell another iteration of Link that he would also always return to plague the earth, thus creating the cycle of villains most commonly referred to as Ganon. There is yet a third explanation for why Zelda comes back. Don't worry, we're almost there.

Hylia knew that her prison would not hold Demise forever. In response to this realization, Hylia laid the intricate groundwork for a convoluted plan. First, she created a spirit named Fi and housed her within the Goddess Sword so that she could always find a worthy hero to wield her and, secondly, relinquished her power and immortality. She chose to do this so that she could don a mortal form, a form that could wield the Triforce to protect the world she so dearly loved. While the form varied, depending on the reincarnation (a leftover gift from her days as a deity), she always bore the same name. The goddess Hylia became Zelda. This more than anything else explains the title of the series because the stories are all, truly, the legend of Zelda.