“Always forgive your enemies; nothing annoys them so much.” So said Oscar Wilde, and the quote also popped up in the corner of my loading screen as I turned on The Pegasus Expedition for the first time. I made a mental note to keep it in mind as I prepared to engage in a galactic war to conquer and colonise an entire universe, but by the end of my time with this 4X strategy game, it was I who was asking forgiveness.

Things started well enough, with the demo catapulting me some 25 turns in. I found myself at the head of an established space colony, spanning multiple systems and around a third of the known galaxy. Half remained unexplored, but my allies secured my borders, and things looked well. That was until I was made aware of a war. The war was over – it wasn’t clear whether you play through it in the full game or it just happens – but despite my forces winning, things hadn’t gone to plan. We’d accidentally killed the opposing Empress instead of capturing her, and many of our own troops had been caught in the planet-leveling blast. Despite the huge hole we’d made in the planet’s crust, I was free to begin colonising it.

I was immediately thrown into making some decisions with my advisors. You know the situation: the pragmatic scientist, the level-headed diplomat, the racist war officer. I was thrown in at the deep end with little context, so I was quite relieved when every option I selected seemed to point me towards the same outcome. If this were a full playthrough, I’d be less impressed.

A few prompts taught me how to settle planets, and I built some research facilities and military bases on various moons. This aspect of the game, the colonisation, is far more in-depth than I imagined. As you build each base, you can not only select whether it should focus on upgrading your army, increasing your population, researching sciences, or mining for materials, but also what specific buildings your minions should erect in each outpost. Take into account each planet’s atmosphere and chemical make-up, and then decide whether you need the standard shipyards and spaceports, or instead opt for a Personal Wellness Center or Antimatter Research Supercomplex (abbreviated to ARS, lol).

However, once you’ve selected what should be built, you can’t change your mind without starting the colony over. This is especially frustrating in the early stages of the game when you’re still figuring out what you need and where you need it, and that frustration is compounded in a demo when your opponents are also 25 turns deep and have entire space fleets hovering on your doorstep.

If that was frustrating, the AI was even worse. One time, one of my allies suddenly decided to hate me. We’d been a 99 percent strong alliance the turn before, and now there were only four percentile points holding us together. Why? I haven’t the foggiest idea. This wasn’t the worst offender of weird AI situations, however. I’d made an alliance with the rapidly expanding House of Inoa in my first few turns, but their expansion had grown so much they now controlled the target of my main mission. I was meant to beat the system of Hanoar – the jewel of the Hanoar Clique’s empire – into submission, but Inoa had got there first. And now I had to declare war on my powerful allies to complete my mission. Reader, I didn't even make it to Hanoar. 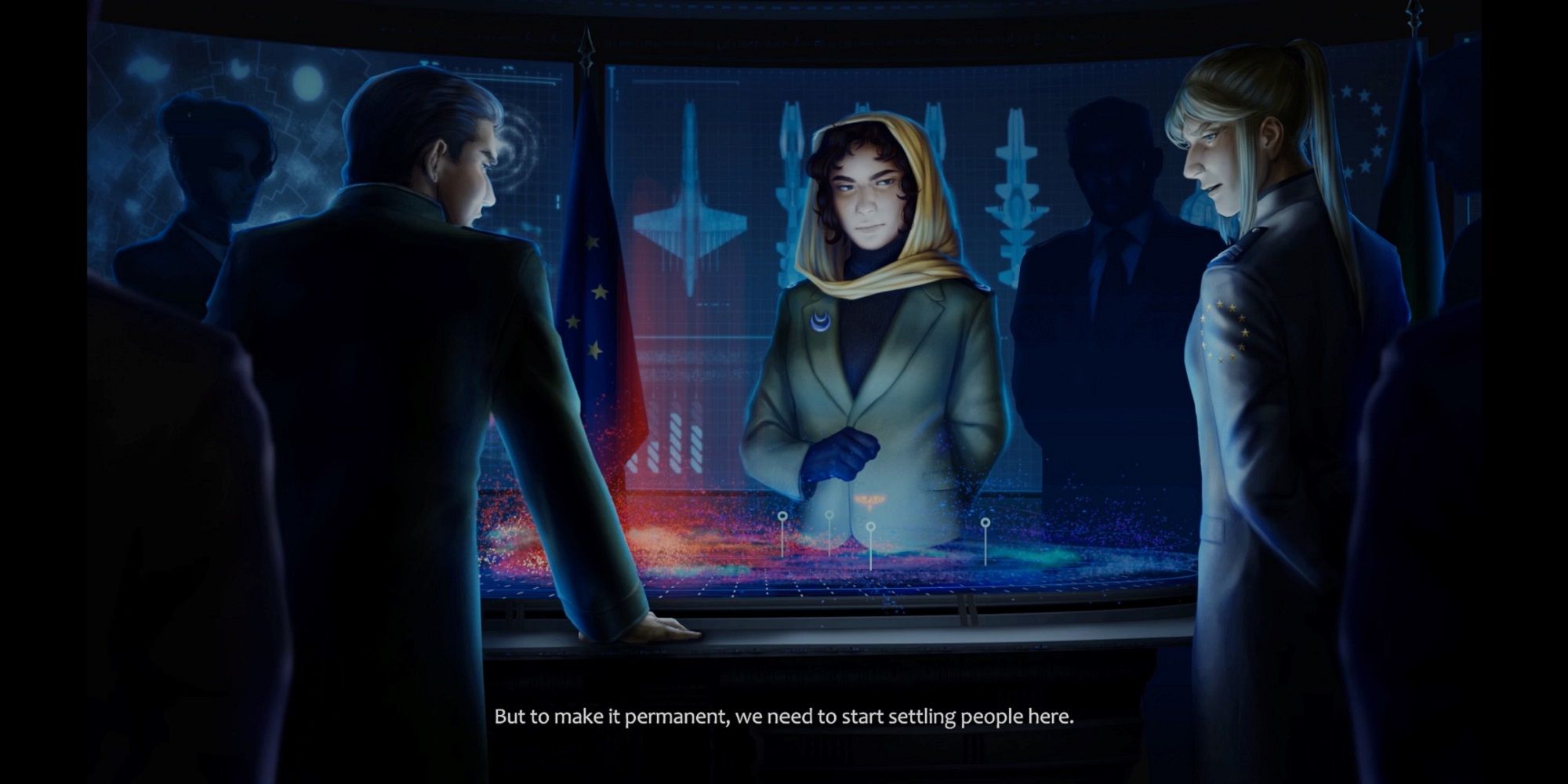 Inoa destroyed my force intended for Hanoar and sent vast armies down the flanks of my empire, cutting swathes of the galaxy down and reducing my systems to a handful of fragmented planets. What’s more, I don’t remember being told that ships being repaired can’t fight back. It makes thematic sense, but it would have been nice to know before Inoa took out my three strongest armies, suffering no casualties in return. Maybe this kind of thing will be sorted in a tutorial for the main game, but the demo could use some more instruction.

Combat is fun, though, when it works. I enjoyed picking from a selection of tactical formations – although I usually went with Lightning Strike, which seems most effective – but attacking is more fun than defending. During battles, you can zoom right in on your little ships firing lasers and zipping through portals, or take a backseat and watch the systems burn at your feet. Speed it up, slow it down, you’re in control. I don’t see the point in the real-time button prompts that launch missile swarms or specialist weapons, though. 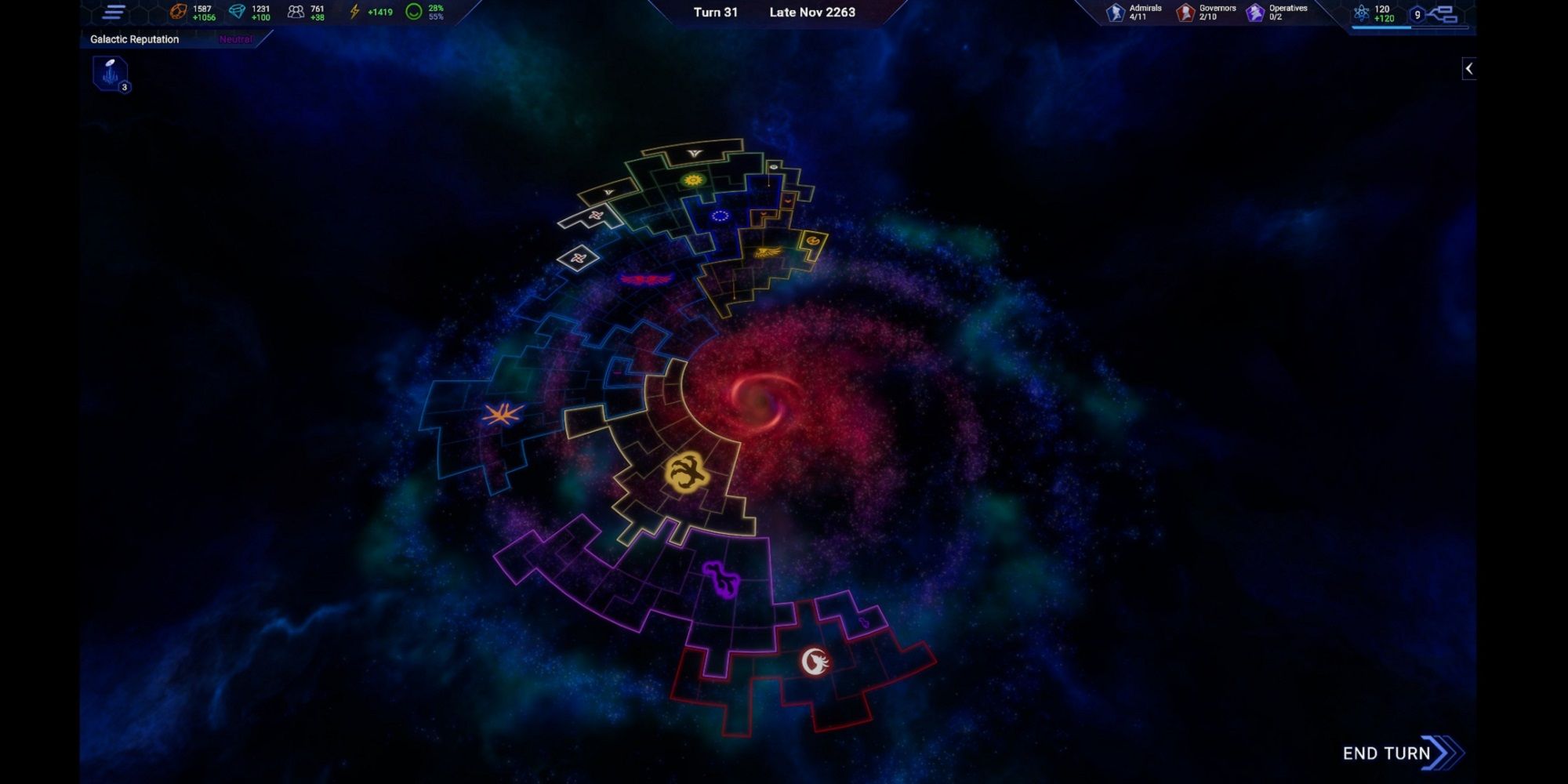 I would have liked to have spent more time testing out the reputation meter, and seeing how people treated me differently if I swung too far towards Nemesis, or if my firepower would be nerfed when I bounced back towards Diplomat.

The other disappointment was in my advisors. Like I mentioned before, they all follow the generic tropes, but they’re also all human, which is really boring. The Hanoar Clique I was warring with are a race of Rito-like bird people, and I was approached by alien robots who had once been biological creatures but had surpassed the need for such weak bodies. Why can’t these be my advisors, why am I stuck with a space racist who thinks all other species are a threat to be torched with plasma? I suppose that comes with the colonisation.

I enjoyed my time with The Pegasus Expedition, despite its flaws. It’s too easy to make unalterable mistakes when you’re dropped into the middle of such a complex game, but it’s nothing a robust tutorial can’t fix. Most of your fun will come from the space battles and moon colonies, but comparisons to genre heavyweights like Stellaris will always leave The Pegasus Expedition feeling lacking. After a bumpy introduction to Pegasus’ mechanics and worldbuilding, I must take the advice of the legendary writer that quoted at the top of this article: I forgive this game its faults, with the caveat that they are severely improved for the full release.