The Sims 4 went free to play earlier this month, and recently The Sims 5, uh I mean, Project Rene, was announced. I’ve always had a very turbulent relationship with The Sims. Starting with Sims 2: Castaway on the PS2 – still one of my favourite games of all time – and on through 3 and 4, I’ll play intensely for a week and then put the game down for a year. This was fine when I just logged into my then-girlfriend’s Origin account and had a tinker, but I want to enjoy Sims 5 as new packs come out, which means I need to learn how to love this game long-term. Luckily for me, The Sims community has made a silly amount of challenges, so I started with one of the most popular ones: rags to riches.

The idea is simple. Start with a Sim in an empty lot and – without doing a regular job – earn a living wage and build yourself the house of your dreams. On PC, it’s as easy as setting your funds to zero and cracking on, but on console you’ve got to buy something, enter live mode, re-enter build and buy, sell it for less, rinse and repeat. That’s if you want to keep getting trophies and achievements anyway. You can cheat, it just disables them.

I popped a podcast on and hopped to it, and before I knew it I had absolutely nothing but the clothes on my Sims’ backs and a can-do attitude. I opted for four Sims because a) it’s my game and I can do what I want, and b) I just thought it’d be fun to make me and my friends survive in the desert. 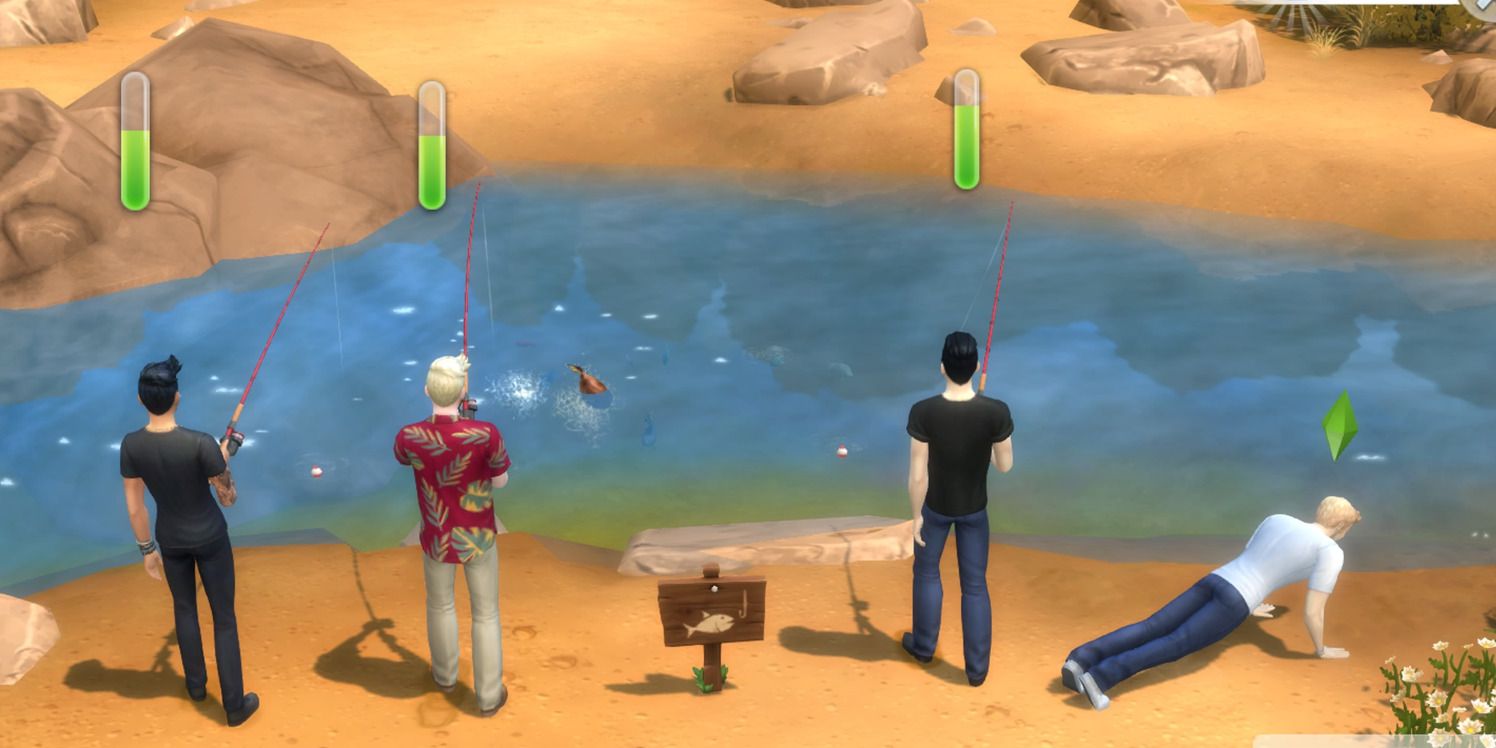 The first few days were rough. We earned money by selling fruit we harvested from wild bushes and fish we caught in the river behind our lot. Rock samples were analysed, fossils were donated, and precious metals were rehomed. There wasn’t enough money for a bed, but there were plenty of benches nearby so I opted to get a toilet. It wasn’t in a room, so my Sims were just shitting in full view of the street. We also had to cook on the park grill a short jog away.

By the end of the first week, I had a decent farm, a bed that my Sims took shifts sleeping in, and a shower. Still no walls or oven, but I had to really prioritise what was essential to my Sims. Turns out, you can live just fine under the stars as long as you don’t have the changing seasons DLC and the weather stays the same year round. Like Frank in Always Sunny, I was relishing living in the dirt, getting through by any means necessary. 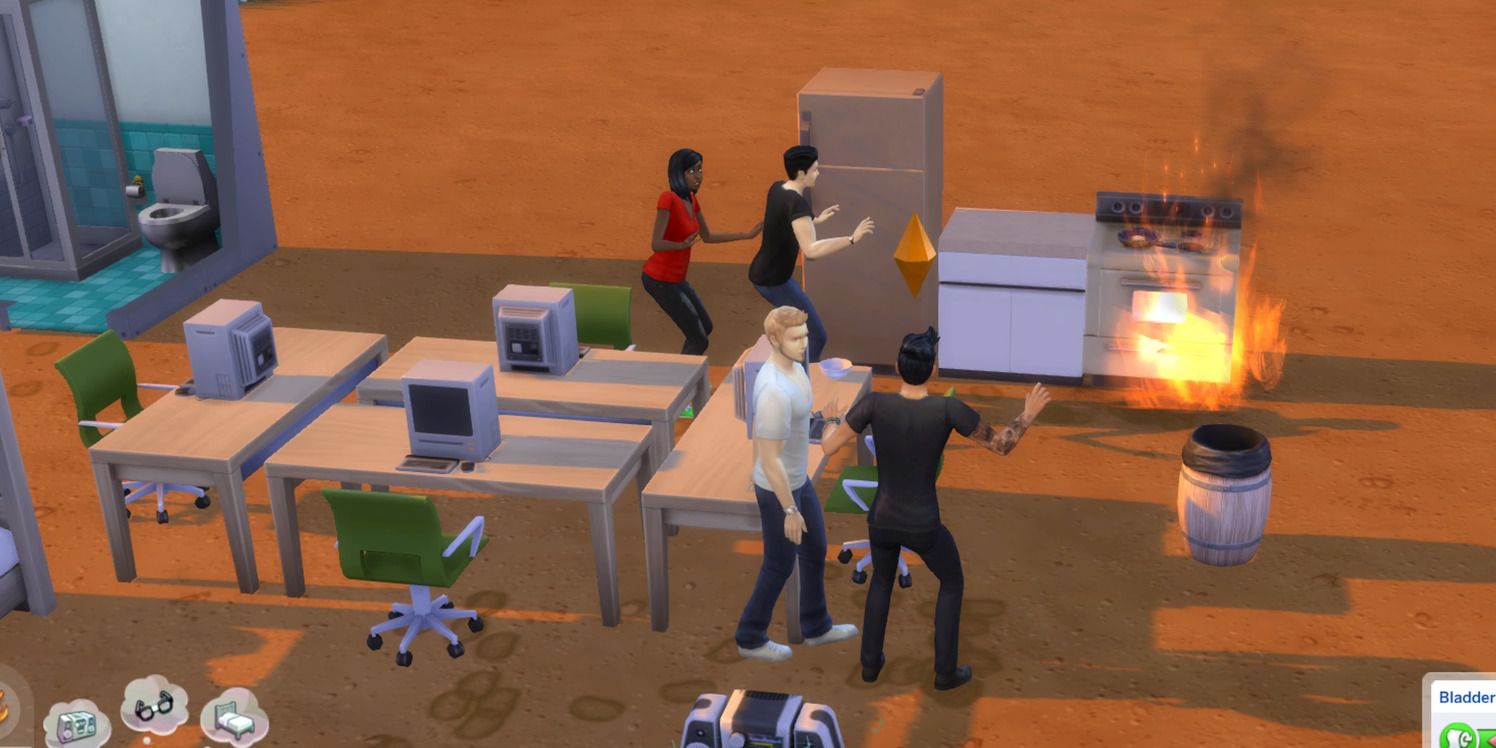 Week two is where things really took off. I found out that homegrown vegetables sell for an absolute boatload of Simoleons. Collecting was off the table, fuck those worthless rocks. Now, my Sims were a well-oiled machine. Two would fish so that I could turn the slippery creatures into fertiliser while the other two would tend the garden. Most of my lot was made up of chaotic rows of plants, just waiting to be picked for market.

Week three was my first major haul. I bought two bunk beds and made a very rudimentary house. It had two rooms, the bedroom/kitchen and the toilet. Fortunately, I was in a position where I could start to think long-term. The garden was highly profitable, but I didn’t want my Sims doing backbreaking manual labour for the rest of their lives. I bought a cheap computer, desk, and chair so that I could turn one Sim into a writer. Royalties are passive income baby, and I wanted them to be able to enjoy their twilight years without having to lift a finger. 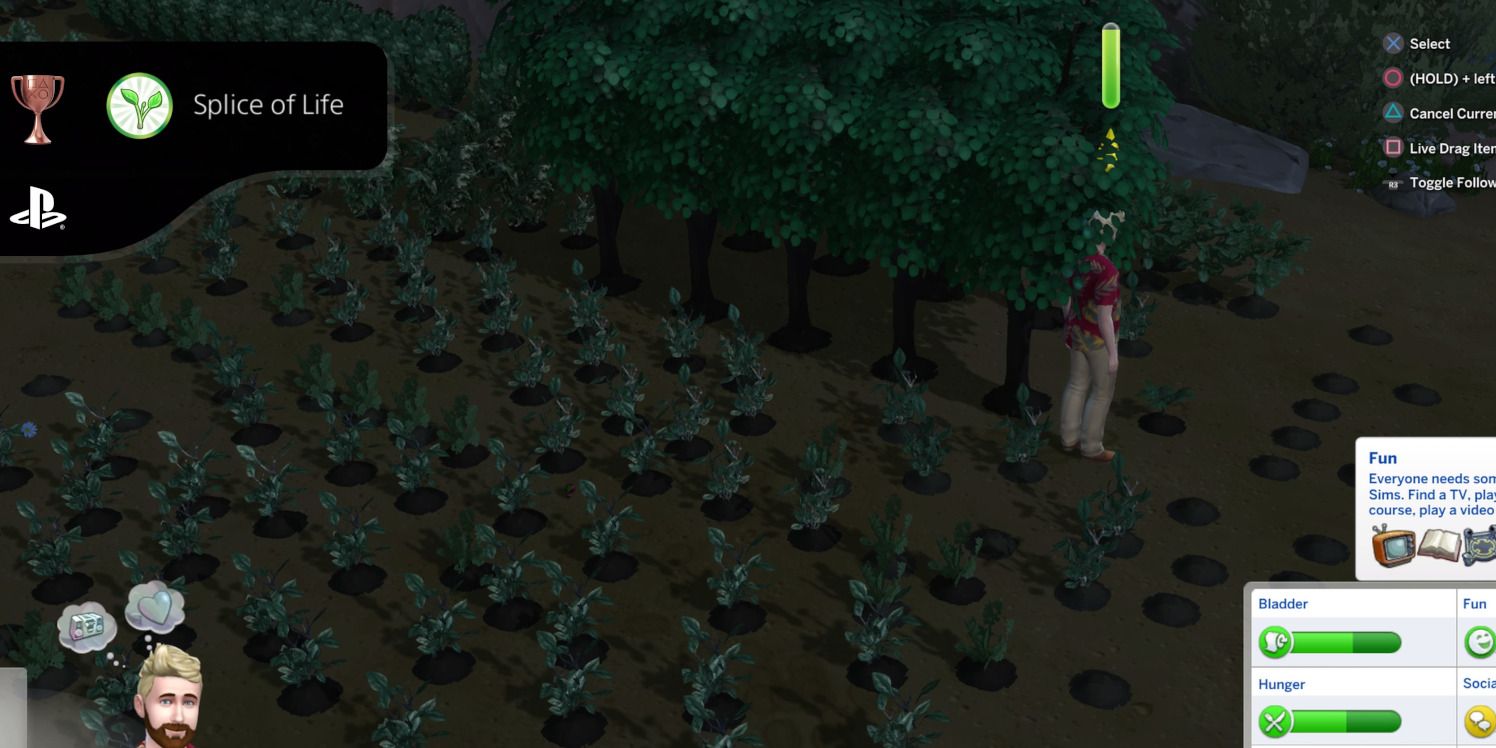 The next few weeks and months played out similarly. My Sims would write a couple books, sell a load of veg, forage and plant more, splicing different species together as their gardening skill increased. The house got bigger. First a fully kitted out bungalow, next a two-story house with four ensuite bedrooms, a games room, lounge, dining room, and office space. There was even enough money to build a gym.

Once I’d installed sprinklers and gotten gardening, fishing, and writing skills to level ten, the challenge was basically over. The plants were all of the highest quality, so the veg sold for stupid amounts. The royalty checks were enormous and coming in every single day due to the sheer volume of books that my Sims had produced, and the fish were big and rare enough that they could be hung as decorations or sold for vast profits. 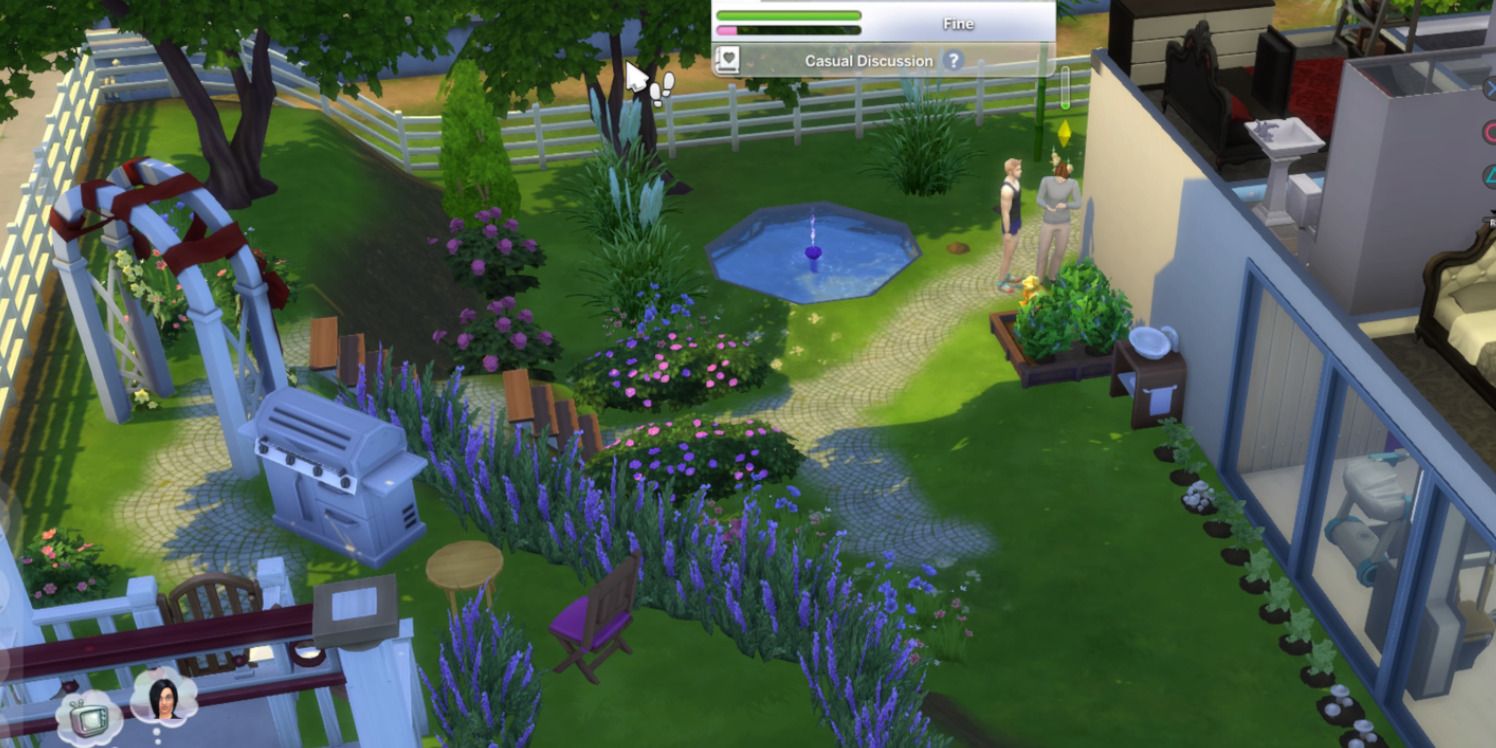 The house was perfect, too. I moved out of the desert and into the suburbs to recreat my own apartment, but with some added perks. The garden was streamlined so that I could build my Sims an outdoor entertainment area with lovely natural features. My Sims had made it. They only needed to garden for a few hours a day because all the plants were so rare and such high quality that I barely needed to sell any to afford my bills, and the writing royalties were so numerous that I could buy anything my Sims needed. I could have gone for an even bigger house, but I just wanted to recreate my own. The challenge was over.

There’s something very bittersweet about finishing a Sims challenge run. With a clear end goal in mind, every moment was engaging as I could plot out various milestones I needed to reach: four beds, a proper kitchen, a sprinkler system. I could have kept playing, sure, but it would have been the same as before. I’d have had fun for a week and then put the game down for a year. So, it’s time to say goodbye to the boys and move on to the next challenge. I hate seeing my Sims die, so trying out the 100 babies challenge next may be a good way for me to get over my fear of the circle of life.