Arcade Spirits: The New Challengers does what good visual novels do best. It hooks players with an eclectic cast of characters and leaves us wondering where all those hours just went. And, like all those other great VNs, it tantalizes with scattered hints as to what one's file might be like had different decisions been made along the way to the finale.

That's great. But it can also feel overwhelming. Yes, it's a visual novel, and no, it doesn't buck the trend and implement meaningful exploration options. It's entirely "on rails," so to speak, so you won't get lost in Chinatown's alleyway en route to Good Clean Fun. But the sheer amount of decisions you'll make as you navigate the complex social undercurrents of Seeker's new crew means most folks will be on pins and needles working hard to ensure their favorite characters offer more than cold shoulders.

Here are six tips to make your Arcade Spirits: The New Challengers journey as stress-free as possible so you can kick back and relax with your new BFFs.

Don't Fret Over Not Playing The First Game 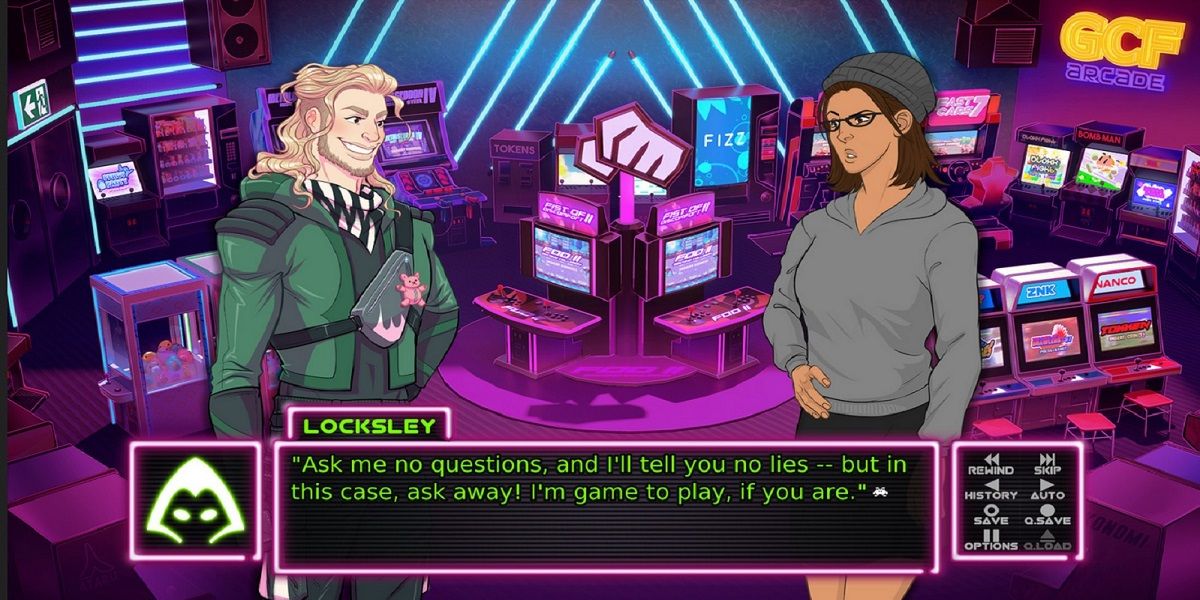 The original Arcade Spirits is a fun time. You can import data from it into The New Challengers to provide a loose template for the sequel's established canon. Impressively, doing so also means nixing some of the more talkative tutorials designed to introduce first-time players to the world of 20XX.

On the flip side, those talky bits are perfectly tailored for newcomers to get not just the gist of the game's setting but a genuinely solid feel for it. And, since regardless of whether there's an imported file the protagonist invariably changes between games, you won't feel like you've missed an integral chapter of your own life for starting here.

Min-Maxing Your Dialogue Choices Won't Do You Much Good 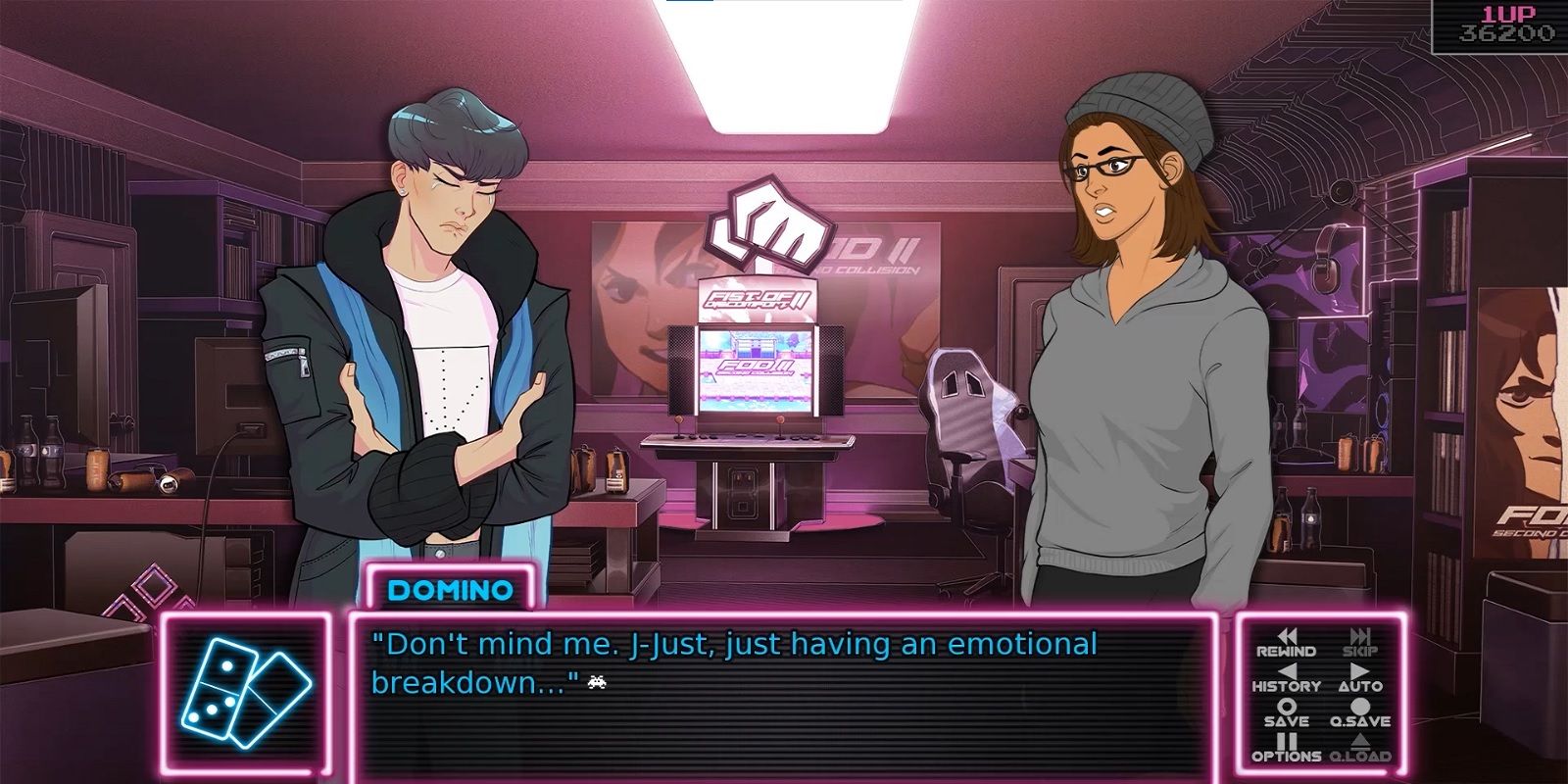 Arcade Spirits: The New Challengers follows a fairly conventional approach to choice-based video games — dialogue options are coded to one-word descriptions of the sort of tone your character will be voicing to others, enabling you to decide how best to respond to each of the game's eclectic band of friends and foes. While it may seem like each of Seeker's buds conforms to a rigid enough archetype to "game" the system and make everyone love you with minimal effort, the developers smartly shake things up a bit.

Just because someone typically reacts positively to, say, kindhearted replies (appropriately marked with the "Kindly" personality trait icon on your screen) doesn't mean they're slavishly devoted to it. Grace is a fan of politeness, but she'll need a heavier hand at times. She's only human. Domino and Jynx appreciate dark humor, but there are limits. Again, human. Treat each conversation like a real one. Odds are good you'll do just fine. 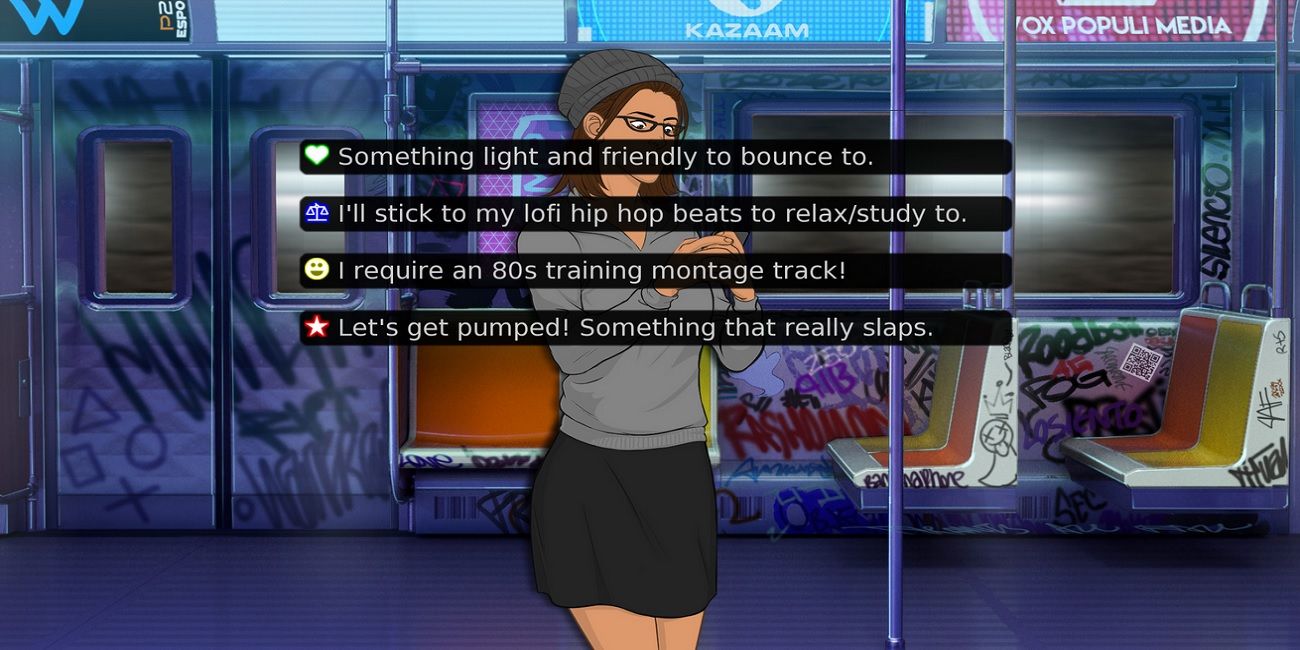 Along similar lines, get used to the likelihood that you'll make Seeker rub folks the wrong way sometimes. For one thing, replays will let you relive it all armed with the proper foreknowledge to say something more inspirational next time around. More to the point, Arcade Spirits: The New Challengers doesn't bite hard in this regard. You're not going to mess up a chat so badly that Rhapsody swears you off and leaves forever.

One of the game's foremost themes is acceptance. Most of the gang have been through thick and thin together, and Seeker's arrival will ultimately strengthen those bonds ever further. You're going to make mistakes, upsetting various characters or (more frequently) simply failing to touch their hearts and brighten their minds as well as you might have. Consider it part of the Arcade Spirits experience.

If Fist of Discomfort 2 Gives You Anxiety, Take Comfort in Turning It Off 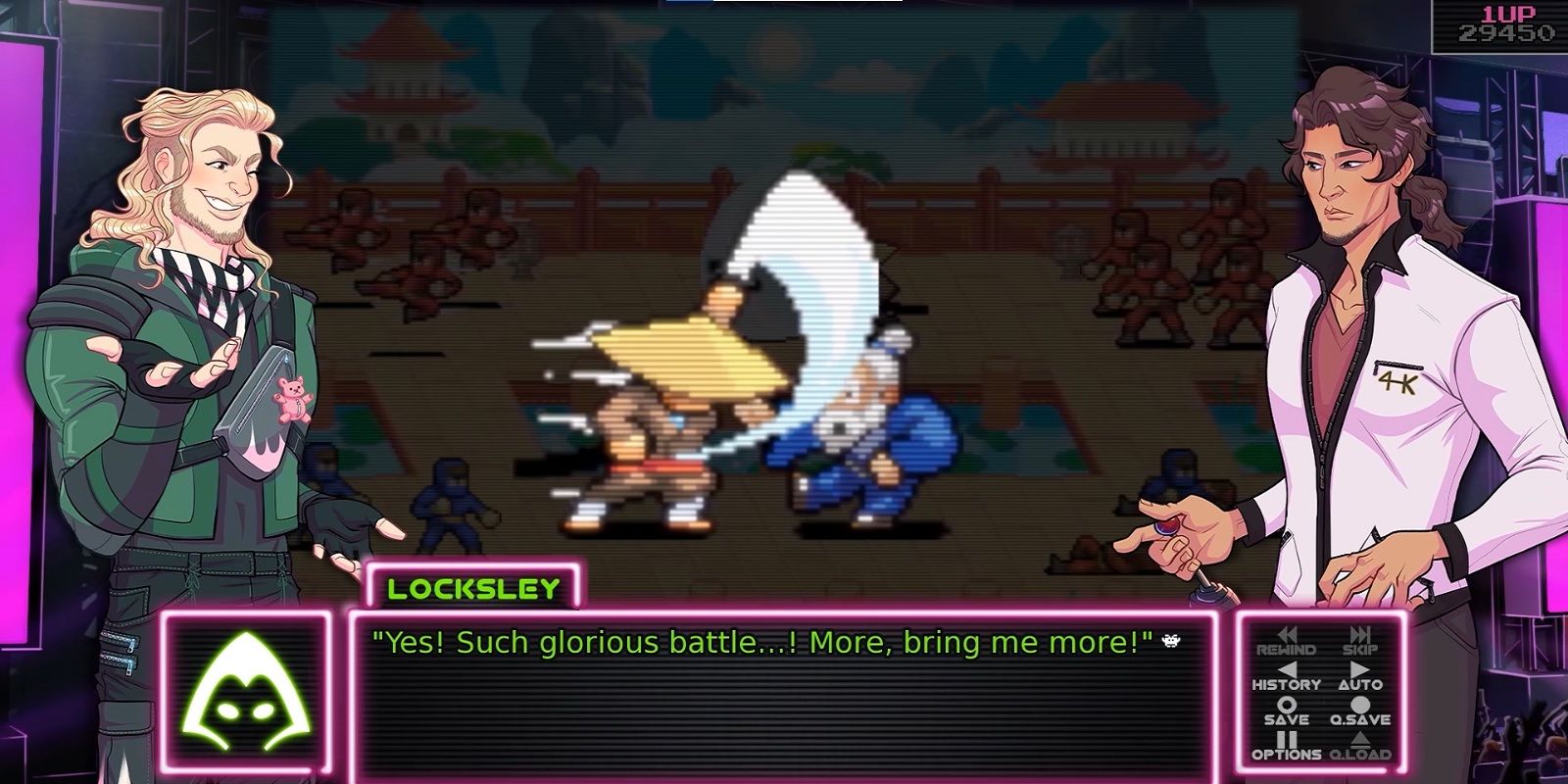 The story of this game centers on someone who is quite good at a certain fictional competitive esports game, Fist of Discomfort 2. Multiple times throughout the adventure, The New Challengers' visual novel trappings are temporarily brushed aside in favor of a rudimentary (though riveting) strategy-centric representation of FoD2, as it's often abbreviated.

Your job when this happens is to select one of four potential moves eight consecutive times. Seeker is given some notion of what to expect from any given opponent, but the player's own luck and skill will factor in slightly.

The outcome of the major matches can drastically alter the course of Arcade Spirits: The New Challengers' storyline. While this is a thrilling prospect to some, it's a dubious disclaimer for others. The developers were clearly aware of this, as there is an option to disable Fist of Discomfort 2's gameplay sessions entirely, letting players choose the outcome of each match from a menu. There's no penalty for this, so do what suits you best. No sweat.

Iris Learns From Your Decisions 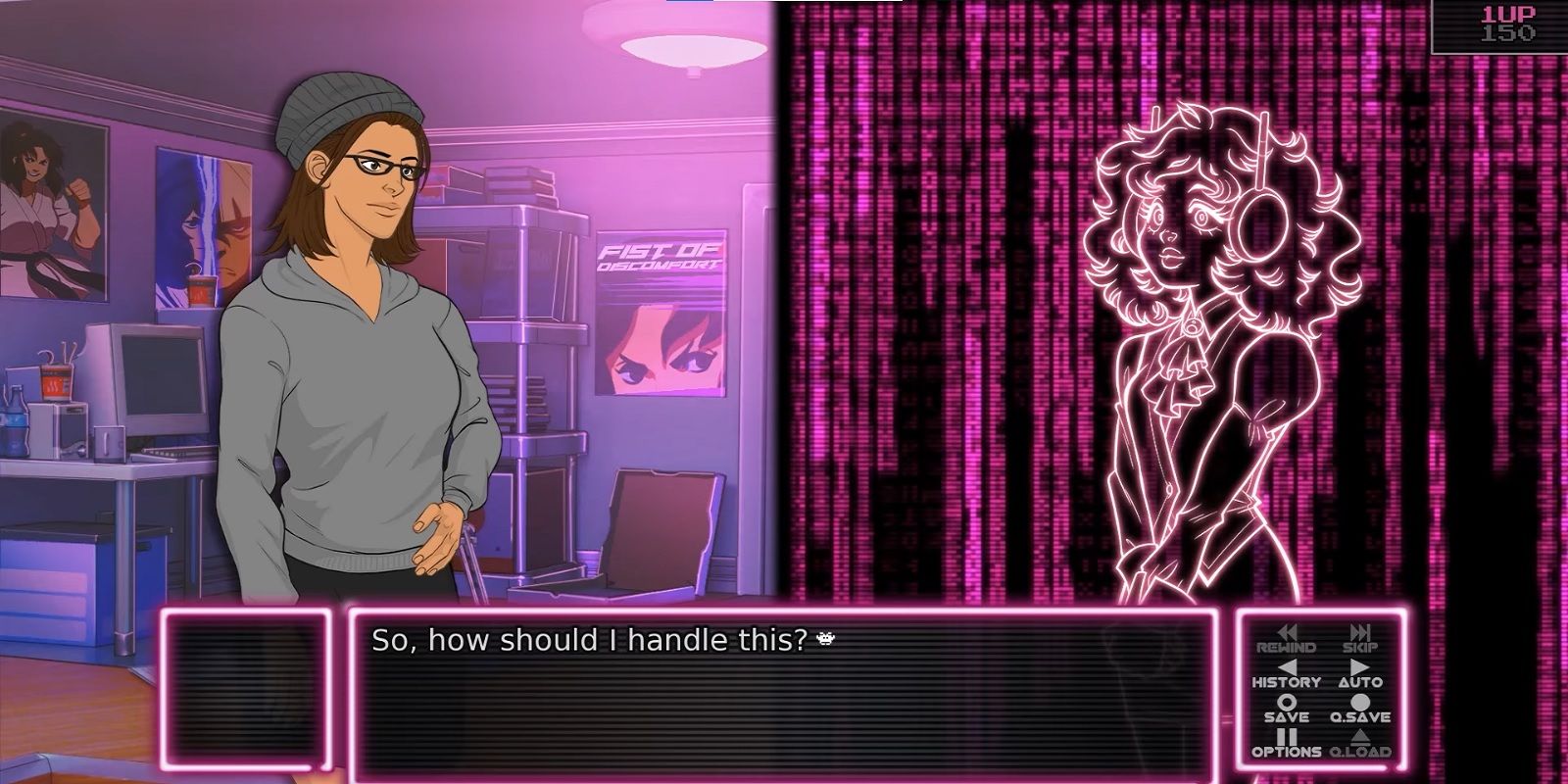 In addition to managing your relationships with other flesh-and-blood characters through Arcade Spirits: The New Challengers' five-trait dialogue system, there's another system completely unique to Iris: Orderly versus Chaotic. This is measured long-term and will ultimately serve to shape her personality toward the end.

As you interact with Iris over the course of the tale, she will sometimes ask if you'd like her to do various things on your behalf. Since she's a young, up-and-coming AI, concepts of morality are pretty foreign to her, and she's relying on Seeker to set the tone. Some of Iris' ideas are less ethically savory than others. Redirecting that passion to please toward something more law-abiding will nudge her closer to Orderly. Let her run amok for a Chaotic conclusion. 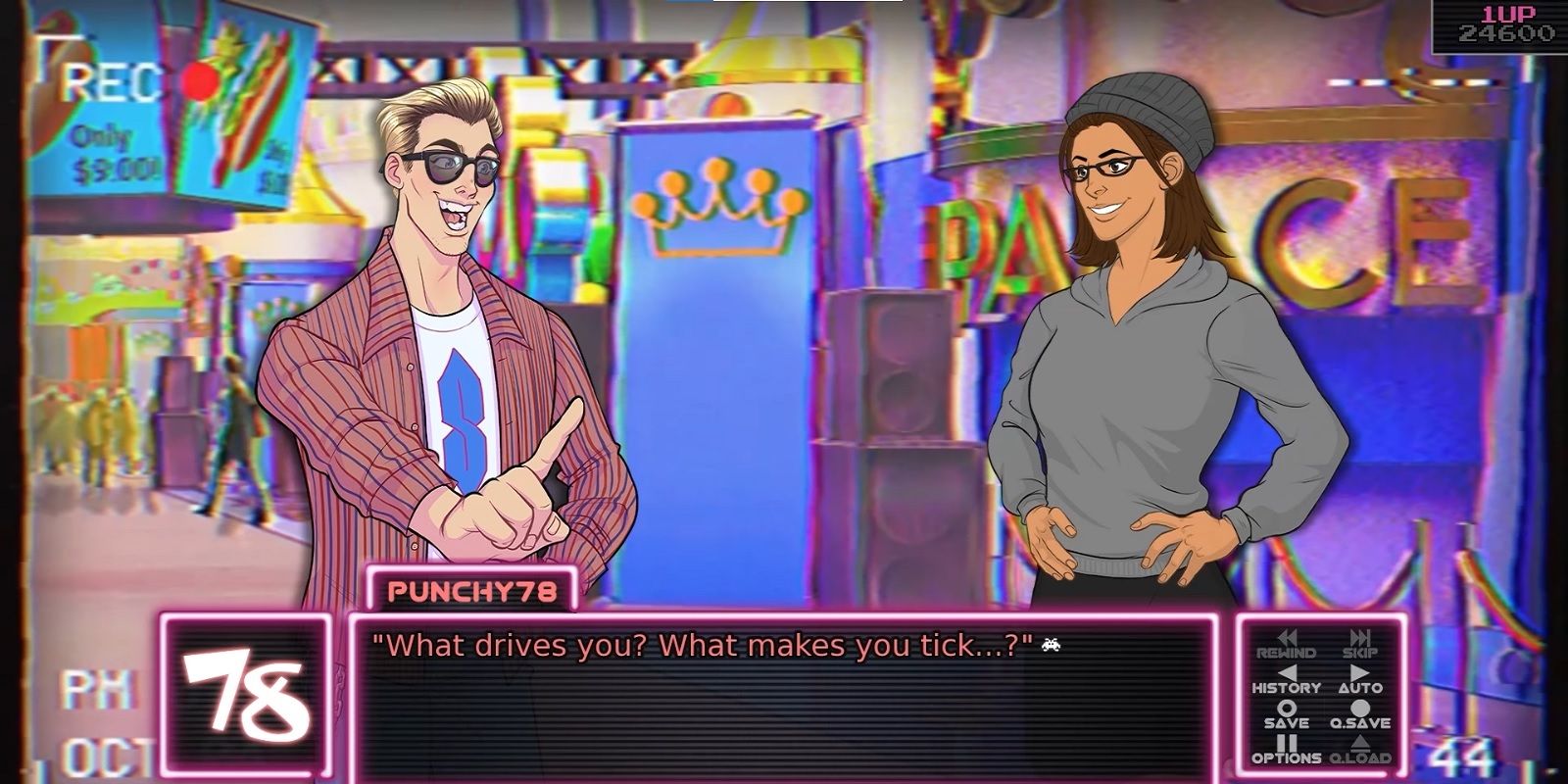 Steady. Kindly. Quirky. Gutsy. Flexible. The five-trait dialogue system is far and away what you'll engage with the most in this game, and it's handy to know ahead of time that each of your six companions mainly prefers a blend of two distinct traits. We've talked already about the fact that there will be exceptions along the way, but the sharpest thing you can do is nevertheless to ascertain which two traits everyone responds best with and bear that critical information in mind every time you speak with them.

It's not as hard as it sounds, not least of which because Flexible will never be one of the two traits. Flexible, called Basic in the first game, is… well, it's basic. It's the trait you tap into when you want to be as neutral as possible. Since "neutrality" isn't really a major personality type, none of your crew will veer toward that over the more overt stuff.