Riding on the back of the platform’s new Soundtrack service, Twitch has now fallen into the crosshairs of the music industry.

On top of its numerous abuse allegations and the recent DMCA takedown notices, Twitch has received another wave of backlash from major US music institutions for its approach to servicing non-licensed music. Variety obtained a copy of a letter addressed to Twitch and its parent company Amazon from various music institutions, including the Recording Industry Association of America. The institution targeted Twitch for ignoring copyright laws and including music on its Soundtrack service before properly securing the current licenses.

The scolding letter details Twitch’s negligence towards obtaining the proper synch and mechanical licenses for its Soundtrack tool, as well as providing access to musicians’ work without permission. The streaming platform was accused of ignoring the multiple music infringements over its head, which, in the long run, could be detrimental to its reputation. Twitch continued to feature unlicensed music – which was also made available to its users – despite announcing back in June that it would remove the material in dispute. 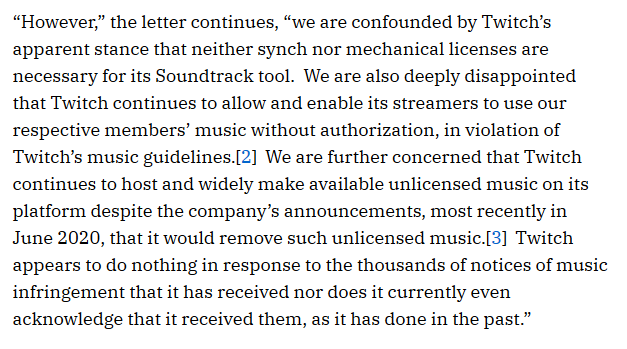 Twitch’s Soundtrack tool allows streamers to use its licensed music catalogue, filled with millions of songs from independent labels. However, the Soundtrack service does not hold deals with various institutions and publishers, and also lacks the rights. The platform turned to livestream concerts, DJ sets and other broadcasts of unlicensed music during the pandemic, which saw an 83% surge consisting of 5 billion hours of streamed content during Q2 of 2020.

Even though the music industry built a strong case, Twitch did respond by disputing some of the claims. Provided in a statement to Variety, Twitch representatives confirmed that the Soundtrack tool was a “fully licensed service” and a great platform for artists to be showcased and streamers to discover them.

Despite refuting its own copyright claims, Twitch has been issuing its own strikes to streamers in a recent “DMCA bloodbath”. Twitch users were astounded to find out that their content had been taken down without any explanation. However, we now think this could be the platform’s crusade to combat any musical infringement.