Whenever a large update or major expansion launches for Final Fantasy 14, most players are drawn to the big hitters — main scenario quests, jobs, and duties. There’s also the appeal of extra side content, glamour gear, minions, mounts, and other shiny additions we can’t wait to get stuck into. Part of experiencing new content is discovering it in the first place. Sure, we know where to get the next quest, but what about that minion we saw in the patch notes? Or that nice-looking armor? We work tirelessly to delve into the inner workings of new content to benefit the whole community.

But what about the rest of the content and the work that goes into that? I’d never considered it until it was recently brought to my attention, but when new areas are added, you’re naturally going to get new gathering resources for crafters and gatherers. Miners have new nodes to tap into, Botanists have new trees to fell, and Fishers have plenty more fish in the sea (or freshwater).

I spoke with avid players Tyo'to Tayuun and Fruity Snacks about the work that goes into Fishing Discovery, a source of information where the community works together to break down all the information about new fish added in each content drop.

Even with the help of data mining, players only have limited information when new fish are added, such as their names, which holes to catch them in, and whether each fish has specific restrictions to do with time or weather. They don’t know which bait is needed. Are the fish moochable? No one knows at first. That’s where the fishing community comes together to find out. 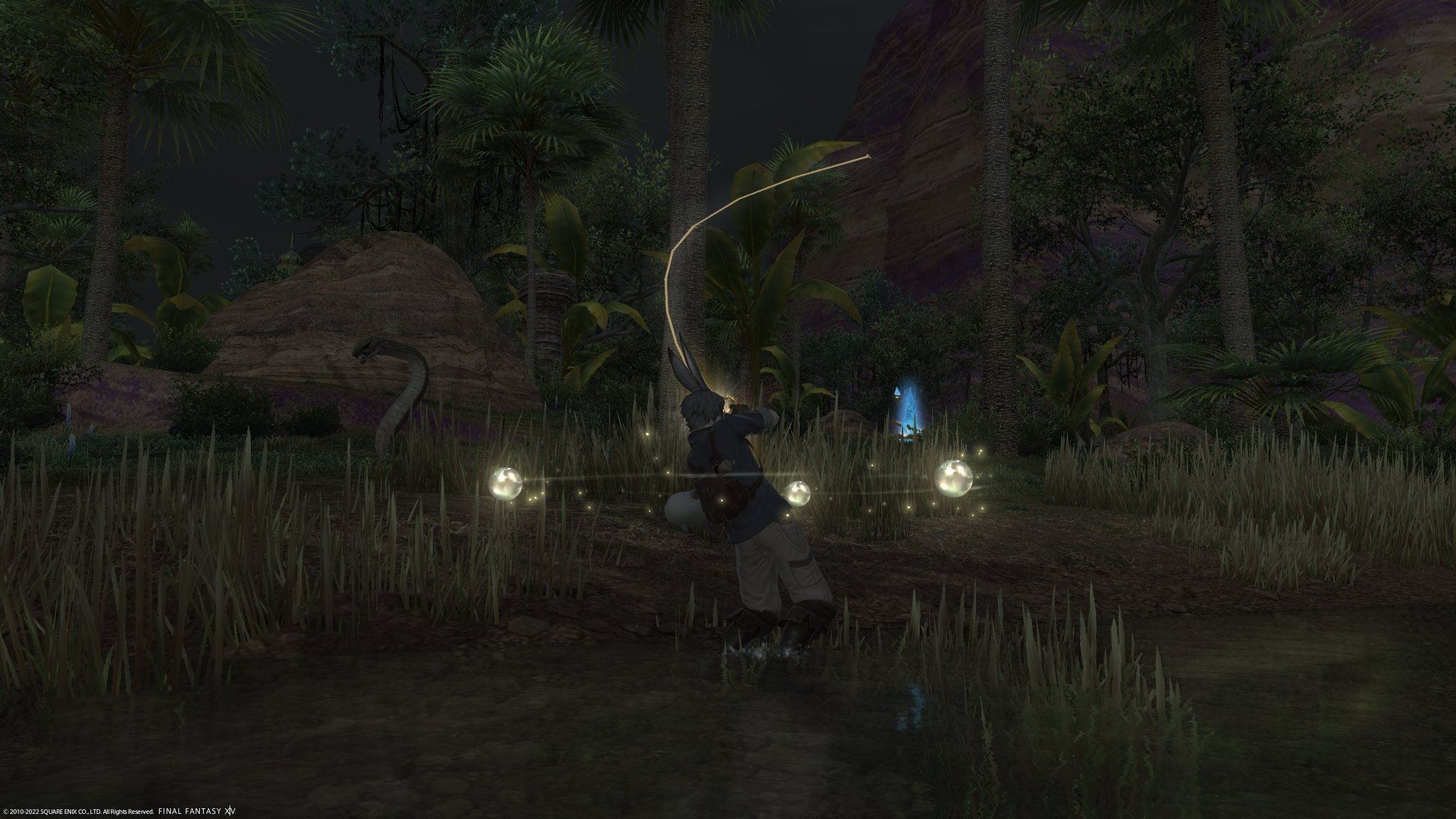 The English-speaking community largely uses the Fisherman’s Horizon Discord for this very purpose, sharing their discovery processes in a spreadsheet to report what they’ve attempted and the results of each venture. Other resources are used to help build their database, such as Twitter, the lodestone, and JP websites. The end result is a robust spreadsheet with an unbelievable amount of dedication and information poured into it, with Tyo’to showing me Patch 5.55’s spreadsheet as an example, highlighting Ealad Skaan’s efforts in particular.

Each fish has a spreadsheet, with sections dedicated to weather combinations, time blocks, and baits/mooch. Players then test and record their findings, adding the data for each fish. The table on each sheet shows a condensed view of the information, and as more data is recorded, the cell darkens to display a heatmap of how well it has been tested overall.

“This is important because a fish is not guaranteed to bite even when you are fishing in the correct window,” Tyo’to explains. “So having one or a few tests does not mean that isn’t the right window. However, 20 tests with no bites is what I consider sufficient to rule it out confidently as not the right window for the fish, and this number is when the sheet greys out the window.”

Sharing information this way also allows players to coordinate their efforts, so they can work together to try different baits and cover all options for rare weather windows. Once a fish has been found, the sheet is updated, and fishers can continue to test the waters (pun intended) to expand the window by trying other weather chains and time blocks. It’s quite a process. 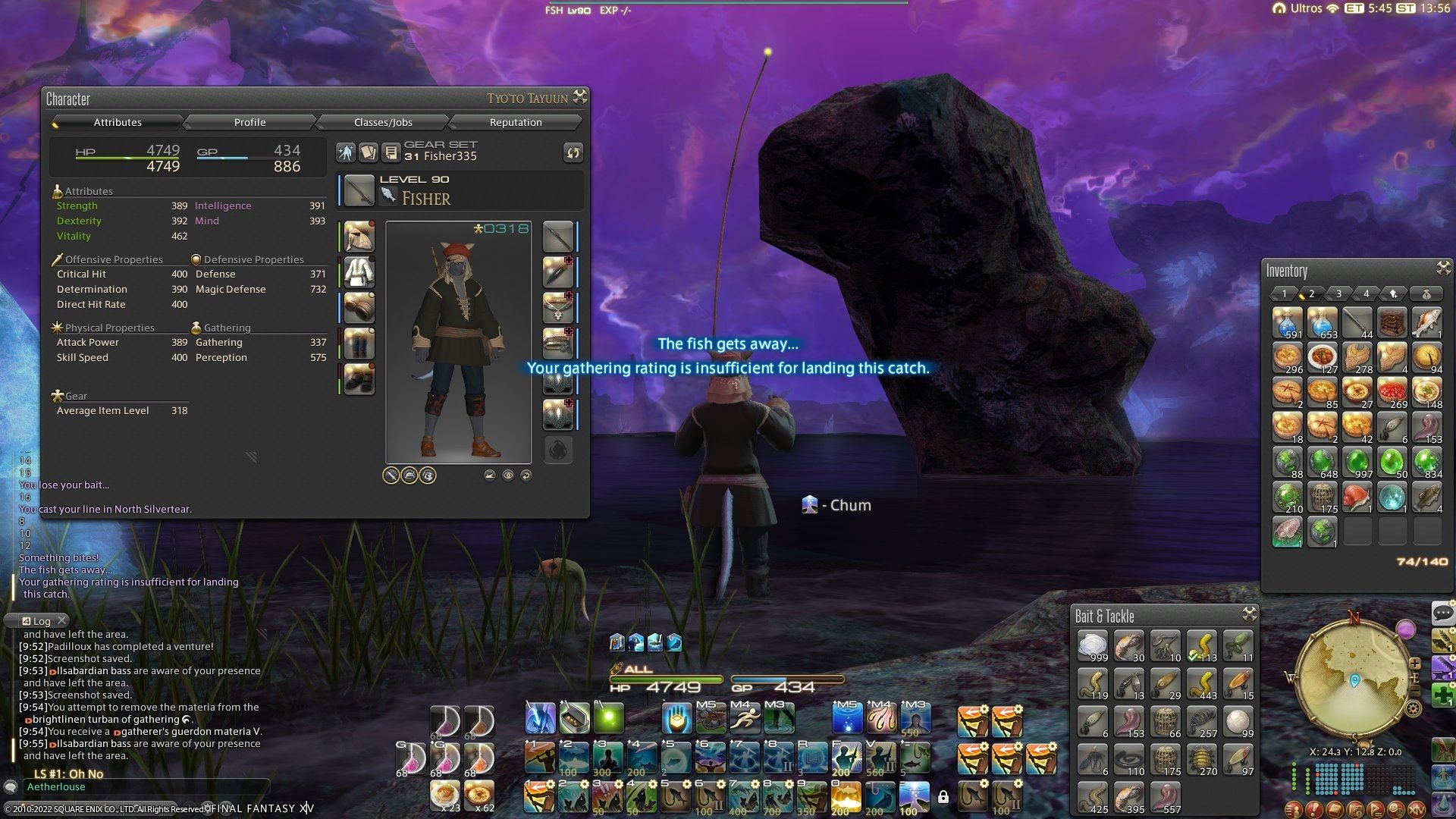 “These eventually get tested enough and either the fish’s window as we know it is expanded, or we have enough tests without bites that we are confident that the window is something specific and narrow,” Tyo’to tells me. “This is as good as our knowledge typically gets, since there is almost never any way to know the window with 100 percent certainty, and for the fish where this is possible it’s due to some unique attributes the fish or the fishing hole has.”

As the person in charge of the spreadsheet, Tyo’to finds themselves updating it as frequently as possible, usually every 23 mins, as that’s eight in-game hours, and the weather changes every eight hours. “I take off work, don’t get much sleep, and try to fish while handling the sheet,” they tell me. “I’ve seen the work done for it compared to hardcore raiding and in some sense that might be correct.”

“Fish get ‘harder’ and ‘rarer’ the later in the patch they are released,” Fruity adds. “So big fish in Patch 6.1 are typically more common and less ‘difficult’ than fish released in Patch 6.5. Fish released in the last major patch, X.55 — those are the legendary fish, and are considered the hardest and rarest fish in the game. Discovery happens on these fish as well and works the same way. Fish from Patch 6.1 took less than a day to find. Fish in Patch 5.55, the Shadowbringers Legendaries, took over a week to find them all.”

In early Endwalker patches, the fish were all found within a day, but for Patch 5.5 it took two weeks to find everything, which resulted in Tyo’to sleeping only a couple of hours at a time as there was no real downtime during the discovery process. They’re not just busy fishing and recording sheet data either, as Tyo’to also uses forecasting tools to create a list of the most undertested windows for players to use, tracks bites when using Chum or not, and tests to find the minimum stat requirements for big fish. 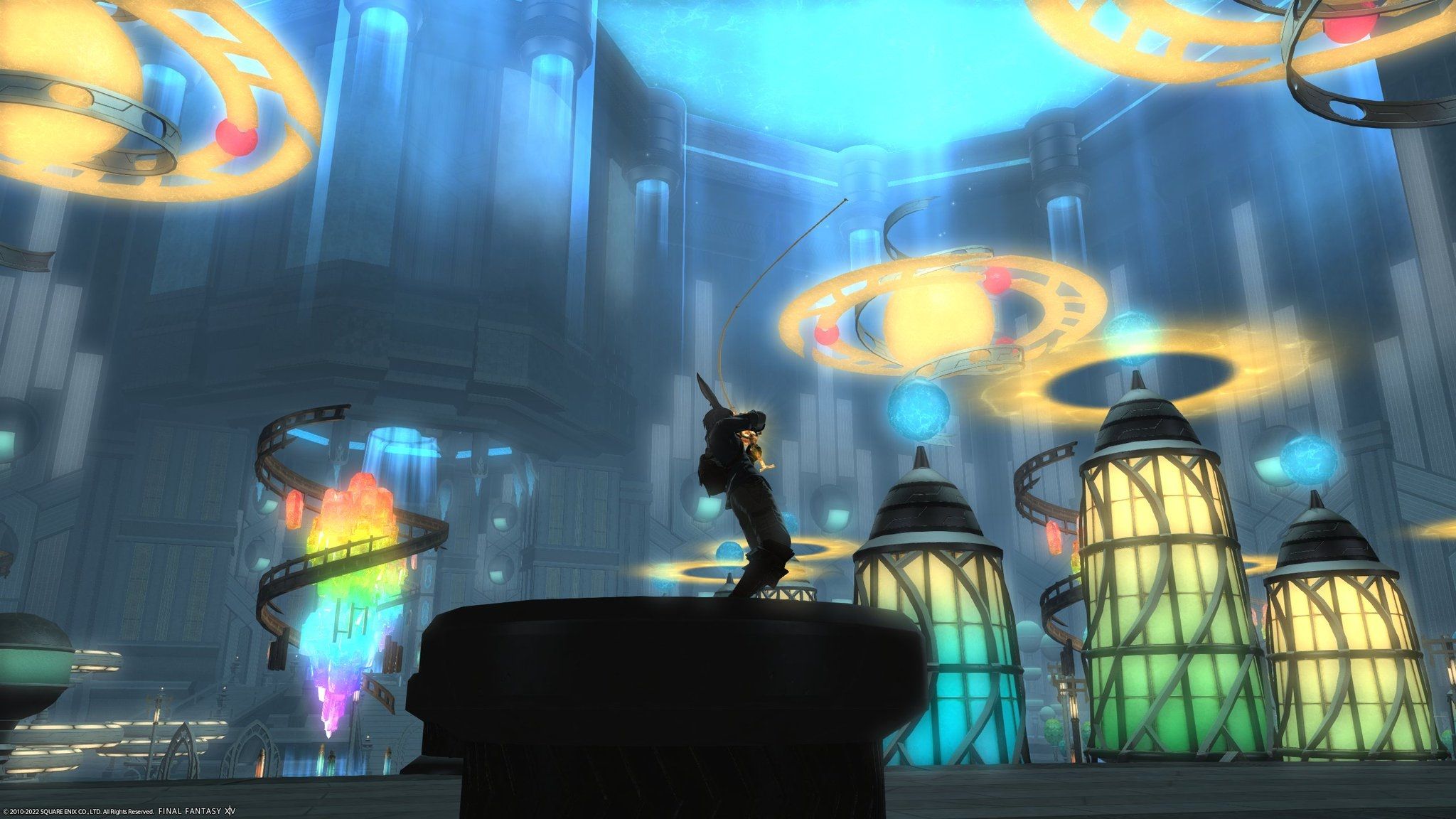 This centralised way of collecting information as a community, which only really happened after Patch 5.3, has changed how fishing discovery works as a whole. The booming popularity of the Fishing community has seen the number of players taking part in discovery grow, enabling a smoother and more efficient process for everyone involved.

“Discovery is a huge community event now that people take time off from work and get up super early to participate in,” Fruity says. “Each major patch that adds new fish is always a fun event with everyone buzzing with curiosity and intrigue. Fishing has been making a big surge in the game now, it seems, and I definitely contribute the excitement of discovery towards its rise in popularity.”

“The Fisher community overall is very egalitarian,” Tyo’to says. “So this means that if any player thinks a particular window is interesting or something is worth paying attention to or trying, they are free to call it out and ask people to help test and people will do so. The tools I use to find things out are the same ones everyone has access to and people have been using them and coordinating around windows to quickly rule things out.

“Carby, who runs the vital Carbuncleplushy website, as well as people who work on Teamcraft are in direct communication with me during this period and taking input as information is discovered, and are in communication with the Fisherman’s Horizon in general so they are also quick to update.”

When discussing fishing discovery, one thing that surprised me most was learning that it has taken longer to find a single fish than for all the world first clears of Ultimates, excluding Twintania. There are actually a number of fish this applies to, but the most notable is the Bobgoblin Bass, which came out in Patch 3.4 on September 27, 2016, and was found 45 days later on October 11, 2016. 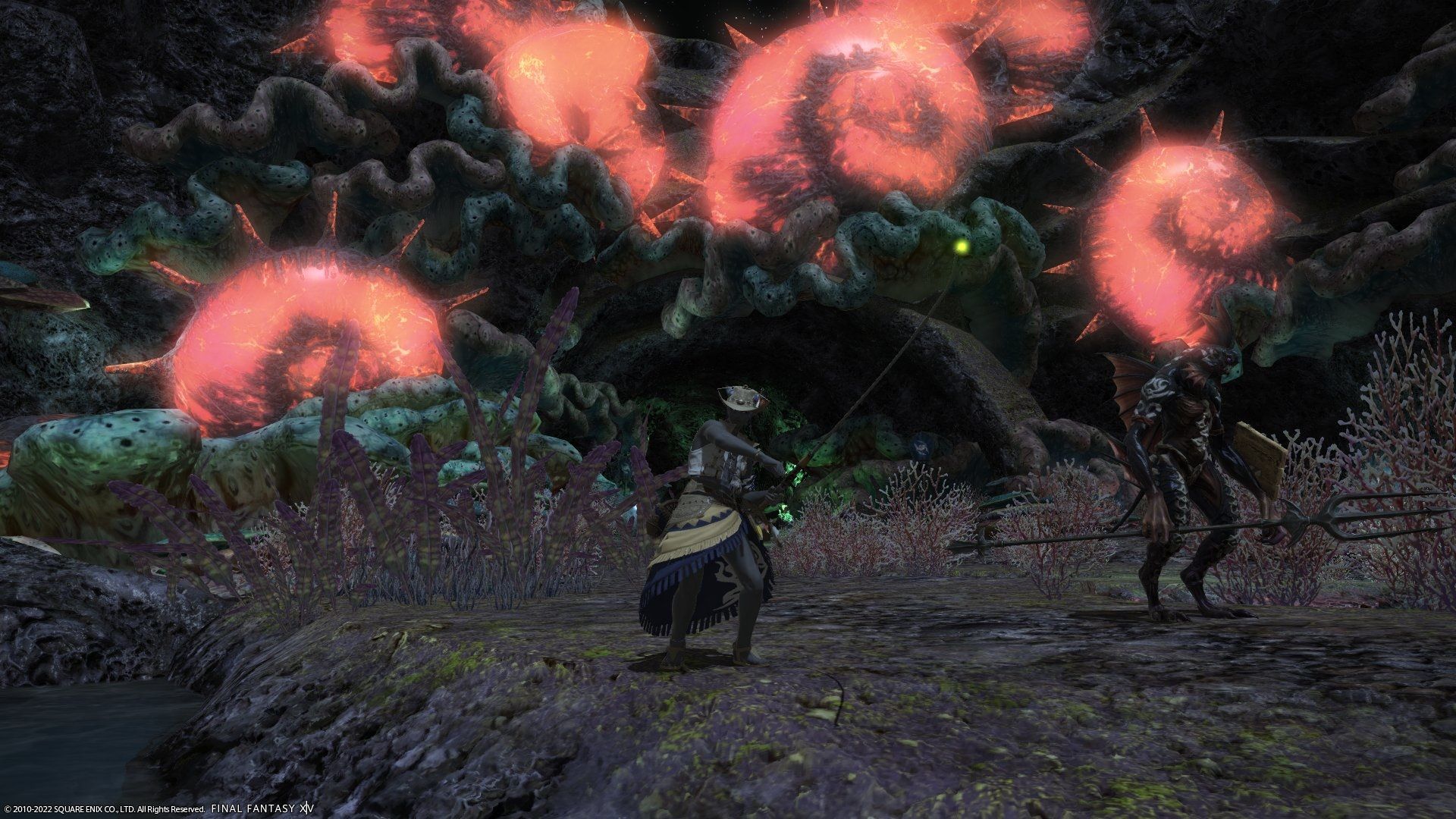 “Another noteworthy thing about this fish is it has the longest period of unavailability in the game that’s happened so far— 39 days —, and it’s regularly unavailable for ~20 days,” Tyo’to tells me. “However, in the time that it took to be found, there were eight windows for it that happened before the one in which it was discovered. It’s not a notably complicated fish, though in Heavensward it was more difficult to fish for because of the skills and GP situation at the time. With the current coordinated discovery effort, and just more people doing big fishing in general, I have no doubt that were it to come out now it would be found sooner.”

“A more contemporary example of a particularly long discovery period was in Patch 5.4 with Moonlight Guppy, which took 21 days to find. It’s a very simple fish and why it took so long has nothing to do with difficulty at all, nor is the window extremely rare. Before it was found it was actually fished more than five times in its window, with the correct bait, but no one initially got a bite. It’s a very good example of why rigorous testing is important, and also not to draw conclusions too soon, because many people did this and started ignoring its weather condition.”

If you want to learn more about the Fishing community and the discovery process, Tyo'to recently did a panel at LunarCon that you can watch below. You can also check out the Fisherman’s Horizon Discord, and follow Fruity and Tyo’to on Twitter.