Udemy has released data highlighting the extent to which people are turning to online courses during lockdown, and the courses that they’re choosing to enroll in.

The San Francisco-based company, which is among the more prominent platforms that constitute the so-called “massively open online course” (MOOC) movement, has said that it saw a more than 400% spike in course enrollments for individuals between February and March. Similarly, business and government use increased by 80%, while instructors created 55% new courses.

The data supports other reports from around the world which have indicated that the online learning industry has been boosted by lockdown measures designed to curb the spread of COVID-19. It also follows a trend in the business realm, which has seen demand for remote-working tools go through the roof.

Udemy’s data indicates that demand was starting to increase slightly in early March, before the first national lockdown was ordered in Italy on March 11. As countries around the world followed suit in the weeks that followed, enrollments increased by 425% in late March against the previous month’s baseline, and in the following month it has largely remained at above 300%. 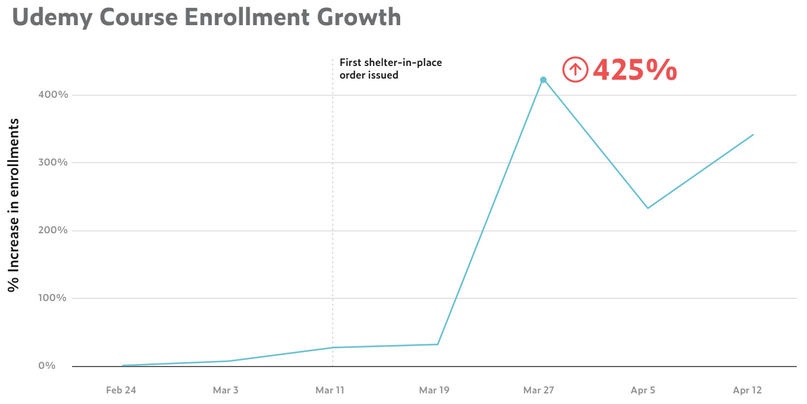 Digging down into the types of course people have been studying reveals a lot about the current state-of-play in people’s lives. According to Udemy’s figures, in the U.S. people have been leaning toward creative courses, with Adobe Illustrator lessons up 326%, while in India there has been a 281% rise in Business Fundamentals and 606% growth in communication skills course enrollments. Italy, meanwhile, saw a 431% rise in people seeking guitar lessons, followed by copywriting (418%) and Photoshop (347%).

Looking at the top-line growth figures, technical drawing has seen the biggest surge overall with an increase of 920%, followed by Art for Kids (5315), pilates (402%), and coding for kids (375%). Looking at tech skills specifically, Google’s open-source machine learning framework Tensorflow has been in high-demand with a 46% increase.

Founded in 2010, Udemy has claimed some 50 million student enrollments in its 10-year history, spanning 150,000 courses ranging from communication and team management, to coding and data science. Udemy raised a fresh $50 million in funding less than two months ago — valuing the company at $2 billion — which has turned out to be fortuitous timing as businesses and consumers will have to rely more on remote learning throughout 2020 and likely beyond.

Pre-pandemic figures indicated that the global e-learning market was gearing up to become a $319 billion industry by 2025, up from $188 billion in 2019. With the future of work and education now likely to become the norm for the foreseeable future, things are looking rosy for Udemy and its ilk. Moreover, Udemy’s data indicates that people are turning to online learning for both personal hobbies and professional development, which highlights how big its potential market could be.