The early and mid-game of V Rising primarily has you killing off various Human bosses, as they seek to control your former lands. As you grow in power however, you will begin to encounter more of the powerful monsters the game has to offer. Frostmaw The Mountain Terror is a difficult challenge that presents a serious threat to underprepared vampires.

This guide will instruct you where to find Frostmaw The Mountain Terror, the best strategy for fighting him, and what you will be rewarded with, should you manage to beat him. 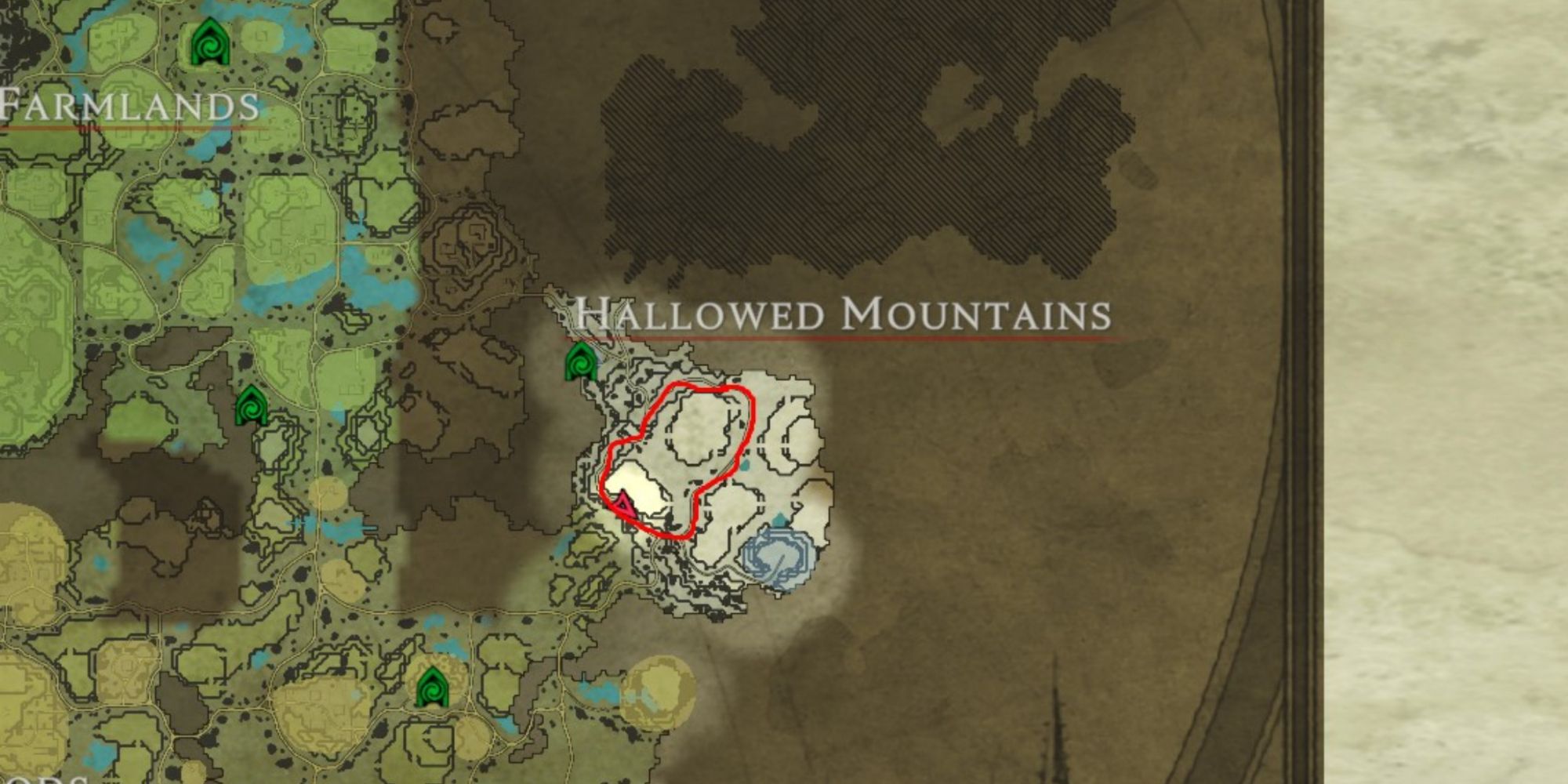 Frostmaw The Mountain Terror can be found patrolling the main road in the Hallowed Mountains region. You may never have traveled to this place prior to seeking him out, as there are no earlier bosses or unique resources that will have compelled you to come here. It is a snowy wasteland with a small variety of resources and enemies. Wolves and Bears roam around, and there is even a Stone Golem that Frostmaw will regularly engage in battle. He will defeat it pretty handily, but it can be a good opportunity to take a slightly easier fight.

There are no real enemies you need to take care of before engaging Frostmaw, just make sure you have a bit of space to run around in, as you will need to be dodging some big abilities. There is a Vampire Waygate very close to his route, so you can teleport over and engage him very quickly.

Frostmaw may technically be a roaming boss, but he has a very small patrol route, and you can easily run around in a circle to find him. However, using your Blood Altar will save you some time. 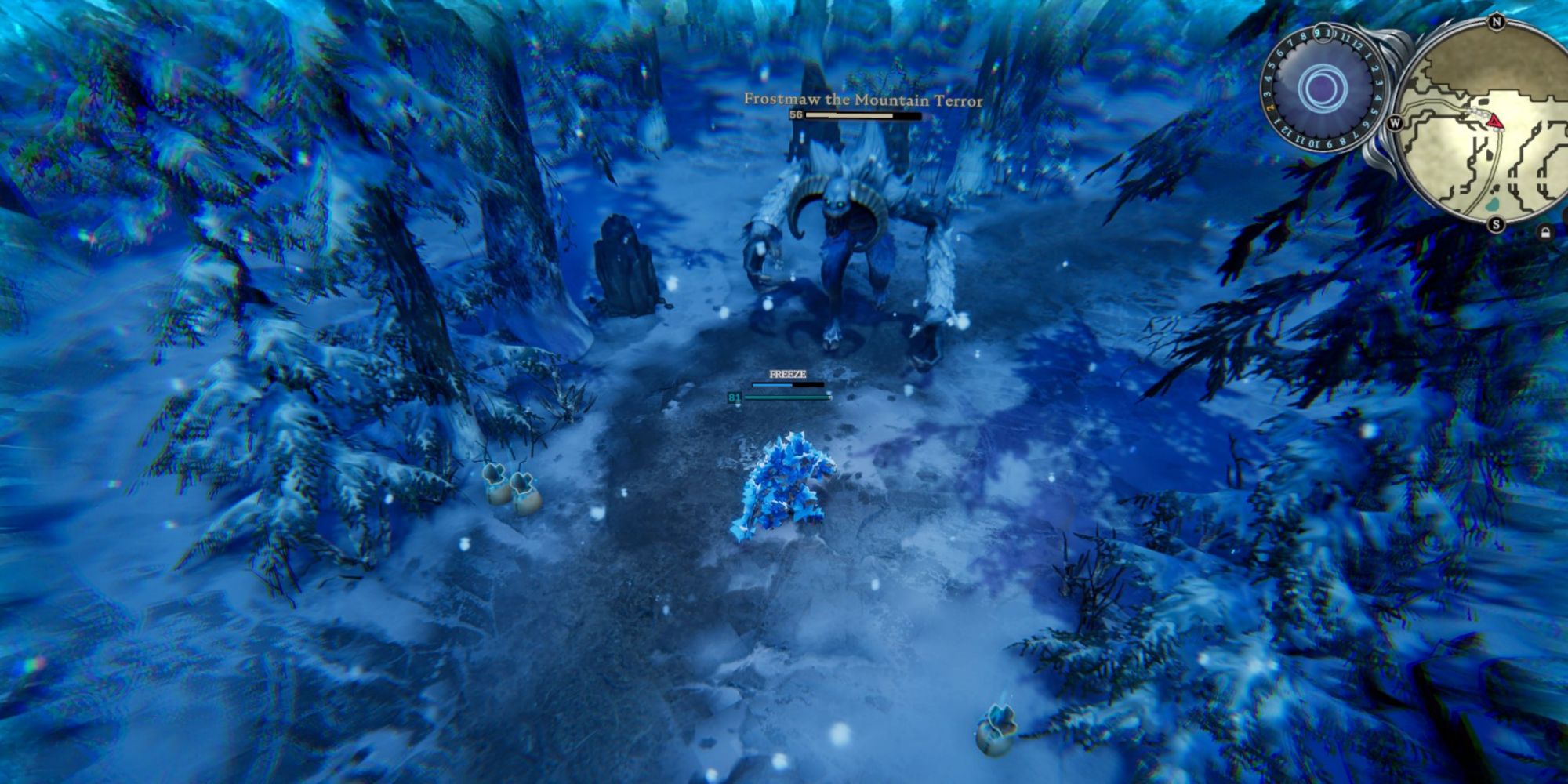 Frostmaw The Mountain Terror is a combat level 56 encounter and is considered a tough fight. He has some very impactful abilities that you should be aware of, and he also possesses a high health pool. His first ability is to throw three Frost Bolts. These will instantly Freeze you for a few seconds on contact, which can be extremely annoying. They are quite fast, so you may be unfortunate enough to be hit by one, especially as the boss will perform this move frequently throughout the fight.

Frostmaw deals heavy melee damage; he will use a ground slam attack that creates waves of ice around the epicenter. Using your Travel Ability should be enough to get you out of range, but like most of his abilities, it comes out quickly, so stay on your toes. Playing at range is the name of the game for Frostmaw, and you need to be cautious should you approach in melee. He will regularly perform some quick frontal slashes, that will deal a moderate amount of damage, so just try and move away for these, as preserving your health is crucial.

Frostmaw has another slam that will send you flying backwards upon contact. This can actually work in your favour, as you want to be at range anyway, although he will sometimes perform a dash prior to this, which can make your job of being away from him even more difficult. He moves quickly, and the large number of Freezes can mean he will catch up to you very quickly. 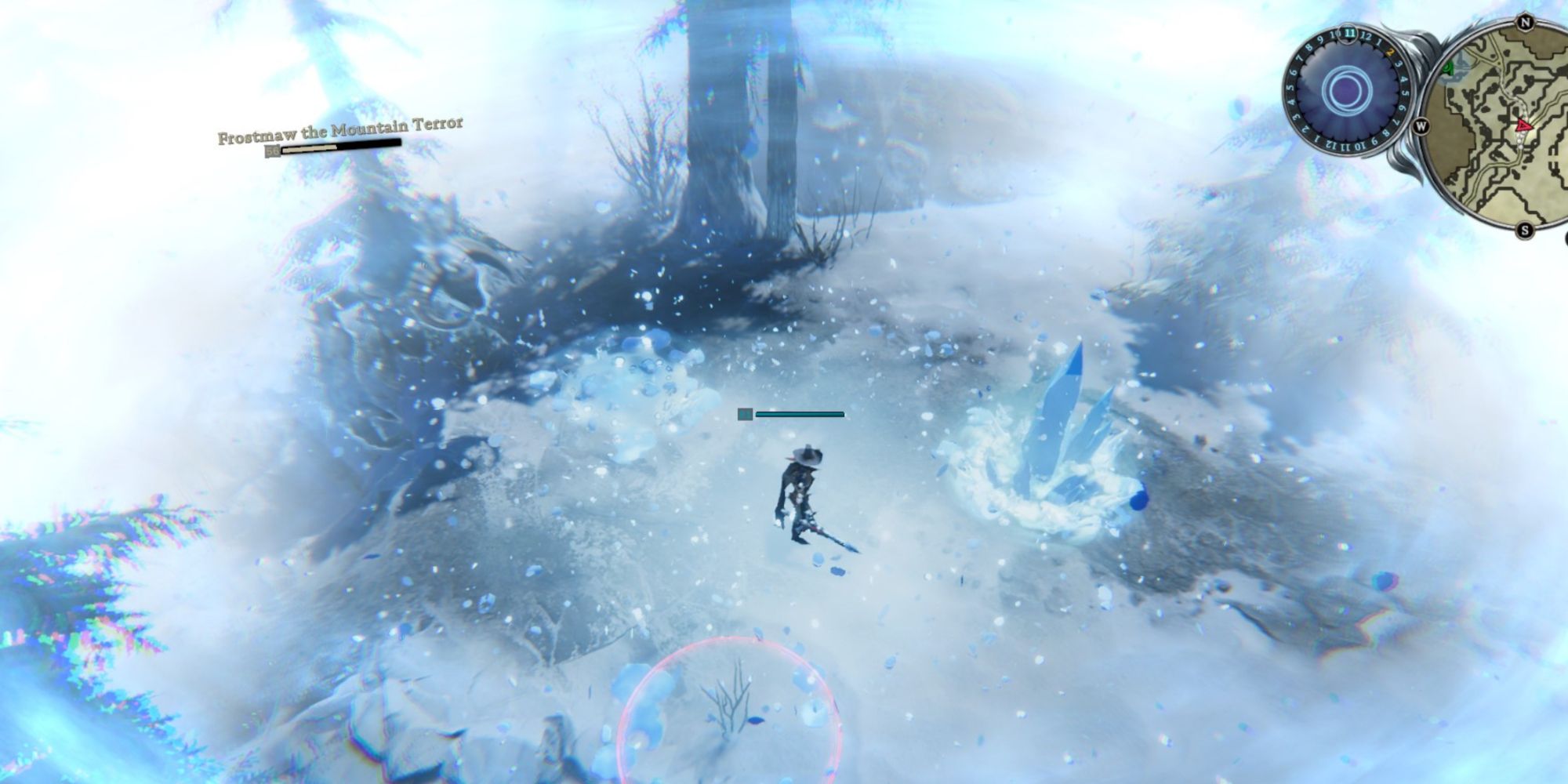 Frostmaw's Ultimate attack is to turn the immediate area into a raging blizzard, obscuring your vision. He will then proceed to run around, summoning Ice Spikes from the floor in random locations. There will be multiple up at any one time, and they will Freeze you upon contact. He will continue to use a couple of his basic melee swings, but will otherwise attempt to hide at the edge of the blizzard. The safest option is to try and kite, as the increased boss movement can make him hard to hit with skill shots, and you should try to focus on dodging the Ice Spikes above all else.

Upon exiting the blizzard and during low health percentages, Frostmaw will perform a frontal Ice Beam that sweeps around from his left to right in a 180-degree arc. Again, this will Freeze you on contact, so try to get behind the boss as quickly as possible, so you can both dodge and get some free damage in.

This fight is tough, and you will probably want to change your spell set up for him. Chaos Volley should be kept for damage, but bringing a shield spell such as Ward of the Damned will be very handy, as it can allow you to completely nullify his Frost Bolts and generate some chip damage through the spawned minions. A Merciless Iron Spear will do good damage to Frostmaw, as he is a Creature, and can allow you to stay slightly further away than other melee weapons. Merciless Hollowfang Armour and Scholar Blood are your standard picks, and try to bring some Vermin Salves for some extra healing. Sanguine Coil can be considered if you are really struggling. 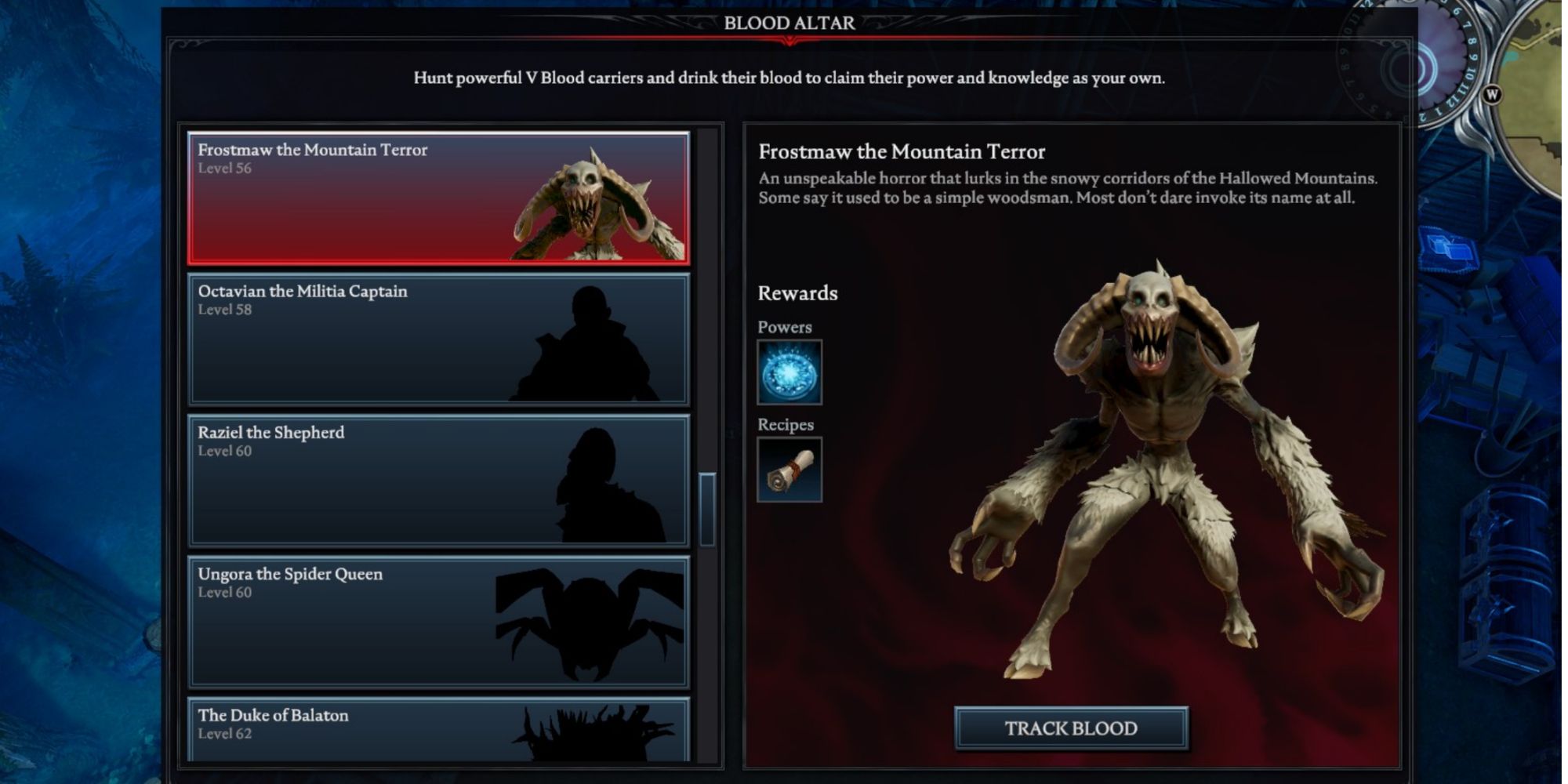 Frostmaw The Mountain Terror only grants you two rewards, but both of them are useful. His first one is the Ice Nova Vampire Power, an exceptional tool when combined with another Frost spell, this will deal damage in an AoE, and Freeze any enemy that is already afflicted by Chill for five seconds (halved for enemy Vampire players) and apply Chill upon hit. This can synergise very nicely with spells such as Frost Bat and is great for both PvE and PvP environments. Crowd Control is premium in a PvP duel, and the low cooldown Freezes can easily turn the tables in your favour. The damage is not amazing by itself, but the control the spell can grant can also be a lifesaver if you are surrounded by a horde of enemies in PvE.

Frostmaw's second reward is the Scroll recipe, which can be crafted at the Paper Press structure. This does require learning the technology from the Study, but you will most likely have this by now. Crafting a Scroll costs 12 Gem Dust and four Paper, and they can be spent as currency to learn new technologies within the Study itself. They are very useful and can be a great way of acquiring some stronger gear, as otherwise you will have to randomly loot the recipe from out in the world, which can require some serious grinding. While Frostmaw is not a mandatory boss by any means, both rewards are worth getting and can save you time in the long run.