Steam is enormous, and growing more so by the day. And that presents a problem: How the hell do you find anything that isn’t already on your radar? It’s less a needle in a haystack, more a needle in a hayfield—and that’s after Valve tried to solve the problem once already, with 2014’s Discovery Update.

Five years later, it’s time to try again. This time, Valve’s approach is a bit more advanced—and a bit more scattershot. Under the umbrella of Steam Labs, Valve’s rolling out three new experiments that should hopefully streamline the discovery process and help you find the odd diamond among Steam’s 30,000 game library.

“Behind the scenes at Steam, we create many experimental features with codenames like The Peabody Recommender and Organize Your Steam Library Using Morse Code. For the first time, we’re giving these works-in-progress a home called Steam Labs, where you can interact with them, tell us whether you think they’re worth pursuing further, and if so, share your thoughts on how they should evolve.”

That’s how today’s announcement starts, and no, that Morse Code sorting technique isn’t real—or at least, it’s not part of this initial batch of experiments. The three debuting alongside Steam Labs are dubbed “Micro Trailers,” “The Automated Show,” and “The Interactive Recommender.” Keep in mind that I haven’t seen any of these in action yet, and am relying on Valve’s (fairly perfunctory) descriptions.

So, Micro Trailers. Of the three Steam Labs experiments, this is probably the most self-explanatory. Valve’s scraped a bunch of trailers for six-second clips, the titular Micro Trailers, and “arranged [the trailers] on a page so you can digest them all at a glance.” 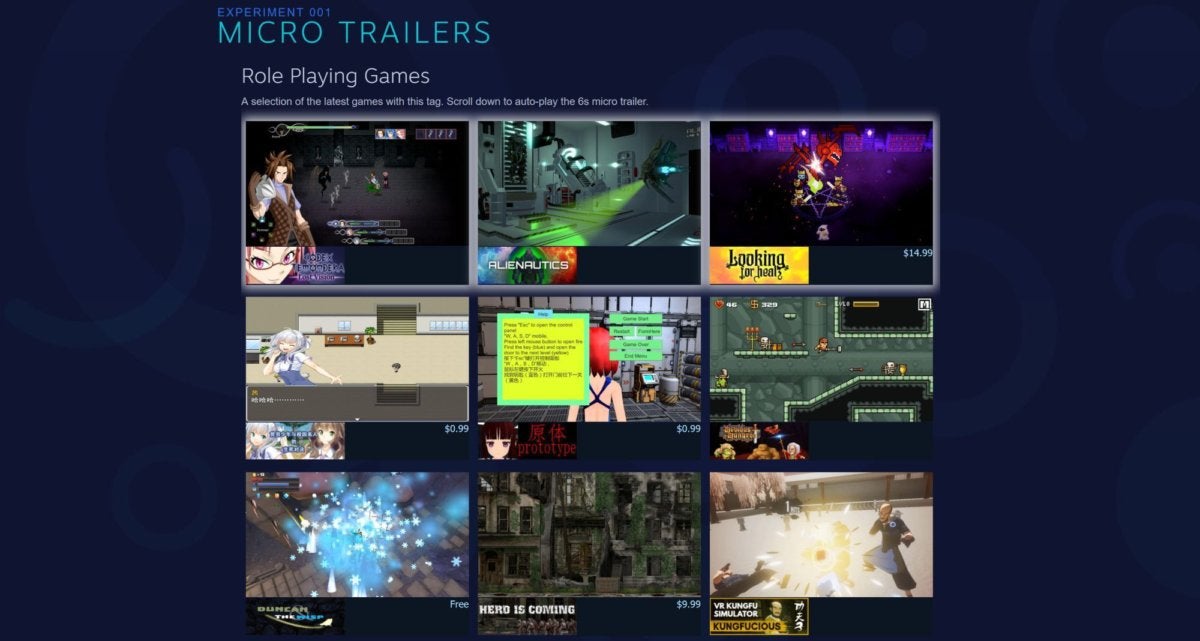 What’s unclear from this description is how large the pool of Micro Trailers is, and how automated the process. Micro Trailers are broken down by genre—“adventure games, RPGs, builders, and more” according to the description—but whether Valve reached out to specific high-profile games and developers for highlight clips, snipped clips internally, or let an algorithm handle it, I’m not sure.

It sounds neat though. Developers have enlisted similar tactics to great effect on Twitter and Reddit, using flashy GIFs to sell games like Clustertruck and Falcon Age. A good GIF doesn’t always mean a great game, but it’s an interesting way to window browse and see what catches your eye. 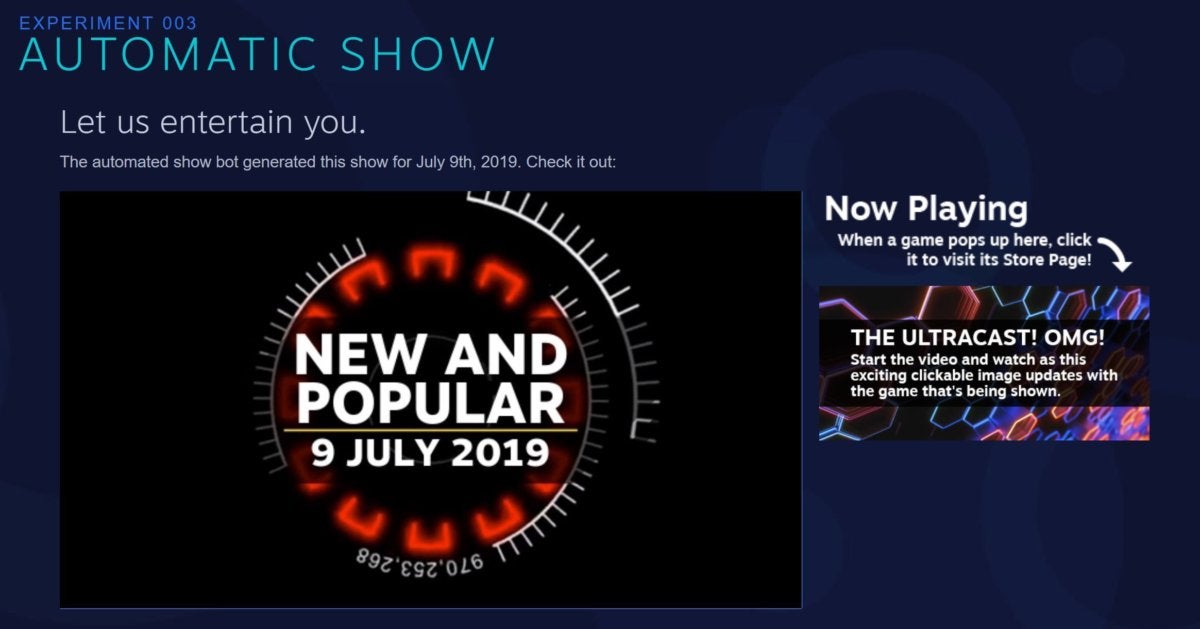 The Automated Show is also pretty simple to explain, though I admit that of the three it’s the one I’m least interested in. Described as a “half-hour video featuring the latest Steam launches,” I have to assume it’s automatically scraping trailers (or parts of trailers) from either the Popular New Releases or New Releases tabs on the store, then playing them back for you in order.

Given the heaping piles of shovelware released on Steam these days, sitting through half an hour of even the Popular New Releases sounds pretty tedious. And if it’s just a firehose of New Releases, without even accounting for popularity or some minimum quality standard? That sounds like a nightmare. In any case, I can’t imagine it’s more efficient than simply going to Steam and clicking on the games that sound even marginally interesting, watching two seconds of trailer footage, and closing out of the ones you aren’t.

Welcome to the machine

The Interactive Recommender is Valve’s biggest play though, a replacement for the current Discovery system that sounds—at least on paper—significantly smarter and more adaptable. “While existing store features like tag-based searching can work well, we think we can do better,” writes Valve. 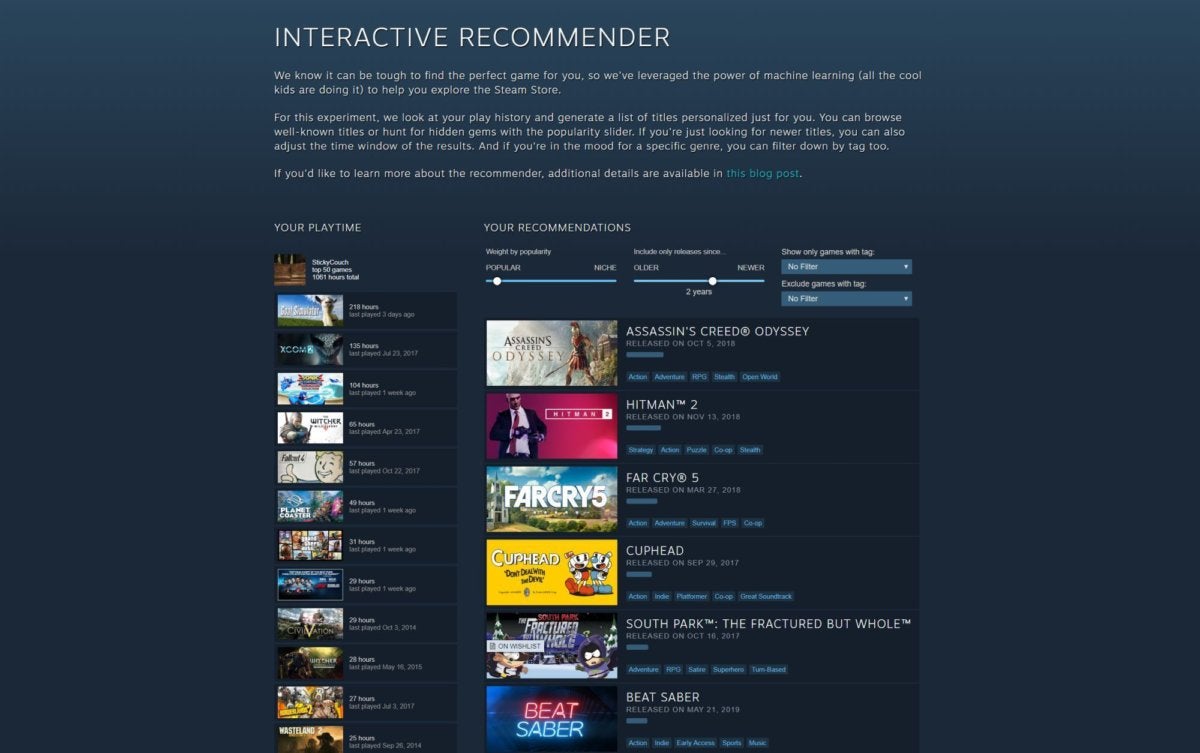 And I certainly hope so. The current Discovery system is better than nothing, but in my experience recommendations tend to fall into two categories, either serving up the top-selling games on Steam or playing it really safe. Valve remarks on the latter, noting that “Just because you play a lot of Beat Saber, doesn’t mean we should only ever recommend you VR rhythm games.” That is sort-of how Discovery shakes out though.

Valve’s new Interactive Recommender instead draws connections based on players, not games.

“This model takes a different approach. It disregards most of the usual data about a game, like genre or price point. Instead, it looks at what games you play and what games other people play, then makes informed suggestions based on the decisions of other people playing games on Steam. The idea is that if players with broadly similar play habits to you also tend to play another game you haven’t tried yet, then that game is likely to be a good recommendation for you.”

That’s the gist of it. There’s more detail in Valve’s announcement, discussions of neural networks and machine learning, but basically the Interactive Recommender will suggest games that aren’t necessarily similar to the ones in your library, but are found in libraries similar to yours.

You’re also able to filter its recommendations, which is intriguing. You can sort by tag of course, and by release date. However you can also sort by what Valve’s calling “Popularity.” Via Valve:

“We chose ‘popularity,’ but you could also think of it as ‘mainstream-ness.’ One person wants to know the newest and most popular games around, and the next person wants the opposite: games that are interesting and relevant but not necessarily well-known. We think this tool will be helpful to those on both ends of that spectrum.”

It sounds interesting. I have a fairly large Steam library, and doubtless play more niche games than the average person. That said, I’ll be curious what recommendations the new tool serves up, and whether it at all addresses the feeling that amazing indie games are getting lost in the shuffle these days.

It’s worth noting also that while I called the Interactive Recommender a replacement for the Discovery system, Valve sees it as additive—for one reason in particular. “New games in a system such as this one have a chicken-and-egg effect known as the ‘cold start’ problem” writes Valve. “The model can’t recommend games that don’t have players yet, because it has no data about them.” Thus the Discovery Queue will still be the place to find the newest games—or the new Automated Show, if you’ve got the patience.

Interesting ideas, all of them. Perhaps what’s most interesting about today’s announcement though is Valve’s caution. Valve’s often been criticized for implementing big ideas without soliciting feedback first. Hell, it just happened last month, as poorly explained details regarding the latest Summer Sale led to widespread Wishlist purges and raised the ire of developers.

Maybe Valve’s got it right for once though. From the announcement: “Rather than introducing a big change to the way customized recommendations are determined on Steam, we’re introducing this new recommender as an experiment customers can seek out and try. This will help us get better usage data while avoiding any sudden shifts that we know can be frustrating for customers and developers who are accustomed to Steam.”

It’s a surprisingly responsible approach, and one I hope pans out. I could certainly use a few more rafts to survive the flood that is Steam these days.