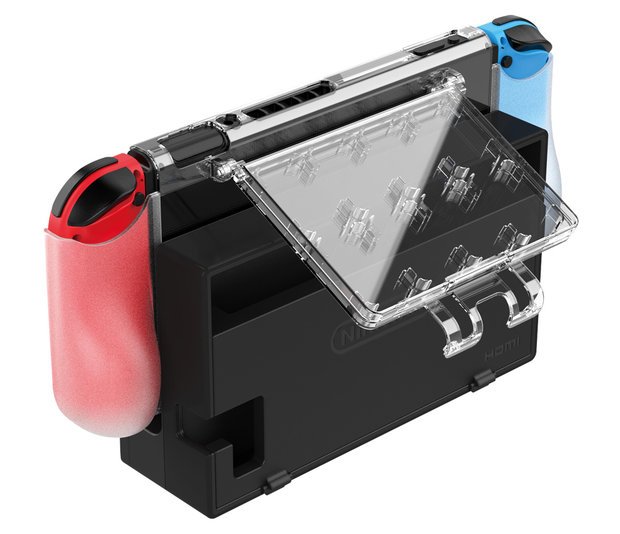 On the rear of the case is a cartridge holder which has enough space for eight physical Switch games.

With the Switch’s hybrid nature, it can be tricky to find a case that you don’t need to remove when docking the console, but the Venom Protective Shell case performs admirably with one caveat.

While the console with joy-cons can be docked (and the controllers detached with ease), the rear of the case has to be flipped up to allow it to fit.

This is a minor inconvenience, but it does leave the Switch looking a little odd when sat in the dock, the case’s handles empty on each side and then a raft of cartridges sticking upwards from the top.

While detachable joy-con handles would likely compromise the case’s protection, it would have been nice for the cartridge case to have been detachable – especially since to store it flush to the console (in a way that prevents the Switch being docked) requires clicking it into place under the console’s screen which can be fiddly.

The case also includes a screen wipe and a tempered glass screen protector and retails for around £12.99.

It’s an excellent value proposition, and those that play predominantly in handheld mode are likely to find little to complain about. Unfortunately, while the cartridge storage is a nice idea, making it detachable would have made a huge difference to the case’s general usability when docked.