The timeline in Victoria 3 coincides with a period of growth and change for the United States. For this reason, they're one of the most exciting playable nations in the game. While they start the game preoccupied with internal conflicts and a race for territory against Mexico, once the USA's affairs are in order they have more than enough resources to exert their influence across the globe.

This guide will give you all the tips you need to stabilize the United States from their starting position, achieve dominance over the Americas, and become the leading global power!

How To Quickly Abolish Slavery 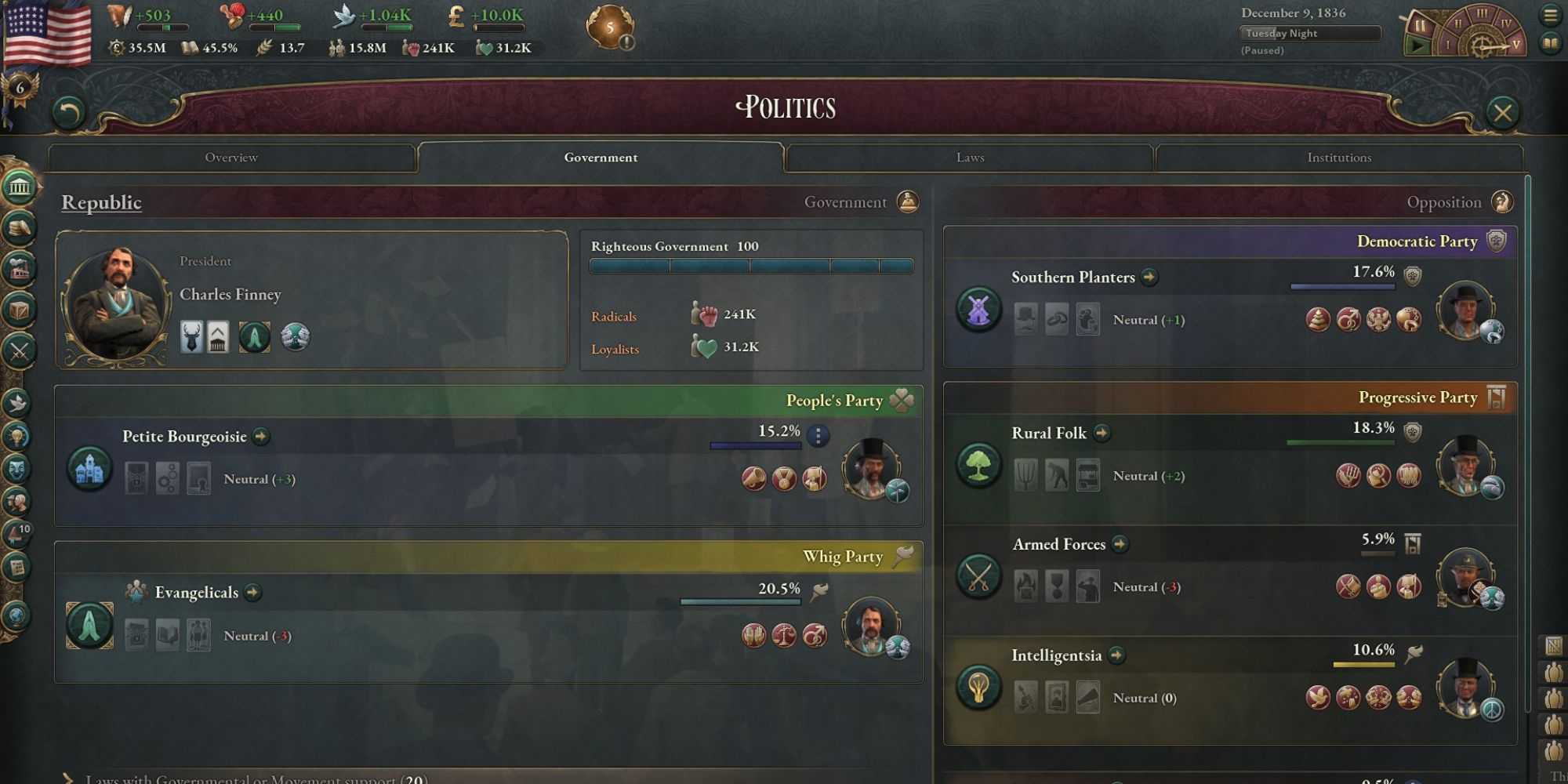 At the start of the game in 1836, the United States and the Ottoman Empire are the only Great Powers that are still using slave labor. Your first priority as a USA player is to abolish slavery as quickly as possible. Doing so hampers the political power of the Southern Gentry, paving the way for further reforms.

Before unpausing a new campaign, the first thing you should do is suppress the Southern Gentry. This gradually reduces their Clout for an investment of one hundred Authority. The less power the Gentry have, the weaker any potential Confederate uprising will be.

Second, change your Law Enforcement policy from Local Police to Dedicated Police Force. Local Police gives the Gentry a bonus to political power, so getting rid of it quickly robs them of a weapon.

While you're weakening the Southern Gentry, focus on building up your economy and military, especially in the northeast. Barracks in New England, New York, and Pennsylvania will reduce your reliance on conscripts in the event of a Civil War, and can be put to use against Mexico as well.

Don't invest in any of the southern states until slavery is abolished and the threat of secession is gone. In particular, avoid expanding plantations or military buildings in the south.

By continuing to reduce the power of the Southern Gentry, and installing Abolitionists at the head of interest groups through event decisions, you should be able to propose and pass Abolition sometime in the 1840s. If a secession movement starts as a result, don't worry too much – a weak Gentry will often back down.

If the Civil War does happen, you should have little trouble defeating the Confederacy unless they're able to sway a Great Power to help. Keep good relations with France or Russia to have a dependable ally in case Britain or another Great Power backs the rebels.

How To Expand As The United States 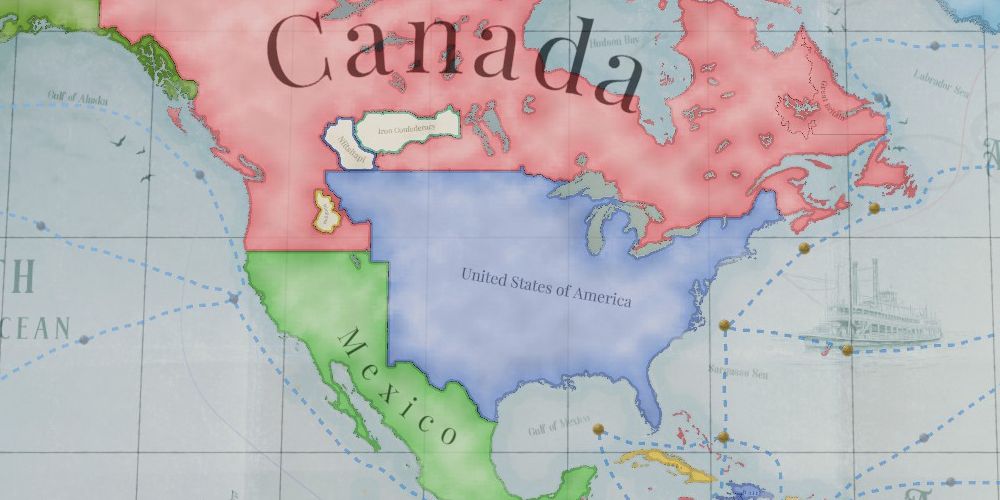 For the first part of the game, your primary rival will be Mexico. In most campaigns, they'll be weaker than the USA militarily, especially after you build a few Barracks on the Great Plains. Make frequent Diplomatic Plays to annex territory from them, especially split states like Texas and Colorado.

Before unpausing in 1836, use the Diplomacy tab to improve relations with the Republic of Texas. If their attitude toward the US hits twenty before they're conquered by Mexico, they'll join the Union via an event.

In between wars with Mexico, you can easily expand your influence in Central and South America. Europe will rarely intervene if you puppet smaller countries like Guatemala or Costa Rica, and doing so can give you access to tropical resources like Dyes and Rubber. Puppeting countries also lets you annex them later via a Diplomatic Play, which is an efficient way to unlock the Star-Swarmed Banner Achievement.

Keep an eye on the Decisions Tab in the Journal – the United States can take several decisions that grant them territory or claims, reducing the Infamy they gain from conquest within their sphere of influence. After surveying Panama, you can also choose to get a claim on the region instead of purchasing it from New Granada.

The Panama Canal must be subsidized when built – since it doesn't generate any profits, it won't be able to offer wages without government cash.

It's worth always having at least one of the European Great Powers on your side. America is powerful enough to handle just about any country in the Western Hemisphere – save for a Britain-backed Canada – but if your targets get outside help you'll need to even the odds. As stated before, France and Russia make ideal allies; if Russia is in debt, you can also negotiate the Alaska Purchase to score some sources of Gold and Oil!

How To Get The Most Out Of New York 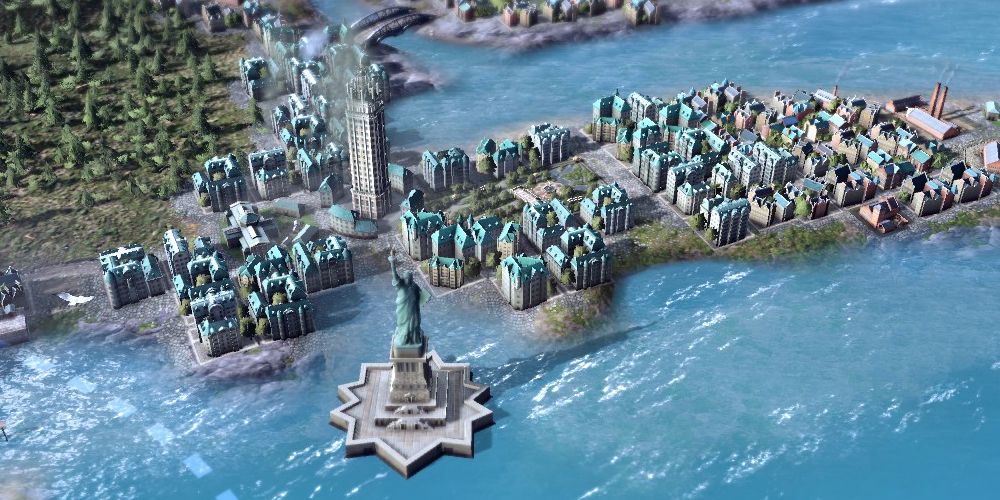 Any campaign as the United States requires that special attention be paid to New York. Not only is it your most populous state, but it also has several unique features that make it the rival of London and Paris!

Like much of the northeast, New York has the American Chestnut Forests modifier, which increases production of Hardwood by twenty percent. This makes Logging Camps a profitable venture in the area. It also possesses Niagara Falls, which provides an identical production bonus to Electricity. Concentrate your Power Plants in the Empire State once they're available!

New York Harbor enhances Shipyards, Ports, and Naval Bases in the state, making it a key trade and naval center. Focus your shipbuilding here, and always ensure that New York's Ports and Naval Bases are at the maximum level your technology allows.

Don't worry too much about overexpanding New York – the state's population is large enough to support almost anything you can conceivably build there, and will grow continuously throughout the campaign.

New York will almost always be chosen as your first Skyscraper Site after you survey for one. Skyscrapers increase the effectiveness of Government Administration, so New York can serve as a bureaucratic center alongside Washington, DC (the White House provides less of a bonus, but is in place at the start of the game).

Lastly, the Statue of Liberty increases the Migration Attraction of New York by twenty-five percent once completed. Its large Urban and Trade Centers will already make the state a major draw, but once Lady Liberty raises her torch you'll start to see New York's population skyrocket. Switch to Multiculturalism, Universal Suffrage, and Women's Suffrage as soon as you can to take full advantage of this.