Riven Mods are one of the most confusing systems in Warframe. Players receive one after completing the War Within quest with no context of what they are, how they work, or why you’d ever want to use them.

While tied to layers of RNG, these Mods can provide an immense damage increase to your favorite weapons. If you love a weapon that can’t quite hang in level 100+ content, a good Riven Mod can fix most of your damage-scaling issues. This guide will go over what Riven Mods are, how they work, how to reroll them, and covers a few basic strategies for obtaining Kuva—the currency needed to reroll these strange Mods.

What Is A Riven Mod? 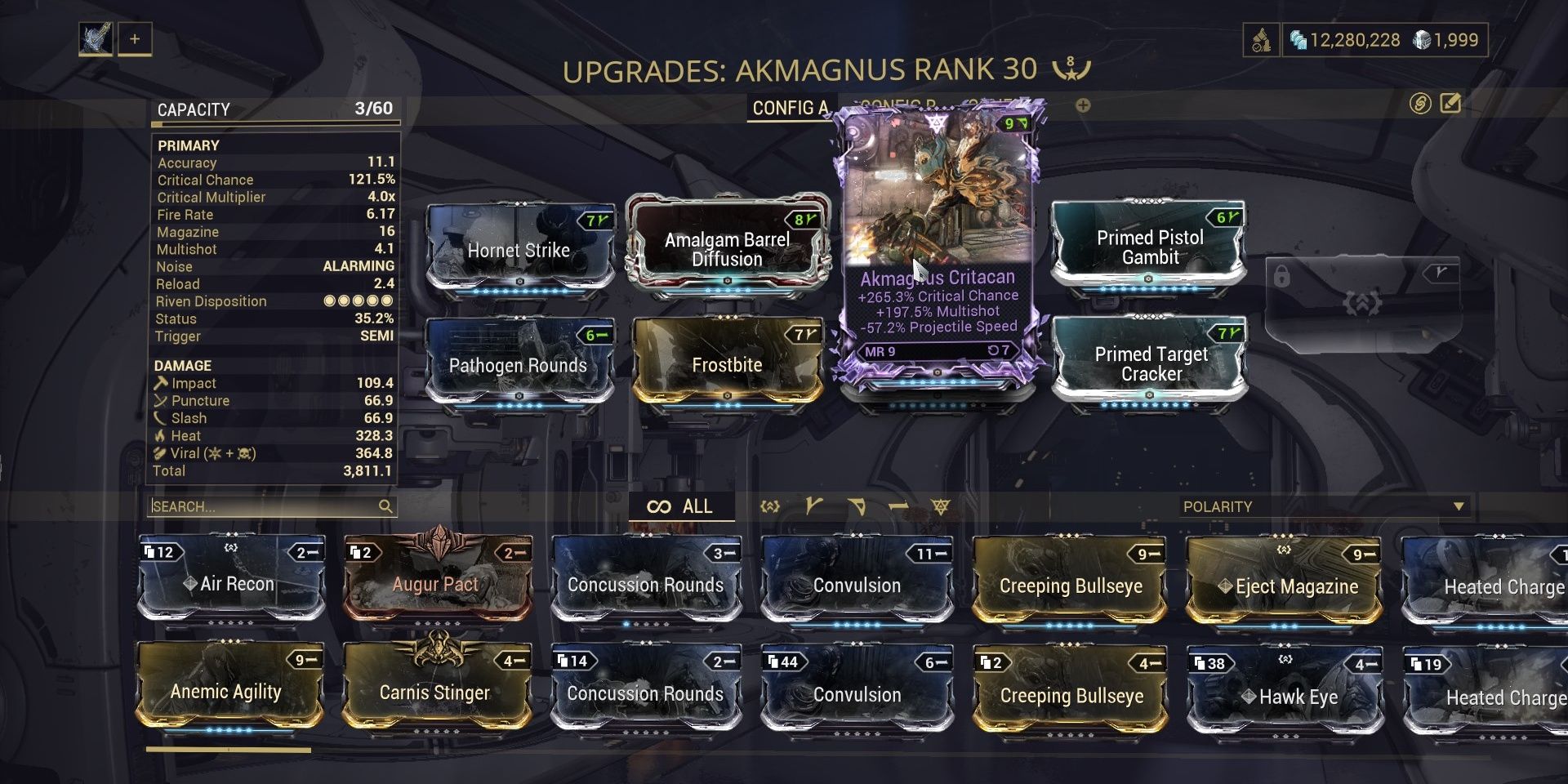 Before you can use a Riven, you must unveil it by completing a challenge listed on the Mod card. This can range from killing enemies to catching multiple fish in a row without missing. Once a card is unveiled, you’ll be given a Riven Mod with a whole host of randomly rolled stats.

If that seems like a lot of RNG, that’s because it is. The probability of rolling a perfect Riven Mod for your favorite weapon is hard to even imagine. Should you get a Riven Mod for a weapon family you enjoy using, you can invest a resource named Kuva into your Riven Mods for a chance of rolling a stat you desire. We’ll go over rerolling Rivens later in the guide. For now, keep in mind that you can change the positive and negative traits on your Riven Mod through the process of rerolling it.

Why Use Riven Mods? 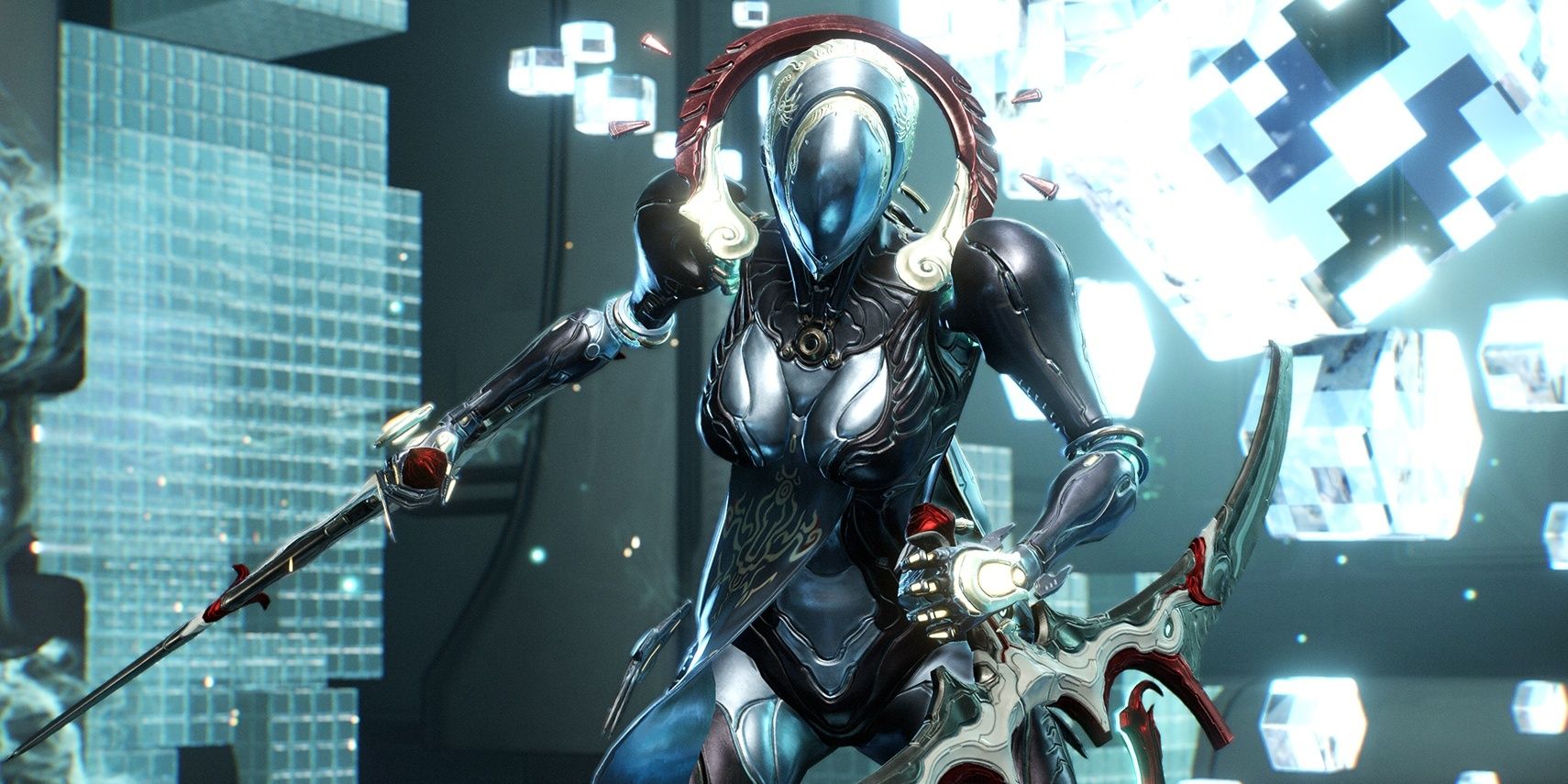 While the RNG tied to Riven Mods is nothing short of astounding, these Mods provide a degree of power that is simply unrivaled. For example, these Mods can roll with base damage, multishot, and critical damage at the same time—each with stat percentages that rival the likes of their standalone counterparts.

Needless to say, Riven Mods can turn a great weapon into a meta contender. However, this power is kept in check by two things: the sheer RNG of the system and Riven Disposition. 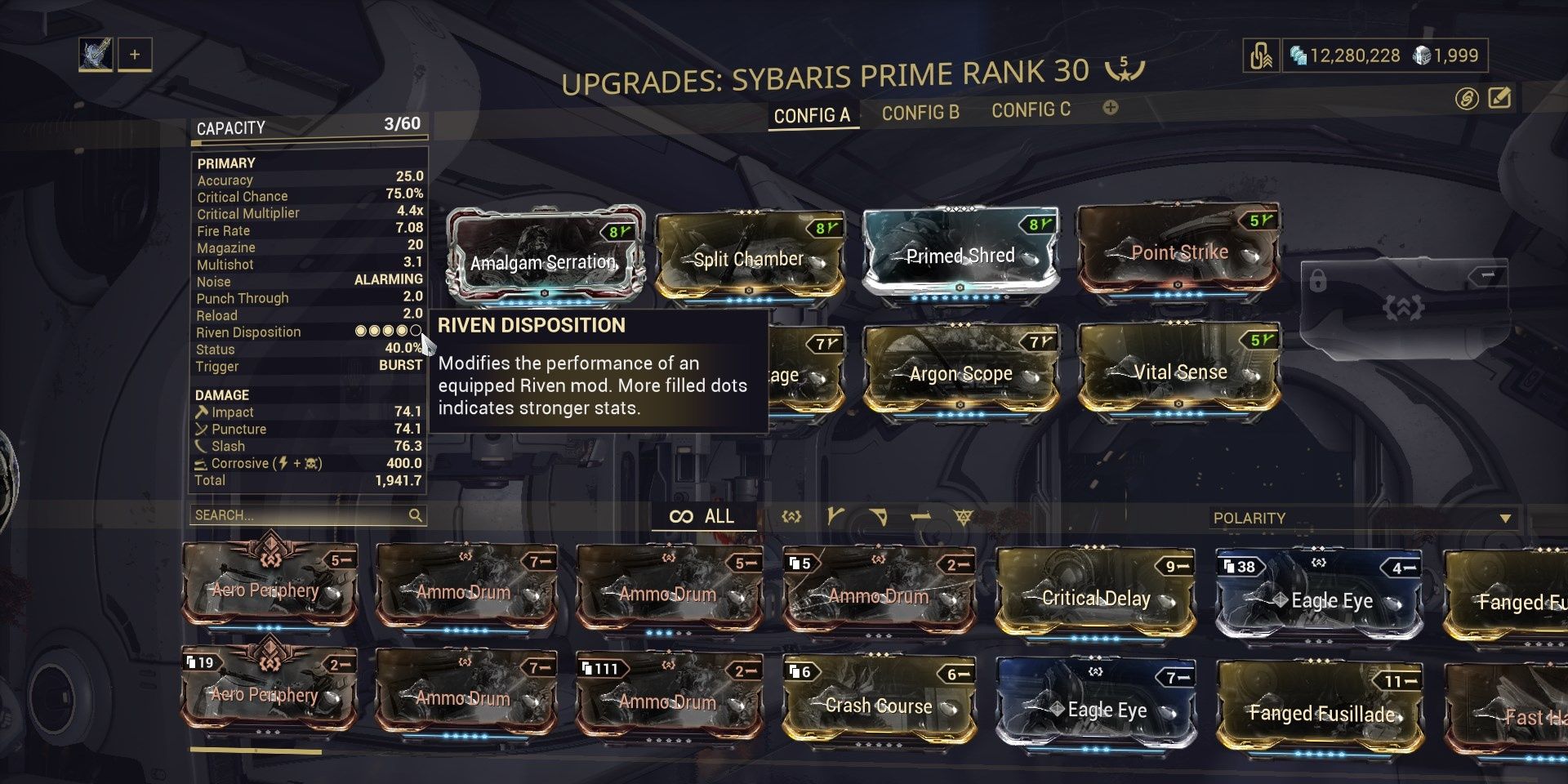 Riven Dispositions have a scale of 0.5 to 1.55, denoted by circles in-game. The stats on your Riven Mod are multiplied by this Riven Disposition constant, values under 1 causing the mod to lose its strength. If your weapon’s Disposition has three or more filled circles, its Rivens are at normal or greater strength. If your weapon has one or two filled circles, your Riven Mods won’t be as good as normal.

Note: Riven Dispositions are per weapon, not family! A Boltor and Boltor Prime can use the same Riven, but the Riven Disposition between the two weapons will vary. In general, variants of a weapon family have lower Dispositions than their default counterpart.

How To Obtain Riven Mods 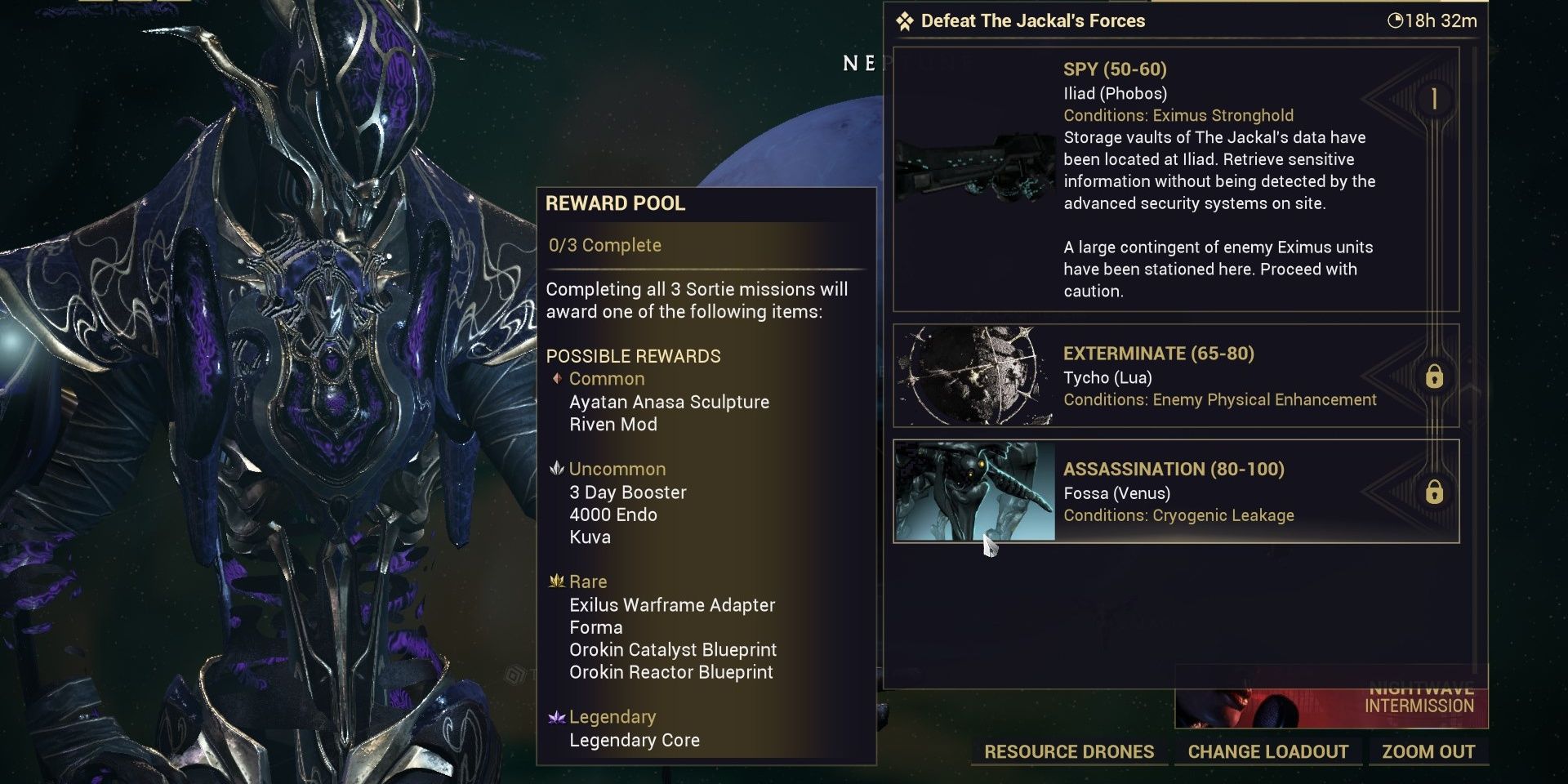 You can obtain Riven Mods from the following sources:

Excluding Alerts, the best means of earning Riven Mods is by completing the daily Sortie. The last Sortie mission has a small chance of granting a Riven Mod upon completion. Beyond that, check Teshin’s stock at any Relay to see if he’s selling any Rivens for Steel Essence, a currency tied to the Steel Path.

It’s also worth noting that you can purchase Rivens from other players through Warframe’s trading system. Finding a specific Riven through trade chat can be a nightmare, so most players use third-party websites such as warframe.market to find Rivens with stats they’re interested in. Due to the sheer RNG of this system, don’t be surprised if some players are asking for thousands of Platinum for their Rivens. 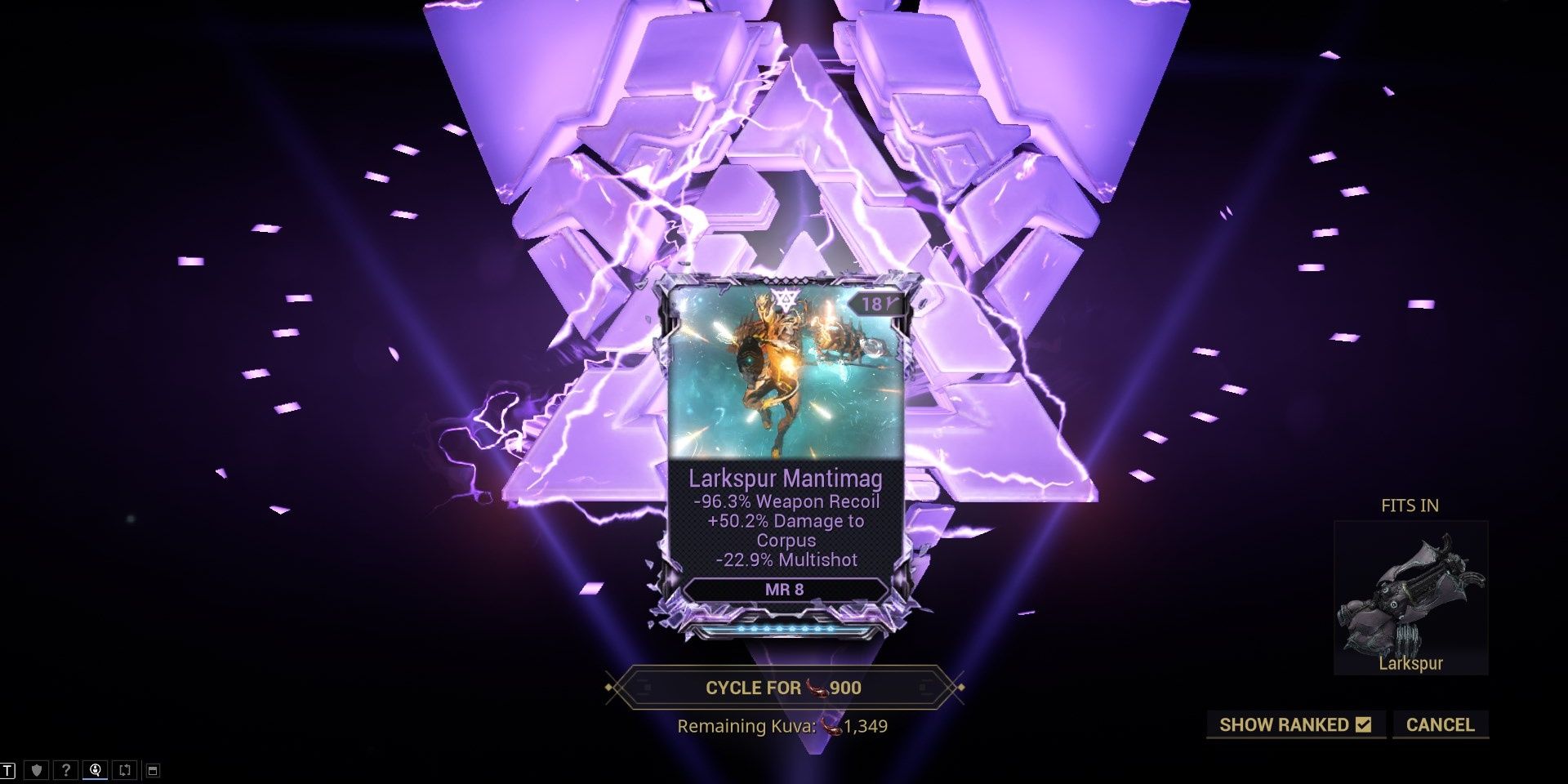 While it’s referenced as “cycling” in-game, nearly every player refers to this system as Riven rerolling. By spending a rare resource named Kuva, you can reroll the positive and negative traits tied to your Riven Mod, keeping the weapon family, polarity, and Mastery Rank requirement the same. 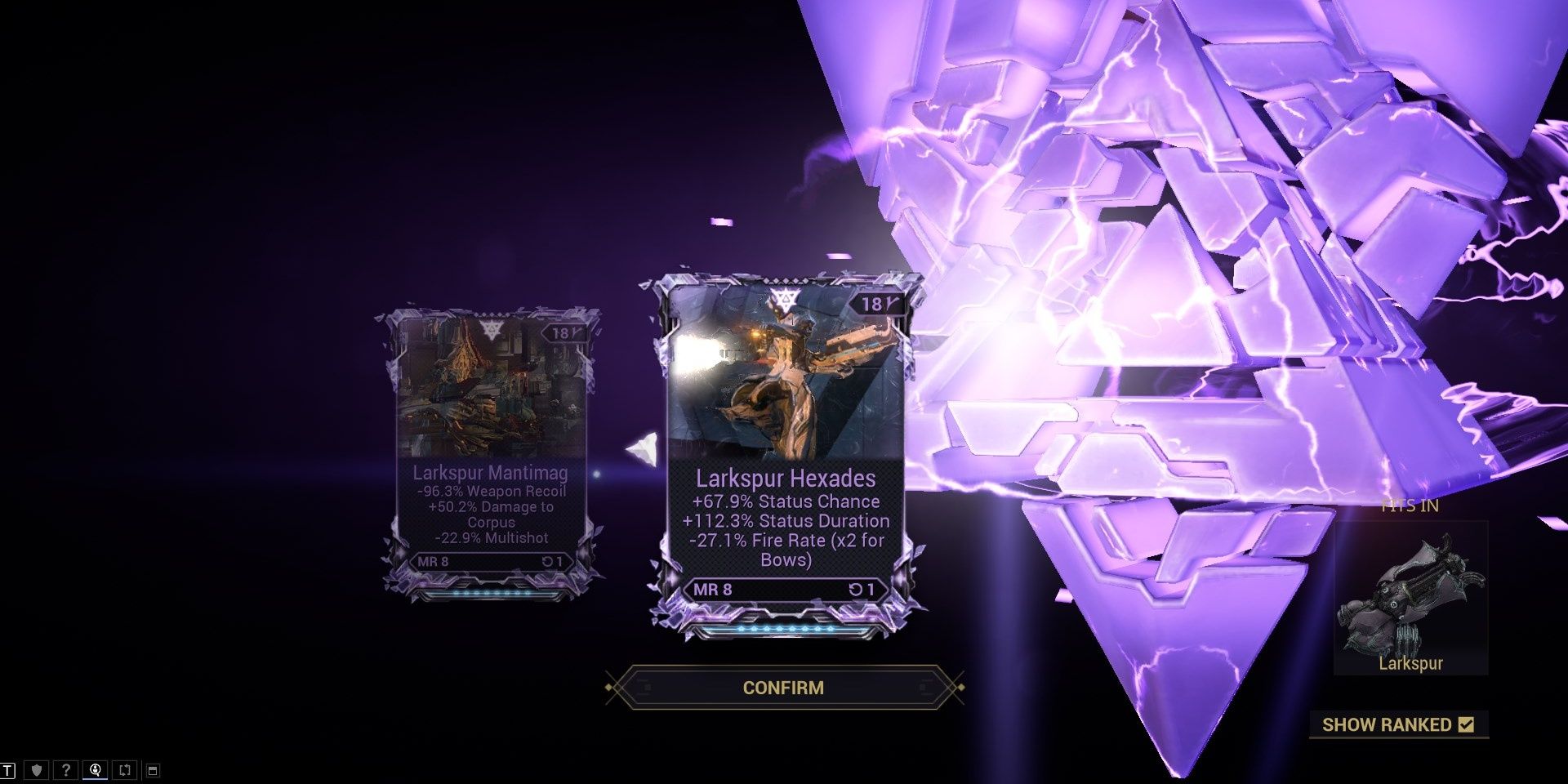 When you reroll a Riven, you’ll be given the choice of either taking the new roll or keeping your old one. This is as far as the system extends for progression. There are no ways to lock in traits, maximize stat percentages, or use Kuva to target farm a certain stat. It’s complete RNG.

The first ten rerolls on a Riven Mod will increase the Kuva cost on subsequent rolls. The cost for each roll is as follows:

All rolls following the tenth reroll will cost 3,500 Kuva. 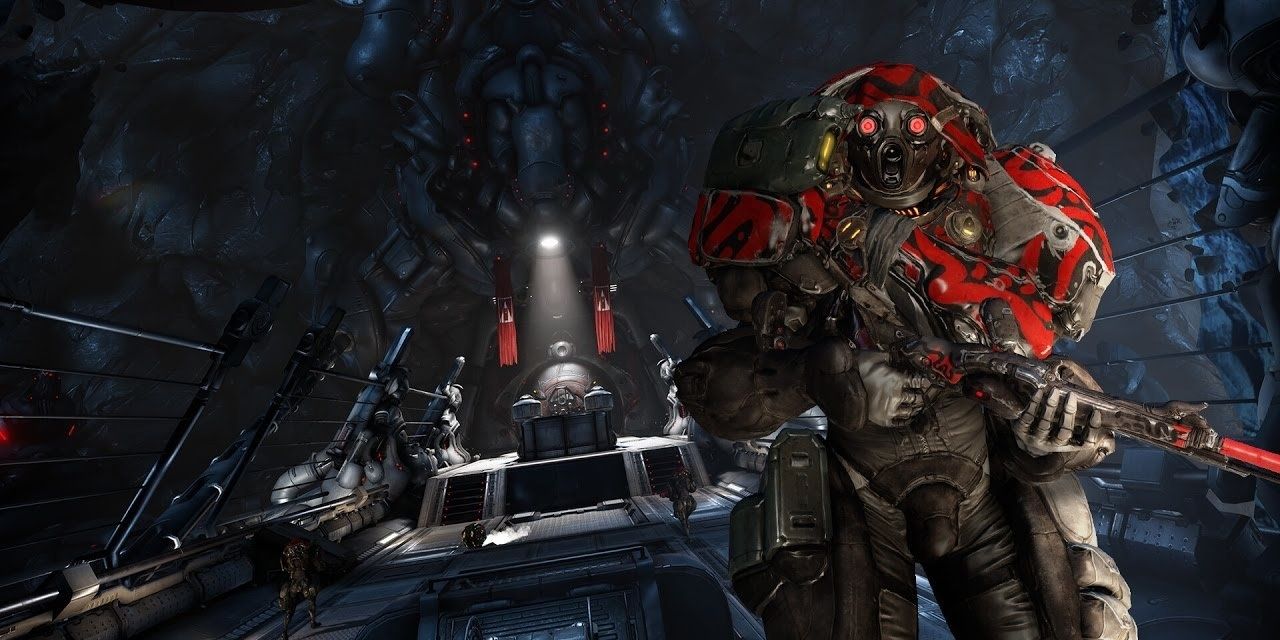 Digital Extremes have added quite a few ways of earning Kuva throughout the years, although most players stick to one or two farms to get as much Kuva as possible. The best sources of Kuva are Kuva Floods and Requiem Kuva Survival missions on the Kuva Fortress.

Every hour, one node on a planet near the Kuva Fortress will become a Kuva Flood, granting around 1,200 Kuva upon completion. These missions take a few minutes at most to complete. Complete the Flood, then see if the Kuva Fortress has a Kuva Survival Fissure mission. If so, hop in and crack as many Requiem Relics as possible to earn large bundles of Kuva every few minutes. You can farm Requiem Relics from Kuva Siphons and Kuva Liches if you don’t have any.

If you can handle the Steel Path, consider completing Teshin’s daily Steel Path missions. Each mission grants three Steel Essence, giving you 15 in total. You can then exchange that 15 Steel Essence for 10,000 Kuva by speaking to Teshin at any Relay.

Finally, if you decide to farm Kuva, be sure to purchase a Resource Booster. They don’t cost much Platinum and double the amount of Kuva you receive from Floods, Siphons, and Survival missions. Pair a booster with a Smeeta Kavat for a chance at earning four times as much Kuva as normal.