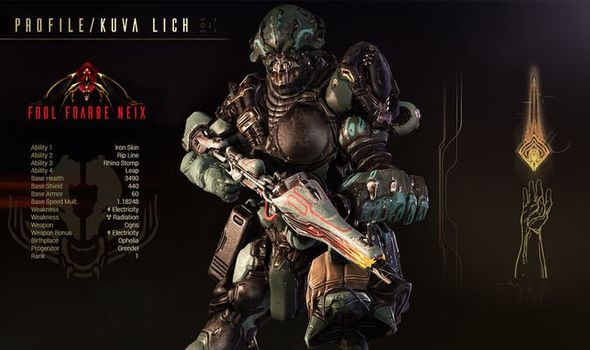 Warframe just got its next major update on PS4 and Xbox One, bringing the Old Blood expansion to consoles.

Warframe is free-to-play and continues to expand with new content on all platforms.

And this latest Warfame update provides plenty for fans to talk about and enjoy over the coming weeks.

The big part of the new patch is the launch of a new immortal villain, the Kuva Lich. Digital Extremes calls this their version of the Nemesis system.

Players will face off against a persistent enemy who poses a growing threat to their in-game existence, which doesn’t let up.

“To start their “relationship,” Tenno must hunt down a Grineer soldier spiked with Kuva (a mysterious red fluid coveted by Grineer Queens),” a message from Digital Extremes explains.

“By landing a killing blow, the Grineer soldier’s death triggers rebirth. In his or her regeneration, these Grineer return stronger, acquiring the specific Ability players used against them, gaining followers (i.e. soldiers), and developing even greater powers.

“They aren’t just ordinary enemies. Each time a Tenno beats this soldier, the Kuva Lich is assigned a randomly horrific (and sometimes funny) name, like Ogg Horr, Corelikk Airee, or even Gitt Bakk, like that one Beatles song.

“They have personalities. They deliver quippy dialogue to tease and coax players into their next confrontation. They’re given weaknesses, resistances, weapon types, weapon bonuses, their progenitor, a birthplace, and even personality quirks, like cowardice, bloodhound and paranoid qualities, which show up on their profile page.”

Another big of the new update is the launch of the 42nd Warframe, and the fourth this year (following Wisp, Hildryn, and Gauss), Grendel.

The new Warfame is available now and includes abilities such as Feast (eat an enemy or enemies, then spit them out covered in toxic bile); Nourish (take consumed enemies and nourish nearby squad members with a radial buff); Regurgitate (puke bile-soaked enemies as toxic projectiles); and Pulverize (after feeding, Grendel curls into a ball and sends any enemies in his path flying).

The new Warframe update should be under 4GB to download on PS4 and Xbox One, and should be available to install now.

Eligible gamers – MR 3+ and account created before the Legendary Core announcement on October 18th – 1x Legendary Core will be delivered in a separate Inbox message.

Digital Extremes says these criteria are necessary to avoid awarding dormant accounts that could use this gift to abuse trading.

Patch notes from today’s update can be found below, highlighting the new Warframe, Grendel.

NEW WARFRAME: GRENDEL
Consumer of worlds and everything else.

Swallow an enemy whole and store it in Grendel’s gut. Not satisfied? Keep eating, but beware, each foe in Grendel’s belly slowly consumes Energy. Hold to vomit out stored enemies covering them in toxic bile.

Consume the enemies in Grendel’s gut and nourish nearby squad members with a radial buff.

Violently puke out a bile soaked enemy from Grendel’s gut, turning the unfortunate creature into a toxic projectile.

Powered by feasting, Grendel curls into a ball and knocks over anyone in his path. Jumping slams Grendel into the ground and generates a damaging shockwave.

Grendel can be earned for free through means based on the lore of his Leverian entry. Once you’ve listened, you’ll begin your hunt for Grendel by acquiring:

These Keys are found in Arbitrations and will expose hidden missions on the planet mentioned in his Leverian for you. Grendel helps those in need – and only those who are truly ‘empty’ will earn his pieces, guaranteed.