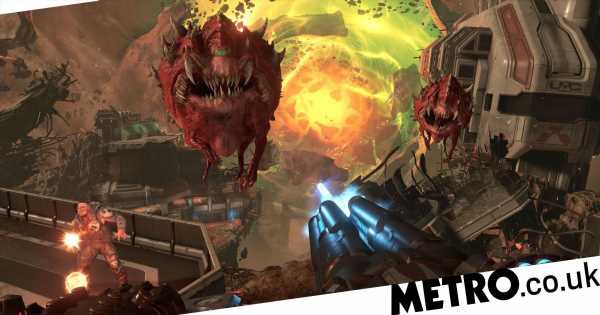 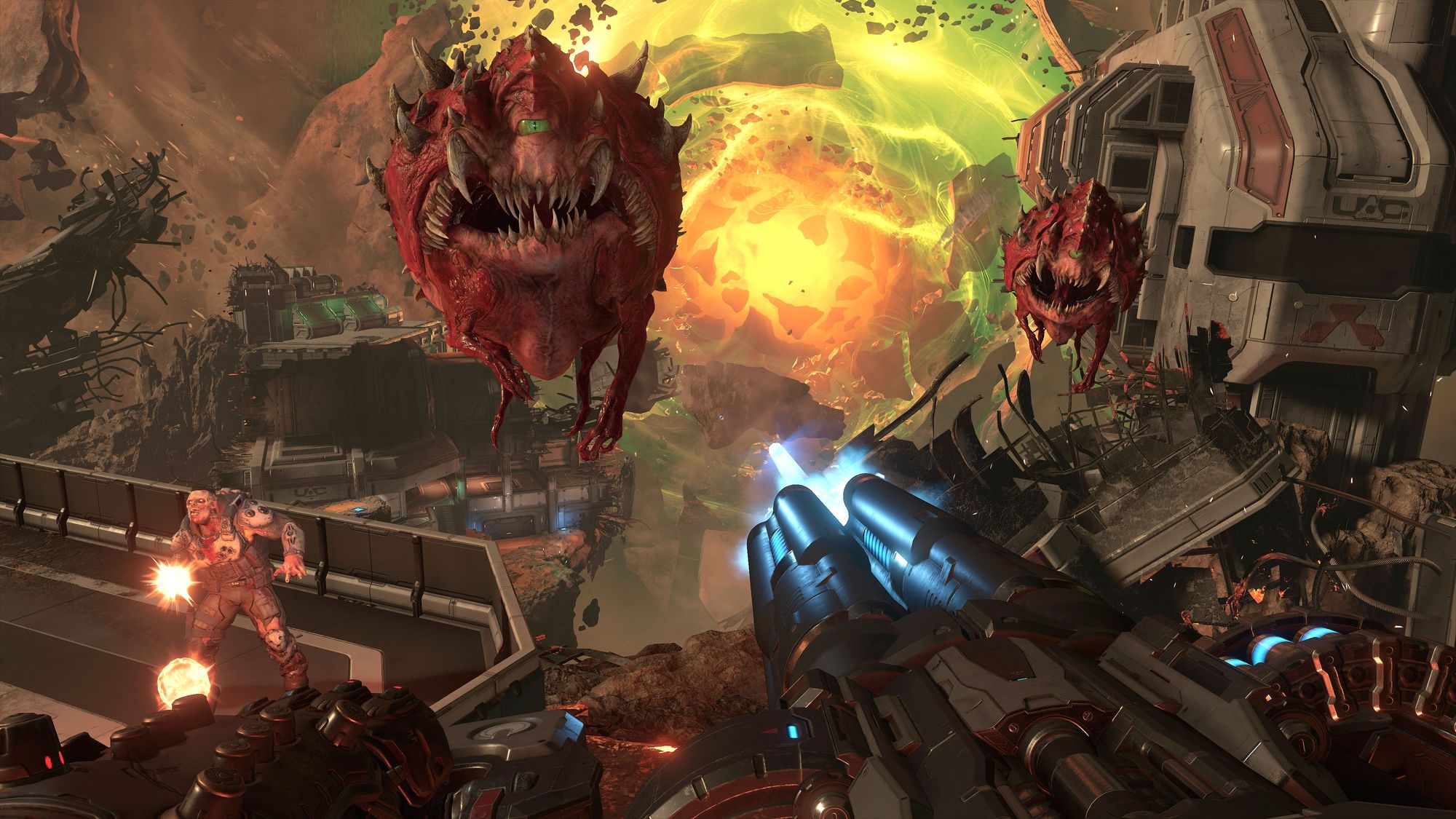 Readers discuss the video game opponents they most enjoy fighting, from Halo’s Covenant to slimes from Dragon Quest.

The subject for this week’s Hot Topic was suggested by reader Paulie, who asked which bad guys do you most relish and is it because of the combat, their back story, or their visual design? Or is it perhaps because their artificial intelligence offers a good challenge?

We had lots of different answers but one of the most common was the enemies of Halo, which will be encouraging for Microsoft with the new game coming up.

Rank and file
Doom has some great enemies if you ask me. All the ones from the original are super iconic and translate well to the new games. My absolute favourites are the Imp and the Cacodemon, since as well as looking cool they have that important element any good enemy needs: they’re fun to shoot.

Even with the basic, two frame animation of the originals there’s just some something really satisfying about the sound effects and the graphics when you down one and while those games should be just as dated as Wolfenstein 3D they’re still really playable because the gunplay is still solid.

The bosses in Doom are just bullet sponges, which makes them less interesting, but I think the rank and file of the game are probably the best in any franchise. I know and recognise them all and never get bored of filling them with lead.
Scoots

Why so shy?
The Mario series has lots of great bad guys, and I’m sure a lot of people have probably mentioned the Goombas but my favourite has always been the Shy Guys. From an early age I always liked them because they’re very common, especially in Yoshi guys, and yet they’re barely dangerous and it always seems like the main character, whoever it is, is basically bullying them.

I think probably the name makes me think of them more sympathetically too. Why are they called shy? They don’t they act that way so is it just because they always wear a mask? Why do they wear a mask and what’s underneath? Are they loyal to Bowser or they another, unrelated faction? It’s never really been clear, at least to me.

I’m sure we’ll probably never get a proper answer to this, and we probably never should but I really like them and would actually welcome a spin-off game where you get to play as one.
Kister

Guilt free violence
I think it’s got to be Stormtroopers and/or Nazis, hasn’t it? Shooting human enemies is becoming more and more difficult to justify in games that looks realistic, where even generic ‘terrorists’ are questionable if the game’s story can’t avoid stereotypes and provide a decent backstory.

But who’s ever going to feel bad about shooting Nazis and Space Nazis? It helps that they’ve been in some great games over the years and while some are upset about the new Call Of Duty being a WW2 game I have to say I’m looking forward to it just because I love to punish these guys.
Binns

X marks the spot
Zombies are an obvious one for this but I’ll actually choose something else from Resident Evil: Mr X. Now, I’ll admit, I’m slightly too minds over this because if you’d asked me this 10 years ago I would’ve said Nemesis was the superior version of the unstoppable killing machine from Resident Evil but he was terrible in Resident Evil 3 and yet Mr X, who I used to think of as the rough sketch before the final product, was amazing in Resident Evil 2.

Lady Dimitrescu is the same idea but while her character is cooler she’s a lot easier to avoid than the other two, since she comes from much earlier in the game, so she’s not in the running. No, it’s Mr X who is the best fulfilment of the idea so far. Although I wouldn’t be against Capcom coming up with a Mr Y to try and perfect the formula.
Colbat 83

Halo hall of fame
Just had a play through of Halo Reach (started off as a way to get some Daily Achievements on the Xbox so I could get bonus Reward Points, but it’s one of my favourite Halo games, so it was not a hardship) and I ‘love’ the enemies on here.

Seems to be more variety than on other Halo Games (even with no Flood present).

I’d forgotten just how hard it seems compared to other Halo games, although maybe that’s my aging reflexes. The upgraded Grunts carrying Plasma Launchers, with their one-hit kills, were a sharp reminder that these are not just cannon fodder that can be taken lightly. There must be four or five different Grunts in the game… some standard ones but it was a good surprise to face some that could be a real threat. And the game uses the multiple level of creature design again and again (more so than other Halo games – maybe not?) – Skirmishers, Elites both having a variety of designs/weapons with which to kill you.

My real favourite though, and I do not know why, are the Brutes. Maybe it’s their design (or the weapons they drop) but I think they’re great.

It also has my least favourite of any enemy in Halo: the Hunters. Maybe I am missing a trick here, but they are just a bullet-draining pain in the butt, that can one-shot kill you (and they come in pairs).

For completion, the Drones are just… meh. Maybe with a lightgun they could be fun to shoot, but here they are a minor irritant; and the Engineers… didn’t get them at all.

He slimed me
It always hurts me that Dragon Quest isn’t that big in the West but I’d say that my favourite enemies are slimes. They’re actually a common enemy type in a lot of early role-player, but the Dragon Quest ones are super iconic with their tear-shape design and million variants.

They’re so popular, in Japan at least, that they have their own spin-off games and merchandise. They’re upper variable too, kind of like the Minions, so some are friendly, some are dangerous, and all are super cute! I will admit to owning several cuddly toy versions.
Focus

Good bosses
Enemies with background storylines are great for getting an anticipatory build up before the confrontations with them, creating a special bond between you and the antagonist. Ganondorf Dragmire was the first great boss I fought; Bowser and the Koopa Kids were good but Ganon was the darker and more mysterious one! His alter-ego Agahnim in A Link To The Past was a genius reveal and quite creepy when that moment happened.

In all the games, Ganon’s story keeps getting revealed more and more and his backstory and gets more complex and sinister! A thief Gerudo king and a King of Power and Darkness who seems as though he just can’t die throughout the Zelda timeline. The battles I have with this guy, from the SNES era to the GameCube, have all been different and progressive for battling situations. But A Link To The Past’s Ganon will always be my nostalgic favourite.

Another one of my favourite enemies are zombies and when executed correctly, like good Resident Evil games and The Last of Us, are so exciting to avoid or take on. The antagonists for games like these are also good but Albert Wesker stands out much more in my mind as a cruel calculating, scientist type military bad guy with an excellent cold inhumane personality!

The great thing about Wesker is listening to his enjoyment describing the cruelty of his current and future plans and then watching him execute them. His ever increasing powers throughout the series, and his film versions, makes him so very cool and gives me a sense of excitement whenever he is on the screen.

The only other antagonist who surpasses Albert is the one and only Sephiroth! When you first meet him, or the Jenova version of him, in Final Fantasy 7 he creates such mystery, as the exciting story is slowly revealed through your progress in the game.
Alucard