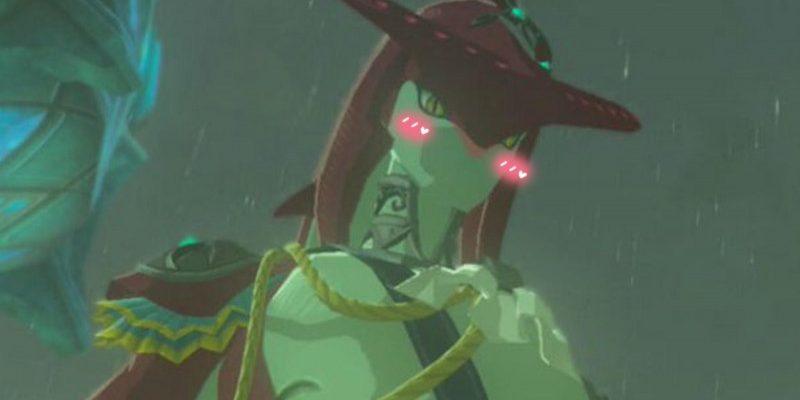 With the Nintendo E3 2021 showcase set for this Tuesday, June 15, I can’t help but to think about what I’d want to see the Big N share. With so many Legend of Zelda fans begging for Breath of the Wild 2 news, I put together a very serious, very hardcore wish list for what I’d like to see in the sequel. And by that, I mean a chance for me to call Nintendo cowards for not letting Zelda be playable and to talk about shark himbos.

So anyway, here’s what I want from The Legend of Zelda: Breath of the Wild 2 outside of a working title.

At the expense of being accused of being a “woke terrorist” ruining the good name of Game Informer, aren’t we tired yet of Zelda getting kidnapped? I’m not even saying that as any type of social commentary, I’m just … tired of that same storyline. With each new Legend of Zelda game, we see more of Zelda and her capabilities. Branching narratives aside, she definitely has the chops to be a badass in her own right. I’d love to see Breath of the Wild 2 move her character into the next stage of her evolution and to see her a playable hero with her own tricks up that proverbial sleeve.

Or literal sleeve, I don’t know what’s she’s hiding. She’s an enigma wrapped up in a mystery rolled around in missed opportunity. Get on that, Nintendo (I say respectfully).

Co-Op With Link And Zelda

While we’re on the topic of a playable Zelda, let’s throw some co-op action into the mix. In the teaser trailer first shown, we see Zelda and Link tag-team a dangerous location. Side-by-side, they’re ready to face whatever is next, so why not let them face it together as playable characters?

Take a moment to picture this just beyond simple co-op integration. With the climbing and gliding mechanics, how cool would it be to develop a dual-glide, or some kind of prompt that allows the pair to hoist one another up a cliff’s edge to conserve stamina? If you don’t think that’s the dopest thing ever, we need to chat.

Breath of the Wild introduced players to a wide variety of new characters to meet and to get to know. From the wide-eyed villager looking for some help, to the greatest Himbo to ever Himbo with Prince Sidon, I’d love to see Nintendo lean into this even more.

The first Breath of the Wild game was an expansive adventure and what kept the motivation to keep traveling high was, in part, due to the incredible faces met along the way. The Zelda universe has seen so many different timelines, so many different characters, and Nintendo has a real magic when it comes to creating interesting friends to our very own Link. Even still, Sidon made the internet collectively lose their minds with either bro vibes from the Zora or thirst from those that play too many BioWare games.

That last part may be a self-dunk, I’m not sure.

The way Breath of the Wild approached weapons was a hit or miss. Some players loved the breakable mechanic and the additional challenge this presented, while actual sane people just got really frustrated with it (kidding).

Nintendo built the entire weapons system in Breath of the Wild with the intent to allow players to experiment with different gear, different ways to approach combat. That desire to expand the player experience led to the decision to include the breakage system, but the problem was that each weapon seemed to break far too quickly. At first, I thought it was fun. A little gimmicky, but nothing game-changing. And then it just kept happening over and over and over and over again and it got very old, very quickly.

Personally, I’d love to see this mechanic leave completely, but I recognize that a large portion of the player-base enjoyed that and I don’t want to put my desires over anyone else’s. So how about a happy medium? Maybe longer break times? Modifications that strengthen prized gear? I’ll take anything, just please don’t bring the original system into the sequel.

Pettable animals in games has been becoming more and more common, as it should be. I want to be all the goodest of good boys out there and the Zelda franchise has had its fair share of adorable creatures to know and love. Give me hundreds of dogs. Hundreds of cats. Bury me in cuteness and then leave me to die.

That’s all I really want, Nintendo, is that so hard? Nintendogs only goes so far…

Build 'Em Up, Break 'Em Down

If you’ve played the first game, then you know that Hyrule has seen better days. From the small glimpse we’ve had at Breath of the Wild 2, it looks like things are about to get a whole lot worse before they get better, but what does that mean for the fine citizens of this world?

With so many games relishing in creationary building, it would be an interesting inclusion to have some form of restorative mechanics in the sequel. We were a part of the destruction in the first game, let’s be a part of the solution with number 2. Whether it’s actual building like in a survival game or just taking on additional side quests to add NPCs in their own efforts, I’d love to see a more involved element for our hero in helping to correct what’s wrong with the world besides just the obvious enemy.

One thing I really enjoyed about the first game as how incredible the challenging elements felt. Enemies felt conquered, dungeons felt imposing, and every victory felt hard-earned. I want more of that, to be honest. Give me different enemies; foes completely unlike anything we’ve seen in this universe. The Divine Beasts were an awesome inclusion, let’s take that a step further by leaning into the more magical elements of Hyrule.

Plus, with Gandondorf? You can’t tell me he doesn’t have some massive tricks in the works for Link and company. Let’s see them! Reign old gods down on our heads, ancient dormant foes rearing back to life. Give us something that is so completely out of left-field that touches on the lore that we love so much. This is Nintendo’s chance to truly do something completely different for the franchise because of the freedom that Breath of the Wild affords.

That, and I just want bragging rights. Yes, my life is sad.

But mostly? I just want more shark Himbos. Thank you for your time.