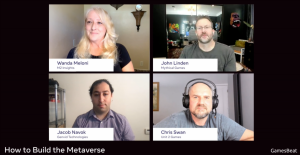 The “How to Build the Metaverse” panel during GamesBeat’s two-day all-digital metaverse event brought together speakers who are tackling the challenges in bringing the metaverse to life.

Wanda Meloni, CEO & principal analyst at M2 Insights, was joined on stage by John Linden, CEO of Mythical Games, Jacob Navok, CEO of Genvid, and Chris Swan, publishing director at Unit 2 Games — together  representing all parts of the spectrum, from creation to cloud and experience.

“To me, the metaverse is this ideology that we need to get to as an industry that opens up accessibility, makes gaming more ubiquitous, and makes a lot of these gaming experiences flow together,” said Linden. “What’s great about this panel is we’re all working on different pieces of technology that contribute to that overall ideology.”

Navok called the metaverse the next format of the internet: Mass scale, persistent connection, a space where people connect — though instead of looking at standard HTML pages, they’ll be part of a 3D-rendered universe.

“It takes years and decades to get to the level of network and compatibility formats that are going to be required to enable this, and we’re experimenting with some of the first experiences of what happens when you have millions of people in the exact same piece of content,” he said.

Genvid is doing that with the show they just started airing on Facebook using their technology, Rival Peak. The show, a game-like reality series with AI characters, has attracted millions of interactions in just the brief period of time it’s been online, Navok added.

Right now, Unit 2 is in early adopter territory, Swan said, where the pioneering users are the ones who are patient enough to physically move in and out of experiences that aren’t connected yet — because the infrastructure isn’t there yet.

“But the pandemic has made people find a lot more perseverance to try and stick to these technologies and learn more about it,” he pointed out. “Can I go to an online festival or do this thing that I wouldn’t otherwise have put myself out of my comfort box to try?”

Of course, there are still technology challenges in the effort to develop the metaverse — and one of the major stumbling blocks is open standards, Navok said. The internet evolved from work done by a consortium of university and government organizations with open standards, effectively, so the universal markup language they created enabled users to talk to each other without the barriers of mismatched standards.

Another problem is rights issue — moving between worlds with different IPs can be tricky, and transferring an avatar between them might end up being a sticky legal issue in the end.

For Linden, the biggest issue is ubiquity of access — being able to access what you’re looking for on any device you use. There are a lot of pieces behind that, especially the walled gardens of major properties which have a number of rules and regulations around what you can and can’t do. Even if you’re able to bring an experience to a platform in the first place, you still need to work around the platform’s restrictions, and everyone has different rules.

“If you can pull up any game on any platform, that’s a big first step,” Linden said. “Then once you have that, you can move to a little bit more of the interoperability. Now your wallets can move. Your access to items can move. But until we have that, we’re pretty gated right now before we can even start the concept.”

Swan added, “It’s this interoperability that’s going to be a tricky one to crack, whether that starts with big official partnerships, where a couple of big entities get together and do a deal here, another deal there, until a standard falls out — or whether we can be smarter than that and start the other way round from the bottom up.”

So how do you make the experience seamless for a player who wants to move between two completely different game engines? Does the player have to have downloaded both? Can assets generated in one game transfer to the other and be read? Does your computer have to go and patch it before you jump into that portal? Navok explained these are real usability issues that would affect the kind of seamless experience that metaverse engineers are imagining if not solved for.

“The conclusion is something I’ve been thinking about for a while now,” said Navok. “The same way in which we have a W3C that sets web standards, we’re going to need an open metaverse foundation to set interoperability between games and different policies. If this panel ends up being a call for that, we’ve accomplished our initial mission.”