While some of World of Warcraft: Dragonflight's dungeons are integral parts of the main story, others are designed more for thematic purposes. Located in Northern Thaldraszus, the Algeth'ar Academy was once a place where all dragonkind could participate in higher learning. Though it's been closed for many years, Headteacher Doragosa seeks to reopen the esteemed Academy, but must first contend with its current inhabitants.

This guide will provide a complete look at the Algeth'ar Academy dungeon, including how to beat the bosses and trash, the best routing, Mythic Plus tips and tricks, and what loot is available for successful adventurers. 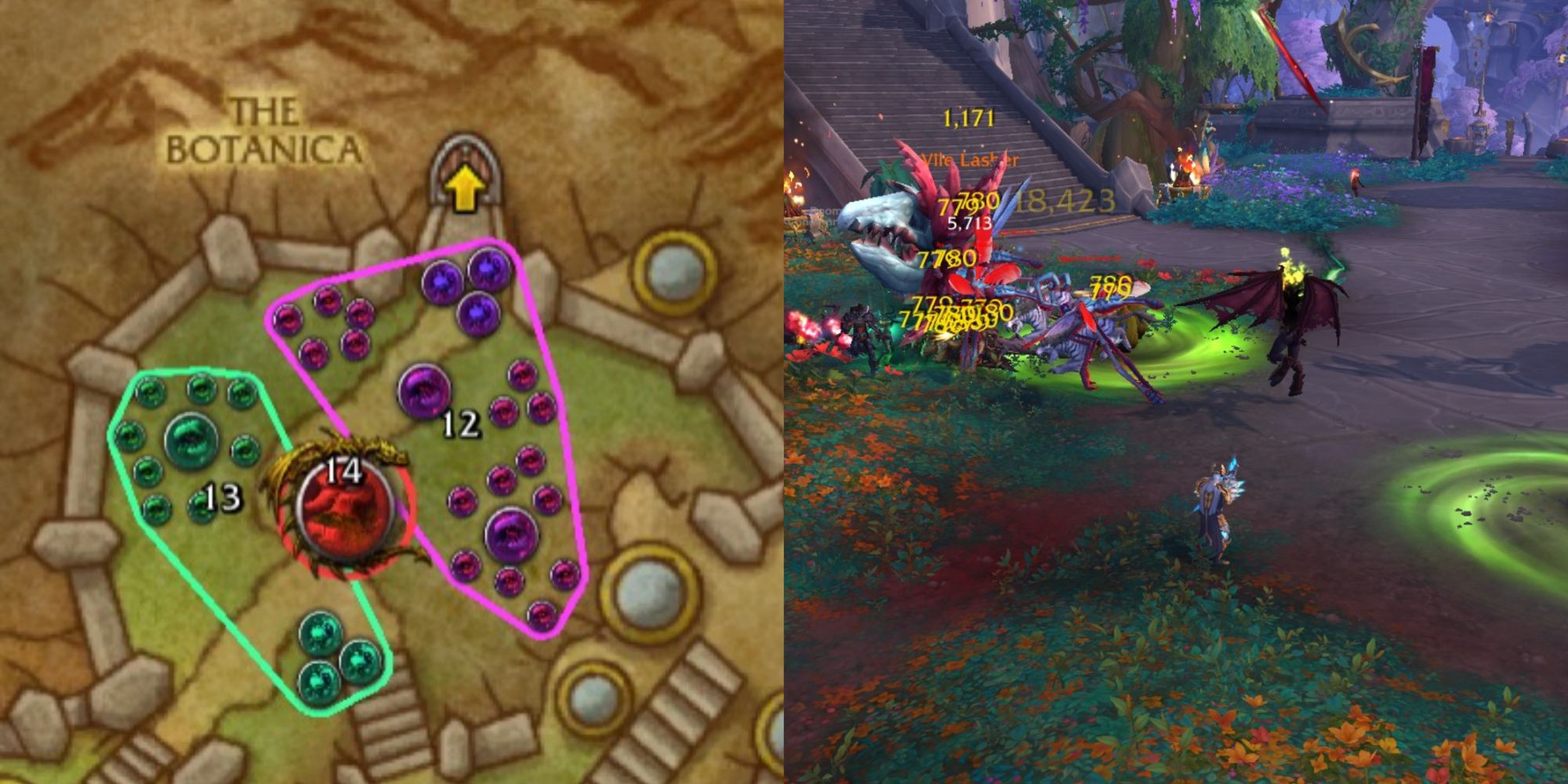 At the very start of the dungeon, you will take a Wind Gate over to the main part of the island. Here, you will find that the five Dragonflights have congregated for the reopening of the school. Your first priority is to talk to one of the five Recruiter NPCs. They will provide you with a permanent buff, the type of which changes depending on which Flight they belong to.

Pick whichever buff suits your class the best, the Green being especially good if you are Tanking, and proceed towards the right-hand stairs. 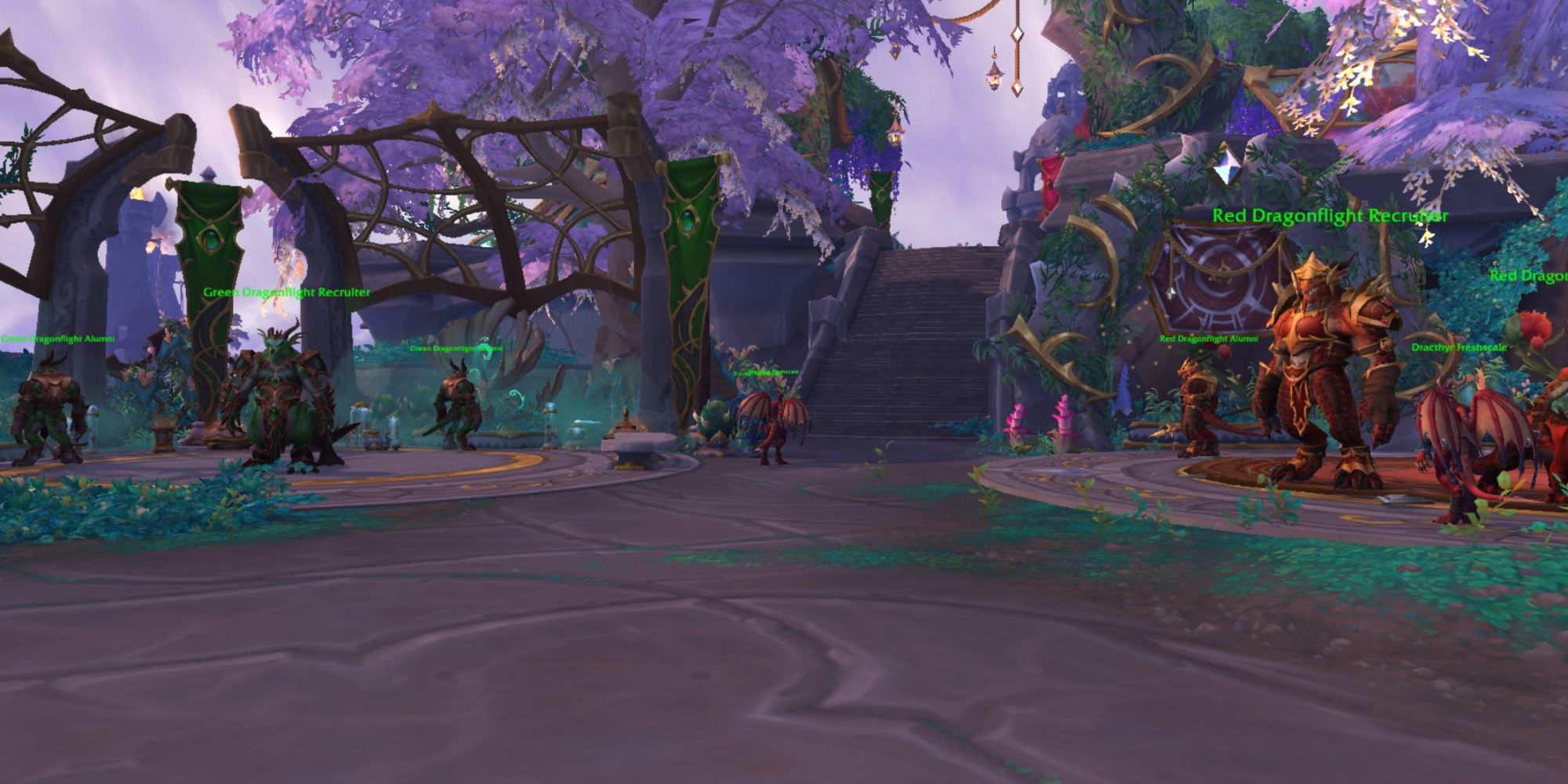 Once up the stairs, you will find a garden filled with large packs of plants and patrolling dragonflies. With proper coordination, you can make up a large amount of time here, by doing one or two huge pulls. Most of the enemies are low damaging or have avoidable abilities, so if your Tank can successfully hold or kite them around, you can rack up a high trash percentage in a short space of time. 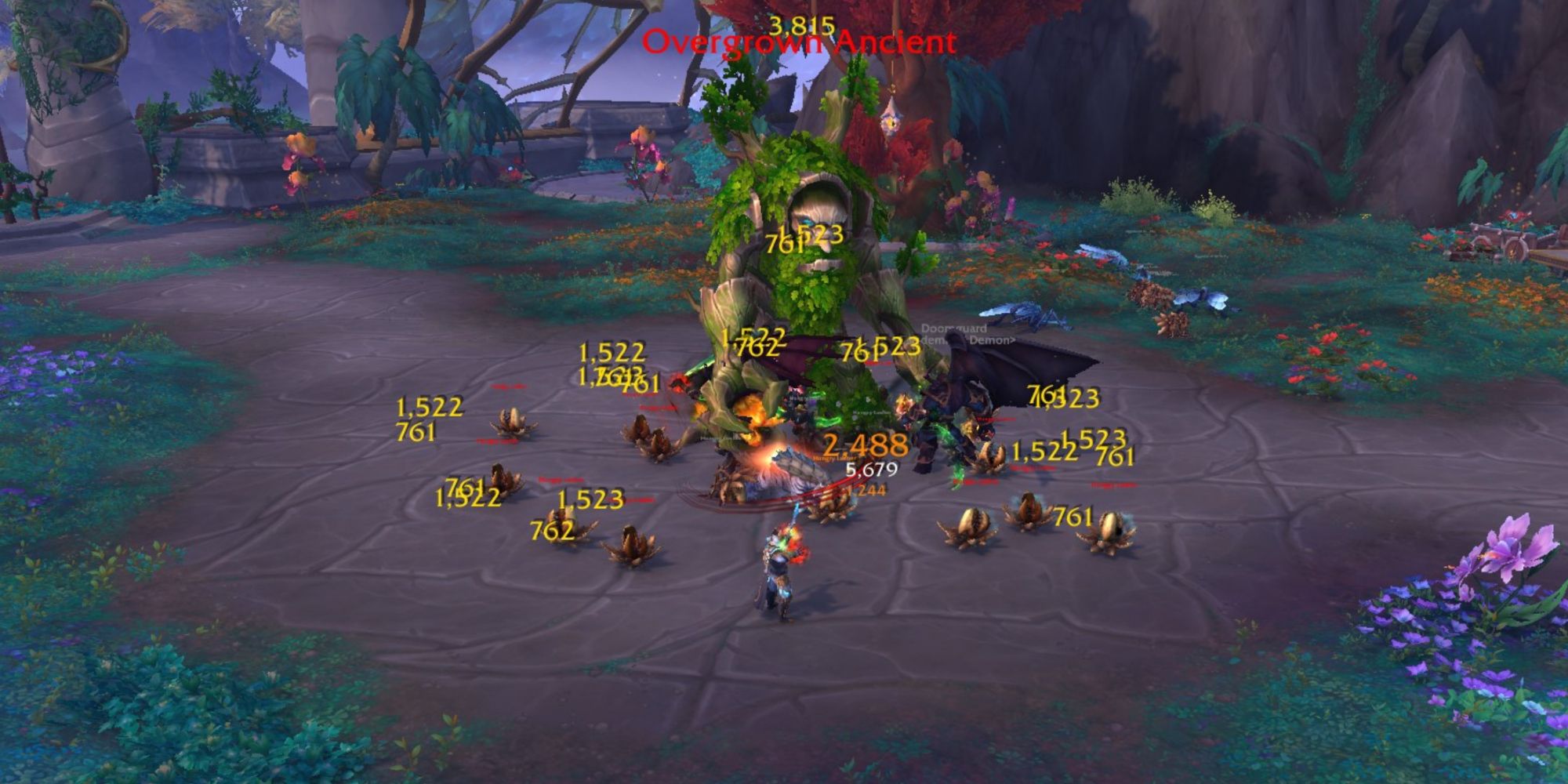 Once you have killed every lasher in the room, and after a short NPC dialogue, the Overgrown Ancient boss will become targetable.

Despite being listed third in the Adventure Guide, most groups will tackle this big tree first, as he is considered the most difficult boss of the dungeon, and using a cooldown such as Heroism/Bloodlust is typically recommended. His fight can be quite hectic and requires not just decent mechanical awareness but also high AoE damage and healing from your group. 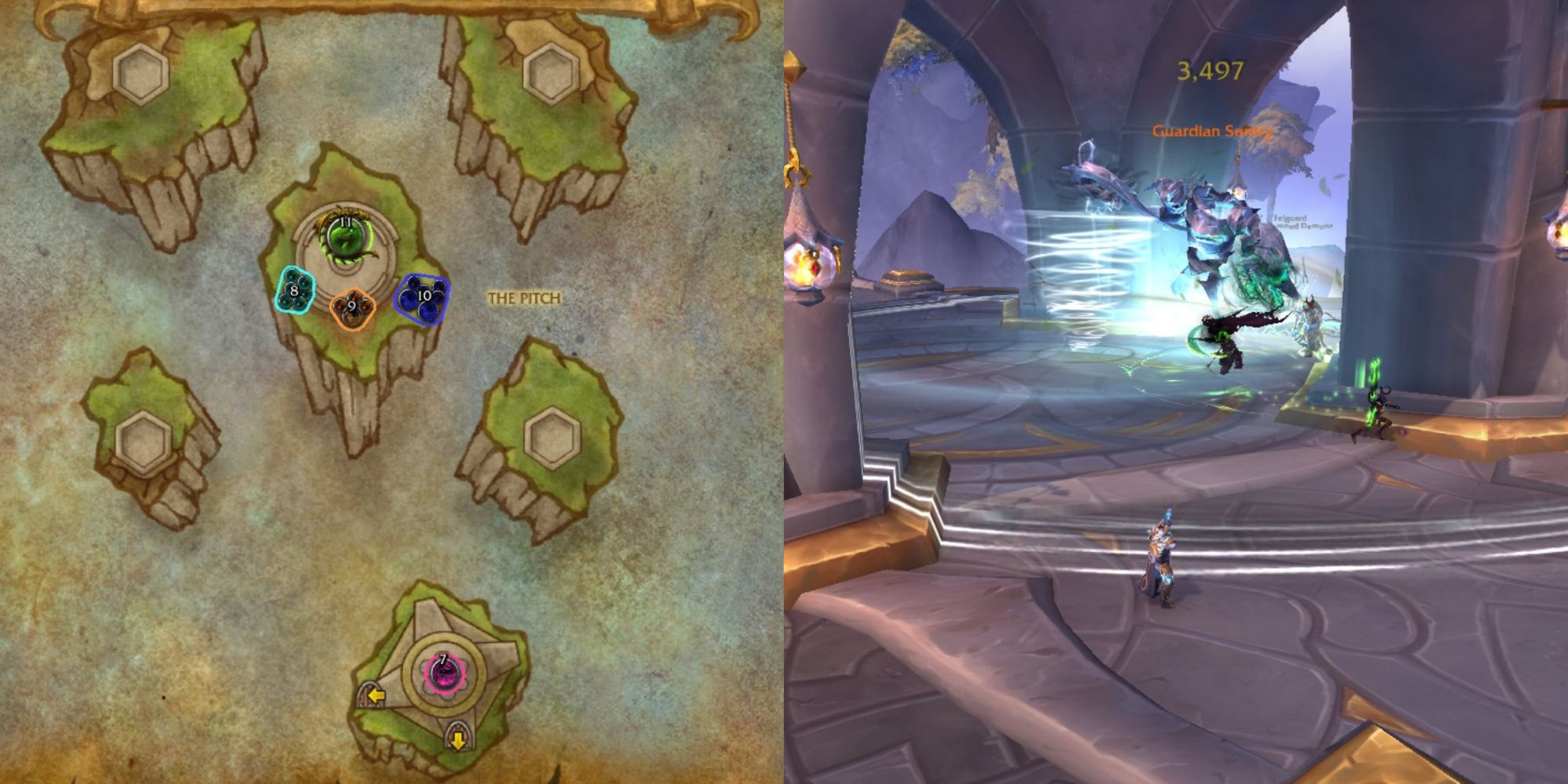 After defeating the Overgrown Ancient, proceed Northwards, and take the Wind Gate over to the floating platform. Here you will only find one enemy, and the path to Crawth has relatively little trash in general. Once you have killed the Guardian Sentry, take the next North Wind Gate to Crawth's platform. 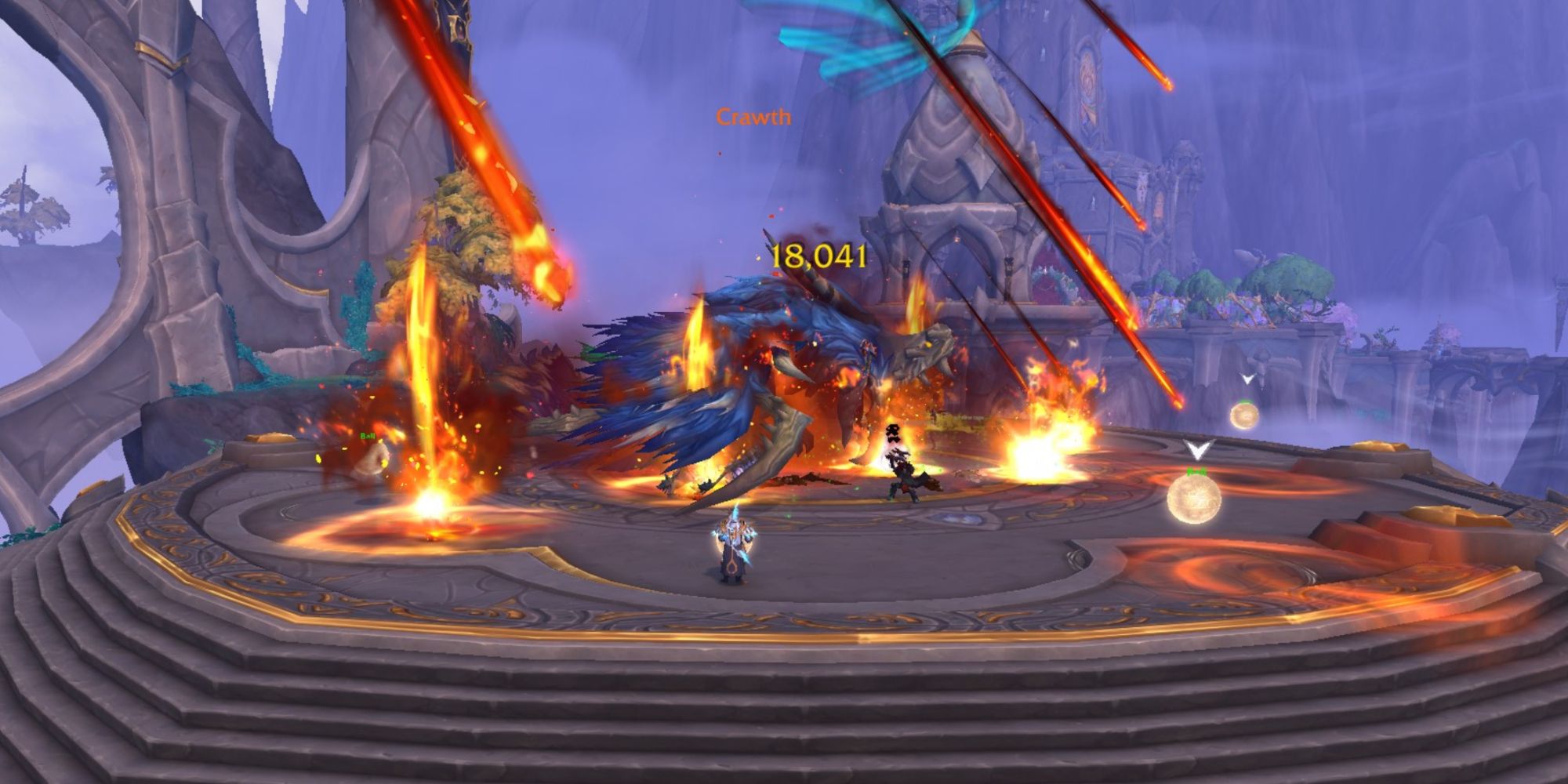 A seemingly easy encounter, Crawth can quickly become one of the most irritating bosses in the Algeth'ar Academy, and you will benefit from ending this encounter as quickly as possible. The main mechanic is centered around scoring three goals on either of the goals on the sides of the platform.

To score a goal, run over one of the spawned balls, and then move into one of the goal areas. You will then be prompted to use an extra action button, Play Ball!, and this will toss the ball away, scoring one goal. The goals will spawn at 75 percent and 45 percent of the boss' health, and each goal can only be used once.

To spawn Crawth, you must first score three times in either goal. The goal you choose does not matter at this stage.

Groups will typically score in the Fire goal first, in order to burst down the boss. The longer that fight goes on, the more damage Crawth will wrack up, and the more tornados will spawn, meaning you want to try to limit the amount of time you spend fighting against the winds by scoring in the Wind goal second. 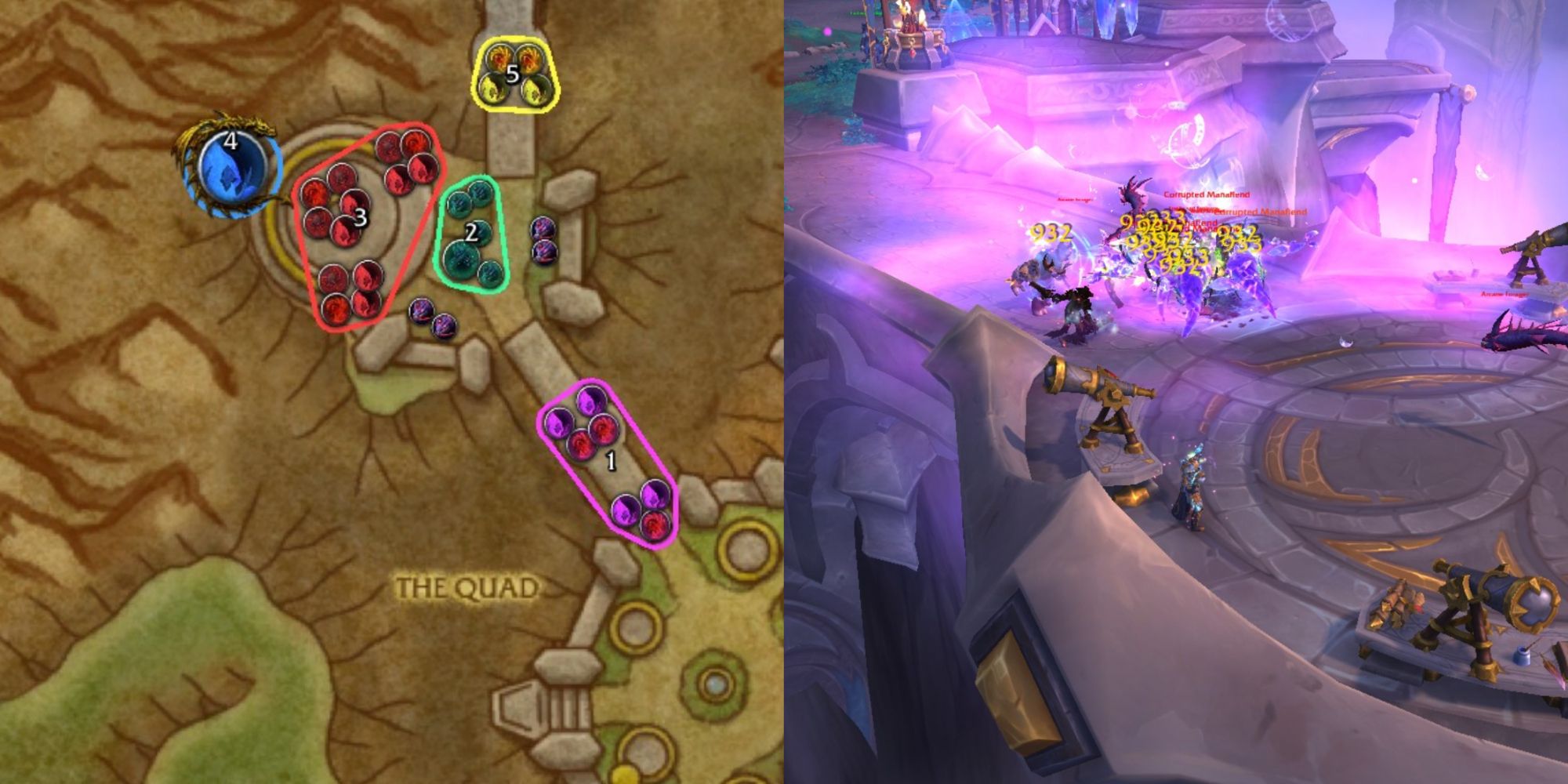 While you can technically begin the dungeon with this trash section, you will typically come from Crawth, and so will end up clearing your way back to the start. Take the Western Wind Gate from the Guardian Sentry platform to reach Vexamus' section.

Despite being first in the Adventure Guide, most groups will tackle Vexamus as the third boss. He has some high impact abilities, but is a relatively simple fight, provided everyone spaces out well and is proactive about soaking the Arcane Orbs. 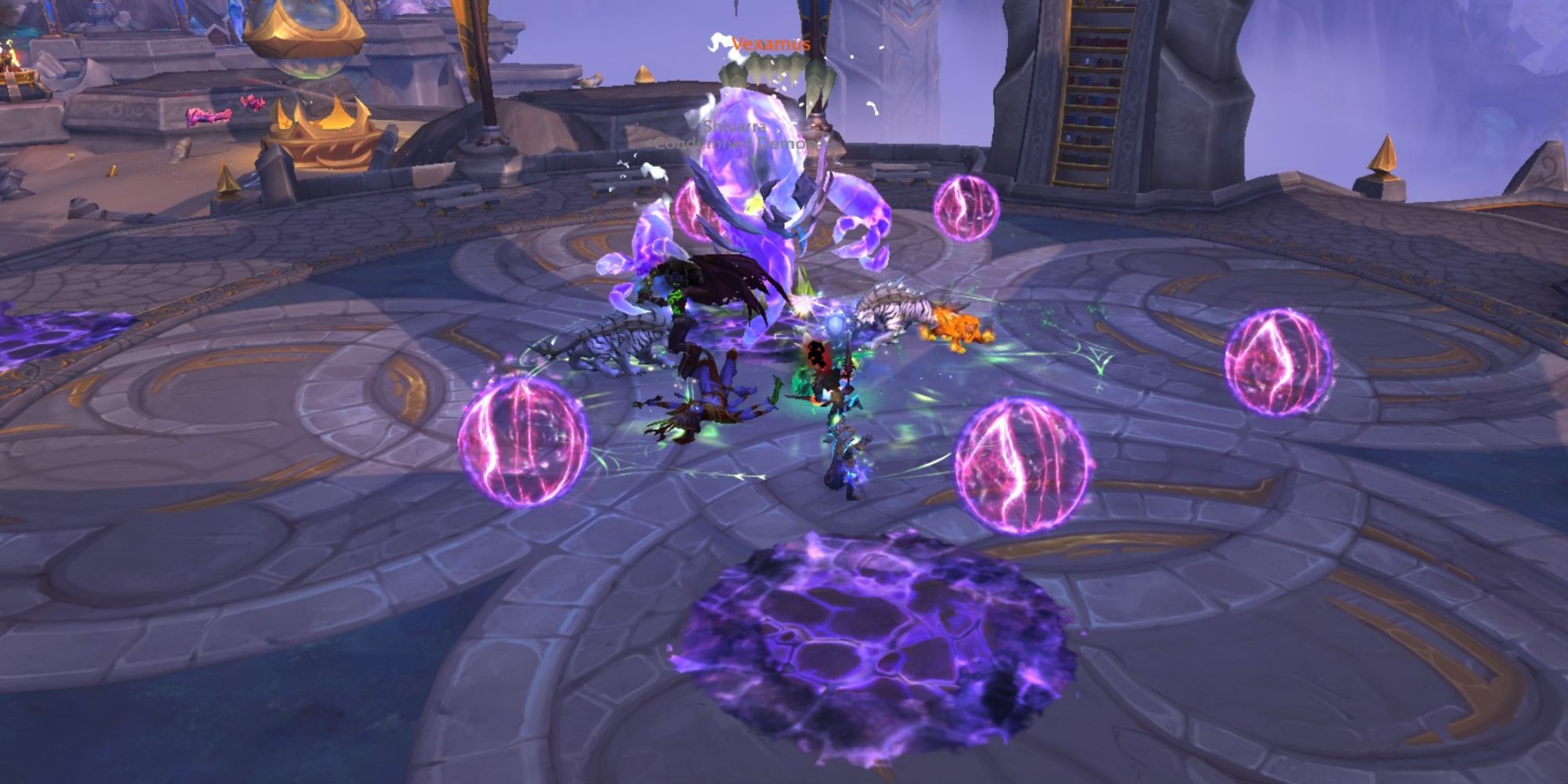 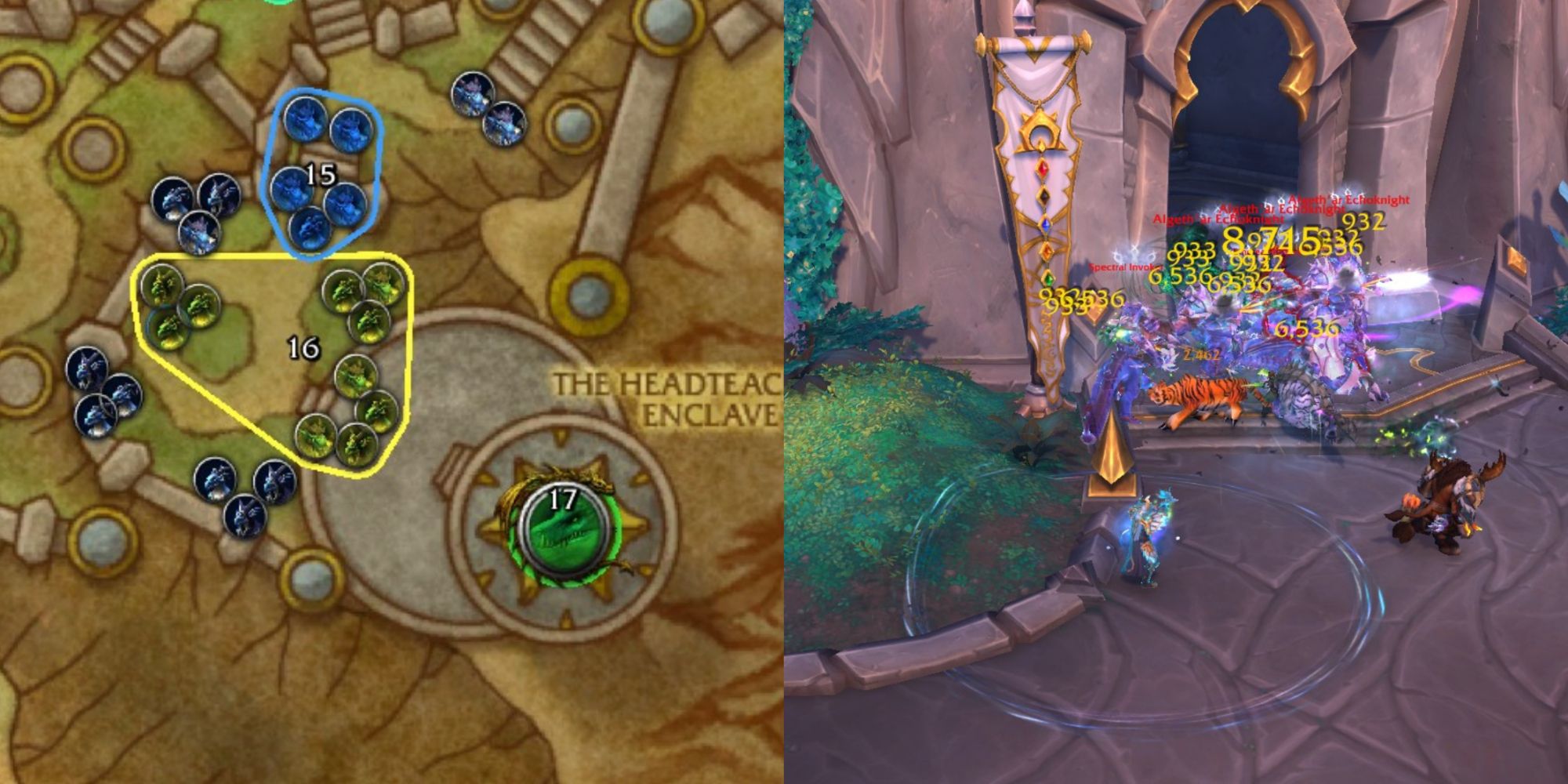 After defeating Vexamus and clearing the pathway back to the start, you will head up back to the Overgrown Ancient's area, before taking a right turn and heading up another flight of stairs. The following enemies can be tricky if you pull too many, but with coordination you can also make up a good amount of time here, as many of their abilities are avoidable. 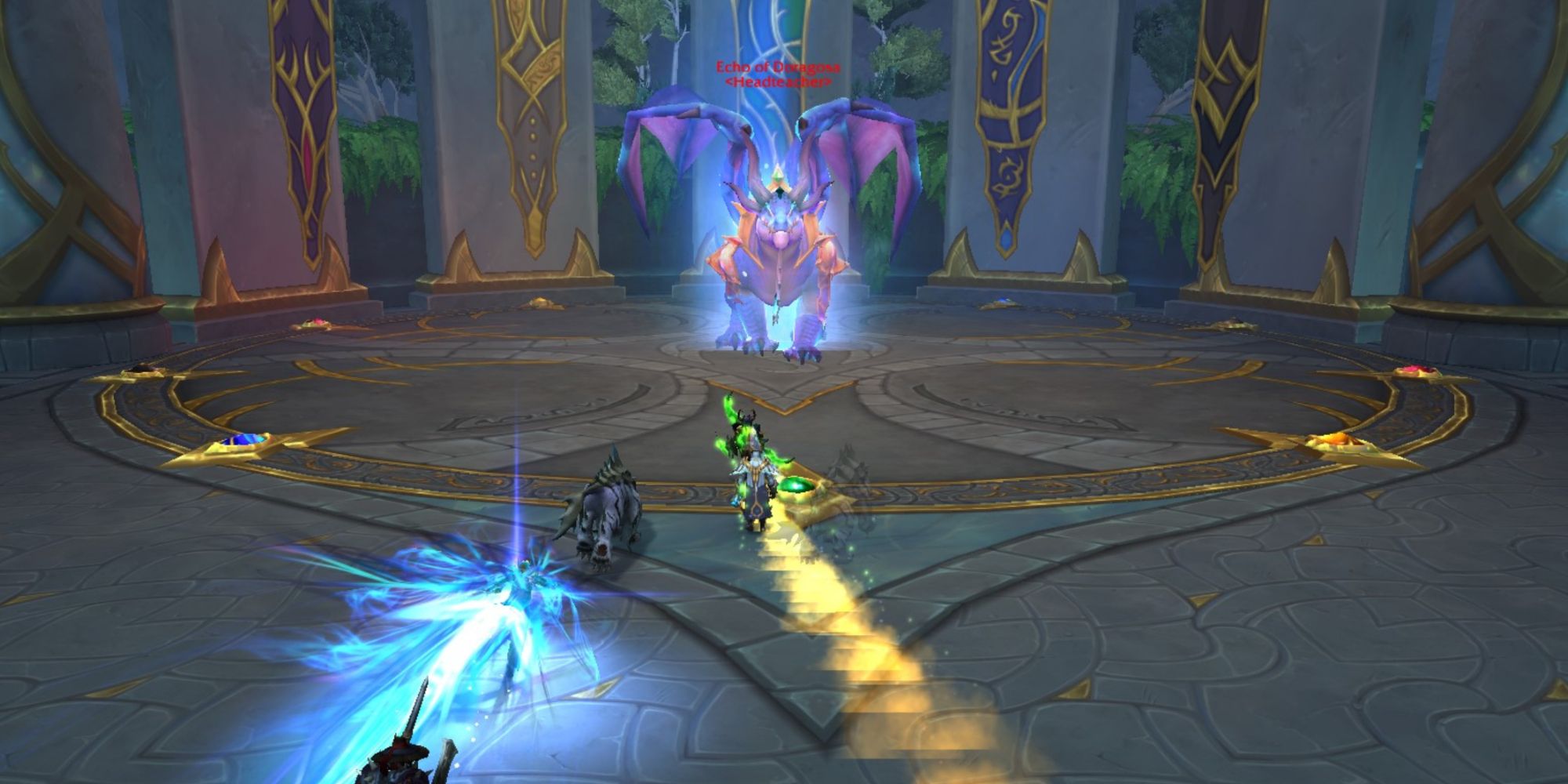 Found in the last room of the Dungeon, this spectral memory is a deceptive fight that becomes harder the longer it goes on. Making good use of the room, and avoiding any unnecessary mechanics, will help you greatly in finishing off the dungeon. 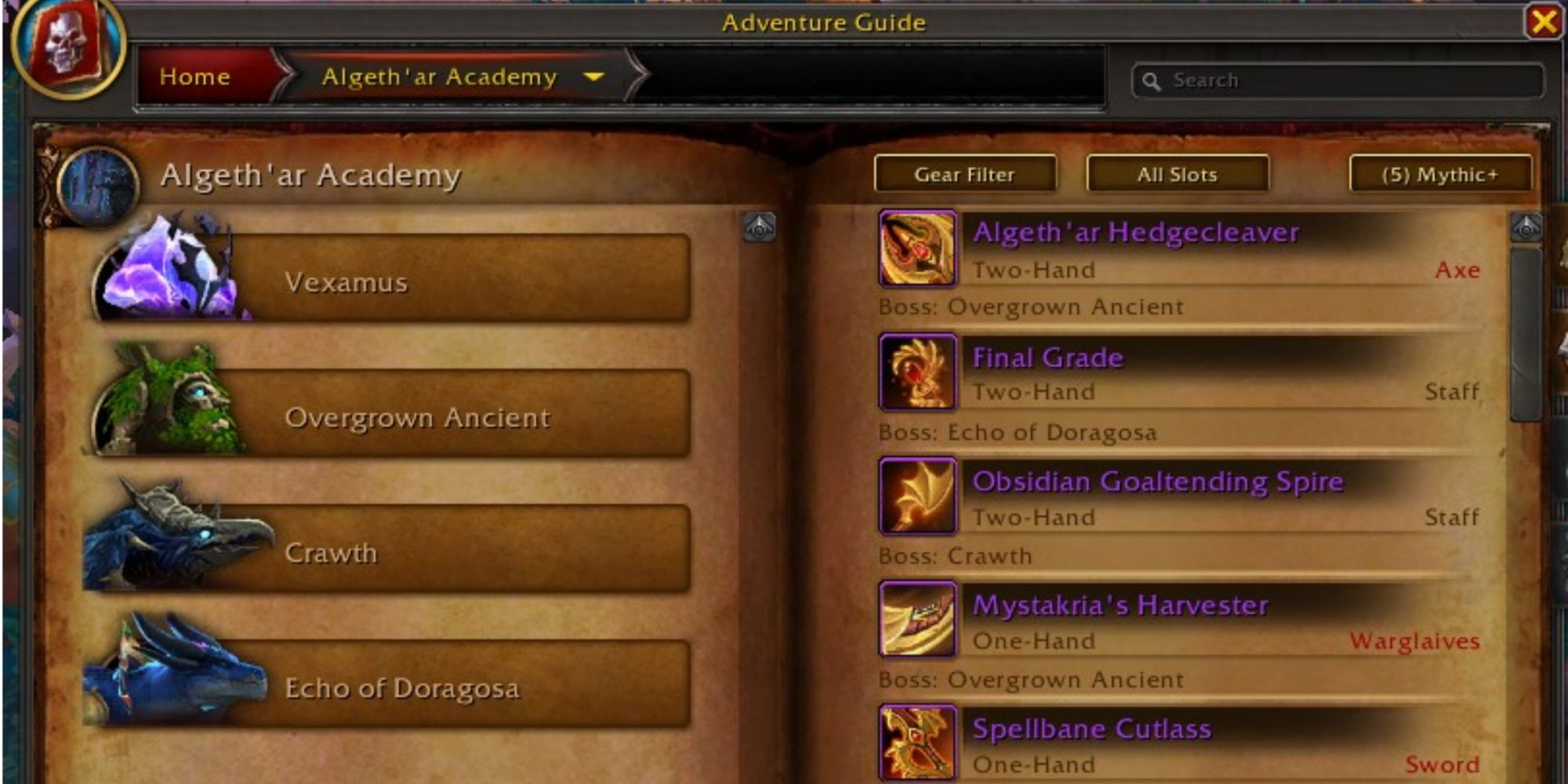