Few can match the hard-hitting brutality of an Arms Warrior and World of Warcraft: Dragonflight gives the iconic battle master a fresh new coat of paint. The new talent trees offer a strong level of personalisation for your all-conquering executioner, by letting you specialise with tailored builds, depending on the situation. Whether you enjoy relentlessly hacking down a big enemy, or roleplaying as a living Beyblade via Bladestorm, Arms Warrior has got you covered.

This guide will show you the fundamental aspects of playing Arms Warrior in PvE content. It will guide you through the best talents, races, rotation, and consumables for the spec, alongside suggesting why you might want to give the master-at-arms a try. 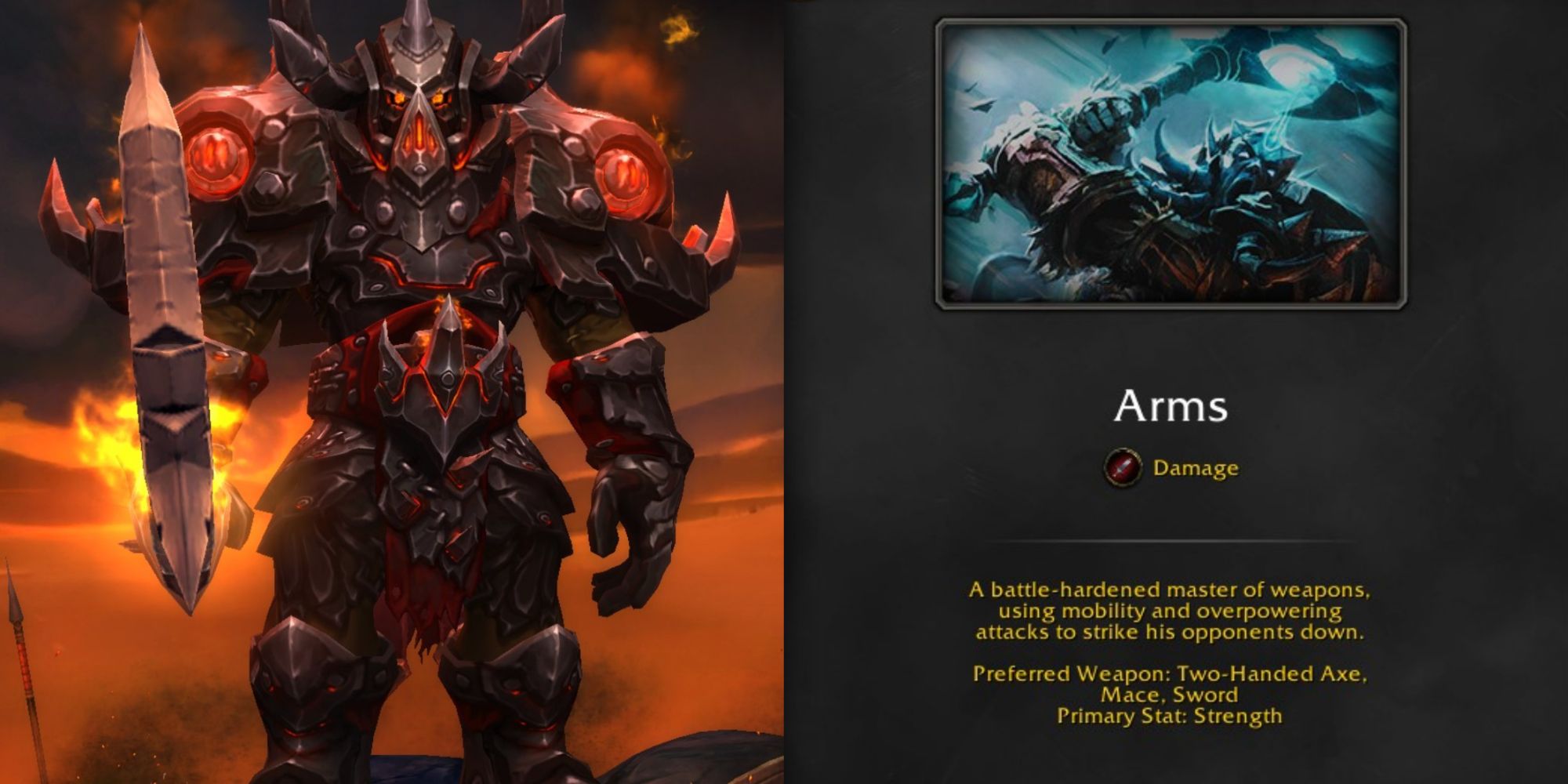 The Warrior class has two DPS specialisations; Arms and Fury. Fury is centered around a quick rotation with low cooldown abilities, emphasising high Rage generation and a frantic playstyle. Arms plays much slower, preferring to rely on big hits and combinations. Both specs have strengths and weaknesses, and although one may be tuned higher than the other, you should play whichever you enjoy the most. 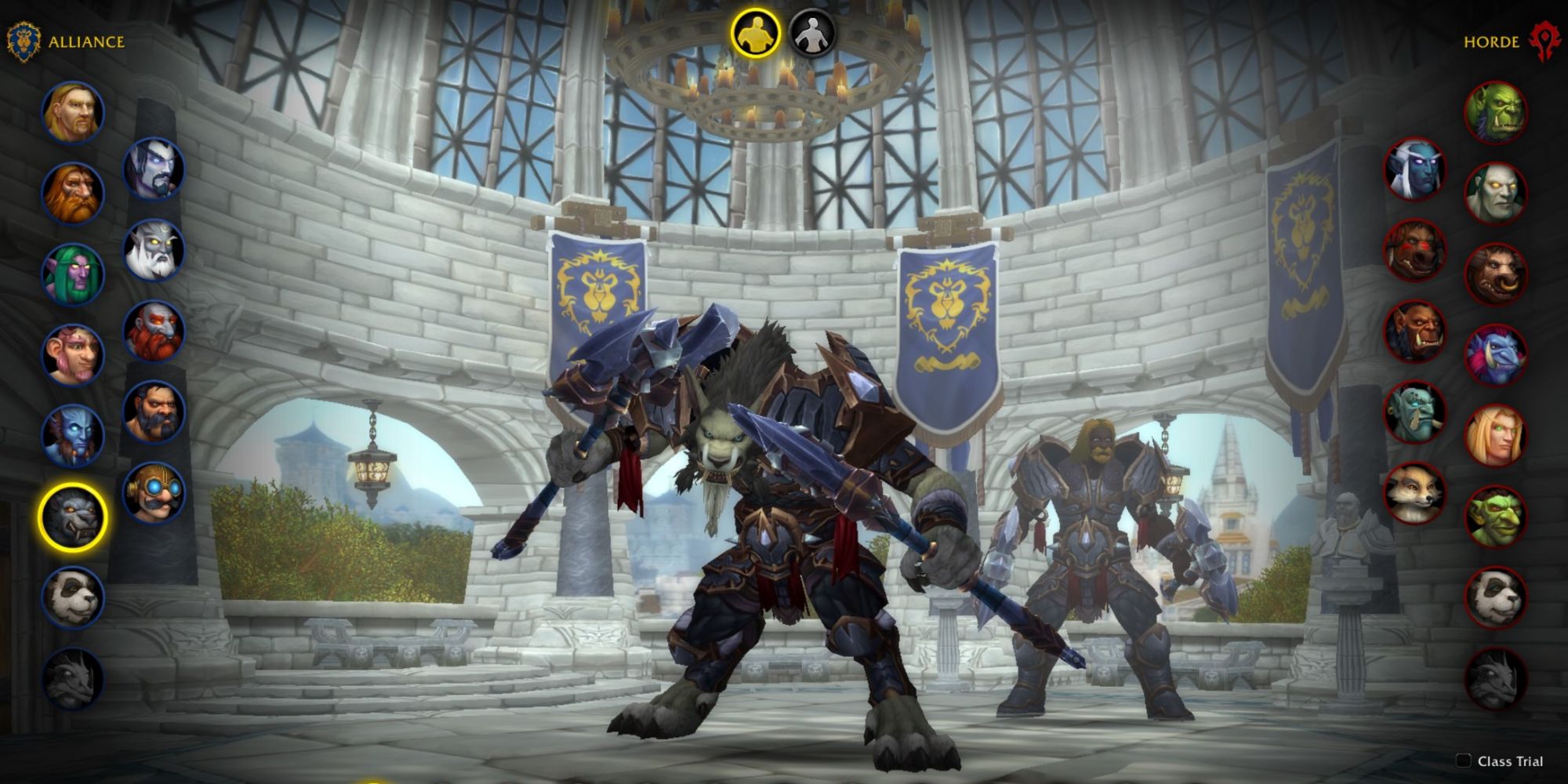 Nearly every race in WoW can play as a Warrior, so you have a wide variety to select from. The standard advice is to go for whichever race you prefer visually, as the differences in performance are very minimal. Here are a few of the top options for Arms: 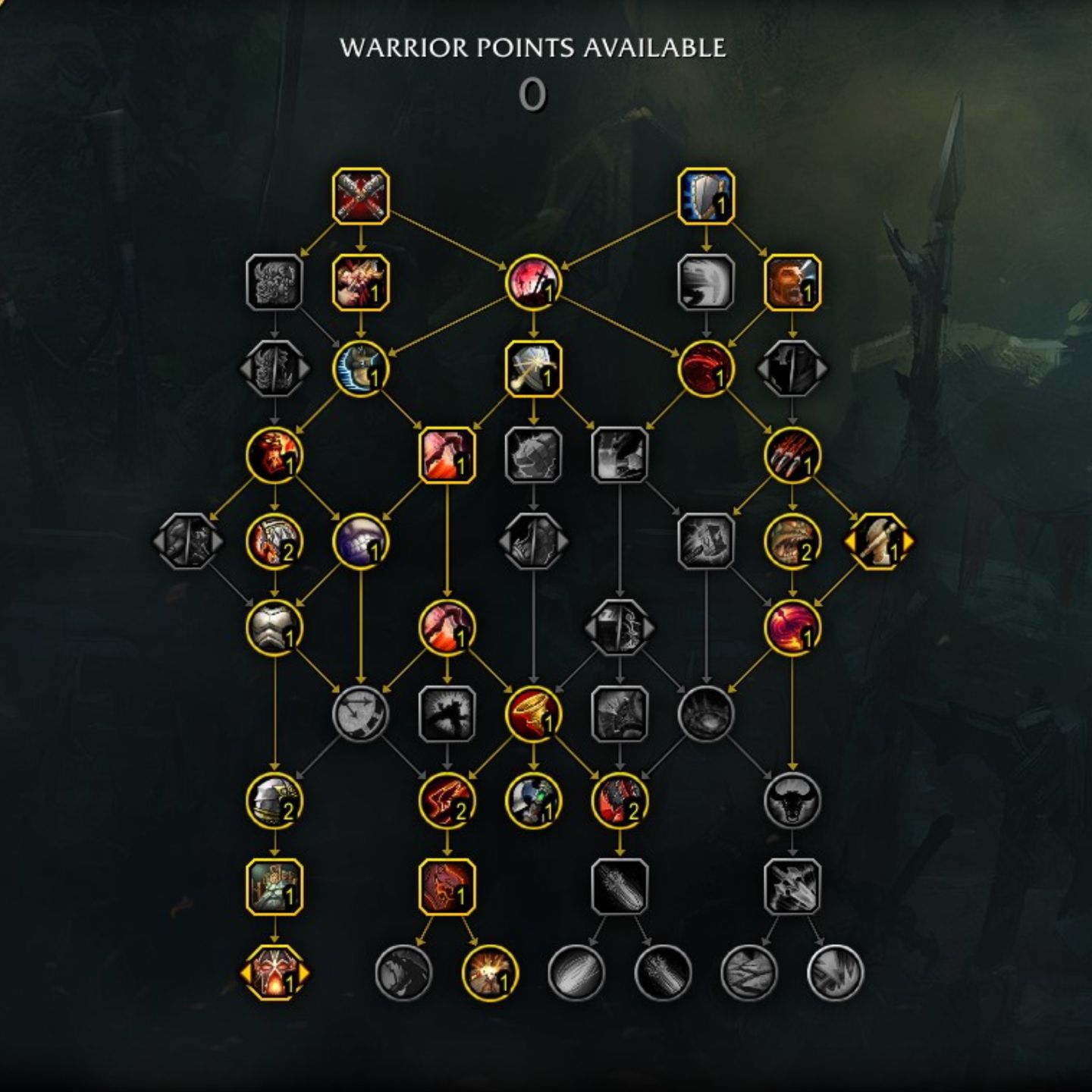 While they might look intimidating compared to the older versions, the Dragonflight talent trees are simple to learn once you begin to play around with them. On the left is the class tree, which is the same for all Warrior specialisations. On the right is the Arms tree, where you will find core abilities and the talents that really allow you to customise your build.

To progress down through the tree, a certain amount of points must be spent in the previous section. This stops you from just taking everything at the bottom, where the strongest talents are typically found.

There is a certain degree of change in your class tree when flexing between a single target and AoE build, so make sure you've selected the right talents when switching, or else you may miss out on powerful passives, such as Blood and Thunder. 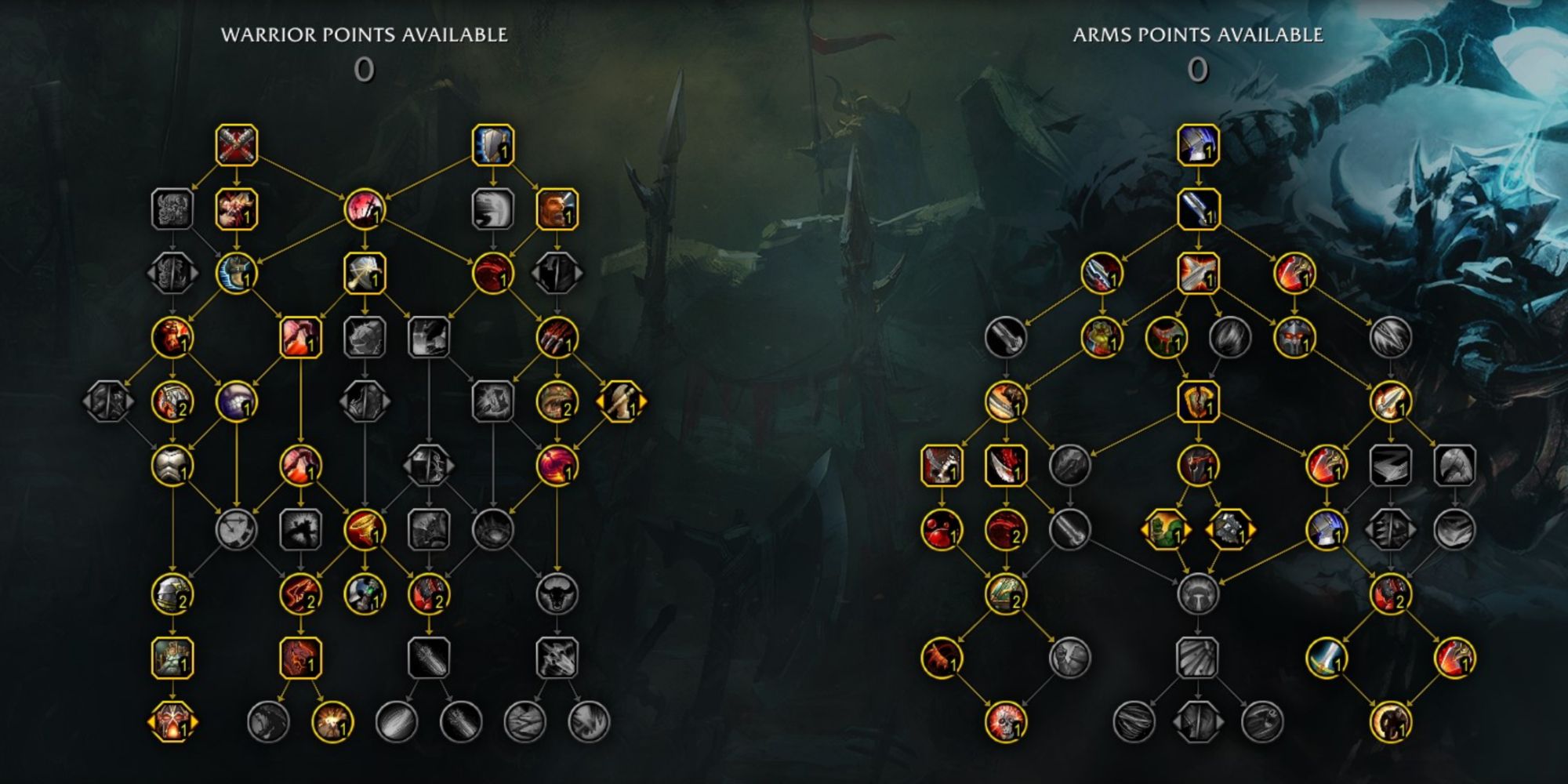 The Arms Warrior raid build focuses on improving your Execute damage as much as possible. A core spell for Arms, Execute brings amazing utility in the fact the majority of your damage comes towards the end of a boss encounter. This is typically the hardest part of the fight, so increased damage is welcome, in order to shorten the duration you spend in the end phases.

Talents such as Massacre and Juggernaut synergise excellently and mean you only hit your stride once you can start reliably Executing, on targets below 35% health.

The focus on buffing these particular spells leaves the AoE potential of this build at an all-time low, and you will have very little damage on additional targets, so prioritise running this build on fights with few adds or if you need to focus on your boss damage. 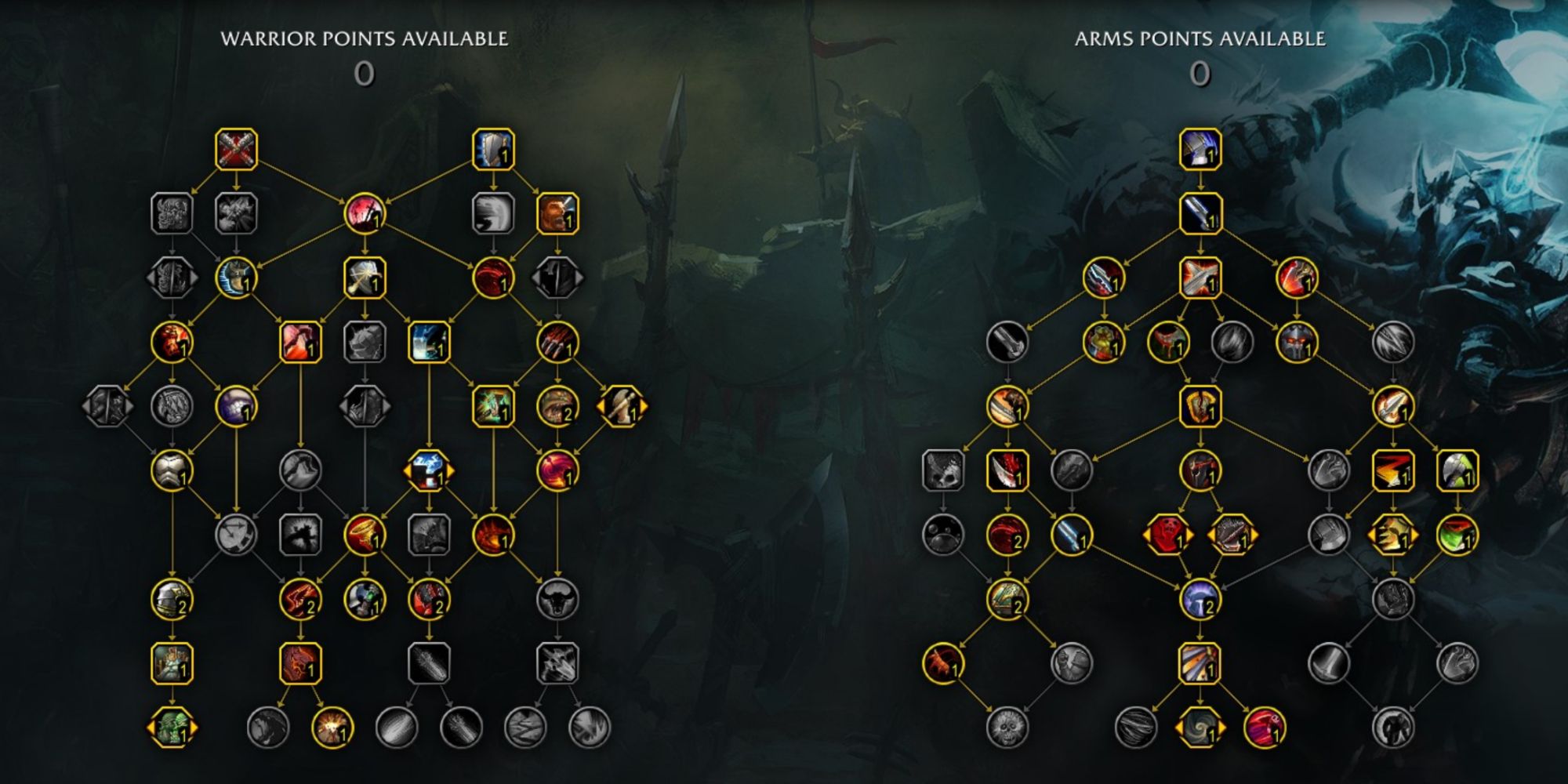 In combination, these three will allow for extremely high burst AoE damage, and Arms is highly effective at chunking down massive packs of enemies. Using the empowered Whirlwind and Cleave procs from Merciless Bonegrinder allows for strong up front damage, while your core AoE spells such as Thunder Clap and Cleave provide your consistent output.

Much like the Execute build, your dungeon talent set up comes with a severe weakness. The lack of investment into your single target means your boss damage will be very mediocre, and you will want to consider whether the AoE burst is worth the drop-off on bosses. Whether the Mythic Plus affix is Fortified or Tyrannical can be a good factor in deciding this.

How To Play The Rotation 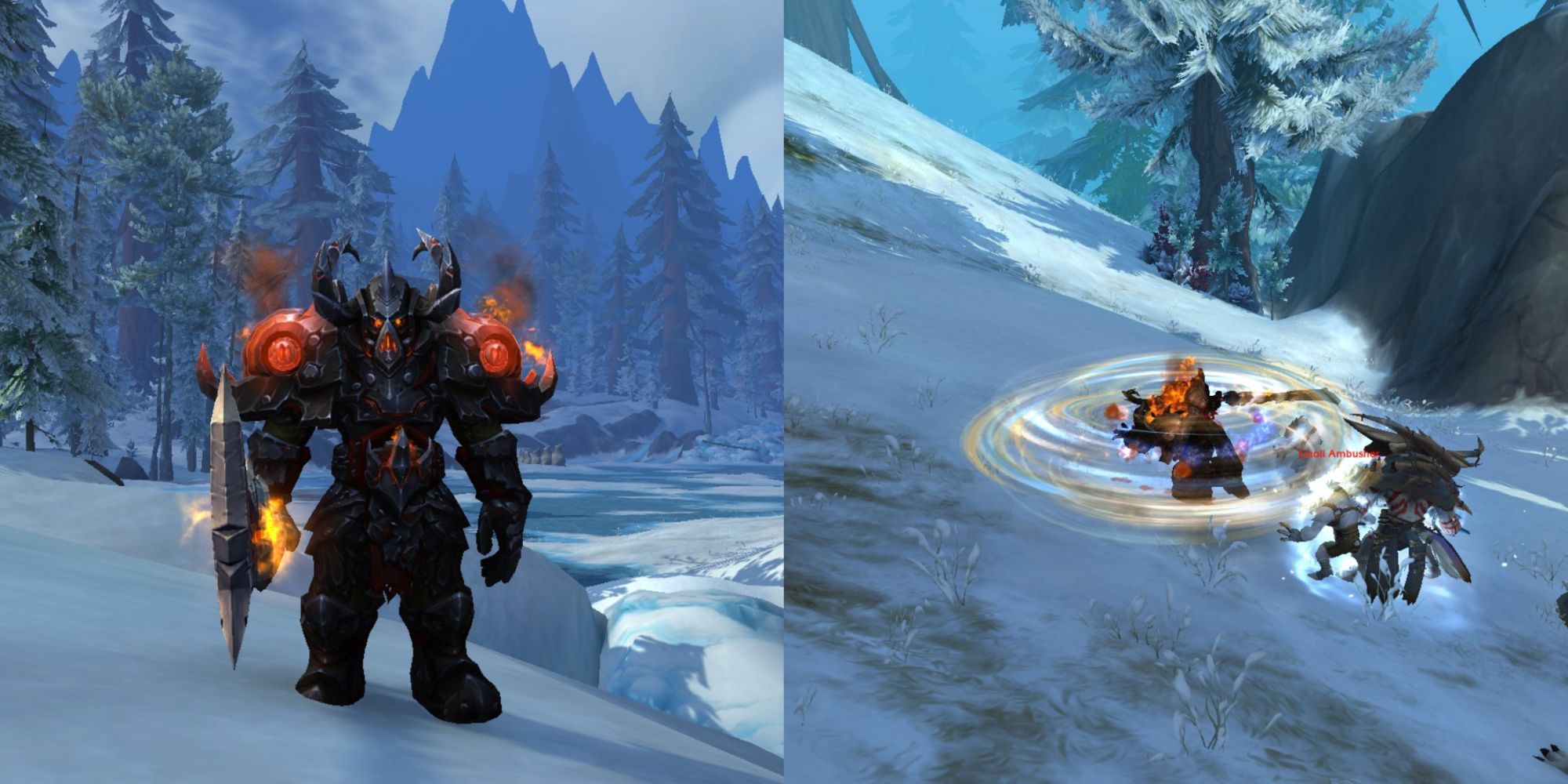 Your single target Arms Warrior rotation should look like this, after initiating combat with Charge.

During the Execute Phase, Executing takes a much higher priority, as you will want to spend as much Rage as possible on getting them out.

When it comes to AoE, the rotation looks similar, although you will want to be applying your Rend with Thunder Clap instead. Instead of Mortal Strike, you will be using Cleave as your Rage spender, and Whirlwind when it comes off cooldown. As mentioned above, when running the dungeon build you should be making good use out of your Merciless Bonegrinder buff, and playing around Bladestorm is the key to good AoE output.

As a DPS, you should always be combining on-use trinkets with your damage cooldowns. This can be done by referencing the gear slot the trinket is currently equipped in, either slot 13 or 14. You will want to synergise your trinkets with Avatar when playing an Arms Warrior.

Having a low cooldown interrupt means you should be aware of the need to kick any enemy casts and setting them as your focus target will allow you to interrupt them at a greater speed than manually retargeting.

When casting a ground-targeted spell such as Heroic Leap, you can replace the need to click by macroing the targeting reticule to your cursor. 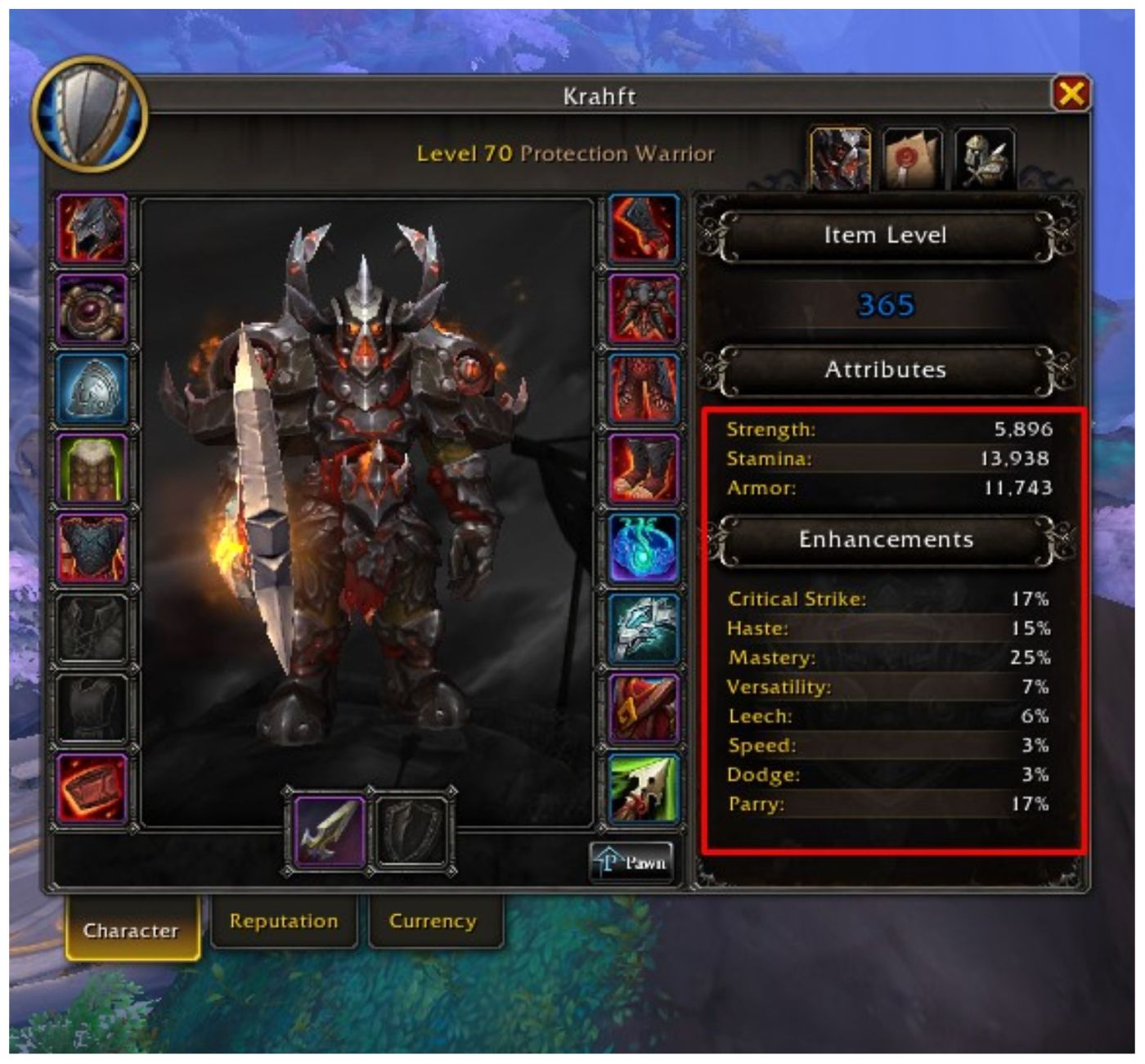 Once you hit max level, you will probably find yourself with a variety of quest and dungeon gear. This will bring you up to roughly 320 item level, but to take part in end game content you should be focusing on improving this number, using a variety of methods.

Both Mythic Zero dungeons and the Renown pathways can give you some quick and easy gear, boosting you up to over 370 item level, where you are ready to either enter the Vault of the Incarnates raid, or start playing Mythic Plus Dungeons.

Your best items will typically feature the Critical Strike stat, but also include a high amount of Haste. Here are some suggested items for your Best in Slot Pre Raid gear.

Your true pre-BiS gear will be plate items crafted from Blacksmithing. However, depending on supply, these could be extremely expensive to buy, so you might want to save up your resources for a certain item, such as a Weapon. Crafted items can be upgraded all the way up to 418 item level, so acquiring one or two strong pieces can be a good long-term investment.

Your primary stat as an Arms Warrior is Strength, and this should be your major focus as it directly increases the damage of your abilities. As a DPS, you should be trying to gain as much damage as possible from your gear, and you don't have to deal with the extra concerns of tanks and healers, such as Stamina. Alongside Strength, you have four secondary stats to choose from:

For damage output, your general stat priority should be:

All secondaries are quite close together, and although you should prioritise a healthy mix of Crit and Haste, you should mainly be going for item level and the highest amount of stats overall.

Due to the nature of secondary stat relationships, you can find a more detailed breakdown by simming your character using external tools such as the Raidbots website. This will let you know which stats to aim for and will let you directly compare gear to find your best equipable set.

As noted above, you will want to go for Strength followed by Crit when gemming.

Your best gems will be:

Owing to gems possessing different qualities, you should socket the highest quality gems possible, which will result in more stats.

Your best enchants are:

Try to procure the highest quality consumables from both work orders and the auction house, and don't forget to be well stocked up before taking on any end-game content.