Hunter, one of the most unique classes in World of Warcraft, got some nice attention in Dragonflight. With the expansion now live, that attention has paid off, as all the Hunter specializations look quite good to play. WoW has also become much more alt-friendly, and consequently, you can play as many classes as you want with very few inhibiting issues. All you need to do is level and gear your alternate characters.

When considering Survival Hunter, understand it’s a unique Hunter specialization since it is the only one that is melee. As such, its playstyle is very different from its two ranged counterparts, and the diversity of the new talent trees makes that even more apparent. 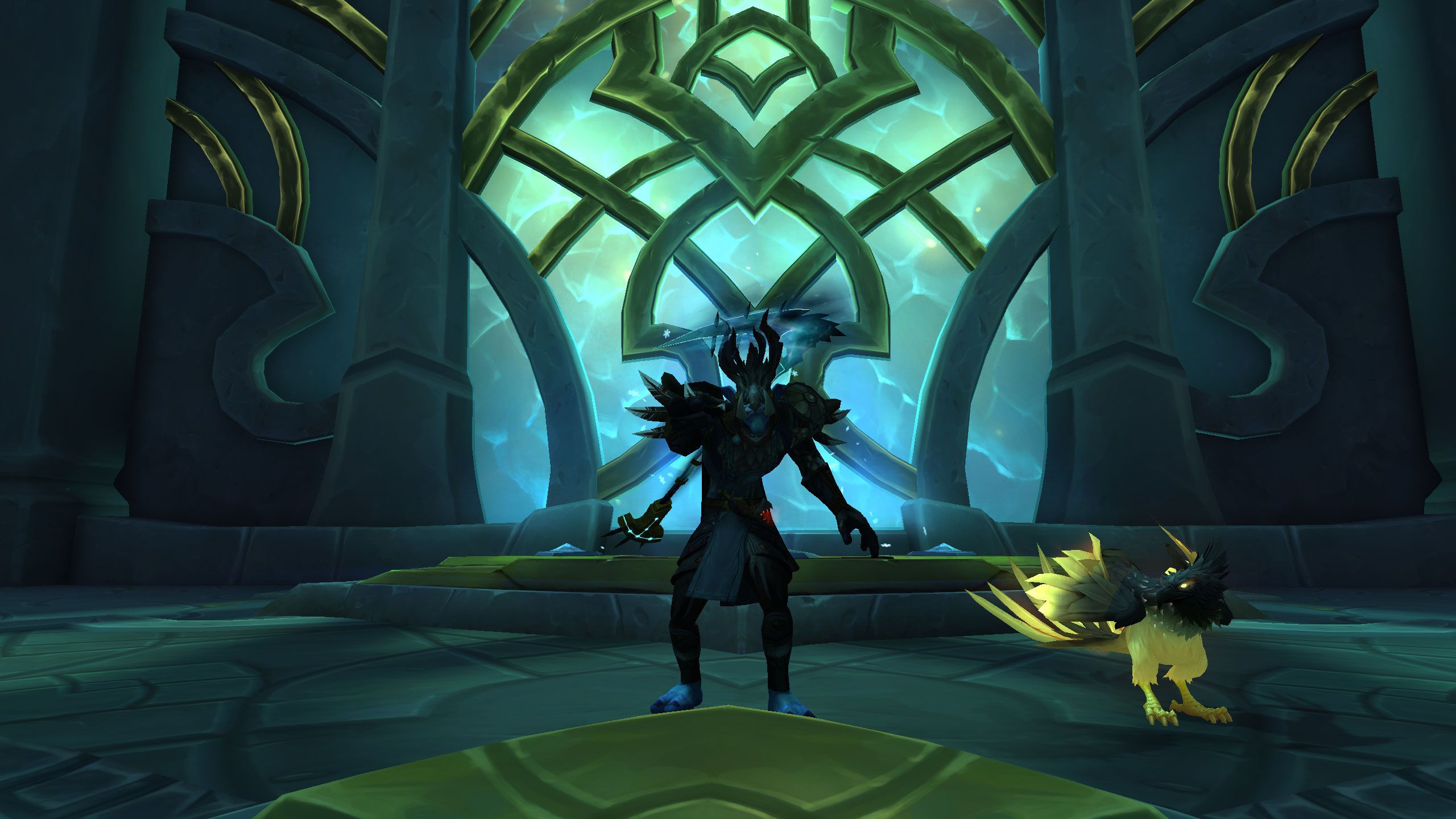 Here are three great reasons why you should consider choosing Survival: 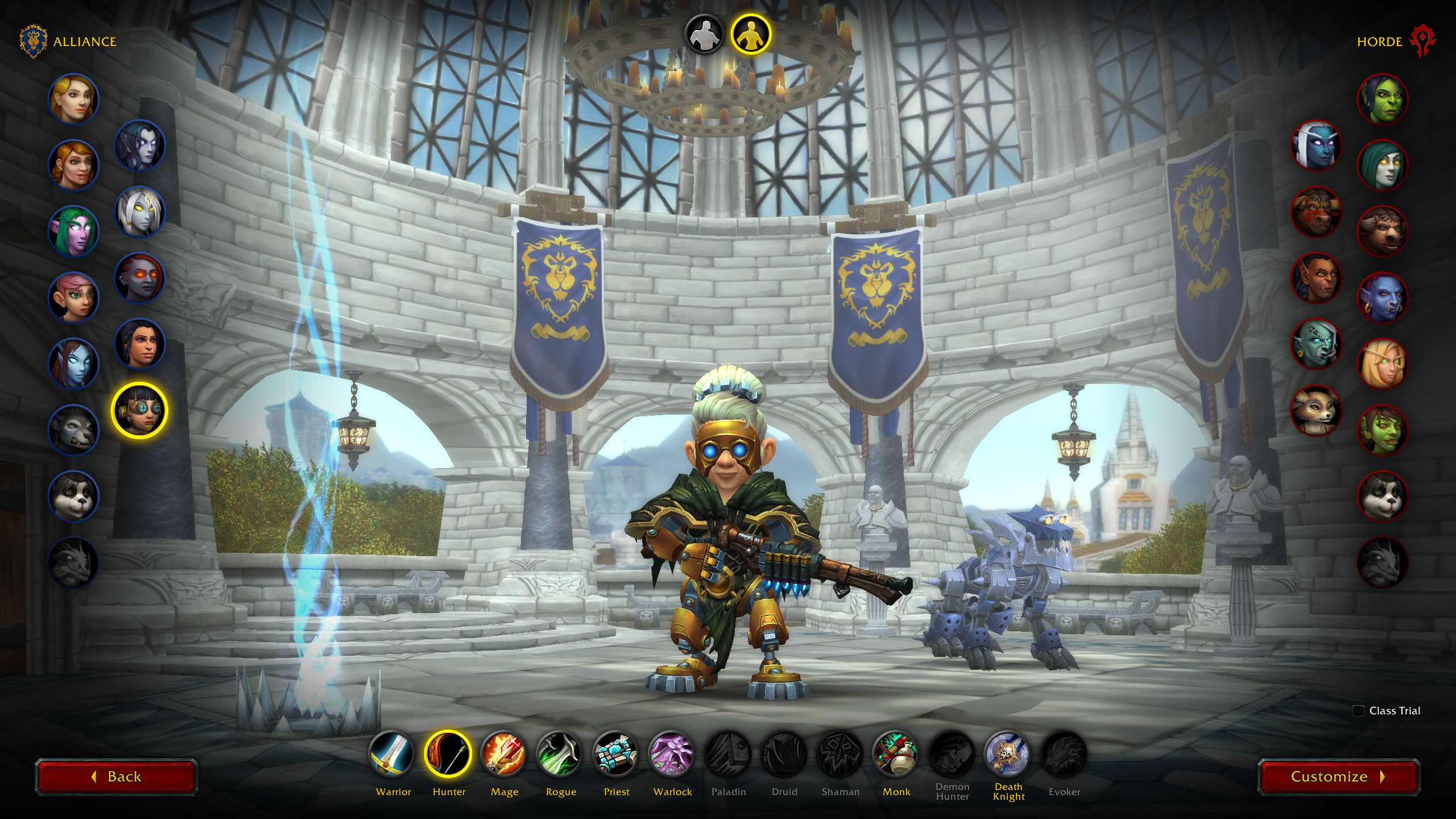 While you should pick any race you want as your Survival Hunter, if you’re looking for some extra benefits, here are some races that can provide them: 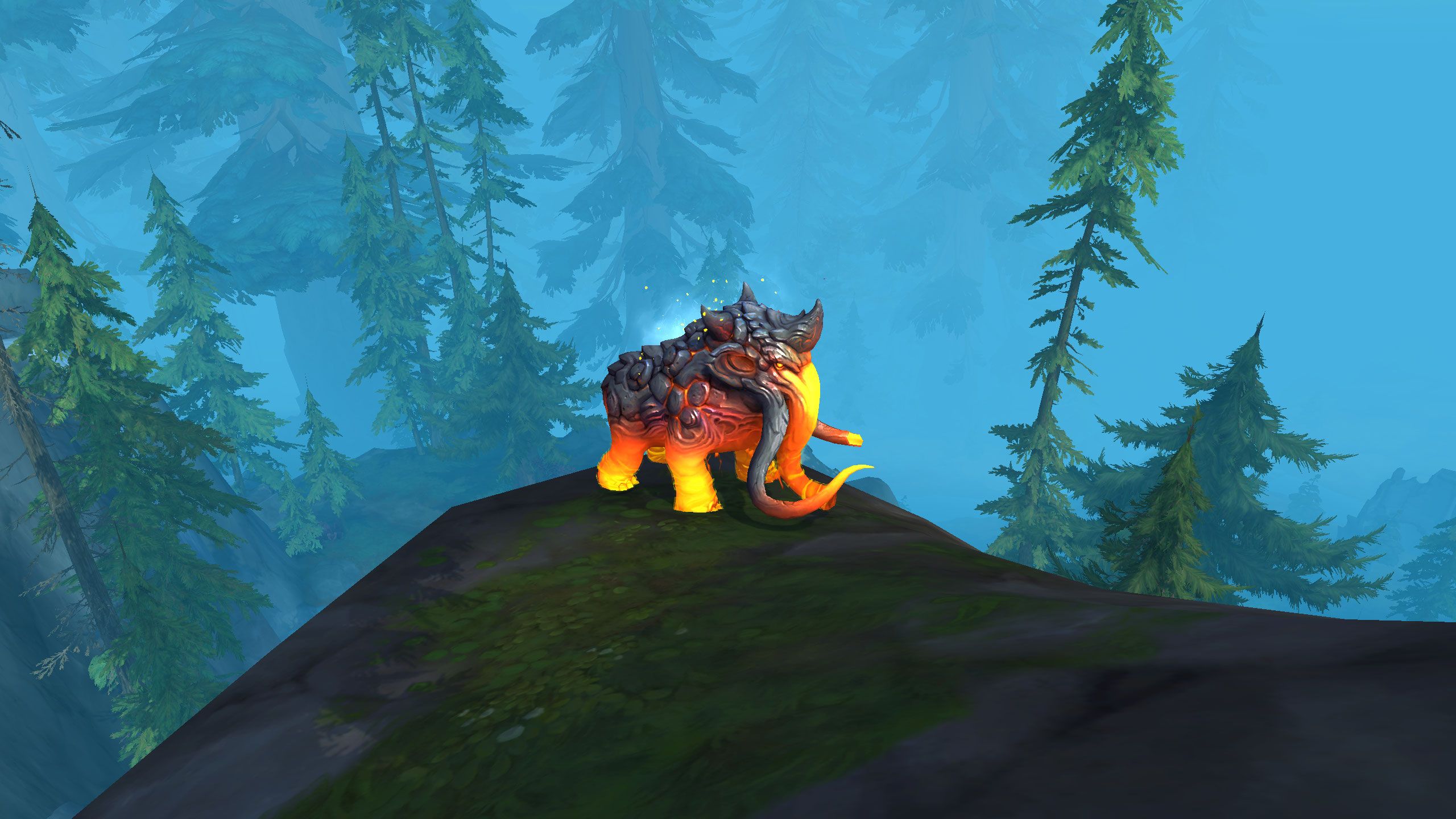 When it comes to taming the right beast, there are three types of pet families: Ferocity, Tenacity, and Cunning. Each provides you with a different active ability and passive effect. Generally speaking, your best bet is Tenacity for dungeon and raid content.

If your group requires a Lust, you should have a Ferocity pet to fulfill that need. 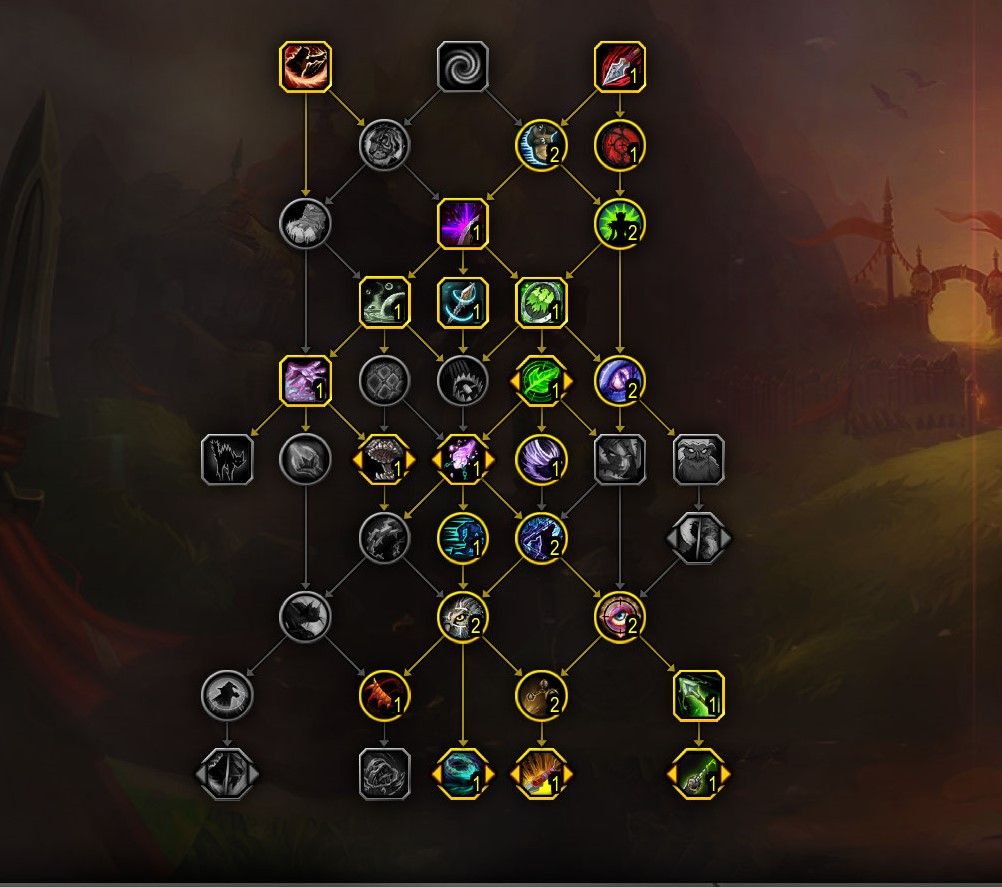 The above tree is a decent guideline to follow when it comes to the main tree for Hunters. Survival Hunters don’t have too much to offer when it comes to utility, and while their main class tree isn’t too flexible, it does have some wiggle room. There are a few talents taken in the tree above that you don’t necessarily need to always take, like Tranquilizing Shot, Intimidation, and Hunter’s Avoidance.

In lieu of these, Entrapment and Binding Shackles are nice tools to have, and it’s perfectly reasonable to stick two points into Rejuvenating Wind instead of just one. That said, Muzzle, Posthaste, and Pathfinding are all extremely important and should typically always be taken no matter what type of content you’re doing.

While leveling and while doing your world content, don’t worry too much about optimization. Instead, pick the talents you want to pick and try them out. You can change them anywhere, so be sure to play around with your options. This goes for the Survival talent tree as well. 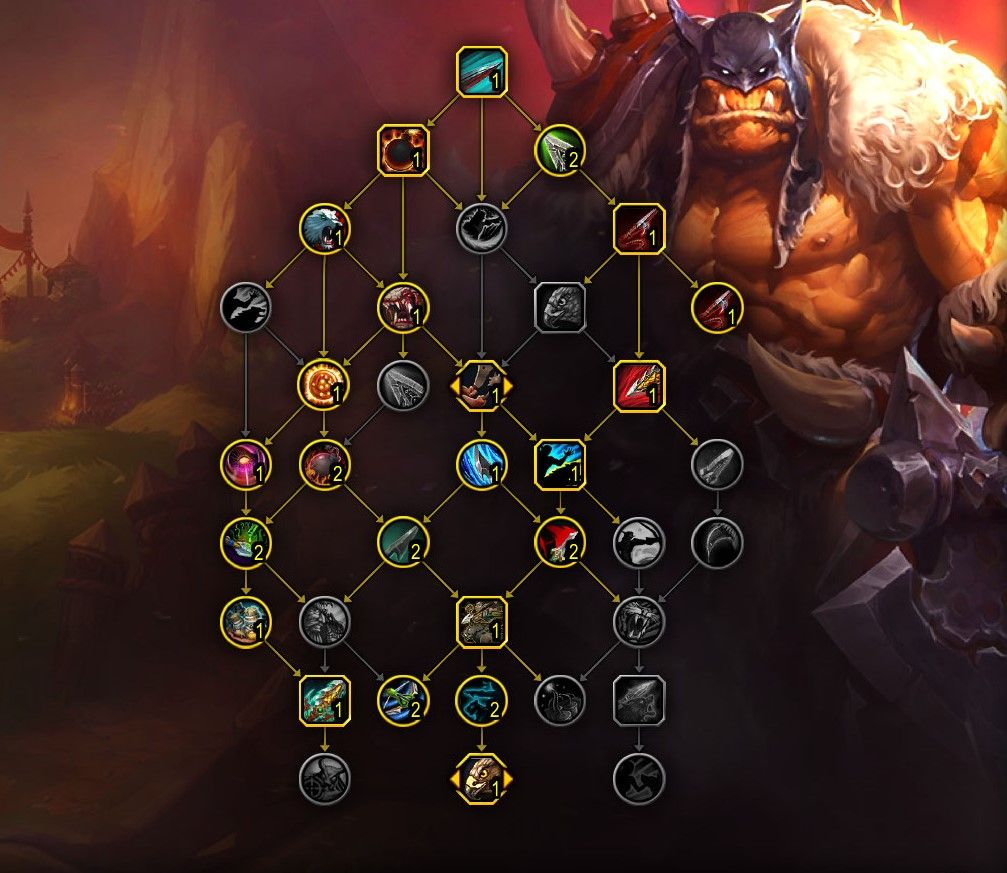 Even though Survival Hunters have weak area-of-effect capabilities compared to other classes, they can still pull off some decent damage if they talent well, an example of which is shown above. As such, the main talents you want to have are Butchery, Frenzy, Fury of the Eagle, and Birds of Prey (keystone). 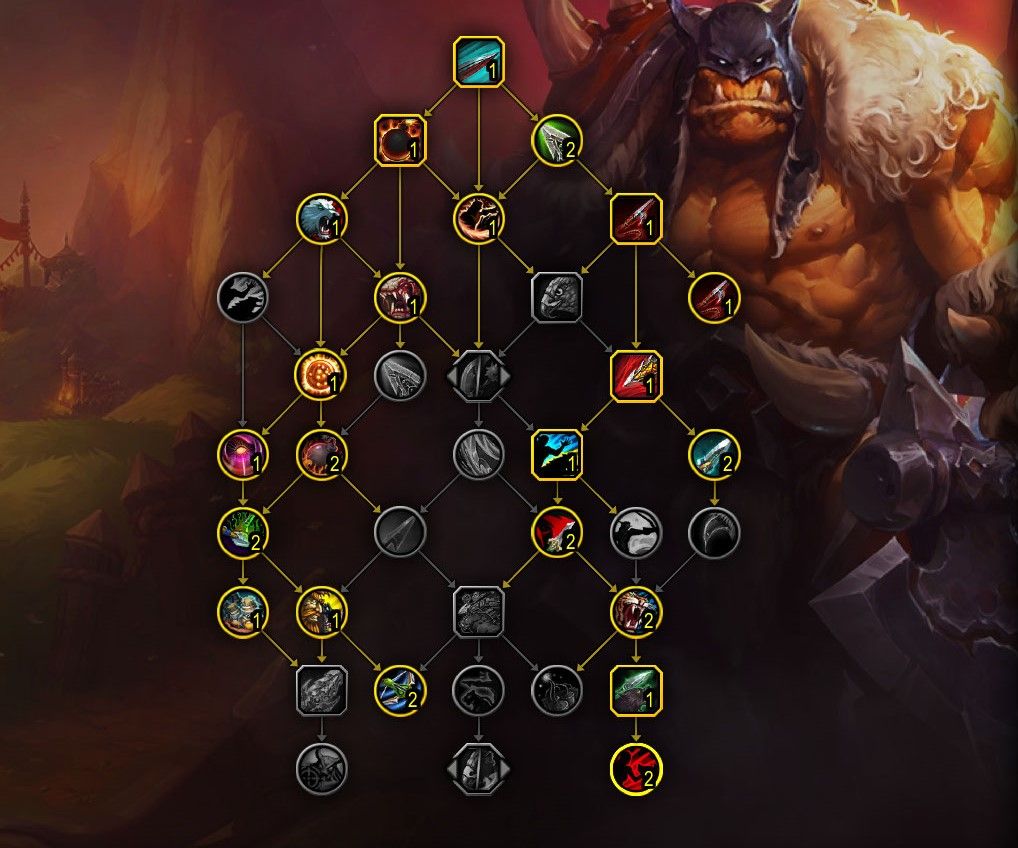 In the raid tree above, you'll notice that all the prominent area-of-effect talents are not taken, and this is where Survival Hunter truly shines. In replacing these area-of-effect talents, an emphasis is placed on the right side of the tree where Spearhead is. This big cooldown replaces Coordinated Assault since its effects are much more geared toward single-target damage, significantly buffing your Raptor Strike and Kill Command.

Across all types of PvE content (dungeons, raids, and general world content), there are a few talents in the Survival tree that you’ll want no matter what. 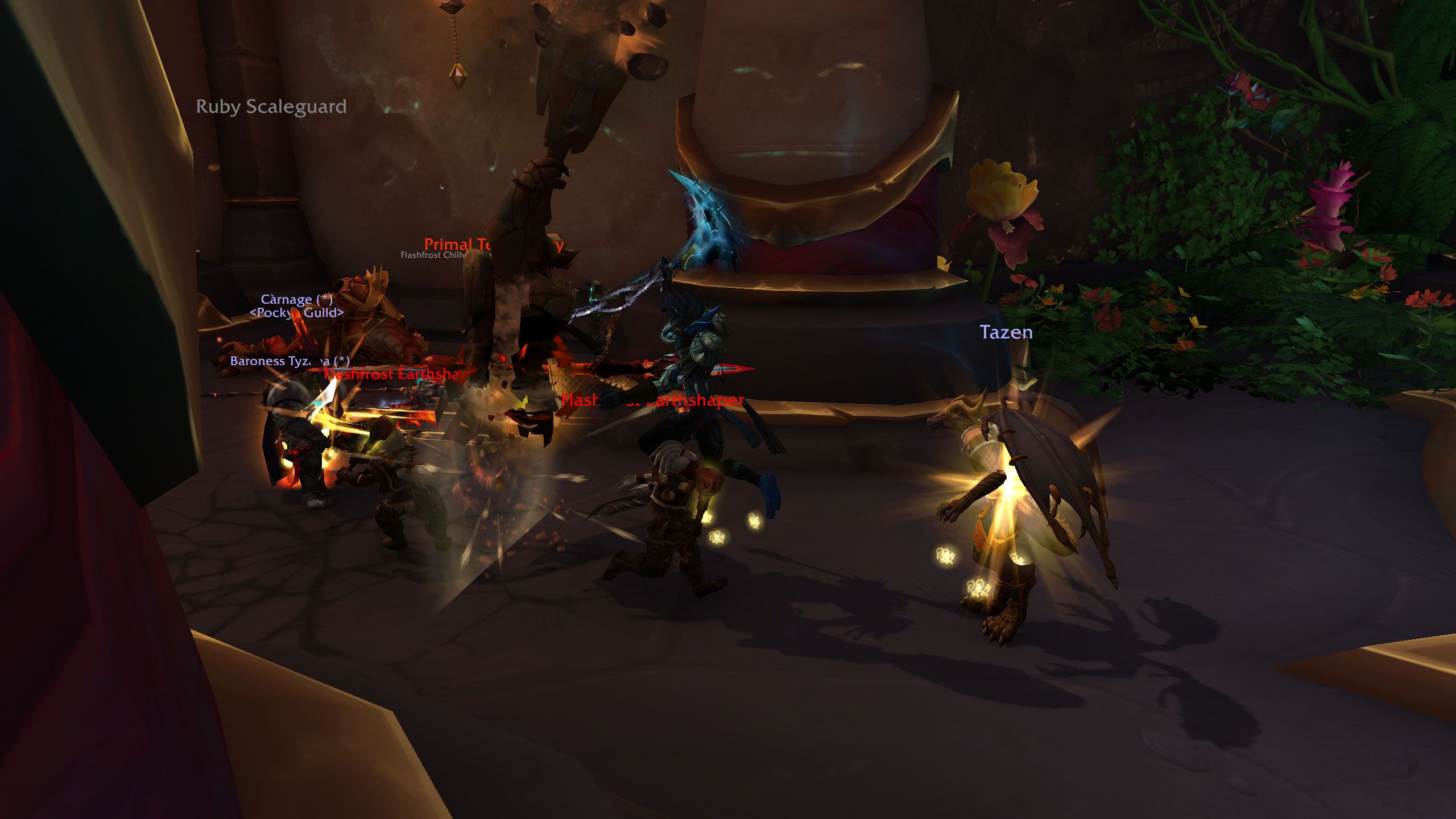 So, once you use your first Mongoose Bite, you’ve got fourteen seconds to get in as many more as you can before the window closes and the damage buff resets. This requires good Focus management with your Focus-generating abilities (Kill Command, Death Chakram, Flanking Strike) and good planning.

At the same time, you’ll want to make sure of two things:

Another great addon is one for Muzzle:

This allows you to silence your Focus Target (if you have one). This is extremely useful for fights where you need to interrupt a target that isn’t your primary target, as it removes the need to manually switch targets by either clicking or Tab-targeting.

Just remember that, unlike Counter Shot, which is the ranged silence spell of Beast Mastery and Marksmanship Hunters, Muzzle is a melee range silence, so make sure you’re close enough to your Focus Target when using this macro. 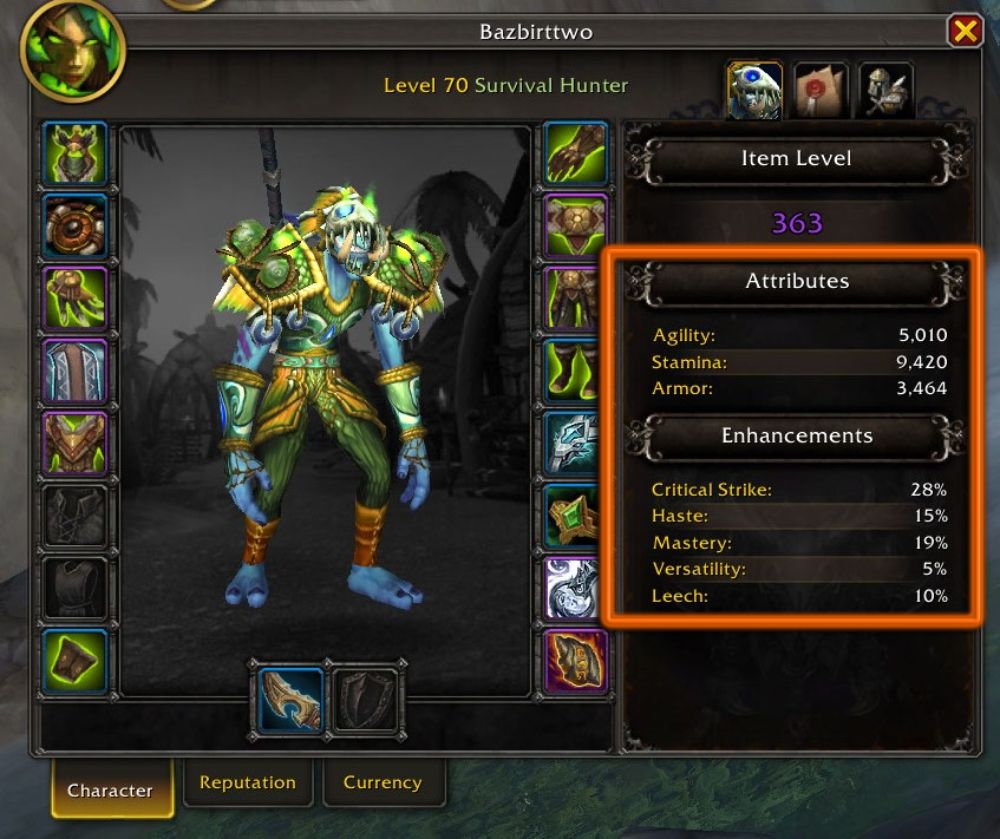 A Survival Hunter’s stat priority has a very slight variance with regard to area-of-effect versus single-target talent builds. Still, it's inconsequential in the grand scheme of things, especially on a more casual level.

Mastery increases the damage of your Focus-spending abilities. It’s less effective in area-of-effect encounters because most of your big area-of-effect abilities (Fury of the Eagle, Wildfire Bomb, Death Chakram) do not require you to spend Focus to use. Contrarily, your main single-target spell, Mongoose Bite (Serpent Sting is important too), is a Focus spender, putting much more of an emphasis on Mastery.

While your stat priorities differ slightly depending on whether your talent build is area-of-effect or single-target focused, haste and critical strike are still the two most important secondary stats.

As such, any gem that has both of these stats will suffice, namely Crafty Ysemerald (more Haste) or Crafty Alexstraszites (more Critical Strike) being stellar options. But in reality, you should pick up the gem with the more pressing stat you require, which will typically be haste.

Depending on what crafting tier level the gem is, it will offer different numbers of stats.

There are many enchants to choose from, but below are the most important ones that you should strive for no matter what. And again, remember that the value of the enchant depends on its crafting tier.

When it comes to the Reinforced Armor Kit, if you’re a Leatherworker, you can craft these up yourself, so that’s yet another reason to run that profession.

While you’re leveling, the best thing you can do is to utilize the quest rewards (or dungeon rewards if you’re dungeon grinding) as they improve, and don’t worry too much about your stats or item level.

Your professions can provide you with some good gear too. Ideally, as a Hunter, Skinning and Leatherworking should be your two primary professions, and as you quest, you’ll be doing plenty of Skinning. Thus, you can easily craft up some Mail gear as you level, but don’t worry too much about Item Level, at least not until you’re level 70.

Before the release of Mythic Plus and Raiding content, there are several key ways to gear up: Dungeons, World Quests, and crafting. Crafting gear goes up to 382 Item Level, and if you’re a crafter, it’ll be cheaper to hit that gear. Otherwise, regular Mythic dungeons will get you 372 gear, which is a close second. Here are some good pieces of gear to aim for in the new dungeons before the release of Mythic Plus and Raids: