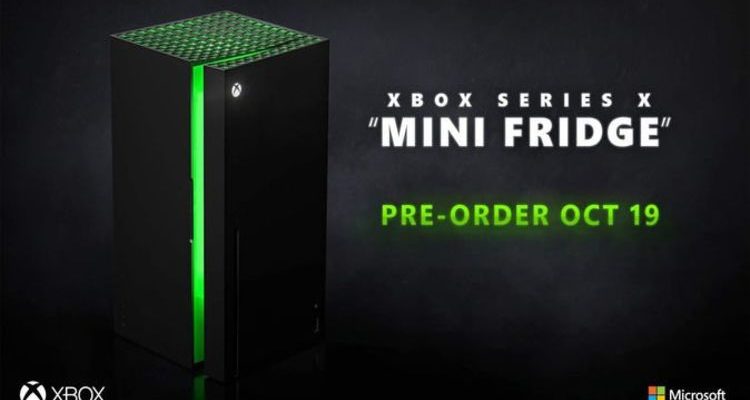 Xbox Series X stock remains hard to get and there’s no reason to think things are going to get any easier later this year.

But that doesn’t mean that all of Xbox’s product range is impossible to buy this year, with Microsoft confirming that its Xbox mini fridge will be sold in the UK.

The idea of an Xbox Series X fridge was born from the design and direct comparisons made between the console and kitchen appliance.

Microsoft then went the extra step of making a hybrid, before announcing they would launch a range of mini fridges.

Xbox mini fridge pre-orders will start on October 19 and will be available to buy in the UK from GAME, retailing at £89.99.

A new announcement shared by Microsoft confirmed the latest details on the product, explaining:

“The mini fridge, created in partnership with Ukonic!, gives “Xbox and Chill” a whole new meaning. With LEDs and surface-features made to resemble the Xbox Series X, your friends will be amazed while their thirst is quenched!

“The sleek matte-black tower holds up to 12 cans of your favorite beverage and has two shelves in the door, so you’ll be sure to have your favorite snacks at the ready. The front of the mini fridge also includes a USB port to charge devices and comes with a DC power adapter to enable the mini fridge to work on the go.

“Here just in time for the holidays, the Xbox “Mini Fridge” will go on pre-sale on October 19 and will arrive in multiple retailers globally in December 2021.

“In the first wave of production, the Xbox “Mini Fridge” will be available at Target and on Target.com for $99.99, our exclusive retailer in the US. Fans in Canada will also be able to purchase online via Target.com.”

Meanwhile, Xbox Series X stock remains hard to find in the UK, with only a few sporadic restocks happening over the past month.

While Xbox Series X restocks are few and far between, opportunities are still cropping up for those hoping to bag the powerful next-gen console.

Earlier this week, the official Microsoft Store opened orders once again for the Xbox Series X, however, this restock sold out in a matter of minutes.

The big news is that the Smyths Toys website says it’s expecting another Xbox Series X console restock at some point this month.

However, no firm date for that next Xbox Series X restock has been shared yet online or for in-store purchases.