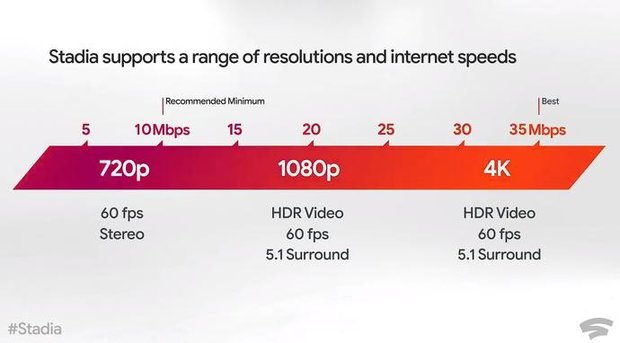 Google Stadia streams games over the internet and requires a fast connection to deliver latency and visual quality similar to home gaming hardware.

For 4K gaming, Google says broadband speeds of 35Mbps will be required, and for 1080p it will need a download speed around 25Mbps.

This means that to provide an experience approximating a dedicated home console or PC, gamers will need at least an entry-level fibre optic broadband connection.

However, of the survey respondents who carried out a speed test on their home connection almost a third (29%) failed to reach the 35Mbps required for 4K gaming, and 17% reported speeds under 20Mbps.

Of those who said they were not interested in Stadia, 34% cited their broadband speed as the reason.

Even among those who are interested, 26% think their broadband will be too slow, and 71% are concerned that performance and visual quality will be compromised.

Following the results of the survey, Wesley Yin-Poole, Deputy Editor of Eurogamer, said:

“Advertised broadband speeds are one thing, but the reality for many people is a slower internet. If Google really wants Stadia to take off as a mainstream global platform for millions to play video games on, it’ll have to be mindful of the millions whose internet may struggle to provide a console-quality experience.”

“Google’s move into the gaming market is good news for anyone struggling with the initial high cost of entry for the latest games. However, in order to enjoy games with a similar performance to a home console it seems likely that fibre optic broadband will be a requirement, otherwise players are better off with dedicated gaming hardware where performance isn’t wholly reliant on broadband.”

Although there’s a lot of excitement around Google Stadia, based on the evidence we’ve seen, for now, the service appears to be nothing more than an enticing pipe dream.

At least until we can get BT or Virgin call out to improve those pipes up and down the country.