The Ancient Gear Archetype has been a fan favorite since its introduction in the Yu-Gi-Oh! GX anime. It's one of the few Archetypes that multiple characters across the series have used, being featured heavily during Arc V as well.

In the paper game, Ancient Gear is a popular Archetype that still sees support to this day. Duel Links players are no stranger to how powerful Ancient Gear can be, and in Master Duel, they have a lot more toys to play with. Ancient Gear decks generally want to make a big Monster and hit hard, and it's something the deck can do with ease. 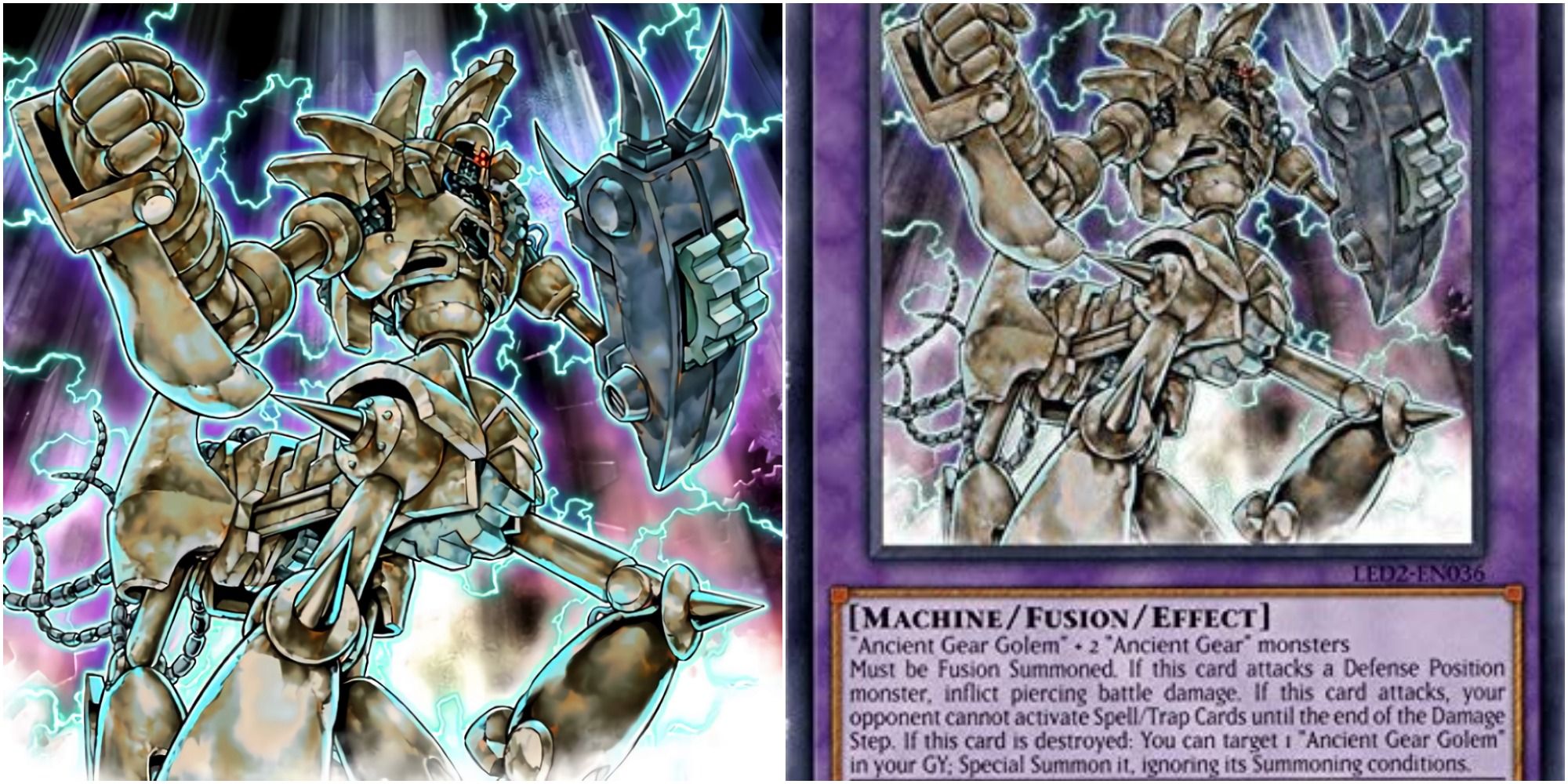 Defense Position Monsters aren't safe, as Ultimate Ancient Gear Golem will inflict piercing damage if it ever attacks one. It will also shut down any backrow while it is attacking. If it ever gets destroyed by any means, you can revive an Ancient Gear Golem from your Graveyard. 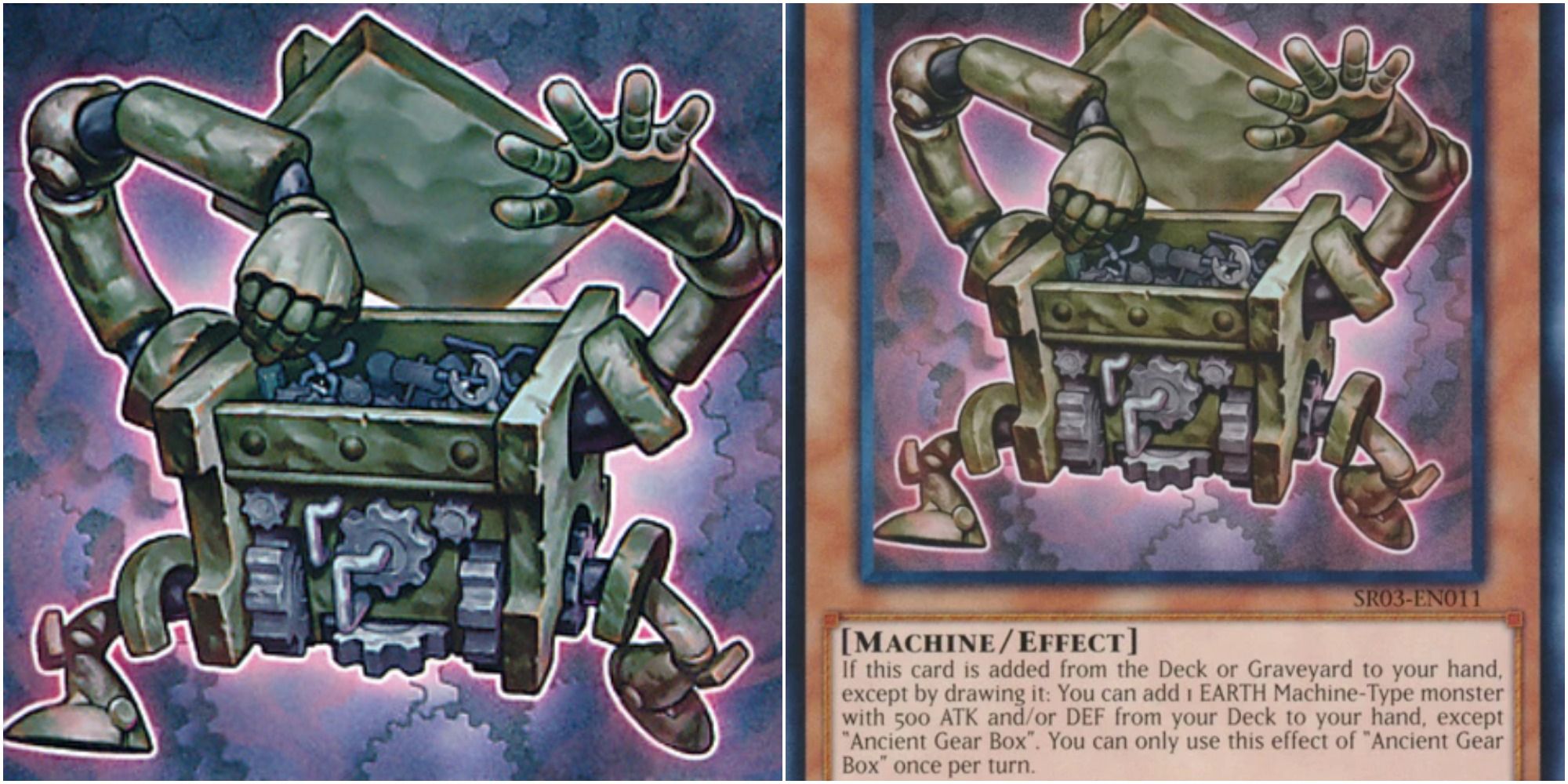 Ancient Gear Box is a card that you will almost always be searching for when you search out an Ancient Gear card. Whenever it is added to the hand from either the deck or Graveyard, you can add another Earth Machine Monster from your deck to your hand so long as it has 500 or less Attack or Defense. 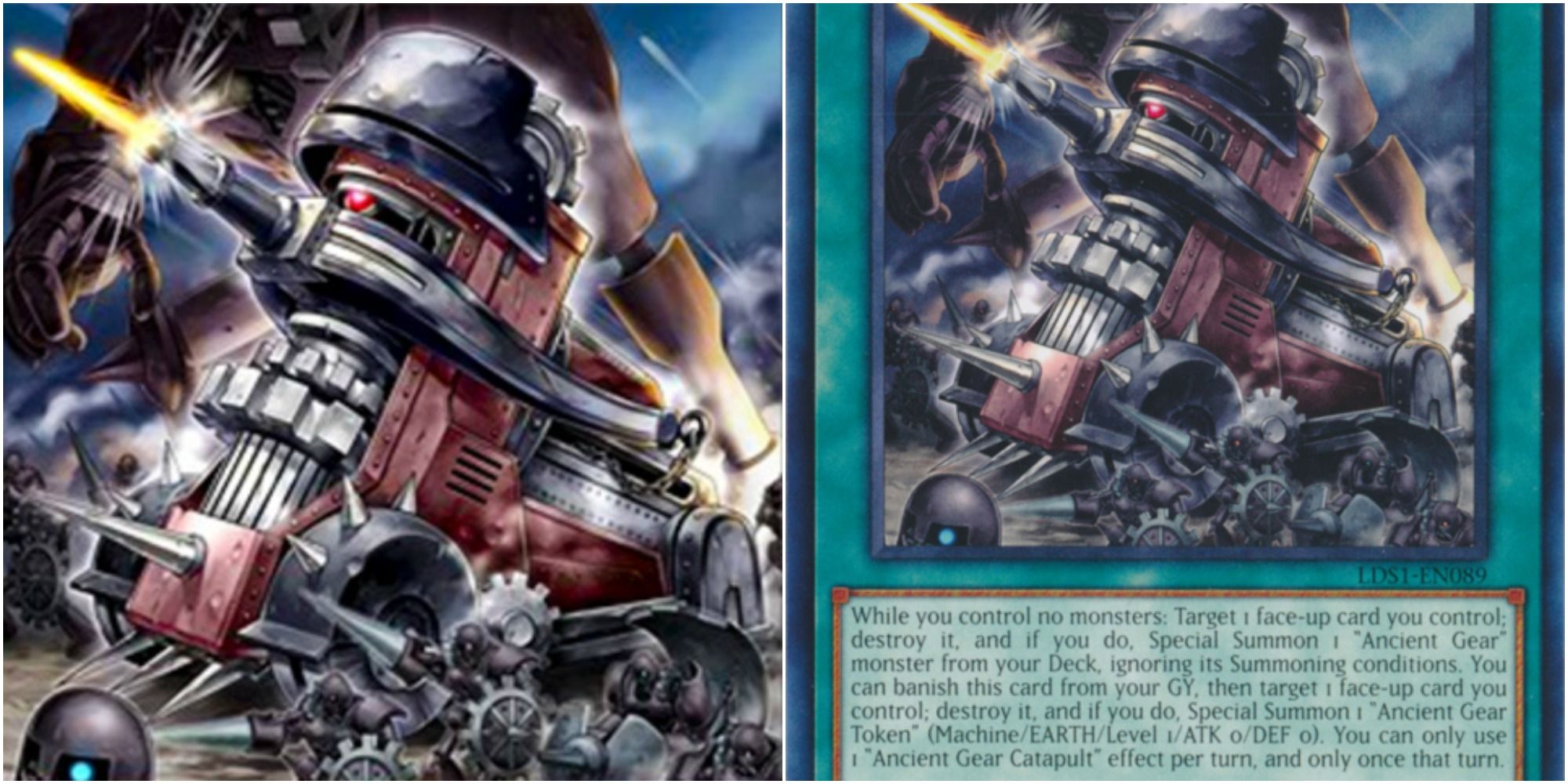 Ancient Gear Catapult at first glance may seem like it's a steep cost for a relatively simple effect. By destroying a face-up card you control, you can special summon any Ancient Gear Monster from your deck while ignoring its summoning conditions. This guarantees you'll get a Monster, but since most Spell cards special summon a Monster when they're destroyed, you'll usually end up with two.

In the Graveyard, Ancient Gear Catapult can net you a token by banishing itself and destroying a face-up card to help you with tribute summoning. This can even proc some of your other effects that trigger off of being destroyed. 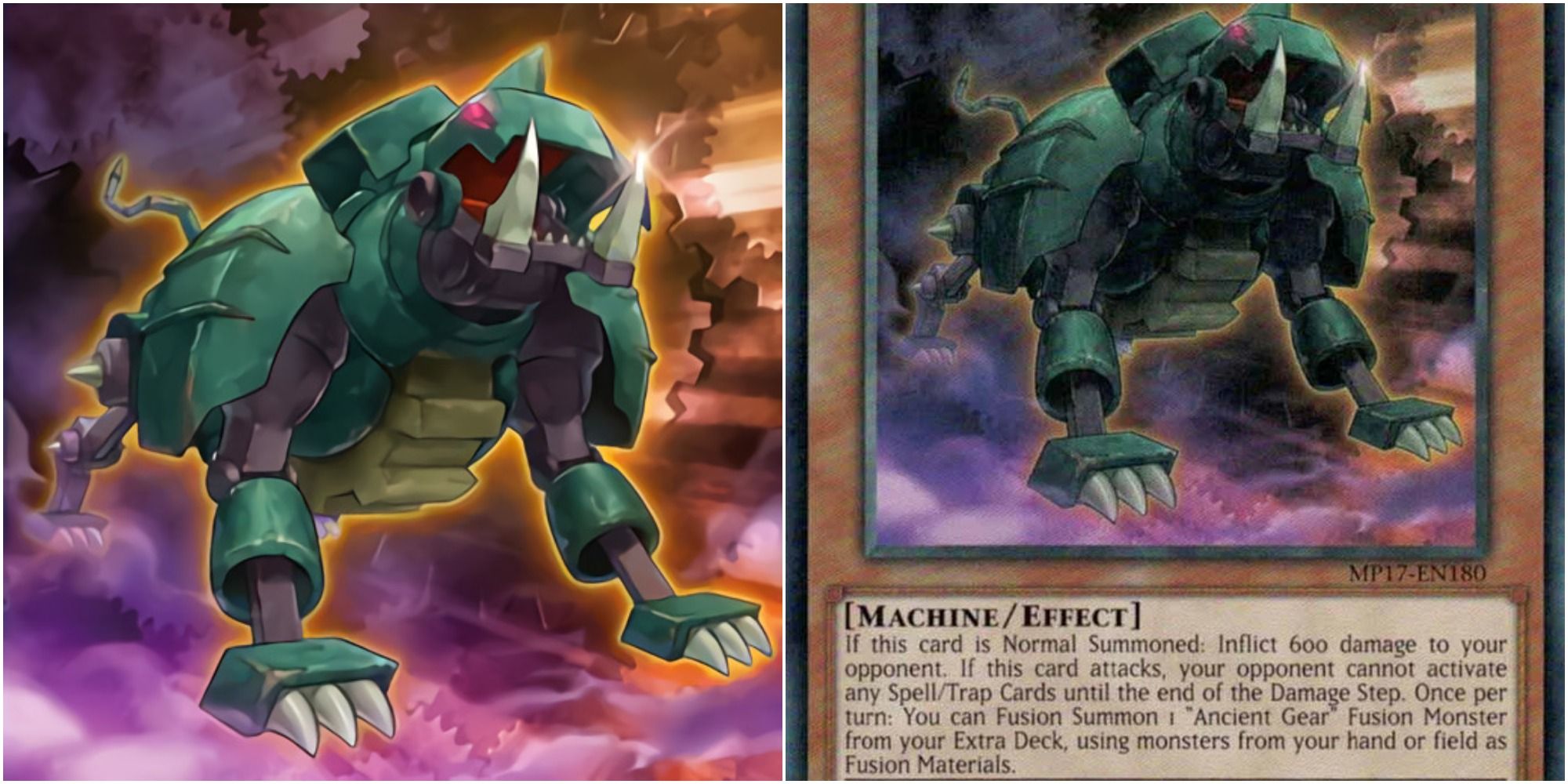 When it's normal summoned, you even get a small 600 burn damage done to your opponent. There aren't many spectacular Normal Summon in the Ancient Gear Archetype, and with Ancient Gear Hunting Hound, you skip the need to dig for a Fusion Spell to make an OTK that much easier. 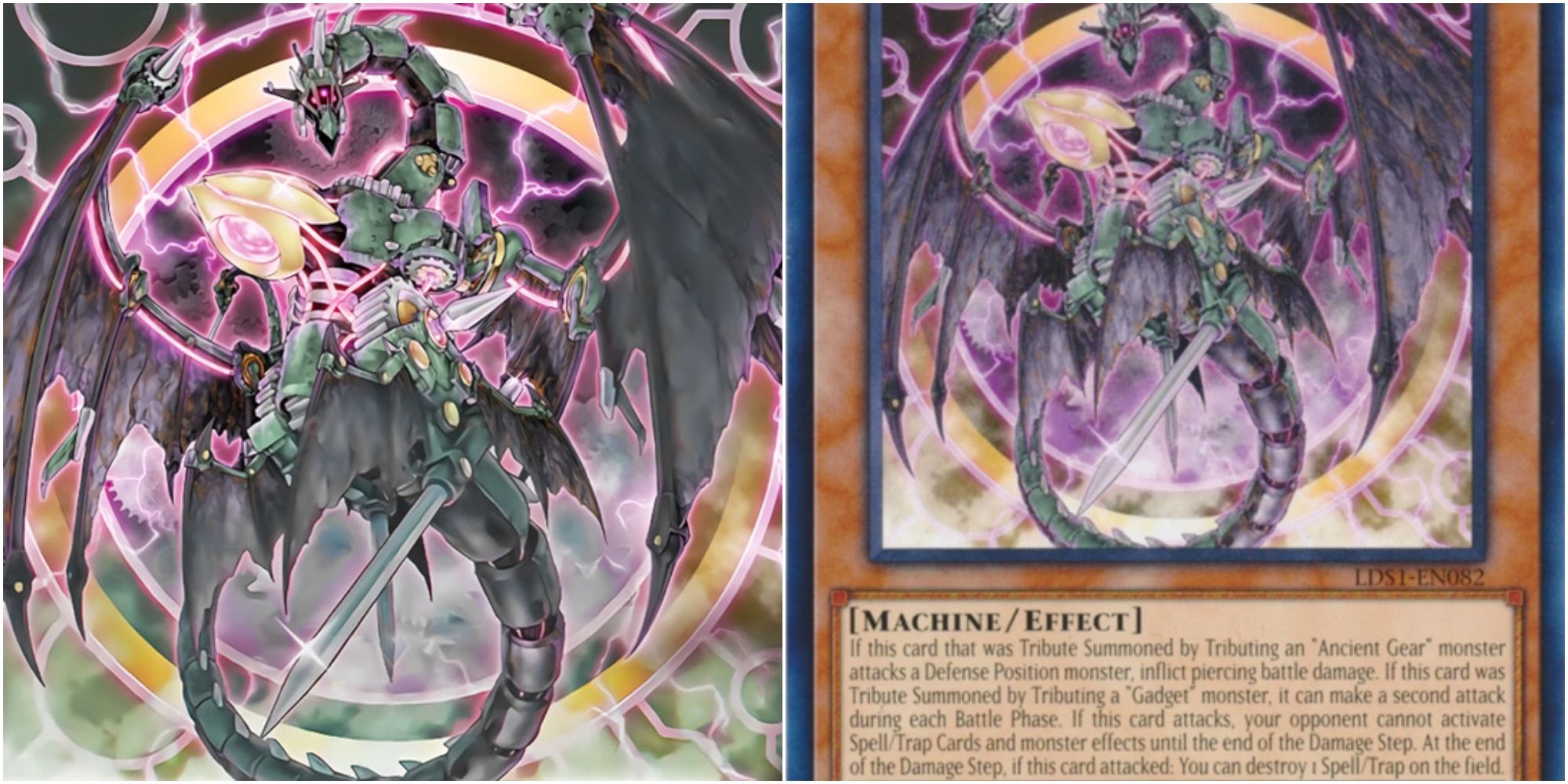 This effect is especially good in Ancient Gear decks, as it can pop the cards that special summon more Monsters onto the field. Ancient Gear Reactor Dragon can chain into other copies of itself, quickly flooding the board with powerful Monsters you can use for Extra Deck plays. 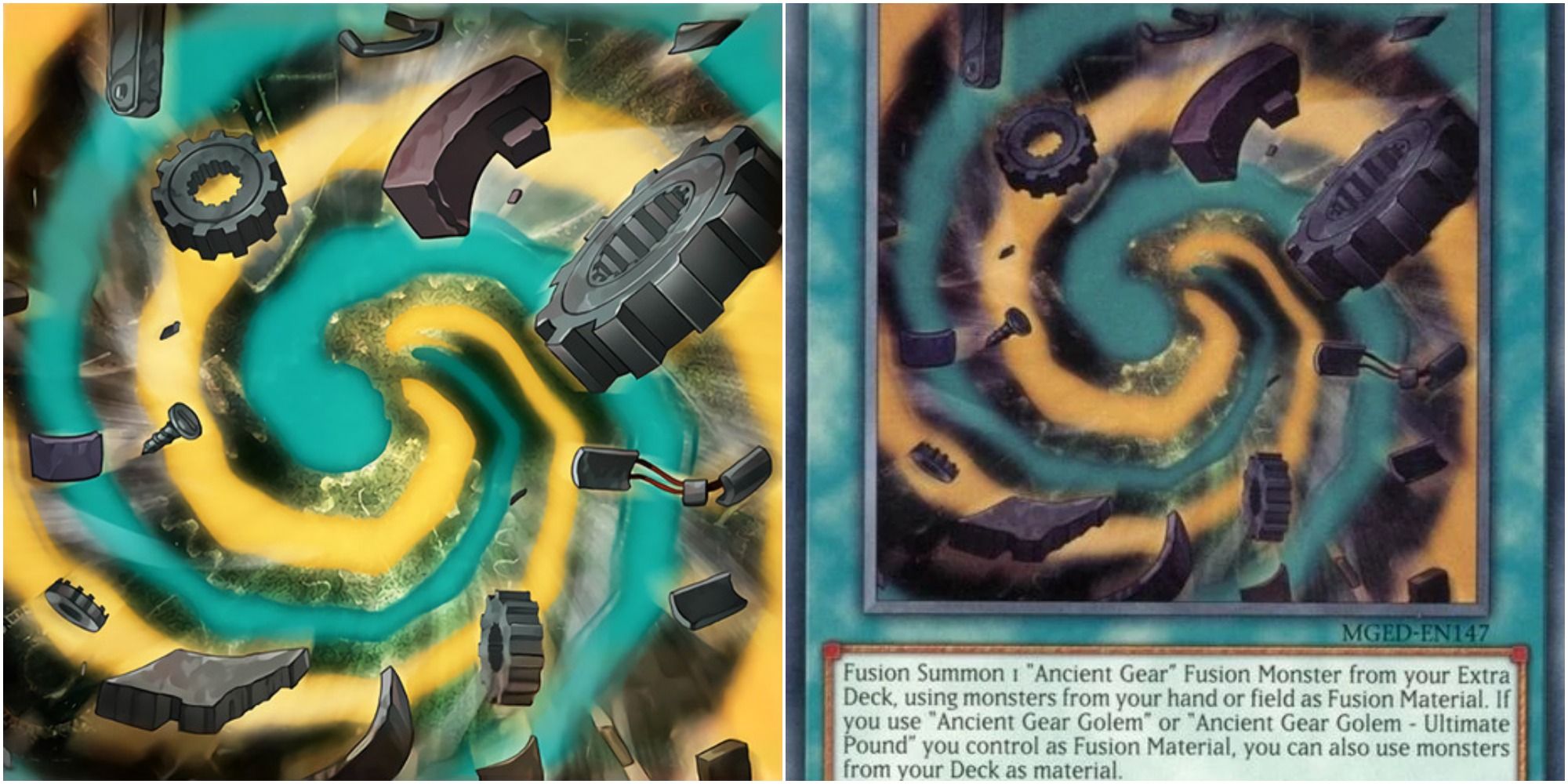 Fusion Spells are generally not fantastic since you need all the materials readily available for you in your hand to use. However, Ancient Gear Fusion can get around this restriction and use materials straight from your deck, which is the best effect a Fusion Spell can have. 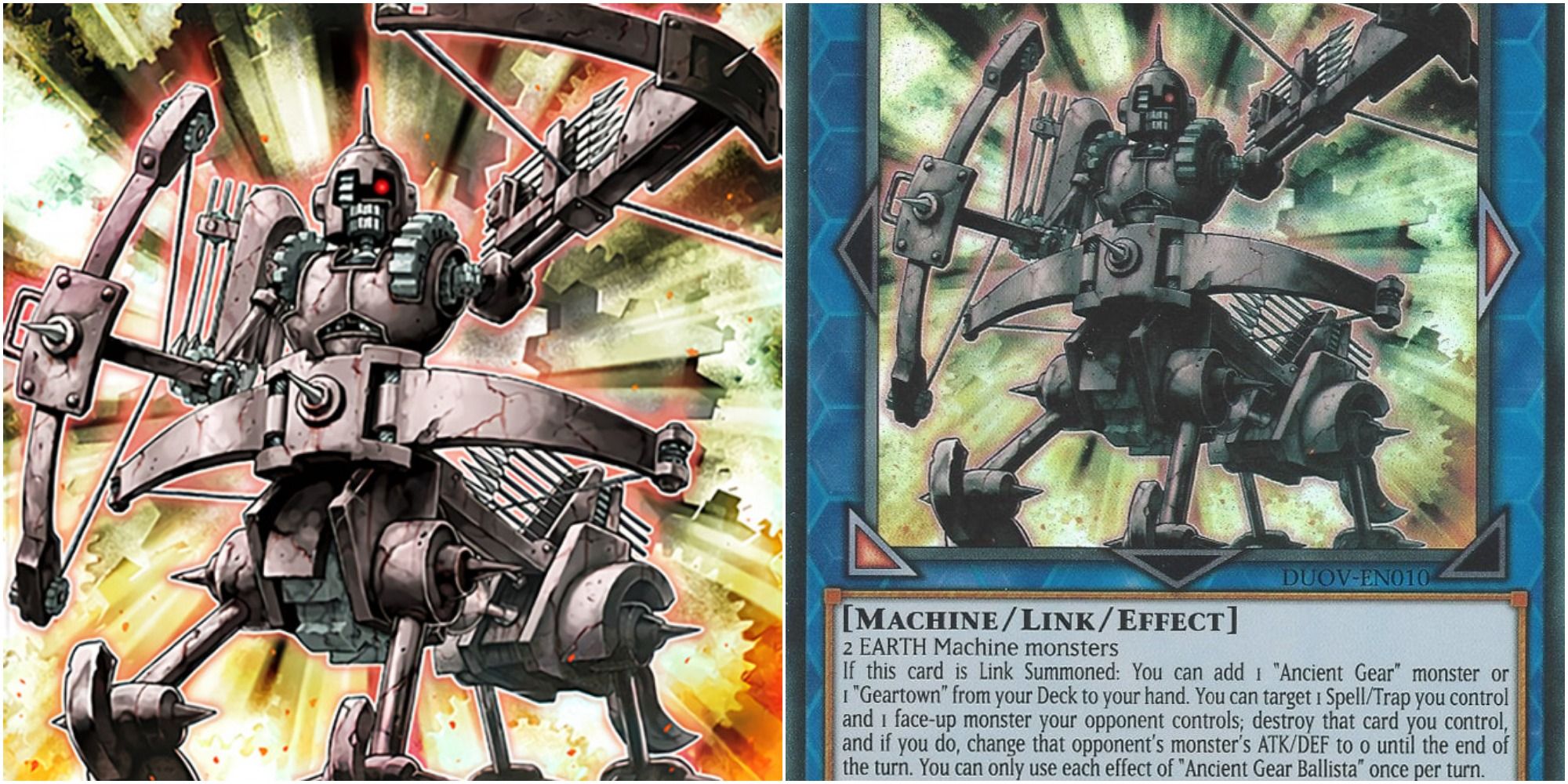 It is very easy to make as well, only requiring two Earth Machine Monsters, not even needing Ancient Gear Monsters for its Link Summon. Ancient Gear Balista does about everything Ancient Gears need to do to get rolling, all on one card. 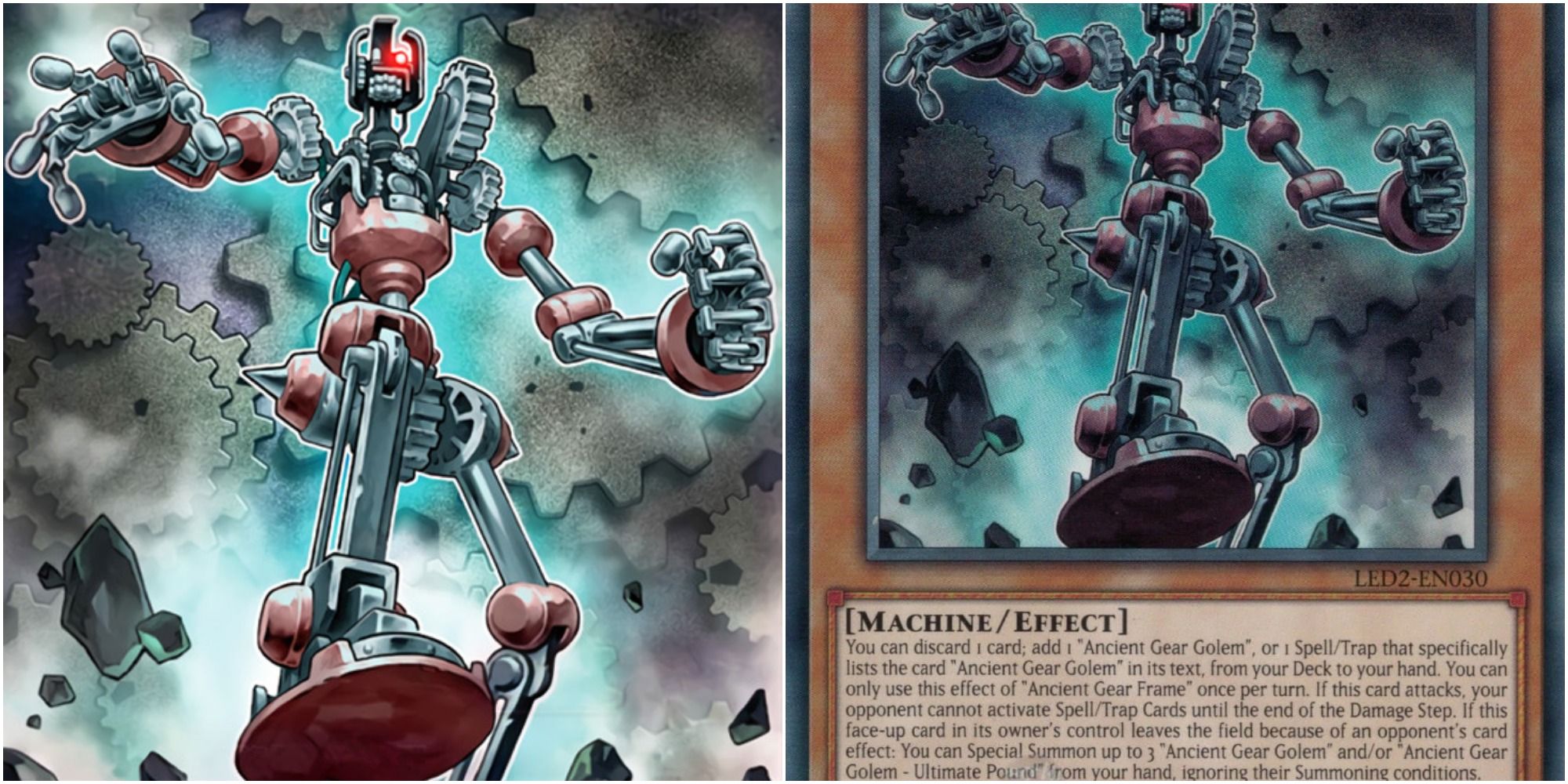 Ancient Gear Frame is one of the main searchers for the Archetype. By discarding one card, it will search out your deck for an Ancient Gear Golem or any Spell or Trap card that lists it in its text. 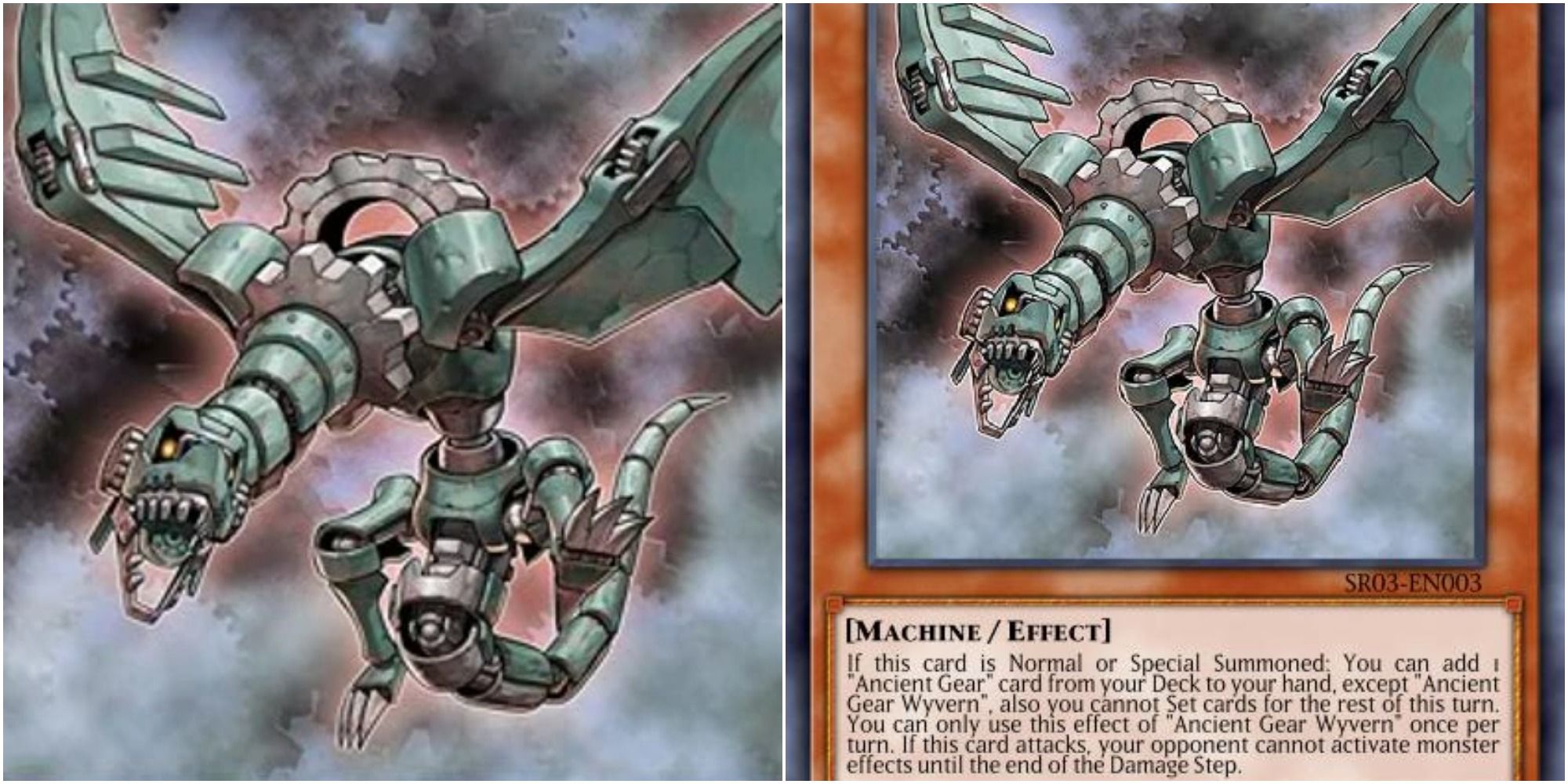 Ancient Gear Wyvern is one of the main reasons the deck functions. It lets you search out for any Ancient Gear card except Geartown, and allows you to set up for your OTK easily to find the missing parts of your combo pieces. 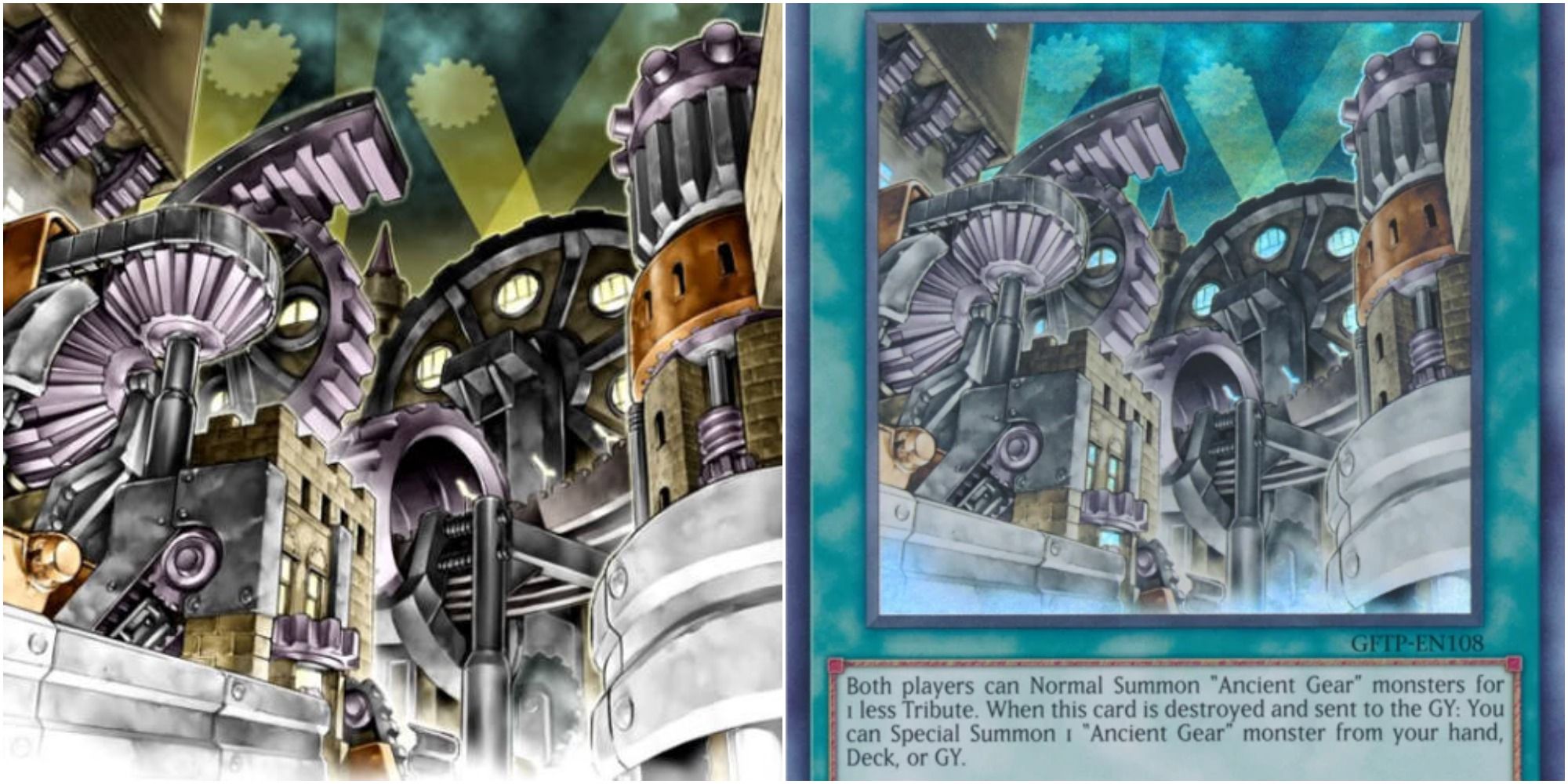 Geartown is one of the most important pieces to any Ancient Gear deck. It allows both players to tribute summon Ancient Gear Monsters for one less tribute. You likely won't be playing an Ancient Gear mirror match, so this will hardly ever affect your opponent.

Geartown's more important effect is the one it has to special summon an Ancient Gear Monster from your deck, Graveyard, or hand if its ever destroyed. It's the main target to destroy with your own cards to get a search out. Be careful though, since it's a "when" effect it can miss timing if it's not the first effect in a Chain.