In the Pokémon video games, the shape-shifting Ditto can transform into its enemy, right down to having an identical moveset. The idea may sound scary on paper, but most of the time, players just use Ditto as breeding stock to make more of their favorite monsters. The Detective Pikachu movie, on the other hand, makes such good use of Ditto’s powers that I literally yelled in the movie theater as the moment was unfolding.

Based on Ditto’s Pokedex entries, we know that the pink blob can transform into anything, living or inanimate. When it’s a Pokémon enemy, Ditto becomes a perfect copy. The entry for Pokémon Y states that Ditto can “recombine its own cellular structure to transform into other life-forms,” which means that the power isn’t limited to other Pokémon. Ostensibly, Ditto can turn into other animals — or perhaps other human beings. We’re also told that Ditto can maintain the disguise if it doesn’t laugh, and that if it’s transforming into something based on memory, it might get some details wrong. And we know that Ditto can turn into things too, because when it goes to sleep, it shifts into a rock to avoid enemies.

In the games, we almost never see most of this lore play out. Fortunately, the people making the Detective Pikachu movie knew better than to leave such a juicy ability on the cutting room floor. Instead, near the end of the film we find out that Ditto has been masquerading as the villain’s son, as well as the villain’s pink-haired assistant. Ditto is able to mask this truth throughout the movie by wearing glasses, but in a pivotal moment, those spectacles come off. And when they do, it’s horrifying: you see that Ditto’s tiny, beady eyes are staring back at the audience. Despite this silent character appearing throughout the movie, this turn is completely unexpected. 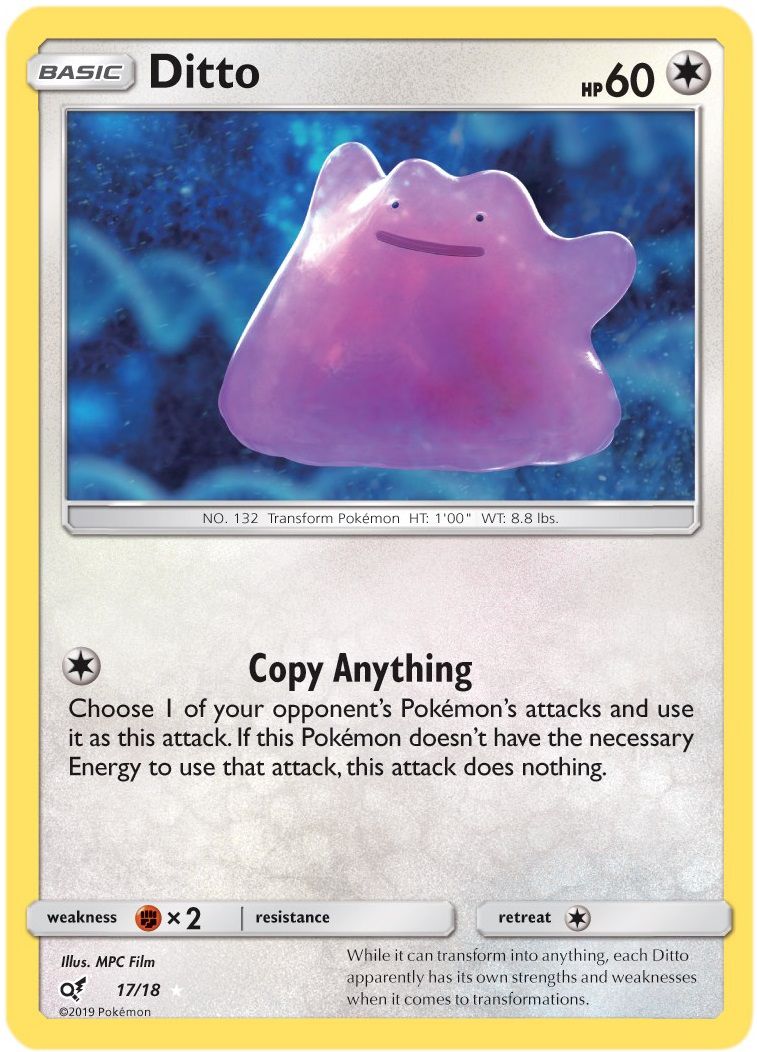 “It was a fun misdirect,” says Rob Letterman, Detective Pikachu’s director. “It’s a very unique Pokémon character, so that was fun to just drop it in. Those eyes are so weird and it was sort of a cool idea that kept growing.”

Given that Detective Pikachu is a mystery, Ditto seemed like a perfect fit for the story according to screenwriter Dan Hernandez.

“You have a Pokémon who can disguise itself!” Hernandez says. “From early on, that was a perfect twist and reveal moment, just built into a Pokemon.”

It’s not just that Ditto made for a good sleight of hand in Detective Pikachu. What I love about how Detective Pikachu uses Ditto is that it perfectly captures how wild it would be for a Pokémon to shapeshift in a battle. Near the end of the movie, when Tim Goodman, the protagonist, and Pikachu are trying to stop Rime City from falling into chaos, they have to fight a Ditto two-on-one. And as it turns out, it’s completely bonkers to have a Ditto use its ability to the fullest.

Throughout the battle, Ditto seamlessly transforms into behemoths like Charizard and Machamp, which can wreck anything in their paths. When Ditto is thrown into the air, it just turns into a flying Pokémon. Ditto turns into multiple things over the span of seconds, but in the games, Ditto can only transform once per turn — and only into the enemy it’s facing. Technically, there are way more powerful Pokémon in the repertoire to pull from, but Ditto’s ability to turn into any of them at a moment’s notice, when it needs to, makes it possibly the most deadly enemy to fight. But you never get this feeling during the games; for the most part, Ditto feels kind of useless, despite what the lore says.

This is exactly what makes Detective Pikachu such a perfect adaptation of Pokémon. Not only does the film stay true to the source material, but does it so deftly that it’s able to surprise even veteran fans who know nearly everything about the franchise in the process.