Now that Fire Emblem: Three Houses has been out for a while, I’ve been able to track changes in how fans enjoy the game. And, contrary to the Edelgard trend near the release, a new top character has emerged: Dorothea, the flirty songstress.

[Note: Spoilers for Dorothea’s storyline ahead!]

As of this week, Dorothea is the most-used character in battle: 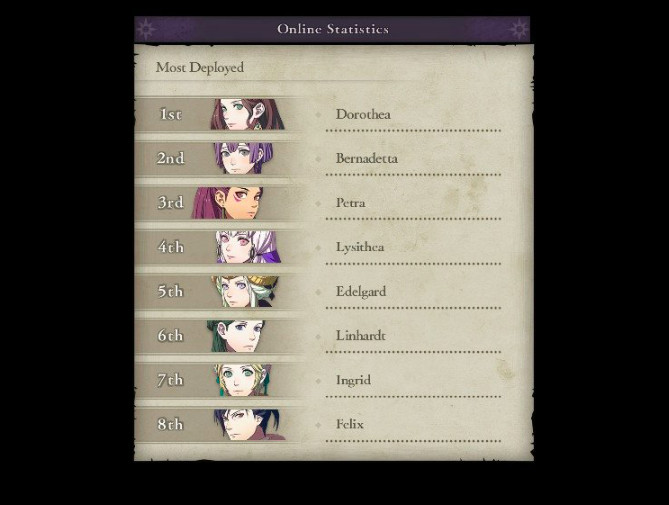 She’s the most frequent volunteer for skill-raising events: 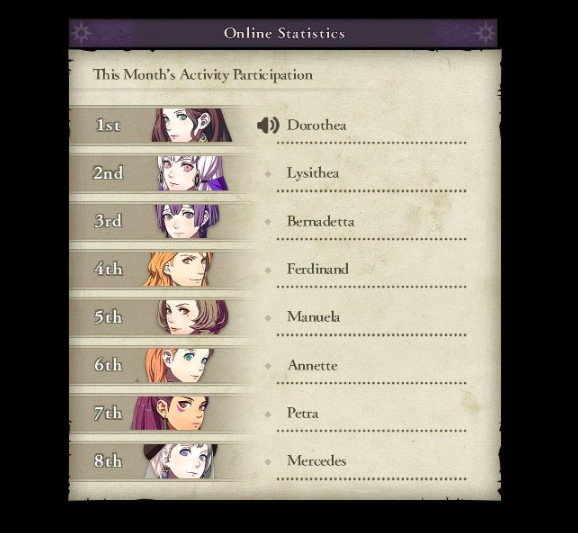 For gifts, Dorothea drops down to second place, under Lysithea — but it’s clear that most players still want to be under the brunette’s good graces: 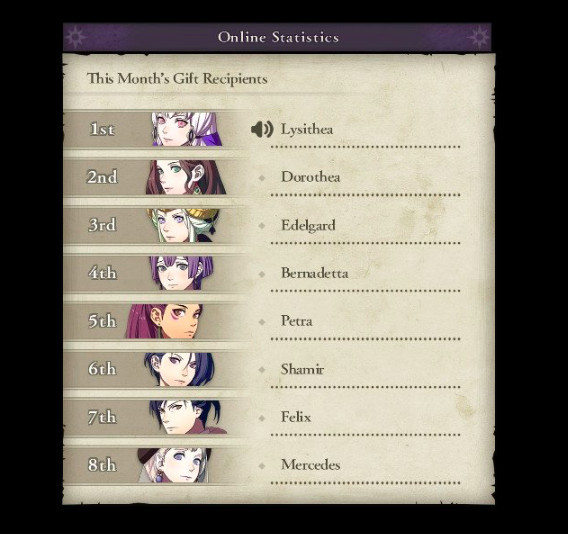 And, for those intimate conversations held over sweets, Dorothea still cracks the top three: 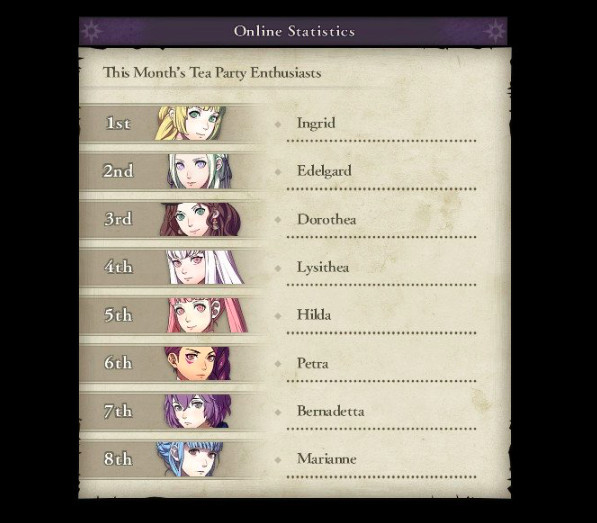 Together, this paints a solid picture: Three Houses players are busy wining, dining, and charming Dorothea, either in the hopes of recruiting her or getting to know her better. Curiously, if we look at the wider list for all these stats, it seems that Black Eagles characters are still likely the most sought-after class — but within that, Dorothea still reigns supreme.

So, what is it about Dorothea that’s got the Fire Emblem fandom in a frenzy? This might sound ridiculous, but the first thing that draws eyes to her is the fact that she’s the only character that is wearing a hat. It’s a cute hat, too.

It also helps that Dorothea is, well, attractive. Obviously, something like that is subjective, but if you get to know her, it seems clear that Intelligent Systems was very deliberate with Dorothea’s character design. Her backstory is that she’s a commoner who becomes a beloved songstress who is famed both for her voice and beauty. But the success leaves a sour taste in Dorothea’s mouth. She tells Byleth, the protagonist, that while she was in the opera, she was never sure who was interested in her as a person, and who was merely mesmerized by other more superficial features.

In my game, I’ve spent a considerable amount of time beefing up her support conversations, because she has some of the best exchanges with the cast. Part of it is the flirt factor — Dorothea knows how to win people over, and it’s fun to watch her have her way in the academy. It’s especially spicy to watch her get at some of the other female cast members.

But leaving it at Dorothea’s looks and charms still doesn’t fully explain her popularity. That’s just what initially draws people in. What keeps them there, though, is Dorothea’s personality.

“She’s an underdog in a society with a strict class structure,” said Dorothea fan Alex Rockatansky on Twitter. As a commoner, Dorothea’s outlook on Fodlan is an unusual one. Dorothea will openly talk about wanting to find a good partner who can take care of her, because she knows that one day, her beauty will fade and she’ll no longer be able to sing. She knows that in this society, her value is directly proportional to how much men desire her — and rather than being at the mercy of those forces, she’s choosing to take charge and make use of her assets as best she can, while she can. Dorothea grew up with nothing, and hell be damned if she’s going back to it.

This class consciousness permeates everything about Dorothea, and it makes for some amazing exchanges with other characters. When she talks to nobles like Ferdinand who have never truly had to work a day in their lives, or jerks like Felix, who believe she’s nothing more than a love-obsessed airhead, she makes sure to put them in their place. It’s delightful to watch, especially because she’s picking fights as a commoner — which is to say, she has the most to lose here.

But Dorothea isn’t jaded by the suffocating class structures. Actually, she’s one of the kindest members in the entire cast, often taking care to support those closest around her (who are denoted by adorable nicknames that she gives out). Her heart is as big as her singing range.

Out of all the relationships I’ve developed in Three Houses, my favorite has to be the one between Manuela and Dorothea. Manuela is one of the fiercest and most capable characters in the cast, but nearly everyone treats her as if she’s a worthless piece of garbage. Manuela’s sin? She drinks and can’t find a man. The whole thing is outrageous, and Dorothea knows it. Rather than making fun of her, Dorothea reveals that Manuela is the reason she picked up singing in the first place. Later, when Manuela left her opera company, the move inspires Dorothea to follow in her footsteps and try for the officer’s academy. If you build their supports enough, the two eventually decide to stop looking for the perfect man and instead just live the rest of their lives together — because really, who could compare to either of them?

It’s amazing. I ate it up. I can’t believe any of this happens in a Nintendo game.

And then, on top of all of that, Dorothea can be a monster on the battlefield. In my game, the songstress has learned the move “Meteor,” a magic maneuver that has huge range, power, and can harm multiple enemies at once. I can’t help but giggle with delight as I crush my enemies from across the map with her. Dorothea’s sheer power never gets old.

As Dorothea fan Nicholas McHale pointed out to me on Twitter, Dorothea can “potentially hurl a meteor at the Pope.” What else do you need, really?

Kojima Productions Is Teasing Something, Fans Think It's Silent Hills

Destiny 2: The history of Trials of Osiris
We and our partners use cookies on this site to improve our service, perform analytics, personalize advertising, measure advertising performance, and remember website preferences.Ok