Ubisoft has announced the date and time of their E3 2019 press conference. 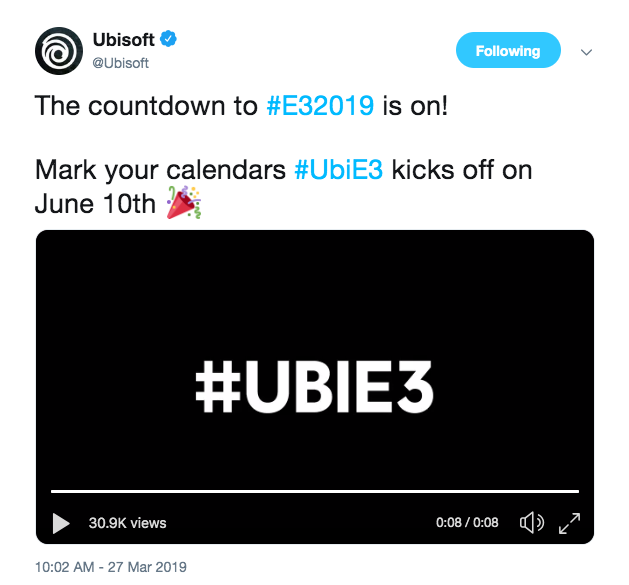 The teaser video included clips from their last E3 showing, highlighting Just Dance 2019, their presence on the E3 show floor, and last year’s press conference. No other references to the company’s flagship franchises were included, but the studio currently has several games on the horizon, including Skull & Bones and Beyond Good & Evil 2.

Ubisoft has already had a full 2019, as well, with the release of Far Cry: New Dawn and The Division 2, as well as the final DLCs for Assassin’s Creed Odyssey. Whether we’ll see more information on other series updates like Watch_Dogs 3 or Ghost Recon is up in the air, but we’ll likely get updates on the studio’s forays into the entertainment world. Ubisoft recently announced that Skull & Bones will get its own TV series, and that even Just Dance is getting a movie adaptation. We’ll keep our fingers crossed that it follows the steps of The Division movie if it manages to “break the video game movie curse” as its director hopes.

You can keep track of all of the press conferences and games that will be appearing at this year’s E3 in our E3 2019 wiki.

JR is IGN’s Senior Features Editor, and really hopes WD3 is announced and coming soon. If that happens, he’ll probably freak out about it on Twitter.