Like Nintendo’s previous Labo kits, the initial focus of Labo VR is on cardboard construction and customization. And while interlocking large cardboard sections or putting the finishing touches on a project can be highly satisfying, the sluggishly paced instruction videos and countless steps involved can quickly turn the building aspect of Labo VR into a chore. The Labo accessories you’re prompted to build are sturdy and well engineered, but you’ll likely never come away from putting one together with the hope that your build time had last longer.

I did find myself suffering from fatigued arms and eyes after exploring Labo’s VR environments for extended periods.

But the Labo series’ somewhat monotonous building slog is old news; the real star of the show in Labo VR is, well, the VR. Nintendo achieves this technological feat the same way Google did with its Android phone-powered do-it-yourself VR viewer: by including a special pair of plastic lenses that create the illusion of a virtual world around you when the Switch is inserted into the cardboard headset. Unlike most VR headsets, Nintendo has forgone a head strap of any kind, forcing you to hold the Labo VR goggles against your face during play. Though the integrated head tracking and motion controls work well enough with this setup, I did find myself suffering from fatigued arms and eyes after exploring Labo’s VR environments for extended periods of time. The tiring combination of holding the head set while you gaze into it may be intentional, as it forces you to take occasional breaks – a recommendation Labo VR isn’t shy about promoting.

As one might speculate based on the Switch’s modest undocked specs, Labo VR’s headset display is quite the step down in terms of visual quality when compared to normal handheld gameplay. As it turns out, positioning your retina two inches from a 720p screen (which is split in half to give each eye a unique view) can cause blurry visuals and some uncomfortably noticeable pixels. This is known as the screen door effect, and Labo VR suffers from it at almost every turn.

The simple Labo VR Headset is a jumping-off point, a gateway to the five other Toy-Con projects included in the kit. Each project is built to work in tandem with the Headset, most times attaching to the front of the goggles. Like the original Labo Variety Kit, some projects can bring hours of entertainment while others fall flat after their first go-round.

Constructing the main VR Headset unlocks a crowded corner of the Labo VR software known as VR Plaza, where 64 mini-games are showcased. Many of them pair with a specific Toy-Con project or bonus cardboard doodad. The initial dozen or so mini-games are simple concepts that allow you to get a feel for different environments and gameplay. Drive a car, throw a boomerang, fill a silverware drawer with mustard – it’s all in good fun. Not every mini-game or mode in Labo VR is going to hold your attention for an extended period of time, but many may, and experimenting with all the different options is fun in its own right.

Kablasta, the Blaster’s second game, is the best fruit-shooting simulator since Donkey Kong 64.

The most complicated build, the Toy-Con Blaster, provides a quick-firing arcade experience. The main game, known simply as Blaster, revolves around fighting off an invading alien horde. The heft of the blaster in your hand, coupled with the constant cocking and firing motions, really add to the illusion that you’re annihilating wave after wave of slimy space creeps and hulking bosses. Unfortunately, Blaster looks the worst of any Labo VR game because it involves lots of quick movement from both you and the enemies around you. Levels can get blurry in a flash, and that effect often left me momentarily disoriented.

Kablasta, the Blaster’s second game, is the best fruit-shooting simulator since Donkey Kong 64. You and a friend take turns convincing a pool of hungry hungry hippos to swim to your side by launching different types of fruit into their gaping mouths. There’s more strategy involved than you might think, and it’s easy to get caught up in luring the mighty mammals to your side of the pool. Kablasta is a weird, yet immediately accessible concept that finds a way to make pass-and-play with VR worthwhile.

Two of the stranger pieces in the Labo VR set include the Bird and foot-operated Wind Pedal Toy-Cons, contraptions that unsurprisingly work hand in hand (or perhaps hand and foot). On its own, the Wind Pedal gives you the option of playing as a leaping frog in Hop Dodge. The gust of blowing air put off by the pedal with each push is an odd, but exhilarating sensation, and it was hard to help from smiling as I jumped further skyward with each blast.

The Wind Pedal isn’t required for the games centered around the Bird Toy-Con, but it does add some fun realism and much-needed speed to both. The aptly named Bird Mode puts you behind the controls of a bizarre bird cyborg on a mission to find and feed all the baby chicks hidden across a peaceful island. Squeezing the sides of your cardboard bird device in the real world causes wings to flutter in both realities, taking you to greater heights. The fast-paced Bird Dash drops you on the same island and challenges you to fly through a string of hoops as fast as possible. The exploration is relaxing and scenic, while the hoop racing is more about increasing your speed and improving your high score. Both modes are pleasant and offer a good deal of content to work through.

The most awe-inspiring and enjoyable Toy-Con project is easily the Elephant.

The most awe-inspiring and enjoyable Toy-Con project is easily the Elephant. It’s main mode, the one I spent the most time playing and showing others, is simply known as Doodle. The Joy-Con located at the end of your Elephant’s trunk uses its IR sensor to measure depth, allowing you to draw and sculpt in a 3D space. Different colors, effects, and lighting can also be added to give your sloppy sketch just the right look. It’s legitimately hard to put down, especially when you get a friend involved in the goofy multiplayer game Guess the Doodle.

Outside of Doodle, the Elephant Toy-Con introduces Marble Drop, a simple and addicting puzzle game based around guiding a marble over and through various obstacles. Like Doodle, it’s the realistic depth that really adds to this mode’s fantastic sense of immersion. With 100 premade puzzles and the ability to craft your own with a well-stocked level editor, Marble Drop is another Labo VR experience that can easily steal away hours of your time.

The least impressive project, from both a visual and interactivity standpoint, is by far the Camera. The two main Play modes, Ocean Camera and House Camera, are so basic that even the slight thrill of zooming in on virtual objects for the perfect snapshot is quickly dulled. Though each mode gives you certain sea life or poses to capture, it can be tedious to wait to see them appear. Only being able to take three pictures at a time doesn’t help, and lands the Labo VR camera at the bottom of the pile in terms of lasting replay value.

Lookin’ Down On Creation

As each Toy-Con project is successfully assembled, Labo VR unlocks both VR Plaza games that work with it and interactive notes about the Toy-Con’s inner workings. What’s really special about VR Plaza games is that they’re all creations made within Labo VR’s interactive game-building mode, called Toy-Con Garage VR. The original Toy-Con Garage was my favorite part of the Labo Variety Kit, allowing anyone to engineer their own cardboard toys and gizmos. Garage VR expands upon this idea by allowing you to engineer not only basic inputs and outputs, but your very own virtual reality games. 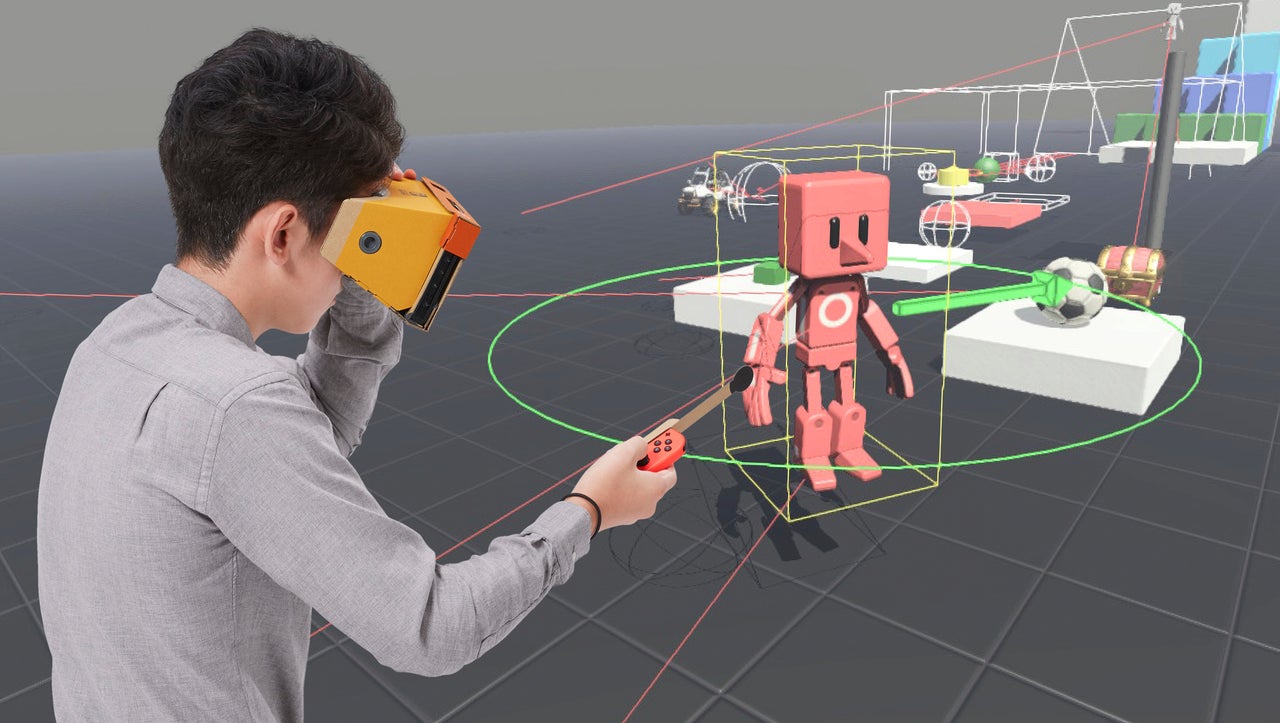 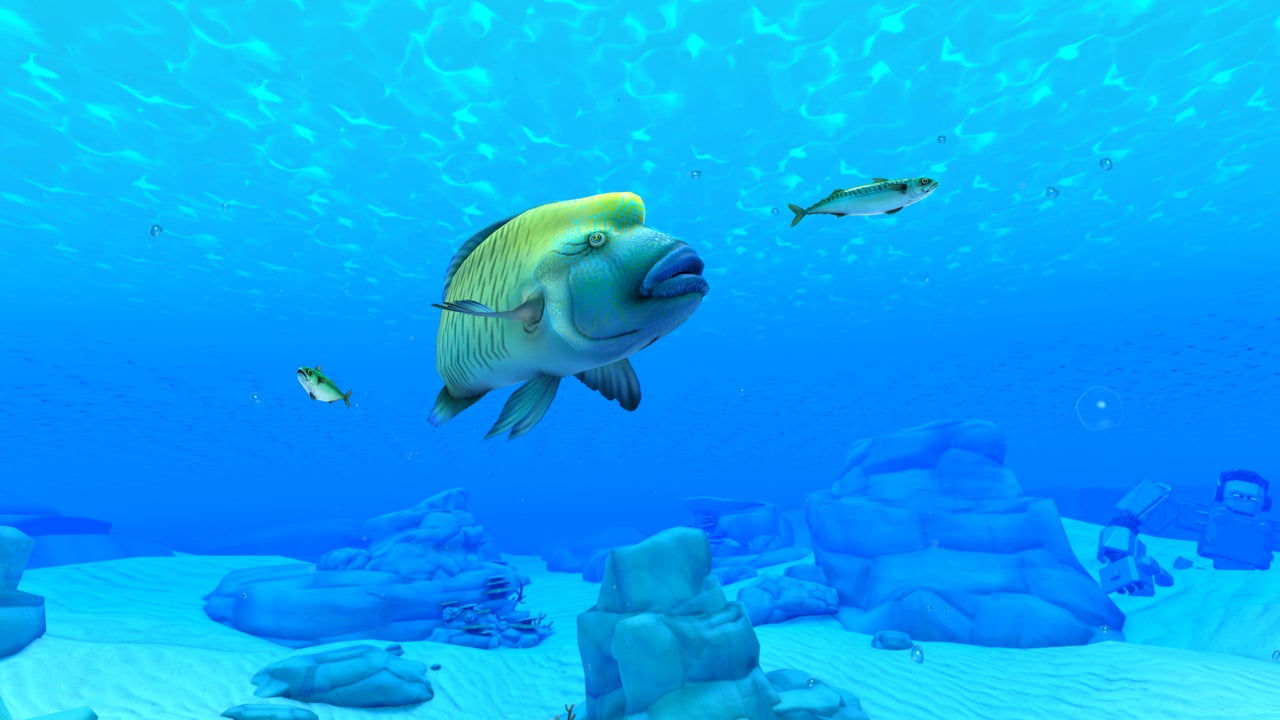 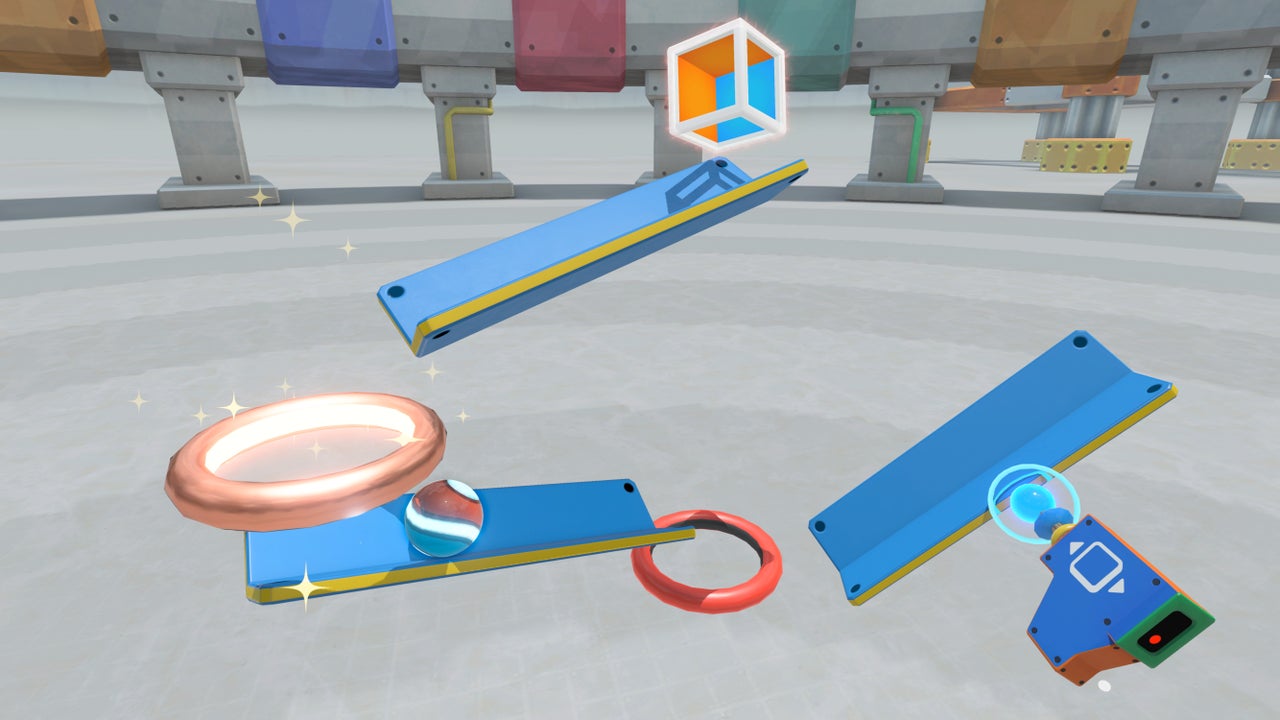 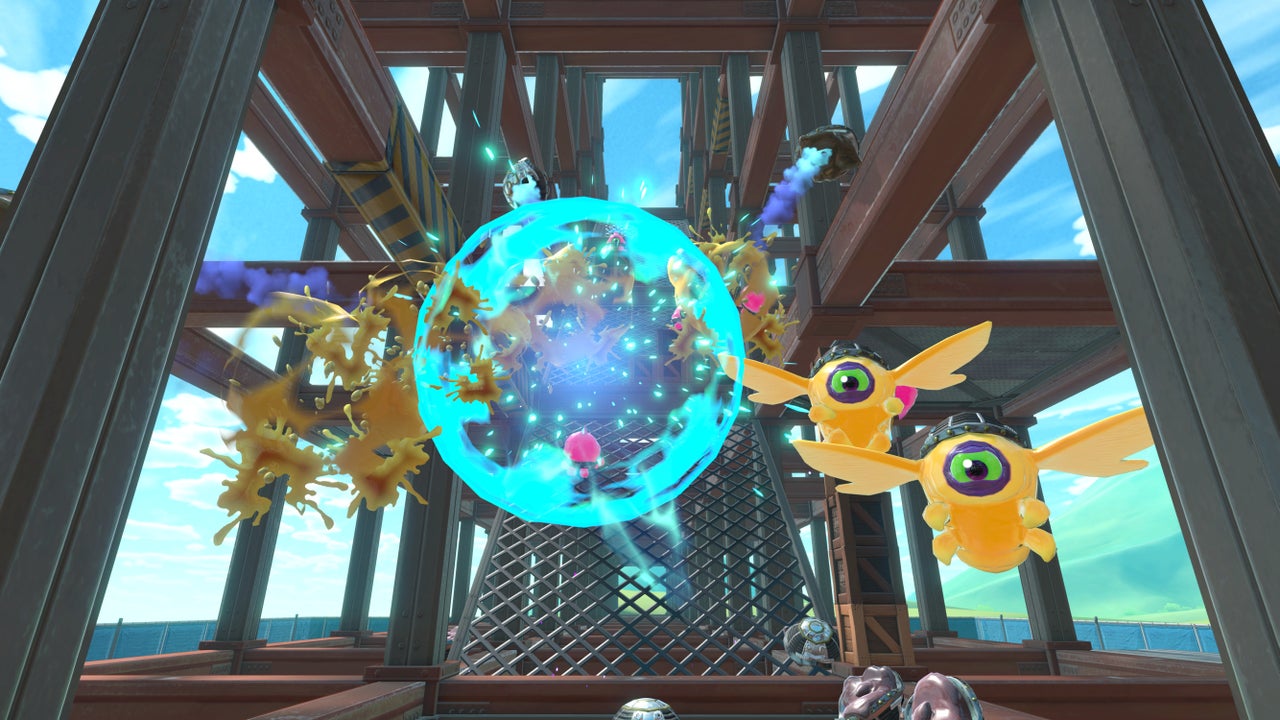 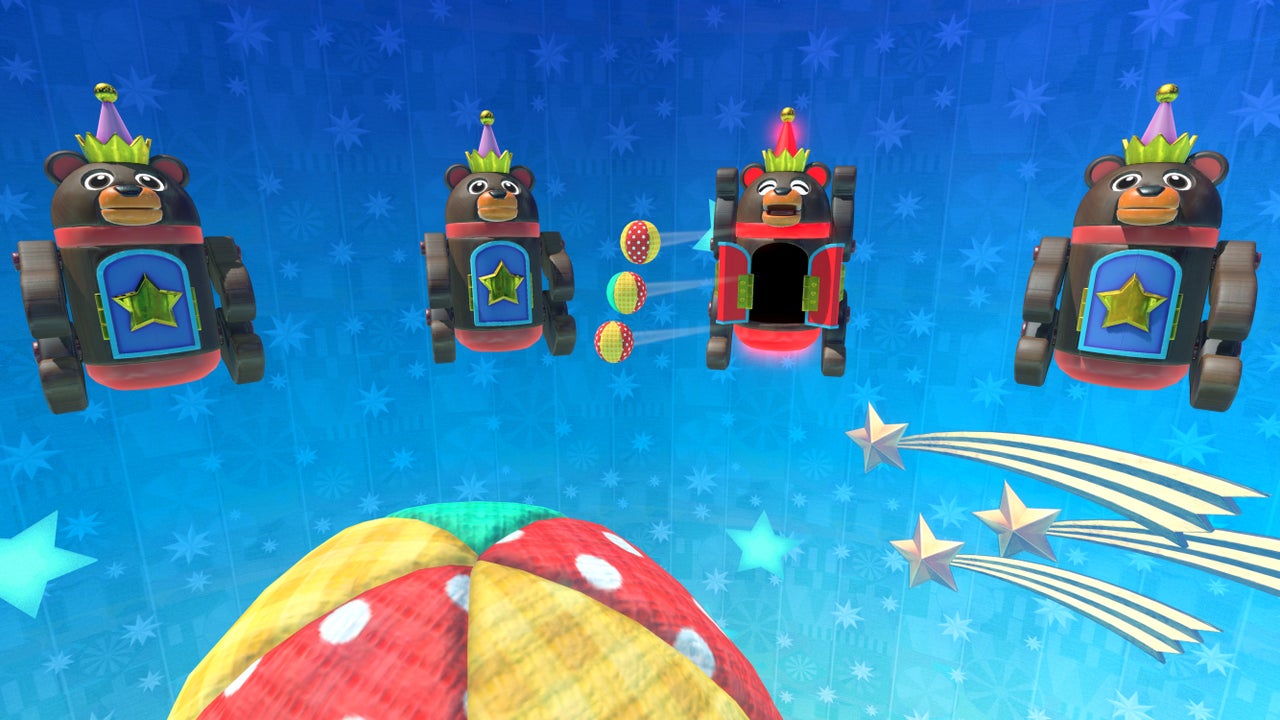 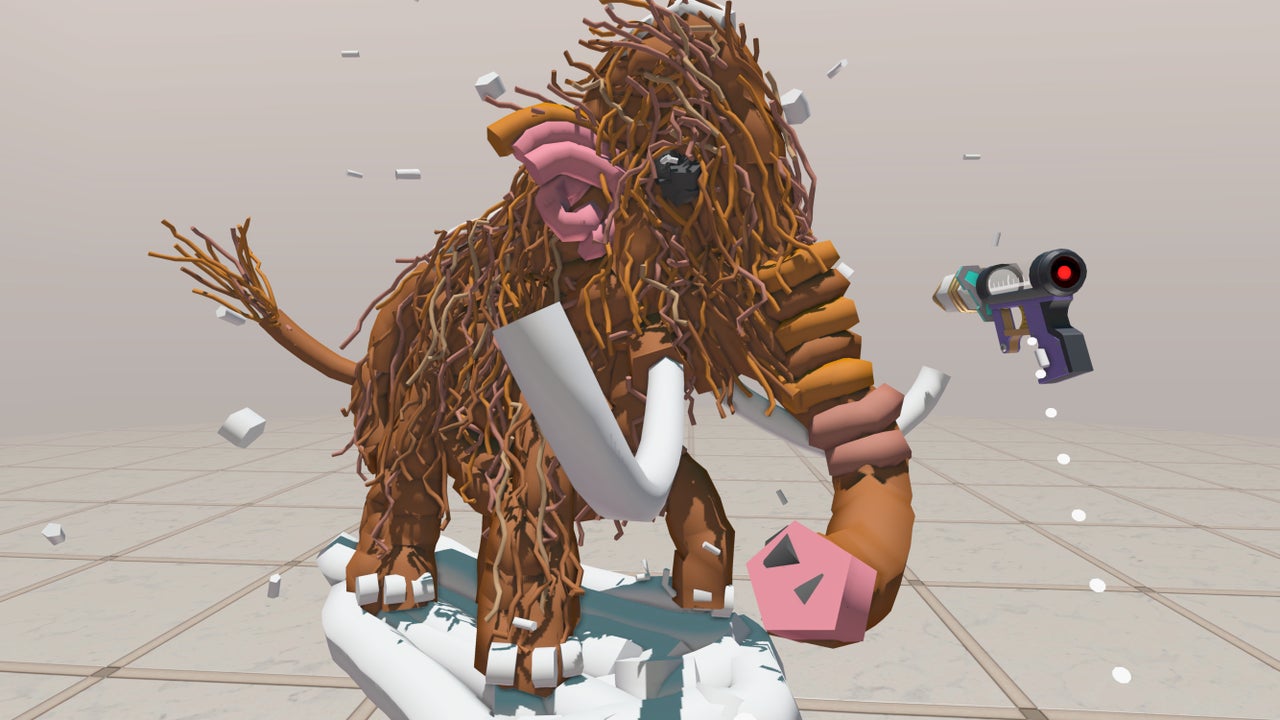 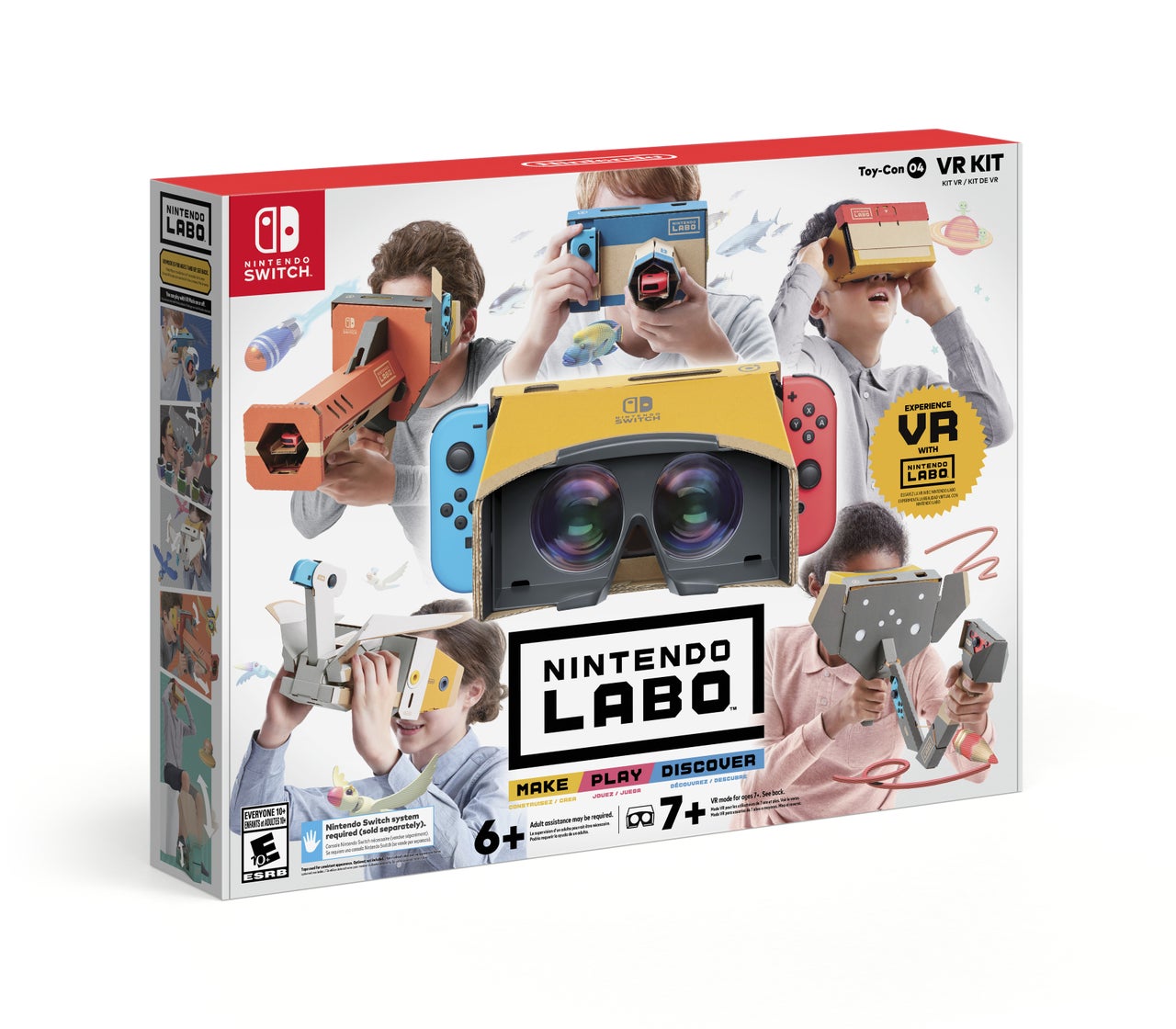 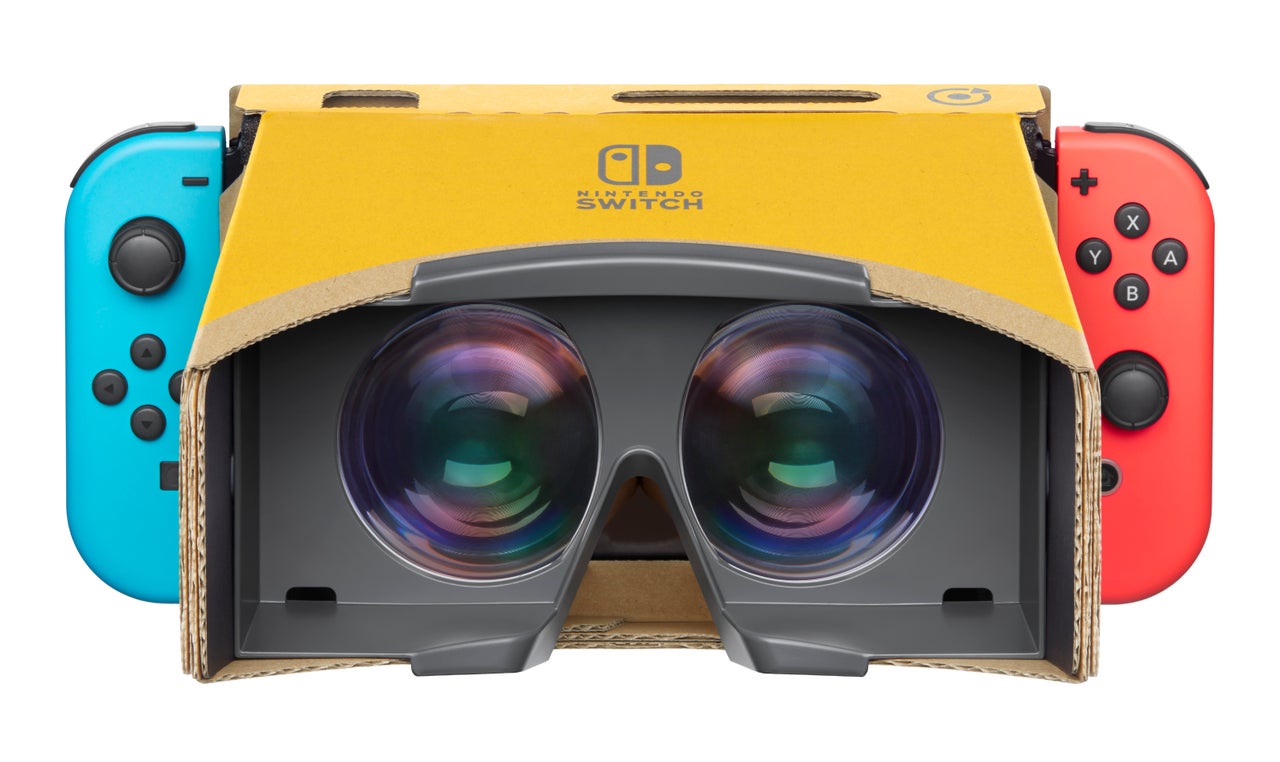 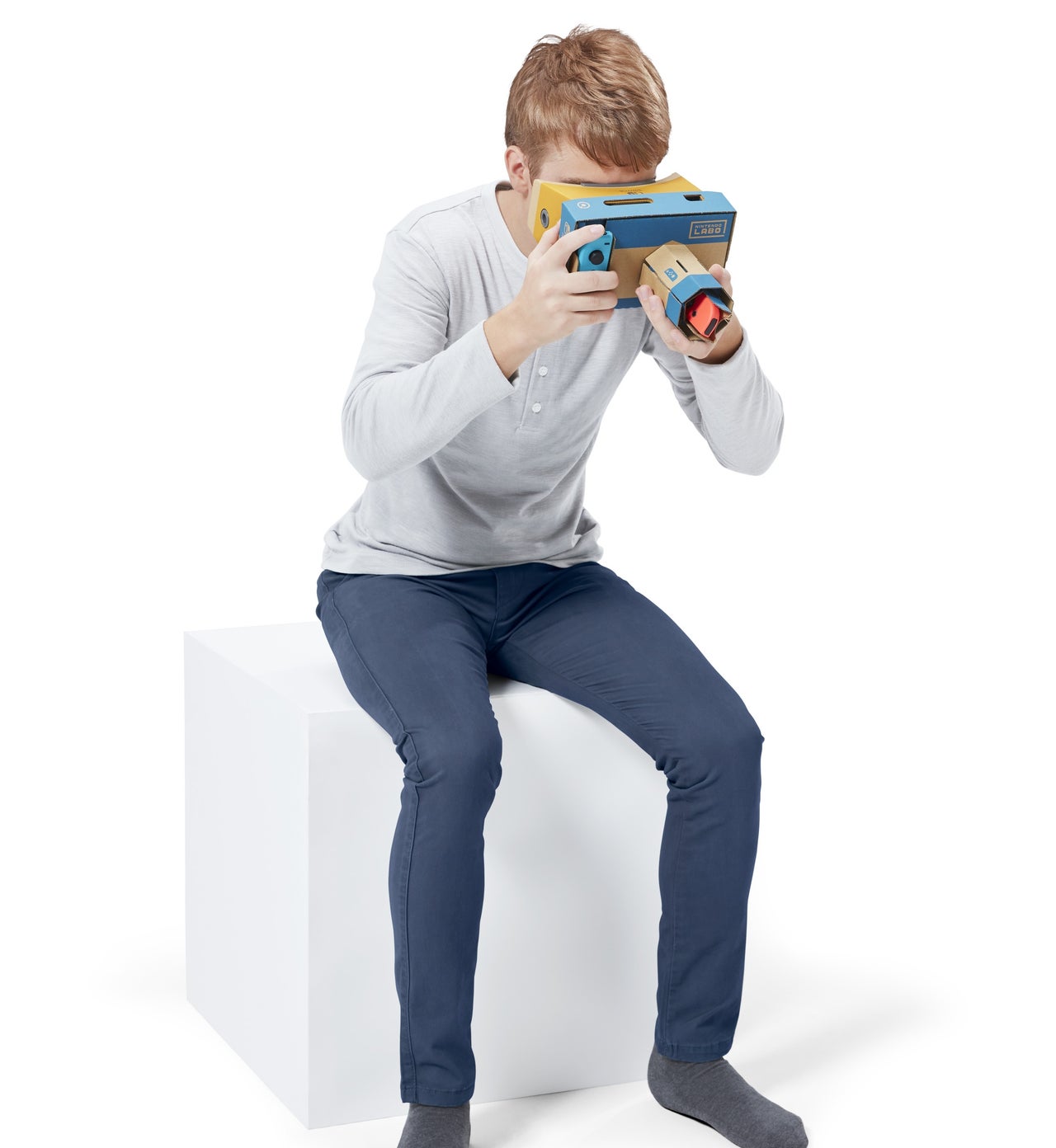 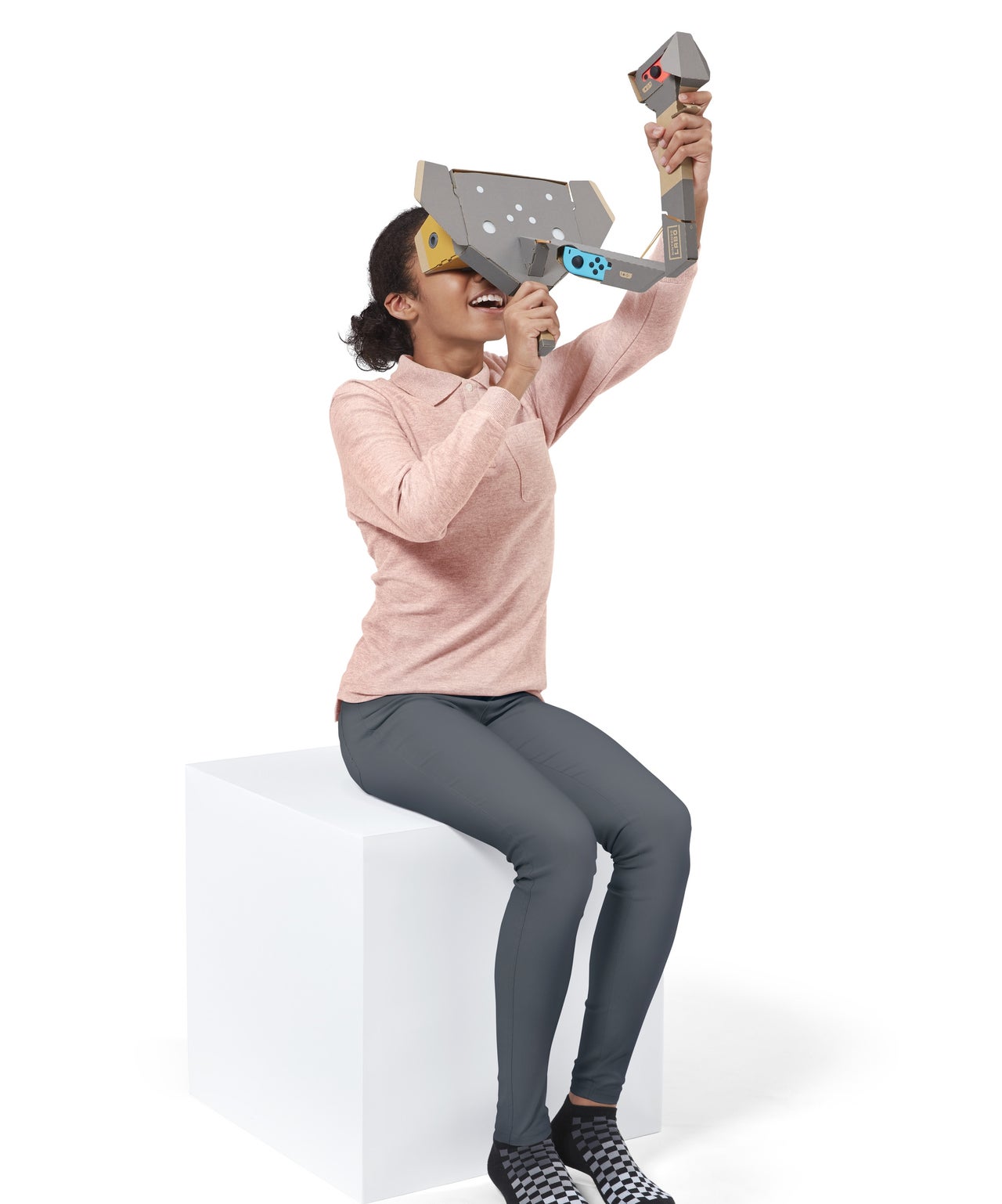 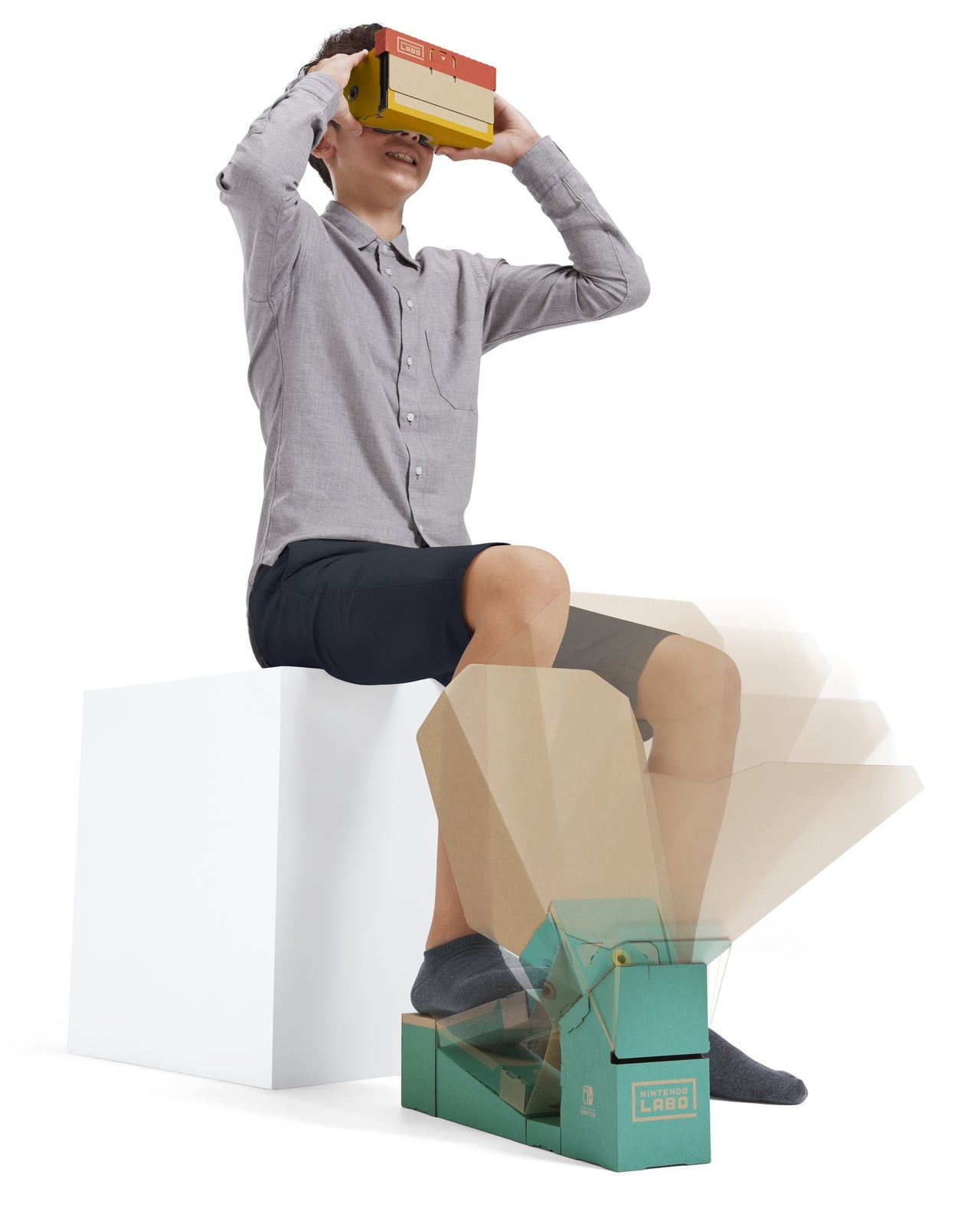 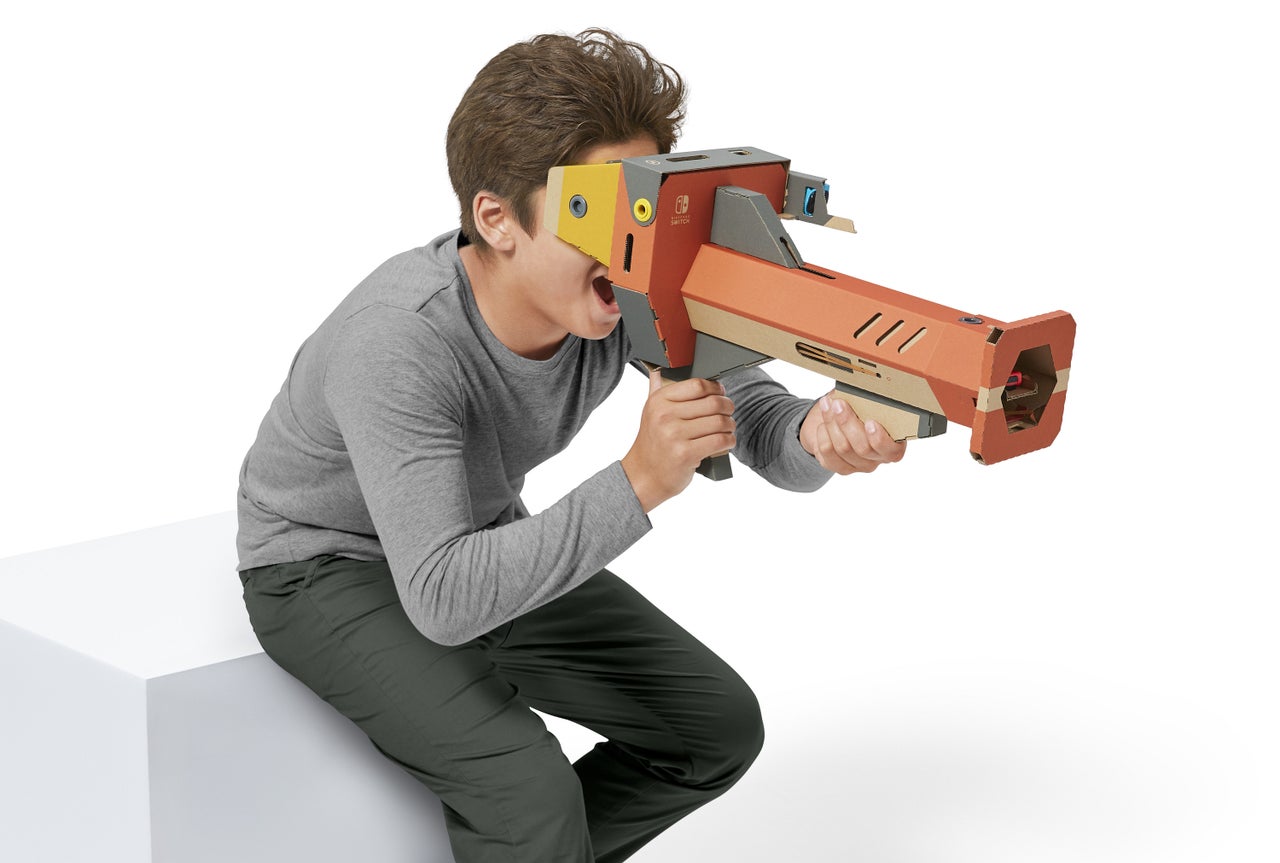 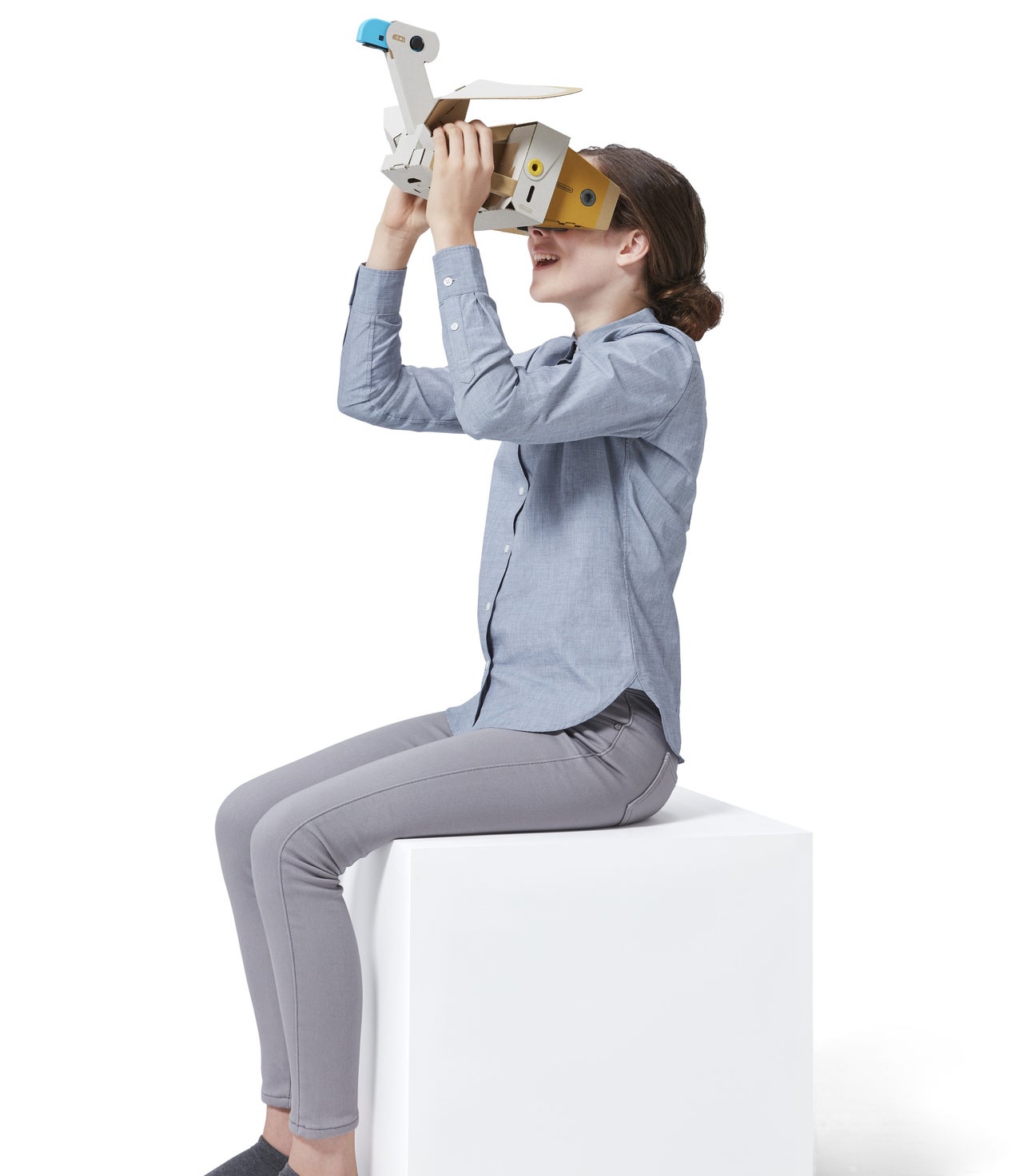 The depth of creativity found in Toy-Con Garage VR is astonishing, giving you the ability to cobble together games based around racing, rhythm, fighting, and more, but it still suffers from a few major setbacks. The most glaring is the fact that even while you’re given the tools to edit both your game’s underlying mechanics and 3D environment, it’s short on tutorials to help you surmount the decidedly steep learning curve involved. That’s to be expected – after all, you’re programming a game. But even when simplified, that’s no easy feat to get started. It should be noted that every game in the VR Plaza can also be edited and used as a basis for your own creation – all you have to do to look under the hood is pause and select which kind of editing you’d like to tinker with, 2D for connecting basic interaction framework and 3D for setting the right scene. But this ability sometimes aggravates the issue of complexity by dropping you into an overwhelming maze of interconnected programming nodes and perfectly places models.

Still, the tools and the potential are there. If you’re clever or patient enough, Toy-Con Garage VR gives you plenty to work with and loads of opportunities to craft whatever kind of game you like. Completing a game creation leads to the second major issue with Labo VR’s creative side – an inability to share the fruits of your labors with others. With no online capabilities, even the most impressive player-made VR games won’t get much recognition or well-deserved play time if they can’t be downloaded by others. There’s always the chance that Nintendo could update Labo VR with some kind of games showcase in the future, but knowing the company’s aversion to online innovation (and the fact that it never did this for the previous Labo kits) the chances seem slim. If you and those who are physically close enough to put their faces in your Labo VR are the only ones will ever experience your creations, it makes the idea of investing so much time in learning to use these complex tools seem like wasted effort.

Labo VR is Nintendo’s most innovative and creative Labo kit to date. It can’t compete with the top-dollar VR available on other platforms and it’s tiring to hold it up to your face for more than an hour at a time, but it still includes plenty of wacky and wonderful Nintendo magic, best exemplified by the Elephant Toy-Con.