Last week’s incredible Mario Day sale event has come to a close. If you missed it, there was a brief window of opportunity where you could pick up a Mario game for Nintendo Switch for just $40. The other part of the sale was the $329 Switch and Mario game bundle. The good news is that deal lives on in at Walmart and it’s even better than it was before.

Looking for some games? Check out the latest Nintendo Switch game deals and save on some of the best

Buy a Nintendo Switch, Get NBA 2K19 for Free

Just when it looked like the best Nintendo Switch deal was ending, Walmart goes ahead and pulls this one out of its magical Walmart hat. If you choose Super Mario Odyssey with this bundle (and honestly, why wouldn’t you?), you can get the whole thing for just $328.53. The most you’ll pay with this bundle is $337.88. On top of that, you get the cool enamel pin and a Paw Patrol Nintendo Switch carrying case. If you don’t have kids you can just rock the case ironically. 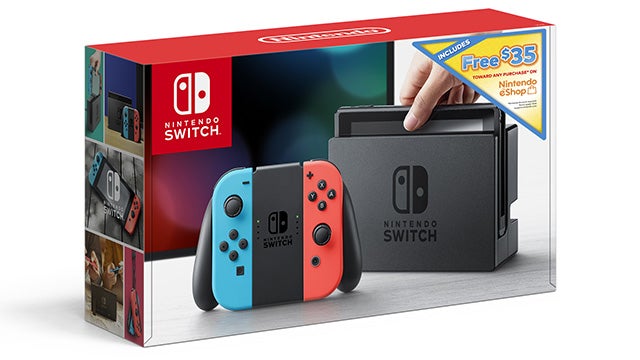 Finally, a long-term Nintendo Switch deal with some teeth. There hasn’t been a truly great Nintendo Switch deal since the Mario Kart 8 Deluxe Black Friday bundle. This eShop bundle isn’t quite as good, but it’s still pretty stellar. You get your choice of grey or neon red/neon blue Nintendo Switch consoles for $299, and Nintendo throws in $35 eShop credit right off the rip to get you going. There are tons of great Nintendo Switch games on eShop for you to spend your credit, or you can apply the credit toward the purchase of a fully-priced game and save $35 instantly. Go crazy! The world is your oyster.

This remains a good deal on a new Nintendo Switch, especially since you get not one, but two games packed in. Mario Tennis Aces is a ton of fun, and is a perfect pack-in for new Nintendo Switch consoles. The launch-era 1-2 Switch isn’t quite as delightful as Mario Tennis Aces, but it has some definite high points: it’s fun at parties and it’s essentially free with this bundled deal. Since this bundle is at Walmart, you get free 2-day shipping on it, too.

This doesn’t save much, but it’s a good way to expand your Nintendo Switch storage without having to do much thinking. It’s also a perfect bundle if you’re giving someone a Nintendo Switch as a gift. People who haven’t been in the video-game sphere for a while still think of consoles as needing memory cards, and the Switch branding on this SanDisk Micro SD card removes any doubt as to its compatibility.

The Nintendo Pro Controller is listed at $69.99, and even at full price I’d recommend it. Thankfully, it HAS come down in price since its introduction. It’s not at its lowest-price ever, but it’s at what appears to be a pretty stable discount.

These aren’t on sale, but they’re a fast and easy way to start filling up your new Nintendo Switch with games.

Seth Macy is IGN’s tech and commerce editor. Find him on Twitter @sethmacy.