Even before starting Fire Emblem: Three Houses, I knew there would be a point in the game where everything would change. The first chunk of the game is spent getting to know students across classrooms, with plenty of opportunities to build friendships, allegiances, and maybe even develop some romances. But the second half, after a five-year time skip, is where the politics surrounding these characters threatens to tear everything apart.

[Warning: Spoilers for Three Houses ahead!]

I knew this; it’s the basic structure of the game, sure, but more than that, the time skip has become a driving force behind how players approach Three Houses. In the same way that a Pokémon player might look up version exclusives, Fire Emblem fans tend to look up the effects of the time skip before choosing a house. The time skip changes the appearance of your classmates, so players want to ensure they’ve picked a house that will produce a group of cool-looking characters.

Hell, as a journalist whose job it is to know things in order to cover them effectively, I was even aware of the big twist at the heart of the time skip: Edelgard betrays everyone, and crowns herself the emperor.

None of this knowledge mattered. When the time skip hit, I was faced with one of the most disturbing and effective moments I’ve experienced in a video game this year. 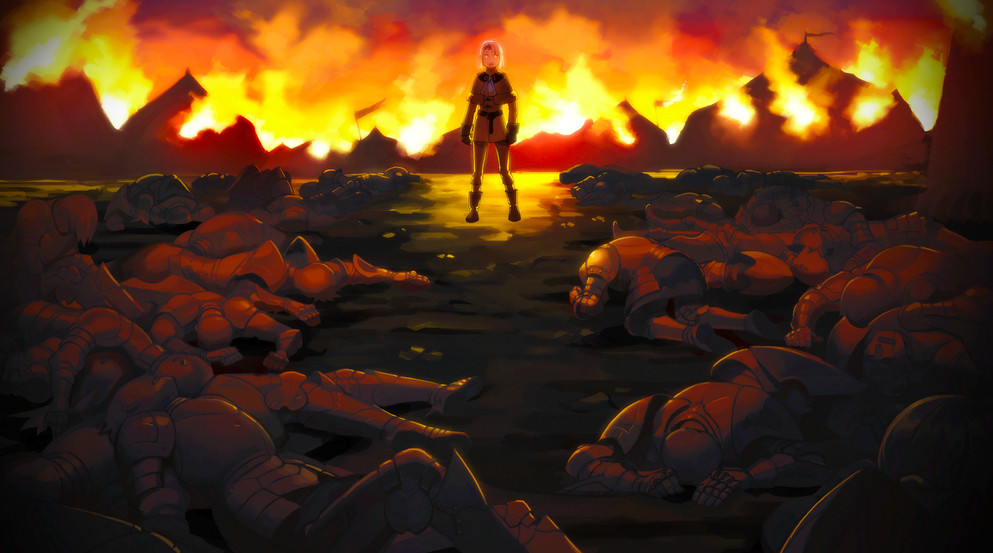 The particulars of the time skip are different depending on the house you pick, and in my case, I’ve been carrying the Blue Lion banner. Early on in this playthrough, I learned that Dimitri, the prince of Faerghus, has a tragic past. The blond royal loses his family in a massacre, and the incident comes to define his life.

For the most part, Dimitri emerges from this experience with a shockingly idealistic attitude. The boy clearly cares about being a thoughtful leader, and he spends a lot of his time training to become stronger so he can help others. But there’s a shadow lingering behind Dimitri throughout the first section of the game, too. It’s easy to miss, but if you get to know Felix, one of Dimitri’s childhood friends, you’ll note that he keeps calling Dimitri a boar. Dimitri, Felix insists, changes on the battlefield. It’s not just that Dimitri is good at killing. It’s that Dimitri seems to revel in the violence, at times resembling more a beast than a man.

I didn’t quite see it at first. Felix is dramatic and not exactly a people person, for one, but also, having spent so much time with Dimitri — Three Houses is an incredibly long game — I wanted to believe he’s a good guy. I mean, this is the guy that eats ice cream with me in the mess hall.

And then the time skip happens, laying bare the truth: Dimitri has never been fine. I mean, how could he be? He watched his loved ones die in cold blood; any sane person would probably lose a part of their humanity because of that. Dimitri just happened to be good at hiding his trauma.

But when Dimitri finds out that Edelgard is the Flame Emperor, one of the major villains who is seemingly responsible for killing innocents — the facade falls away. It’s not just that he finally has someone to blame for the death of his parents. Edelgard, of all people, is just too big of a blow. The two grew up together, and are technically stepbrother and sister. They go to school together. More than this, you also get the sense that maybe Dimitri is in love with Edelgard. The betrayal ends up breaking Dimitri. Much has been said about Three Houses’ difficulty level, but after this reveal, the ease in which Dimitri cuts down his opponents feels less like a shortcoming of the game than a testament to his bloodthirsty core.

When you see him again, Dimitri is a changed man. Gone is the idealistic boy, and in his place is a deeply troubled soul who cares for nothing but getting revenge for his family. You see this change in his design — he loses an eye, and his hair grows unruly. You also see it in his demeanor. Dimitri starts talking to himself, swearing that the voices of the dead are begging him to take Edelgard’s head. After spending so many hours with Dimitri, watching him lose that light is one of the most unsettling moments in an already heavy game. Characters in video games change all the time, to be sure. But usually, something this drastic either falls flat on its face, or I have to wait for a sequel to see such a long-term change play out. The fact that Fire Emblem can effectively pull this off over the course of a single game is astonishing.

Edelgard’s push for power affects everyone, of course. Many characters lose everything they have, are forced into exile, or have to fight for their lives. Fire Emblem seems intent on reminding the player that, even as we preoccupy ourselves with the fantasy of quiet schooldays, the realities of actual war are exceedingly grim. People you called friends may have stronger loyalties to their bloodlines, history, or class. Choices must be made. Lives will be lost. Ideals will be tested. Even those who make it out alive won’t come out the other end wholly intact. I haven’t finished Three Houses yet, but I’m already mourning who Dimitri has become.

Classic WoW: 10 Things You Can Do As Alliance

Monster Hunter World: Iceborne DLC on console and PC will sync up in April

PlayStation 2019 Infographic Shows Your Most-Played Games
We and our partners use cookies on this site to improve our service, perform analytics, personalize advertising, measure advertising performance, and remember website preferences.Ok