With the debut of AMD’s 16-core Ryzen 9 3950X, Intel’s slim lead in gaming CPUs could disappear. Announced Monday by AMD CEO Lisa Su at her keynote at E3, the company also claims that its new stack of 7nm-based Ryzen 3000 chips are competitive with Intel’s higher-clocked CPUs in games, and dominant in multi-tasking chores.

The big news, of course, was the long-awaited, much-whispered Ryzen 9 3950X. During her keynote, Su said the CPU, which will be available in September, features a boost clock of 4.7GHz with a base clock of 3.5GHz. The chip will sell for $749. 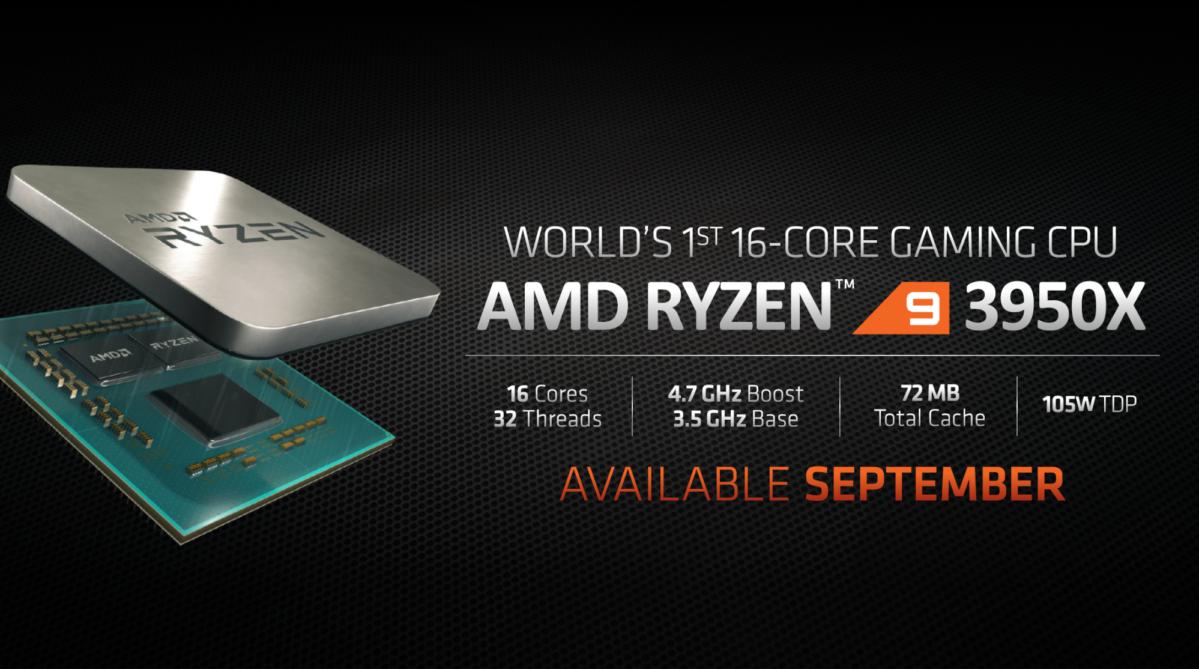 Besides a massive cache of 72MB, not much else was said about the Ryzen 9 3950X. But its arrival means that AMD has fully fleshed out its lineup that will take on Intel’s 9th-gen chips. 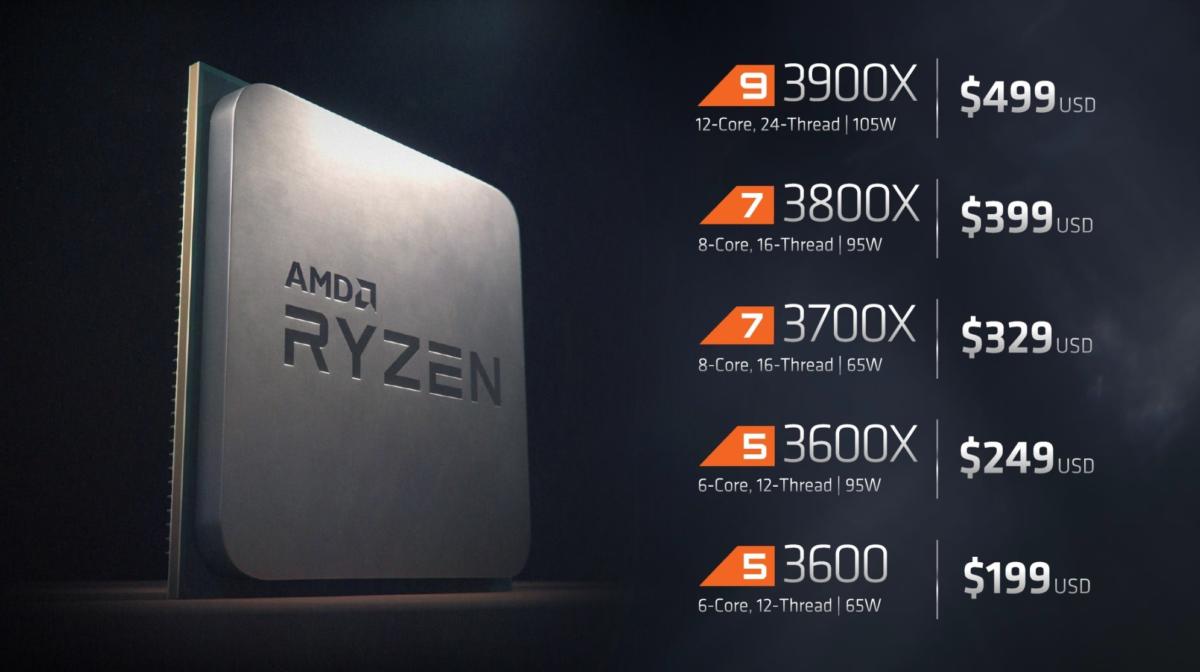 Here are the chips AMD will put up for sale on July 7.

What makes Ryzen 3000 so much faster?

Ryzen 3000’s performance increases don’t seem to come from just one single aspect, but an accumulation of changes between the Ryzen 3000 series and older Ryzen 2000 chips.

Obviously, one of the big advances is the process shrink from Ryzen 2000’s 12nm to Ryzen 3000’s 7nm. AMD officials said process shrinks typically increase wire resistance, as the wires literally get smaller. But the company has successfully gone against that and actually increased clock frequencies generations to generation. 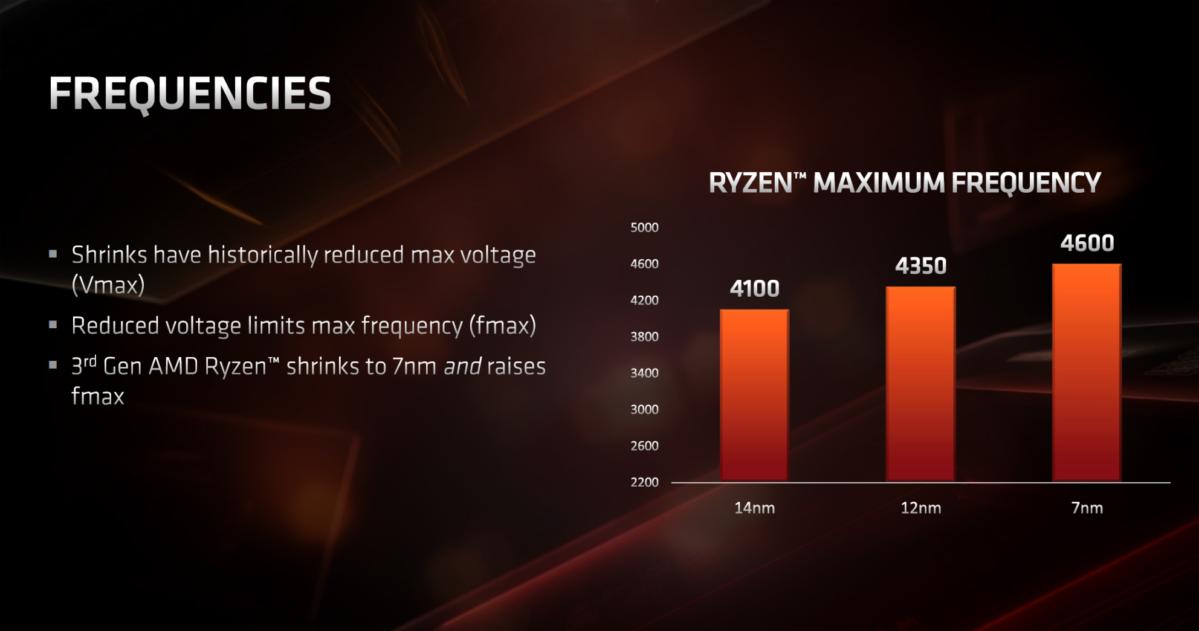 AMD said despite the difficulty of increasing clock speeds as you shrink chips, it has successfully done so for its 7nm chips.

The smaller process yields sizable power efficiency increases, too. For example, AMD said a Ryzen 7 3700X offers 75 percent more performance than a Ryzen 2700X in Cinebench R20 multi-threaded tests. During that test, the Ryzen 7 3700X consumes 135 watts at the wall, while the Ryzen 7 2700X demands 195 watts. 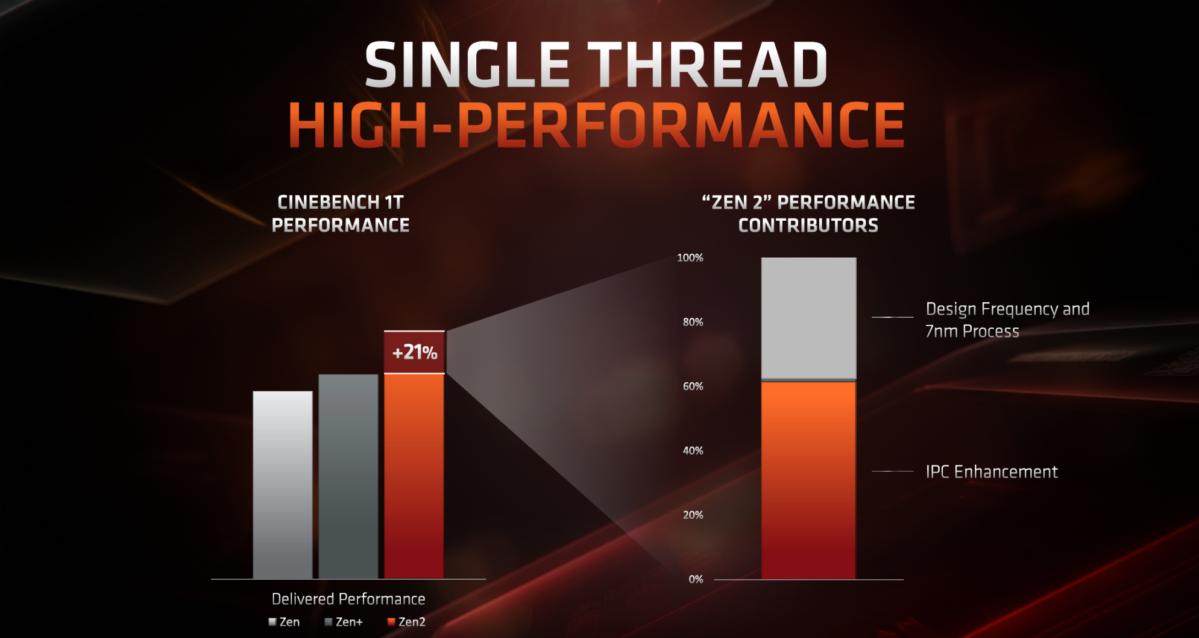 AMD said the Zen 2 cores yield a 21 percent performance increase over the Zen+ cores with roughly 40 percent of that coming from the process and and 60 percent of it from IPC improvements.

When companies move to a completely new process technology, they usually keep other aspects of the chips intact. In the move from 12nm to 7nm process, however, AMD took the additional step of redesigning the x86 core’s innards, adding a new front-end with improved branch predictor, better instruction pre-fetching, and larger caches. The 7nm Zen 2 cores basically feature double the floating point performance over 12nm Zen+ cores, yielding a 25-percent increase in performance for the same power as the Zen+ chip.

AMD has also worked hard to address one of the issues it’s had with memory latency. By moving from DDR4/2667 to DDR4/3600, many games yield up to double-digit performance bumps.

The other half of that comes from the CPU’s cache. With Ryzen 3000 chips, the L3 cache basically gets doubled in size. For example, the 12-core Ryzen 9 3900X features a whopping 70MB of cache. That all adds up to a sizeable boost in gaming performance, especially at lower resolutions, AMD said. 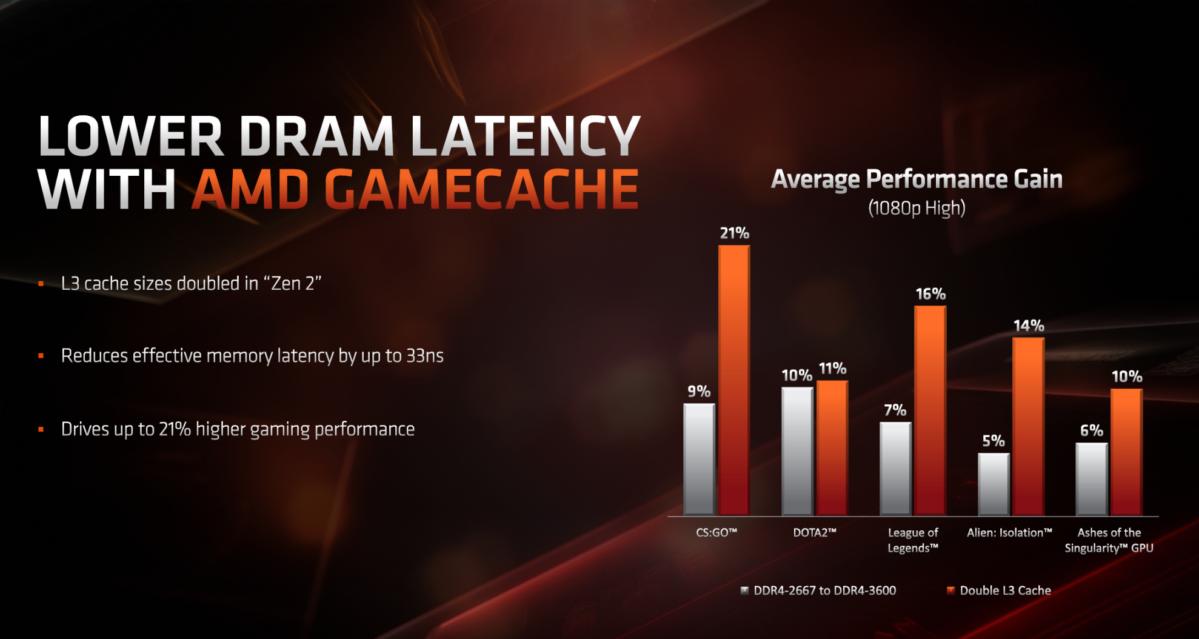 Maybe the Windows was broken after all?

One other advance for Ryzen 3000 (and perhaps all Ryzen chips) are new “optimizations” from Microsoft. When the original Ryzen was released, some of the performance, especially in gaming, was baffling. It didn’t take long for many to suspect that Windows 10 just didn’t know what to do with the multi-die package of the chip—specifically, how Windows 10’s scheduler dispatched work to the CPU cores. Many believed Windows 10 was willy-nilly sending work to cores on a different chip rather than the same chip—even if a CPU core was free on the same chip. (At the time, AMD actually came out and absolved Microsoft Windows 10 of any blame. But, frankly, it never rang true to us.) 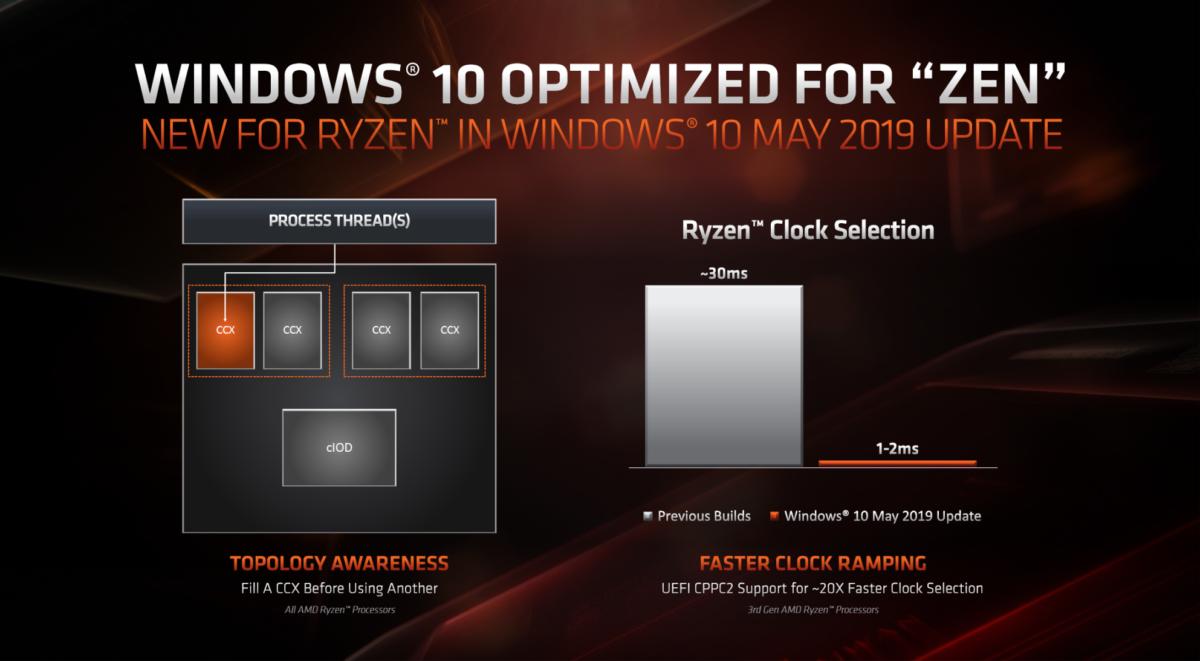 Windows 10 “optimizations” sound an awful lot like a fixed scheduler.

As of the Windows 10 May 2019 Update, AMD said optimizations to the operating system will dispatch work to adjacent cores on the same die first, which will greatly reduce latency.  AMD also said the May 2019 Update will bring faster clock ramping in its chips. With previous builds of Windows, AMD said it could take around 30 milliseconds for the CPU to ramp up to higher frequencies. As of the update (and with a new chipset driver) it’ll take just 1 to 2 milliseconds for the chip to reach its top speed. These fixes give some games a boost of 15 percent, while the faster clock ramping can yield 6-percent improvements. 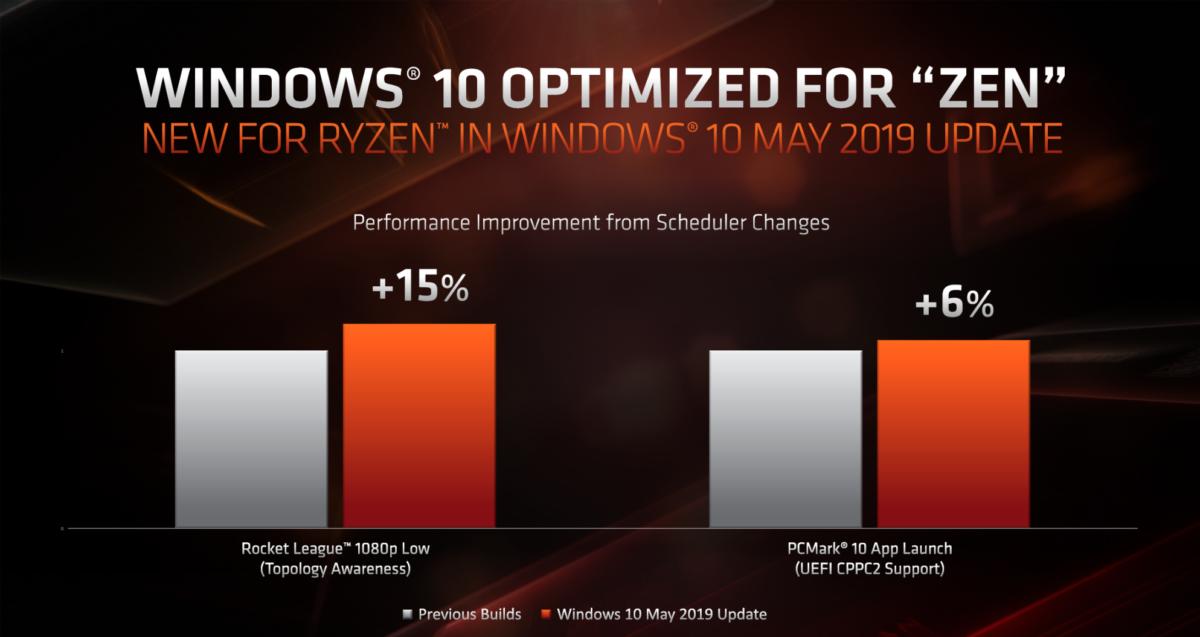 So what does this all mean? Gaming parity with Intel’s chips at last, AMD claims. At Computex AMD actually hinted at what the new chip could do, but for E3, it’s breaking out the gourmet stuff with gaming bumps at 1080p resolution competitive with Intel’s chips.

Yes, you heard that right: AMD claims gaming at 1080p is competitive with Intel. The resolution is important, because at the original Ryzen launch fans complained that testing at a “low” resolution of 1080p was unrealistic, unfair, and biased toward Intel. This was argued despite the fact that 1080p gaming is the most popular resolution among PC gamers today.

That didn’t change much with the Ryzen 7 2700X either. Gaming, especially at 1080p resolutions, has long favored Intel’s higher-clocked Core i7 and Core i9 chips by 15 to 20 percent generally.

If AMD’s claims are to be believed, that edge is now obliterated. Citing popular games  Call of Duty Black Ops, GTA V, Counter Strike: Global Operations, PUBG and Rocket League, AMD said the $399 Ryzen 7 3800X is basically dead even with the $409 Core i7-9700K. 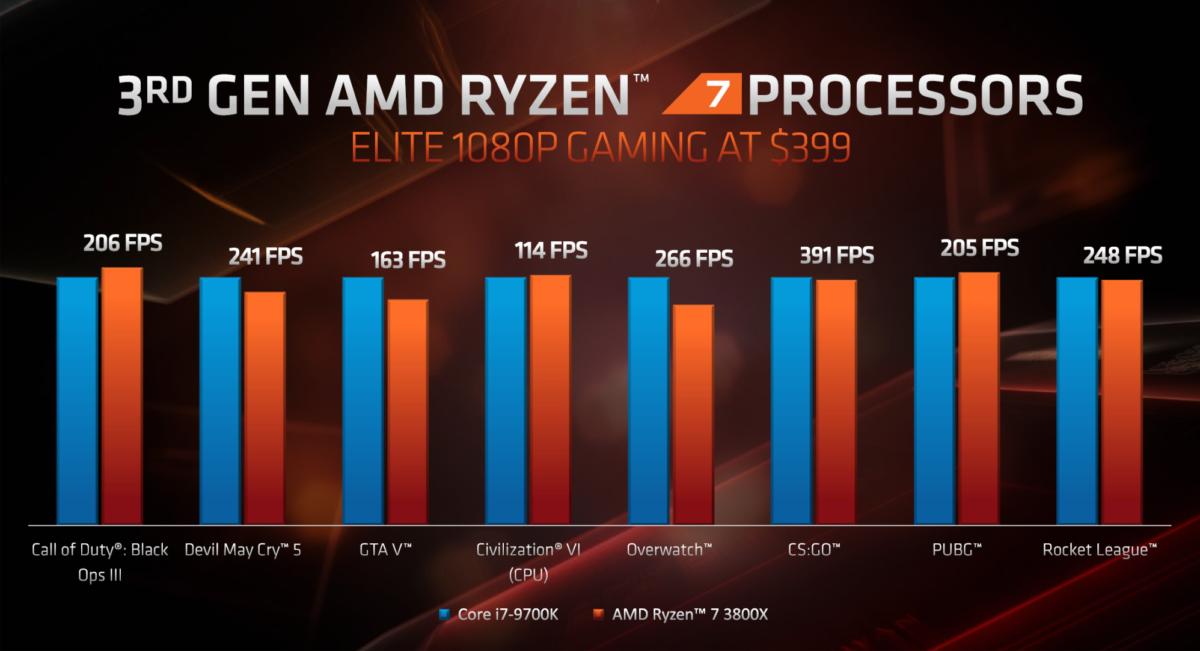 AMD claims it can stand tall with Intel’s chips in gaming, even at 1080p. 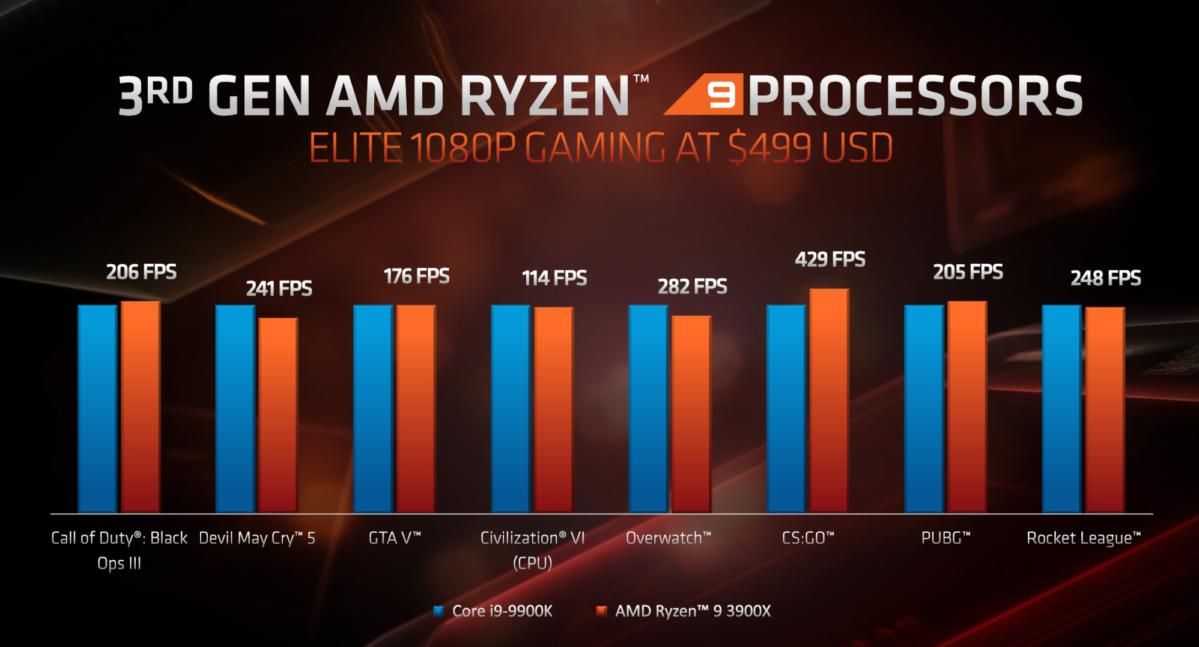 If AMD’s numbers are to be believed, the new Ryzen 3000 just took away the Core i9’s last defense.

These gaming claims are, of course, to be taken with a grain of salt, because no one has tested them independently. We have a few outstanding questions, but the main one is whether the Core i7 and Core i9 were tested with Multi-Core Enhancement turned on. MCE on Intel chips are themselves somewhat controversial. Some feel it’s “cheating” for Intel, because it automatically overclocks the chip beyond the stock guidelines.

Our own take in our Core i9-9900K review is more nuanced. Because MCE usually comes set to “auto” out of the box on most Intel Z390 motherboards, we test it set to off, on, and auto. All three produce different results depending on the motherboard.

With the Ryzen 7 2700X, AMD opted for MCE Off. The company confirmed it did the same with these benchmarks.

If you’re thinking AMD may be cheating by turning off MCE to make its chips look better, here’s something to chew on. Remember the “Optimized” Windows scheduler fix that bumped Rocket League’s performance by 15 percent?

All of the performance testing you’re seeing today, AMD officials tell us, are done without the updated Windows scheduler in place. AMD also tells us it didn’t install the latest security mitigation for Intel’s chips either.

So while MCE Auto would likely give the Intel chip more performance, the Ryzen 3000 probably would also see a bump in some games from the latest Windows 10 scheduler. 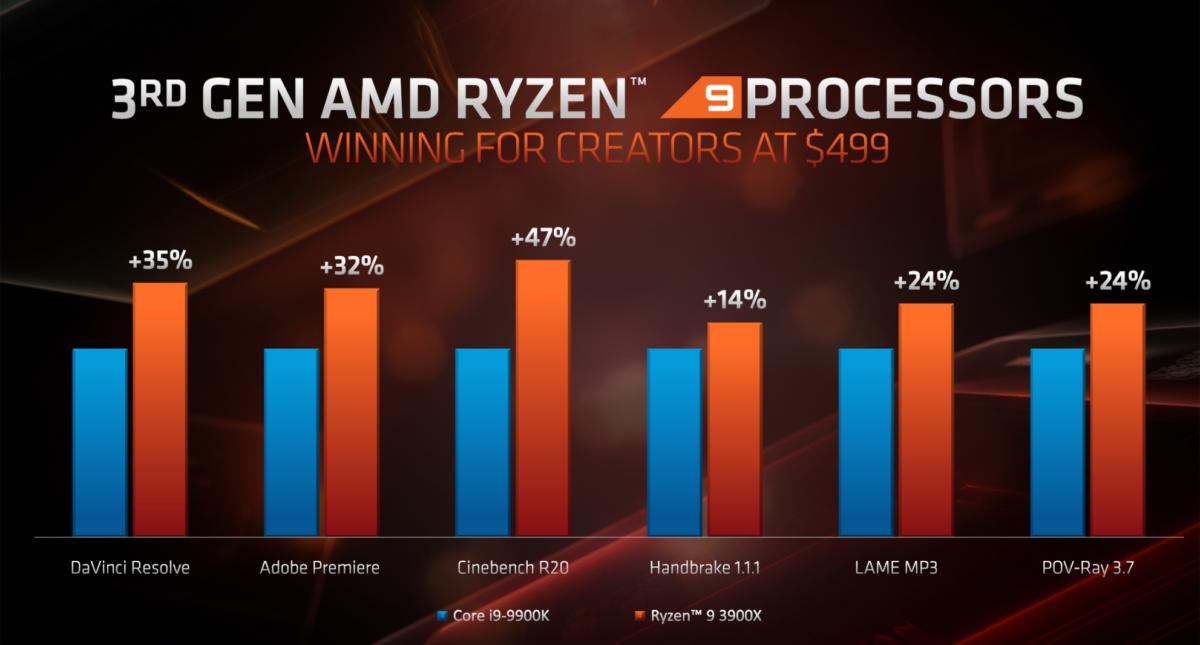 It’s crazy that we’re actually bored by how much faster Ryzen is over Core chips in multi-threaded performance.

One thing we didn’t talk about is the content creation performance of the new Ryzen 3000 chips. That’s because, frankly, it’s boring news. We should all know by now that a 12-core Ryzen 9 3900X is going to outpace an 8-core Core i9-9900K. We will run one benchmark chart from AMD to humor you, but from Ryzen 9 to Ryzen 7 and Ryzen 5, AMD has both core- and thread-count advantages over Intel’s Core i9, Core i7, and Core i5. In applications that really use all of those threads and cores, AMD wins 9 out of 10 times. So yawn.

What this comes down to, and why it now makes sense that AMD launched its Ryzen chips at E3 instead of Computex, is that the new chips may very well remove the only advantage Intel may have left: gaming.

Coming on the heel’s of Intel’s brazen challenge to AMD to stop showing only multi-threaded benchmarks and use “real-world gaming,” the gaming performance of these chips is really the only thing matters today from E3.

Obviously, you should wait for independent reviews to see if AMD’s claims are true, but the battle for the “best gaming CPU” and the crown is going to get really hot, really soon. 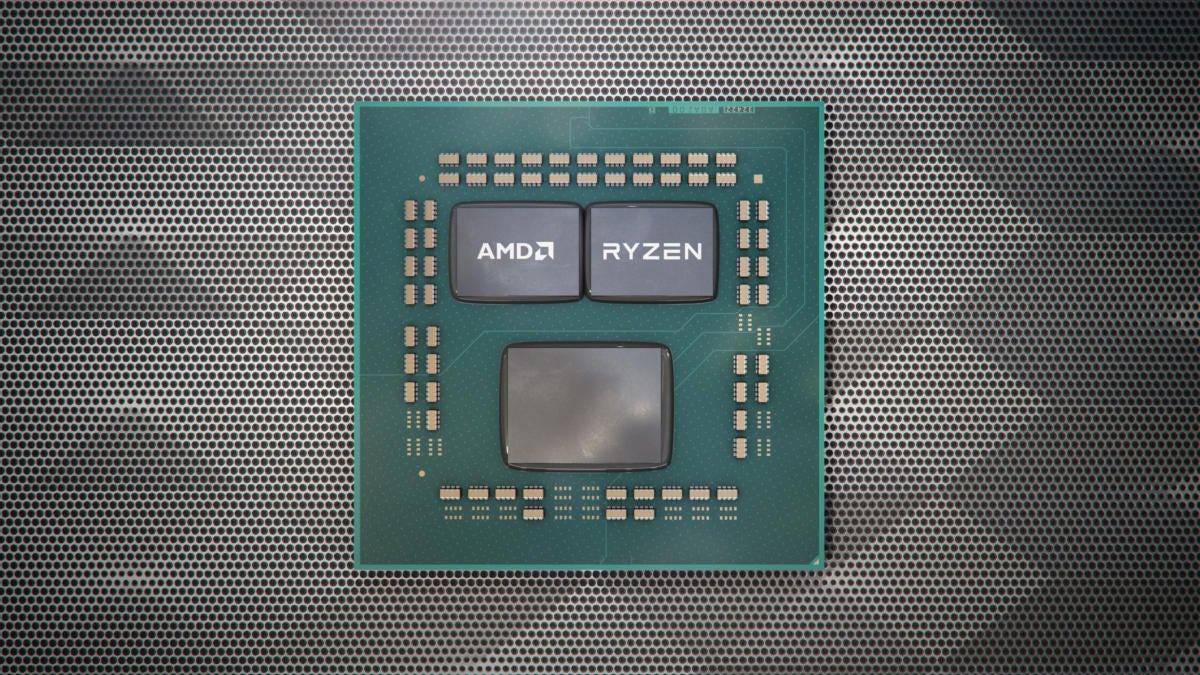